An Icon of the Kingdom of God: The Integrated Expression of all the Liturgical Arts

The liturgical art of the Orthodox Church offers the world nothing less than a vision of the Kingdom of God. There can be no higher calling for art than this. Liturgical art is the combined effort of apostles and theologians, hymnographers and composers, architects and painters, all manner of craftsmen, and the clergy and choir at every service, to reveal through so many arts the living reality of the Kingdom of God. 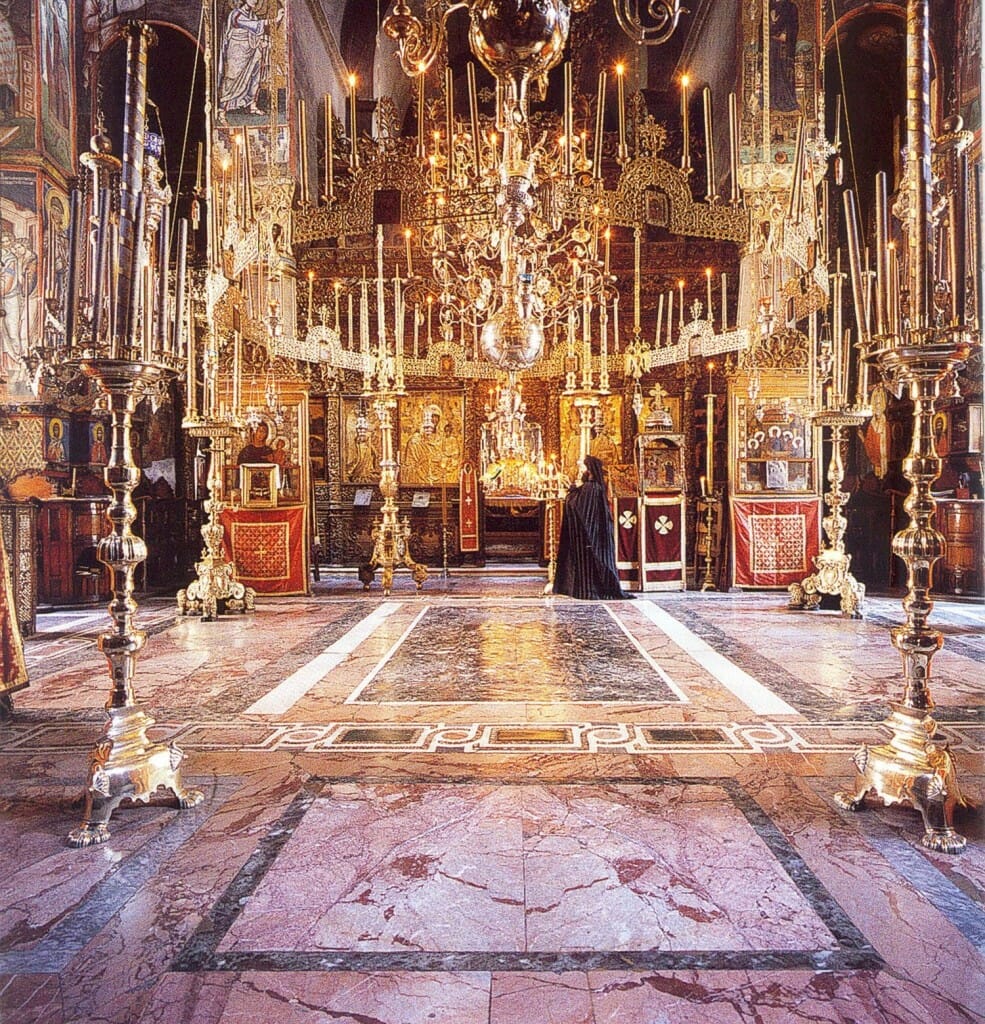 Yet despite the high calling of this service to mankind, and the immense complexity of this artistic interplay, liturgical art as an integrated whole has been little studied. Some academics have concentrated on sacred texts, others on musical traditions or icons, but there is little attempt to understand how each depends upon the others. Further, the ‘minor’ arts, such as liturgical furniture and textiles, are studied hardly at all, and few consider what role these arts play in expressing the fullness of God’s Kingdom.

Orthodox Christians, particularly in America, must develop a deeper understanding of the role of liturgical art. We have received the Orthodox Tradition in fragmentary form. Liturgical texts have come to us from the Old World intact, but the ancient architectural and iconographic traditions did not immigrate at all, thus requiring deliberate reconstruction through research. The music and ceremonial practices we have inherited need improvement, and the lesser arts survive today very sporadically, partially as sentimentalized traditions whose purpose is forgotten, partially as little more than ornament which is considered a dispensable luxury.

This broken history and the academic bias of the modern world have led to a certain imbalance. Sacred texts are treated with great importance in our seminaries, and churches make every effort to present them appropriately. But the other arts are often dismissed as mere decoration for the texts. Icons are understood as just another way of showing us what we already know from texts. Music is just a way to make hymnography sound pretty and dignified. And architecture, vestments, and furniture are only there to lend appropriate decorum and symbolism to a service whose real purpose is the worship of God through scripture and prayers.

This view is false. Sacred texts are not alone in expressing divinity. Everything in the world has the capacity to reveal God to us, and every form of liturgical art reveals God in its own way. An icon is holy because it shows us something uniquely visual about God’s Kingdom. It cannot be reduced to a system of symbols, a painted text. A melody bears meaning that is purely musical. Some melodies are fit for church and some are not, and the reason can only be heard, not explained with words. Sacred melodies reveal to us a truth about Heaven that cannot be found in Scripture. Even the smallest arts – a blend of incense, the embroidery on a sacred towel – directly represent an aspect of God’s Kingdom. They are not there to ornament something else, but rather they themselves are icons, essential glimpses of the fullness of God’s Kingdom. To deny this is to deny the incarnation. Ours is not the religion in which the Logos became text. Christ became flesh, and he revealed the Father to us not only in his words, but in his very appearance.

The church has always recognized that an incarnational faith must be manifest in a fully incarnate liturgy, where the arts work together to edify all the senses. And if liturgical art is to express the fullness of the kingdom of God, then all the arts must work together. After all, incense cannot explain our doctrines any better than scripture can tell us how Heaven smells. And so, as we examine each art one by one, it becomes apparent that each one has certain strengths and weaknesses in terms of what it can express. While sacred texts have the ability to explain facts and abstractions with great specificity and clarity, they are unable to impact our hearts with the sudden intensity of a tolling church bell or the astonishing beauty of an iconostasis.

I would like to suggest that there is a spectrum in art. At one end are arts that carry obvious and specific meaning, and these would include texts and icons. At the other end are arts whose meaning is very obscure and non-verbal, such as incense and bells. In the middle are architecture and music, which have characteristics of both types. Interestingly, it is often the case in art that the more obvious and concrete the meaning, the less captivating and persuasive the art is to our senses. Sacred texts and icons are easy to ignore. They require deliberate attention to understand, and the truth they express is easy for non-believers to dismiss. On the other hand, the awesome toll of a great bell strikes to the very depths of our hearts and affects believer and non-believer alike, though neither may know how to interpret the bell’s meaning. The bell tells us something that scripture cannot.

If we examine all the liturgical arts one by one, it is possible to assess the strengths and weaknesses of each. Each art has something unique to reveal to us about God and his Kingdom. Thus even if we lack the direct spiritual experience of heaven granted to many of the saints while on earth, still, through close attentiveness to the liturgical expressions of our Tradition, we can apprehend something of the beauties of the Age to Come. The more closely our liturgical arts conform to the traditional norms of Orthodoxy, the more capable they are of conveying truth. But our hearts and minds must be conditioned to receiving truth through these Traditions, so that we may have eyes to see. What follows is my imperfect attempt to descry heaven in the things of earth.