A ‘Small Entrance’ into Orthodox Christian Sacred Music: Part One -The Song of the Angels

Thy Resurrection, O Christ our Savior, the angels in heaven hymn. Enable us also on earth to glorify Thee in purity of heart. [1] 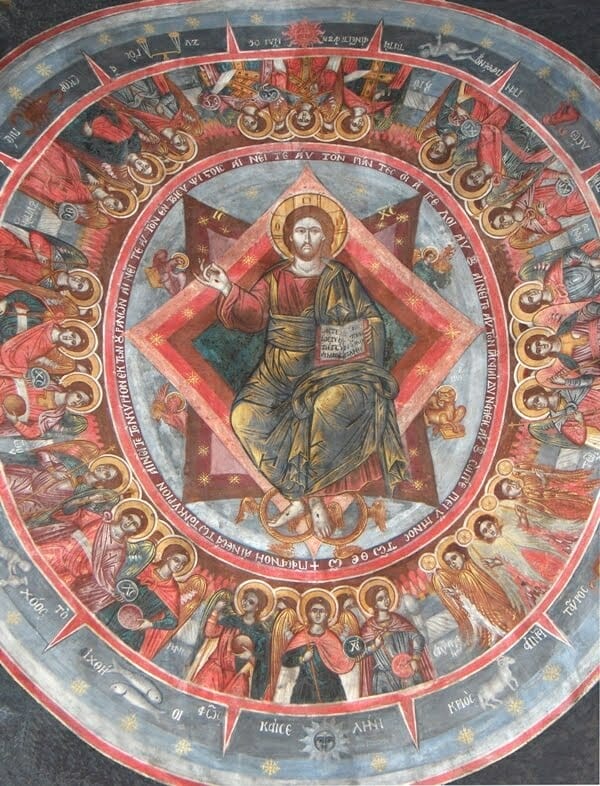 In trying to discern some of the truth about the phenomenon of Orthodox sacred music, it helps to start at the beginning. Where does sacred music begin? For Orthodox Christians who with a simple faith accept the authority of Holy Scripture and Holy Tradition, the true origin of sacred music is not to be discovered in ancient liturgical manuscripts or in passing references to psalmody in the New Testament and early Fathers, but is to be found in the singing of the angelic choir, those first-created beings who have been chanting fitting praises to God since before the beginning of the visible creation. Herein, according to the witness of Scripture and the Saints throughout the ages, lies the archetypal pattern of sacred music. It is as a participant in the angelic singing that mankind — by virtue of Christ’s Incarnation, whereby ‘the things of earth join chorus with the heavens, [2] — becomes able once again to offer right worship (orthodoxia) to the Creator in purity of heart. I suggest, therefore, that we use the singing of the angels — and, specifically, three essential characteristics of it — as a starting point for our ‘small entrance’ into understanding the phenomenon of Orthodox sacred music.

One essential characteristic of angelic song that is evident in Scripture is that the music of the angels is exclusively vocal, that it is sung in some manner, usually with discernible words, and that it is thus a direct musical offering of the angels’ bodily and rational nature (according to the angelic sense of a ‘body’[3] ). The popular Western concept of angels accompanying their singing with harps and other instruments is unknown in Scripture and Orthodox tradition. [4] This is important because, in exclusively singing the praises of God, the angels offer Him something essential to themselves rather than making an offering by way of a medium extrinsic to their nature. This is one key reason why Orthodox Christian liturgical tradition (including that of the West, until the Middle Ages) does not permit the use of musical instruments in the divine services.

For us humans, this exclusively vocal aspect of sacred music is all the more important, because the added dimension of our fleshly and fallen psychosomatic nature — i.e., ‘I’m tired;’ ‘I’m sick;’ ‘My voice isn’t warmed up;’ ‘I don’t read music;’ — makes it singularly difficult to sing well without the aid of instruments. Every church singer knows this. Thus, the concerted effort involved in uniting mind and body in order to praise God with the voice alone becomes an important ascetical labor, one which serves to purify and strengthen church singers in their work — provided they have the will to rise towards angelic perfection.

We can also see from Scripture and Holy Tradition that in addition to being vocal, angelic music is devotional in nature; it is a direct movement of the angels’ inner being towards God, an expression of their zeal, reverence, ardor, and love for their Maker. This means, among other things, that the angels do not offer praise to God mechanically or out of mere necessity (‘I just sing because there’s no one else to do it!’), but from a free and willing spirit. God may have created the angels to serve Him and praise Him — this is also why He created man —but He endowed them with the freedom to choose not to do this, as we will see shortly. In other words, the angels sing praises to God because they actively love Him and wish to honor Him, not just because it’s their job, or because they happen to like singing, or because it’s what they’ve ‘always done.’

It is a sad fact that, all too often, musicians in churches today fall far short of this heartfelt angelic devotion in their musical offerings to God, singing bland music in a mechanical, lackadaisical, and inattentive manner, doing what they do mostly out of habit or mere practical necessity, making but little effort to imbue their singing with zeal, reverence, divine ardor, and love. If our songs are to be truly sacred, we must struggle against this kind of spiritual inertia — both in the style of music we sing and the manner in which we sing it — offering to God instead the first-fruits of our energies with eagerness and warmth of heart.

In addition to the two aforementioned characteristics, angelic song possesses a third all-important quality which is deserving of our attention and emulation: watchfulness. For human beings, this watchfulness encompasses many aspects of music-making, from the proper composition of church hymns to being on guard against the inattentiveness and indifference that we were just speaking about before. We’ll explore some of these aspects in a more focused way in another chapter. However, in relation to the angels — and vital for us as well — the quality of watchfulness that must be mentioned here is watchfulness specifically against vainglory. Let us look for a moment at a passage from the Synaxarion [5] for November 8, the feast of the Holy Archangels, that deals directly with this subject:

In the first moments of the creation of the invisible world, the whole celestial hierarchy, a number beyond all telling, was rejoicing in the divine light and leading a sacred round, simple and without end, while chanting with a mighty voice: Holy, holy, holy, is the Lord of Hosts: heaven and earth are full of His glory (Is. 6:3). But then Lucifer, the heavenly spirit of highest rank who was nearest to God and all-shining with His light, became proud of the advantages he had been given and wanted to be equal to God. He said within himself: I will ascend into heaven; I will exalt my throne above the stars of God. I will ascend above the heights of the clouds; I will be like the Most High (Is. 14:13–14). He was not evil by nature but, in his pride, chose to revolt against Him who brought him into being. He was the first to refuse the good and to choose evil. He turned away from the light to sink into the darkness of godlesseness. As soon as he uttered these words, he was cast down into the depths of Hell, tearing asunder the heavens as he fell and carrying down with him a multitude of angels of every order, whose chief he became. But the Archangel Michael, Prince of the Heavenly Hosts, was strengthened mightily in the divine light by reason of his humility and due deference to his Creator. On seeing the dreadful gap left in the heavens by the fall of so great a multitude, the Archangel leapt into the breach and rallied the faithful Angels with the cry: Let us attend! [6] That is to say: ‘Let us be on our guard! Let us be vigilant; for we, who have been raised up to stand before God, are of His making! Let us remember that we are servants! Let us strive for self-knowledge, seeing what a fall those who wanted to be equal to God have had! [7]

We see here that with the fall of Lucifer and his minions the angels learned the necessity of being watchful over their thoughts, of being on guard against pride and vainglory. Lucifer’s sin was that he chose to worship himself in place of God, to ascribe glory to himself rather than to Him that had endowed him with glory. Thus the angels learned that no matter how radiant and glorious they may be, no matter how perfect their song, they must always acknowledge that they did not bring themselves or any of their good qualities into being, and they are ever watchful against any thought that may distract them from this awareness. How vital this is for those whose duty it is to sing in church! It is a constant temptation for any church musician who enjoys even the smallest measure of apparent success in his musical endeavors to ascribe the glory to his own efforts. Such vainglory is a spiritual poison, and it will render our efforts useless more swiftly than anything else. The lesson of the Archangel Michael bears frequent and emphatic repetition: ‘Let us attend! Let us be on our guard! Let us be vigilant; for we, who have been raised up to stand before God [as every singer has been who offers praise in the divine services], are of His making! Let us remember that we are servants!’

The three essential qualities, then, that typify angelic song — and consequently the Orthodox Christian tradition of liturgical singing patterned after it — are:

Aside from conforming to Orthodox Tradition in an external canonical sense (that is, for example, a hymn uses a canonical liturgical text), I assert that if any liturgical music is to be considered ‘sacred’ in the full spiritual sense — that is, God-pleasing and God-befitting, as well as possessing the power to ‘fan the spark’ of divine grace within the heart [8] — it must possess all three of these qualities without exception, both in the style of its composition and in the manner of its execution. Any liturgical singing that purports to be sacred music and yet lacks or distorts one of these three essential qualities necessarily falls short of the archetypal primordial song of the angels. Such music, though it may possess many admirable qualities, must be considered a ‘song of men,’ and not in harmony with the true Orthodox tradition of angelic sacred music that has been resounding before the throne of God since the foundation of the world.

A Small Entrance into Orthodox Christian Sacred Music will be an ongoing series.

1 Saturday Evening Aposticha, Tone 6; also sung at the beginning of the Paschal Vigil.

2 From the Akathist to the Mother of God.

3 St. John Damascene explains that, ‘compared with us, the angel is said to be incorporeal and immaterial, although in comparison with God, who alone is incomparable, everything proves to be gross and material—for only the Divinity is truly immaterial and incorporeal.’ (Exact Exposition of the Orthodox Faith, Bk. 2,Ch. 3)

4 The angelic playing of ‘trumpets’ (salpiggi), though periodically mentioned in Scripture (Cf. Rev. 8), is not presented in connection with the angels’ worship of God, but should rather be understood as an alarm directed at mankind and the rest of creation. Conversely, the Psalms that mention mankind (and not the angels) praising God with musical instruments are generally understood by the Church Fathers as possessing a spiritual rather than a literal meaning. It is well known among Judaic scholars that the use of musical instruments was proscribed from ancient Temple worship just as it is still forbidden in the Orthodox Church today.

5 A traditional collection of the Lives of the Saints and readings on the principal fixed feast days of the Orthodox Church.

6 This same exclamation is used by the deacon or the priest during every Orthodox service to call the faithful to attention.