The Recovery of The Arts (pt.3): Memory of the Heart

In my last article in this series, I addressed human activity and the arts as examples of what the Church Fathers call “the garments of skins”, a supplement to our nature exemplified by the coverings given to Adam and Eve to protect them in their fall.   The garments of skin are very ambiguous, running the line between death and salvation.  But although we have affirmed that these garments of death can be transformed into garments of glory, the question still needs to be addressed of what exactly is the difference between the two.  When do the arts, whether in the Church or not,  slip on the side of death and when on the contrary is this death transformed into life?

To answer the question, we need to look at the basic element which composes the garments of skins.  The garments of skins are coverings, they are added from the outside, they are in fact a periphery.   In being a periphery, like all peripheries, their identity is defined in relation to a center.  Here we need to take a time to reflect, because the basic structure of center and periphery is so primordial that we often take it for granted.  In a traditional world one could even end up overlooking it, for just as the air we breathe,  it permeates everything and is one of the very overarching forms of all human space and activity.  And the relationship of the center to periphery is exactly what Christ and His Church is about, whether it is the very shape of a cross or the Great Commission itself, we could not exhaust the ways in which Christianity connects the center to the periphery[1]. 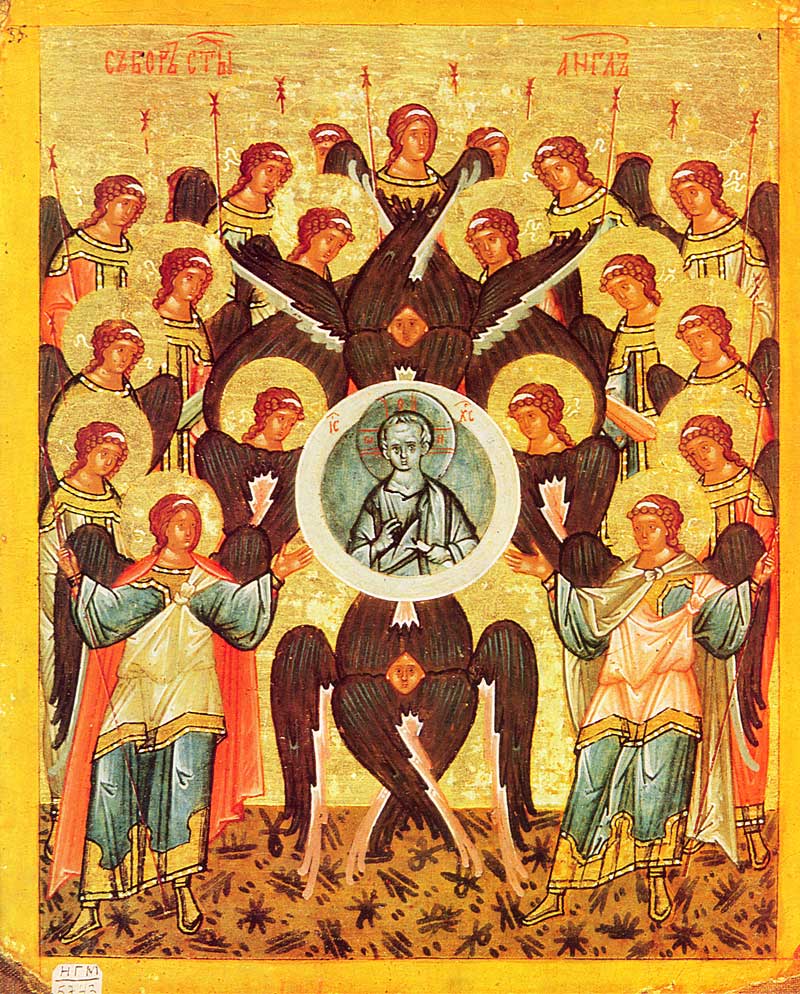 The center in the geometric sense, like the axis of a wheel, is a point.  The axis of a wheel does not participate in the movement of the wheel, yet it is by and around this point that all movement is organized and takes its reality.  The center, which in the human being is called the heart, is not in any way static but is rather fullness of activity.  It is in fact the active principle by which the space it determines finds both its origin and its convergence (if one for example imagines a circle and the indefinite number if radii traveling from the periphery to the center.)  And so we can say that everything can be found in the heart and everything comes from the heart, for the « simple » nature of any thing, that is the convergence of all its particular modalities, is identical with its specific center of which the modalities are a « radiation » (hence the word radius itself).  The central point of a space is a virtual one, it has no dimension within the space itself, yet it is no less effectively “present”.  It therefore both participates in the space through an act of invisible presence, and at the same time effectively transcends the whole of this space.  This is why the heart is at the limit of the created and the uncreated and that it is in the heart that the divine dwells, in the most inner place, beyond the « veils of the heart », like it is in the most inner place, beyond all the different veils of the temple that the Glory of God can be found. 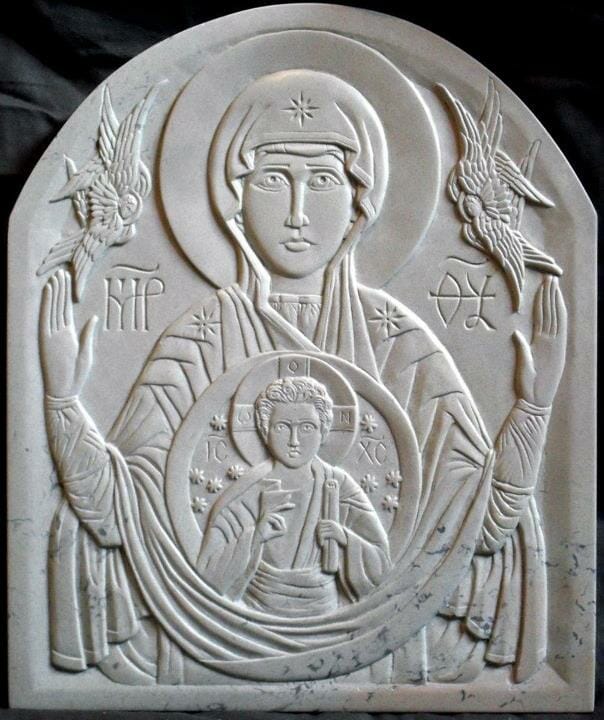 My own carving of the Theotokos of the Sign

This spatial and therefore geometric symbolism of center and periphery is quite powerful, and it is also universal, being found in all cultures at all times.  This same symbolism can be transposed from space into time through the notion of the cycle.  We see an example of this with the relationship established in hesychasm between the movement of the « nous » from the heart to the senses and its return, occurring in a purely « spatial » manner as center and periphery, and the cycles of breathing and of the heartbeat which rather include a notion of time.  The beginning and the end of a cycle are a momentary return to the origin, the Sabbath, which like the center, is a rest from cyclic motion and corresponds in hesychasm to the « holding » of the breath, corresponding itself in its spatial modality to the guarding of the heart.  But the true center of time, of which the Sabbath is an image, is Eternity, which is both outside time, yet is also the fullness of time, like the center is both immutable and the fullness of action.

In looking at this we must face the fact that peripheries are always ambiguous. They are an extension of the center, but also a distance from it.  They both show and hide the center at the same time.  For example, a wall is both a protection and a limit, a protection from the outside and a barrier to the inside. A wall will give value to something by showing us that what is inside is worth guarding while hiding that very thing for us.  All of us who have pondered the double edge of the iconostasis will know what I am talking about.

So what then transforms the garments of skin into garments of glory?  The answer is memory.  Memory of God and memory of the heart.  Memory is, in an Orthodox perspective, a true and real “presencing”.   Memory is the “making present” of something in the very distancing from it.  Memory is the manner in which we can both be simultaneously separated from and united to the very same thing.  For in our liturgical life, we must and do say that the center is Christ, Christ invisible in our “midst”, or rather our “middle”, Christ invisibly carried by the Cherubim and mostly invisibly present in the Eucharist.  The Eucharist is the “First memory”.  As Christ said “Do this in remembrance of me”, we experience this as the “Perfect Memory”, the memory where Christ is fully and truly present in the elements, while the elements remain truly themselves.  And from this first memory, this visible, touchable anchor, the entire liturgical forms flow as different levels of memory:  peripheries, outer signs, garments of skin indeed, but fully transformed by their connection to the center. 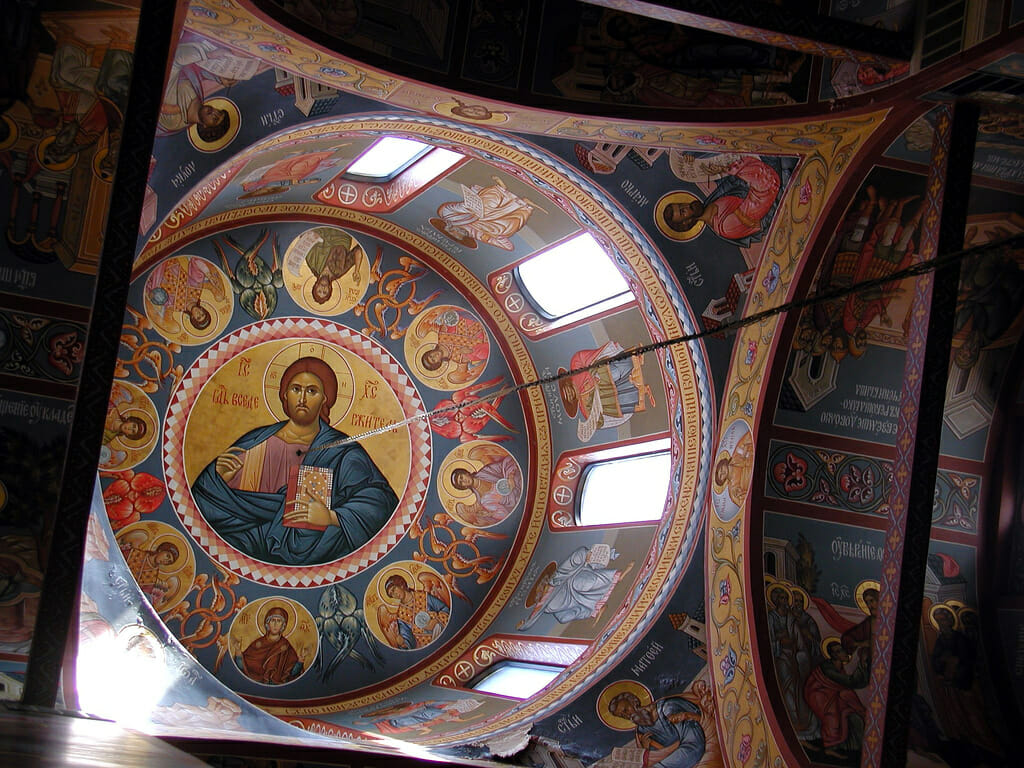 So what transforms the garments of skin into garments of glory? The answer is hierarchy.  Rather than seeing the relationship between center and periphery as inside and outside as it is often seen, a proper understanding of the relationship between center and periphery is a hierarchical one.  In the cosmology of Dyonisius the Aeropagite presented most clearly St-Maximus, we see how hierarchy is the best way to experience the relationship between the One and Many. The outer signs of things point to their “logos” as their own center, which then points to the Logos, True Being, as the cosmic center.  The Fall happens when the periphery forgets its relation to the center, rebels against the center. The Fall happens when what is limited and contained refuses to submit and therefore acknowledge its true relationship to what is Infinite and Eternal.  Gregory of Nyssa, in a text regarding the garments of skin tells us that « the full knowledge of being comes about by purifying our opinion concerning nonbeing »[2]. He then continues: « Falsehood is a kind of impression which arises in the understanding about non-being, as though what does not exist does, in fact, exists. But Truth is the true apprehension of real Being.  …Being is… …what possesses existence in its own nature, and what non being is… … is existence only in appearance, with no self subsisting nature. ». [3]The existence of things, when seen as anchored in being, attain all their reality, whereas when there is an attempt to give them an autonomous existence, they appear as a lack of full being, and therefore a level of error, an illusion, for ontologically and in eternity, God is all in all…

A traditional Orthodox cross compared to the “Universalist Church of America” cross and the baffling proof that even a cross can be decentred.

So then how does this appear in practice?  What does it look like, for example, for a liturgical object to “remember” the center?  The answer is easier than one might expect.  It remembers the center when its very structure is an exemplification of its relationship to the center.  That might seem tautological, but I assure you it is not.   The proper liturgical arts appear as centered, as ordered, as hierarchical, as having radiant, balanced compositions.   The dome of a church is on top in the center, the nave is below yet still at the center and the vestibule leads to the outside.  The proper liturgical arts appear when the peripheral elements of something, whether it is physical shape, composition, ornamentation, coloring, melisma or even melody, show their proper relationship to the liturgical function of that very thing.   So the simplest example is that Christ has the central place in our iconographic program, whether in the dome for domed churches on in the apse for churches without domes.    But it also means that melisma should hopefully not completely obscure the meaning of words, that the ornamentation on something must not compete with its shape, etc., etc.   One might find the examples I have been using to be almost boring and self-evident.  But if one ponders just for one second the liturgical horrors born in the 20th century and those that are sadly still being born today,  one cannot take these self evident things lightly.

And so as liturgical artists, and ultimately as Christians,  it is to the remembering, to the making present of the center, this Center that is in fact Christ, that we must strive.

Design for St-Joseph and Andrew Church designed by Andrew Gould compared to Catholic Church of St-Anne in London.

[1] For a more complete study of the Garments of Skins in the Church Fathers and their relationship to center and periphery, please see my essay on the subject.