The Recovery of the Arts (pt.2): From the Garden to the City

My first article in this series proposed a vision of the arts based on Old Testament, Greek and finally the Orthodox Christian worldview. As this series on the recovery of the arts develops I will be exploring several underlying questions of the arts, the source of techne, the ontological roots of human activity and their role in the salvation of the world. 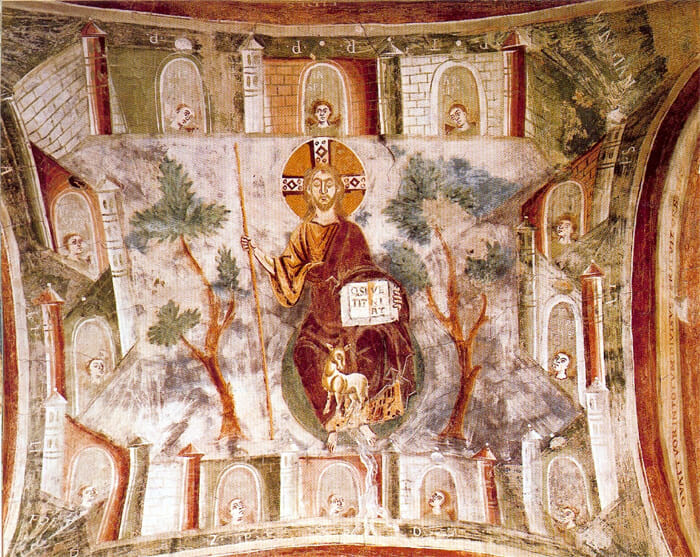 There are many things which we know intuitively, which we grasp through our experience of prayer and the liturgy, and often words escape us to explain them. This can be true for traditional architecture, for the form of chanting, the design of an iconostasis or the smell of incense. This is quite normal and healthy, but history has also taught us, through the disorderly centuries that precede us, that excess, confusion, ostentation and plain heresy can quickly creep into the church, into its liturgical life and replace traditional forms. We need, today more than ever, to understand the basic reason why liturgical art is made in a certain way, why it is centripetal, hierarchical, balanced and ordered in space, why its ornamental value should never obscure its form and function.  We will get to specifics eventually, but we first need to get a general sense of techne in the story of Mankind.

The story of the arts in its traditional understanding is the story of the human capacity and drive to make things and we can follow its line through the Bible and the Fathers. This story is a very mysterious one as it rides the line between death and salvation.  Because of this, we will see its symbolism move back and forth, or move rather from the curse of Adam and Cain to the glorious New Creation.

In the Patristic understanding, techne is associated very closely with the “garments of skins”. The garments of skin are the vestments given by God to Man in order to protect him from the consequences of the fall. They are both “made of death” but also a protection from death. In the patristic understanding, these garments represent everything that is added to our original nature in order to protect us. They are our mortal biological existence[1], our attachment to animality, but also all of human activity, arts, politics, law.

The theologian Panayiotis Nellas, in his wonderful book, “Deification in Christ” describes the arts and general applied knowledge as an example of the these garments of skin. Nellas paraphrases Chrysostom saying: “before the fall man had no need either for “cities”, or for “arts and skills”, or for “the covering of clothing”. “These were then superfluous,” he continues, “but afterwards they became necessary because of our infirmity; and not only these things but everything else… the whole throng of remaining necessities. And death entered with all these, dragging all of them in along with itself.”[2]

This of course is the notion of the supplement. The idea of supplement, of the relation of death to this supplement is one which is both very ancient and contemporary, making a famous reappearance most recently in Jacques Derrida’s reading of the Phaedrus, “Plato’s Pharmacy”. In his article, Derrida discusses Plato’s view of writing as “pharmakon”, a word that means both poison and cure at the same time. Writing, as presented by Socrates in the Phaedrus, by being exterior to logos both supplements memory as a reminder while reducing actual memory. The reminder is both a blessing and a curse. This idea that something can be both a poison and a cure appears frequently in Orthodox tradition, for example St-John Climacus cites a monk saying:  “It happened that I fell into a sin very grave for my soul.  But as it was not my habit to hide a serpent in the depths of my heart, I seized it by the tail and found it immediately a doctor” [3]. It is this double idea that we need to wrap our heads around, this notion related to the supplement, of techne as something which is added to what is natural in order to increase it, but is also the cause of its lacking. This may sound strange at first glance, but actually we experience it all the time. Technology is always simplifying our lives while making us dependent upon the very solutions it proposes.  So although a book of matches is a great cure for making a fire, who today can still make a fire without one?

And so returning to the Biblical narrative, we find techne associated to the curse of Cain, but then the world is saved by a carpenter, who by building a large boat is able protect the seed of the world from death[4]. The Ark has all the symbolism of the garments of skin, being an artificial protection, a “shell” placed around life in order to preserve it. And of course we all know that the Ark has been a longstanding symbol for the Church itself (even the word “nave”, the part of the church building where the faithful stand, means “boat”). But lo and behold, the symbolism of techne flips on itself once again, for what story follows the flood?  It is the story of Babel, where men having learned to make bricks and mortar want to use them to make themselves equal to God. And so after the world has been saved by techne, it becomes the source of humanity’s second curse. And from then, once again the Bible presents techne as dubious, dangerous and related to the outsider.

It is here that we should remind ourselves that Christ himself was called a carpenter. The people asked: “ ‘Is this not the carpenter, the Son of Mary, and brother of James, Joses, Judas, and Simon? And are not His sisters here with us?’ So they were offended at Him.” In looking more carefully at the text we find that Christ is in actuality called a “Tekton”, a more general term meaning someone who practices techne, an artisan or even an artist. We should also not be surprised that the Jews were offended by him considering all I have said regarding the perception of Techne.

So why then is Christ called an artist? When one looks at the perception of Techne both by Greeks and Jews, one can see how they apply to Christ.  For the Incarnation is in a way an “applied knowledge” itself,  already an affront to the absolute superiority of “pure forms”.   In the Person of Jesus Christ we find not the shadows and puppets of Plato’s cave, but the full revelation of the infinite in the finite.  It is Sophia fully uniting episteme with techne.   The incarnation unites man’s capacity to “transform” Creation with the Creator itself, where we could say that Christ is Creator as Logos and an Artisan as Man.

As for the Hebrew notion of techne as related to death and corruption, Christianity is very much about the mystery of death, of how the corruptible, the garments of skin are finally made incorruptible, how in the very end that which is exterior, the dead shell, will become the house of God[5]. We will see time and time again how in Christianity we find things turned on their head, where death and its consequences are turned against themselves to create new life. For even in our Orthodox worship, we all know liturgy means “work of the people”, but do we realize that work is itself a consequence of the curse in the Garden!? With Christ entering death he goes to the end of this process which originated in the fall, the process started by the garments of skin with death and the first turning of death against death. This process of death began the great cycles of humanity where the knowledge of good and evil became the motor for the movement of history. In this history we can see techne, the arts move mysteriously back and forth on the boundary of death and salvation. But in the end, in the glorious coming, what is interior and innocent will be fully united to what is exterior and technical,  for it is not to a garden that we are headed to finally, but the tree of life will be surrounded by a glorious city, the Heavenly Jerusalem appearing as the final image of this great cosmic mystery. It is the movement of innocence to knowledge, which although was first a fall will one day be our fullness. And we also know that this Heavenly Jerusalem is already there for those who can see it. Just as we are called to already partake of the resurrection through love,  the worship of the Church, the liturgy, the icons, the holy relics and all the liturgical arts can become glimpses and foretaste for us of the ultimate transformation of death into glory.

[4] It is also worth mentioning that one of the long withstanding traditions regarding Noah, is that his wife is Namaah, the last woman mentioned in Cain’s genealogy.  This is interesting to give more weight to Noah being an artisan, but also is a beautiful foreshadowing of Christ uniting the “chosen” and the “gentiles” and making them all pure in the waters of Baptism.

[5] Relics are of course the most remarkable example of this.