May 7, 2018The Making of a New Icon: “Christ Breaking the Bonds of Animal Suffering”

The Ass and The Ox in The Nativity Icon 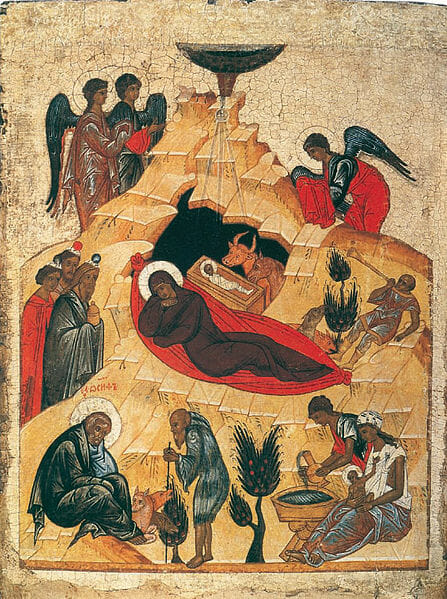 There is no ass or ox in the Biblical narratives of the birth of Christ.  Yet, besides the Christ Child himself, the ass and the ox are the most ancient and stable elements in the iconography of the nativity.  In fact the earliest example of a nativity known to us contains only the swaddled Christ in the manger flanked by the ox at his head and the ass at his feet.  David Clayton, on the New Liturgical Movement blog, has written a detailed piece on the subject, and I will go through the basics while adding a few more aspects he does not mention.

Nativity scene on a 4th century sarcophagus from Italy

When reading comments on the nativity (for example in Ouspensky’s “The Meaning of Icons”) one finds that the inclusion of this detail is a reference to the prophecy of Isaiah:

The ox knows his owner, and the ass his master’s crib: but Israel has not known me, and my people have not understood.

Some apocryphal texts have the ass and the ox worshiping the Christ child, such as the gospel of pseudo-Matthew:

Therefore, the animals, the ox and the ass, with him in their midst incessantly adored him. Then was fulfilled that which was said by Habakkuk the prophet, saying, “Between two animals you are made manifest.”

What though is the relationship between the ox and the ass, why are these animals paired together so?  We will often read that traditionally, the ox is seen as Israel, and the ass is seen as the Gentiles.  This comes from a very important distinction about the two animals.  The ox is a “clean” animal, and the ass is an “unclean” animal according to dietary proscription in the Old Testament.

Mixing the clean and the unclean is related very tightly to the mixing of Jews and Gentiles.  The clearest example of this is in St-Peter’s vision of the clean and unclean meats placed together, which signify the entry of Gentiles into the body of the Church.  Indeed there is a Mosaic law which I have never seen quoted in relation to the Nativity Icon, but which seems to hold one of the keys to the ass and the ox:

Thou shall not plow with an ox and an ass yoked together.

What is proscribed, the yoking of the clean and unclean, the bringing together of the “inside” and “outside” can only be accomplished without sin by the Christ, the incarnation of the Logos.  In fact, even St-Paul following this tradition, uses the same imagery to warn Christians not to be “yoked” with unbelievers.

Icon of the Entry into Jerusalem (15th century Russia)

This brings out another meaning, which is related to the incarnation and its relation to universality of the Church.  The ass is a beast of burden, a “mindless” strength which was created to “carry” .  In this respect, the ass is a symbol of corporality itself.  One should not be surprised that the symbol of the unclean and “outer” is analogical to fallen corporal existence and sensuality. This can be seen so strongly in the hesychastic tradition in its relationship between the heart and the senses.  The “outer” part, corporality, the senses, the Gentile, are related to the garments of skin, which we have discussed before, and this periphery can be seen as protecting but also carrying what is precious, like the shell of the ark…

It therefore follows naturally that stories such as the talking ass of Balaam are seen as prefigurations of the incarnation in sources as early as St-Irenaeus, or that it is so important for Christ be found riding an ass (even in later Rabbinical Judaism, the ass and colt of Zecharia’s prophesy are seen as representing the Gentiles) .  These Old Testament images, like the joining of the ass and the ox in the icon of the Nativity, are symbolic of the joining of extremes, the union of the spiritual and corporal, the clean and unclean, the inside and outside and ultimately the uncreated and created in the person of our Lord Jesus Christ.