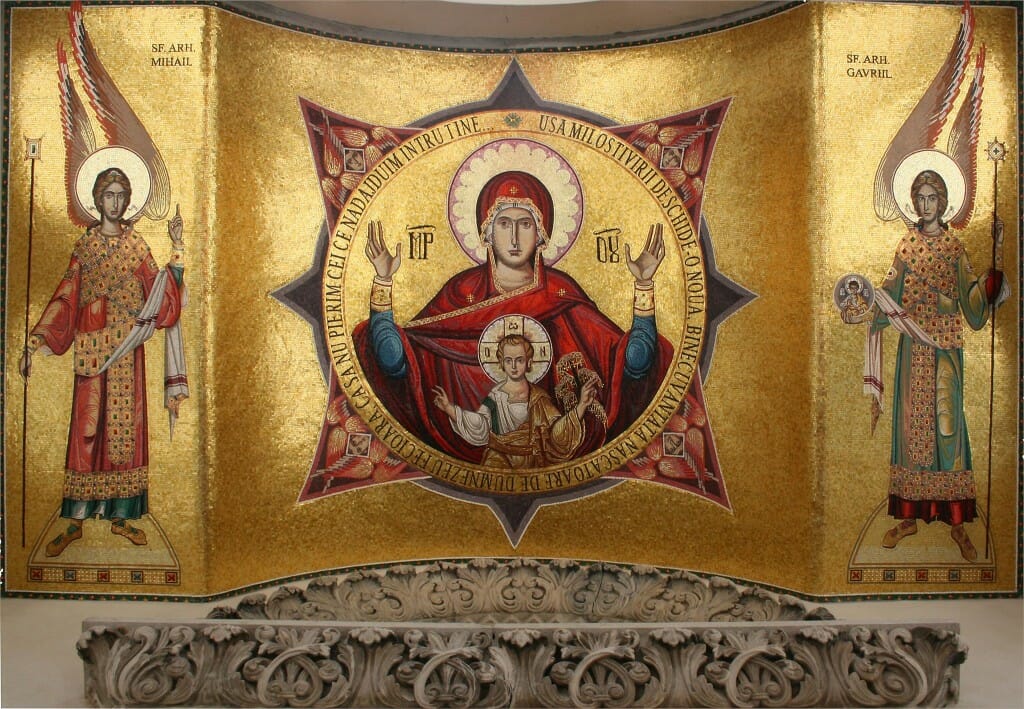 Theotokos of the Sign from the Patriarchal Complex in Bucharest.

Mozaicon was started by a group of Romanian fresco artists who came together in 2008 to create the mosaics for the Patriarchal Cathedral Complex in Bucharest.  After the initial project, only one of the artists, Daniel Codrescu continued working in mosaics until 2010, when once again other artists joined in to work on multiple projects in Romania but also in other countries, like Greece, the US and Austria.

The group is fluid, changing according to orders, yet there is a full time core of 4 artists. Daniel Codrescu still manages the entire project, and the person managing the workshop is named Alex Costenco. He also helps to plan out projects and manages the work along the way. 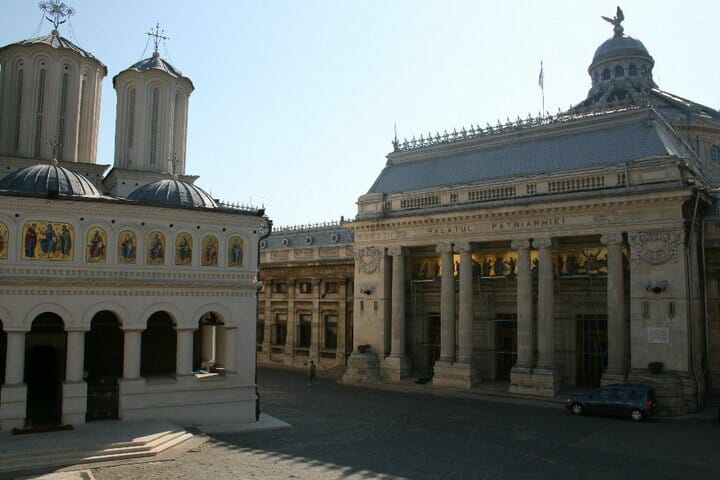 General view of the Patriarchal Complex in Bucharest

I asked Anca Sirbu, one of permanent artists to give me some insight on how they work, their influences and approach. She explained that different artists work on different details according to their strength.  Anca Sirbu is the one who makes the faces and hands, others like Alex Costenco specialize in clothing and patterns while others will do the rest.  Sirbu’s comments about influence are not surprising: Hagia Sophia, Ravenna, a desire to recapture the subtlety and richness of ancient mosaics while being attentive to what is happening right now in Belarus and other Orthodox countries. 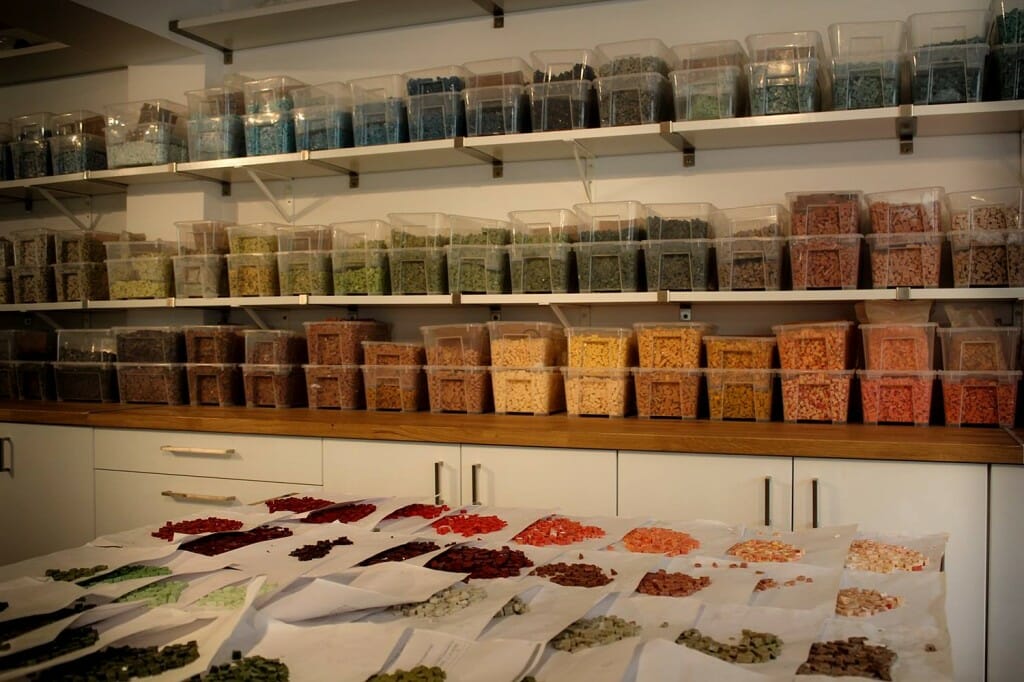 The Mozaicon workshop with a few of the colors used

What had struck me in seeing their work is the particular intensity of the color, the very robust contrasts compared to the Hagia Sophia mosaics for example.  This Sirbu relates to the new techniques and medium of Murano glass tiles.  They also do not use grout and with a dark background, this makes the colors more intense. 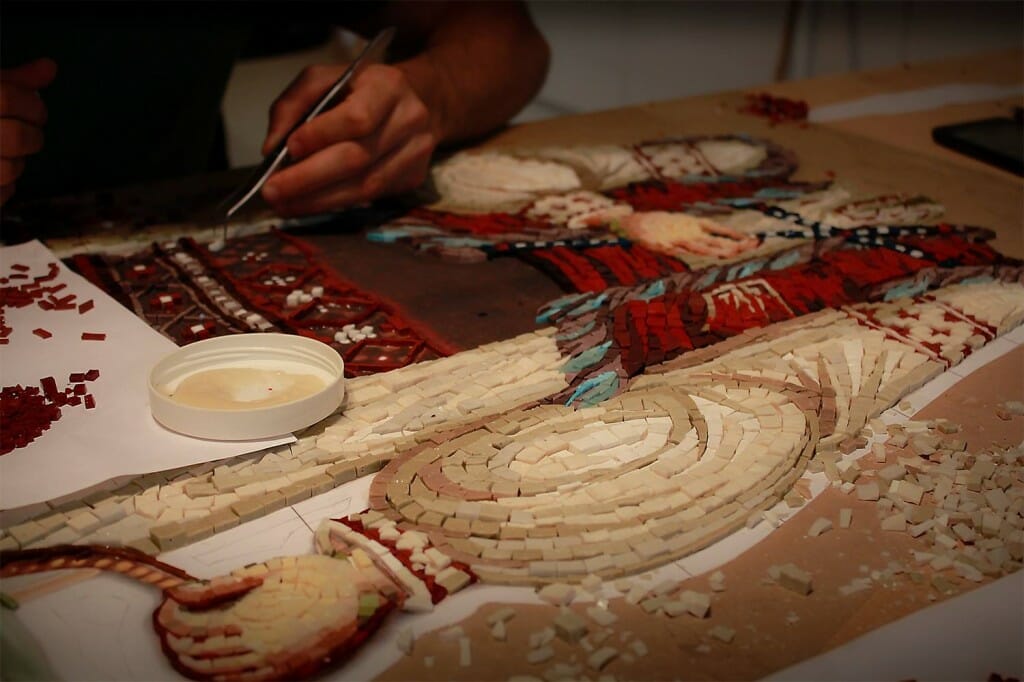 Alex Costenco working on a mosaic

Their process is very open and they are constantly looking for more lively ways to represent the saints and different surfaces.  Sirbu feels like her process is almost as if she is painting with tiles, aware of a modern preoccupation for finesse in representation and how our experience of painting will inevitably affect mosaics.  This to me is quite obvious when looking at close-ups of the faces she is making.  One finds much subtlety and complexity of color, variation, contrast and tonality, all of which is used in a shimmering manner that opens facial expressions and gives simultaneously an iconic and lively sense to the image. 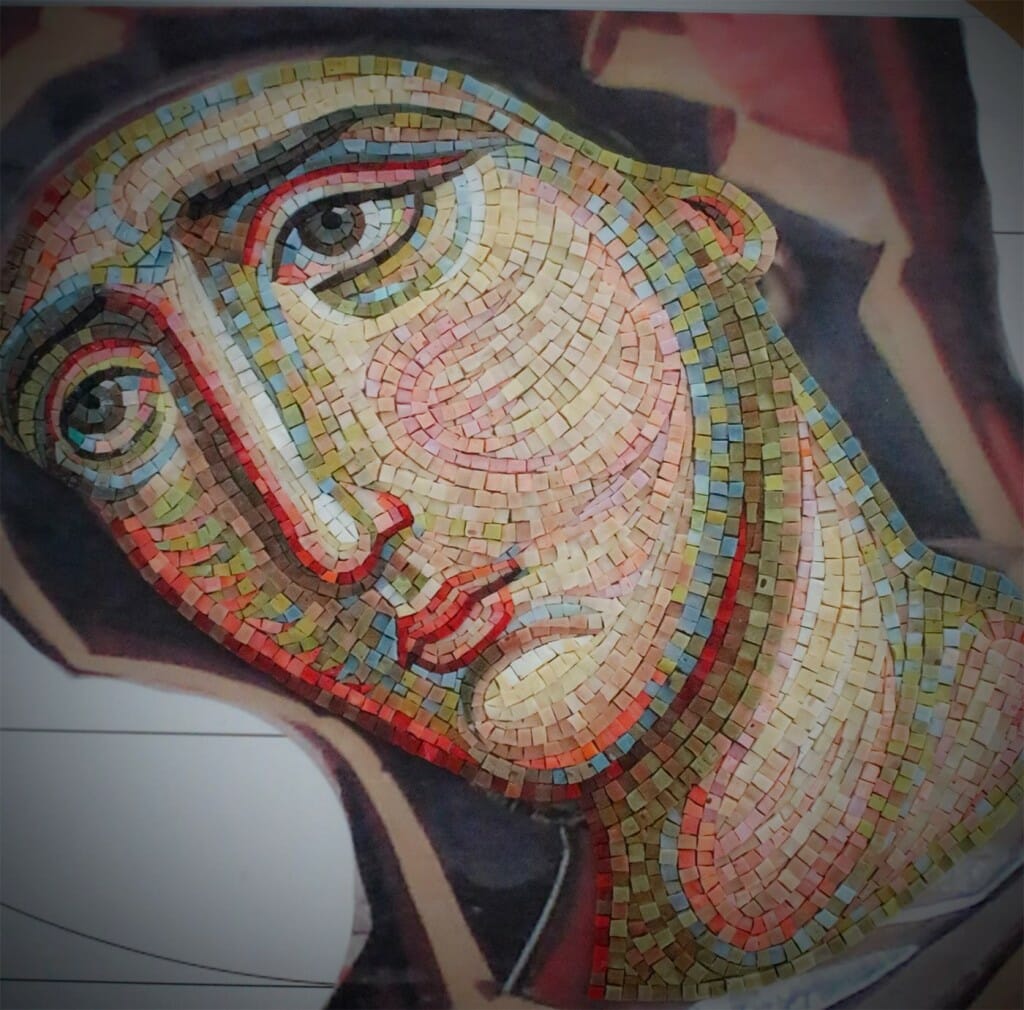 A face by Anca Sirbu — Subtlety and complexity of color. Notice the use of extremely “hot” pink on the warm side of the face. 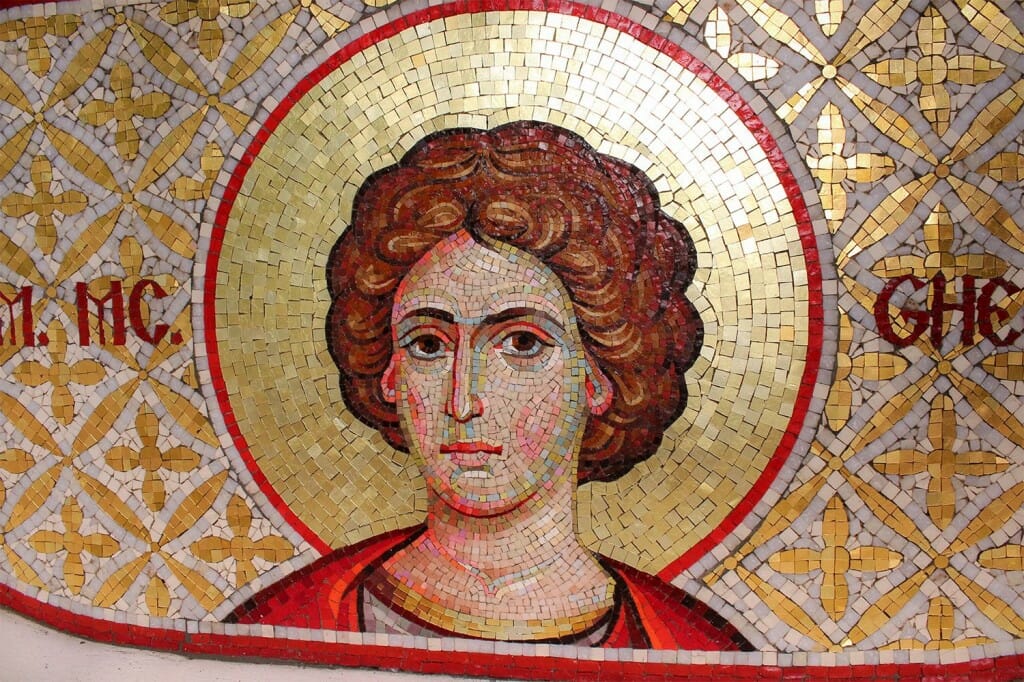 Close-up of St-George made by Anca Sirbu.

What also strikes the viewer is their experimental use of color, which can most clearly be see in the very dense layering of folds and patterns created by Alex Costenco.  Such density creates surfaces bursting with energy, vibrating almost.  Some of it is on the verge of going to far but thankfully never does. 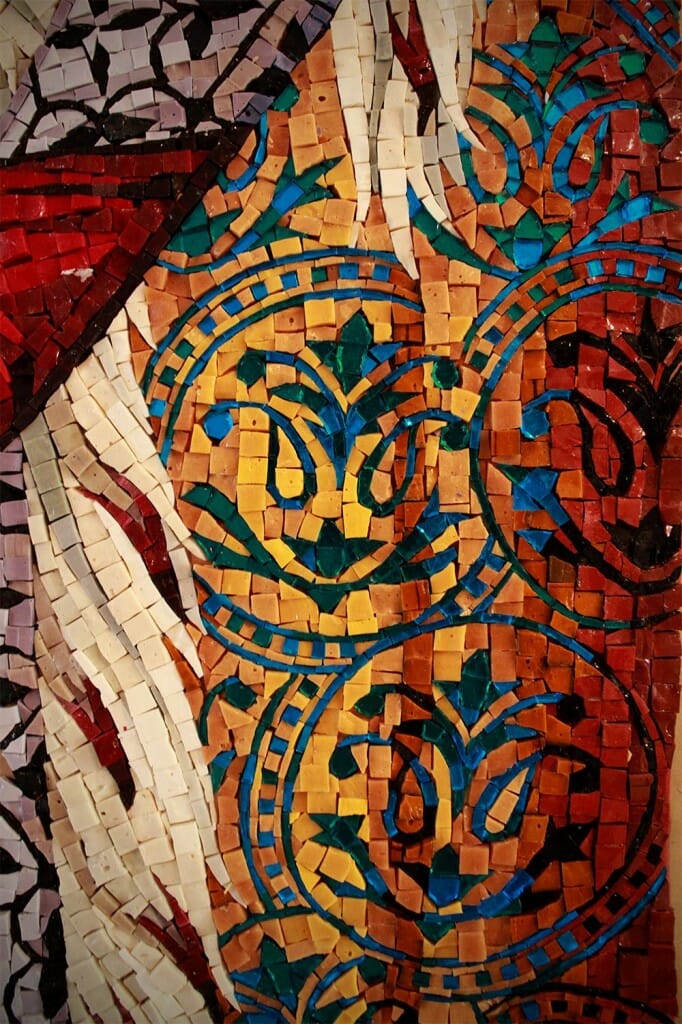 Pattern in clothing by Alex Costenco 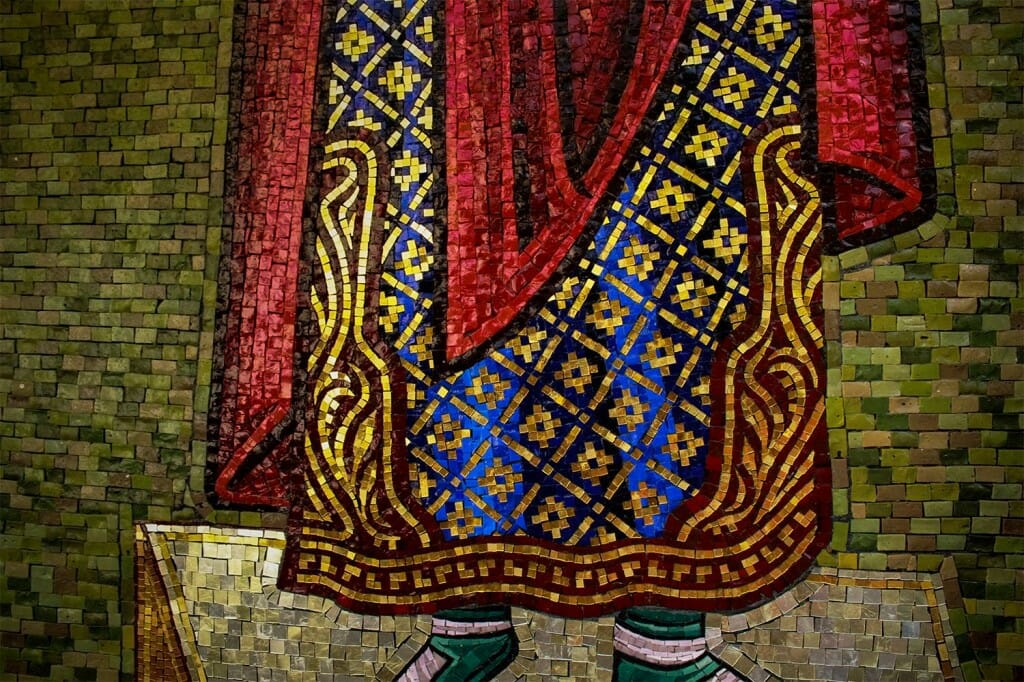 Gold blue and red. Folds and patterns coalesce in this detail by Alex Costenco. 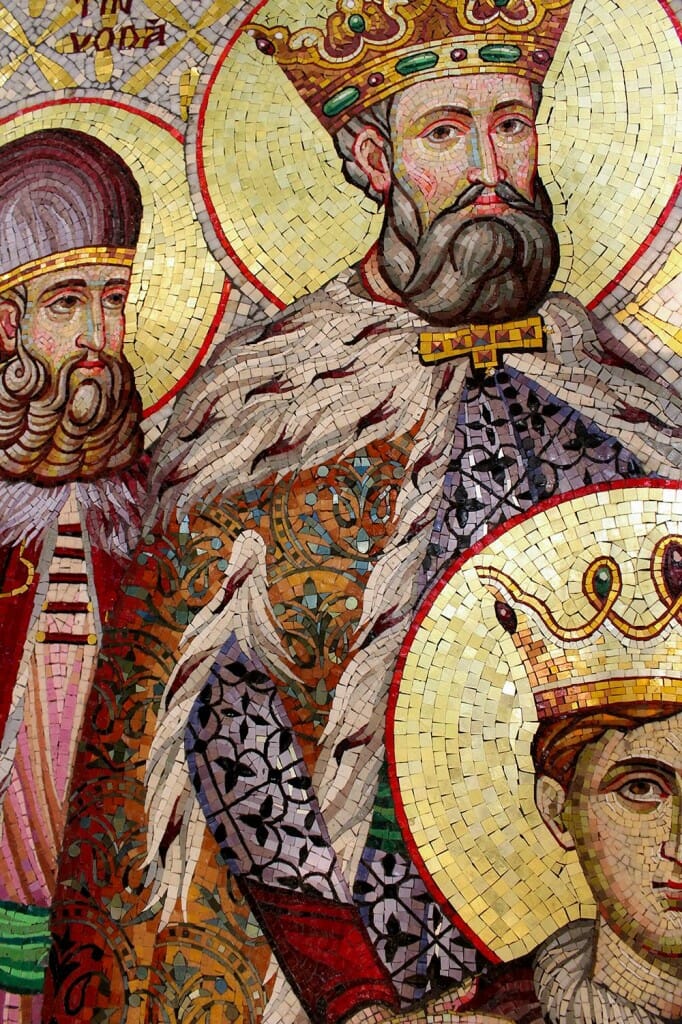 Faces by Anca Sirbu, clothing and crowns by Alex Costenco.

It is always refreshing to see artists so taken up by their work, both anchored in ancient traditions while always keeping their eyes open for ways to make their work better.  For Sirbu, everything they are doing is a process, stages in discovering the most beautiful ways to render Christ and his saints to the glory of God.

The group does not have a website, but one can see more of their work on their facebook page.
https://www.facebook.com/mozaicon 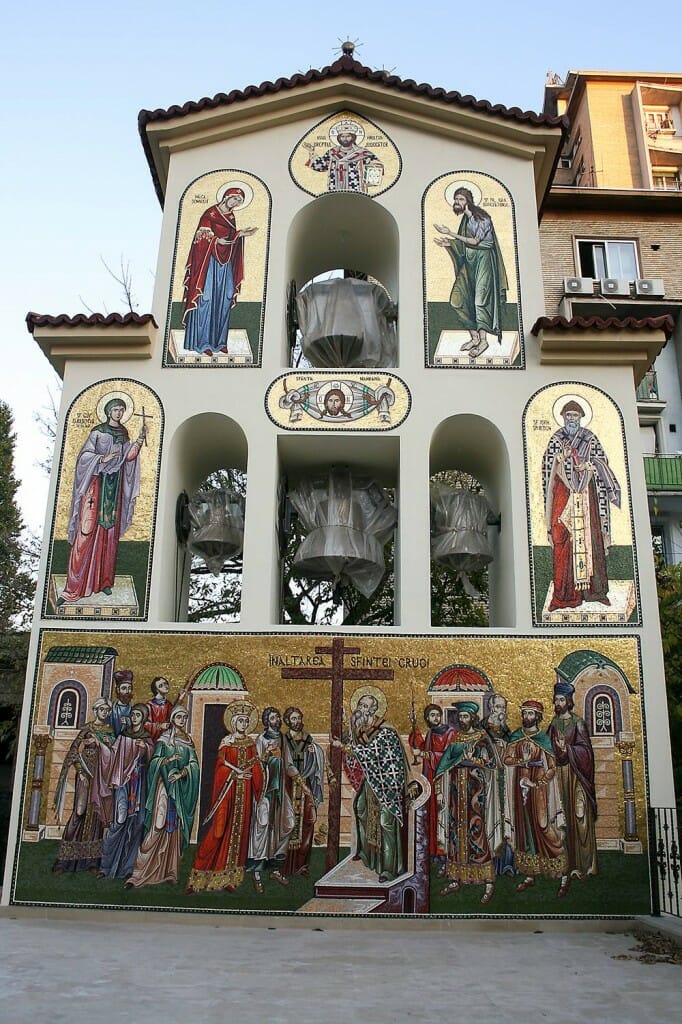 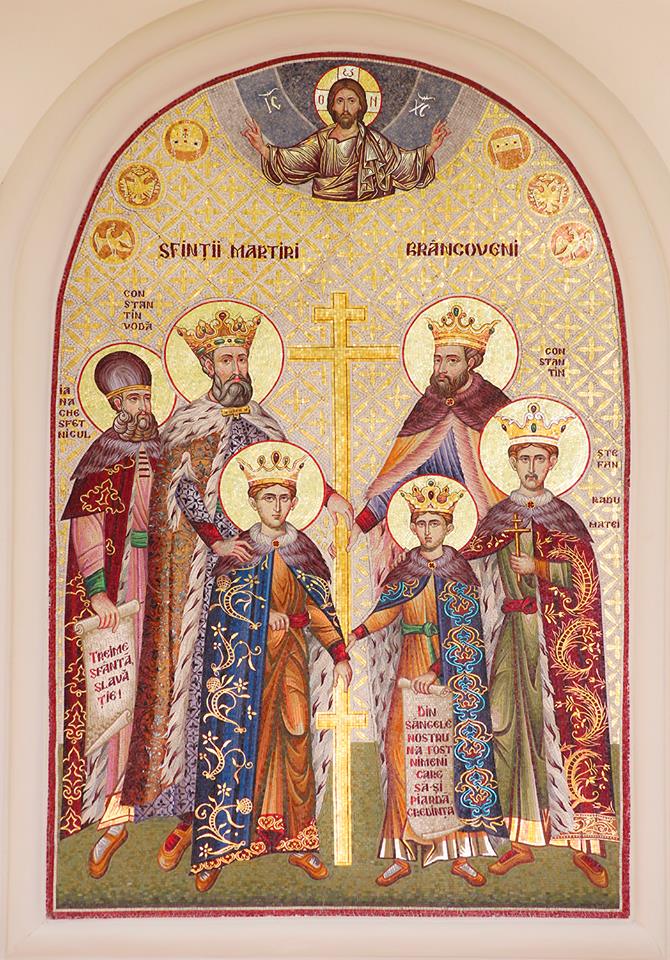 facade of the (New) Church of St-George. Bucharest 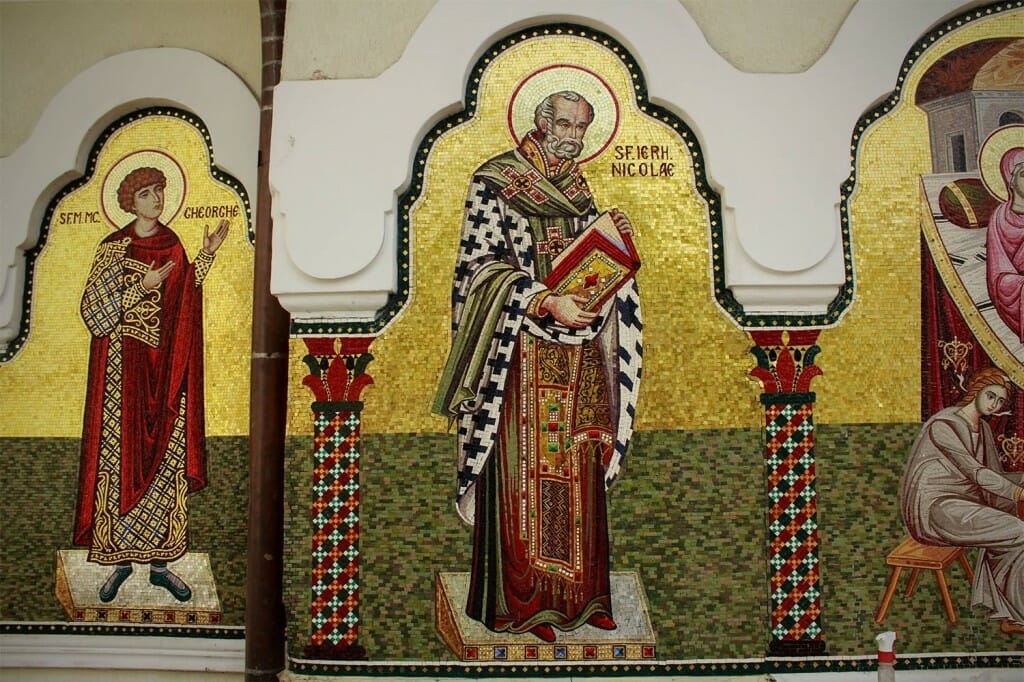 Church of the Virgin Birth, Bucharest 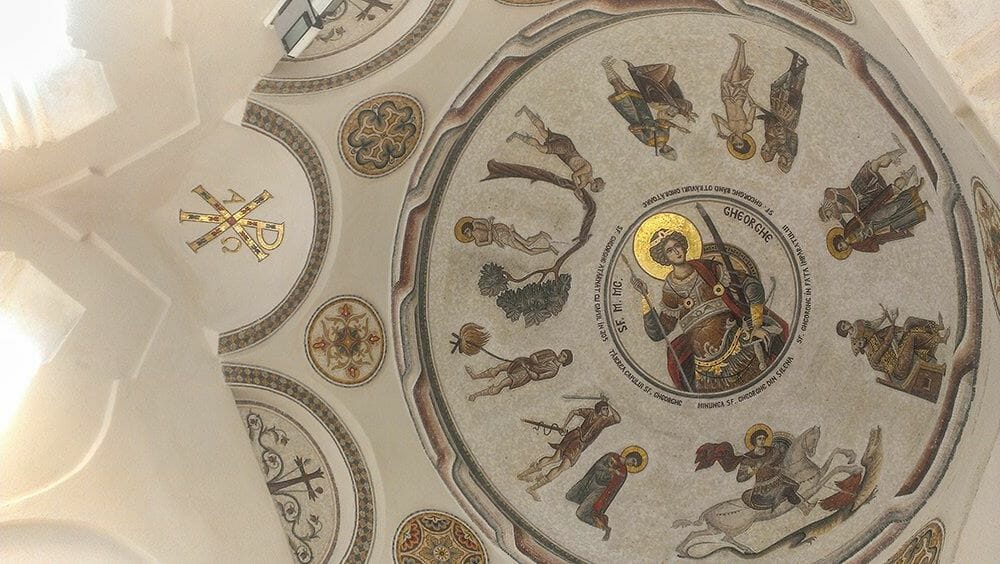 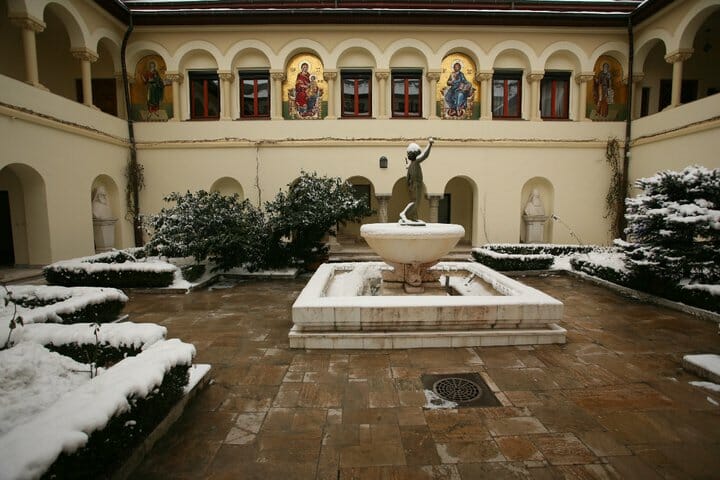 Courtyard at the Patriarchal complex, Bucharest 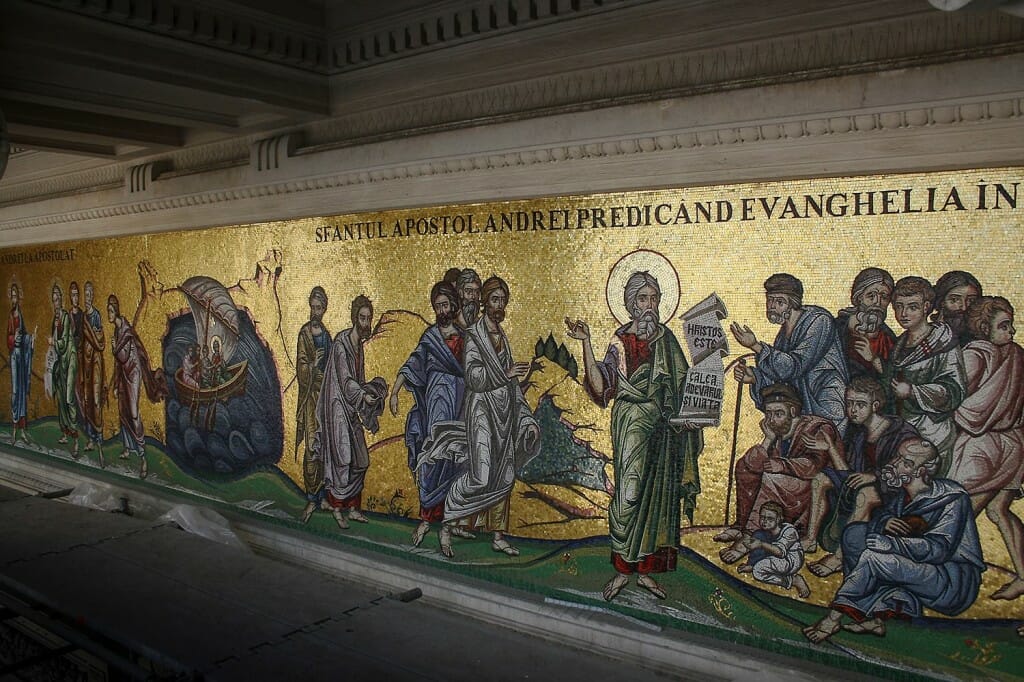