A TALE OF TRANSFORMATION

This is the story of how two large mosaics for St George’s Orthodox Church in Houston Texas came to completion this January. The genesis of a mosaic is a tale of transformation, from sand to glass, to image, to radiant raiment for the transfigured Body of Christ.

Why raiment? Liturgical art is part of the Holy Spirit’s on-going work to gather up the fragmented world and incorporate it into the living Body of Christ, the Church. And this Pentecostal harvesting includes the inanimate material world, for the Evangelists tell us that when Christ was transfigured His garments shone with divine light together with His face.

This is a story where many elements are gathered together to compose a hymn of praise: raw matter; modern technology; vision; the generosity of donors; patience; inspiration and lessons from the past. Even imperfections and mistakes will have their place. 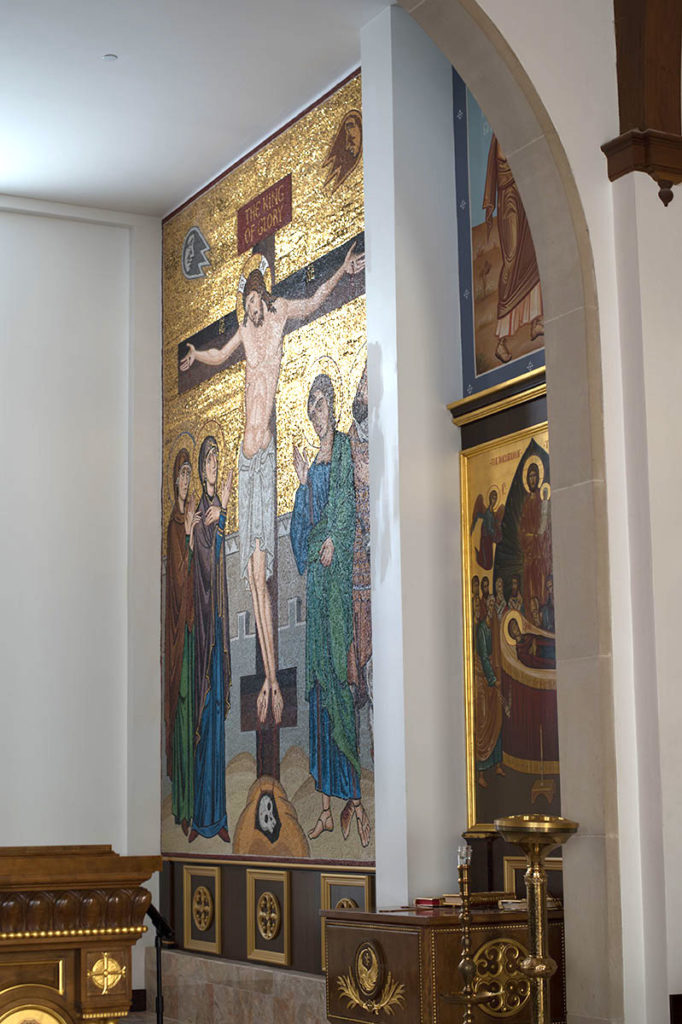 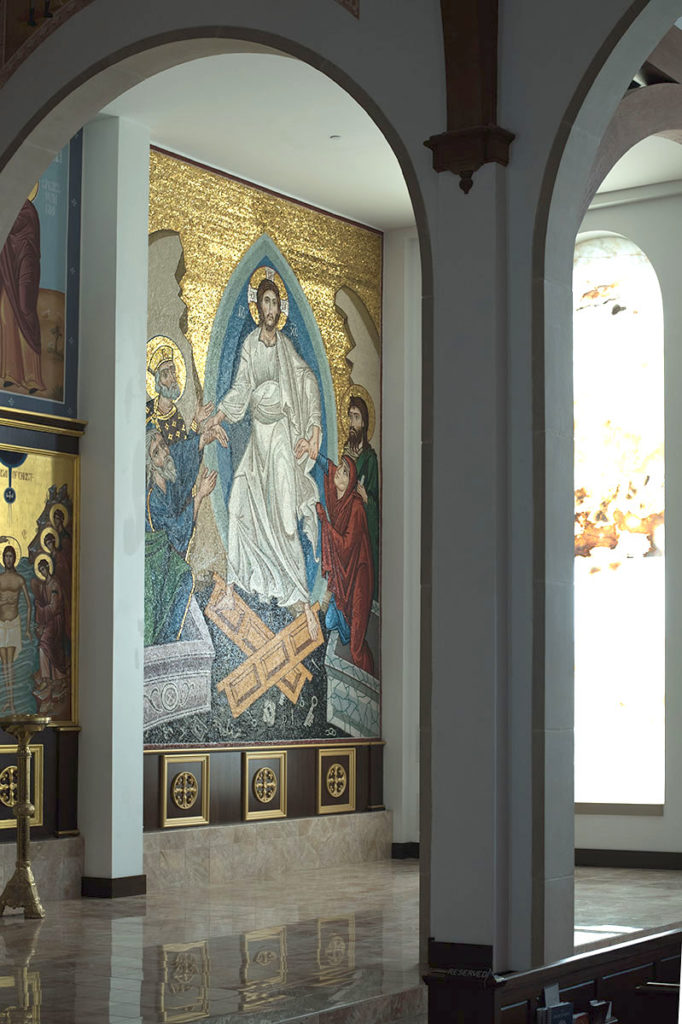 A bulldozer scoops up sand. The sand is mixed with soda ash and limestone and then heated to an incredible 1700° C (3090° F) to make glass.

In an old family run workshop in Venice, Orsoni, this glass is re-melted and metal oxides are added for colour.

The glutinous material is poured onto a slab and squashed, to make a sort of glass pancake, called a “pizza”. This is then cut by hand into the small pieces, called tesserae, that make up mosaics.

Tesserae can be of this coloured glass, called smalti, or of stone. Tesserae are best cut by hand using a hammer and hardy, tools unchanged and un-bettered since Roman times.

The tesserae are ready. They lie in a box in Orsoni’s rooms, like pigments in an artist’s supply shop, waiting to be transformed like words into a poem, like musical notes into a symphony.

Meanwhile a priest in Houston, Father James Shadid, conceives the idea of commissioning two large mosaics to cover the new walls that his church’s extension will create, each to measure 3.6 x 4.8 metres (12 x 16 feet). He already sees the completed works in his mind’s eye, not in their totality, but in general form. The raw materials are ready, and so this idea is the next stage toward the completed mosaics that will, hopefully, shine forth something of Christ’s glory.

The word “idea” is derived from the Greek word idein, to see. The Holy Spirit opens the eye of someone’s heart to see something that both is and is yet to come. In Byzantine writings, it is therefore the originator and the donors who are called the makers – ktitores – and not the craft persons who fashion the final work. The craftspeople are humble servants who are happy to melt into the background when the work is complete – as long as they get more work in the future!

Father James searches the internet for someone to fulfil his vision. In this marvel of modern technology, radio waves shoot up into space carrying Father James’s request to view contemporary mosaics. The waves bounce around a few satellites and return to earth to find his answer in a vast computer bank, somewhere else on planet earth. Radio waves carry the answer back to him in the same way.

On his computer screen he eventually finds a mosaic image of Christ Pantocrator that draws his attention. It was recently completed by a mosaicist 7,500 km (4,700 miles) away, in the countryside of Shropshire UK. The mosaic has the spirit that he is looking for, so he decides he wants this person to make his church’s mosaics. So he emails its maker.

We correspond, and eventually I go to Houston to discuss details. The subjects are to be the Crucifixion and the Resurrection. They will stand to the north and south of the apse, around the Holy Table where all life in Christ both begins and culminates.

No good thing comes without struggle, and eventually funds are raised, both from within the parish and from a generous donor. The next stage of work is ready to begin.

Full scale drawings are prepared. The smalti colours are chosen from Orsoni’s range, and the gold tesserae from nearby Donna Murano, situated on an island in the Venice basin. The smalti are taken out of the darkness of their boxes and sent to my little studio in Shrewsbury, UK.

Principles and tricks of the trade

For many years I had been researching mosaics in Constantinople, Rome, Ravenna and Greece, to try and learn their secrets. I have also studied under the master mosaicist in Ravenna, Luciana Notturni. From all these sources I learned that there are principles common to all the medieval masterpieces. My assistant Martin Earle and I had tried to apply them to the mosaic of the Pantocrator we had recently made, and that had drawn Father James’s attention. But now these two much larger mosaics offered an even greater opportunity.

What are these principles?

Our Cardiff mosaic had been for outside use, and therefore required grouting to stop frost destroying the work. In that exceptional case we had angled the tesserae somewhat less, but nevertheless enough to make the light dance. But since this Houston mosaic is for inside use, no grouting is required, so we incline the tesserae as much as aesthetics demand.

Medieval tesserae also have more bubbles, many are slightly more translucent, and the gold tesserae are less flat, their cut less regular, and their gold leaf often fractured.

These are other factors that guide us in choosing the smalti, apart from colour.

A common solution was to design the mosaic for economy of line in the first place. Although there are masterpieces, such as the famous gallery deisis at Agia Sophia, that are very detailed and painterly, most medieval works are created with economy of line, with andamenta of fairly even width and not many triangles.So we design our elements, such as hair, with this in mind.

The parish want to be able to move the mosaics if the church is ever reconfigured in the future, so we make the mosaics in sections in my studio, like a giant jigsaw puzzle. The panel shapes are carefully chosen so the joins coincide with transitions in the design, such as the outlines of figures and buildings.

The tesserae are to be fixed to a high tech composite panel, strong but light, variously called Cellite or Aerolam. This is a very light and rigid system used in the aircraft and aerospace industries, made of fibre reinforced epoxy resin panels sandwiching an aluminium honeycomb core.

With epoxy resin we glue a layer of coarse sand to the front surface of the panels in order to give the mosaic mortar a rough surface on which to key.

For simpler areas of the mosaic, like gold backgrounds and buildings, we set the tesserae directly into the adhesive. We use a superior quality cement and lime based adhesive, Adesilex P10, made by Mapei. We add to it a plasticiser and fine fibre for extra durability.

For more complex areas, like flesh and garments, we need more time to make adjustments than the Adesilex allows, so we use the ‘Ravenna Double Positive Method’ taught me by Luciana in Ravenna. This is the process:

The journey to Houston and installation

All the jigsaw puzzle pieces are completed, crated, and shipped by plane to Texas. Martin and I arrive in Houston on January 2nd, to spend a month of intensive work to attach the twenty-seven panels to the walls and fill in the gaps with tesserae.

We fix the panels using stainless steel screws and washers, screwed into large plastic Rawplugs in the concrete block wall. In the studio we deliberately left the areas around the edges free of tesserae, so now that all the panels are in place we can fill over the joins and make them invisible.

The work in Houston is very much a communal effort. Father James and his wonderful family give us splendid hospitality in their home; the parish provides great lunches to keep us going; we have the help of various budding mosaicists, including 14 year old Ada Germany from Philadelphia and Baker Galloway from Austin Texas; Octavia the secretary keeps things flowing smoothly, and even puts on an English high tea for us Brits; Alvera the handyman buys whatever extra tools or materials we need… the list goes on.

The liturgical garment is completed. The worshiping Body of Christ at St George’s parish is adorned with matter made radiant. Before the Holy Liturgy, wheat and grapes are transformed by human labour, and at the Liturgy these are offered to become the Body and Blood of Christ. Here, glass remains glass, but it becomes an image of the risen Christ. Through human love, glass sings the praises of God. “I tell you,” Christ said, “if these disciples of mine were silent, the very stones would cry out.” (Luke 19:40) 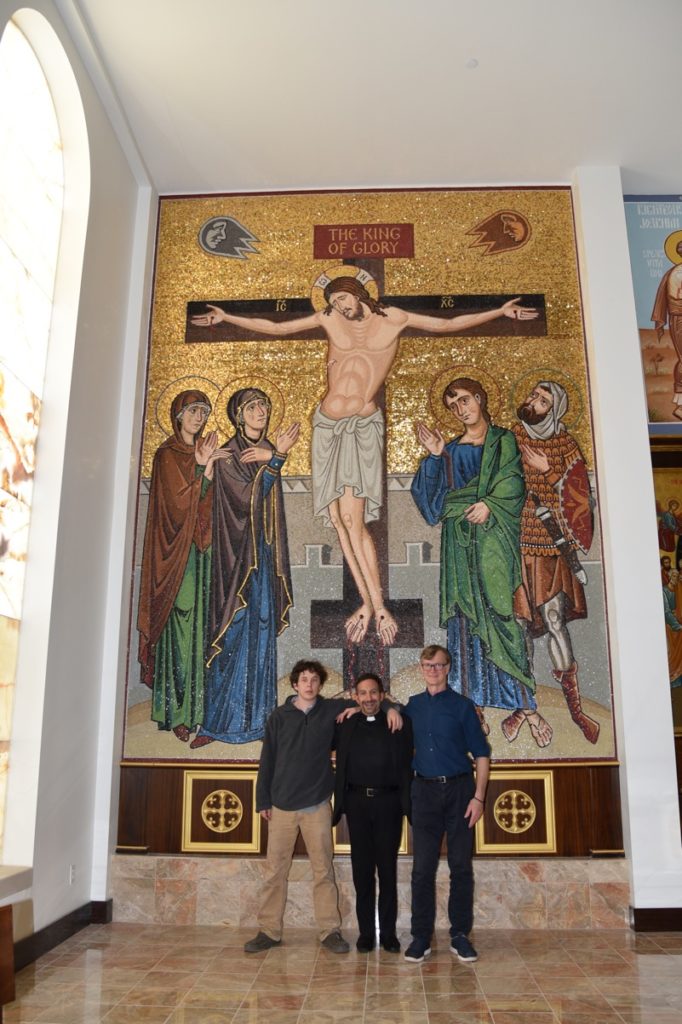