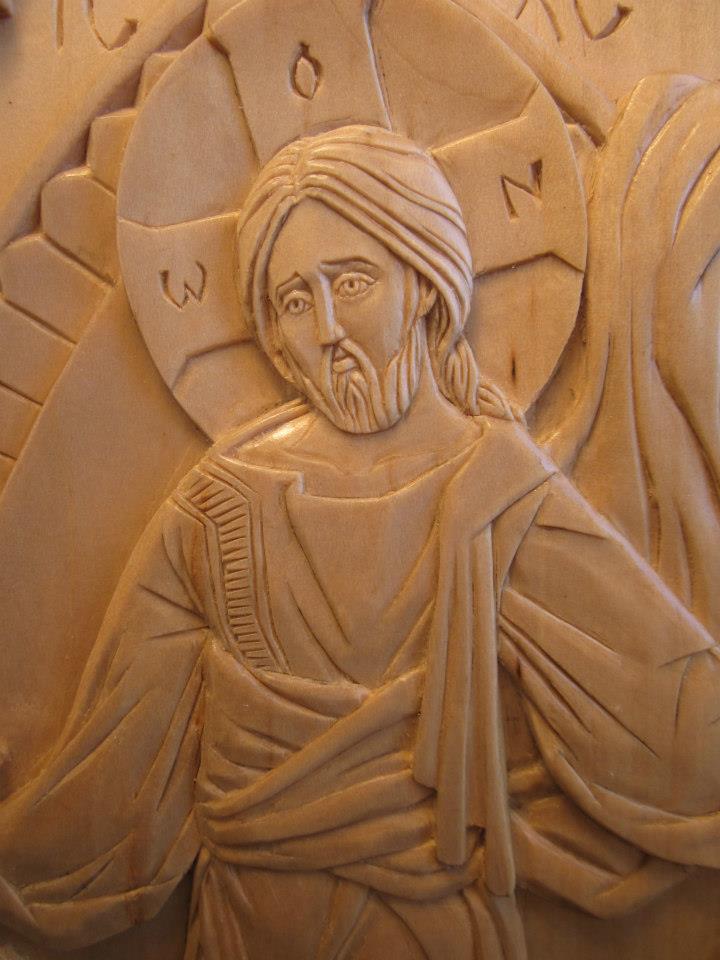 Jonathan Pageau. Detail of Christ from a panel icon of the Anastasis

Icon carving is an art which has been experiencing a great renewal in Orthodoxy all across the world.  In the last 15 years we have seen several amazing icon carvers appear, with Aidan Hart in England, the Azbuhanov couple in Russia.  The art of miniature carving has also been  finding  a quality it had lost in the last few centuries.  I have shown some Serbian carvers here as examples of that, George Bilak and Branislav Derkovic.

Because of its particular tactile and durable quality, relief icons were once the art of choice for highly manipulated objects such as book covers, pectoral crosses, processional and altar crosses, sarcophagi and reliquaries.

Whether carved in wood, stone, ivory or cast in metal, these objects are a rich part of our spiritual heritage.  Besides liturgical objects, relief icons were also used as portable icons, just as those we see painted today.  They were particularly prized as travel icons, but they also decorated church walls in Russia and were integrated into iconostasis. Though icon carving has been such a rich part of our tradition, time and circumstance have been quite cruel to the art.  Ivory and soapstone carving were once a integral part of the Byzantine Empire, though with the fall of Constantinople and the Orthodox being gradually cut off from the great trade routes, this art almost disappeared from Mediterranean Orthodoxy.  As this was happening, wood carving was taking off in Russia.  Russian carved icons became so prominent, some have said they were almost more numerous than painted icons in the 16th century.  During the 17th century, Patriarch Nikon in his sweeping reforms, forbade three dimensional sculpture in churches.  And in the 18th century, the Czar in his constant desire for westernisation, made an unfortunate pronouncement.  He said that because of the lack of skill of the carvers (by which he probably meant the lack of “naturalism”), carvings should not be used at all in churches.  All of this created a kind of furor, interpreted as a blank condemnation of anything carved, Russian carved icons were ripped out of churches and thrown into the fire.  The surviving examples show us how beautiful, simple and spiritual those Russian carvings were. 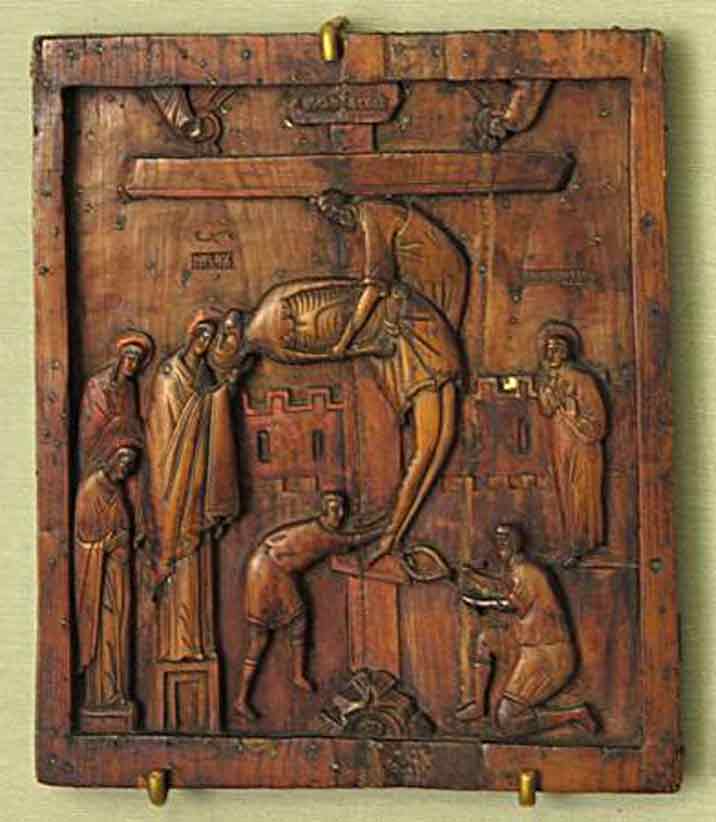 It has now been a few centuries since the whirlwind of modernism started shaking Russia.  It seems only fitting now, as Russians rediscover their ancient faith, as the Russian Church grows new wings, that the ancient art of icon carving would also be reborn.

I have been trying to play my small part in this process.  Because ivory carving is mostly inaccessible to us today, I have worked to re-establish steatite carving.  Steatite carvings were used interchangeably with ivories in the Byzantine Empire to make book covers, pendants, portable icons, etc. 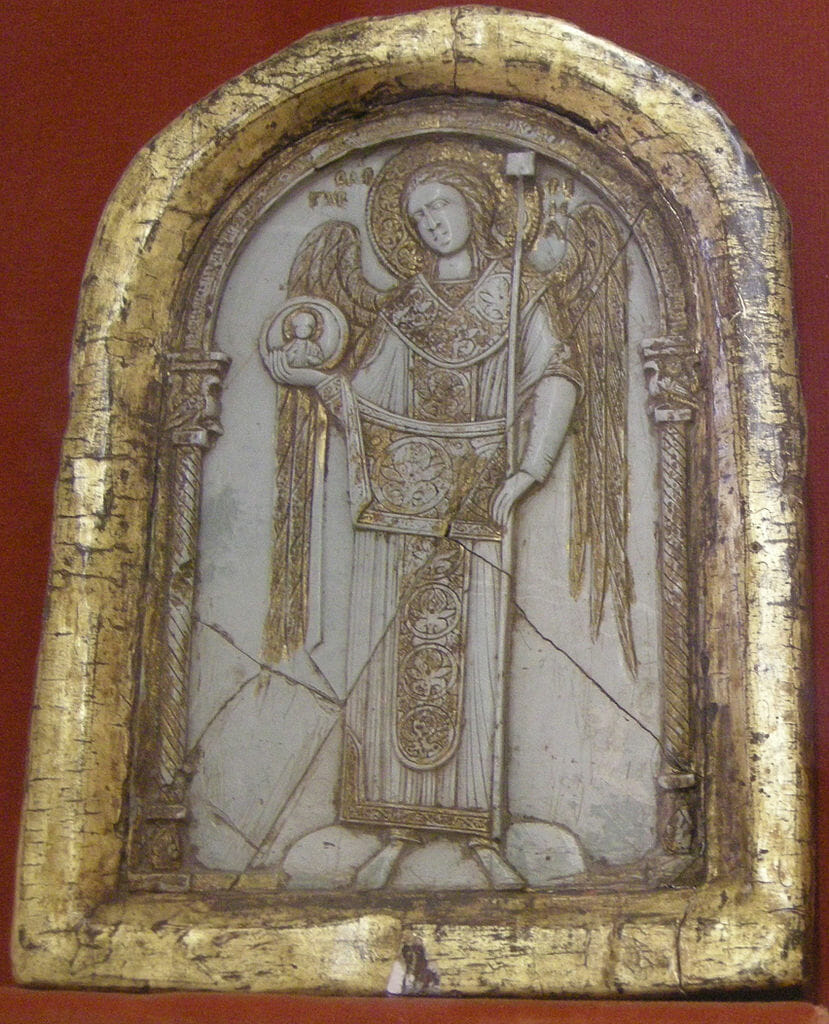 I lived several months with steatite carvers in Africa trying to adapt their tools and techniques to the art of icon carving.   Since then I have worked with several patrons and in collaboration with Andrew Gould of New World Byzantine to create complex steatite objects such as book covers, pendants, chalices and reliquaries. 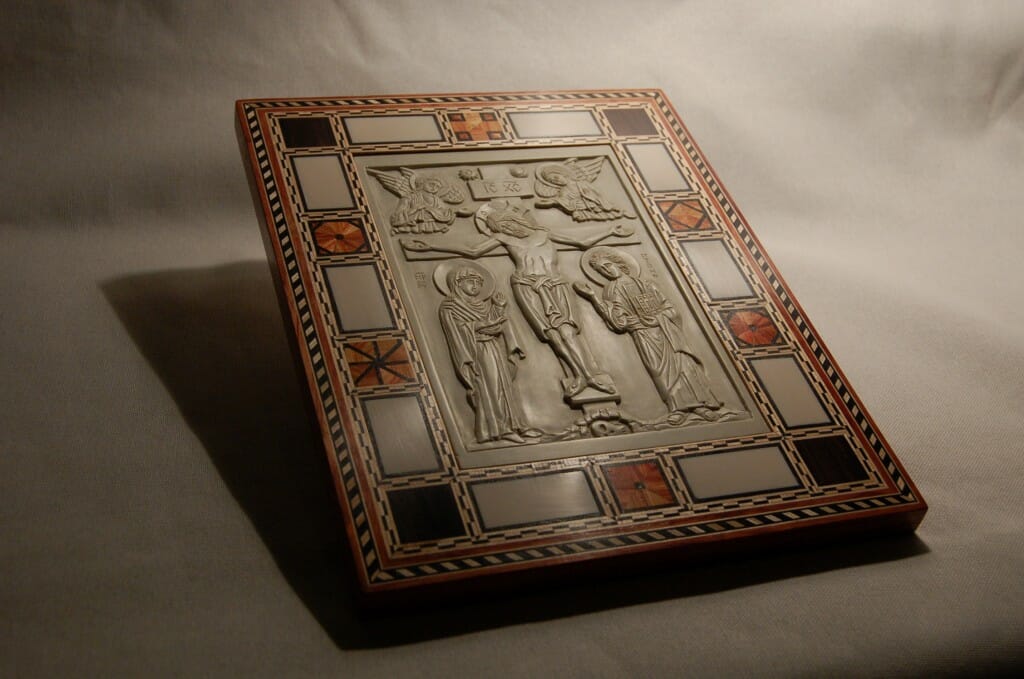 Steatite gospel cover with a ivory and marquetry border. Design and frame by Andrew Gould. Icon by Jonathan Pageau 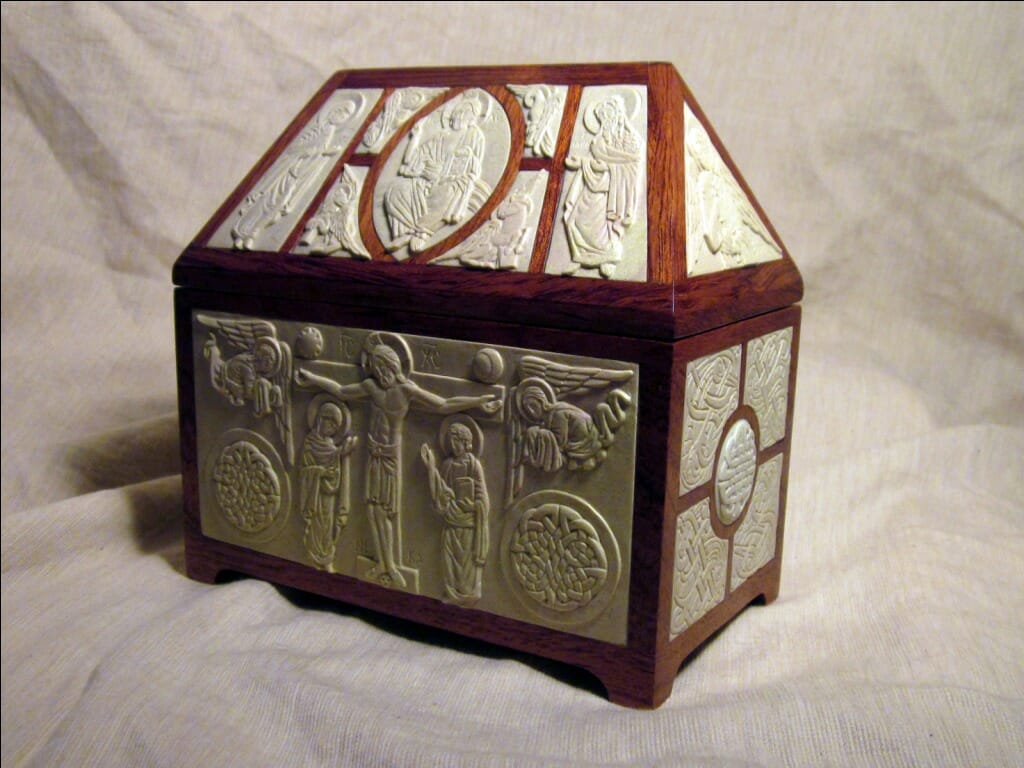 There is great joy in carving icons. It is a skill and experience quite different from the painted icon by its directness, its physicality and its particular visual language.  It is this joy and skill I wish to bring to the workshop Hexaemeron is organizing in Maggie Valley NC this October, 2013.  This workshop is for those who have the courage and vision to see this art fully be reborn in the Church. 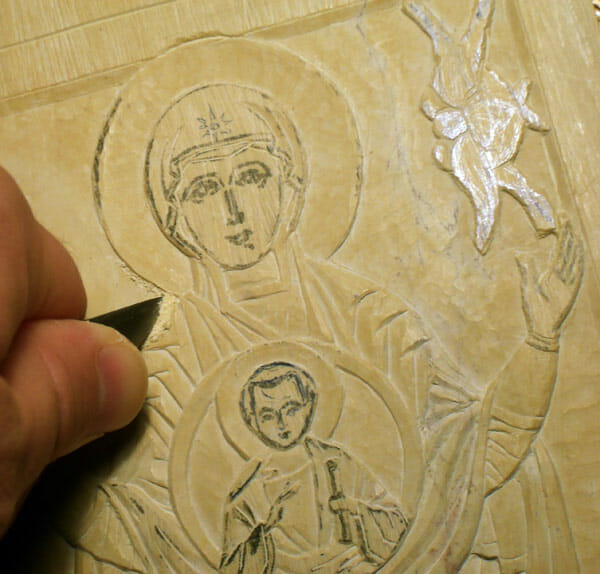 In this workshop we will be looking at the visual language of carved icons, how to adapt in a carving the shapes and grammar we are used to seeing in painted images.  I will make wood and stone available for those who want to try either or even both. I want to be as flexible as possible, seeing some might want to make a blessing cross, while others would prefer a portable icon. Hopefully by the end of the seminar, most of participants will have a finished icon to bring home with them. 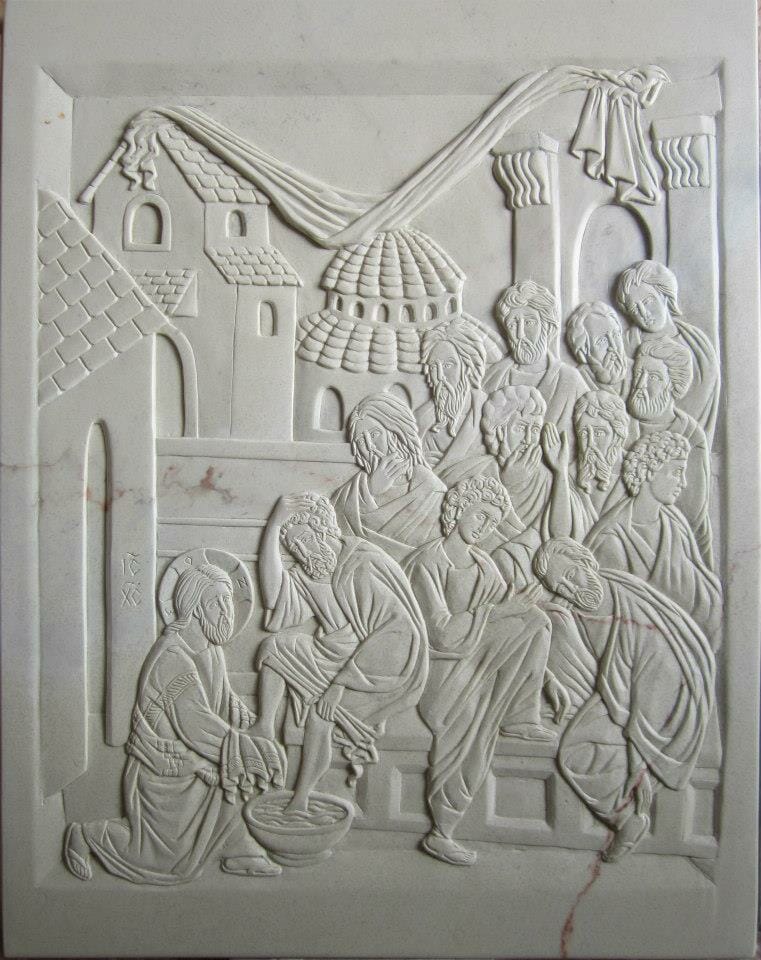 Steatite icon of the Washing of feet. Jonathan Pageau

There are not too many areas in Orthodoxy where we can be both completely traditional while simultaneously acting as trailblazers.  Icon carving is one of those areas.  And so I invite you to join me on this journey, for a week of cutting away wood and chipping away stone to uncover the hidden icons in creation.

For those who would like to see what it looks like to carve icons, please view my short video.