Heaven and Earth in The Icon 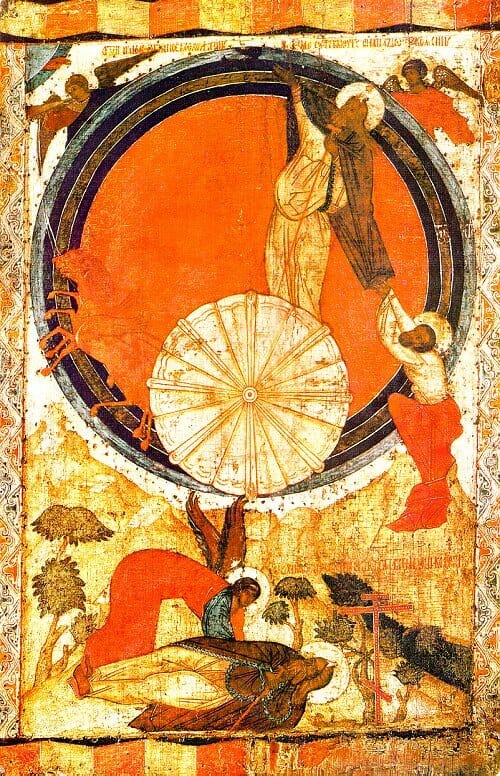 This is the third part of my reflections on cosmology.  Part 1: Most of the Time the Earth is Flat.   Part 2: Where is Heaven?

One of the main purposes of the icon, in its imitation of our Lord himself, is to participate in connecting Heaven and Earth. By making visible in earthly terms — in people, events and things — a glimpse of heavenly truth, they lead us towards the transfiguration of the world. This transfiguration is beyond words of course, but like all mystical truth, we can nonetheless skirt around it, point to the edges of this vision in order to help us participate in it more fully.

This possibility of uniting Heaven and Earth is anchored in the Christological definitions of the Church, in the duality of Divine and Human natures united into one person. Even before looking at specific examples of icons, the Christian possibility of the Icon itself is already an “icon”, is already an image of Christ’s uniting of Heaven and Earth. This takes on a particular emphasis because unlike music, liturgy or poetry, the icon is a fully spatial experience, which just as all images presents itself completely in an “instant”. Therefore the spatial analogy of the relation between Heaven and Earth is captured more immediately and more explicitly in the icon than in other liturgical arts. The Icon is of those places where the scandal of the incarnation is most plainly seen, which is probably one of the reasons why the icon has been a source of great celebration and great conflict in the history of Christianity. We could say that all through the life of the Church, the “ability to unite the realms of heaven and earth remained the key to the theological mystery of icons and allowed them to weather the severest theological, psychological, and emotional storms.(1)”

And so within the very structure of the icon, the relation of Heaven and Earth is visibly present, present in the most simple and obvious way, so simple that its profound significance can easily be looked over. In several icons, especially those which represent scenes, like festal icons for example, the visual space is organized in a simple hierarchy. Heaven is above. Earth is below, the world is everything in between. The top of the icon becomes the limit of the visible “quantifiable” world, leading to invisible spiritual truth — Heaven in the metaphysical sense of pure “act” or invisible “logoï”. The bottom of the icon becomes the limit of what we could call the visible “ordered” world, leading to chaos down below — Earth in the metaphysical sense of pure “potential” or invisible “matter”. Hades, death and all its mysteries are underground and angels, theophanies and divine light come from the heavens. Everything between the top and the bottom of the icon is the world itself, the created Cosmos which can be accessed through image and symbol. And that Cosmos is itself organized to show that very relation of Heaven and Earth, so what is visibly above in the icon can often show us the invisible Heavens, while what is visibly below in the icon can show us the invisible Earth. 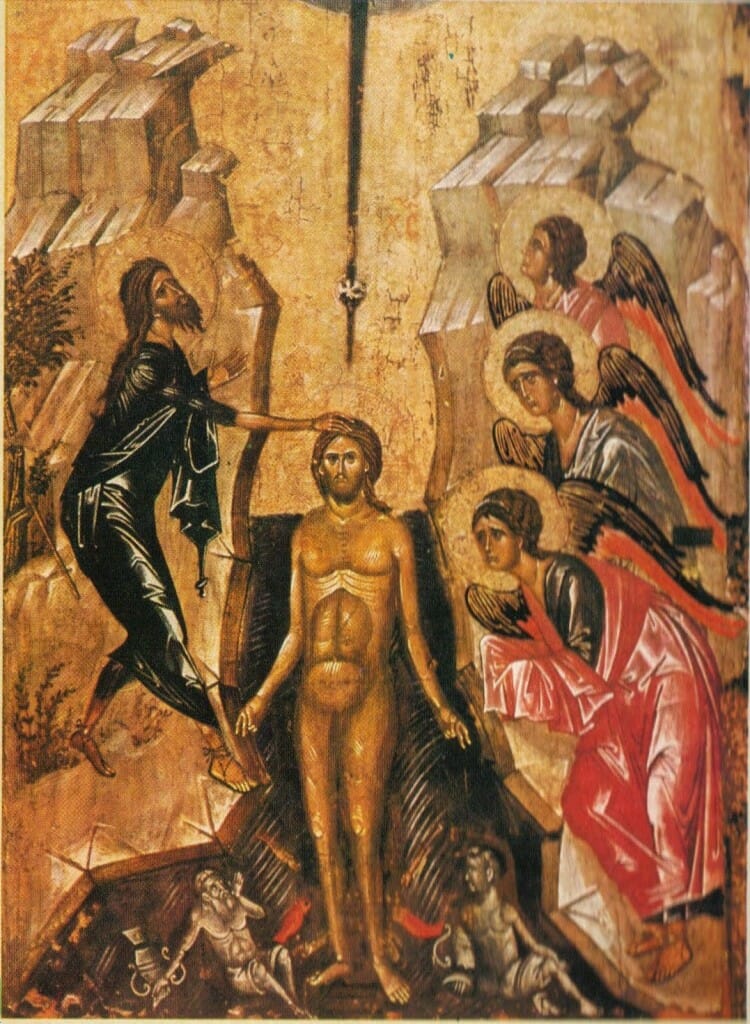 Icon of Theophany. The hierarchy of space is clearly seen, the divine ray shines from above, and the deep waters, the “tohu bohu” of primordial Earth are down below.

We could say as a basic general truth (though there are always exceptions) that the icon is organized as a ladder, and by its flat depiction of a hierarchical space shows us what is meant by Heaven and Earth, shows us WHY we say God is in Heaven and why we say Hell is in the Earth. Some might find I am multiplying words to state the obvious, but this is where I need to remind the reader once again of our schizophrenic cosmology. This is where I need to remind the reader that most of us, most of the time, live in a world where TV satellites and jet planes are in the Heavens and we have ceased to see how the visible Heavens are the image of invisible spiritual truth. The icon does what modern science cannot do, that is the icon does not attempt to give a technical description of a space and movement we cannot experience without complex idealizations and sense increasing machines, rather it shows us the meaning, the reason of our most immediate human experience.

Above and Below, the visible relation of Christ in Heaven and the Church on Earth is the most simple image of the icon itself.

We need to be aware of this, because we often hear that the icon represents “transfigured” reality, that it represents “spiritual” truth, but these types of statements can often become facile and empty blinders that prevent us from seeing what is actually there in an icon. Our statements about icons as “windows” to Heaven can become a glare in that window which makes us think we see without really having to look. It is only if we look with reverent eyes both at the icon and at the world around us, that we may begin to see the Light of Heaven shining through the dense Earthly sphere.