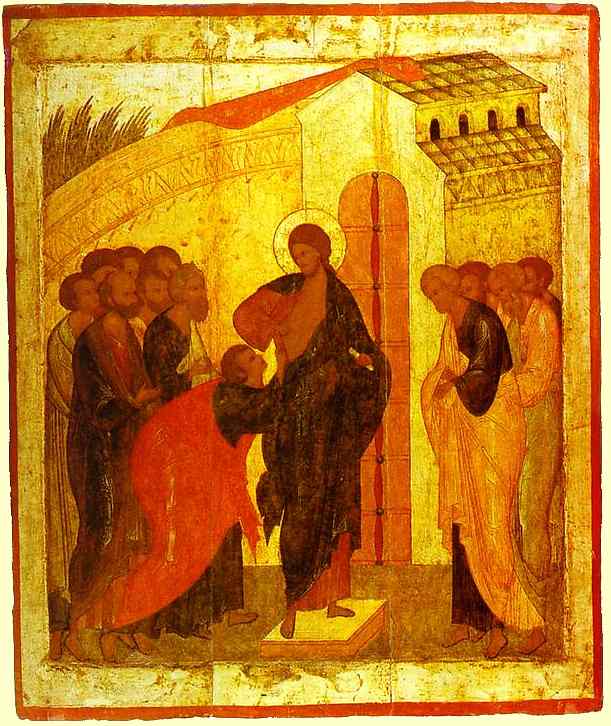 Half the Icon, Subtle Docetism

image ascends to the prototype. However, this considers only half

the icon. As St. Theodore says,“its not admissible to call

something material.Therefore, since we confess that Christ has the

relation to prototype, like any other individual, He undoubtedly

material. Otherwise He would lose His humanity,if He were not

seen and venerated through the production of the image.”54

Abstracting the icon as a purely visual or ocular “image”

disembodies and truncates its theological implications and

overlooks the crucial role of matter in the Incarnation.We risk

sounding like those who said, “It is sufficient that He should remain

in mental contemplation.”55 St.Theodore said it is crucial that:

“ … we depict His human image with material pigments. If merely mental contemplation were sufficient, it would have been sufficient for Him to come to us in a merely mental way;and consequently we would have been cheated by the appearance both of His deeds, if He did not come in the body, and of His sufferings, which were undeniably like ours. But enough of this! As flesh He suffered in the flesh, He ate and drank likewise, and did all other things which every man does, except for sin.”56 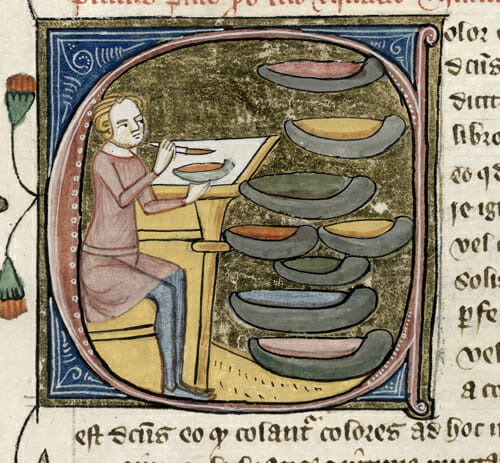 Medieval writings assume a regard for the individual characteristics, or “glory,” of each individual pigment, regarding them as jewels harmoniously arranged in a complicated setting.

Ingredients given by the Creator best communicate the icon’s

symbolic message.They confer a beauty not attainable through

synthetics: “For from the greatness and beauty of created things the

Creator is seen by analogy.”57 When synthetics are unavoidable or

advantageous, it is incumbent on the iconographer to ensure that

they not disrupt the harmony or theology of the icon. It is naïve to

alters and shapes raw materials.This either degrades or uplifts

matter, depending on the craftsman’s inner state and his awareness

of the Sacred in all things. Emphasizing the importance of

hand-made icons is not a matter of disdaining technology per se,

but rather is about how to discriminate among technologies and

discern their appropriate use. It should also be noted that the terms

usually taken to be dead, flat,or garish, but traditionally

manufactured “artificial”pigments have a subtlety and beauty of

tone that render them “natural”in comparison to contemporary

of the first,though bright,is gentle in effect, while the second

tends to be too bold and harsh. Nature’s unmatched beauty is in its

imperfection, while the ugliness of manufactured materials is in its

monotonous uniformity. We tend to conceive of color as a

decides how to grind pigments to obtain the desired texture and

allows materials to manifest inherent qualities by not tampering

with them.The traditional attitude to the “glory”of each pigment,

coming from an awareness of the sacramental dimension of matter

and craft, clearly seen in the medieval workshop, is described by

“In modern painting methods, subtle differences in the characters of

pigments tend to be submerged. In oil painting it does not make very

earth red in color. Modern oil paint has so much [subsidiary]

however, the separate pigments tend to be exhibited with emphasis,

almost like jewels in a complicated setting. Fine colors were so hard

degrade them by indiscriminate mixing. The palette was treated

almost like a collection of precious stones, to be grouped in the

painting with as much regard for their intrinsic beauty as possible.

individualities of the pigments; for they were unobtrusive in

themselves. Medieval writings assume a regard for pigment

characters, an interest in the fatness or leanness, coarseness or

medieval painter was aware of the special qualities of his particular

colors as a musician of the special qualities of instruments and