When the Archbishop of Canterbury met with the Pope of Rome in mid-June, they exchanged gifts. Archbishop Justin Welby presented Pope Francis with an illumination of the Pope’s motto, taken from the Venerable Bede’s homilies on St. Matthew’s Gospel – “Miserando atque Eligendo“  – in the context of the original, it is taken to mean “lowly but chosen”. Exchanges of this sort  are common when clerics visit the Vatican. However, this particular exchange is particularly important to the Orthodox Arts Journal. The illumination is the work of our own Christabel Anderson. 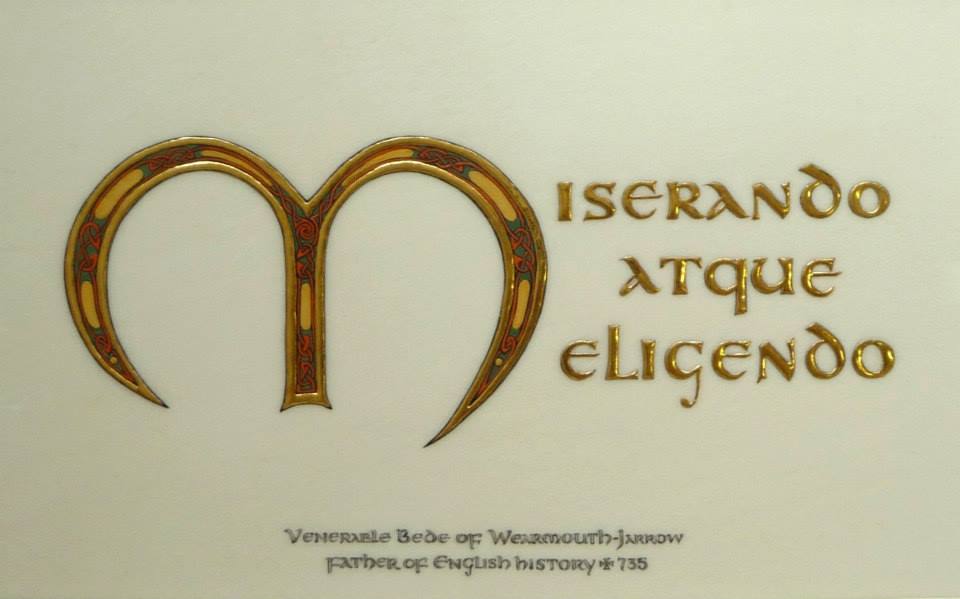 Miserando atque eligendo – by the hand of Christabel Anderson 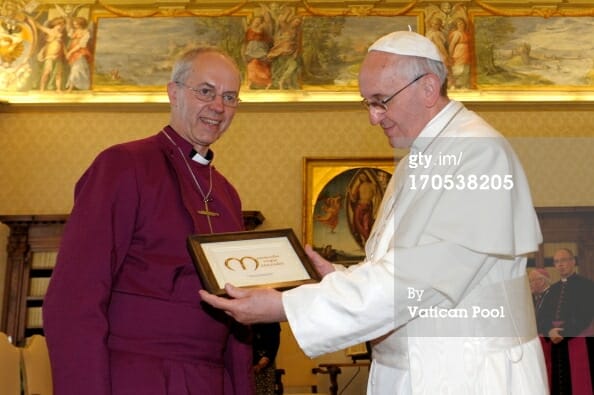 Below is a further description of the illumination by Mrs. Anderson herself:

The design for the illuminated text of ‘Miserando atque eligendo’ was inspired by two early 8th century illuminated manuscripts, the Codex Amiatinus and the Saint Petersburg Bede, which were created at the Venerable Bede’s monastery of Wearmouth-Jarrow in Anglo Saxon Northumbria in the north of England.

The uncial letterforms for the illumination were inspired by the calligraphy in the Codex Amiatinus, which is the earliest surviving manuscript of the Bible in the Latin Vulgate.  It is considered to be the most accurate copy of Saint Jerome’s text, dating to the beginning of the 8th century, and is kept in Florence at the Biblioteca Medicea Laurenziana, catalogued Cat. Sala Studio 6.  Three copies of the Bible were originally commissioned by the abbot Ceolfrid in 692 and the Venerable Bede is likely to have been involved in their compilation.

The design for the illuminated letter M was inspired by the earliest historiated initial in European illumination, which is in the Saint Petersburg Bede.  This manuscript is traditionally dated to 731/732 to 746 and is a near-contemporary version of the Venerable Bede’s 8th century Historia Ecclesiastica Gentis Anglorum  (Ecclesiastical History of the English People).  It was taken to the National Library of Russia in Saint Petersburg at the time of the French Revolution and is catalogued Lat. Q. v. I. 18.

The materials for the illumination were also inspired by early Northumbrian manuscripts.  It was created on vellum with hand made watercolour paints in minium (red lead), vergaut (woad and orpiment) and Naples yellow (yellow lead), iron gall ink, made in London, and twenty four carat gold leaf, beaten in Florence.