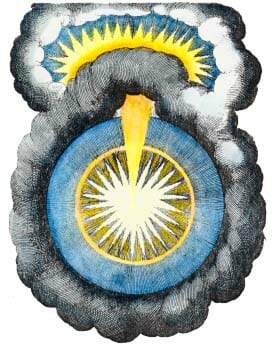 A foundational symbolic principle of the icon is that all things are permeated with the Uncreated Light.

Although the technique of egg-tempera is ancient and predates the Christian period, it providentially has been adopted and retained by the tradition of icon painting. Encaustic was used but soon abandoned,which further confirms that not all methods have been deemed suitable by the tradition. Egg tempera tends to lend itself to a linear style that requires clear definition of form and austere precision of execution based on preliminary, well-articulated drawing. It does not lend itself to the blending of colors since it quickly dries. Therefore, it involves a long process of translucent layering and successive arrangement of geometric tonal areas for the development of plasticity of form. This makes it suitable for abstract, abbreviated, or symbolic representation. During the Renaissance, naturalism became the main focus in the West, with its emphasis on delicate modeling of tone, sensuous forms, blurry sfumato, and dramatic chiaroscuro. The West abandoned egg tempera as unsuitable for naturalistic painting and replaced it with oil painting, a method more appropriate for empirical concerns.

As with other objects we encounter in worship, traditionally hand–painted icons speak a symbolic language in which we can find “uplifting explanations” not only in the images, but also through the unique property of the materials and methods used to depict them.This is clearly evident in the use of gold, which is a symbol of the Uncreated Light, but also in the egg tempera medium, which in its translucent nature is a symbol of matter as theophanic – not purely dense or opaque, but shining forth the glory of God. It could be said that these “uplifting explanations” have been arrived at after centuries and were not necessarily themselves the motivating factors in all the choices of materials, because these were primarily practical. Nevertheless, they attest to the fact that the traditional medium has been preserved since its inherent properties do not hinder iconicity or the anagogic function of the icon, but rather facilitate them. Both practical and theological concerns harmonize, as they do in all aspects of traditional liturgical aesthetics. Hence, egg tempera makes the icon, as compound symbol, a most lucid mirror of the mystery of the Incarnation. It does this in ways that oil painting fails to since the oil painting was invented as a practical answer to the demands for naturalism, which sees matter as opaque and reality as solely an object of sense perception, disconnected from divinity. Therefore, there is a providential dimension to this choice of medium that cannot be seen as purely arbitrary, thereby rendering the traditional medium unalterable by willful or random choice. Let us now see how we can “read” this method of craftsmanship. 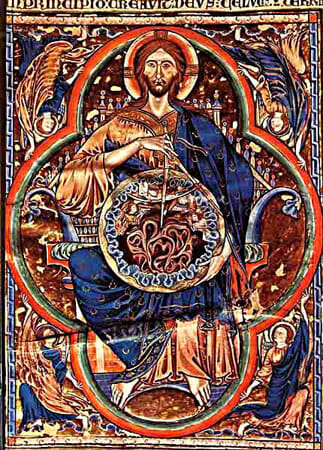 In a symbolic fashion, the iconographer imitates the primordial act of the Divine Craftsman.

The foundational principle of the icon’s traditional craftsmanship is Christ‘s proclamation: “I am the Light of the world.”45 Therefore, the various stages of the painting process can serve as supports to the craftsman for the contemplation of this great mystery.This in turn enables us to move from the immediate activity to an awareness of the inner man – outer work becomes inner work. Thus, not only does the finished icon serve to uplift, but the craftsmanship can become an anagogic discipline. The act of painting reenacts Creation,46 represents levels of being, and depicts man’s return to his divine likeness. The white surface designates the mystery of the divine Mind (Nous) in which archetypes(logoi) are inscribed by His will. The divine inscription is the drawing. The application of red clay (bole) for gilding represents Adam‘s corporeality and gold represents his nous, the divine image in him. The first layer of paint is the formlessness before the fiat lux. The paint is made by mixing egg emulsion with dry powder pigments. The egg is symbolic of immortality, generative power, and the Giver of Life “Who is every where and fills all things.”47 As pigments are mixed into the emulsion, light is reflected, absorbed, or refracted, being embodied and becoming color.This is symbolic of the paradoxical “union without confusion”48 of the Transcendent becoming immanent. Each pigment has a unique property (a texture or “body”) given by its particles that affects us with its inherent energy. Through the translucent layering of color, subjects are purged of gross corporeality. They become vessels of light that are unrestrained by the limitations of matter, as how the Lord revealed Himself after the Resurrection. Further, the image is built from dark to light, calling to mind the coming into being ex–nihilo and the process of sanctification from the passions to deification. Passing through the layers, light is reflected from the gesso, bouncing back to the eyes, providing optical richness, depth, and a glow like stained–glass, which is symbolic of the glorified body in the Resurrection and the Eschaton:

“Then the righteous will shine forth as the sun in the kingdom of their Father.”(Mat. 13:43)

“The city had no sun or the moon to shine it, for the glory of God illumined it. The Lamb is its light.”(Revelation. 21:23)

The craftsman incorporates all these layers of material properties and meaning, as just described, and fashions a one-of-a–kind object (a compound symbol) with qualities inimitable and unrepeatable by any other human or machine.The finished object bears the record of an act of cooperation with divine energy. It becomes a “body”within the liturgical context and in the Pauline sense, manifesting the glory of both created and uncreated energies. The icon becomes a precious stone that beautifies the altar of divine glorification and affects those who gaze and interact with it. It shapes and “colors” them spiritually, helping them to move beyond the “letter” of the senses towards “uplifting understandings.”

Now, let us see if we can distinguish rhinestones from diamonds. 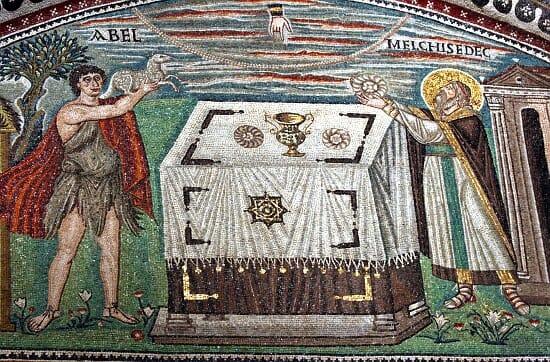 “Thine own of Thine own…” In a priestly fashion the iconographer offers back to God matter transformed.

As we have seen, the hand painted icon communicates theology through the inherent property of materials and craftsmanship, becoming a unique compound symbol. Let us look now at the degraded iconicity of the reproduction. When regarded as a mere ‘picture’ or illustration, the icon is disconnected from the significance of the stuff of its making. The iconographer is then regarded as just another duplicating machine. We get less in return for cheap and fast results. Reproductions render inaccessible the traces and indications of arduous labor, the living, creative energy of the painter’s hand49 that is left behind on the surface, and the subtleties of the traditional medium. The manifestation of human energy is removed. Consequently, mechanically reproduced icons cease to be an expression of liturgical service since Liturgy presupposes the mysteriological role of matter and the “work of the people,” that is, the cooperation of created, human, and divine energy.

Just as Bezalel was given wisdom to fashion the objects of the tabernacle,50 the icon painter is given skill for the edification of the Body of Christ. In priestly fashion, he takes metals, minerals, and organic matter and, participating in divine energy, changes and offers them back to God (“Thine own of Thine own”),51thereby aiding the faithful to become habitations of the Spirit. The liturgical chanter is not replaced by a recording, because the human voice is God‘s fitting instrument. Likewise, reproductions can never replace the icon painter.

The amorphous printed inks of a reproduction only imitate the hues of the original, giving us only half of its color complexity.52The color’s materiality is absent as it relates to pigment character and paint texture. It sacrifices the tactile for the ocular, which causes it to literally lack depth. The real colors of the hand painted icon encompass both the tactile and the ocular to their maximum effect. In the copy, however, the traces of movement, hesitation,or dexterity of hand,as seen in the marks or erasures left behind, are hardly evident in the perfectly smooth surface. Thick and thin layers are lost. The reproduction renders as indiscernible the original’s highlights that tend to be more pronounced and higher in relief than the first layers of color.The perceived difference vanishes between colors that have been physically mixed on the palette and then laid down compared to those that arise as optical mixtures when a thin translucent layer is laid over another. Reproductions also miss the effect of gold on the background and the assist on garments that reflect light, appearing dark or bright according to angle.The reproduction also barely captures the way pigment particles tend to group together when color is applied by pooling with water, as compared to application by dry–brush. There is no translucency to be seen as a result of light passing through the layers, hitting the white gesso and reflecting back on the eyes. The copy also diminishes the effect when there is the mat or shiny passages on the varnished surface that results from the different properties of the pigments, some of which tend to absorb the varnish more than others. All of these features, among others, that are imbued with the expended labor of the painter disappear in the blink of an eye, leaving no trace of his energy. The more we take the copy for granted, the more we begin to judge the original by its vague semblance. The icon is swallowed up in simulacra and becomes one more exotic consumer image among thousands. Meant to communicate Truth, it is muddled by deceit.53

Let us now try to “read” the copy. Reproductions are drastically impoverished for liturgical use, being impaired in their anagogic function. They introduce falsehood, disregard the symbolic role of matter, and no longer serve as an index of the energy of the painter. As previously mentioned, tradition teaches that only the best materials should be offered as sacrifice for liturgical service since these uniquely serve as mysteriological vehicles of divine energy. In their material make up, reproductions ignore the function of the icon as a vessel or mirror of divinity. They are different “bodies” with quite a different “glory” – compound symbols that communicate a different message. Reproductions speak of the “society of the spectacle” and the “hegemony of appearances,” thereby degrading their iconicity. Instead of serving to reflect the Heavenly Jerusalem, they reflect the encroachment of profane industry onto sacred space. Meant to beautify the temple of God, they often call to mind the bleak, desacralized world of machines. Is not beauty, after all, the splendor of the Truth?

46In other words, the icon ‘imitates’ nature.Coomaraswamy explains this traditional understanding: “Art has also been defined as ‘the imitation of nature in her manner of operation‘: that is to say, an imitation of nature, not as effect,but as cause. Nature is here,of course, ‘Natura naturans, Creatrix, Deus,’ and by no means our own already natured environment. All traditions lay a great stress on the analogy of the human and divine artificers, both alike being ‘makers of art,’ or ‘by a word conceived in intellect.‘…All this is only to say again in other words that ‘similitude is with respect to form.’ ‘Imitation‘ is the embodiment in matter of a preconceived form; and that is precisely what we mean by ‘creation.’The artist is the providence of the work to be done.” A. Coomaraswamy, The Essential Ananda K. Coomaraswamy,World Wisdom, Inc., Bloomington, Indiana, 2004, p.161-62.

47From the introductory prayer to the Holy Spirit in the Orthodox services.

51Thewordsaudibly uttered by the priest in the Divine Liturgy, as part of  the Anaphora prayers, immediately before the consecration of the Gifts.

53As Abbot Suger says,“The dull mind rises to truth through that which is material … .”As quoted in P. Gerson, Abbot Suger and Saint-Denis: A Symposium, The Metropolitan Museum of Art, New York, 1986, p.36.