Like other liturgical arts, the art of liturgical singing, whether solo chant or choral, is dependent to a great extent upon apprenticeship and following traditionally established models. The successful transmission and development of this subtle and ephemeral art depends on the availability of opportunities for aspiring liturgical musicians to encounter examples offered by skilled master teachers, to observe and to learn from them in direct and personal ways.

Such an occasion was offered once again to the attendees of the Vladimir Gorbik Master Class entitled “Interpreting Orthodox Sacred Choral Music,” which took place June 27-29, 2013, at St. Seraphim Orthodox Church in Santa Rosa, California. During the intense two-and-a-half day period of preparation and worship, five student conductors and nineteen singers participated in 2 two-hour conducting seminars and 5 three-hour choir rehearsals, followed by a choral recital. The event culminated with the All-Night Vigil and Divine Liturgy for the feast of the Leave-taking of Pentecost and SS Peter and Paul (NS) on Friday evening and Saturday morning, respectively, alternately sung by the Master Class Chorus, under the direction of Vladimir Gorbik and the student conductors, and the parish choir of St. Seraphim Church, under the direction of Nicholas Custer. Archbishop Benjamin of the OCA Diocese of the West, who presided at the Divine Liturgy, spoke warmly to the Master Class participants, saying that he could not recall the last time he attended a service that was better sung.

What exactly had the Master Class singers experienced in the preceding two days that enabled them to sing the divine services in such an extraordinary way? It was clear to everyone that some type of transformative process had taken place within a very short time, combining motivation, learning, and personal growth on the part of each participant, and bringing about a result that was greater than the sum of its parts. Some of the singers were experienced vocalists with conservatory-level training, while others were rank-and-file church choir singers; some of the repertoire was extremely challenging, such as Rachmaninoff’s Cherubic Hymn and “We Hymn Thee” (from his Liturgy opus 31), while other portions were quite simple, consisting of Kievan Chant litanies and responses; some of the hymn settings—by Nicholas Reeves, Benedict Sheehan, and Nazo Zakkak—were brand new compositions, while other settings were centuries-old znamenny chants. Some student conductors were seasoned professionals, while others were beginners, standing in front of a large choir for the first or second time in their lives.

The unifying factor at the Master Class that harmoniously brought all these elements together was Vladimir Gorbik’s inspired teaching and model of leadership, which instilled in everyone a focused seriousness of purpose, a great reverence for the sacred words well joined to beautiful melody and harmony, and the necessity to dedicate one’s entire self–heart, mind, and body–to the task at hand. Nothing was allowed to be sung in a matter-of-fact, perfunctory, or careless manner, without due attention to ensemble, intonation, and nuance. As one participant noted, it seemed that Maestro Gorbik’s most frequently used word was “More!” More sound!  More nuance!  More strength!  More beauty! More energy! More mystery! At the same time, every external interpretive device or musical technique was related, in vivid and memorable real-life analogies, to a spiritual dimension of the church singer’s and conductor’s ministry.

The Participants Tell the Story

Despite the impressively high levels of both goals and achievements in the Master Class, participants recognized that everything presented can be applied in some fashion to improve the singing of an average parish choir or indeed any choral ensemble. One clergy wife who audited the class took copious notes to share with her small parish choir of six people: “Even with a small choir,” she wrote, “we can work more to sing not just with our voices but with our hearts, remembering that one of our chief tasks is to help people pray. We can improve strength and nuance in our singing, varying tempo and dynamics. We can study the culminations in each phrase.  We can enhance the sense of mystery (to use Vladimir Gorbik’s words, ‘there is no mystery when you are singing “under a metronome”’) and focus on our inner relationship to the music.”

Gorbik incorporated humor, anecdote, imagery, and analogy into his teaching. To the conducting student with fluttering hands, he remarked: “Your hands are like leaves on a tree. They must be like the branches.” To indicate legato, the action of the conductor’s hands should be like “stroking a cat.” The focus of the conducting gesture should be front and center, like “kneading dough,” rather than like “catching stars.” When the chorus was producing a weak sound, he flapped his hands under his chin and made a baah-ing sound like a sheep: “My professor would say, you sound like you are singing under a warm shower. Way too relaxed and comfortable.” He told one conductor to “catch the rhythm in your hand.” As for a conductor’s stance, it should be like when one is “riding a horse”:  you keep your torso and head up, your shoulders down. 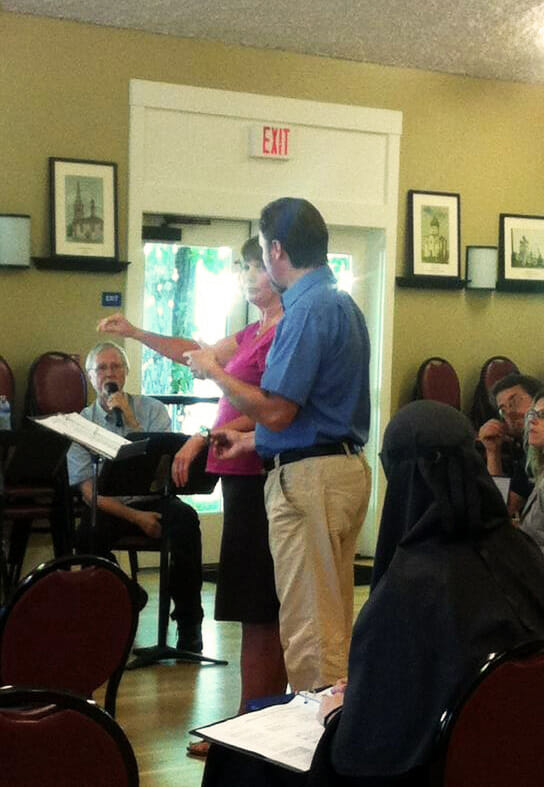 Conductors work in the Master Class.

The feedback from other participants has been equally positive. “This was a spiritually elevating experience,” said another church choir director who sang in the choir. “Vladimir Gorbik so effectively communicated the height, depth and spirituality of our worship through his holistic understanding of mystery and music: where Earth and Heaven meet. I have been changed by Vladimir’s heart he so freely shared… On the Sunday following the Class, my overall conducting had a new life, a fresh spiritual pause and a more solid connection to the text and the liturgical context.”

“The Vladimir Gorbik Master Class was a very insightful and exceptional experience,” said a professional conductor and college faculty member. “I was offered the opportunity to augment my current conducting abilities as well as gain a sincere understanding of how to interpret and conduct the music of the Orthodox Church…. This Master Class was not only a unique musical opportunity; it was also a spiritual journey I will always treasure.”

Some singers in the Master Class who had attended last year returned again. One, a professional with a Master’s degree in vocal pedagogy and choral conducting, said that her primary motivation was to learn more about the interaction of music and theology in the Church. “As a professional musician I have a joyful obligation to use my gifts in service to Christ and His Church. The learning must never stop… It’s also instructive simply to observe Maestro Gorbik and his ability to be simultaneously patient, strict, loving, humble, encouraging and pious…. Just watching him work is a tremendous lesson, and I hope one day to have those qualities in my own heart.”

A non-Orthodox choral musician commented: “I would recommend the workshops to those who have very little experience with Orthodox church music, as well as to those who are active singers and directors in the Orthodox church. I would welcome the opportunity to sing with Vladimir Gorbik on one of his future visits.” 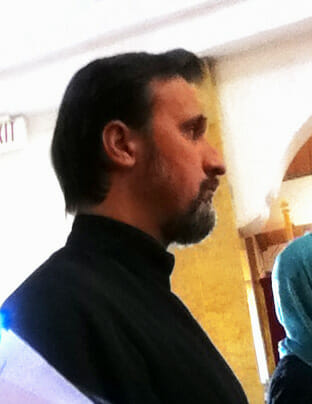 As the head choirmaster (regent) at the Moscow Representation Church (Podvor’ye) of the Holy Trinity-St. Sergius Monastery, Vladimir Gorbik has built up a rich and multi-faceted choral and music-education program, which, in addition to the professional men’s choir, includes a monastic choir, an amateur mixed choir, and a children’s choir, directed by assistant conductors whom he has trained. Since the Fall of 2012, he is also professor of choral conducting at the Moscow Conservatory, his graduate-level alma mater, where he received degrees in choral conducting and orchestral conducting. Having recorded 14 exemplary CDs with the Male Choir of the Moscow Representation Church (available from www.musicarussica.com here), he was given a charge and a blessing from his mentor and spiritual father, Metropolitan Longin of Saratov and Volsk, to share the wealth of his knowledge and experience with Orthodox church musicians in North America.

This is the third choral Master Class that Vladimir Gorbik had taught in the United States; previously he had taught classes at St. Vladimir’s Seminary in June of 2012 and at St. Tikhon’s Seminary in February of 2013. He also gave a lecture and mini-master class at the 22nd annual Russian Orthodox Church Musicians’ Conference in Toronto, Canada in October of 2012. Altogether, over 80 church musicians have participated as conductors, singers, and auditors, representing the OCA, the ROCOR, the Moscow Patriarchate, the Antiochian Archdiocese, the Greek Archdiocese, the Serbian Archdiocese, the Bulgarian Diocese, the Carpatho-Russian Diocese; there have also been participants from the Ukrainian Catholic Church and from non-Orthodox professional choral circles in the U.S. and overseas.

Looking to the Future

The musical traditions and performance practices espoused and taught by Vladimir Gorbik are grounded in the finest and most authentic Russian Orthodox traditions and practices—those of the “New Russian School” nurtured by the Moscow Synodal Choir before the 1917 Revolution and, more recently, those of Archimandrite Matfey (Mormyl’) at the Holy Trinity-St. Sergius Lavra. The experience of the Master Classes has demonstrated that these principles are universally applicable to liturgical singing everywhere and can unquestionably enrich and improve the singing of choirs, both Orthodox and non-Orthodox, in North America. To further this end three high-profile concerts will be given by the Patriarch Tikhon Choir under Vladimir Gorbik’s direction–-September 16 in New York City, September 17 in Pittsburgh, and September 18 in Washington, DC. Additional plans are being made to establish Vladimir Gorbik’s musical and pedagogical activities as a frequent and widely known occurrence in this part of the world.

The success of the Vladimir Gorbik Master Class was facilitated by the outstanding hospitality of Father Lawrence Margitich, Rector of St. Seraphim Church and his dedicated parishioners who provided delicious meals and wine from the heart of California wine country, as well as by Dr. Nicholas Reeves, Professor of Liturgical Music at St. Vladimir’s Orthodox Theological Seminary, who served as coordinator and administrator of the Master Class. To receive notifications of future Master Classes and other events, please send your contact info to vlad@musicarussica.com or nreeves@svots.edu.