October 17, 2017The Task Fears the Maestro; Reflections on a Choral Master Class with Vladimir Gorbik

The following article was written by my wife, Maria Sheehan. 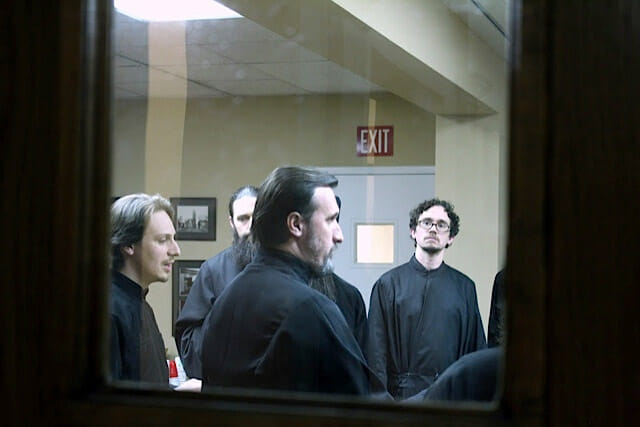 There was great anticipation in the choir from St. Tikhon’s as the day for Maestro Gorbik’s arrival approached. The seminarians were already carrying their normal course load, many caring for their families in addition to maintaining their duties as clergy or altar servers. Yet in addition to all of this they had spent the past two months working very hard to learn the music for the weekend. They needed to know their parts well enough to record themselves singing the entire concert repertoire a cappella, alone. The process of making those recordings was a grueling experience for many of them. It showed them, even before they began singing with the choir, what they were lacking musically.

The excitement, and at the same time, the anxiety, was palpable. Several times I heard seminarians confessing that they didn’t believe they should really be participating. “No one should let me within a mile of this thing,” one said. They felt they simply weren’t good enough. I heard Benedict encourage them. I observed as he spent hours with them, coaching them, correcting them (punishing them!), telling them that they shouldn’t give up. And so they prayed and remained.

While I was only an auditor of this master class, I had a unique perspective. I was able to observe and speak to many of the participants in the weeks and days preceding the event. In addition, many of the singers are dear friends of myself and my husband, whose struggles and joys I share. So I watched with keen interest.

When I had sat in their place several months earlier, as a singer at Maestro Gorbik’s master class at St. Vladimir’s Seminary last June, I and my fellow choir members were not prepared for the level of  professionalism that was demanded of us. But, having been taught humility under Gorbik’s firm and loving hand, by God’s grace we came to understand.  However, these singers were prepared. They had been warned by those of us who had experienced Maestro Gorbik’s direction. They approached with great humility. In fact, they were terrified.  It was to their credit, although there was some initial, shall we say, “pallor” in the ensemble’s sound that had to be worked out!

And so the master class proceeded, and, to an extent beyond anyone’s expectations, succeeded. Each hour showed forth more and more what is truly demanded of a church musician. Each hour dove deeper into a lesson not to be learned in any other classroom of a seminary.

The gift given through this master class was multi-faceted. Newly-elected Metropolitan Tikhon of the OCA, the monastery’s former deputy abbot, the seminary’s former rector, and a seminary alumnus, presided at the services. The beauty of the choir was a fitting expression of the community’s love for him. The celebration of both St. Tikhon’s and St. Vladimir’s Seminaries’ 75th anniversaries, and Holy Trinity Seminary’s 65th anniversary was a blessed occasion. But the joy of seeing the three historically estranged institutions joined together in so profound and so beautiful a way was beyond expression. Maestro Gorbik’s direction provided the blessed fourth party in this reunion. He represented the Trinity St. Sergius Lavra, the spiritual heart of Russia, and the historical “spiritual mother” of the three seminaries.

However, the last blessing, while perhaps the most humble in appearance, was I think the most significant. After the concert, which ended in five standing ovations and four encores, nearly every singer I spoke to had one sentiment to express: they all said, in one way or another, that they had really contributed nothing to the performance. It was all the other singers who had made it beautiful. They had worked to the extremity of their strength, but it was the other singers who were the skilled and talented ones. They found the extent of their endurance. They had truly seen how little they were actually capable of. They listened more than they sang and let the others’ voices shine more than their own. What’s remarkable is that I heard this from singers who were standing directly next to each other. They were speaking about one another. I told this to Maestro Gorbik. He was silent for a moment and then thoughtfully crossed himself and said, “It’s a miracle!”

Our Lord has ordained that we employ the art of music in His House, as fitting worship of His glory. However, in the world, this art is too often inseparably wedded to ego. In fact, in order to be a convincing performer of secular music one must actually project a certain amount of ego. It is a performance technique, as essential to good singing as intonation — and sometimes more so. This must not be so in the Church. Maestro Gorbik, in harmony with the Holy Fathers, teaches that ego in a church choir impedes the ascent of the whole choir, even the whole of the faithful gathered in service, into the heights of heaven.

However, we often naively fall into the misconception that the opposite of ego is weakness and mediocrity. We think that it sounds pious to sing weakly and poorly. Singing we’d never want to display for a local radio station producer is sufficient to present before the Source of our life, simply because it sounds “humble.”

And afterwards they were all humbled, grateful and exhausted. They prayed and our Lord responded, “My grace is sufficient for thee, for my strength is made perfect in weakness.”

God willing, most of these men will be priests. Throughout their lives — the lives that they have given to the service of Our Lord at His Holy Table — whether they ever sing together again or not, I expect these men will recall this master class as one of the most powerful lessons in their priestly formation. Glory to God for His mercy and bounty!