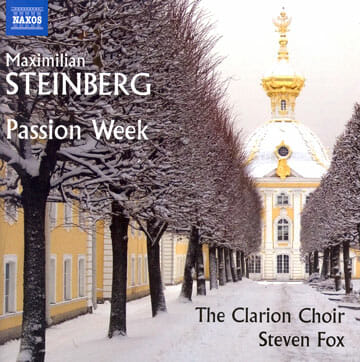 Last year, readers of the Orthodox Arts Journal read about the significance of Passion Week  by Maximilian Steinberg (1883–1946), a newly rediscovered choral masterpiece based almost entirely upon early Russian chant melodies. Completed in 1923 in St. Petersburg, just a few weeks before the communist authorities banned all composition and performance of sacred music, the work lay in obscurity for 90 years, until it was revived and given its world premiere in April 2014 by Cappella Romana, under the direction of Alexander Lingas. Cappella Romana also recorded the work, which was given an extensive and informative review in the Orthodox Arts Journal by Benedict Sheehan.

As Sheehan noted, a work of the caliber and quality of Steinberg’s Passion Week could not fail to attract the attention of top-level performing ensembles. Already at the time of Cappella Romana’s April, 2014 premiere in the Pacific Northwest, the New York-based Clarion Choir, one of that city’s finest professional choral groups, under the direction of Steven Fox, expressed an interest in the work. In October of 2014, Clarion gave the East-Coast premiere of Passion Week. Writing for the New York Times, reviewer James Oestreich termed the work “a treasure . . . [whose] moment has arrived.” A true statement indeed—except for the fact that the work has still never been performed in Russia, the land of its origin.

Now the Clarion Choir has taken the next steps that will extend the world-wide visibility of Steinberg’s Passion Week — by releasing another fine recording of the work on the Naxos label and by undertaking an historic tour to Russia, where they will give the Russian premieres in St. Petersburg and Moscow, followed by another concert in London.

The St. Petersburg premiere will take place on October 25 at the splendid Grand Philharmonic Hall, while the Moscow performances will take place on October 26, at the Roman Catholic Cathedral of the Immaculate Conception, a well known concert venue for sacred music, and October 28, at the Rachmaninoff Hall of the Moscow Conservatory, where the famous Moscow Synodal Choir once sang. The Clarion Choir will also perform an invitational concert at Spaso House, the residence of the US Ambassador to the Russian Federation, as part of a newly formed collaboration with The PaTRAM Choir—the Choir of the Patriarch Tikhon Russian-American Music Institute, under the direction of Vladimir Gorbik.

The Clarion Choir’s recording of Steinberg’s Passion Week offers a somewhat freer, more flamboyant reading of the work than Cappella Romana’s finely chiseled and finessed presentation. Both recordings satisfy and do justice to Steinberg’s complex and colorful score, which is remarkable in the way it expresses and interprets the meaning of the sacred texts of Orthodox Holy Week, using the austere melodies of znamenny and Kievan chants as their basic thematic material. The Clarion recording lets the listener actually hear five of those chants in their unadorned, unison form, interspersed among the eleven movements of Steinberg’s work. This provides both a respite from the dense sonorities of the polyphonic score, and also heightens one’s appreciation of the composer’s mastery and craftsmanship. 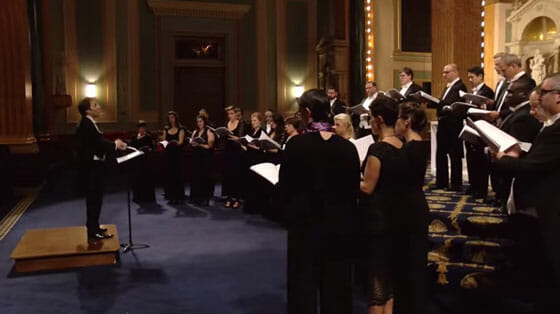 Like Cappella Romana, the Clarion Choir will be performing Steinberg’s Passion Week from a new score prepared and published by Musica Russica of San Diego, California, a company that has specialized in the publication of Russian and Orthodox choral works over the past 30 years. The President of Musica Russica, Dr. Vladimir Morosan, will be traveling with the Clarion Choir to Russia to present pre-concert lectures, further acquainting Russian concertgoers with the fascinating musical treasure that has been lost for over 90 years.