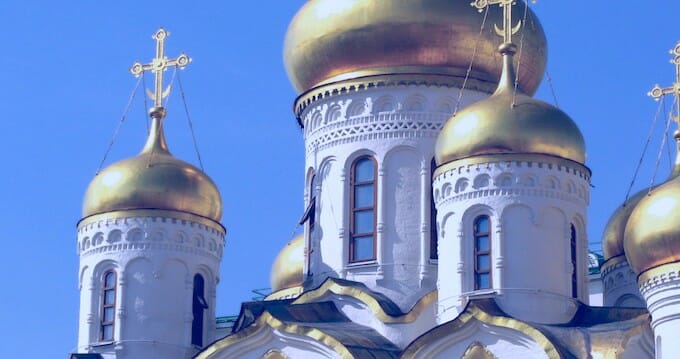 (the Wall Street Journal also reviewed this performance:’Passion’ and Resurrection)

During  Capella Romana’s recent performance of Soviet composer Maximilian Steinberg’s lost work, something became evident to the singers and the audience: while Steinberg’s Passion week is a very complex and lovely piece of choral music, it is a profound confession of faith.

Vladimir Morosan gave some contextual remarks prior to each performance. Morosan produced a new, cleaned up edition of the score with Church Slavonic for the singers to use. This work gave him a rich familiarity with the music so his remarks, which were primarily for the non-orthodox, non musician were very useful in locating the piece for listeners. (Cappella Romana is producing a CD in the summer and with it’s release, we will attach Morosan’s remarks in the OAJ announcement.)

Steinberg was a Lithuanian Jew who converted to Orthodoxy, presumably to marry Rimsky-Korsakov’s daughter. Steinberg studied with Rimsky-Korsakov, was a classmate and close friend of Stravinsky and taught Shostakovich. While many of his associates either emigrated or were sent to the Gulag, including his friend who translated the Passion Week piece into Latin, it is remarkable that Steinberg remained in the Soviet Union and died of natural causes in 1946.

Steinberg intended this piece for a broader audience than the church. While other Orthodox liturgical composers, such as Gretchaninoff or Rachmaninoff , composed new music, Steinberg based his work on traditional Russian chant. In a sense, Steinberg’s choice indicates that this piece was a confession of faith, given that it was composed during a time of intense political unrest with Lenin’s decline, the maneuverings and of Stalin and his purgings, a crack down on the church and a severe famine killing at least 2 million souls.

The music itself is a challenge for singers involving complex harmonies, beautiful dissonance which flirts lightly and then resolves, producing a vivid, energetic yet melodious sound. It should be noted that all of Steinberg’s Passion week pieces could be used liturgically, but would require a strong church choir.

For the premier concert in Portland OR, Cappella Romana’s home turf, Alexander Lingas, the director, had the choir sing “Memory Eternal” for both Maximilian Steinberg and for Igor Buketoff, the man who passed this work onto Father Daniel and Mat. Tamara Skvir, urging them to get it performed. Lingas also had the choir sing “Many Years” in honor of Fatherr. Daniel and Mat. Tamara. In my row, many tissues were needed during these two pieces.

Afterwards, Mark Powell, the business director and Cappella Romana member commented on singing a work that was lost in the bowels of the Soviet repression. Powell realized that the piece is a gift that reached across decades, it’s performance a type of resurrection so to speak, a sealing testimony of one man’s faith, who knew that his work would never be performed in his lifetime. Christ is Risen!