October 28, 2015Two images of the Church and why they should not be confused.

St-Peter on The Right. St-Paul on the Left. 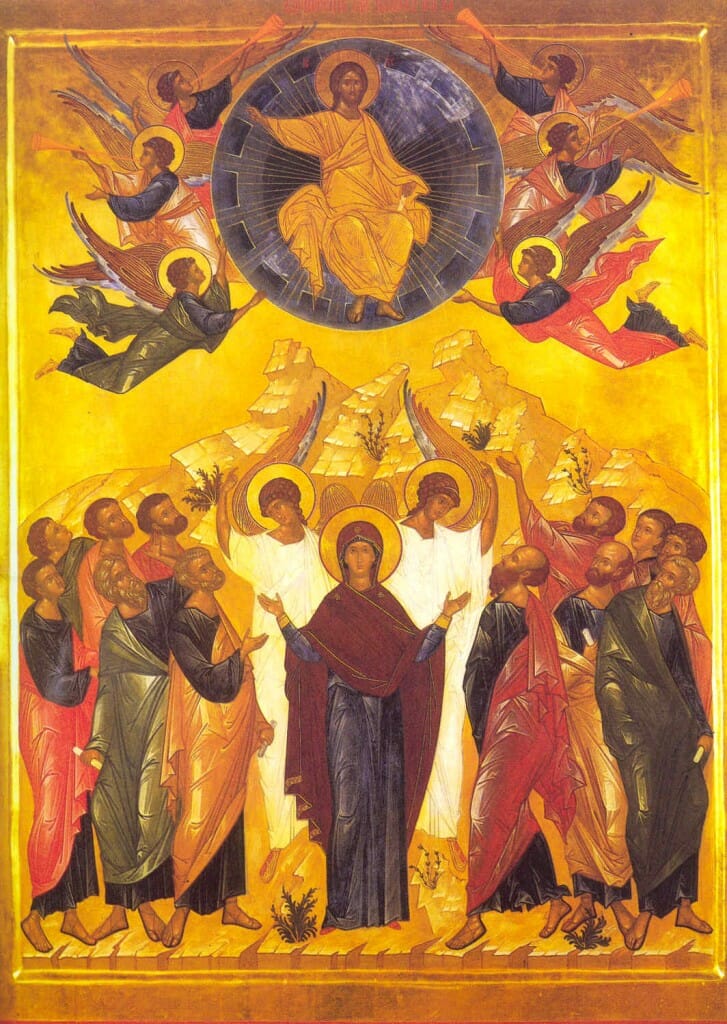 15th century icon of the ascension from Russia

The iconography of St-Peter and St-Paul is one of the most stable and most ancient in Christian art. Even before the image of Christ became fixed, one could recognize Peter and Paul:  St-Peter having short white hair with a round curly beard whilst St-Paul is a balding man with a dark pointy beard.   The motif of St-Peter and St-Paul flanking the right and left of a scene is so pervasive that often St-Paul will appear in his usual place even in scenes where he was not physically there. This is true of the Ascension and Pentecost. 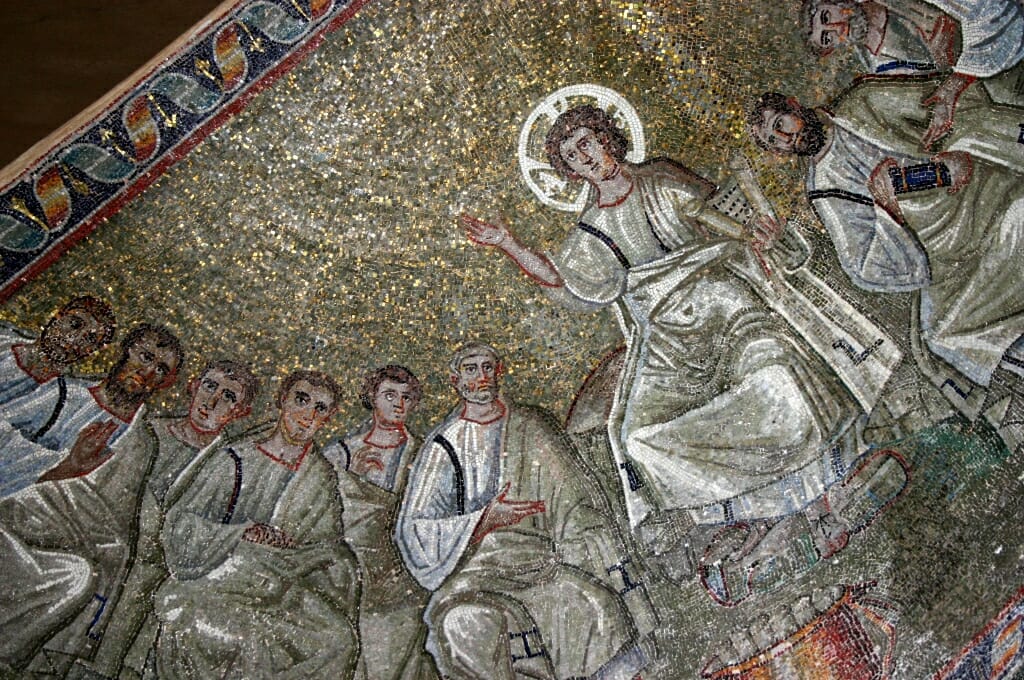 4th century mosaic of the Tradition Legis from Milan

Yet before we dive in too deeply,  we need to mention one thing regarding symbolism of the left and right hand.  Because the right and left depend on the point of view, where my right meets your left when we face each other, confusion can quickly set  in.

We should not be surprised of exceptions or inversions in some icons as these are not at all rare[1]. What is important is that these two sides represent the same thing even when they are inverted through an interpretation of the point of view.   As Christian imagery stabilized and in most iconography since then, what is the “right” is taken from the point of view of Christ in the image, appearing therefore on the viewer’s left.  This remains true even when Christ is not there. For example in the icons of Pentecost, both saints will retain their traditional sides despite that Christ is not visibly there to anchor their position.  I contend that almost unanimously through all of iconography, Peter and Paul are identified with what we could call the “symbolic” right and left side respectively. 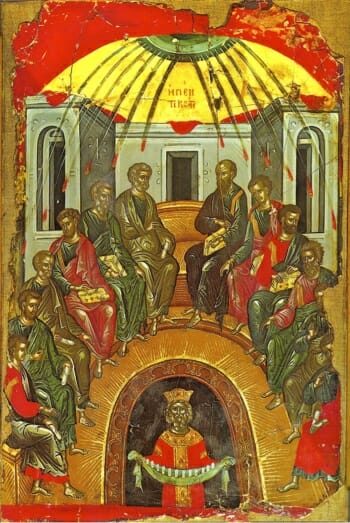 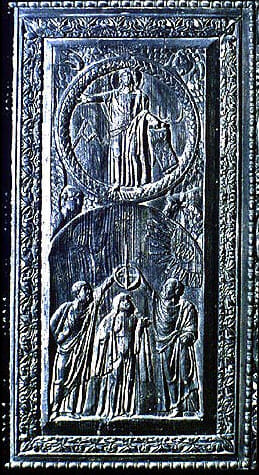 Triumph of Christ and his church, a proto-ascension from Santa-Sabina in Rome. 5th century

Very early, from the time of St-Clement of Rome, St-Peter and St-Paul have been hailed as the two Pillars of the Church.  On a 5th century image from  Saint-Sabina in Rome there appears a proto-ascension, with Christ in glory at the top and with Sts Peter and Paul grasping a chrism over the head of a figure that is most probably Ecclesia, a symbolic figure standing for the church (This figure will later be joined to the symbolism of the Holy Virgin.)  It is in this respect, as the two pillars of the church, that they appear in so many images culminating in the icon of the saints holding a church together as a symbol of their role, incarnating in a way the two basic principles of the constitution of the Church.

To understand what I mean by this last statement, we need to review  the basis of left/right symbolism in the New Testament, the passage in which Christ separates the sheep and goats (which we have looked at in our post on Mercy and Rigor).  In the Gospel passage, we find not only a separation into opposing sides, but to the sheep on his right Christ  says “come” and to the goats on his left he say “depart”.   The movement is not only a separation, but a movement towards and away from Christ.  This aspect of the symbolism of left and right is supported by early rabbinical traditions in which God is said to “bring closer with the right and push away with the left”.

We need to view this movement of coming closer and moving away in the spirit of Tradition and with the mind of the Fathers.  In the tradition of the Philokalia, the “moving in”  of the nous is a concentration, a movement towards unity and the solidity of the heart, whereas the “moving away” is a dissipation, a movement towards multiplicity , the senses and corporality.  Relating to this, there is an ancient tradition coming from Evagrios that the right eye is meant for contemplating God whilst the left eye is meant for contemplating created things[2].   Consequently,  the first reason for the left /right position of the saints is the same as what we have described in an earlier article about the symbolism of the ox and ass in the Nativity icon representing Jews and gentiles. Here we have st.Peter, the apostle to the Jews, and st. Paul the apostle to the gentiles.  Peter is associated with a “gathering in” or “founding” whilst Paul is associated with a “spreading out”.

St-Peter and St-Paul as pillars of the Church. 16th century icon from the Cretan school

To help us understand, we can look at an Old testament type prefiguring the Apostles in their role as “pillars”.  In the Temple of Solomon there were two prominent bronze pillars.   These pillars are given names in Scripture. The first pillar is Jachin, which means “the Lord will establish” .  This notion of establishing can be linked to our Lord telling Peter: “You are Peter and on this stone I will build my church.”   The second pillar is called Boaz, and here we have an even more surprising relationship, because although the word Boaz has an obscure etymology, it refers to the ancestor of David known mostly for marrying Ruth, a gentile woman who converted. Boaz therefore strongly prefigures Paul as the “apostle to the gentiles”.  Most importantly, just as with Peter and Paul, we can see in the two pillars of the first Temple this primordial movement towards and away from the center,  analogous to the movement of the nous.

As always these relationships we are exploring are deeply noetic and it is difficult to fully analyze them as they must be grasped in an intuitive manner.  In the modern world, our capacity to experience this connectivity of meaning is greatly diminished.  But there remains traces of these ancient meanings still today, for even in our modern languages “right” also means “correct” or “good”. In French “droit” has the meaning of “straight” just as in the greek “ortho”.  In several languages, “left” has a meaning of awkwardness, crookedness, the root of the English word “left” means “weak, foolish”.  In latin, even the darker aspects of the left hand appears as it is called “sinistre”.  This symbolism is closely attached to our everyday experience as most of us have one hand that is dexterous and one hand that is awkward, one hand that is strong and another that is weak.

Yet having said all I have said, one must be careful not to simply think that right=good and left=bad.  In fact St-Maximos tells us “The passions of the flesh may be described as belonging to the left hand, self-conceit as belonging to the right hand”.  Here we can see the same symbolism continuing, with self-conceit being a sin of solidity while the passions of the flesh bringing about sins of dissipation.  St-Maximos also tells us that “

We can see this movement of the “vices of the right” in the very person of St-Peter, for his sin was not firstly to have denied Christ, but to have announced that he would never deny him.  And having declared his infallibility, Peter quickly flips over to the “left side” and is in fact the only apostle to ever deny Christ!

If we can see the “negative side” of the right in Peter, we can also perceive the “positive” side of the left in the person Paul.  St-Paul is a perfect picture of the “left hand”.  Firstly, he is in a way “added” to the 12 apostles, his legitimacy must be questioned before he becomes the 13th apostle.  He calls himself the “least” of the apostle.  He boasts of his weakness, he calls himself a fool, he tells us that he is a “shape shifter” being all things to all men.  He is a Roman citizen, something we often take for granted, but which places him on the cusp of being a gentile himself.   Yet in St-Paul we can see how all these left hand attributes contribute to the life in Christ. 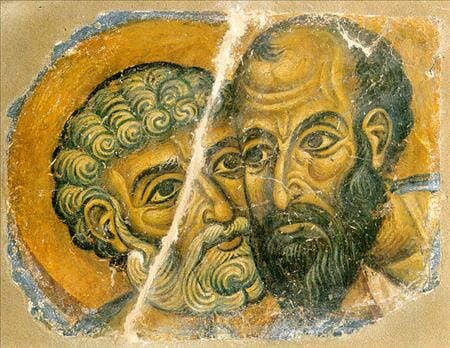 12th century icon of the embrace of St-Peter and St-Paul. According to tradition, the two saints embraced before being executed.

In the end, what is important is how the left and the right are connected to the heart, how in truth, the Church is neither of Paul nor of Peter but of Christ.  When contemplating the icon of the embrace of the apostles, we should tremble at the possibility of them having gone their separate ways.  We should tremble at the very fantasy of St-Paul creating a fragmented, illegitimate, informal, proselytizing church opposing an overly centralized, presumptuous, formalistic church in this imagined wake of St-Peter.  Rather, as they have embraced, as they continue to embrace in the very bosom of Christ, we find two immovable guides, a pillar of cloud and a pillar of fire, one pointing to the gathering, the communion of faithful, the joining of the body, the stable and solid hierarchy of the church;  and one pointing to Christ’s great commission, the announcing of the Word,  the martyrs, the ascetics and those fools of God that sacrifice all for Christ. 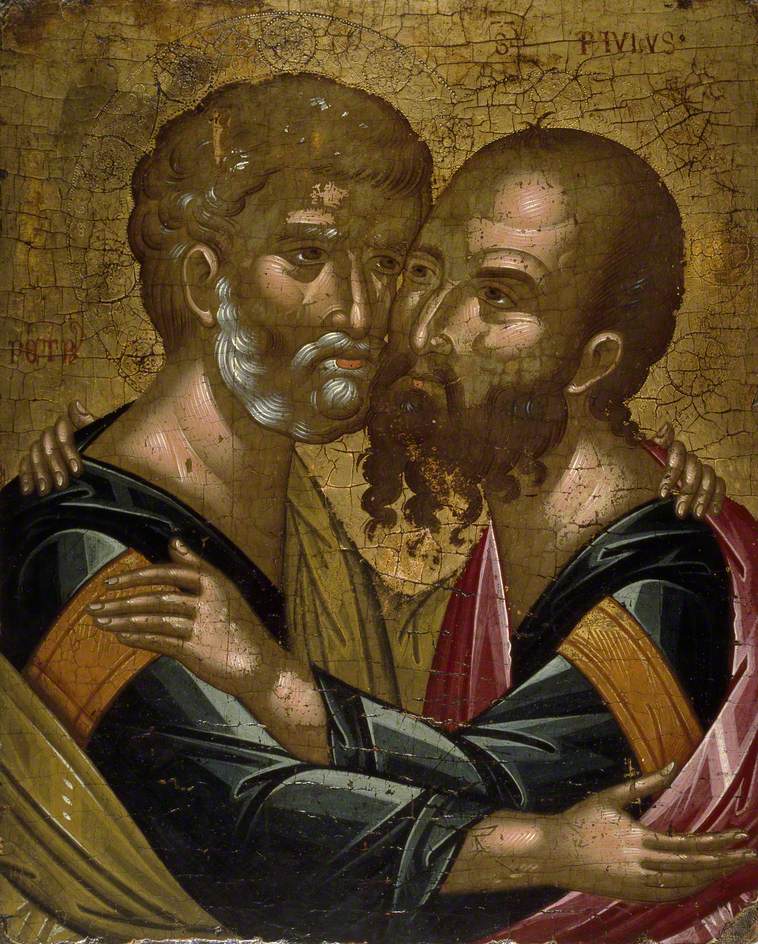 The embrace of St-Peter and St-Paul. Cretan school.

[1] Gregory Melnïck in his translation of the a Russian icon pattern book, the « Bolshakov manual » mentions this confusion regarding the Russian cross with three horizontal bars : « From time to time one sees « three-barred » crosses appear to be « reversed », that is, the bottom bar ascends from left to right. …The Slavonic text is misleading because it assumes the reader understands that « left » and « right » are actually from Christ the Savior’s perspective and not the viewer’s. » p.30