Letter To an Iconographer on The Ancient of Days

Sometime ago, a friend sent me an image of the Ancient of Days that is being painted in a Greek Orthodox parish in Montréal, Québec, Canada. He wanted to know what I thought of it. The first image was not yet finished and the seond one is finished. I wrote him back the following comments. 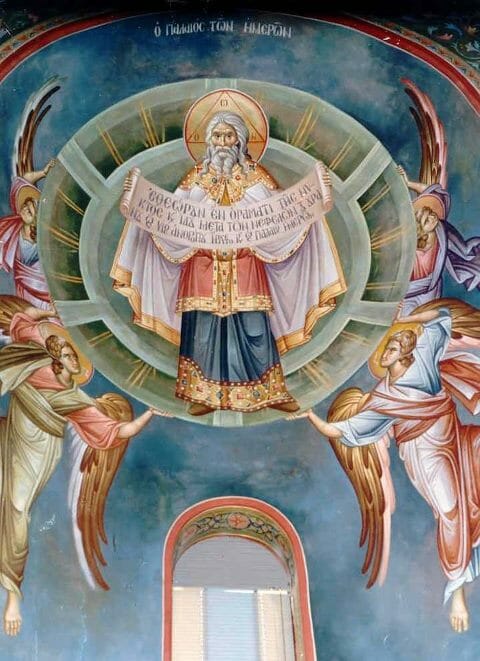 First version of the Ancient of Days 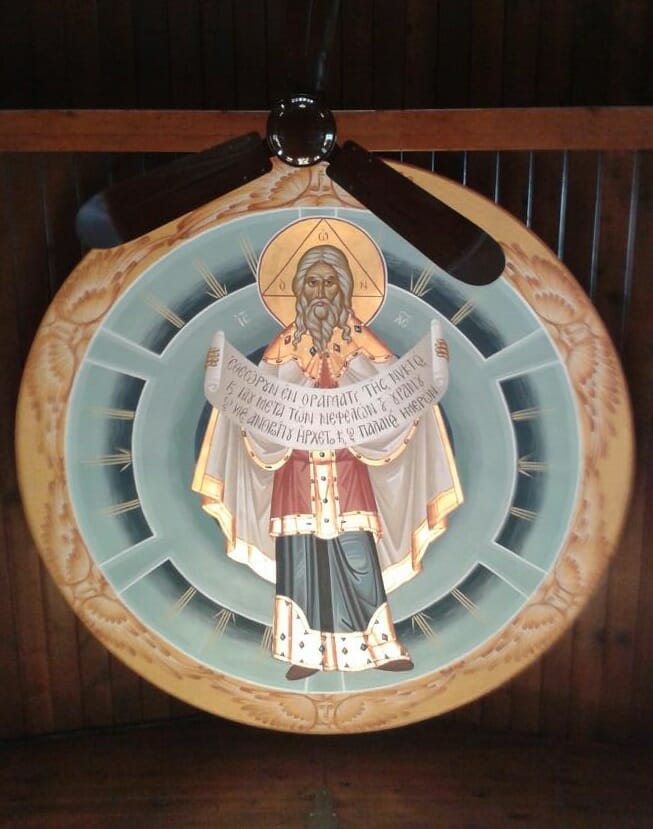 Second version of the Ancient of Days

The essential questions in this passage and for the image of the Ancient of Days are these: Who is the Ancient of Days? And who is the Son of Man who comes close to him to receive a kingdom? This passage from Daniel has historically been used to theologically justify images of God the Father, alone or in various forms of what is called the New Testament Trinity as opposed to the Old Testament Trinity that is the Hospitality of Abraham. The so-called New Testament Trinity has various forms but always shows an old man with a white beard, an adult man or a boy, and a dove. According to this interpretation, the old man, the Ancient of Days, is the Father; the man, the Son; and the dove, the Holy Spirit. These images and their theological justification have become so common in the Orthodox world that nobody, almost nobody, questions them. But I, being impertinent, rebellious, and–imagine Orthodox, I hope–wish to rise up and challenge both the image and the theological explanation as being contrary to the Holy Tradition.

We know from historical and iconological studies that both the image of the Ancient of Days as God the Father, alone or in the so-called New Testament Trinity, and its theological justification based on Daniel do not come from the Orthodox Church’s tradition. It is only around the late Middle Ages that the image and its justification make their appearance in the Orthodox world, and the source is the Latin Catholic West. For several centuries, western painters had been painting various forms of the Trinity, which were eventually justified by an appeal to Daniel and his vision of the Ancient of Days. During the period of what is called the Western Captivity, when Orthodox all over the world swallowed nearly everything that came from the Latin West as “better” than the “old-fashioned” Orthodox images and theology, this image and its justification made great inroads into the Orthodox consciousness. And this to such an extent, that people forgot the real and genuine Holy Tradition of the Fathers. And what is that Tradition?

Briefly, it is that the Logos of God the Father, the Son, who became incarnate in the historical Jesus of Nazareth, is the one, the Person, who reveals himself, imperfectly, vaguely, as through a mirror, just a little bit, in the Old Testament. Who spoke to Moses on Mount Sinai? Who spoke to him in the burning bush? Who is the creator that Genesis talks about? With whom did Adam and Eve walk and talk in the Garden of Eden? Whom did the prophets see and hear in their visions? The unanimous Holy Tradition of the Orthodox Church says that it was the Divine Logos, the Son, the second Person of the Trinity, not the Father. The Son reveals the Father and the Spirit both in the Old Testament, “darkly” and openly in the New Testament. “And he taught us how the Law and the Prophets spoke about him.” So the question is this: Whom did the prophets, and particularly Daniel, see in their visions? The general answer from the Fathers is that they heard and saw the Son and not the Father. Therefore, this general principal of interpretation–the Son reveals himself darkly in the Old Testament–should be enough to answer the question as to the identity of the Ancient of Days.

But then, those who want to justify the images of God the Father say,

But look at the passage of Daniel 7: 9-22, and you’ll see that the Ancient of Days, despite the general principle of interpretation mentioned above, is not the Son, the Logos, but the Father, and therefore since the Father made himself visible, we can paint his image.

I must admit that that sounds pretty convincing, doesn’t it? It is so convincing that for several centuries Orthodox people simply accepted it without question. But let’s take a look first of all at Daniel 7: 9-22. What is the scene? What is Daniel talking about? What is his dream a vision of? It is quite clear from reading carefully the passage that we have a vision of the final judgment, when all the bad guys, the beasts, will be destroyed and the saints of God will be established in peace. Verse 9: 7 starts out “The thrones were set up and the Ancient of Days sat down.” Where and in which capacity? As judge at the final judgment: “until the Ancient of Days comes and the judgment is given in favor of the saints of the Most High.” Now from the Orthodox point of view–I would even say from the general Christian point of view–who is the Judge who will judge all people at the Last Judgment? There is no question that it is Christ, the Son, the Logos of God, the second Person of the Holy Trinity. “The Father has given all judgment to the Son…” So right from the beginning, even before the Son of Man appears, we have to identify the eschatological Judge sitting on his throne of judgment as the Son.

But then what do we do with the Son of Man who approaches the Ancient of Days to receive the eternal Kingdom? Isn’t it obvious that he is a different person from the Ancient of Days? Well, is it so obvious? Let’s not forget that we are dealing with a vision and a dream, so we are already in a realm where the logic of our waking world doesn’t really apply. Second of all, we’re dealing with a dream about an event that has not yet happened and one that will take place after the general resurrection, events that we can even now only talk about in symbolic, poetic language, a language that doesn’t obey the logical laws that govern our life here and now. So it is not obvious that we are dealing with two distinct persons here, one the Father and the other the Son. It is completely possible, according to the logic of dreams and eschatological visions, that two figures can represent the same Person, in different aspects of his being, or even that one figure can represent two or more persons, again following the logic of symbols and dreams. I would say that from the very beginning of the passage in Daniel, the Ancient of Days is the eschatological judge–and from the Orthodox perspective, that must be Christ–and the Son of Man can also be seen as the Son, Christ. We have here then two figures who represent two aspects of the same person. The Ancient of Days on his throne of glory, judging the beasts, and the Son of Man in his humility as incarnate who receives the eternal Kingdom. “But Father,” you may say, “the Ancient of Days then is giving the eternal kingdom to himself.” Well, that is alright. The language and the imagery are simply those which the prophet chose to express his vision. We know that there are two aspects to the Incarnation: the Lord of glory and the humble servant. Putting ourselves into the mind set of dreams and visions, we should not be surprised that two figures symbolically represent two aspects of the same reality, the same Person.

So then, it is not necessary to interpret Daniel’s vision as two distinct Persons: the Father and the Son. It is completely consistent with our theological principles and dream language, to see that two aspects of the same person are “dramatically” represented. This interpretation also avoids a gross violation of the accepted rule that the Son reveals himself in the Old Testament. There is no other passage in the Old Testament in which it is said, by the Orthodox, that the Father became visible. And we know also that no other Biblical passage is sited by those who want to see the Ancient of Days as the Father to justify direct images of the Trinity.

So then are all images of the Ancient of Days to be banned as contrary to Holy Tradition? No, indeed, but they must be clearly identified as the Son so that the principle is preserved that it is the Son who reveals himself in the Old Testament. There are many examples of this kind of image in the Orthodox Tradition: an old man with a white beard with a halo around his head with a cross in the halo and the Greek words, HO ON, meaning the existing one, Yahweh. This is what the speaker said to Moses when Moses asked what his name was: Yahweh in Hebrew and Ho On in Greek. “I am the existing One” or something like that. Why is Ho On in the halo of nearly all icons of Christ? Those words tell us that the Church says that this man, Christ, is also the One who spoke to Moses and the other prophets including Daniel. Now when we look at the image that has been/will be painted in the Montreal parish, we see that indeed there is a halo with Ho On in it but there is no cross, which is another way for the Church to say that this man, Jesus, really died on a cross. So there is one good point, Ho On, and one bad point, no cross, for this particular image. Another thing, the triangle in the halo. That sign is not rooted in Holy Tradition but is a masonic symbol that was also imported into the Orthodox tradition, but has no place. Sometimes you also see “the all seeing eye” as on American dollar bills, but that has no place in Orthodox iconography. Another point against this image. So the word I would use to characterize this image is ambiguous and as such it should be redone so as to clearly show the Church’s teaching about who the Ancient of Days is. If the triangle were removed and a cross put in its place and maybe even IC XC put by his head, that would remove all ambiguity and would be very good. As is, however, I would not accept it as being faithful to Holy Tradition.

Well, Angelo, I’ll bet you didn’t expect to get such a long answer to your question, but you have to realize that our iconography is not just pretty pictures on the wall, like a museum, but icons, canonical icons, express in lines and colors, the Church’s teaching. We must therefore be vigilant so as not to support “heretical” or ambiguous icons that will only confuse people instead of teaching them properly. Now I’m now going to read the paper. Have a nice day.

PS. Since I received the first image of the Ancient of Days and wrote the above, I received the second image which has IC XC. That is a significant addition and eliminates the ambiguity as to the identity of the figure. It is therefore now acceptable, even though I still don’t like the triangle, but I can live with that.