January 19, 2016A Carved and Inlaid Cross, a Collaborative Work

May 24, 2013Learning Icon Carving with Hexaemeron 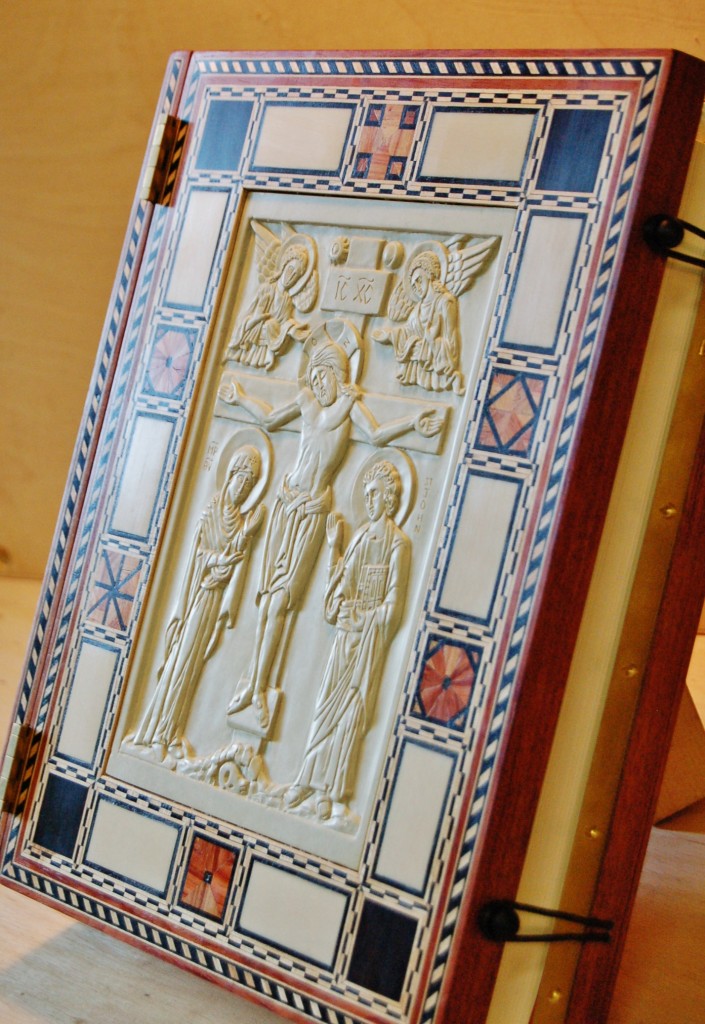 The idea for this gospel cover began several years ago. I discussed with Jonathan Pageau the possibility of  using his stone carvings as inlaid icons in wooden liturgical pieces. He is able to carve the steatite stone slabs quite thin so that the weight is reasonable even for a book cover.

I based the proportions of the cover upon surviving medieval ‘treasure bindings’ which frequently incorporate a Byzantine ivory carving framed in gold and gemstones. But I decided to ornament the woodwork with inlay using various precious woods and ivory (salvaged from a water-damaged organ keyboard).

Inlay and marquetry with fine woods and other materials is a matter of particular interest to me in liturgical art. It was a prevalent style of liturgical ornament in 17th-century Greece and other Mediterranean countries. Many of the finest furnishings to survive at Mt. Athos and other venerable churches are completely covered in fine inlay work. Inlaid ornament is also prevalent in Coptic churches in Egypt, and has been for over a thousand years. The ancient churches of Egypt have both doors and iconostases beautifully ornamented in ivory or mother pearl. Since inlay is also traditional on fine American furniture and musical instruments, this style of woodwork strikes me as a satisfying confluence of Orthodox and American heritage.

The gospel cover makes extensive use of inlay banding – strips of veneer sliced from an assemblage of woods to make a repeating pattern. This material has been used for centuries in American furniture and is still manufactured in many small workshops nationwide. I combined the inlay banding with veneers of ebony, ivory, and burled myrtle inlaid into a structure made from bubinga (African rosewood). The black and white patterns of banding arranged in bold geometries make a remarkably energetic composition. But because the woodwork is flat, it does not overwhelm or distract from the icons. The carvings and the inlay seem to occupy different visual worlds, and they perfectly complement one another without competing. Interestingly, the lighting conditions at any given moment always emphasize either one or the other. The woodwork looks best when lit face-on, which leaves the carving washed-out. Raking light flatters the carving, but makes the inlay less noticeable. Thus as one holds and turns the book, the inlay and carving continuously switch prominence – an effect which truly brings the work to life! 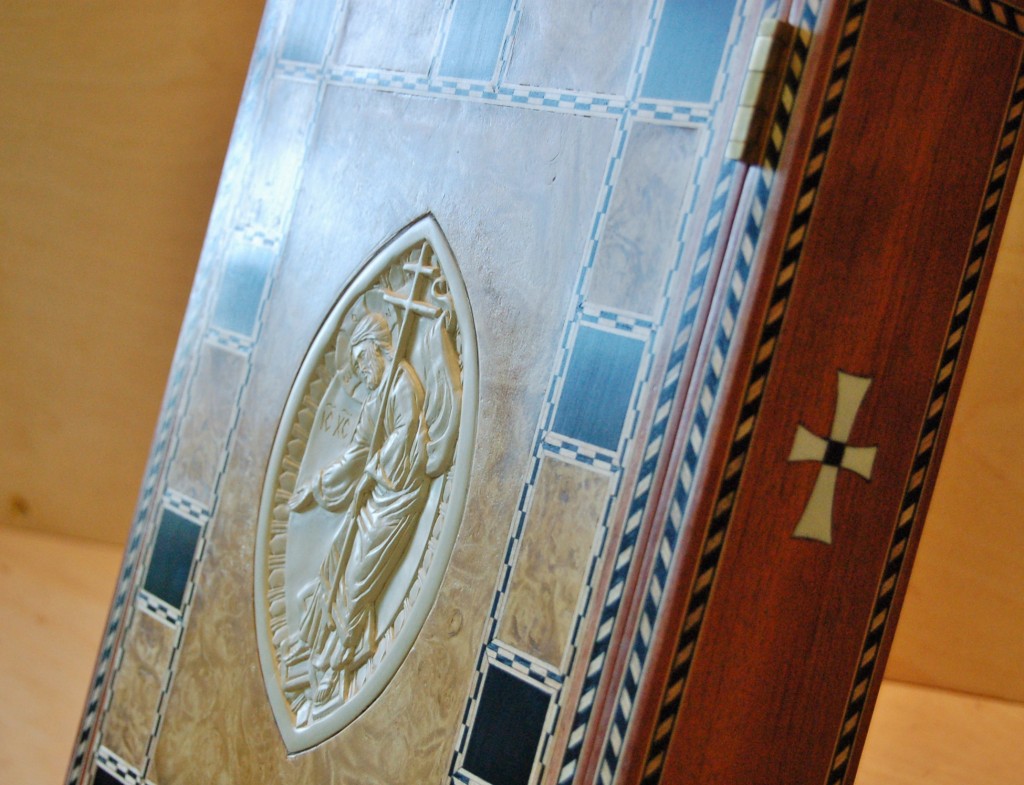 The greatest challenge was installing the book so that covers could move independently – a necessity so that the rigid wood covers do not tear apart the book spine upon being opened. So the book floats in brass channels that allow it to slide easily as the covers are opened. This works quite well, but it is a complicated solution. I have recently become acquainted with a specialist in medieval book binding who has shown me exactly how the ancient covers were made. For my next gospel, I plan to have him unbind the volume and sew it directly into wood covers in the traditional manner. Also, I would like to try doing the icons in carved boxwood or silver repoussé so that the covers may be somewhat thinner and lighter allowing for a simpler and less costly design. 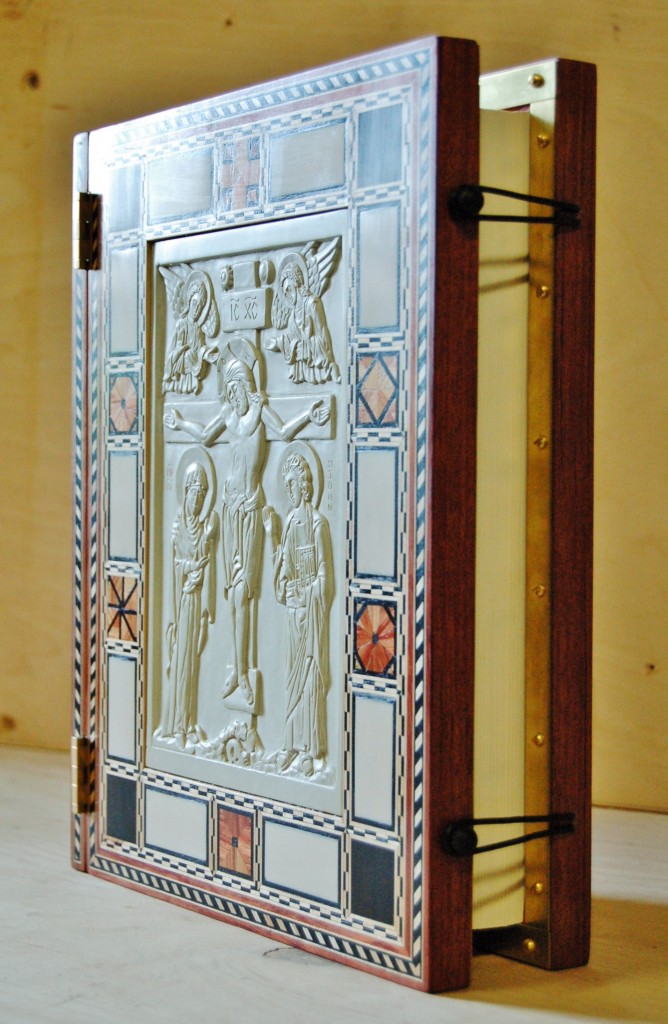 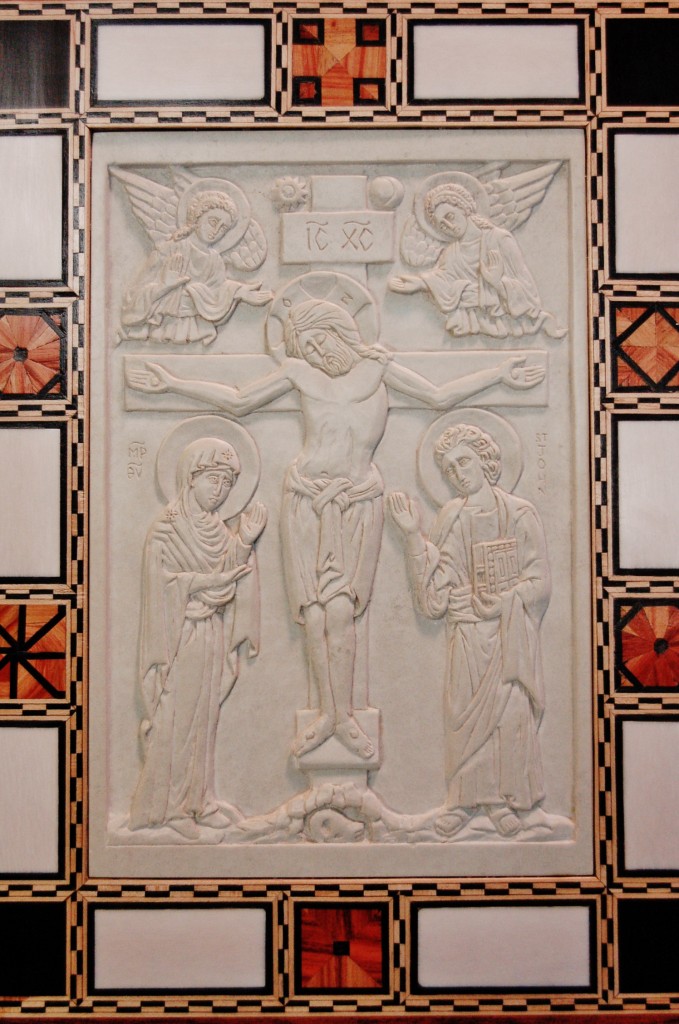 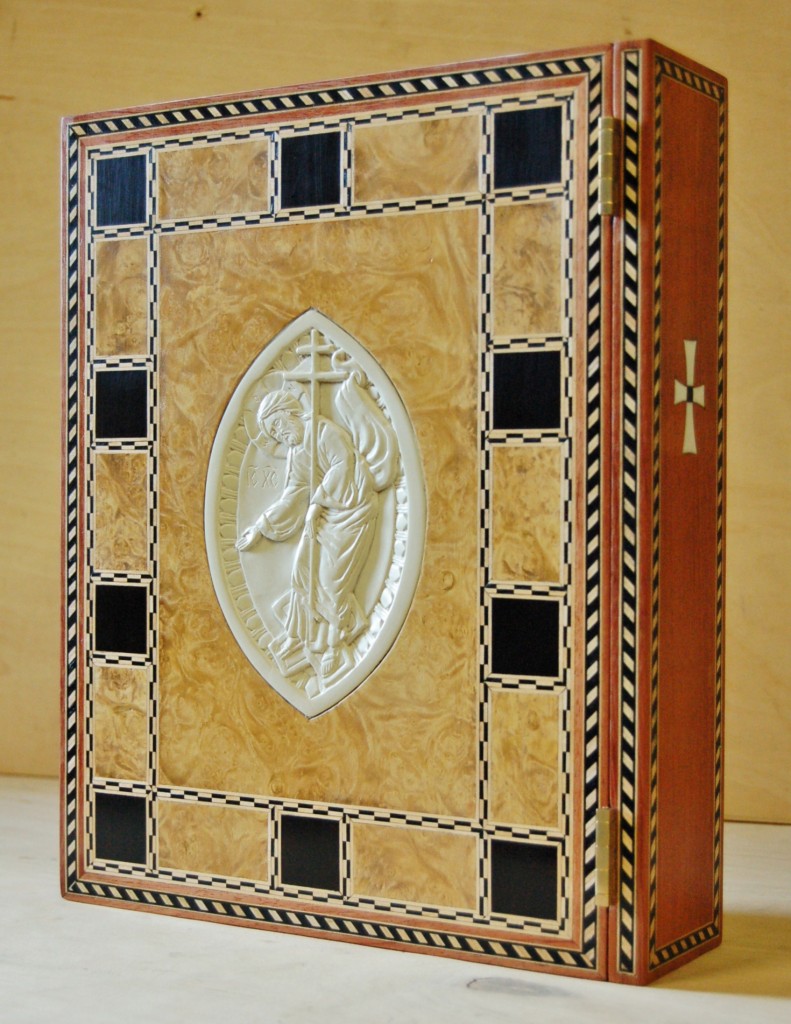 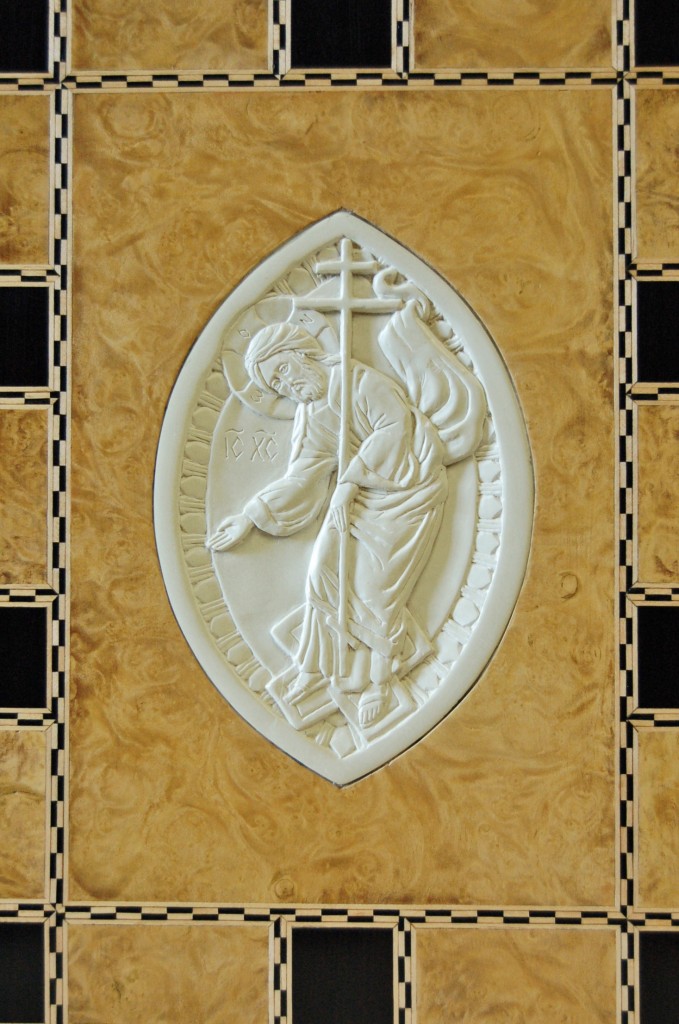 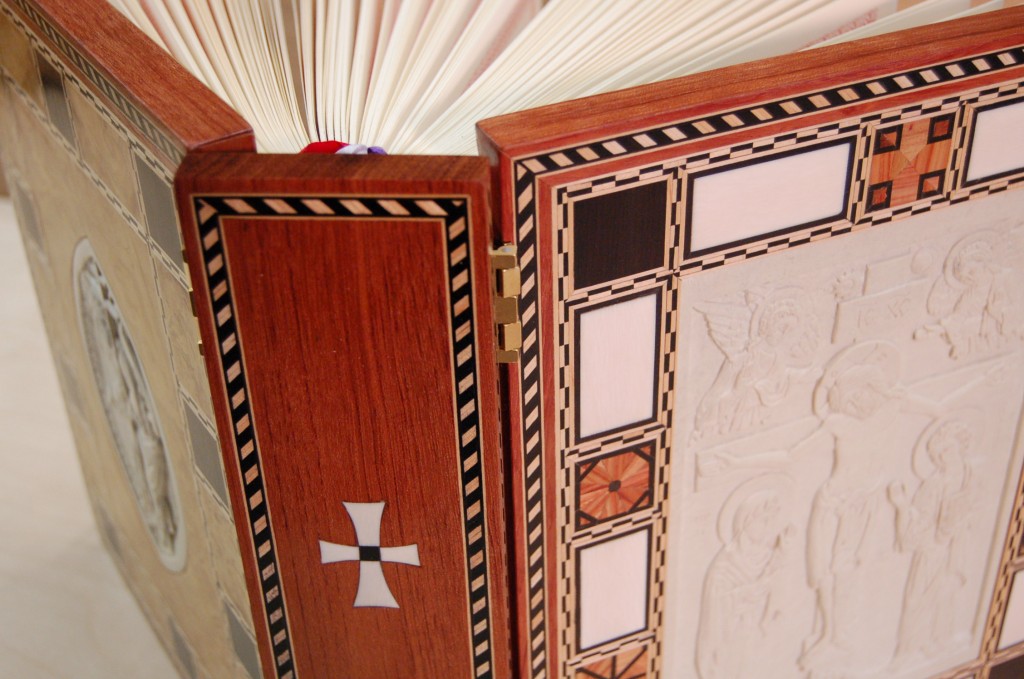 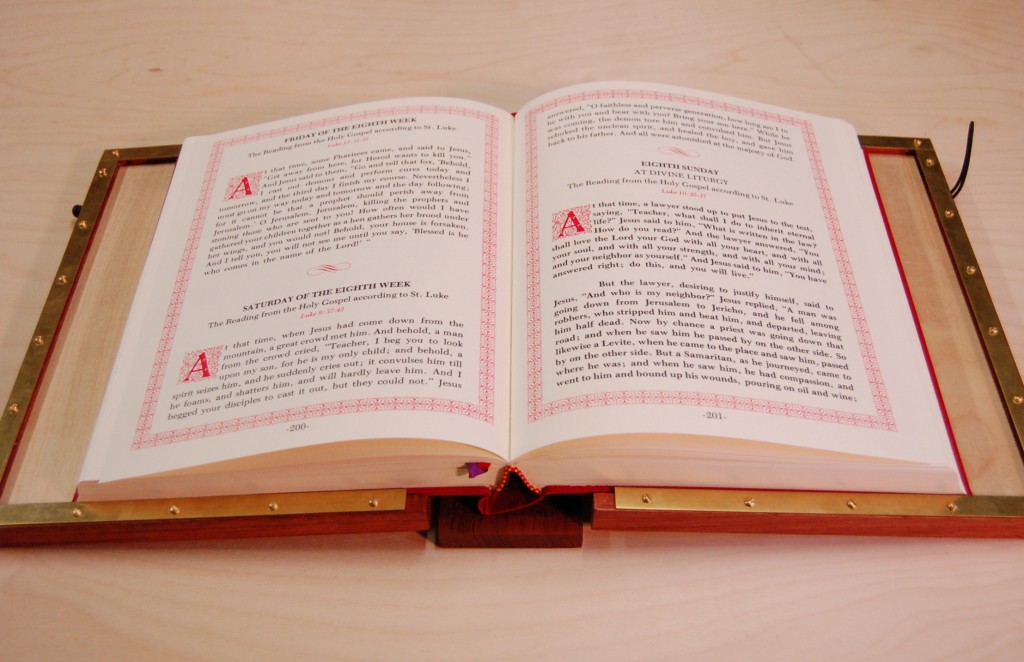 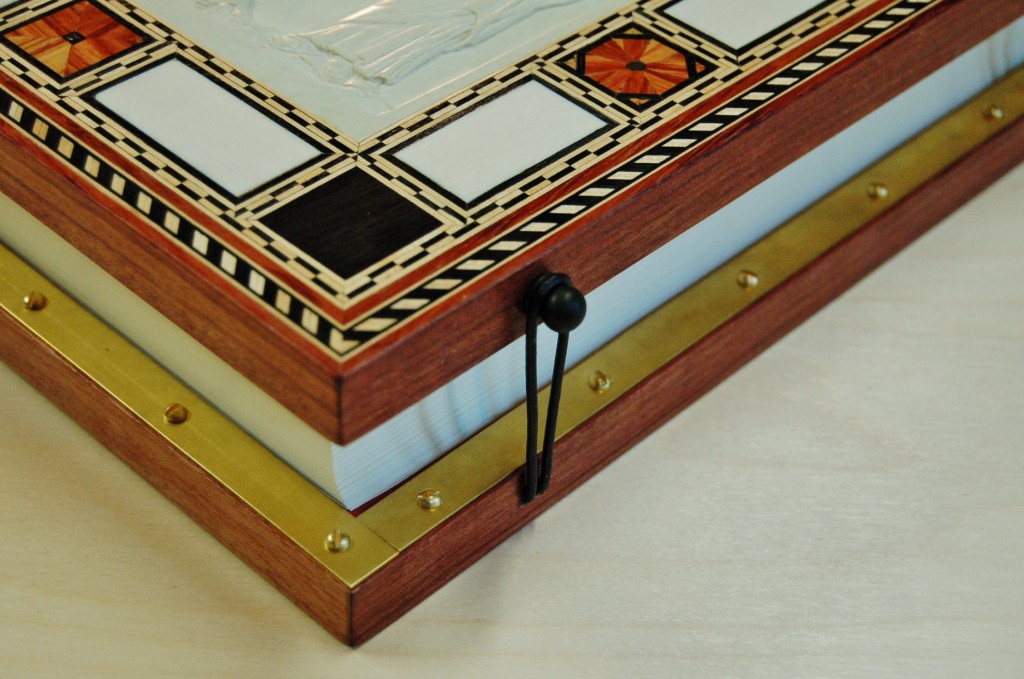 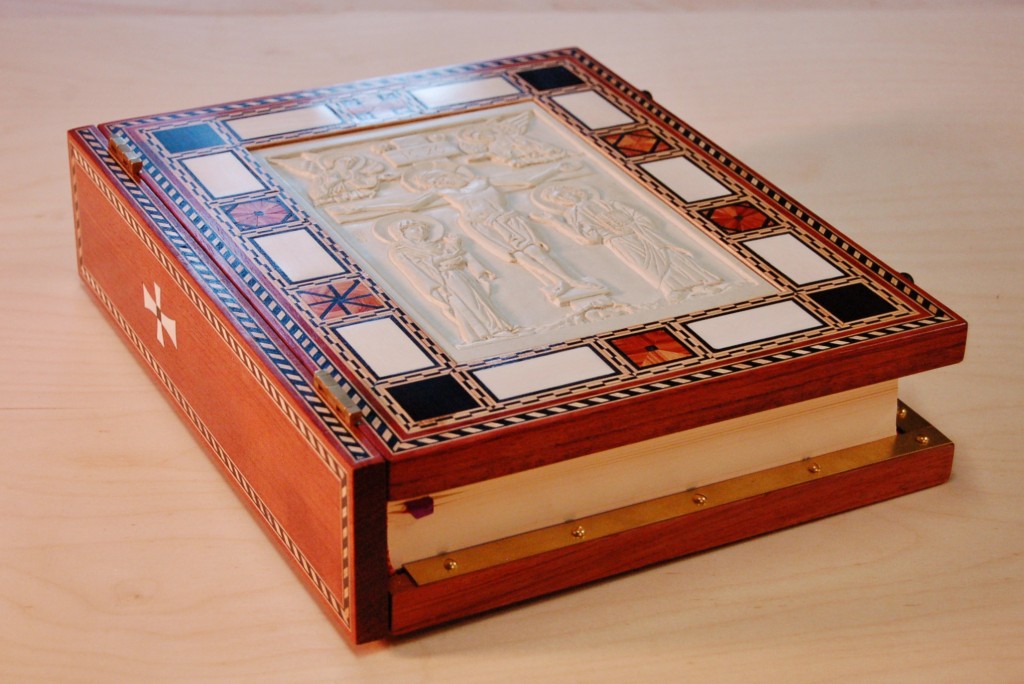 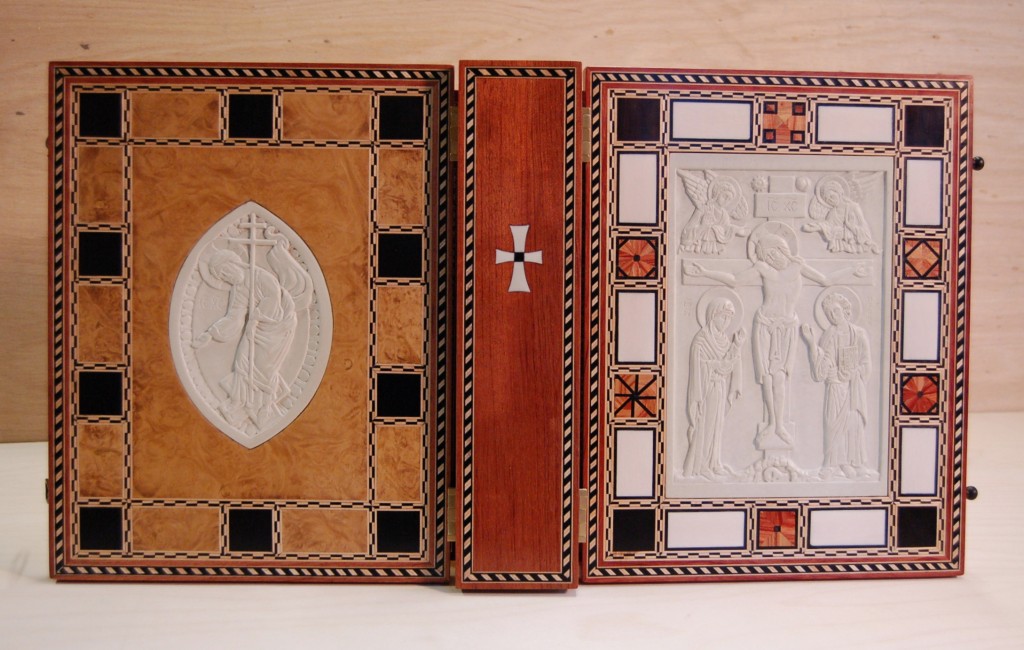 The liturgical work of Andrew Gould and Jonathan Pageau can be viewed at their websites New World Byzantine Studios and Pageau Carvings.