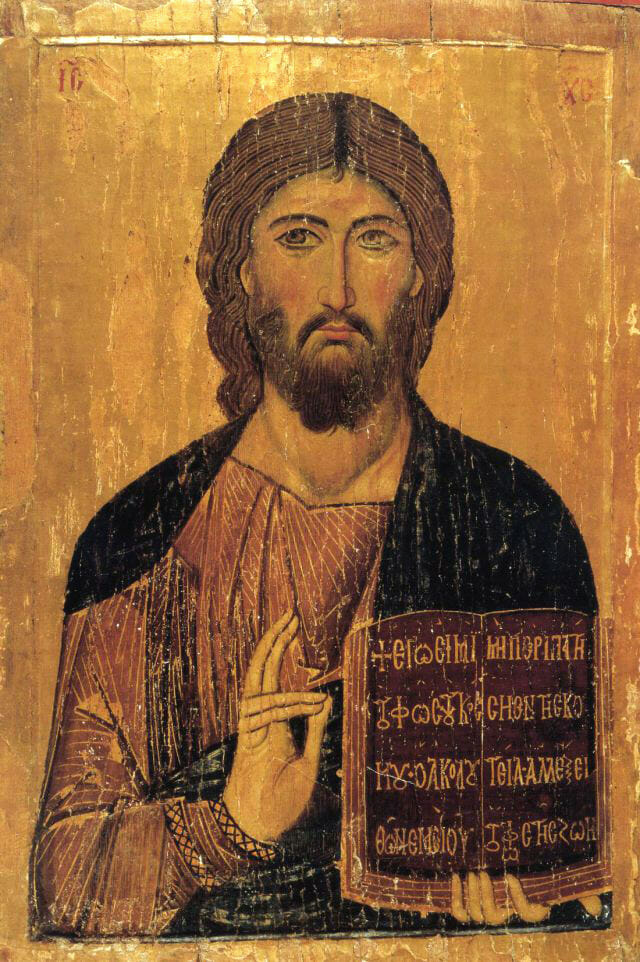 Many thanks to Mary Lowell for initiating a discussion of American Orthodox terminology – especially the problematic phrase “to write an icon.” Her article describes the technical problems with this translation very clearly, while acknowledging its appeal to many English speakers.

I have a slightly different perspective on this matter. I am an intensely visual person. I like to look at pictures or make them all day long, but am exhausted by reading, writing, or talking. I am unusual in that I find visual art richer and more meaningful than books or poems. When I read the news, what I really want to see is a press photo, as it tells the story to me better than the written words.

I know that this is unusual because I observe a bias towards text all around me. People would say “read an icon as though it is visual text.” But they would not say “look at a book as though it as textual picture”. Why not? The two statements are equally sensible, or equally absurd. (In fact, though, we do occasionally say the latter. I have heard people say, for instance, that a certain magazine article about some country “paints a picture of a society rife with poverty and corruption”. This phrase makes a lot of sense to me, as it accurately reflects the strength of pictures, which is that they show a lot all at once, in contrast to the weakness of text, which is that it says only one thing at a time.)

In reality, of course, we do not need to refer to one thing as another in order to understand that it has content and meaning. Pictures and texts each convey meaning in their own way. Each is equally capable of manifesting truth or lies. People seem to have forgotten this. Nowadays, written text is still universally understood to hold specific objective meaning, whereas many people treat visual images as though the content (and the beauty) is merely in the eye of the beholder.

In the Middle Ages, the arts of writing and picture-making were treated with real balance. The Church valued written scriptures and painted icons equally. Illuminated books contained both in equal measure. There was even recognition that icons had a special honor in that they could be understood by all, whereas only the educated could read books. Hence icons held great importance even to the Russian state. They were on the banners that led armies into battle, and on the kremlin gates to show the authority of the czar. Written texts could not wield such power over the masses in those days. 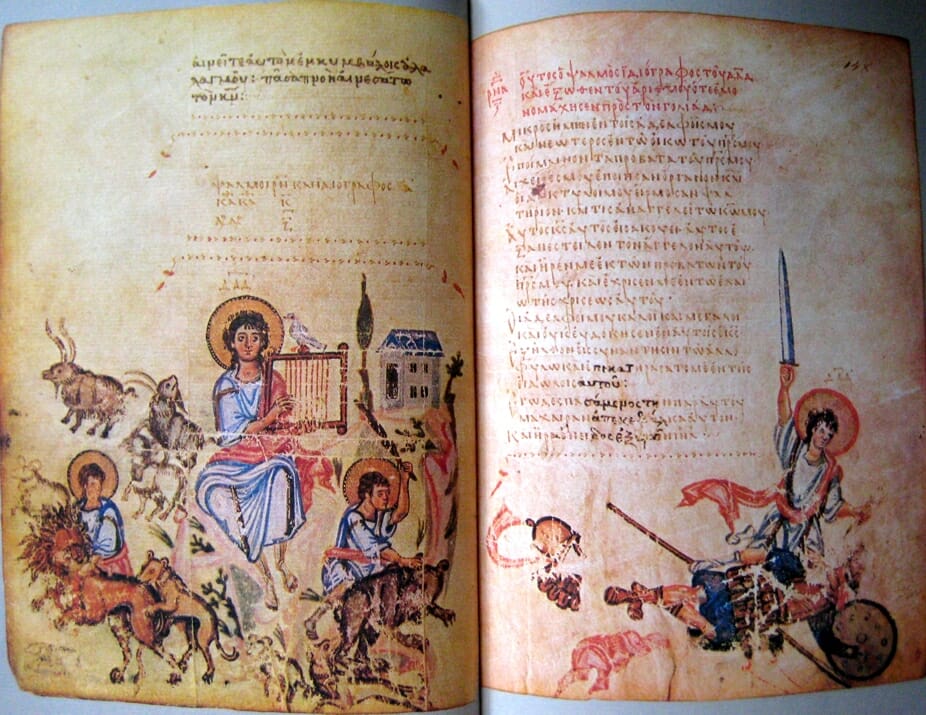 A Byzantine Illustrated Psalter from the 9th century (Chludov Psalter)

Today, the situation is quite different. Almost everyone can read, and the arts of writing are practiced with a high level of professionalism and in quantities never before dreamed of. Visual art, on the other hand, has decayed. Professional visual artists either hide in the esoteric world of modern gallery art, or serve prosaic ends for the merchants and media. Our culture almost wholly lacks profound visual art that moves the hearts and minds of the people. This is probably one reason that our society has developed a bias in which we believe text to convey meaning better than pictures.

Another reason has to do with modern academia. In the Middle Ages, academics were expected to be proficient in all arts and sciences. Educated men could draw, paint, compose music, interpret the stars, as well as read and write. An ancient university was a creative paradise in which the arts worked together to express all human knowledge of Earth of Heaven. Modern academia has lost this. Through the influence of the so-called Enlightenment and of 19th-century professionalism, the visual arts have been demoted and the study of letters has been exalted.

This bias is especially true in our seminaries. Men who become priests are mostly men who like to read, who can stand to learn ancient Greek, and who have a memory to quote scripture. Like most academic degrees, the Master of Divinity is designed for those who learn through words. A visual person likely would find it tedious in the extreme. The accreditors would hardly be pleased if a student asked to pass his exams by drawing pictures instead of writing essays!

It was in this textually biased atmosphere that the modern field of Iconology arose. Iconology is talking about icons, not painting them. It is a way of deconstructing icons and reducing them to words. In the hands of iconologists, an icon is a semiotic puzzle to be taken apart, reduced to figures, colors, and props. Each component is a symbol, a stand-in for a word, and the icon can be translated into its textual meaning. Iconology does serve a useful purpose – it is a way of introducing icons to the visually blind. It shows modern people who are not accustomed to meaningful images that there is in fact, meaning in images. Ultimately, it provides an academic framework for studying icons in a way that can be reduced to essay questions on an exam – an absolute requirement in modern universities. (After all, the obvious way to test seminarians on the knowledge of icons would simply be to ask them to draw them! But such a test would not suit academia).

It is not surprising then, that seminaries find the idea of ‘reading and writing’ icons appealing. In fact, probably most Americans find it attractive. It particularly appeals to converts from Protestantism. After all, Protestantism has always been rife with a text bias mixed with iconoclasm; if you say it’s written and not painted, then it’s not quite so much like the Catholic paintings that you always feared as a protestant. Of course, some people are attracted to Orthodoxy for more exotic reasons – the mysticism of Eastern religion, for instance. The term will appeal to them as well, because it implies gnostic secrets locked into the icons – an ancient language accessible only to the iniated.

I believe that all these affectations are ultimately harmful. Iconography was not contrived as an academic or mystical image-language. When Byzantine iconography arose, it was the natural style of painting used for all purposes in late Rome. It was as immediate and accessible to all people as cell-phone photos are to people today. We should not play up the exoticism or sophistication of icons. To do so may seem to exalt them in a romantic or academic sort of way, but in fact, it undermines their effectiveness as liturgical art. We should emphasize that icons are straightforward portraits of holy people and biblical events, painted in a way that makes them immediately accessible to our hearts and minds during prayer. If modern people have a hard time looking at them clearly, then we do not need to deconstruct the icons (and we certainly don’t need to replace them with a new style of painting) – rather, we need to teach people to see truth in beautiful images the way everyone once could. This is a matter of changing our culture, and it is not something that can be taught in school. A sensitivity to beauty can be acquired only by exposure to beauty. The church can gradually teach modern people to see by surrounding them with intense beauty, until the beauty of good icons and the truth of God’s kingdom become inseparable in our hearts and memories.

Before ending, I wish to address one very specific way in which the text-biased study of icons has been harmful. It has enabled a vast number of badly painted icons. The notion of ‘writing’ an icon has led many artistically inept people to attempt to make them. If icons are just a language of symbols, then anyone who can learn the language ought to be able to ‘write’ them. And so, we have had several decades now where people with some theological knowledge go and take a weekend class in ‘icon writing’, and declare themselves iconographers. After all, it’s pretty easy to copy the colors and robes and inscriptions in the prototype. What else is there to do? Well, there is the problem of making them beautiful paintings. This is not taught at the weekend workshops. It requires a lifetime of study and a good bit of artistic intuition. Only a talented student apprenticed for years to a master has any real hope of becoming an icon painter. But the idea of being an ‘icon writer’ – that is much more alluring, as it seems so easy, yet so sophisticated. And the opaque awkward icons that result will be immediately accepted by priests and converts the church over, because they too have learned to see icons by ‘reading’ them rather than by gazing upon their beauty.

I sincerely feel that the Orthodox Church has a serious problem with blindness to art (and also deafness to music – but that is another story). We benefit greatly from the cultural inheritance we received from the Middle Ages, but almost none among us can even imitate it, let alone build upon it. For the most part, churches are indifferent to beauty. They want things to ‘look Byzantine’, but will accept the worst imitations of Byzantine art as though an ugly icon or an ugly church is no worse than a bible printed in an ugly font – a minor technicality compared to the real meaning of the thing. The term “write an icon” is a symptom of this imbalance. The term itself is problematic, but the blindness that makes it attractive is a grave sickness for a church as ‘visual’ as ours. 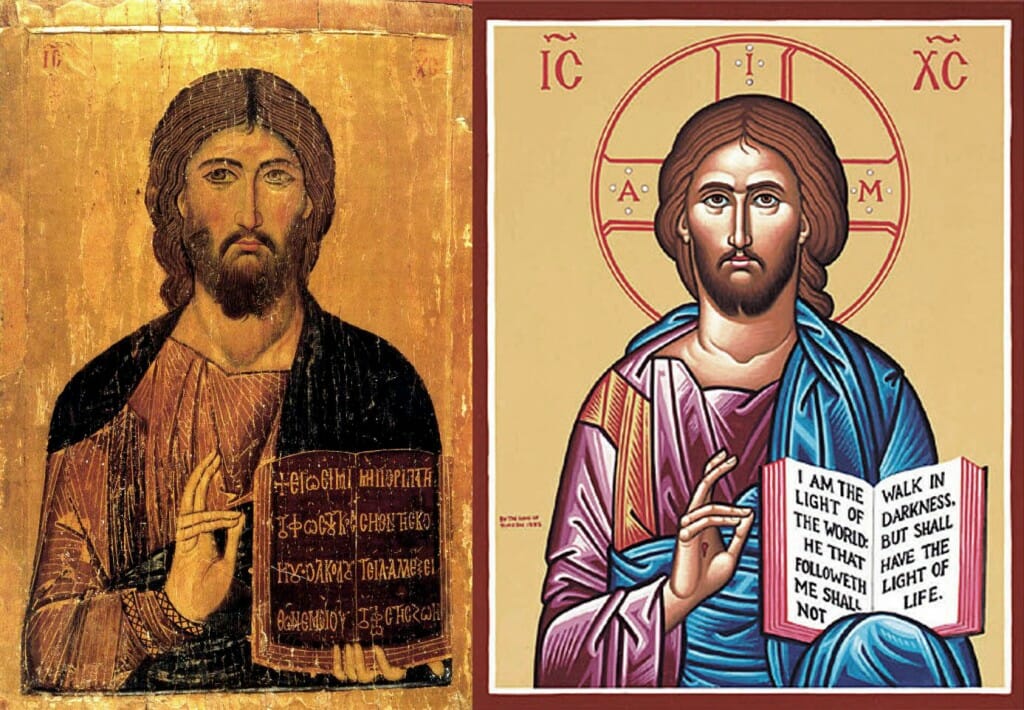 A Byzantine Christ Pantocrator juxtaposed with an example in the simplistic opaque style frequently practiced nowadays. Can anyone really not see the difference here? One is a portrait that breathes the very life and soul of Christ Himself, as though He were standing before us in the flesh. The other is nothing more than a hieratic symbol of Christ, as cold and lifeless as a plastic figurine. But an iconologist might say that the modern icon is correct, because the colors and inscriptions follow the ‘language’ of the canonical prototypes.