The Psalm 103 Project: A Status Report

It has been a little over two years since my last update on The Psalm 103 Project for Orthodox Arts Journal, so, perhaps now would be a good time to bring everybody up to speed again.

The Psalm 103 Project, for those just now joining us, is a major undertaking of The Saint John of Damascus Society. It involves six very different composers, each a specialist in a different repertory of Orthodox music:

The six of them have been tasked with a unique challenge: collaborate on a long concert work in which each sets a section of the Vesperal Psalm in his own musical language, but still making it sound nonetheless like a single, cohesive piece of music.

The objective of this sacred musical collaboration is for the work to make a creative contribution from an Orthodox standpoint to the current science and faith discussion that is so prevalent in our society. The Society’s board president, Harold Sabbagh, is an electrical engineer and cantor who cares very deeply about such issues, and this effort is largely the result of his excitement over CERN’s 2012 discovery of the Higgs boson. The psalm’s text, which celebrates the divinely created order from the very small to the very large, was an ideal place to turn for inspiration, and the collaboration allows for a musical expression of the unity in diversity of the universe. Eventually, we seek to have the music serve as the basis for a film project that, while being a creative collaboration yet to be defined, is nonetheless intended at this point to be a cinematic meditation on science and faith from an Orthodox Christian perspective.

When I last wrote about this for Orthodox Arts Journal in October 2013, we were just about to bring our six composers to Bloomington, Indiana for a working weekend in which they were tasked with hammering out their collaborative approach and organizing principles. I can tell you that it was fascinating to be a fly on the wall for those conversations; I shot video footage throughout the weekend that I am hopeful will eventually be seen by an audience, perhaps as part of the film. While I think it’s fair to say that nobody was entirely sure what shape the weekend was going to take or how everybody was going to work together, there was a fantastic moment, about twenty minutes into the first session, where one of them remarked, “We’re all trained musicians and Orthodox Christians who seek to practice our faith within our art form; we can all trust that we’re on the same page and speak each other’s language, even if we realize it a little differently musically.” After that was said, it was as though everybody realized they had permission to do this, so to speak, and things went very smoothly. 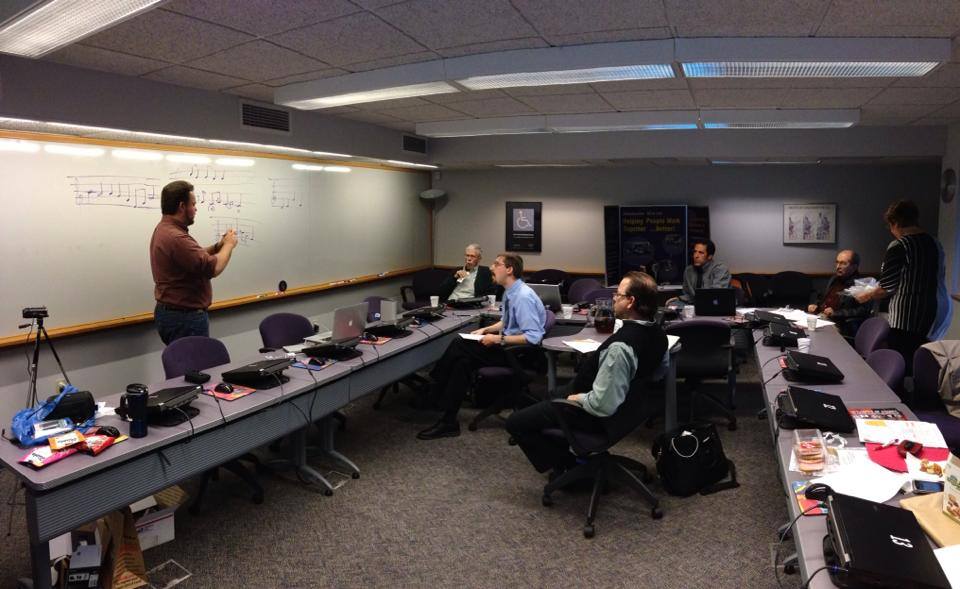 After the weekend was over, everybody went home and started to compose.

By February 2014, Richard Toensing had beat everybody else out of the gate by being the first of the six to turn in his completed sections. By the beginning of the summer, everybody had done enough that we had a large chunk of the work drafted, and we hoped to meet again in Cincinnati for a check-in and fine-tuning session.

Unfortunately, around this time, Richard called me and said, “I’m sorry, but I don’t think I’m going to be able to make it.” Several of us were able to meet anyway, but by the beginning of July, Richard had passed away.

I’d like to say a word about Richard’s involvement, if I may: of the six collaborators, Richard was probably the most skeptical at the outset about the project’s prospects. Nonetheless, he took the commission seriously and contributed to the fullest extent possible at all times. His influence can be seen across different layers of the work, and it can be truly said that it would not be what it has become without his participation. For example, his suggestions about how to approach the question of which English translation to use led to our consulting Archimandrite Ephrem (Lash), (official translator of the Greek Orthodox Archdiocese of Thyateira), and working with him as a group to craft a version of the text for Psalm 103 that would “sing” the way we needed. In addition, as it turned out, Matthew Arndt had been a Masters student of Richard’s at UC Boulder.

The music that Richard wrote for us is also nothing short of a gift; by itself it is a masterwork for the Anglophone Orthodox world. We told everybody during the working weekend, “Swing for the fences. Write for the strengths of the best choir you can imagine.” All of them did this in one way or another, but when I opened Richard’s score and saw antiphonal 8 voice choirs, I understood just how seriously he had taken me. The MIDI file is absolutely stunning; I can’t wait for everybody to hear it sung. 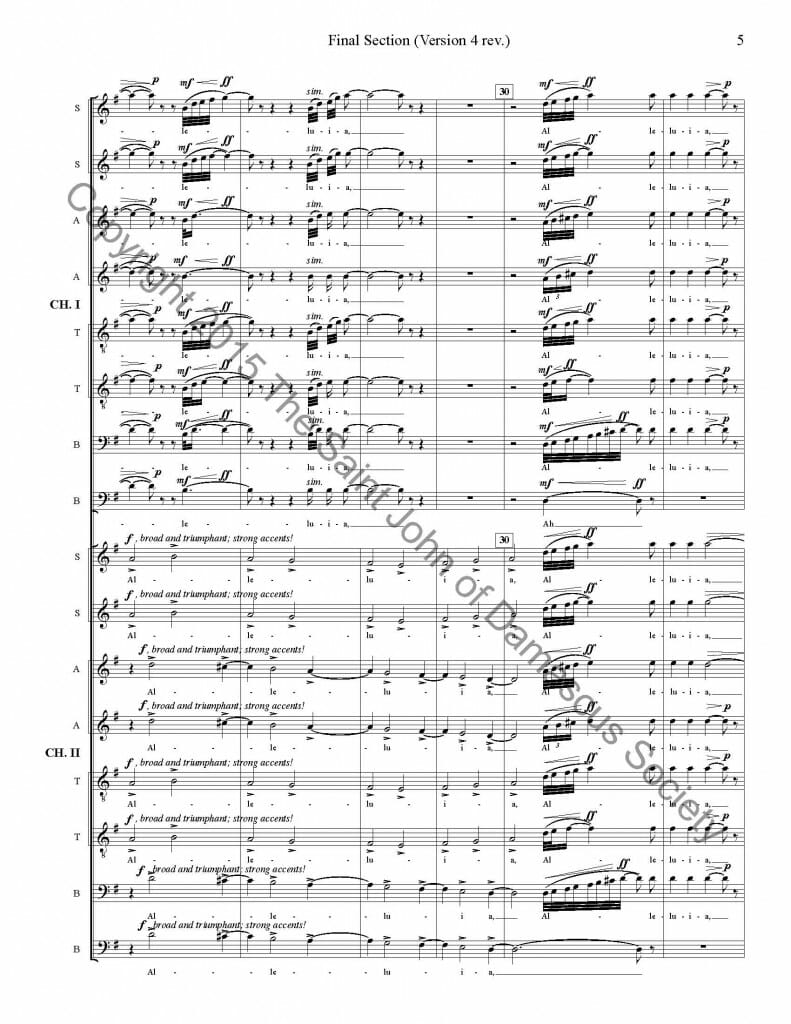 To take a moment to discuss the collaborative process itself: during our working weekend, Kurt Sander characterized the challenge as everyone needing to build part of the same house without knowing for certain what the house was going to look like. The six of them approached the problem by first dividing up the text, and then agreeing to some general structural points, unifying musical material, and approaches for handling the transitions. After everybody went home, they consulted each other as needed. When part of the group met up in Cincinnati in June of 2014, Matthew and Kurt did some catching up in person; Matthew wanted to see if, working together, they could improve the pivot from Kurt’s material to Matthew’s. He wrote out a couple of possibilities, showed them to Kurt, Kurt tinkered with them on his own for a bit, and then they agreed on a solution together, which Kurt then incorporated into the end of his score. As Kurt said to me later, “It’s definitely better.”

By June of this year, we had a completed score, which I presented at the conference of the International Society for Orthodox Church Music in Joensuu, Finland. We had successfully hit our first milestone.

So now what? Well, we have a number of tasks in front of us yet. Musica Russica is going to publish the score, and Vladimir Morosan is presently working on taking all of the raw Finale and Sibelius files and turning them into commercial-quality engraved music.

We are also working hard to plan the premiere performances and recording of the work. The Saint John of Damascus Society and Cappella Romana have an agreement that, funding permitting, Cappella will premiere the piece as part of their 2016/2017 concert season, and record it shortly thereafter. The CD will be released commercially, if all goes well, by Christmas 2017.

Within that timeframe we intend to start talking to filmmakers about the possibilities for the cinematic phase. As we did with the composers, we will treat this as a creative collaboration, and I for one am very interested to hear what will be proposed. As somebody born in 1976, Carl Sagan’s original Cosmos TV series has always been my point of reference for this phase; he did an unforgettable job of juxtaposing images of galaxies and stars and animals and plants and DNA with masterpieces of Western classical music, and even contemporary experimental music like Vangelis. Perhaps our filmmaker will come up with something similar; perhaps our filmmaker will come up with something completely different.

We need your help! We have been truly blessed with some lead gifts and grants; Richard Toensing’s wife Carol is very generously supporting the performances and recording, as is the National Forum of Greek Orthodox Church Musicians. We have a number of other individual gifts we have received and others that we are working on, and several other grants we’ve applied for and will apply for in the future, but nonetheless, we need your help, both in terms of fundraising as well as building awareness and an audience. Your contribution of any size, followed up by sharing a link on social media with your personal endorsement, will do a great deal to make it possible for us to keep The Psalm 103 Project on schedule. Visit The Psalm 103 Project’s website for PayPal buttons and to find out more; visit our Facebook and Twitter pages for current updates. You can also contact me — I’d love to hear from you! Your participation will make this happen!

The goal of The Psalm 103 Project is to inspire and engage a public audience by celebrating creation through creativity and tradition, and employing the diverse beauty of the music of Orthodox Christianity as a way to reflect and celebrate the great variety of God’s universe. I encourage you to look around on the project’s website, where you will find composer bios, a reflection on Richard Toensing’s involvement, a truly generous endorsement by Fr. Ivan Moody, a preview gallery of the score, and more. It is my hope that you will find the efforts of our collaborators on this project to be at once a blessing and an inspiration, and I look forward to sharing more with you as things develop. 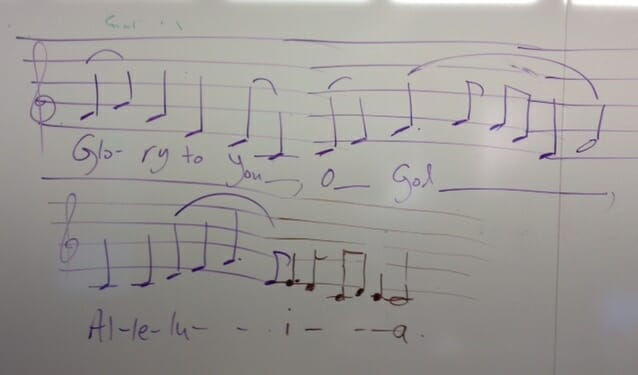