In June of 2014, I was a participant in Kurt Sander’s Pan-Orthodox Liturgical Music Symposium at Northern Kentucky University. While I was there, a gentleman whose acquaintance I had newly made, one David Lucs, on hand to give a presentation on children’s music education, was rather excitedly asking virtually everybody during a coffee break, “Are you planning on going to Finland next year? Finland anybody? Who’s got some love for Finland?” I didn’t know anything about it, so I turned it around to him. “I don’t know,” I told him. “Should I?”

“Yes,” David said, “you should. It’s the biennial conference for the International Society for Orthodox Church Music, Fr. Ivan Moody‘s organization. It’s a great experience — people come from Greece, Romania, Serbia, and everyplace else, there’s a fantastic sense of collegiality, and everybody always learns a lot.”

As it happened, shortly thereafter, Fr. Ivan himself was encouraging me to submit a paper for the 2015 conference, which was to have a theme of hymnographic creation. “Would a presentation on The Psalm 103 Project be appropriate?” I asked. “Of course!” was Fr. Ivan’s immediate reply.

“Okay!” I said. “Well, then, I guess I’ll submit something about that.”

My board president got excited about the possibility of presenting what we’re working on to an international audience, and once I got the word that my paper had been accepted, he was willing to pony up a travel budget for the conference. 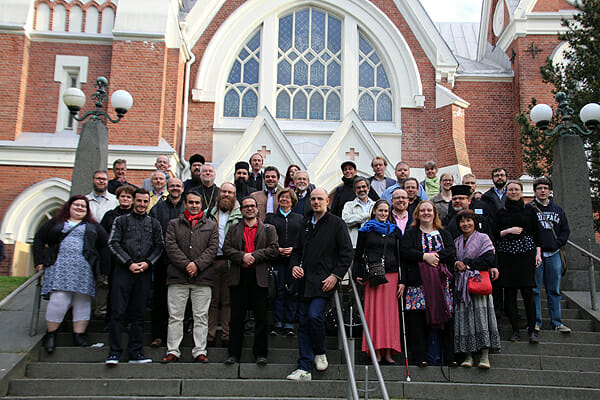 And so it was that in June of this year, I hopped planes from Boston to Paris to Helsinki to the Finnish college town of Joensuu, home to University of Eastern Finland, for ISOCM’s tenth anniversary conference. David Lucs’ promise of international collegiality was almost immediately fulfilled, with Orthodox musicians from all over the world — twenty-two countries — in attendance; there were composers, singers, and scholars from Serbia, Romania, Greece, Finland, Italy, Denmark, Sweden, Portugal, the UK, the USA, the Czech Republic, Japan (!), and more, reflecting an incredible diversity of musical idioms and areas of expertise. I came back with books, scores, and recordings by composers and musicians writing and singing in Finnish, Slavonic, and Romanian. I met Jaakko Olkinuora, who is the principal person right now working on composing Byzantine music for the Finnish language. I got to sing with Achilleas Chaldaiakis, renowned virtuoso cantor, Professor of Byzantine Musicology at the University of Athens, and director of the Maestros of the Psaltic Art, an internationally acclaimed Byzantine choir. I held ison for a Byzantine chant concert sung by a choir of Romanian cantors. The Estonian Philharmonic Chamber Choir gave an amazing concert of Orthodox composers such as Arvo Pärt, Alfred Schnittke, Rachmaninoff, and Fr. Ivan Moody. And so on. (I will also note that the sense of sacred musical fraternity was usually cultivated further over beverages well into Joensuu’s summer sunlit nights.)

A major difference between ISOCM and most of the Orthodox musical gatherings I’ve attended in North America is that ISOCM has a decidedly scholarly, rather than pastoral, focus. This is not to the exclusion of the practical concerns by any means; there were workshops, such as Achillea’s workshop on medieval Byzantine chant, as well as services throughout to which all attendees could contribute. However, the objective of the conference is not to provide advice on what to do when less than half of your parish choir reads music half as well as you’d like, but rather to provide a venue for musicians and scholars to discuss their work at a professional level, exploring the theme of hymnographic creation from diverse and sundry angles — Athonite musical manuscripts, chant traditions from Central Europe to Russia, modern akathist compositions, and even oratorios that take as their source sacred texts such as the Philokalia.

ISOCM’s setting makes this scholarly and professional focus possible in large part. As odd as it may seem from a North American perspective to hold a major gathering of musicians and scholars in the Orthodox world in Finland, Orthodoxy is very much part of the landscape there, being one of two recognized state churches (the Lutheran church being the other). and Joensuu, where the conference takes place, is home to Finland’s Orthodox seminary and a central Orthodox parish. From a European and Balkan perspective, it’s an easy trip, so many of the major players are within a 2-5 hour flight. It allows for a very different kind of conversation and atmosphere than what we’re generally accustomed to in the States, one that is able to contextualize the different national traditions as living expressions of Orthodox Christianity, and it represents a fantastic learning opportunity for North Americans (to say nothing of everybody else).

The rest of the American contingent included David, Kurt Sander, Gregory Tucker, Vladimir Morosan, and Helen Levenetz. David, Kurt, and I had an ongoing conversation in which all were very much of the opinion that an event like this needs to happen Stateside in ISOCM’s off-years, and care needs to be given to ensure that it happens at such a level of quality that international participants are encouraged to come, much as USA participants are encouraged to come to ISOCM. There has already been one such attempt to do something like this with PSALM in Chicago, 2006, and then Kurt’s Pan-Orthodox Liturgical Music Symposium last year in Cincinnati is the more recent effort. It can be done; the real issue is not doing it once, but rather having enough institutional continuity and memory across efforts such that it becomes its own well-oiled machine with no need to reinvent everything each time it happens. My gut feeling is that taking this on needs to be part of somebody’s full-time job; we’ll see what happens.

At the same time, Kurt, David, and myself all were of the mind that we also need to promote more USA participation in ISOCM. It is truly eye-opening to see the level of what’s going on in the rest of the world, and it is of immeasurable benefit to us to have the opportunity to see it for ourselves.

I strongly encourage you to become a member of ISOCM. It is reasonably inexpensive as these things go, and you get the proceedings of conferences as well as reduced registration rates for the bi-annual meeting. Even more than that, you get to be part of an international community of people who care a great deal about Orthodox church music. Membership is very much worth it, and you can click here to sign up: http://isocm.com/membership/

I will also follow my friend David’s example, and personally invite you to come with me to the 2017 ISOCM conference. 2015 saw record attendance; let’s break those records in 2017. You have almost two years; start planning now. Seriously, if you are at all inclined to attend, let me know; I’m happy to answer any questions you might have, and I’ll certainly help however I can.

To sum up: go join ISOCM (and like them on Facebook: http://www.facebook.com/isocm)! Watch this space for a discussion of a recurring USA-based conference. And come to Finland with me in 2017!