The Icon of a New Saint: Sophrony the Athonite

On the 27th of November 2019, Father Sophrony, founder of the Community of St. John the Baptist in Essex, England; monk, spiritual father, theologian, and iconographer, was numbered among the saints with the name St. Sophrony the Athonite. This was not unexpected as there had been rumors earlier, but still, it changed my life.

I joined Father Sophrony’s monastery in 1983 just before the start of a major painting project: the murals of the chapel of St. Silouan the Athonite.  I worked with Father Sophrony on the murals and also on several icons, mosaics and projects. One project was to paint his own Elder, St. Silouan, when he was entered into the list of saints. Then, as happened now, there had been strong rumors of his canonization so we dared to start the icon but left it without a name. We added the name the evening we received confirmation and put the icon in the iconostasis of the chapel.

Father Sophrony used to tell how his Elder was a constantly praying person and that his facial expression changed continuously, reflecting his inner life. He also said that no photograph gave him justice as the photograph is taken in a split second and does not reflect or represent the full person. On the other hand, an icon has to be a portrait of the inner and outer man. Little did I know that thirty years later I would find myself in the same position of painting my Elder.

From reading his life, it is clear that he was one of God’s elect who was deemed worthy to see the Glory of the Lord, and as such, his face was continually “transformed into the same image from glory to glory, even as by the Spirit of the Lord.” For this reason, it is very difficult to depict his face as an icon.

Before I began my work on an icon of St Sophrony, others were in existence; but there were few with which I could identify. Many of them looked like caricatures or were copied from photographs or exaggerated his expression around the mouth. Others represented him in his winter coat holding one of the buildings of his monastery. Another widely circulating image was of St Sophrony holding a chalice, but I remembered that a renowned iconographer had spoken strongly against icons of St John of Kronstadt holding a chalice, saying that the chalice cannot be attributed to any particular saint as all ordained clergy hold the chalice. So, at first, there was no obvious solution for me. Therefore, I surrounded myself with several photographs, prayed and started by asking St Sophrony to help me paint an icon to his liking. 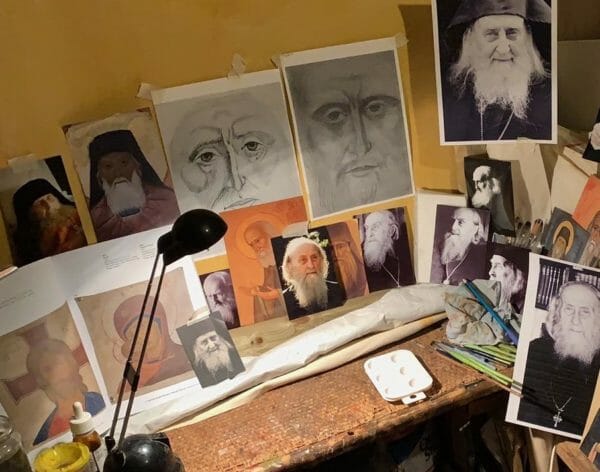 My working table with photos of St Sophrony

I settled on three main types of icons:

For the first icon, I painted St. Sophrony in monks’ clothing, his right hand blessing and his left hand holding the icon of his Elder. Making St. Silouan known to the Orthodox Church, to monasticism and to the whole world, was something that St. Sophrony himself considered to be the main purpose of his life. I worked for a long time and with much fear during all of Great Lent 2019. It was then that I encountered my main problem: how to present the color of his eyes which I remembered as a clear light blue. 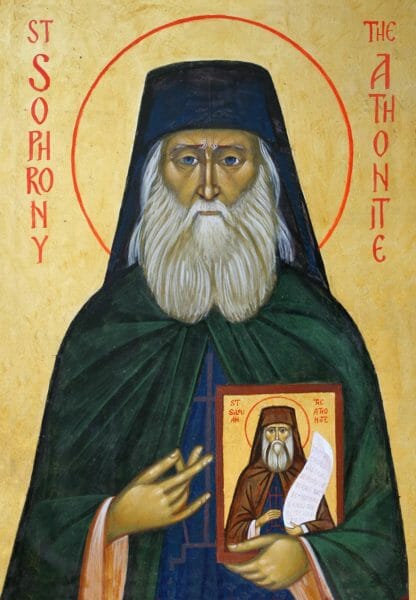 In this first icon, I did not get the color right nor did I succeed with the physical resemblance.  However, it felt like an icon to me and when the time came, we placed it in the chapel of St Silouan under the icon that St Sophrony had painted of his Elder. 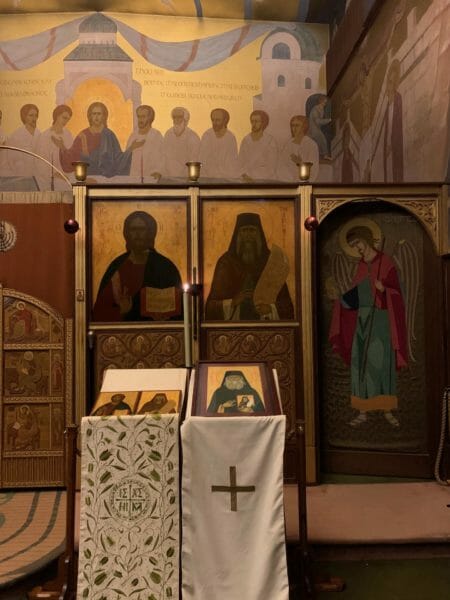 View of Chapel with First Icon of St. Sophrony

Next, I painted a smaller icon of St Sophrony holding a scroll, in order to write some of his own words on the icon. I intended this icon to be more personal and represented him bareheaded wearing the epitrachelion that had been embroidered especially for him in the 1960’s with the special symbol of the monastery on it. People who knew Father Sophrony’s dislike for kitsch criticized me for this icon.  Again, I painted the eyes blue, but they turned dark under the linseed varnish; so, I learned that I needed to block out the olive green of the sankir with white in order to obtain a clear blue. On the whole, I was less happy with this icon as I considered it to be less iconographic and more photographic in style. 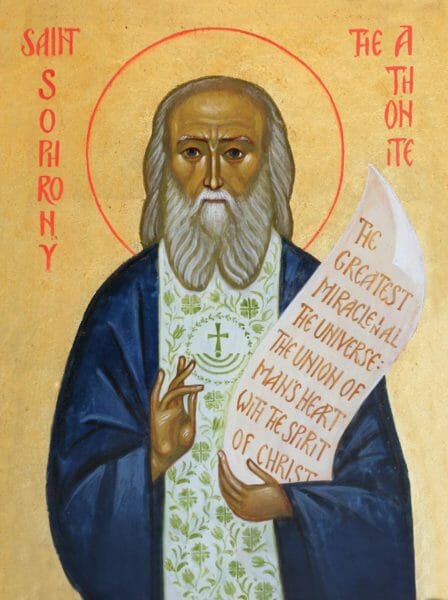 The two icons above were done in secret in my cell before Father Sophrony was numbered among the saints when I was at my ease having all the time in the world. But after the announcement, the situation changed; suddenly we needed more icons for several places.

First, an icon was needed on top of St Sophrony’s tomb. As it was urgent, I resorted to my pastel technique. I dressed him in full liturgical vestments and modeled them on the very vestments in which he had been buried, holding a Gospel book open to a relevant quote. The likeness of the face is marginal and the eyes are blue.  This time the acrylic varnish intensified the color and once more the eyes became too dark. 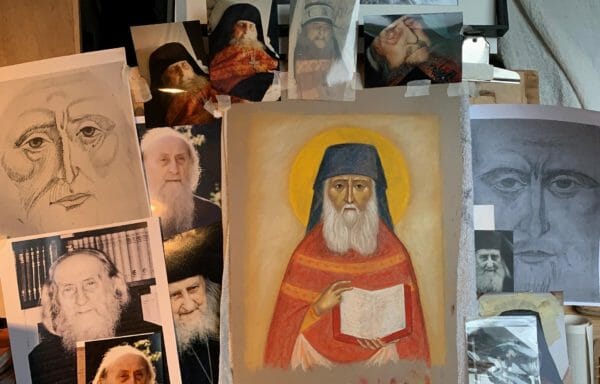 Icon of St. Sophrony for his tomb after his Canonization

The crypt where St Sophrony is buried had a mosaic crucifix as the sole iconographic decoration on the east wall. I suggested we add him interceding for the world at the feet of the crucified Christ. In order to determine the possibility of a future mosaic, I made a pastel study and adhered it to the wall. Here, I think both likeness and eye color are better than before. 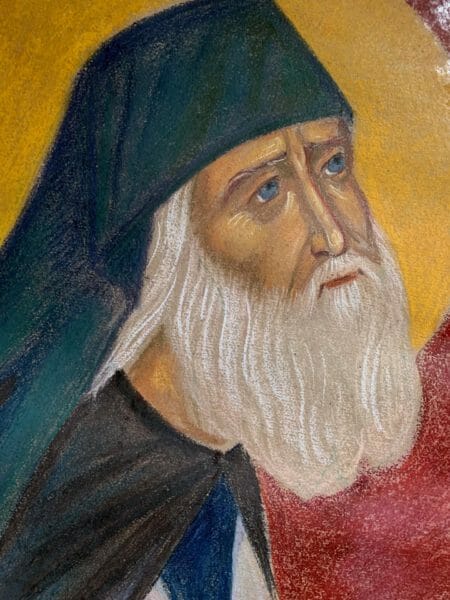 Icon of St. Sophrony venerating Christ on the Cross 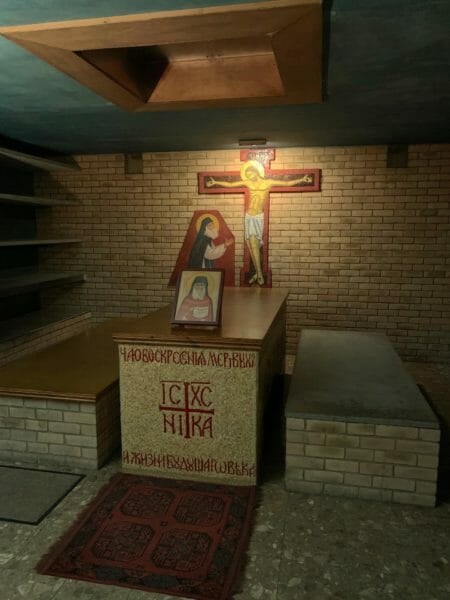 But once it was mounted in the crypt, it looked too asymmetrical so a study of St Silouan was added to the other side of the cross. 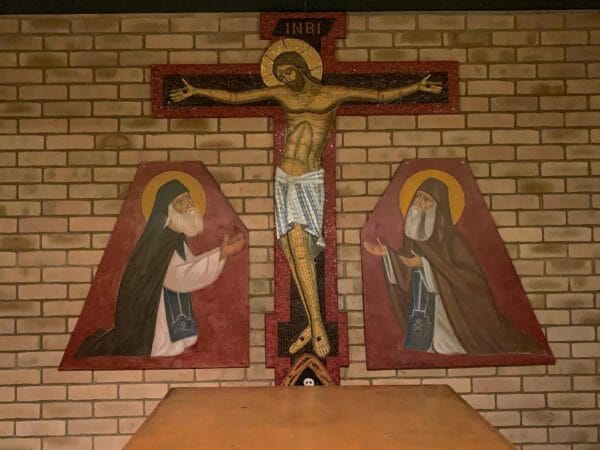 Icons of Sts. Sophrony and Silouan venerating Crucified Christ in the crypt of St. Sophrony

At this point, my question about blue eyes reached a peak. Years before, when a Russian iconographer was visiting, Father Sophrony asked him to paint a large icon of St. Silouan and he wanted him to paint the eyes blue. The iconographer refused and painted the eyes brown. However, since Father had made the request, it must have meant that St. Silouan’s eyes actually were blue. Nevertheless, he himself had painted the eyes of his elder brown in three places: a mural in the refectory, a mural in the chapel of St Silouan and the aforementioned icon of the icon screen.

I started asking all the iconographers I knew their opinion on the matter.

Some, in principle, were against it. Many agreed that if the eyes were blue, then they could be painted as they were. There were some valid points. The best argument against, was that a black and white photograph of a saint would not convey less holiness than a colored one. Others simply said that it was not part of Tradition; but here I have my doubts, because there are old icons with blue grey eyes. 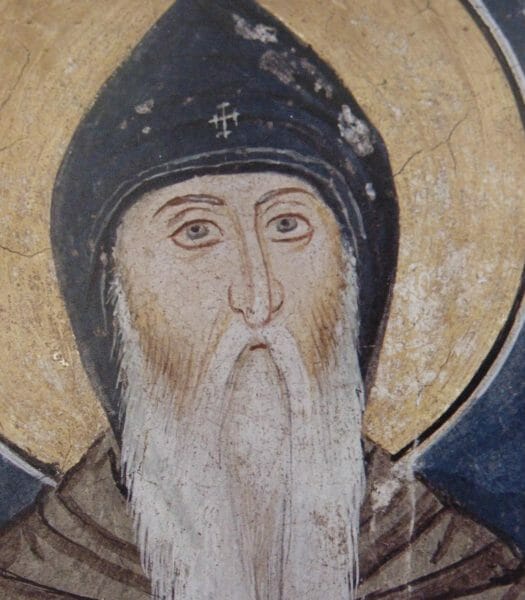 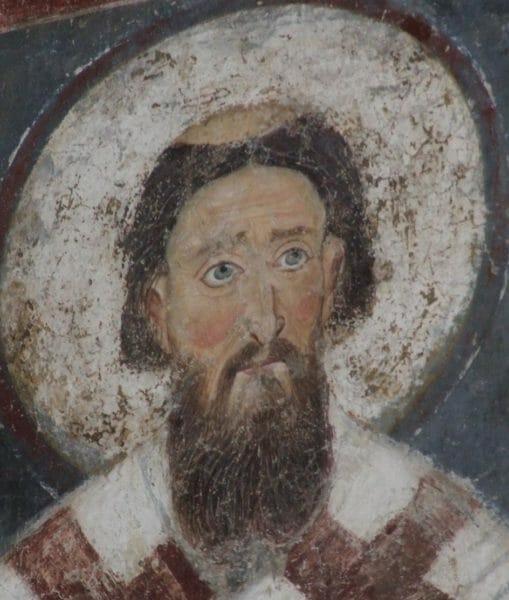 One friend who had just painted an icon of St Porfyrios, who also had blue eyes, suggested to keep the color a discrete blue, more towards the gray tone.

The next task was to paint our saint in our two refectories. The walls of the newer one had been painted in real fresco, in the Athonite style with standing monastic saints. Luckily, the saint who stood next to St. Silouan was S.t Theophan the Recluse who had several physical similarities with St. Sophrony. Therefore, we decided to “re-morph” him using egg tempera on top of the fresco. I locked myself into the refectory one Sunday night, blocked out the parts of the face that needed changing with titanium white and painted on top. In this case, the eyes became too blue. 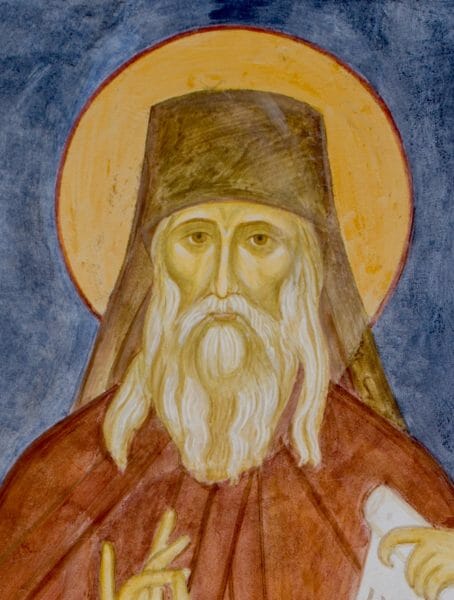 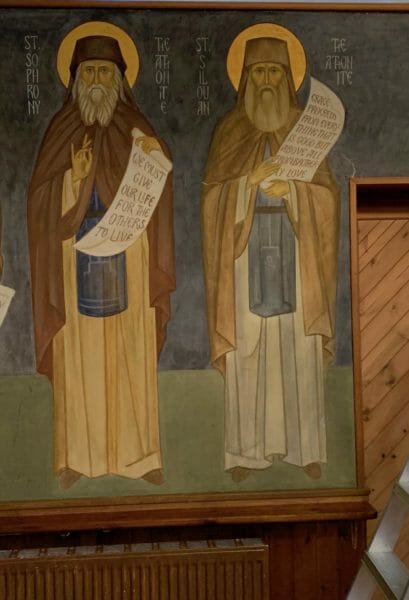 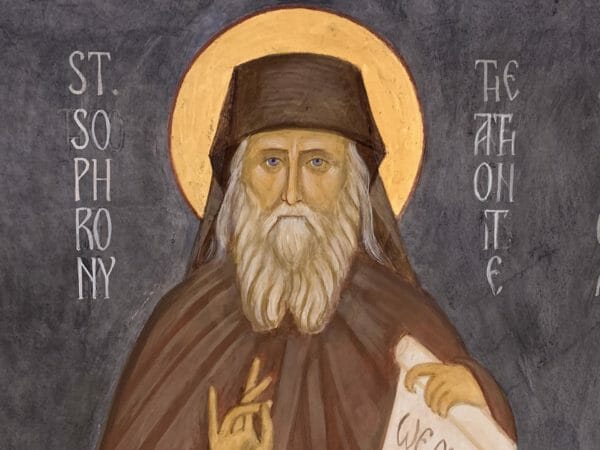 Afterwards, the most difficult work remained: to paint St Sophrony in the refectory which contains his own wall paintings, to paint him in his own style.

This was the time I learned the most. I found a photo of him which corresponded exactly to the position needed. I enlarged it and started working again in pastel. Almost immediately, I realized that it was impossible to work with the real features; they had to be given iconographic exaggerations. I cannot describe how the work went. I prefer just to illustrate with gradual photographs; but the result was something beyond me. I felt for the first time I was getting near to something more true. But it was not possible to make the eyes blue. Initially I did, but they did not fit into the general style of the murals. Although Father Sophrony himself had painted some of the Apostles’ eyes on the Last Supper in blue. 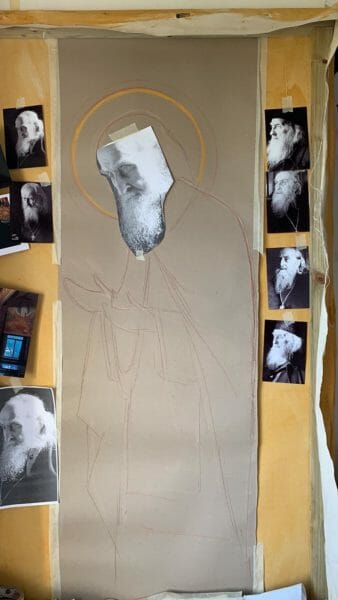 Work In Progress – Blocking out in Pastel 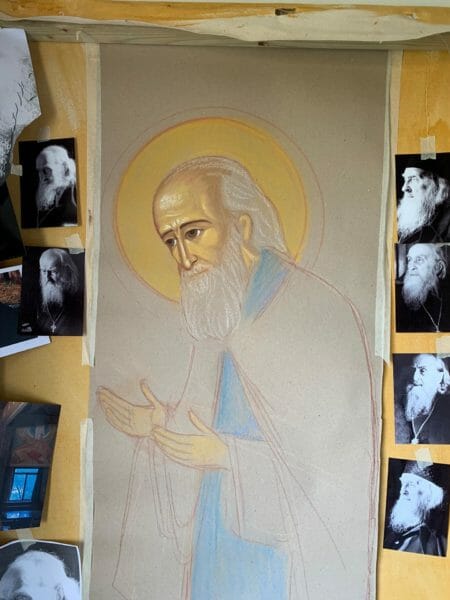 Work In Progress – Refining the face with pastels 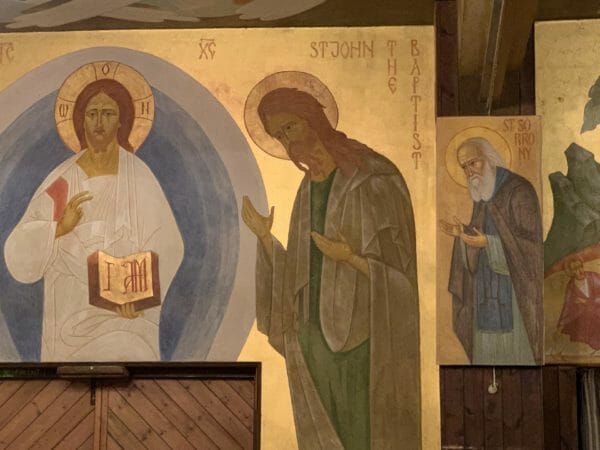 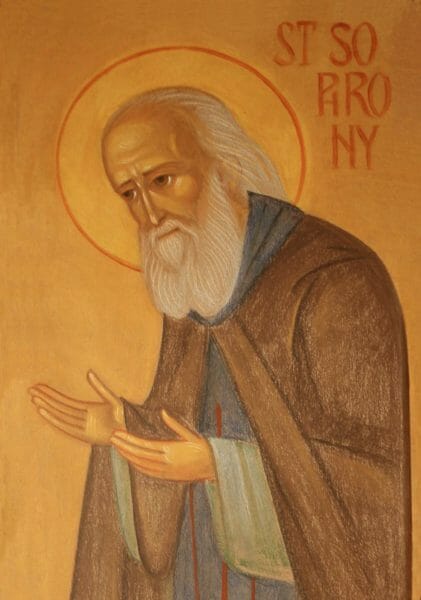 Detail of Finished Icon of St. Sophrony in Refectory

Since that day, I have painted many more icons of St Sophrony, some with monastic hat, some bareheaded, but always continuing to try to capture the correct blue eyes and at the same time striving to paint a worthy inner portrait, a true icon. 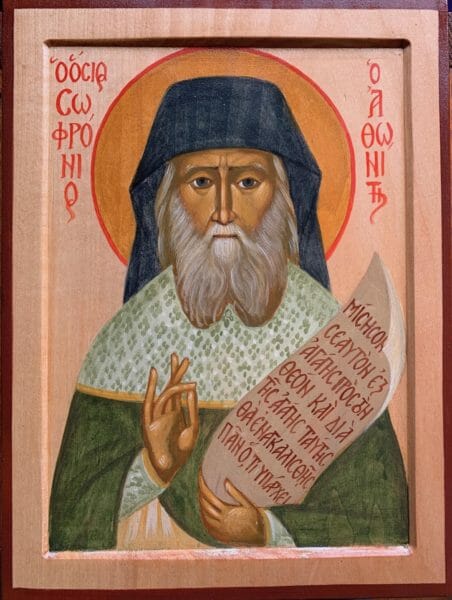 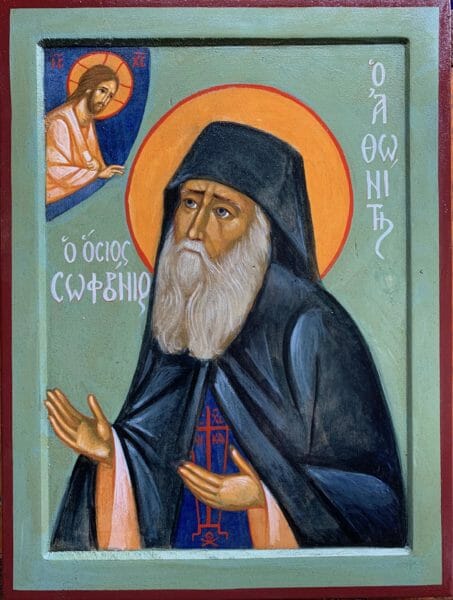 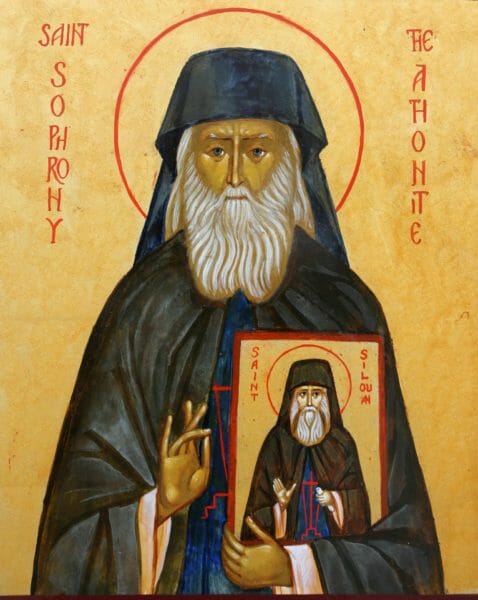 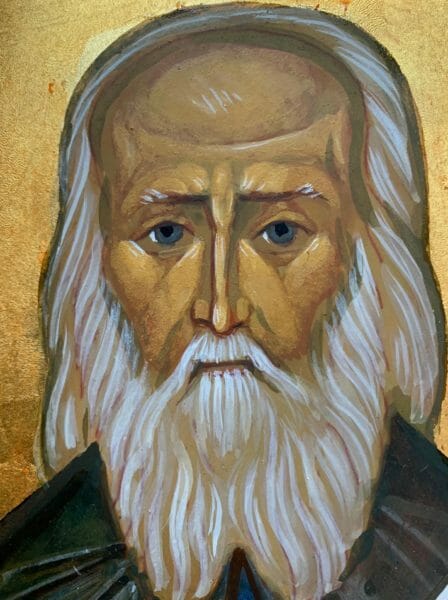 Detail of Icon of St. Sophrony 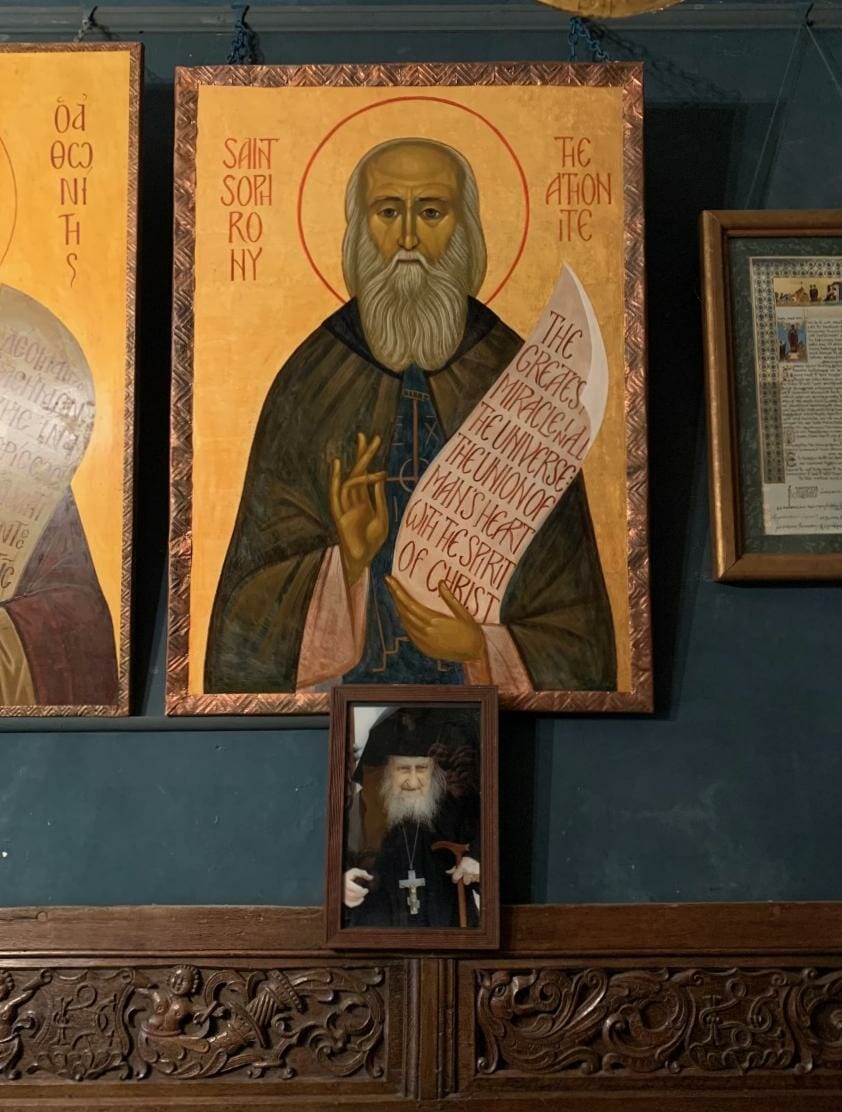 Perhaps it will be necessary to continue this search for the rest of my life.  I hope one day to succeed. However, I would be very grateful for any thoughts about this matter from my fellow iconographers.

In all the works described above, I found that St Sophrony both supported and assisted me. For this reason, now that he has been officially glorified, he will surely be encouraging and helpful to all iconographers. 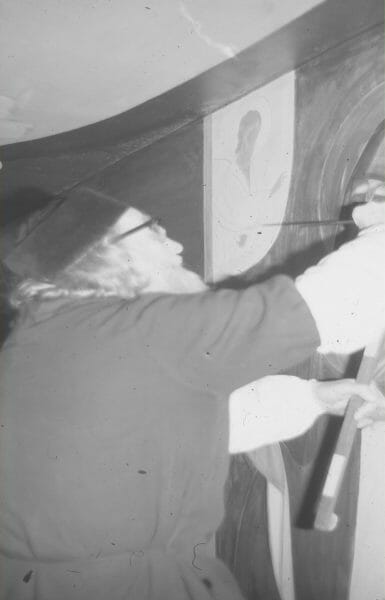 For an illustration of his own works, see the two volumes of his catalogue raisonné:

And our extensive article about St. Sophrony’s artistic work: Seeking Perfection in the World of Art: The Artistic Path of Father Sophrony 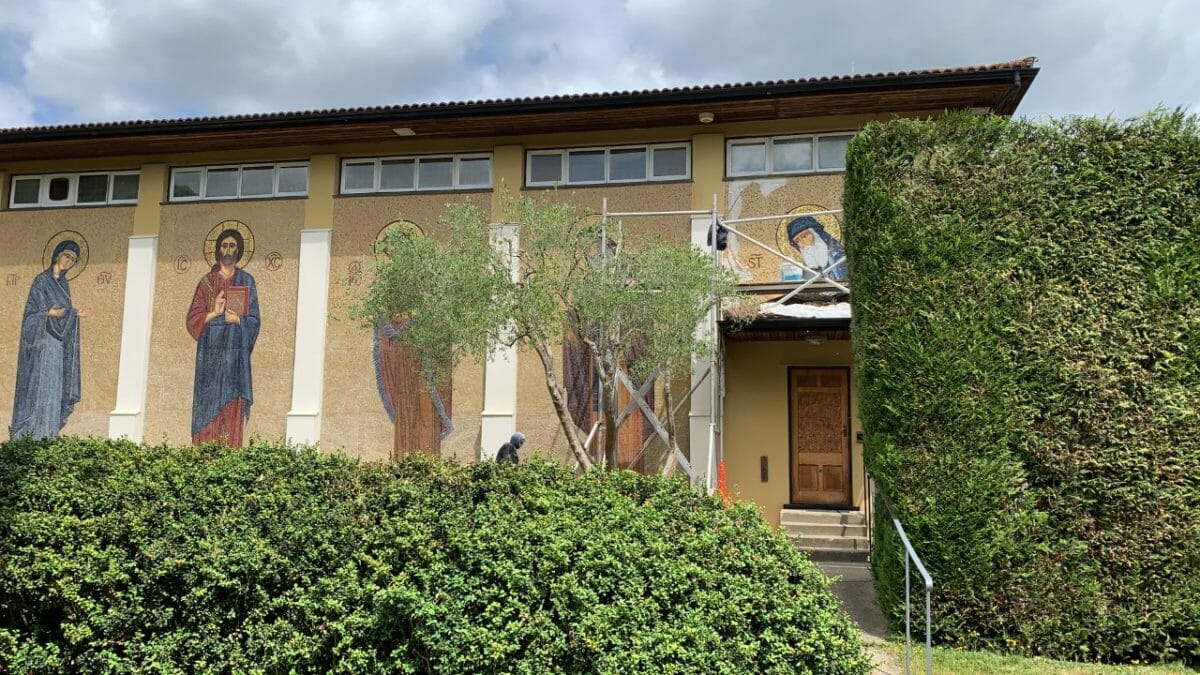 Mosaic of St. Sophrony underway this week at the Essex Monastery Chapel 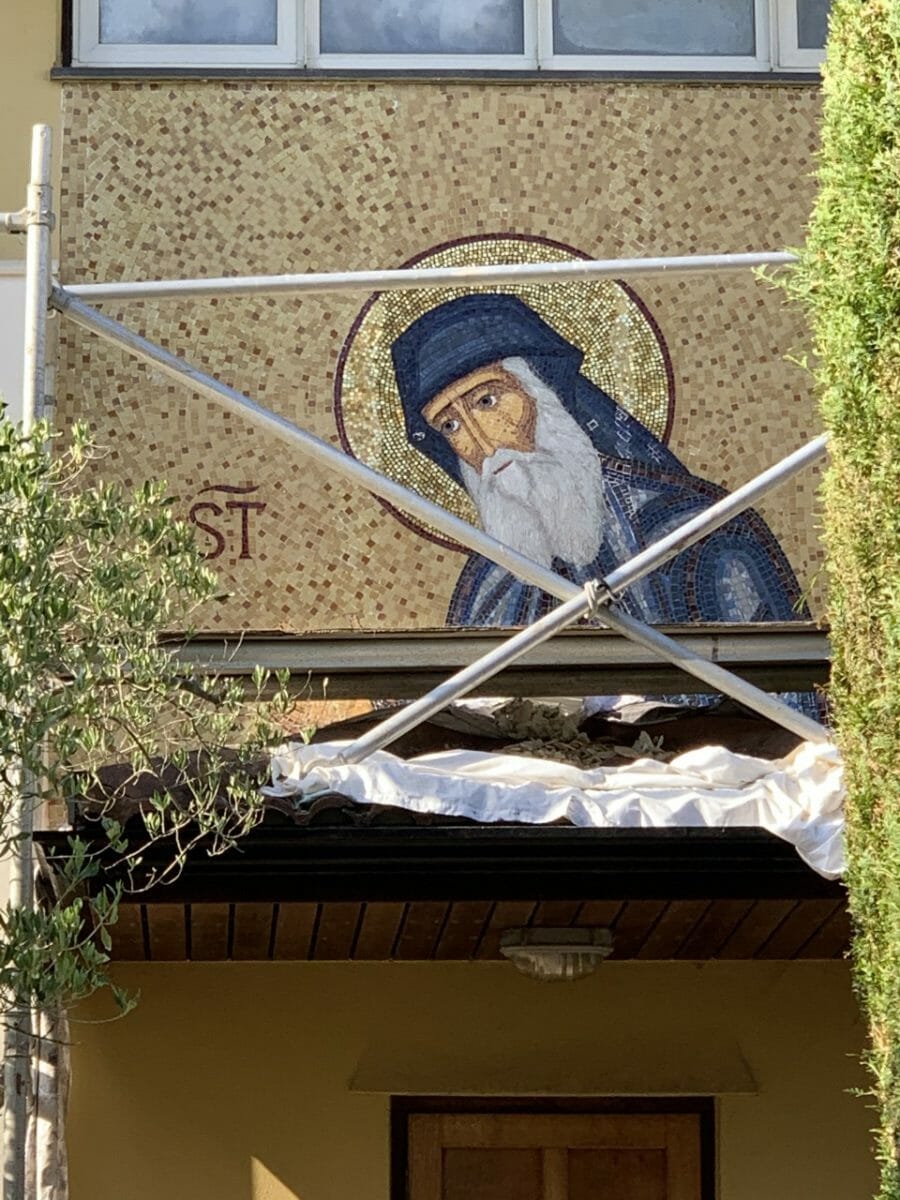