In preparation for our patronal feast, at the Monastery of St. Dionysios the Areopagite, we ran into the problem of our unfinished, blank iconostasis. What could be done for the occasion in order to make it more presentable? First, as is common, we thought of speedily acquiring temporary icon reproductions to fill in the empty areas. I cringed at the prospect of random, incongruous and out of scale reproductions glued into place. As most readers would know by now, I’m not particularly fond of icon reproductions, but, giving the constraints, I went along with the plan. However, it so happened that the icon reproduction vendor I contacted for the job was not able to meet the deadline requirements. So an idea came to mind. I proposed to our abbot, Archimandrite Maximos, that – although a challenge – I could get preparatory drawings done on time, within a couple of weeks, and install them as temporary icons for the feast. Through the grace of God it all worked out and the drawings were finished in two weeks and a half, just in time for the feast.

The drawings are sepia and white Conte on toned wrapping paper (due to expediency, but also as a way of not getting bogged down with perfectionism). They focus on the elaboration of form as was commonly practiced in Renaissance workshops. The paper was toned with pigment, the drawing was executed with silver point, ink or chalk, and later heightened with white gouache or chalk. This method renders abundantly rich results within what is ultimately its straightforward formal structure. 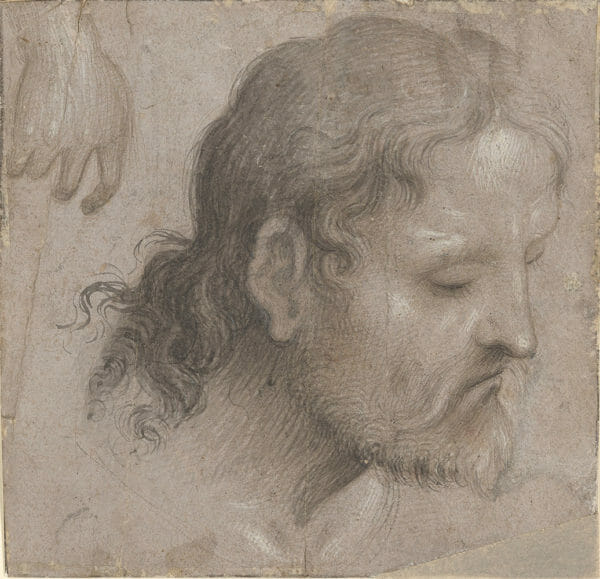 Lorenzo Costa (1460 – 1535), Head of a Bearded Man Looking Down to the Right, and a Hand , 15th century, brush and gray-brown ink, heightened with white gouache, over metalpoint, on gray-brown prepared paper. The Morgan Library & Museum, IV, 6. 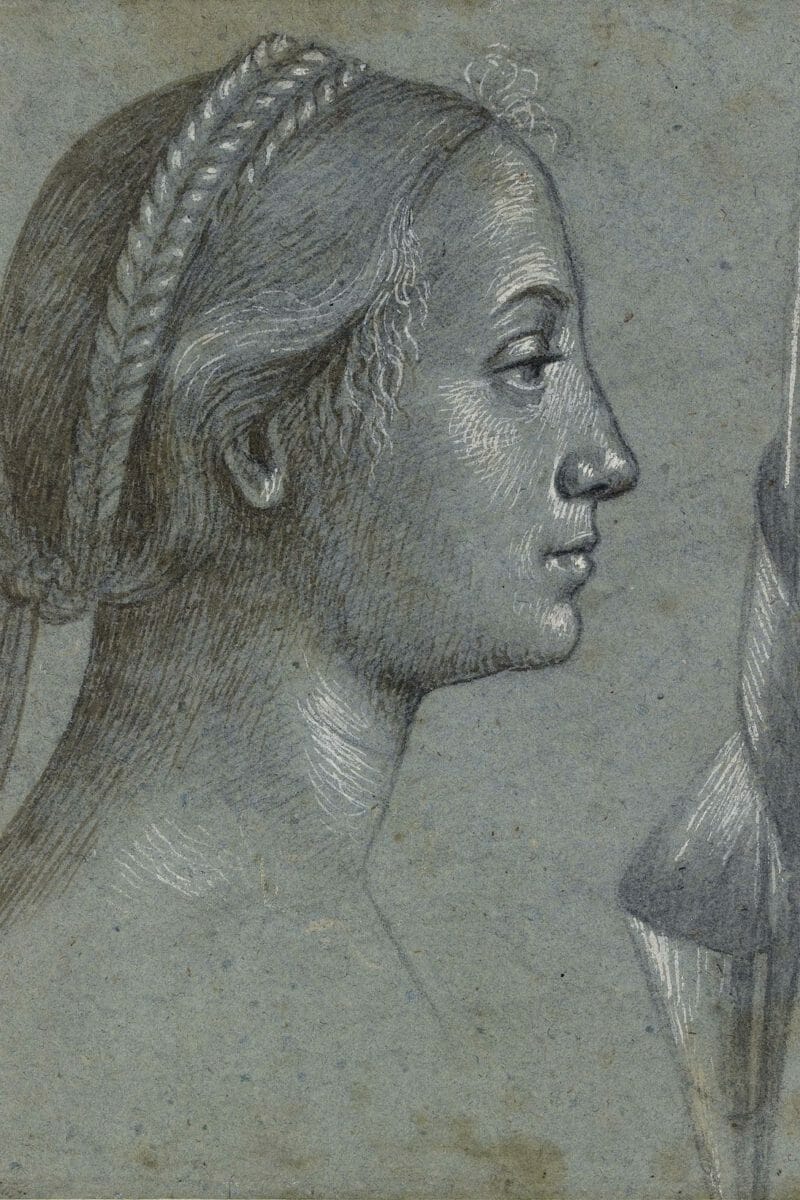 Good examples of its mature development can be found in the detailed drawings of A. Durer. And its graphic parallel can be seen in 16th century Italian and German chiaroscuro woodcuts. In icon painting a similar elaboration of the use of light and form in monochrome is to be found in the work of Theophanes the Greek, in particular his frescoes in the Church of the Holy Transfiguration in Novgorod. As these examples show the basic structure of a toned drawing can be stretched out to render very divergent results, from laconic and abstract, to abundantly detailed and almost photographic stylistic renditions. 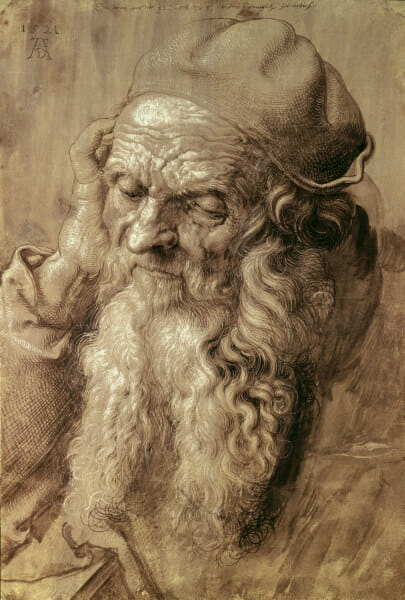 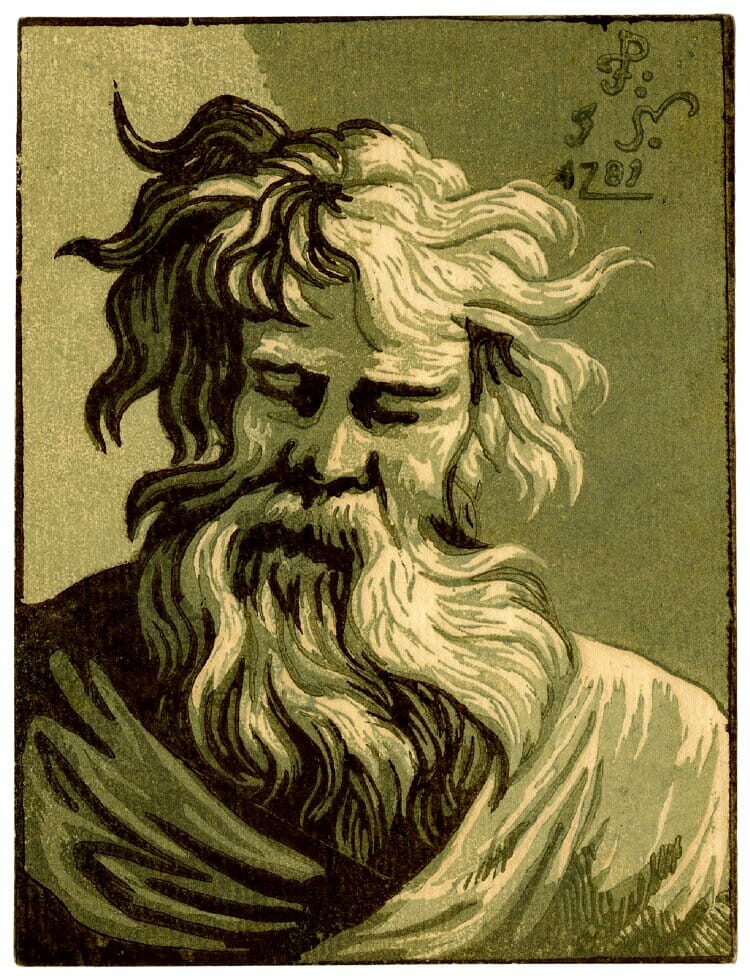 Bust of bearded man, facing front, looking down, his beard to right, eyes closed; after Parmigianino’s picture, now in the collection of Mrs A C Rayner-Wood. 1781 Chiaroscuro woodcut from four blocks in green and black. 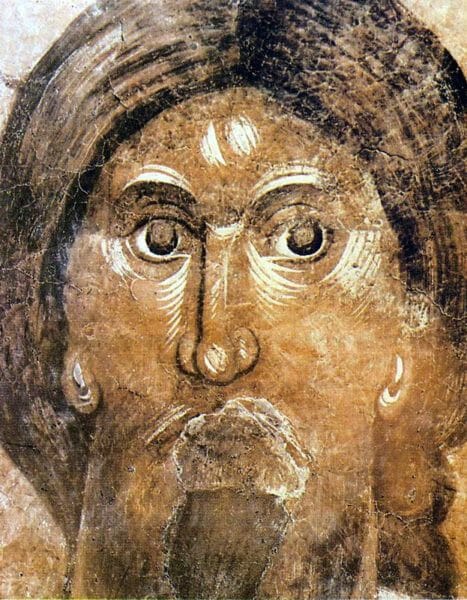 Christ Pantocrator by the Greek, 1378. Church of the Transfiguration of the Savior, Veliki Novgorod.

It seems to me that this can be turned into an alternative solution to icon reproductions for missions, parishes and monasteries, in need of something temporary until they can afford the realization of a full cycle of hand painted icons. Among other advantages, the preparatory drawings are done in the actual scale and format intended for painted icons. A cheaper and more aesthetically pleasing alternative to stylistically incongruous, out of scale and haphazard reproductions. What follows are photos of the preparatory drawings. 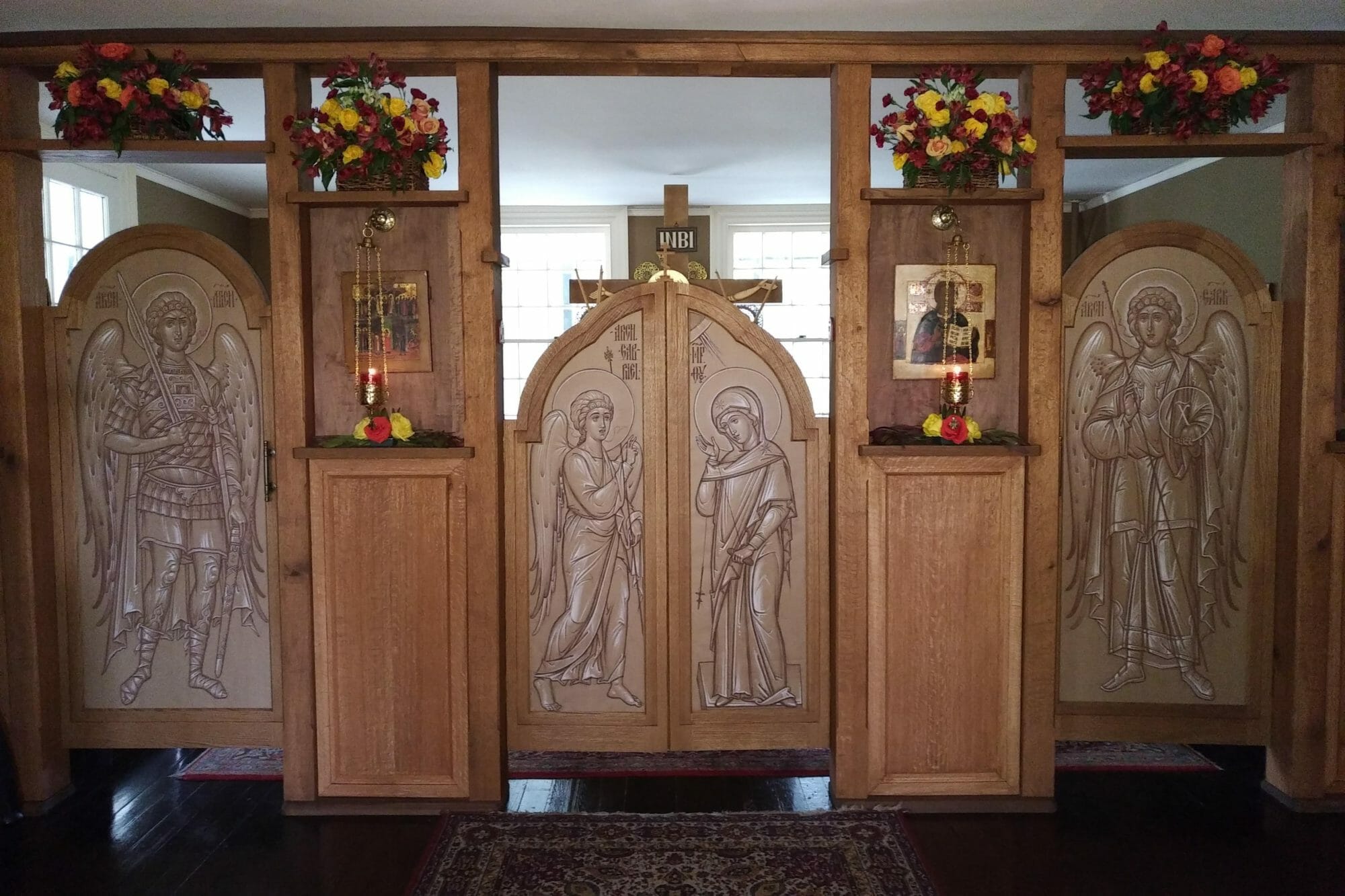 Preparatory drawings by Fr. Silouan Justiniano, as currently installed on the chapel iconostasis of the Monastery of St. Dionysios the Areopagite. The icons of the 12 feast cycle will be later installed in the empty spaces decorated by flowers for the patronal feast. 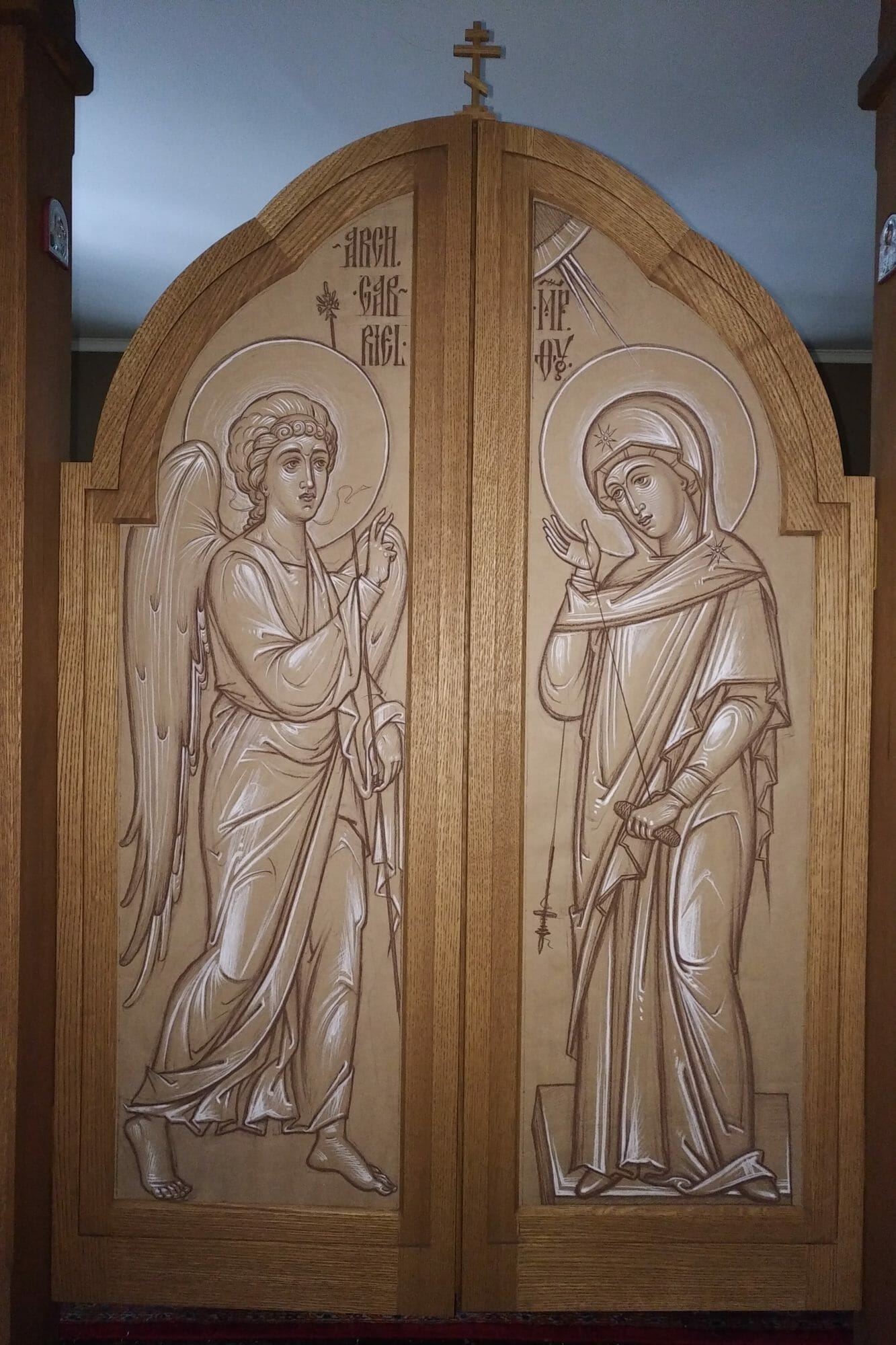 The Annunciation by Fr. Silouan Justiniano, 2019. 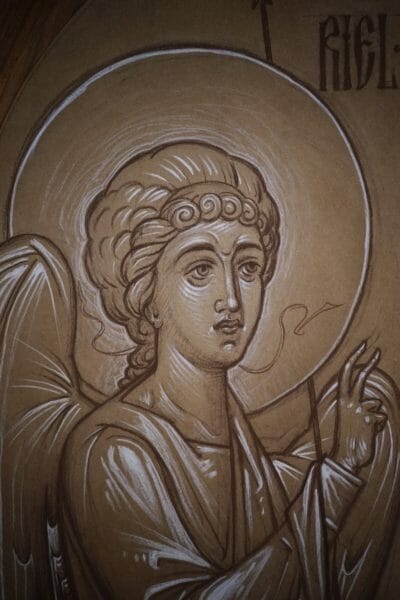 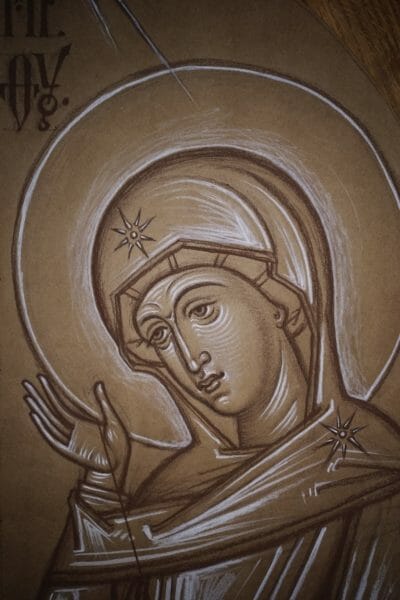 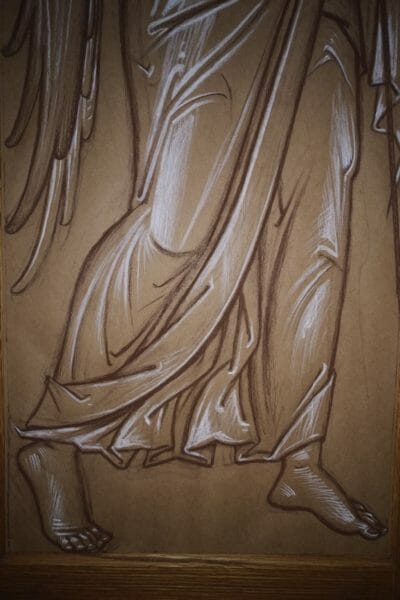 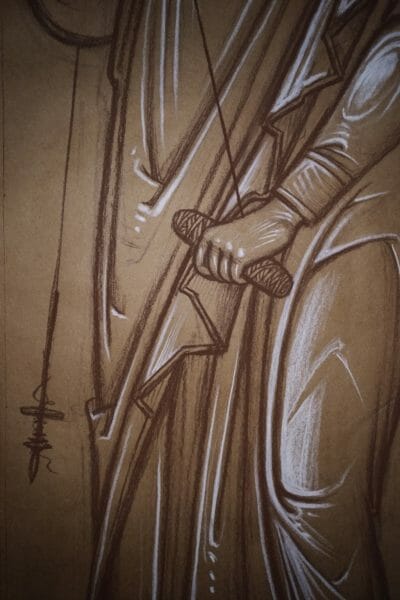 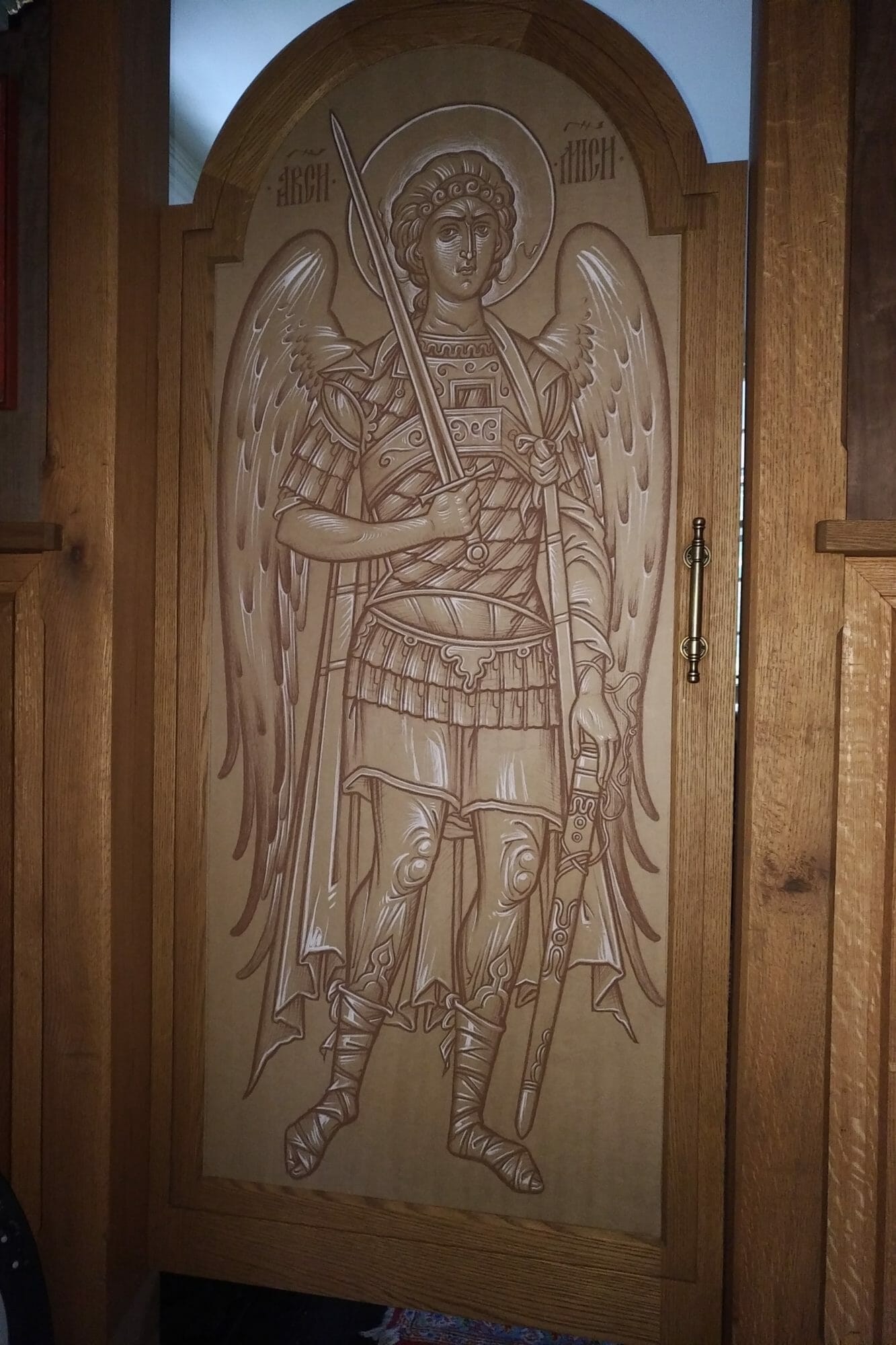 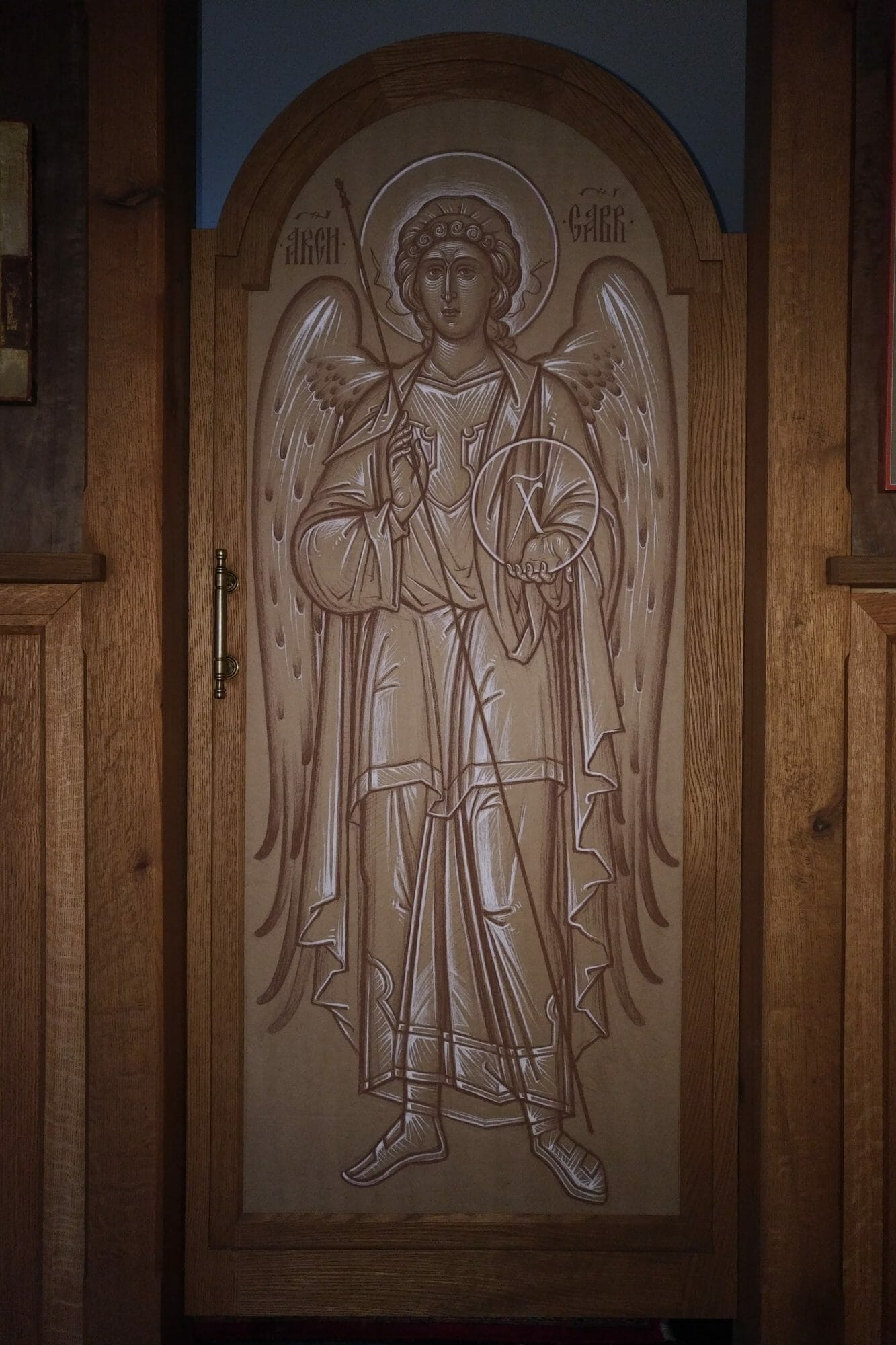 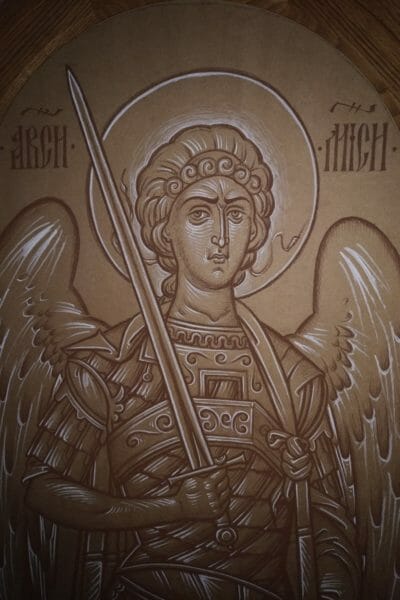 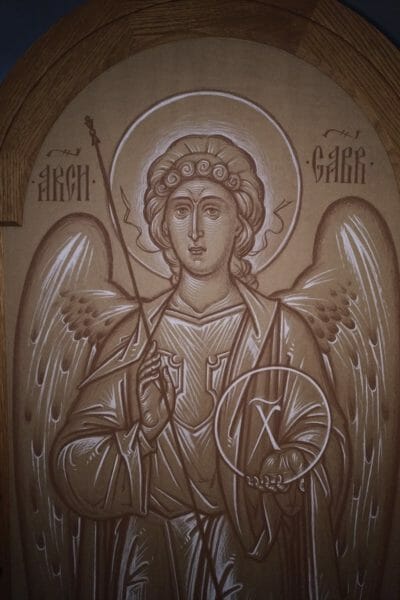 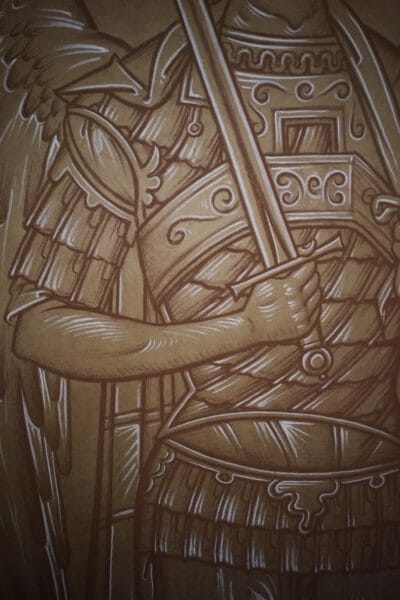 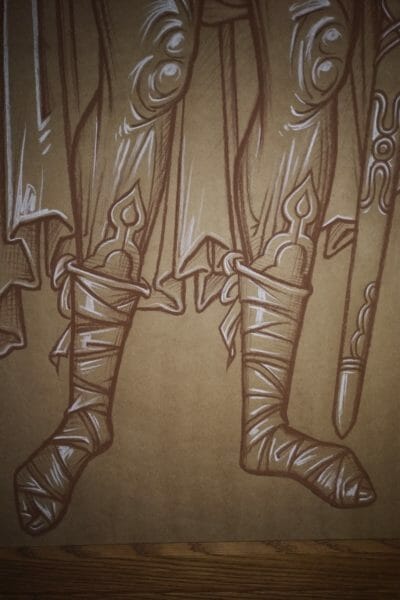 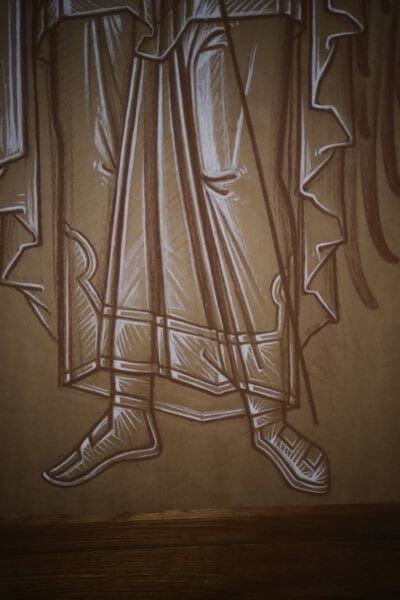 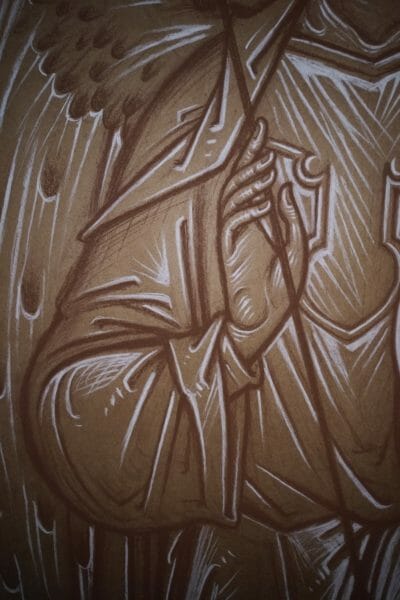 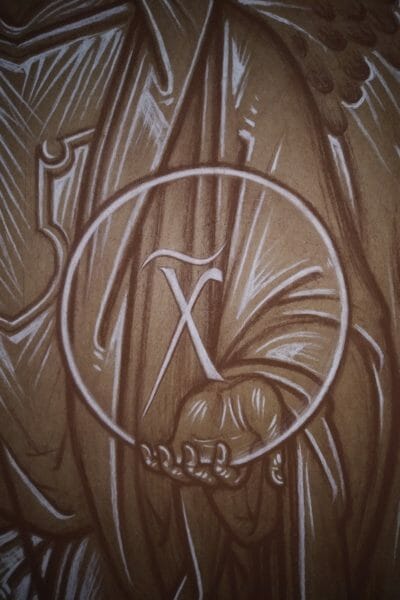