Editor’s note: The NY Times has published a very nice review of the St-Tikhon Choir’s concert led by Vladimir Gorbik. Here is an excerpt of the review.

The Patriarch Tikhon Choir, a mixed-voice professional ensemble of 35 American, Canadian and Russian singers, was formed recently to focus on Orthodox Christian sacred music, a tradition it hopes to nurture in the United States. 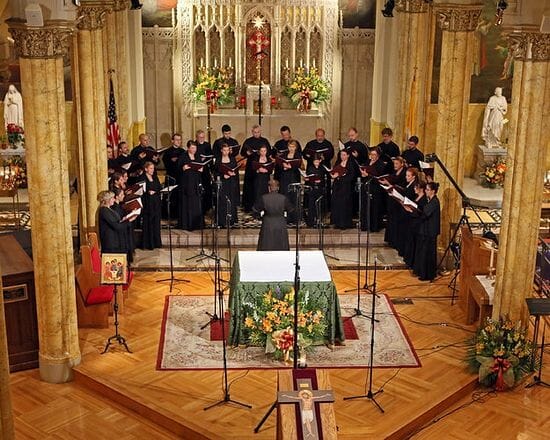 A substantial audience that included many monks turned up to hear the ensemble — named for a missionary saint who helped expand Orthodoxy in early 20th-century America — give its debut concert on Monday evening at St. Malachy’s Roman Catholic Church (the Actors’ Chapel) in the theater district.

Led by Vladimir Gorbik, a conductor on the faculty of the Moscow State Conservatory, the ensemble offered a program called “Their Sound Hath Gone Forth.” It featured works from the Orthodox All-Night Vigil and Divine Liturgy, including stark centuries-old Znamenny Chant, with selections sung in both Church Slavonic and English.

The chorus demonstrated an appealingly blended sound, austere and somber in the chant and joyous and more full-blooded in the works by Rachmaninoff.