As we watch Oriental Christians in Iraq and Syria being branded, massacred, chased out of the cities they have occupied for nearly 2000 years, we shudder and pray and grind our teeth.   As we watch the burning of Churches, the defacing of icons, the destruction of shrines, even that of the Holy Prophet Jonah we wish only to join our voices to the Martyrs under the Heavenly Altar and cry out:  “How long, O Lord, holy and true, dost thou not judge and avenge their blood!”

These events, these bloody and horrible attacks are not empty, these deaths are not meaningless. Since the time of the Holy Prophets very little has changed. History, today as always, still unfolds according to Divine Patterns. Indeed for those with open eyes, the “signs of the times” are more than simply a figure of speech or a waiting for the “rapture”. And so I would like to offer up to you the sign of Nūn, the letter used by the Islamic State militants to brand Christian homes. 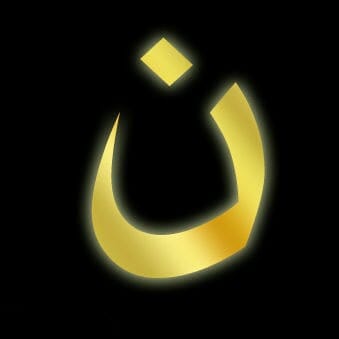 The letter Nūn, is the “N” sound and is used to designate Christians because it is the first letter of the word “Nazarene”, the ancient name used by Muslims to denote Christians. This letter has quickly become an “icon” in the modern sense, a simple tag that imprints itself so easily in our mind because its simplicity makes it universal and quite beyond common language. As soon as news came out that the Islamic State was branding houses with this letter as a threat to the Christian owners, the very same letter immediately also became a herald for Christians all over the world, a symbol brandished with pride testifying to the growing threat radical Islam has posed to Middle Eastern Christians. 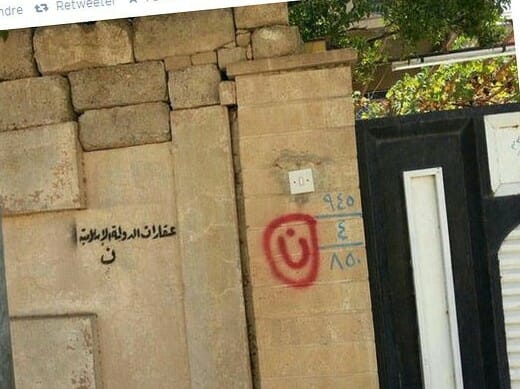 Spray-painted nun on the door of a Christian home.

This letter hides much more within it.  It is in fact a very powerful letter and its form is truly a “sign of the times”.   The letter Nūn in Arabic has the meaning of a whale or a great fish.  The word for fish in Arabic is Nūn.  In Hebrew, in Aramaic and Phoenician the letter Nūn is also related to a fish or a snake though indeed these two symbols are not so far from each other as one might think.  In Arabic, the Holy Prophet Jonah is called Dhun-Nūn. Of course we all know that the fish, the ΙΧΘΥΣ acrostic was one of the earliest symbols used by Christians to identify themselves. 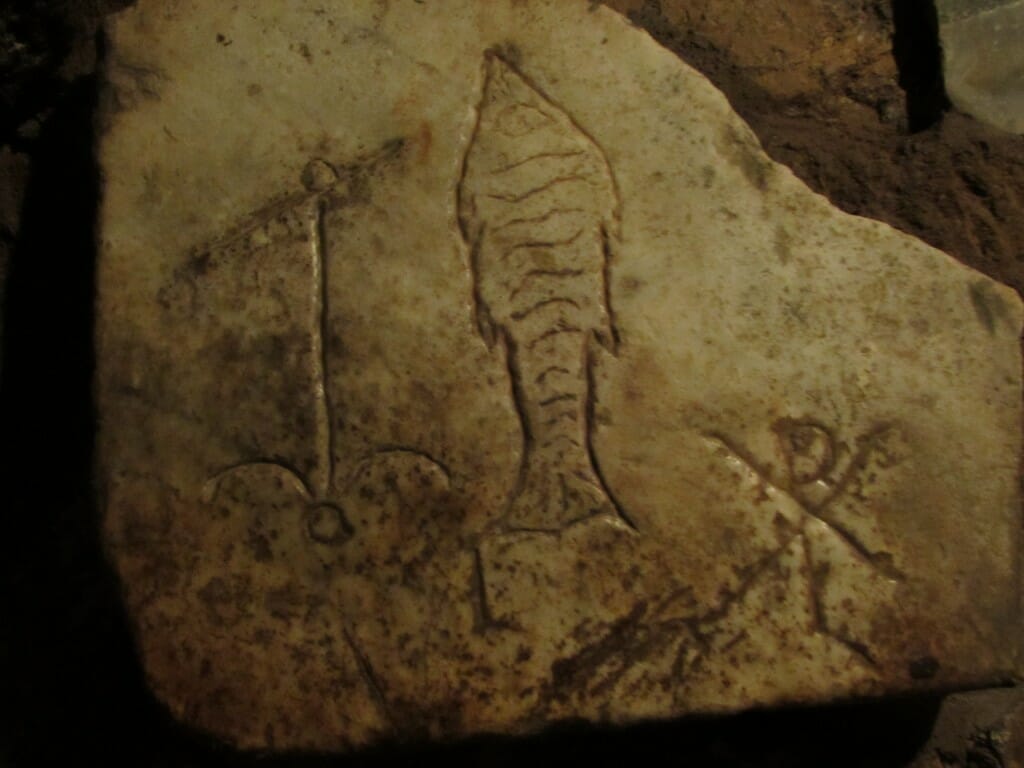 Fish with other symbols from the catacombs

But surprising as this relation might seem, there is in fact more to Nūn than this.  I have written many articles in the last two years on the notion of death, on the idea of a periphery, a shell that covers the hidden “spark”.  I have often showed that this has been represented by many images in Christianity: the tomb, the ark, the cave (den), animality, Jonah’s fish. 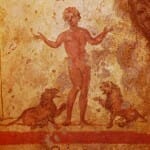 Daniel in the Lions’ Den from the catacombs 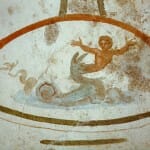 Jonah’s Fish from the catacombs 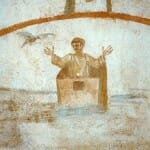 Noah’s Ark from the catacombs

The Arabic Nūn out of all the other versions of this letter in Semitic languages especially acts by its very shape like a distillation, like a geometric representation of death as I have so often dealt with.  Nūn is composed of an underlying half-circle with a point as its center.  It is that “ark” in which the point, that divine spark hides.  This might seem like a stretch to some, but it is in fact a very intuitive connection.  Only days after the Nūn appeared on social media, we began to see versions which had replaced the point by a cross. 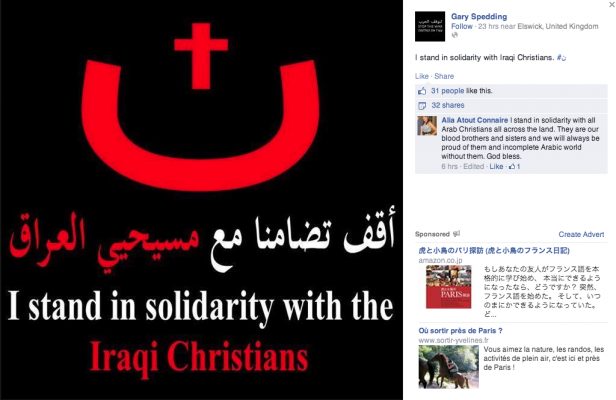 Early Christians knew very well the relationship between the fish and the symbolism I am alluding to here.  They also had a distilled version of the symbol of death surrounding the hidden point, a way of writing ICHTUS in an accrostic that created a circle with 8 raddii pointing to the center of the cross.  It seems therefore that this ancient symbol of a fish is revealing clearly some of its mysteries today. 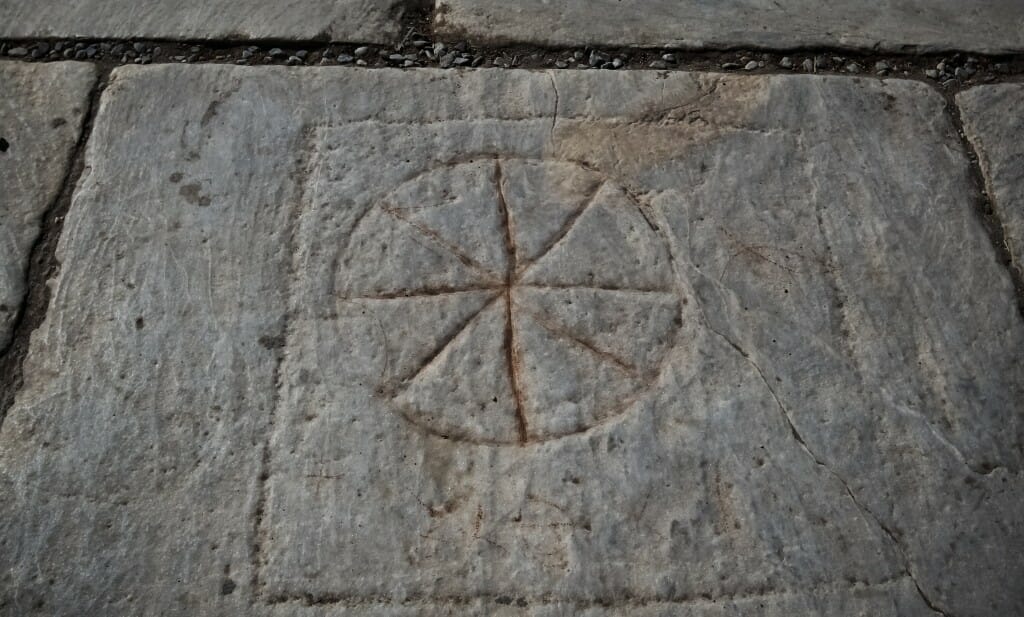 But I believe this very ancient symbolism in the current context, recently showing itself like a glaring vision in the form of the Arabic Nūn would best be written like this: 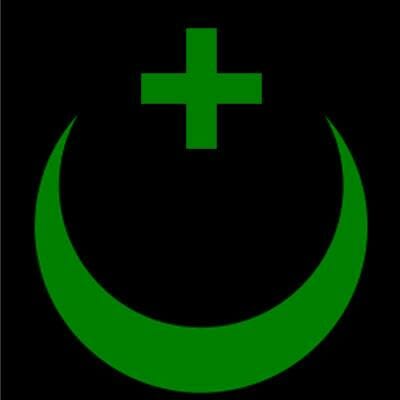 For the Islamic Crescent is a waning crescent, it is the last moon, the last sliver.  Islam says it is the “seal”, but one must not forget that the seal is the last thing.  It is what finishes, what closes up, what completely “fixes” the logos. This symbol has been used before in its reverse meaning by Tsar Ivan the Terrible. We can see it on late Russian Churches as a celebration of his victory in Kazan where he defeated the Ottoman.  Indeed Tsar Ivan though capturing a deep intuitive geometric relation of the point through the radii to the periphery, seemed not to have noticed the double aspect of this symbol.  Is the cross supplanting the crescent or is the crescent coming up to swallow the cross? Or is there a way for these two to coexist in a perfect balance, the seed and the shell, the Word and the Seal? 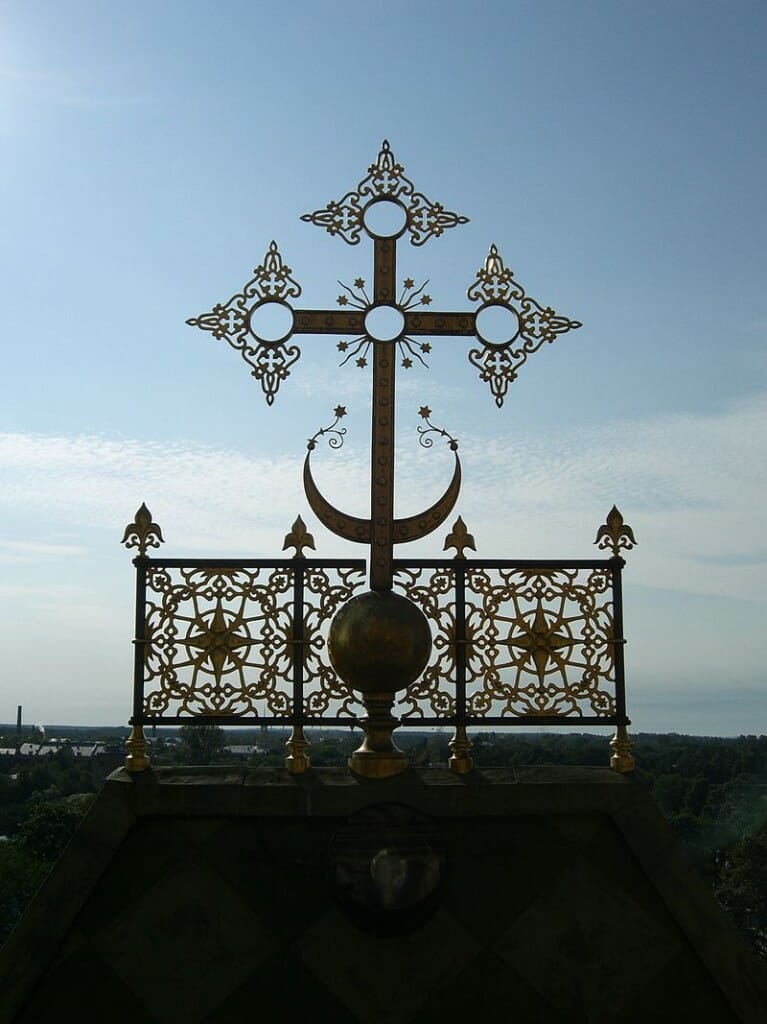 A few months ago, I made an icon of the Holy Prophet Jonah and wrote an article about his story.  A few weeks ago, the Islamic State destroyed the tomb of the prophet Jonah, the Dhun-Nūn in the ancient city of Nineveh.  In destroying the Mosque that contained the tomb, the militants also revealed what was hidden under it, the remains of the ancient church covered up in the 14th century, like a prophet hiding in a whale.  And so we must keep our eyes open to the symbolism which is there in the very shape of our world, the very language of history, a history in which we must pray that we may see through the horror, through the brutality and the veil of tears into the light of the resurrection.  I leave you therefore with the icon of Jonah as well as with his prayer, which is today the prayer of Syrian Christians:

Then Jonah prayed unto the LORD his God out of the fish’s belly,

And said,” I cried by reason of mine affliction unto the LORD, and he heard me; out of the belly of death cried I, and thou heardest my voice.
For thou hadst cast me into the deep, in the midst of the seas; and the floods compassed me about: all thy billows and thy waves passed over me.
Then I said, I am cast out of thy sight; yet I will look again toward thy holy temple.
The waters compassed me about, even to the soul: the depth closed me round about, the weeds were wrapped about my head.
I went down to the bottoms of the mountains; the earth with her bars was about me for ever: yet hast thou brought up my life from corruption, O LORD my God.
When my soul fainted within me I remembered the LORD: and my prayer came in unto thee, into thine holy temple.
They that observe lying vanities forsake their own mercy.
But I will sacrifice unto thee with the voice of thanksgiving; I will pay that that I have vowed. Salvation is of the LORD.”

And the LORD spake unto the fish, and it vomited out Jonah upon the dry land. 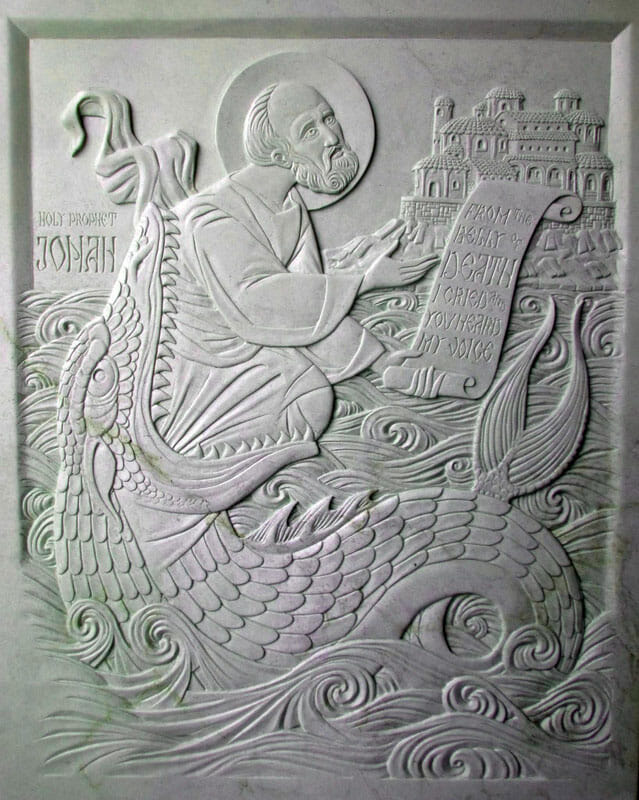