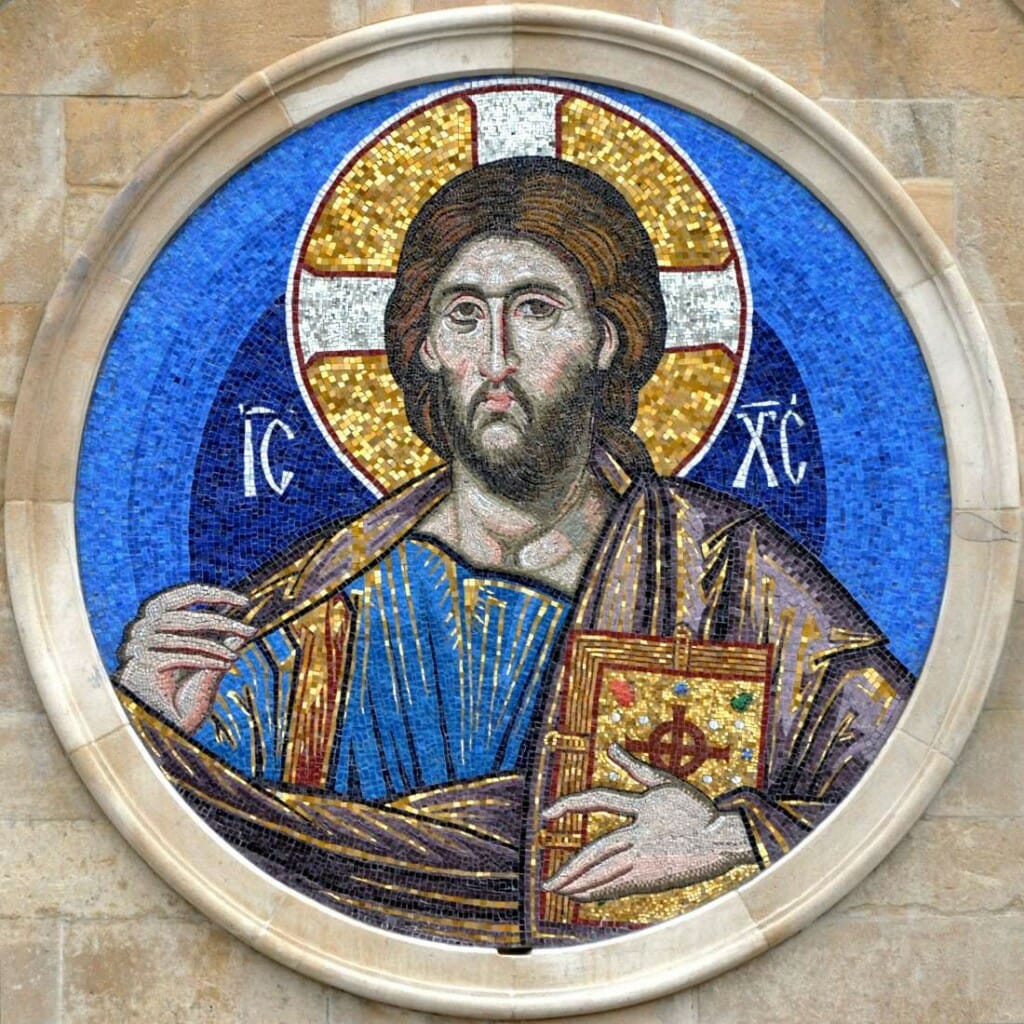 Having studied mosaics all over the world for many years I was delighted to receive a commission last year to create a mosaic for a church in Wales. I completed the illustrated mosaic of Christ Pantocrator in March this year. It is sited on the exterior wall of St Martin’s Church of Wales in Roath, Cardiff and measures 1.4 metres (4.6 feet) in diameter. 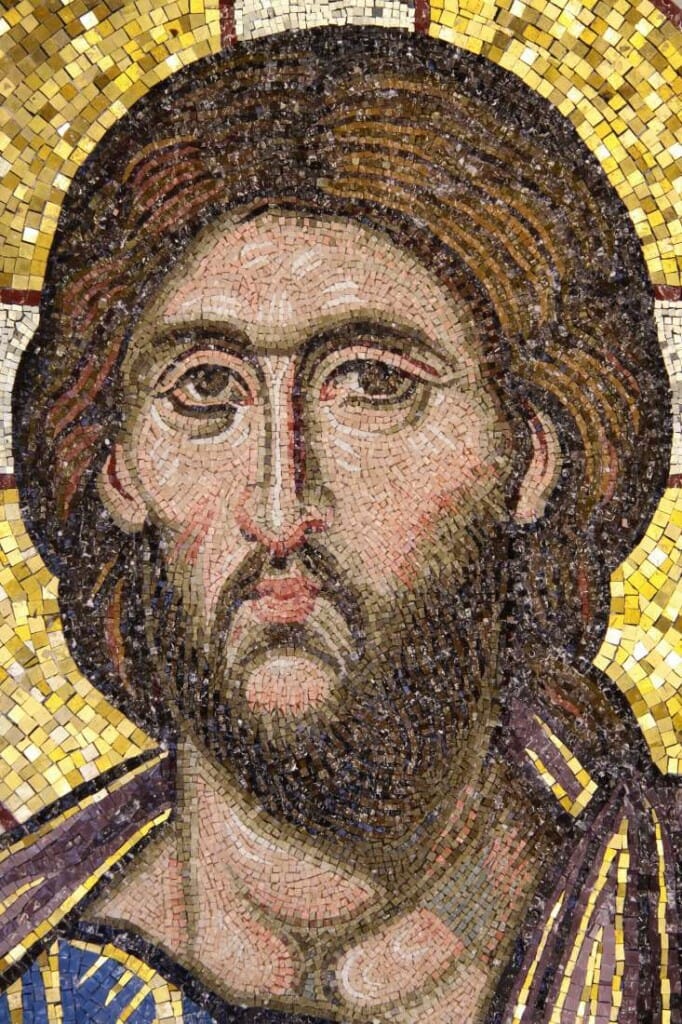 As this was the first mosaic I have made, I simply copied the mosaic face of Christ found in the south gallery in Hagia Sophia, Constantinople. The rest was adapted from a mosaic in the Sancta Sanctorum in Rome. In this article I will outline the technique used in its making, and then describe the chief characteristics of traditional old mosaics, many of which seem to be missing in much modern work.

I used the method I learned at the Mosaic Art School in Ravenna, Italy, where I took a five day course. This course is to be highly recommended for anyone wanting to learn mosaic!  http://www.sira.it/mosaic/courses.htm

The direct transfer (or “Ravenna”) technique

Put briefly, the technique used to make the Roath mosaic was as follows:

Advantages of the direct transfer technique

The advantages of this direct transfer method are chiefly that: (a) the work is executed in the positive but in the leisure of one’s studio rather than on site; (b) unlike direct laying on the wall, the temporary putty setting bed allows adjustments over a long period of time; (c) unlike the inverse method it permits the angling of individual tesserae since the glue impregnated cloth holds the tesserae not just in their place but also at their original angles. This preserves all the liveliness and undulations of the original setting and which one finds in all the great works of the past, which were laid directly onto the walls. 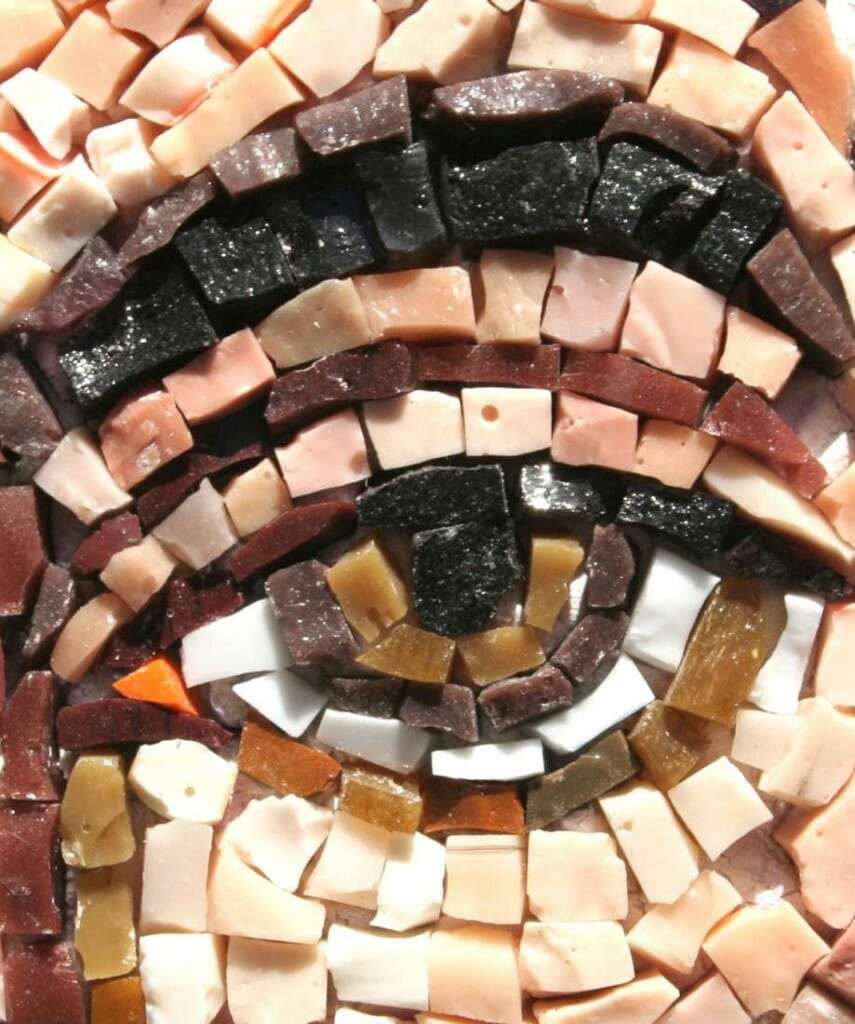 Detail of a mosaic showing the angled tesserae

This variation in setting angles is in marked contrast to the more commonly used inverse method, which leaves the surface entirely flat. In that method the tesserae are temporarily glued face down onto paper or cloth laid on a flat surface, and then this is glued back-side to the wall and the paper or cloth removed. This technique means that not only does the mosaicist have to work in reverse but, more importantly, the final surface is flat. While such flatness is desirable for floors and tables, it leaves a somewhat lifeless surface when used on walls.

While the Ravenna technique is undoubtedly the best method for work executed in the studio, if whole walls are to be covered it is ideal to bed the tesserae directly onto the plastered wall on site. In this way the tesserae can be more accurately adjusted for the particular light and viewing conditions of each area in the church – something especially important for the gold.

My observation of old mosaic masterpieces and my albeit limited experience in making this mosaic have shown me a number of principles behind the success of the great mosaics of the past. Most of these can be summarized in the words of Archimandrite Vasileios of Iviron once shared with me: “There is an imperfect perfection and a perfect imperfection.”