When Andrew Gould launched the Orthodox Arts Journal (OAJ) in June of 2012, he had in mind the clearinghouse model it has become. It is a service that informs and engages readers in helping to create a culture that values quality Orthodox arts. It is hoped by this effort that a market will emerge to support talented ecclesial artists and artisans to adorn our churches and our homes.

In the meantime OAJ connects artists with other artists and with patrons. And sometimes, as in the following case, patrons connect artists with artists.

In February 2012 Hexaemeron, an affiliate member organization, received this message from a theology student with a growing family and a love of sacred images.

I am looking to commission an icon for my family prayer room.
The image I am interested in is St. Michael the Archangel like
the 15th century Andreas Ritzos I have attached. It would be
the only hand-written icon we have, and it will hold a primary
place in our home as I am placing my family under his patronage.
Is this possible?

In His Name,
Rob Ingram 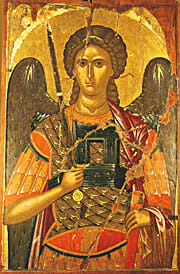 Requests for work of this kind come through our channels regularly. Iconographer Anna Gouriev fulfills them in a timely manner and we may never hear from the patron again. But in September 2012 this one circled back serendipitously.

I would like to commission a carving of St. Michael after the model
of the icon I commissioned from Anna Gouriev several months ago.
We just received this beautiful icon, and it is currently in our family
prayer room. I appreciate and follow your work as well as those
affiliated with the Orthodox Art Journal. Thank you and God bless.

In His Name,
Rob Ingram

Besides having busy commission schedules Anna Gouriev and Jonathan Pageau are teachers of their art. Anna and her celebrated mother Ksenia Pokrovsky have been teaching courses in iconography for Hexaemeron for the past ten years. Jonathan will offer his first course in icon carving for Hexaemeron October 13-19, 2013. It is in Maggie Valley, North Carolina that the two will meet in a shared initiative to raise the standard for traditional Orthodox arts on the North American continent. Anna, formerly of Moscow, lives in the Boston area and Jonathan in Montreal.

But the art of Andreas Ritzos has already brought Anna and Jonathan together.

Andreas Ritzos (1422–1492)
Andreas Ritzos was born in the city of Iraklion, the capital of Crete built on the ancient ruins of Knossus, the site of King Minos’ palace. Crete had been a part of the Byzantine Empire since late Roman antiquity. Except for the interval of Muslim conquest from Spain (820 to 961), Byzantine rule of Crete lasted until 1210. After Constantinople was dealt a paralyzing blow by Western Europe in the Fourth Crusade (1204), the East Roman territories were divided among the crusader leaders. The Republic of Venetia took possession of Crete in 1210.

The Byzantium diaspora of scholars and artists began well before the final collapse of Constantinople in 1453 as icon painters, mosaicists, carvers, metalsmiths and other artisans sought refuge outside the capital city increasingly under siege by the Ottoman Turks. Known as the Kingdom of Candia, Crete flourished as a new center of icon painting from the 15th to the 17th century until the Turks finally conquered the island in 1669.

Master icon painters of the Cretan school such as Angelos Acatantos, his disciple Andreas Ritzos and son Nikolaos Ritzos, and Nicolaos Tzafouris established a distinctive style combining classical Byzantine iconography of the late Palaiologan period with elements of the nascent Italian Renaissance. Nourished by both, the Cretan school harmoniously integrated lighting techniques of modeling and chiaroscuro with depthless perspective and static pose characteristic of Byzantine icon painting. The icons produced in the Ritzos atelier were in demand throughout Europe by way of the Venetian market, as well as in the monasteries of mainland Greece and the Ionian isles.

Results for Robert Ingram
Iconography practiced and taught in the traditional manner has often been disparaged as mere copy art. Copying, however, is mechanical. It neither does justice to the original nor inspires by repetition. In accepting Robert Ingram’s commission, Anna cautioned, “It will not look exactly like the image you sent. It will be a close relative, a descendant of Ritzos, his great-grandchild perhaps.”

The daughter of renowned Russian icon painter Ksenia Pokrovsky, Anna received her iconography education from the cradle, and not metaphorically. Ksenia rocked her children with one foot on the run-bow while she painted hands free. Anna honed her skills in the clandestine atelier of Moscow’s underground network of icon painters for whom it was a crime to practice the ancient art. The same sentence was in force for those who painted “new icons” as for those who trafficked in firearms, pornography and narcotics. Anna has achieved mastery of the finest classical prototypes and she mothers them to new majesty.

Can anyone look honestly at Anna’s St. Michael and call it a copy?

“I was nervous when the icon arrived,” says Robert, “because I did not know how it would come out. But when I saw it, I was ecstatic.” 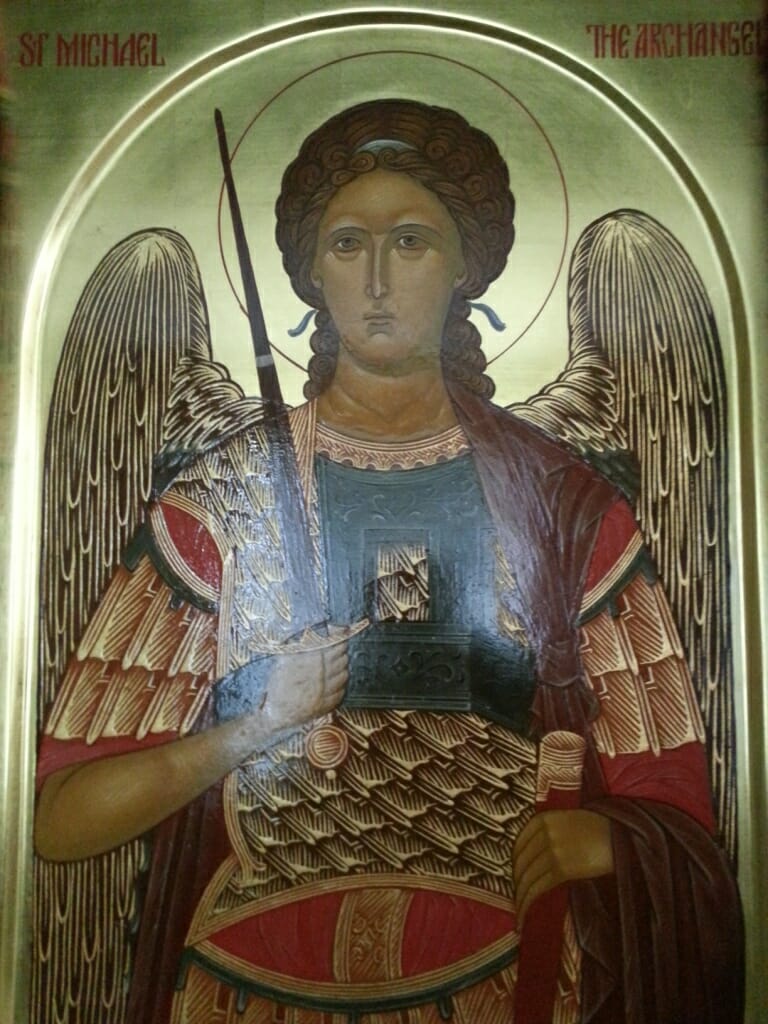 Holy St. Michael the Archangel by Anna Gouriev (egg-tempera) from the prototype of Andreas Ritzos

Those who follow OAJ, as Robert Ingram does, have become familiar with Jonathan Pageau’s articles on numerous ecclesial art subjects. But his icons carved in both wood and stone astonish everyone who sees them.

Robert convinced his wife to buy a Pageau carving for his graduation present. “Jonathan’s work is amazing. I cannot believe he can put so much detail into such a small space.”

“I was drawn to this particular image of St. Michael because it displays a calm, courageous countenance, and his sword is drawn ready to strike. I always wear it, even under my soft body armor at work.”

Robert, who has worked in law enforcement for 14 years, holds a bachelors degree in Philosophy from Franciscan University of Steubenville, and recently completed an MA in Theology with a concentration in Bioethics from Holy Apostles College and Seminary 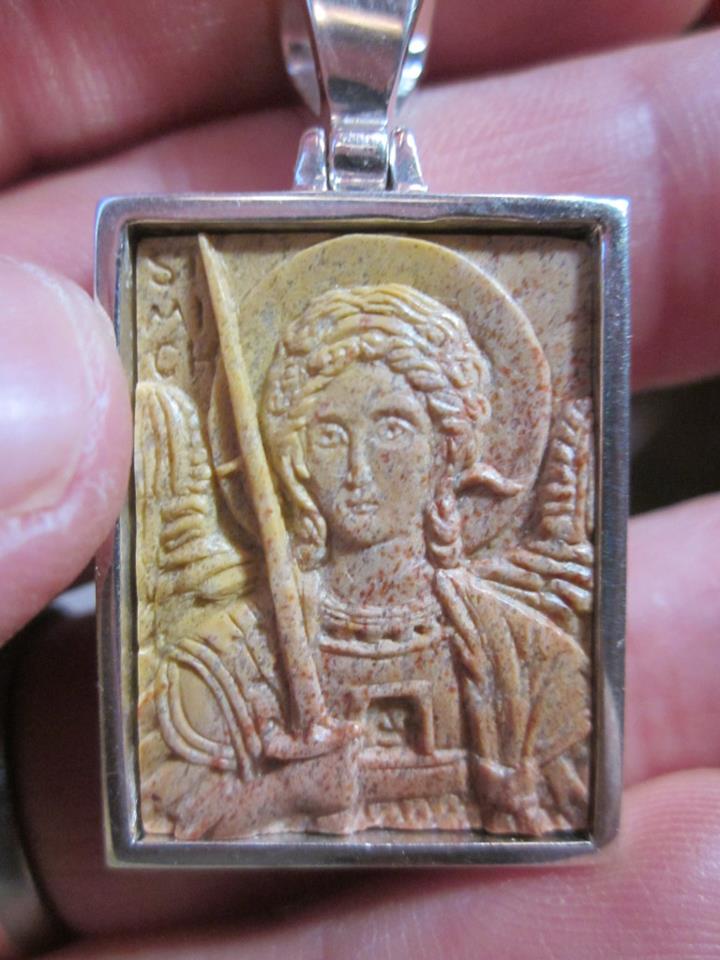 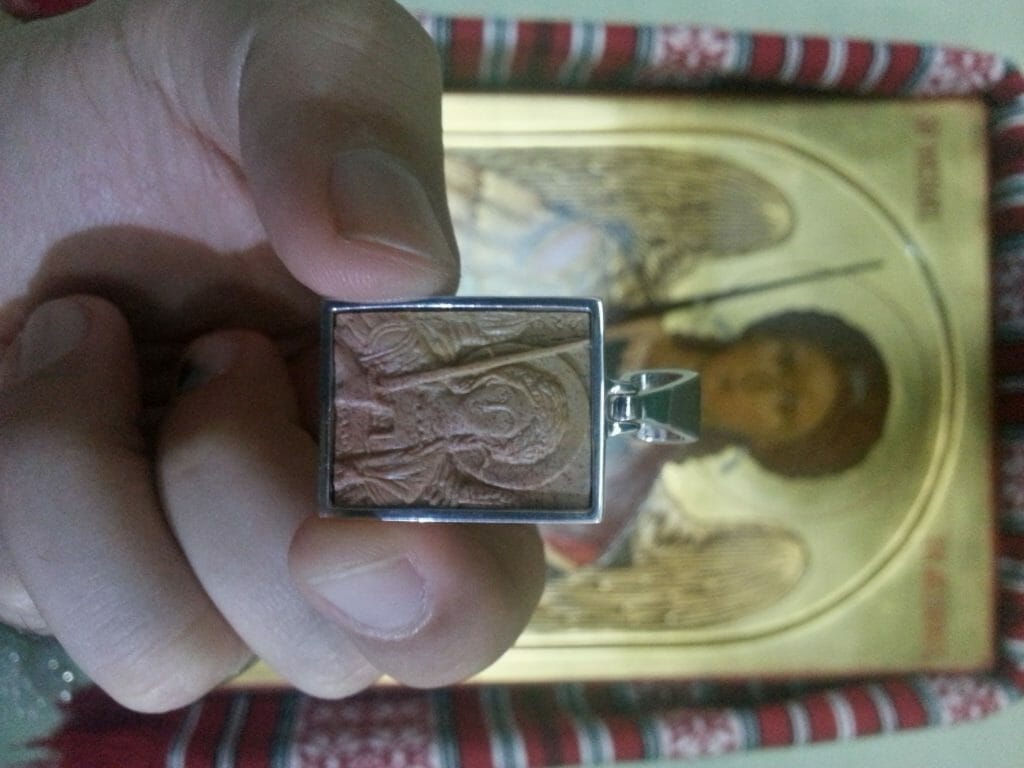 Holy St. Michael the Archangel pendant by Jonathan Pageau in the foreground aligned with the icon painted by Anna Gouriev in the background.

Andrew Gould originally contacted Jonathan to commission a Gospel cover that Andrew designed. Recognizing his many talents, Andrew garnered Jonathan’s services as one of OAJ’s editors.

“While there are several very qualified icon painters residing in the USA”, says Andrew, “I can say with certainty that there is no one in our country who could be called a master of Byzantine icon carving. The art of carving low-relief icons is somewhat obscure worldwide, and only in Russia and Georgia are there any significant concentrations of artists working in that field. Jonathan Pageau, as a Canadian, is unique in having mastered Byzantine icon carving in isolation. He is a very talented sculptor indeed, and through years of individual study and practice he has achieved a level of competence that equals if not surpasses anyone you could find globally.”

Icon carving is barely represented in churches of the Americas though it has been a vibrant part of the Orthodox tradition from the earliest sarcophagi to lavish ivory miniatures to the austere Russian low reliefs. It is Jonathan’s desire to not only share his art but to also train others to master it.

The course Jonathan is offering in Maggie Valley in October has five seats still available. No prior experience in carving is required. See Hexaemeron.org for details. 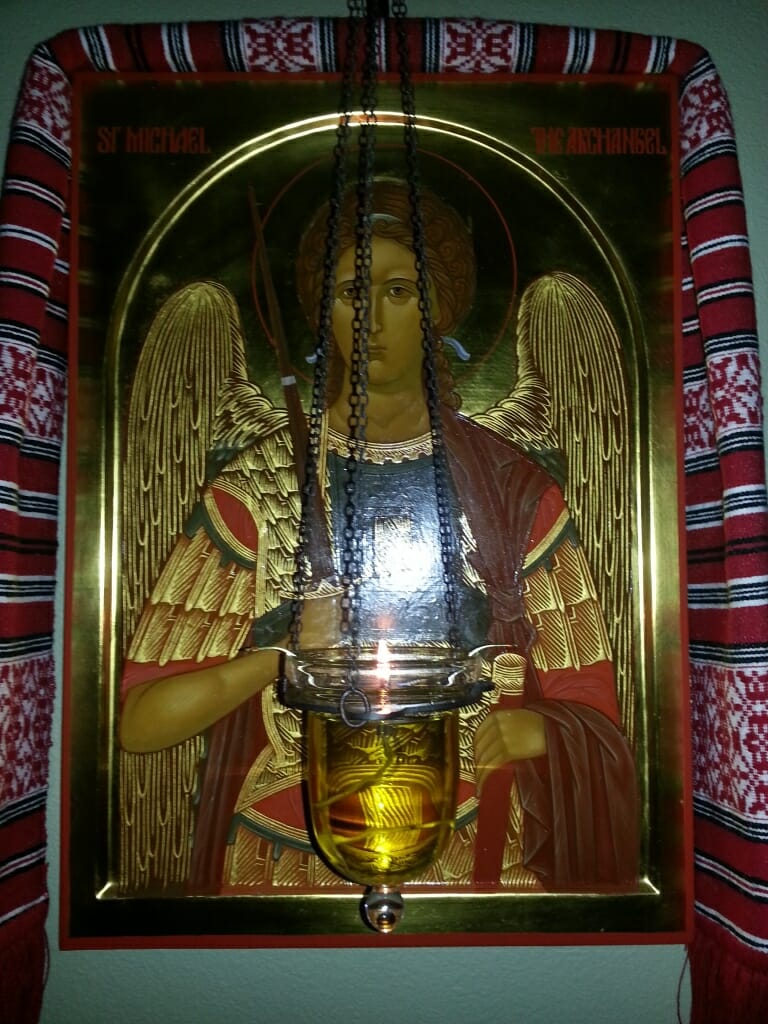 X5 Lampada and icon of Holy St. Michael the Archangel

The icon Robert commission from Anna is reverently housed in an area set aside in his home for prayer. Before the icon hangs a vigil lamp acquired from New World Byzantine Studios, a church supply company created by Andrew Gould. “I find it providential that all these artists came together in a collaborative work that has found its place under my roof,” says Robert.

“I had researched the careers of Anna and Jonathan separately and to my surprise they were affiliated with one another through the Orthodox Arts Journal and New World Byzantine Studios. I was overjoyed when the Journal came into existence. The publication not only provides great articles but also has created a central hub for talented.”

In little more than a year the fruit of a dream has begun to appear.