May 29, 2020Murals for the Burning Bush Chapel and Prothesis at St John of the Ladder in Greenville, South Carolina

Narthex Murals at St John of the Ladder 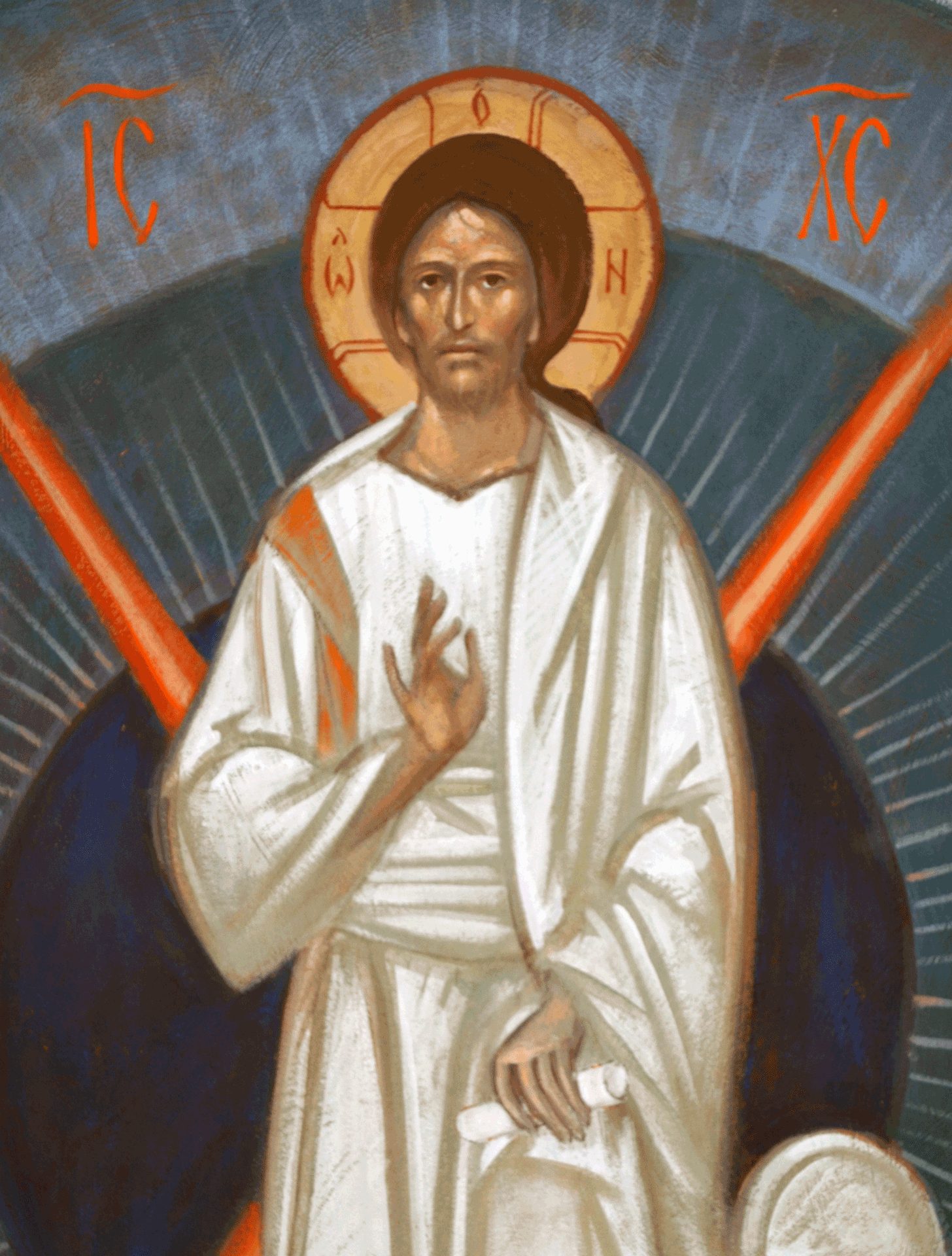 This article is the second in a series documenting the mural project at St John of the Ladder Orthodox Church in Greenville, South Carolina. This beautiful temple was designed by Andrew Gould. The previous article presented the murals in the two smaller rooms adjacent to the church’s sanctuary. Here, I will present the recently completed murals in the narthex. 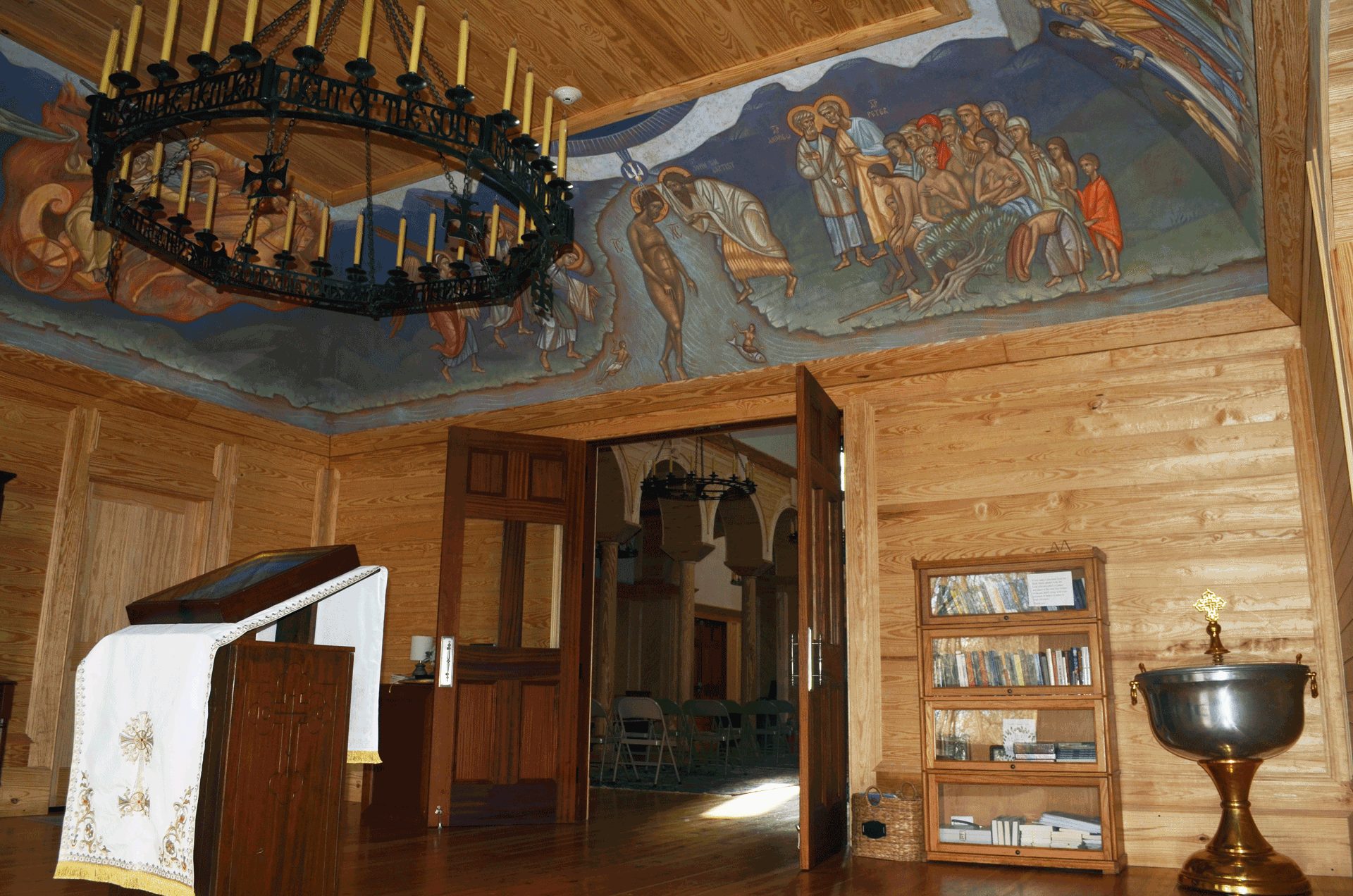 View of the narthex at St John of the Ladder, showing the doorway into the nave.

The narthex is a foyer on the western end of the church. It acts as a transitional space between the outside and the main worship space. On the most basic level, this space allows us to ‘land’ in the building. Our eyes adjust, families regroup, we remove coats and hats, buy candles to light in the church, and so on. The lighting is generally dimmer here, and people quiet down and gain focus before entering the nave. 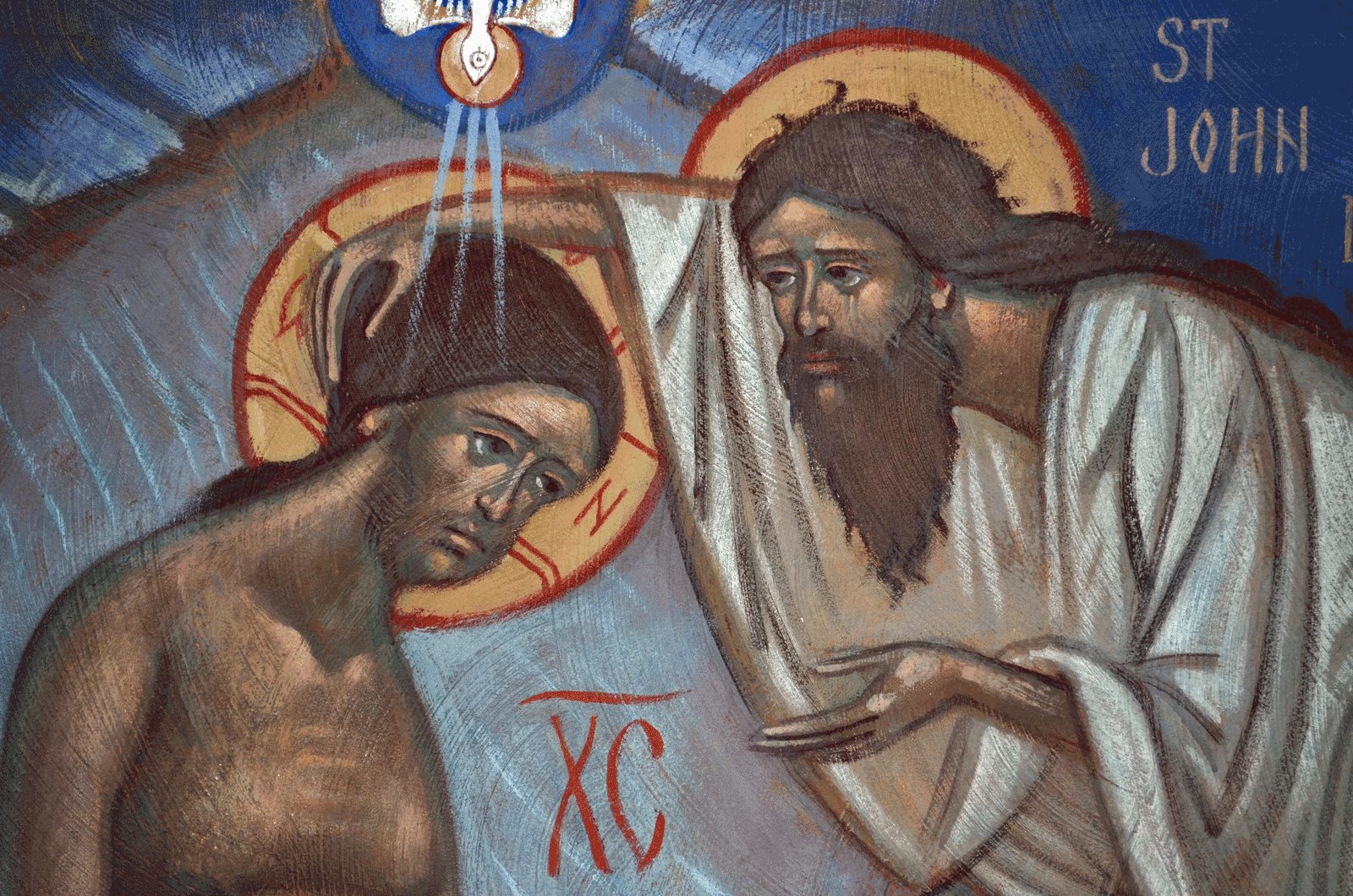 Detail of Christ and St John the Baptist

Spiritually the narthex marks the passage from the chaos of worldly cares inward towards the kingdom of God.

All of this informs the subject matter of narthex iconography, which carries themes of transitions, preparation, and purification. Now we will look at how these themes work in the narthex at St John of the Ladder.

Mural of the Lord’s Theophany on the east wall of the narthex.

For the narthex at St John of the Ladder, we chose the theme of Baptism to guide the mural program. Baptism is the sacramental action by which those outside enter the church. In a sense, we reenact this each time we enter the church building for worship.

We chose the icon of Theophany to go on the east wall, directly above the doorway into the nave. This is the first mural to meet your eyes upon entering the building, and it beckons you forward. Christ’s descent into the water directly interprets our act of entrance. His figure exemplifies this act. His nakedness indicates purification from any baggage, and signifies death to the old, worldly way of life and rebirth to the new, heavenly life. He shows volition as he strides towards John the Baptist, and submission as he bows his head. His hand blesses the water, and those who with him pass underneath. 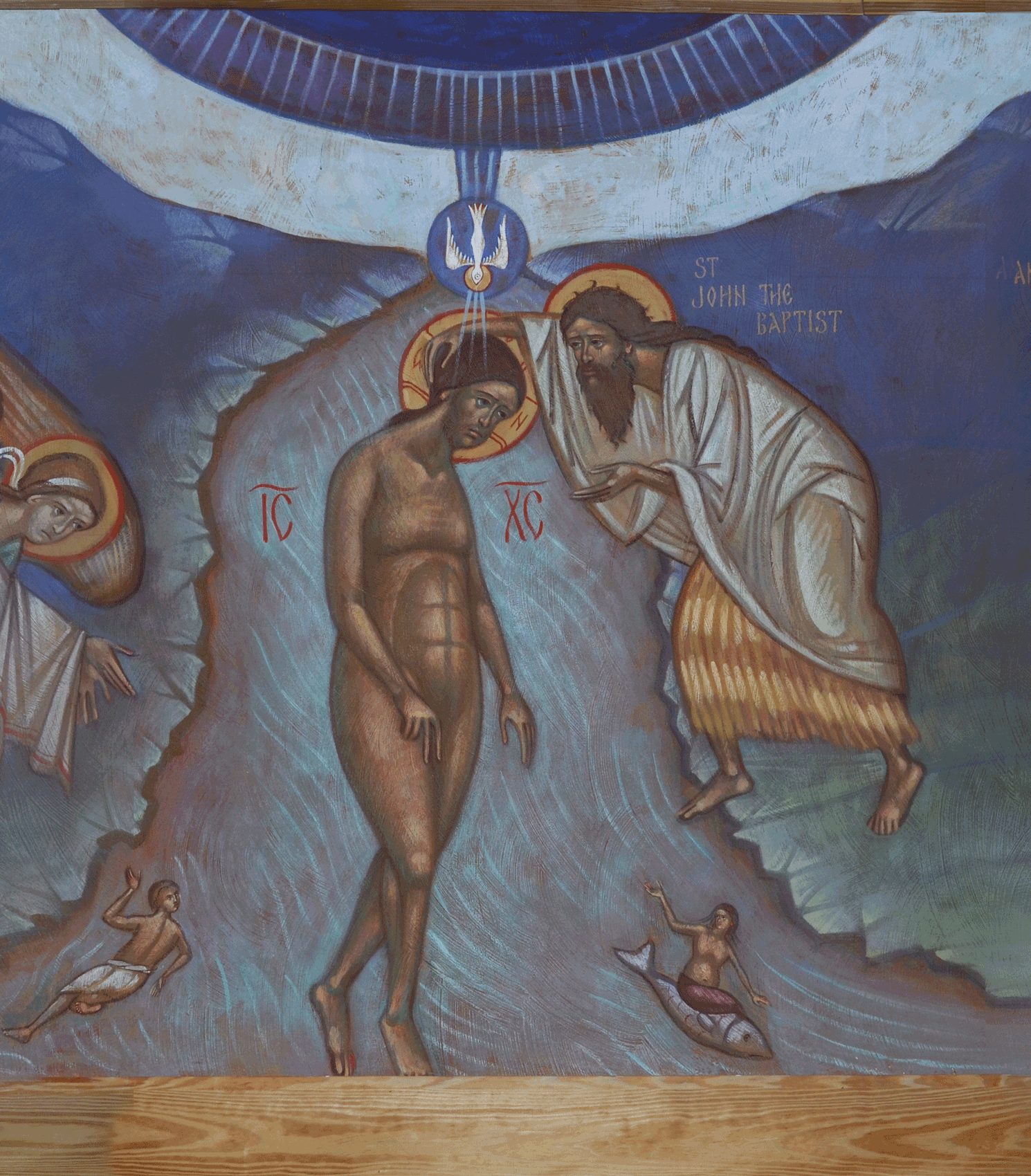 The depiction of Theophany is closely based on the Gospel text. The semicircular ‘glory’ at the top indicates the presence of the Father. The Holy Spirit in the form of a dove hovers over Jesus’ head. This image of the Spirit hovering over the water resonates both with the Genesis creation story (Genesis 1: 2), and the dove from the story of Noah (Genesis 8: 6-12). It is an image of God initiating a new beginning.

St John the Baptist’s figure also shows us the way as we enter. He is reluctant to approach because of his unworthiness. But, in obedience to Jesus’ call, he comes forward to participate in God’s plan. We follow his example as we approach the sacred space, and especially as we approach the chalice for Communion.

On one side, a group of angels attends the Baptism. The Theophany service texts frequently speak of their presence. On the other side, a group of people prepares for Baptism by John in the Jordan. They look on as they remove shoes and garments in preparation. This scene occasionally appears in Theophany icons, especially where the composition is strongly horizontal. 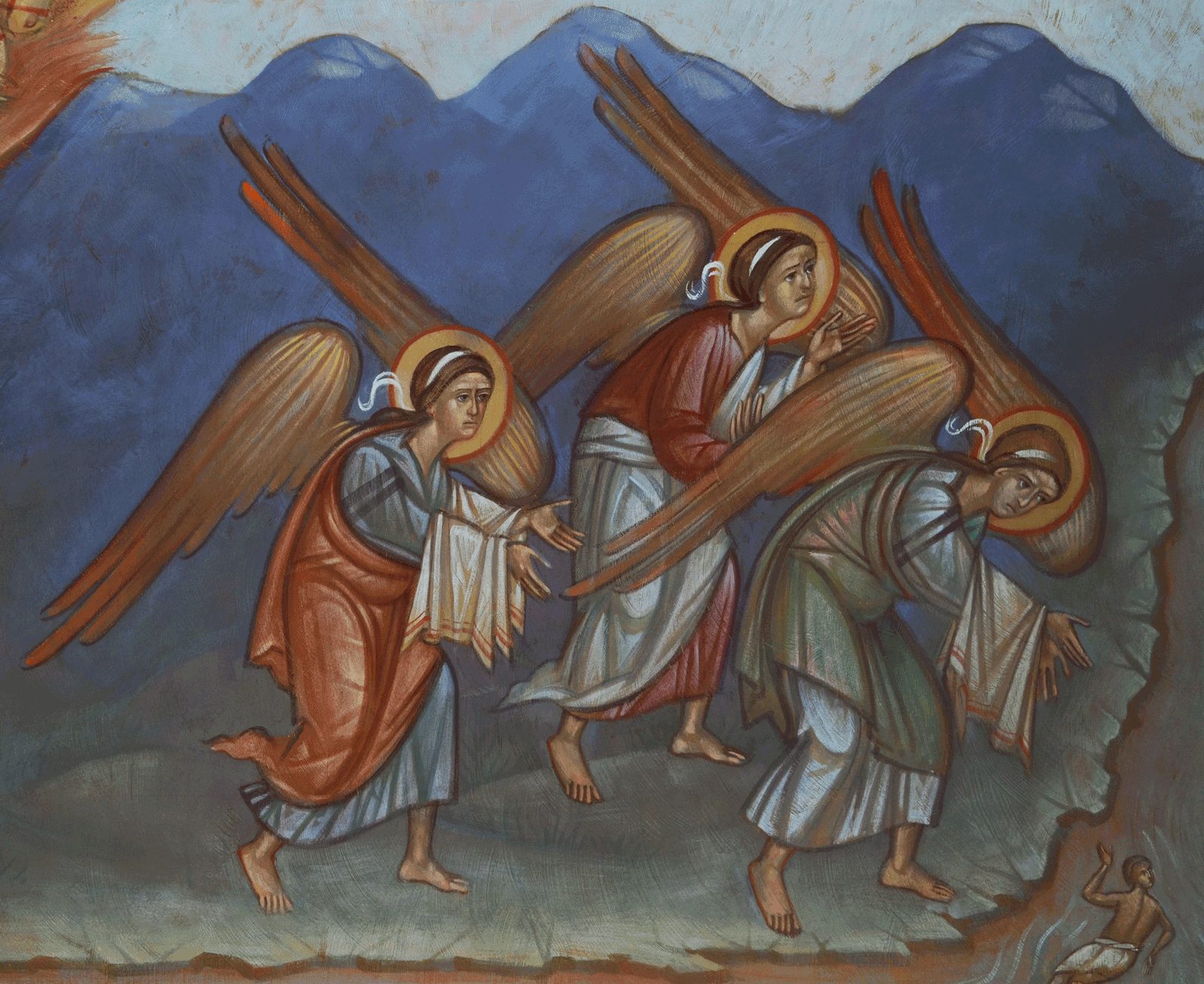 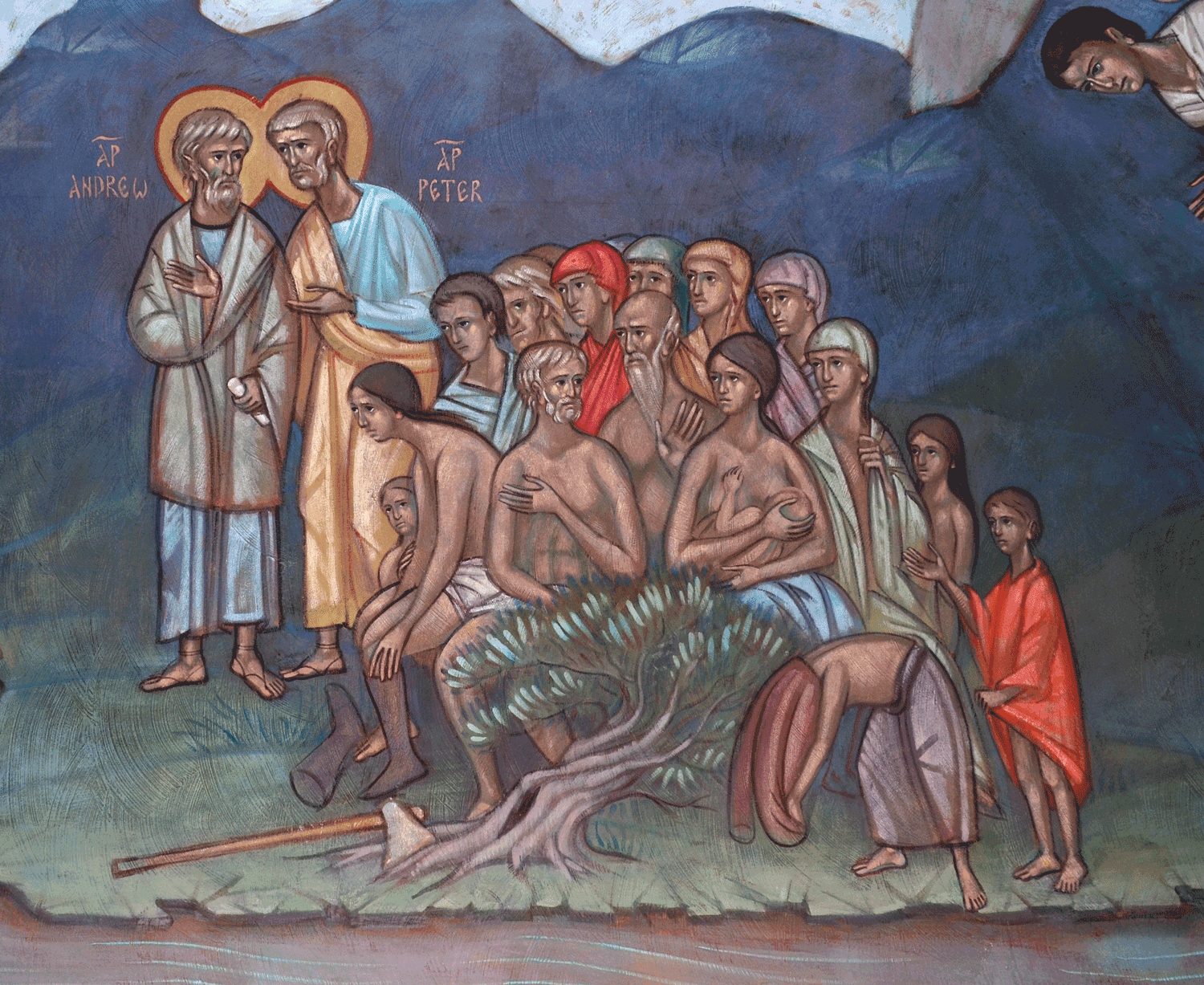 Group of people preparing for Baptism. Apostles Andrew and Peter appear also, as described in the Gospel.

Finally, two small figures appear by Jesus’ feet. A quote from Ouspensky’s The Meaning of Icons explains their presence:

These details illustrate the Old Testament texts, which enter into the divine service of the festival, and are a prophetic prefiguration of Baptism. “The sea saw and fled: Jordan turned back” (PS.cxiii, 3). The male figure—an allegory of Jordan—is explained by the following text: “Elisha turned back the river Jordan with the mantle, when Elijah had been taken up, and the waters were divided hither and thither; and the bed of the river was to Elisha a dry pathway, as a true type of Baptism, by which we pass through the changing course of life.” The female figure is an allegory of the sea and refers to the other prefiguration of Baptism‑the crossing of the Red Sea by the Jews. 1

The North and South Walls 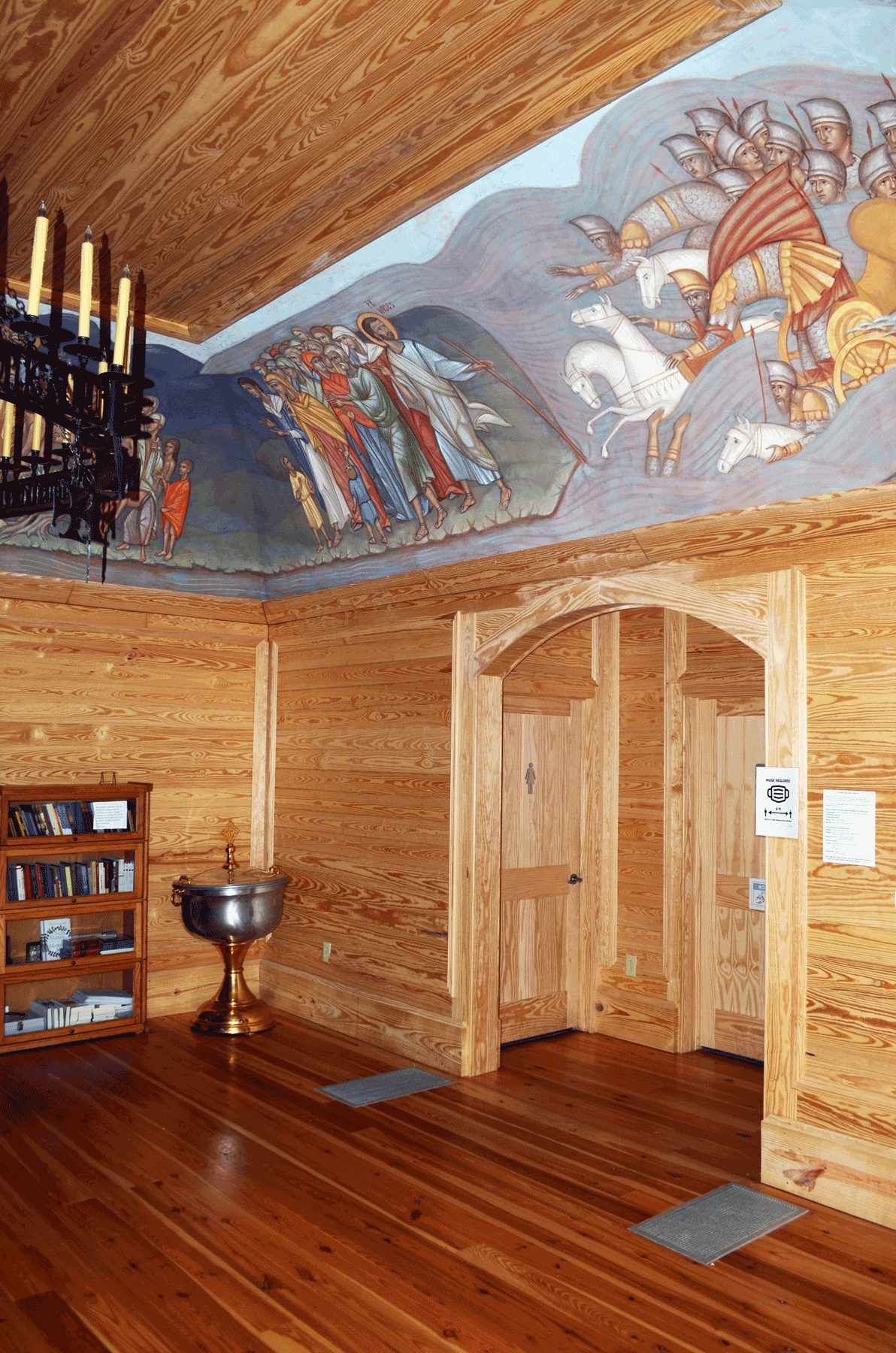 View of the south wall of the narthex.

The two scenes indicated by Ouspensky’s quote here adorn the two side walls of the narthex, north and south. On the north wall, Elijah and Elisha cross the Jordan river, and Elijah goes up in the fiery chariot. On the south wall, Moses leads the Israelites through the Red Sea, as Pharaoh and his men are deluged. The water in each scene continues into the Jordan in the Theophany mural.

We found these two scenes to have wonderful potential as parallel images. Both involve chariots and horses; here ascending in fire, there descending in water. Each scene has a strong forward motion, as is appropriate for north and south walls. This motion resonates with our eastward movement into the worship space.

Moses leading the Israelites through the Red Sea, on the south wall of the narthex.

Elijah ascending in the fiery chariot on the north wall.

In the middle of each scene, the main character moves forward, towards east. However, each looks back towards the center of action, and towards us, leading the way forward with their hand. The very center of each composition shows an action of transition. Elijah passes his mantle to Elisha, passing on his ministry. Likewise, Moses strikes the sea with his staff to part the water, making a way through. 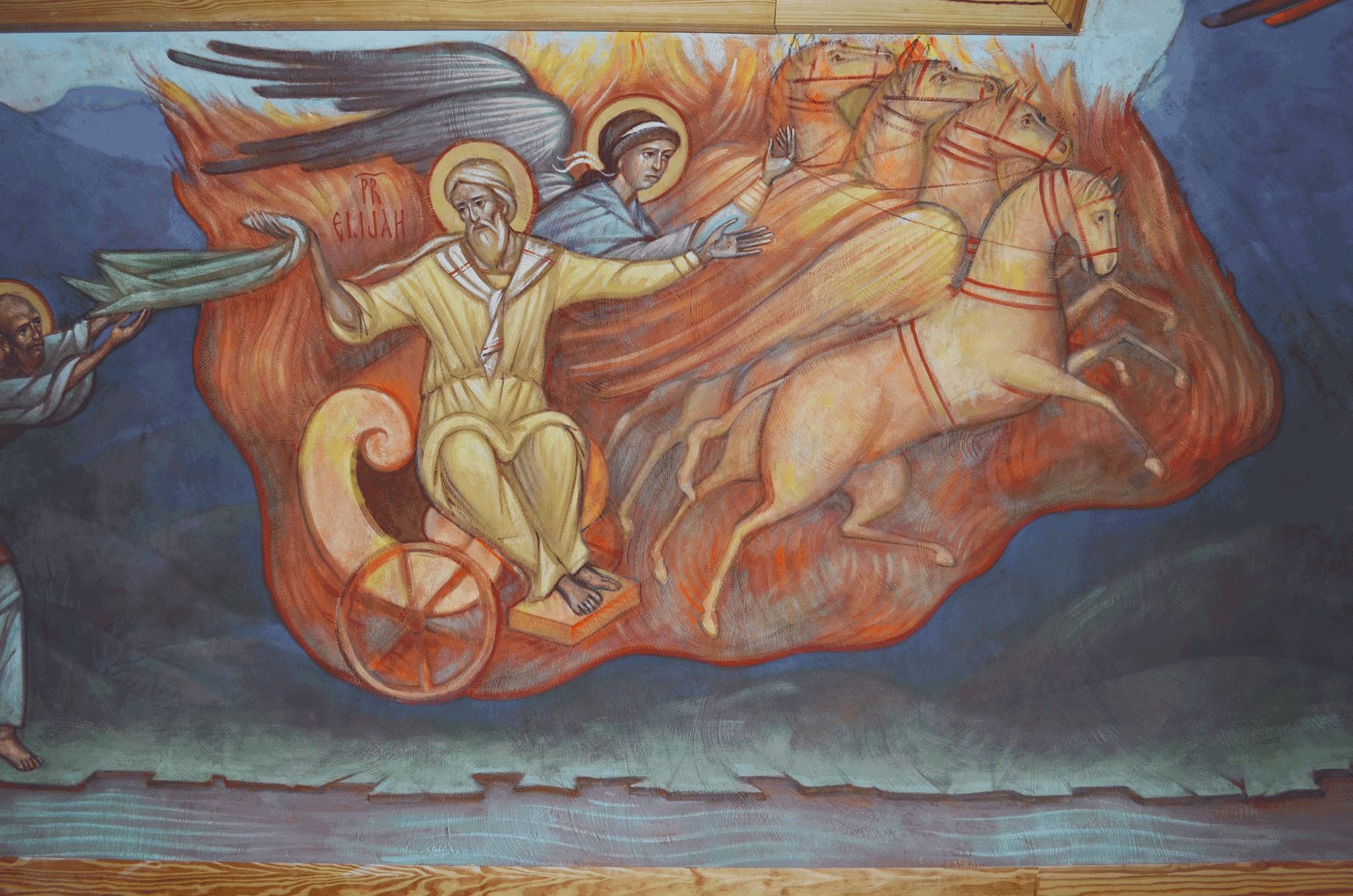 Detail of Elijah in the fiery chariot. 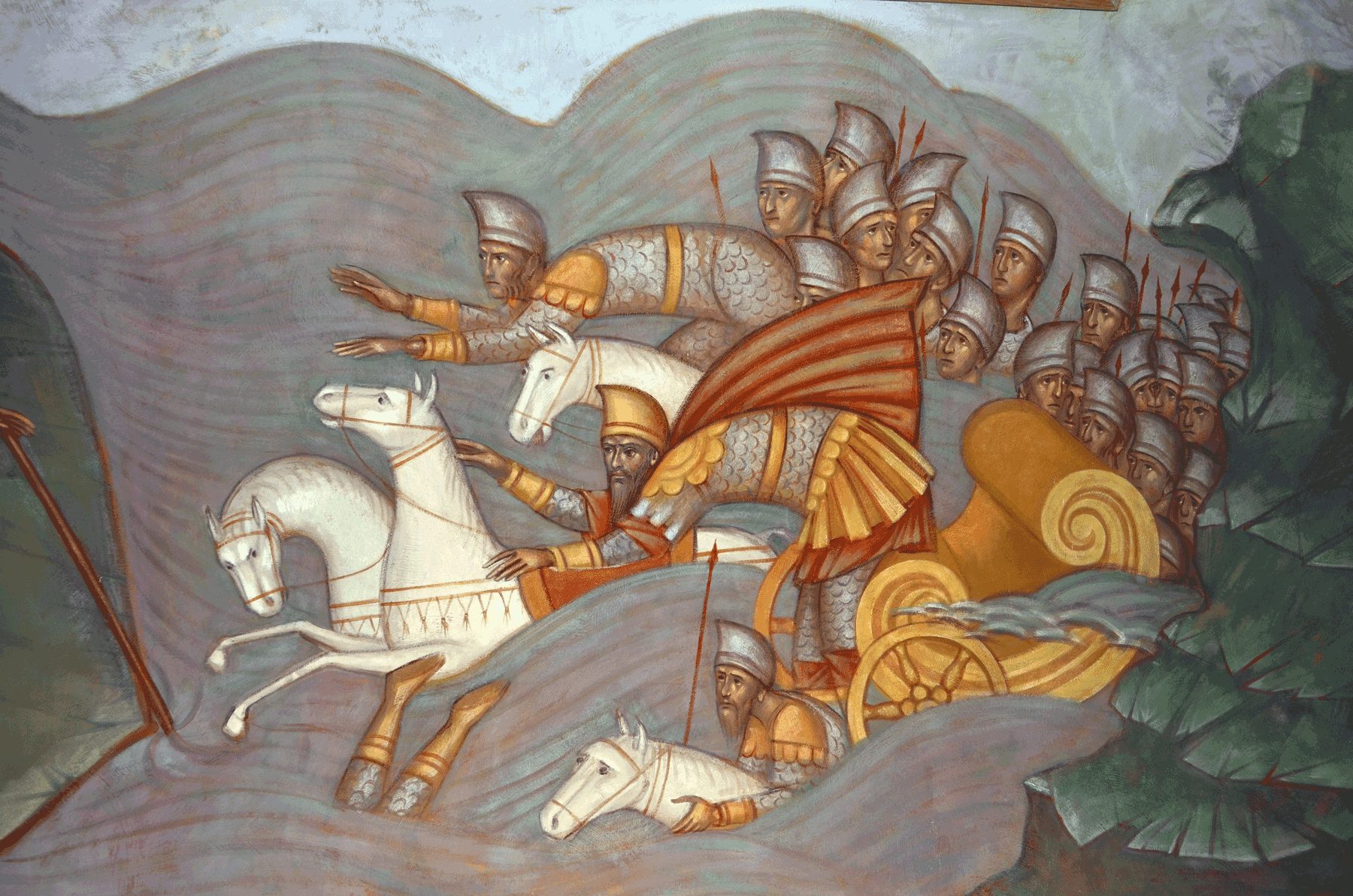 Pharaoh and his hosts being overwhelmed by the billows of the Sea.

The Transfiguration of the Lord, on the west wall of the narthex.

In general, west-facing iconography in a church relates to the act of departing from the liturgical space. Dismissal and departure are key dynamics in liturgical services, and the iconography we encounter as we leave guides and interprets this action.

We chose the Lord’s Transfiguration for the west wall of the narthex, directly above the doorway leading to the outside. The Transfiguration is unusual for a west wall, but it works surprisingly well in this program. 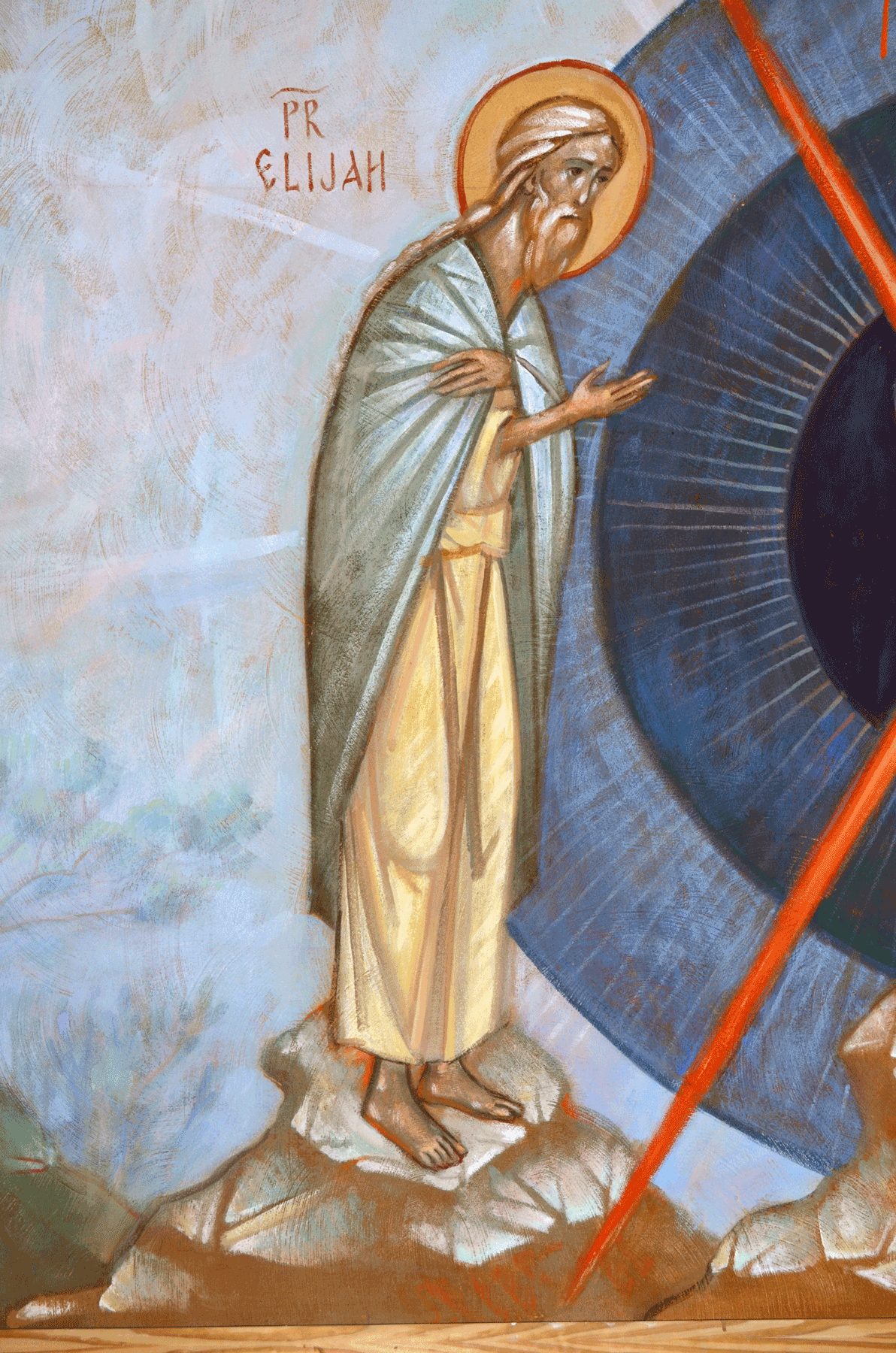 The Prophet Elijah at the Transfiguration

These are two of the great revelations of Christ’s identity, which prefigure the fulfillment of his work. In the Theophany we see Christ as naked, submitting himself to Baptism. He thus reveals himself as the one who would submit to death on the Cross. And in the Transfiguration we see the Christ who would rise from the dead. His death is revealed as voluntary as he is clothed in glorious light. Juxtaposing these two scenes brings out the resonance of Theophany with the baptisms that will take place in the narthex. After submersion in the water, we clothe the baptized in white robes. 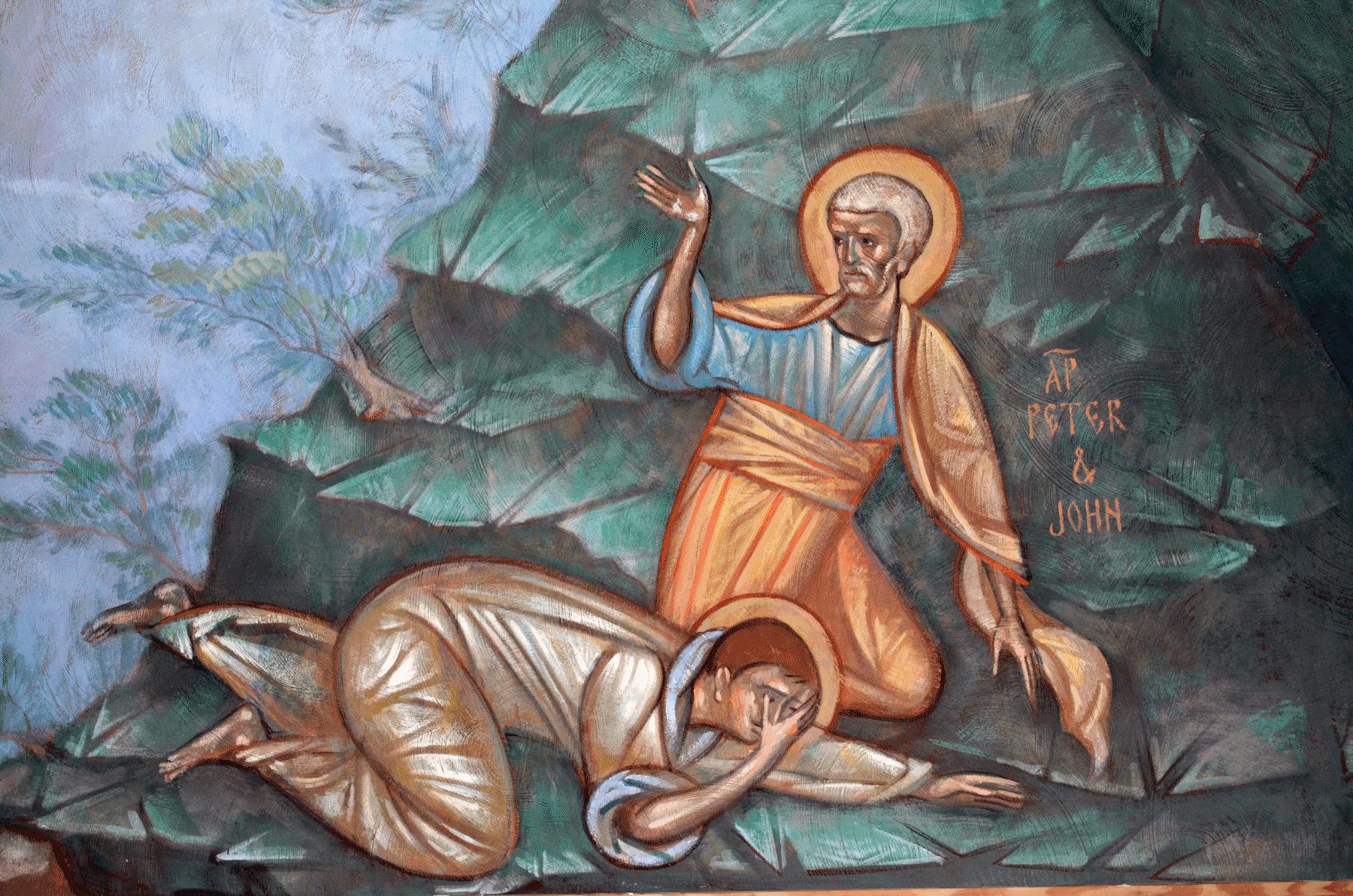 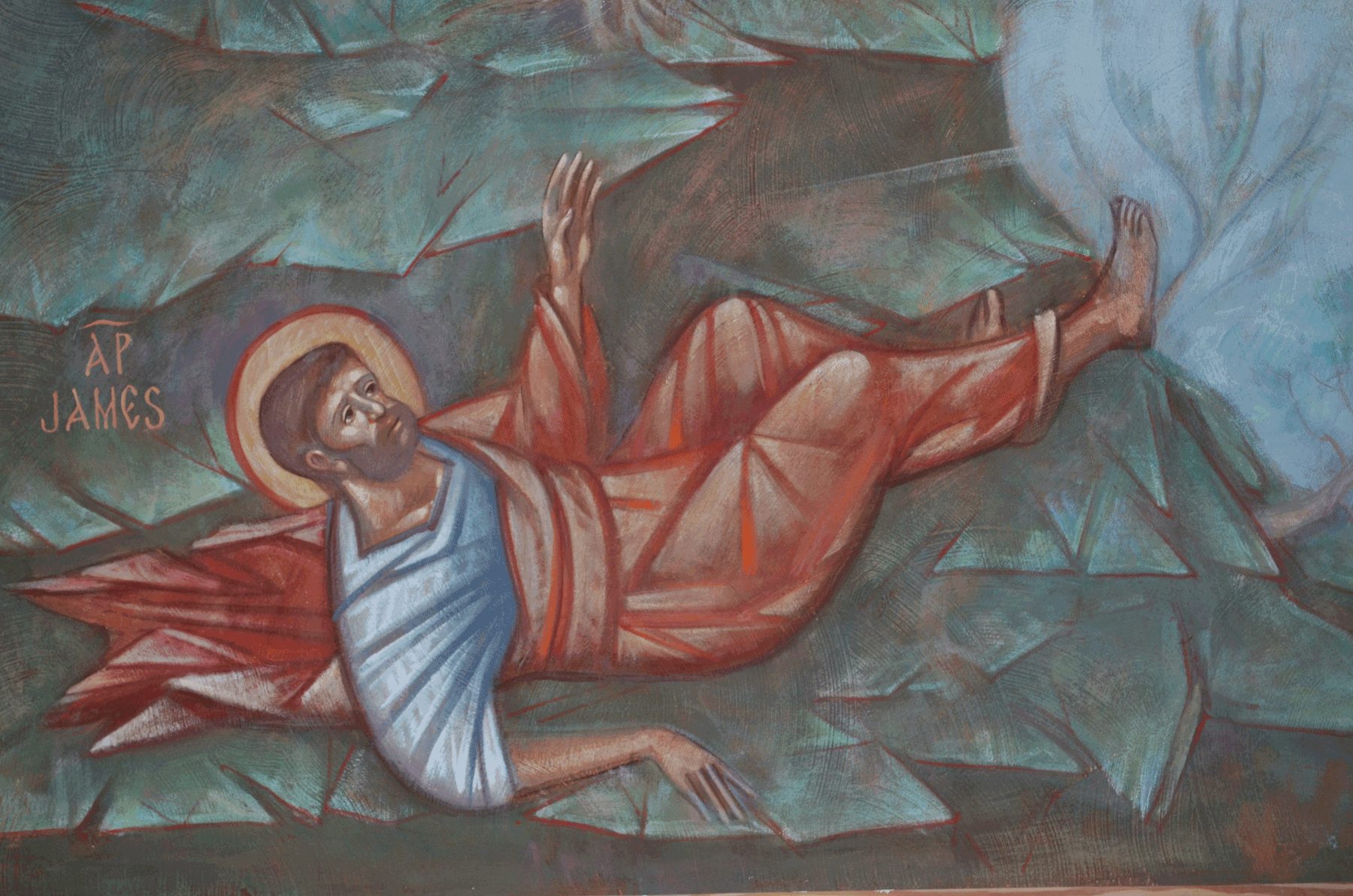 Though it is unusual for a west wall, the Transfiguration also has rich potential for interpreting the act of departure. We understand the Transfiguration as a change, not of Jesus’ form itself, but of the disciples’ ability to see his true visage more clearly. If we could see with a pure heart, all creation would appear transfigured with the presence of God.

This is the change of vision which the liturgical life cultivates in us, gradually over time as we participate. At the liturgy, following Holy Communion we sing “we have seen the true light,” just before the dismissal. As we depart the building, just before our eyes meet the bright daylight again, the Transfiguration icon reminds us to see the people and circumstances we meet in this new light. 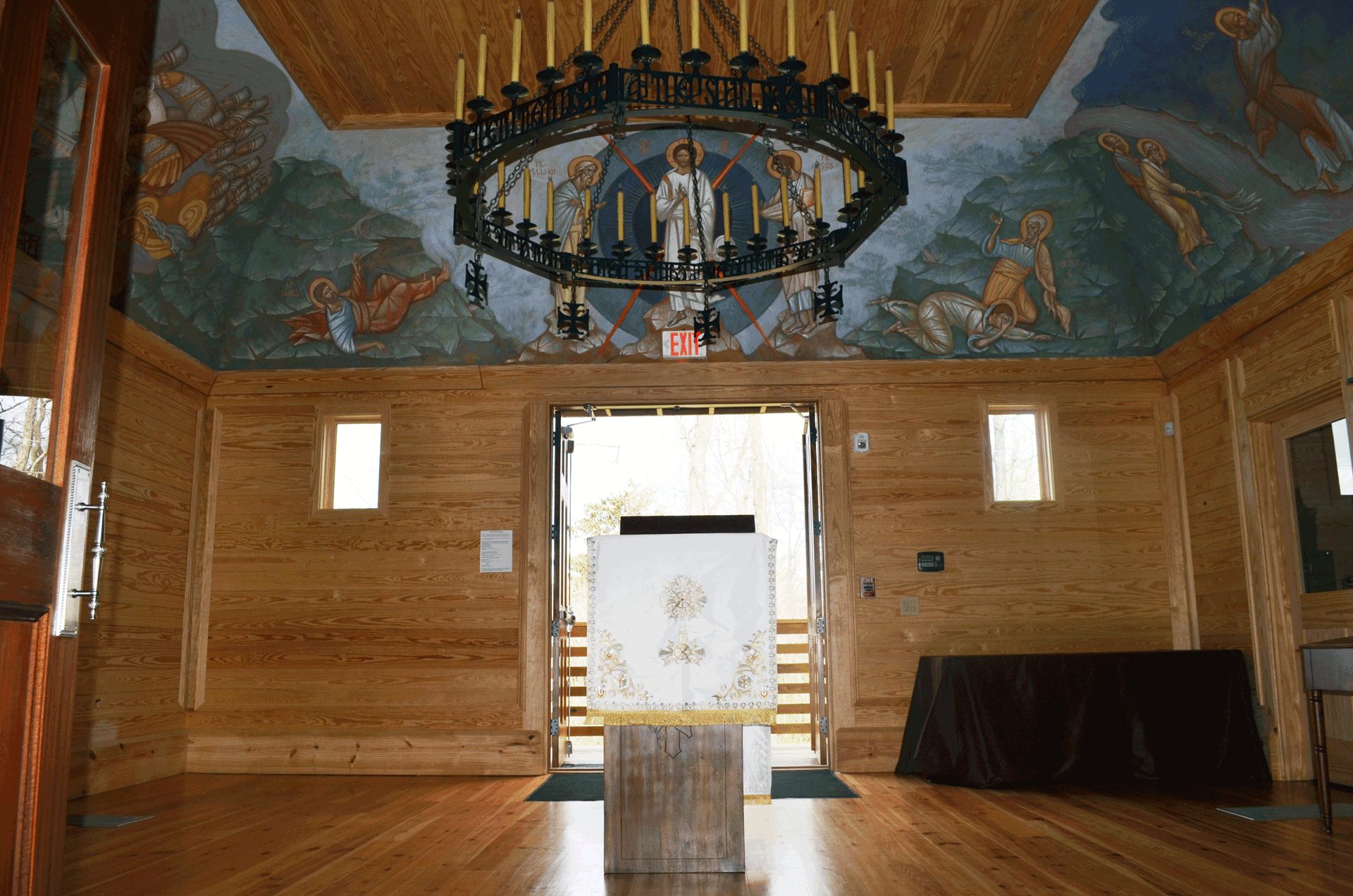 Door exiting the narthex to the outside. (This mural had to incorporate the exit sign, which may be fortuitous. The Gospel says that at the Transfiguration, Jesus spoke to Moses and Elijah of His “exodus” – a Greek word that can mean exit.)

I painted these and other mural projects with mineral silicate paints. These paints have the same desirable visual qualities as traditional fresco. They are, however, more durable for both interior and exterior applications. They are also much simpler to use. I believe this is the best option in most cases for church murals. For any readers whose parish may be considering iconography in the future – please learn about silicates before making major decisions! I am happy to share information about this kind of paint with those who have interest.