I would like to share an interesting project in which I collaborated with iconographer Natalia Aglitskaya to develop a new icon composition. The project was a commission from Trinity College in Hartford, Connecticut, to commemorate their fiftieth anniversary of coeducation, which occurred in 2019. The college wanted a memorial to the admission of women to be installed in the chapel. The chaplain approached me with the idea of creating a special icon depicting Saint Katherine of Alexandria, who stands out among women saints for her reputation as a scholar.

Trinity College Chapel is an important work of Neo-Gothic architecture built in 1933. It was designed by Philip H. Frohman, architect of the National Cathedral, and is consecrated as an Episcopal church. I have had the opportunity to furnish custom light fixtures for the chapel on several occasions, and was pleased to accept the commission to create a memorial icon. A large gilded icon would look impressive in the stony colorless interior of the chapel, and would expose the tradition of Orthodox liturgical art to the students of many faiths who use the chapel.

I ordered a custom handmade board from Saint John’s Workshop, and hired Natalia Aglitskaya to paint the icon. Natasha paints in a rich classic Russian style, and she has internalized the tradition such that she can draw original compositions with great authenticity.

In designing the image, the first challenge was the rare subject. According to the hagiography of Saint Katherine, she was the aristocratic daughter of the Roman governor of Alexandria. As a wealthy girl living in the famous city of libraries and scholars, she received a world-class education. After her conversion, she decided to confront Emperor Maximian (A.D. 305-313) and implore him to stop persecuting Christians. The emperor, intrigued by her beauty and intellect, assembled fifty renowned scholars and challenged them to convince her of the superiority of paganism. Katherine won the debate, and the philosophers accepted Christ, resulting in all of them being martyred.

Though the debate with the philosophers is central to St. Katherine’s story, it is very rarely depicted. We were able to find a few western paintings of this scene, but no historic Orthodox icons. It was not obvious how to compose one, as crowd scenes in icons can take several forms. Ultimately, we decided that Katherine needed to be far more prominent than the other figures. She needed to fill the board if the icon was to serve as a devotional image, rather than a merely illustrative one. So we placed the saint on a central stage, with the philosophers gathered on benches in the background. The non-linear perspective of icons allows this to work quite well.

A second challenge was a requirement from the College Administration – the icon had to depict ethnic diversity, including both black and Asian figures. This, of course, is not typical in icons, and pagan philosophers would normally be depicted as Greeks in togas (one of the few cases in icons where such dress would actually be historically accurate!). I did not want merely to include token ethnic people in togas, so I considered how to make this requirement an asset to the project. Alexandria was a major capital of the Roman Empire and the world’s center of learning, so it seems plausible that scholars from the wider world could have been present at the emperor’s court. So I asked Natasha to include a figure from Ethiopia, another from Nubia, and finally a Hun (the Huns bordered the Roman Empire at that time, and had Asiatic features). I researched the historical dress of these nations, and provided reference images to Natasha, which she translated into iconic figures.

Additionally, I was eager to make the contextual scenery in the icon recognizable as Alexandria. I asked Natasha to place the harbor in the background, so that the emperor’s court would overlook the sea. In those days, Alexandria had the most famous harbor in the world, thanks to the Pharos, the great lighthouse, one of the Seven Wonders of the World. This lighthouse stood from the 3rd century B.C. until the 14th century AD, and was the defining monument of the city. Its appearance is well known from ancient descriptions and mosaic images, and I helped Natasha design an accurate rendition of it in icon-style. We also studied the flora of Alexandria and made a point of including a date palm and papyrus. I feel these details will be of great interest to those who are learned in history and geography, and will help to make the icon accessible to the many non-Christians at the college.

I wanted the subject of this icon to be understandable to people unfamiliar with the life of St. Katherine, and unfamiliar with icons and hagiographic titles in general. So I decided to title the icon with a clear and descriptive text: Saint Katherine Teaching the Philosophers of the Alexandrian Court. It is not very typical of an icon inscription, but it is grand and mysterious, and I hope it intrigues people and encourages them to look up the whole story.

The style of lettering is always tricky in English-language inscriptions. I don’t care for fonts which try to disguise our alphabet as Greek or Slavonic, but a completely western font can be visually discordant with the Orthodox style of painting. Furthermore, fonts that are too easy to read can be a distraction from prayer, as the eyes are drawn to keep reading the words again and again. But a font that is too illegible would not work here either. Ultimately, I designed my own icon font with influences from Edwardian typography and Romanesque inscriptions. I hope it will prove helpful to other iconographers struggling with how to depict the western alphabet in icons. 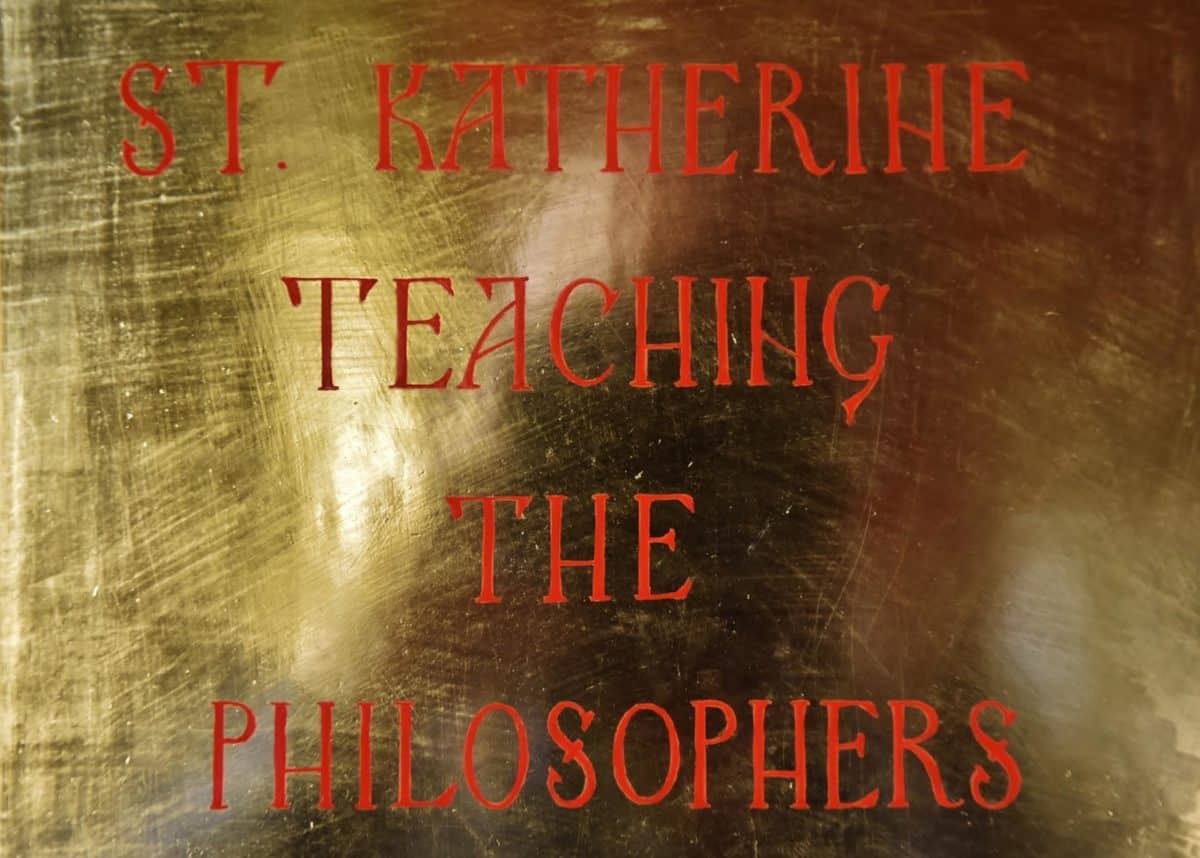 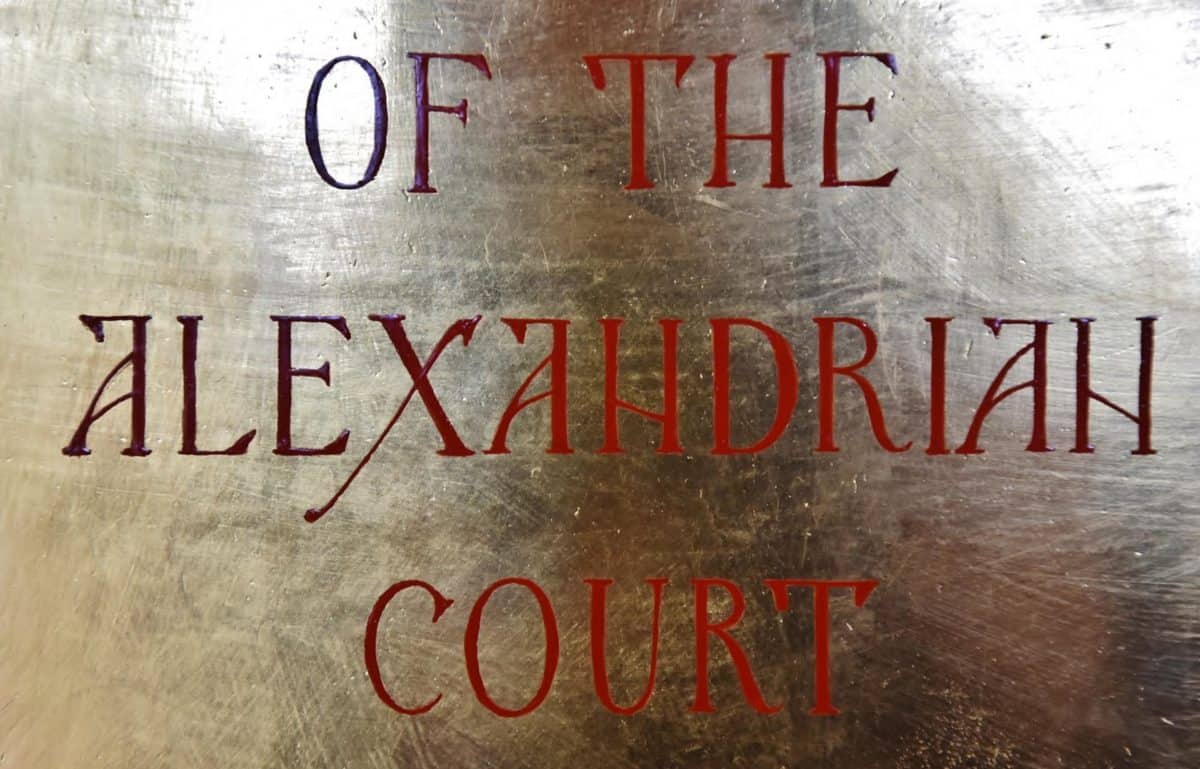 The icon required a dedicatory inscription as well, referencing the anniversary of coeducation, but I did not want this inscription painted in as though it were part of the icon. Instead, I hired a silversmith to make an engraved plaque for the bottom edge of the frame. This allows the dedicatory inscription to visually stand apart from the painted holy image. I also provided one my simple glass lampadas, and a custom wrought iron hook with which to hang it from the stone wall.

I pray that this new icon composition will prove edifying to the church, and that others may see fit to paint this interesting subject from the life of St. Katherine. 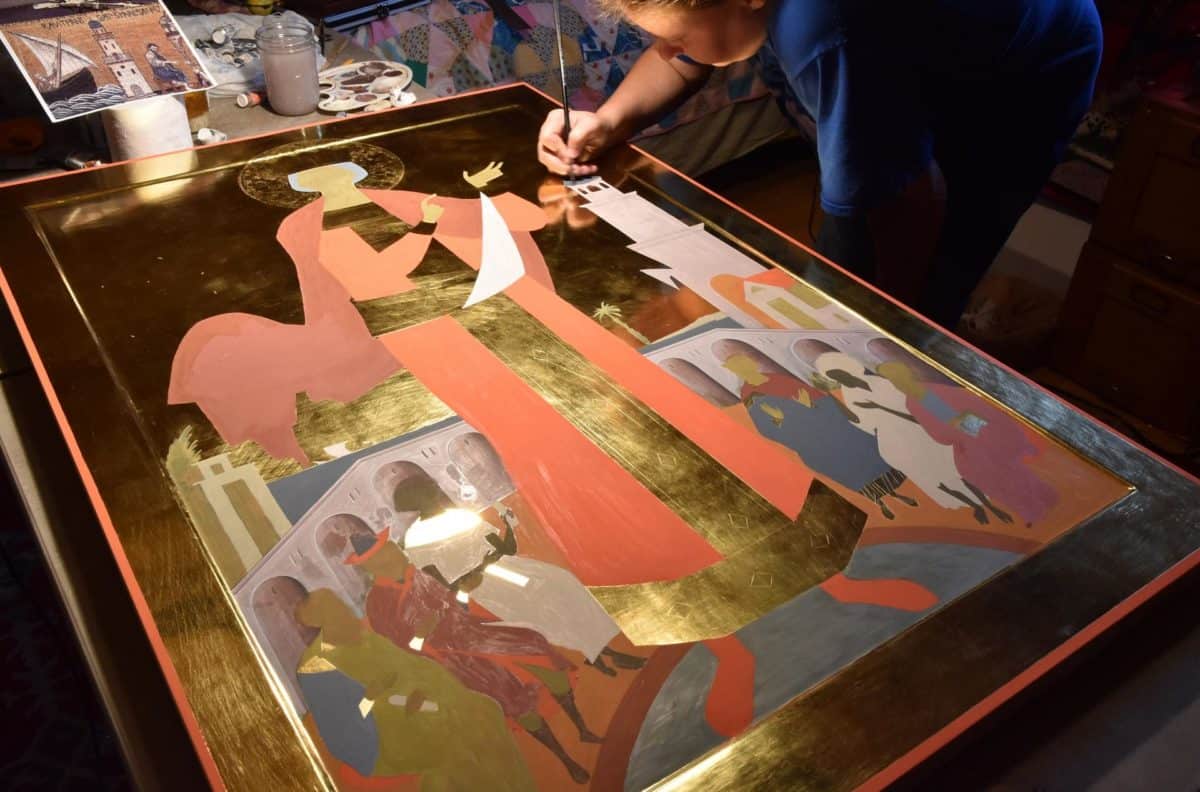 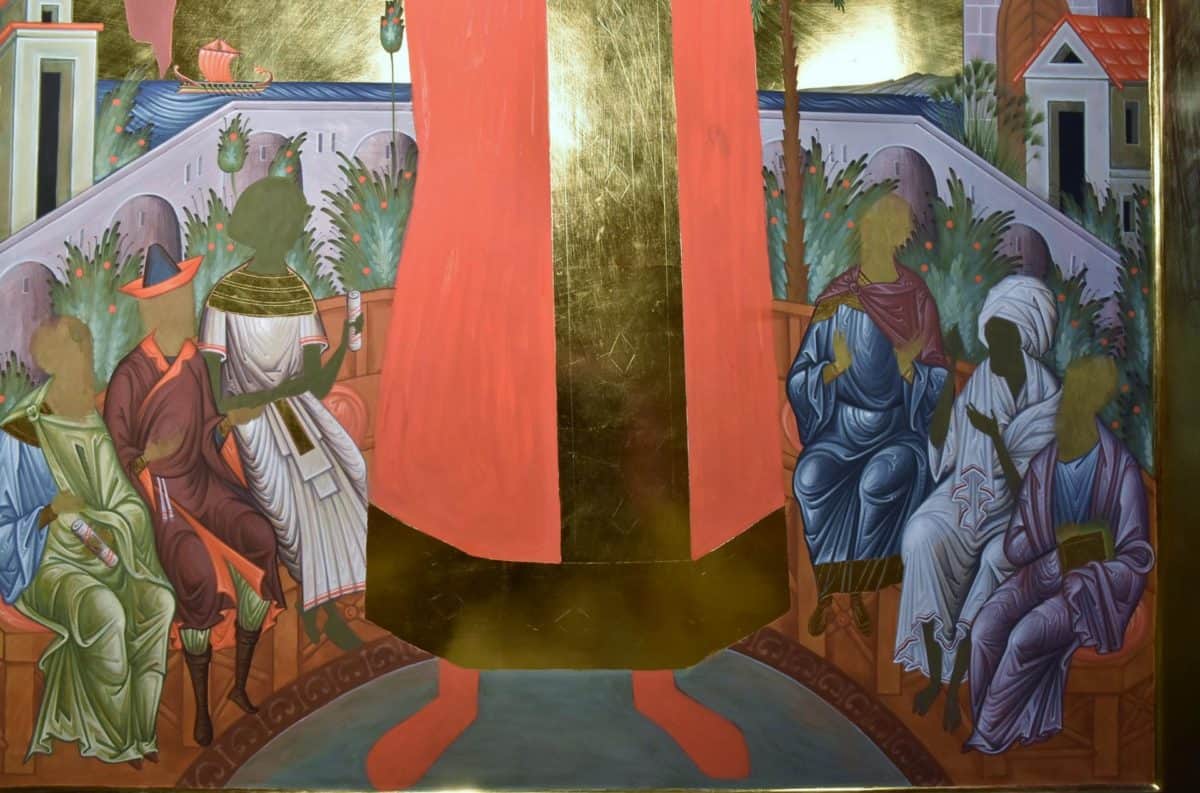 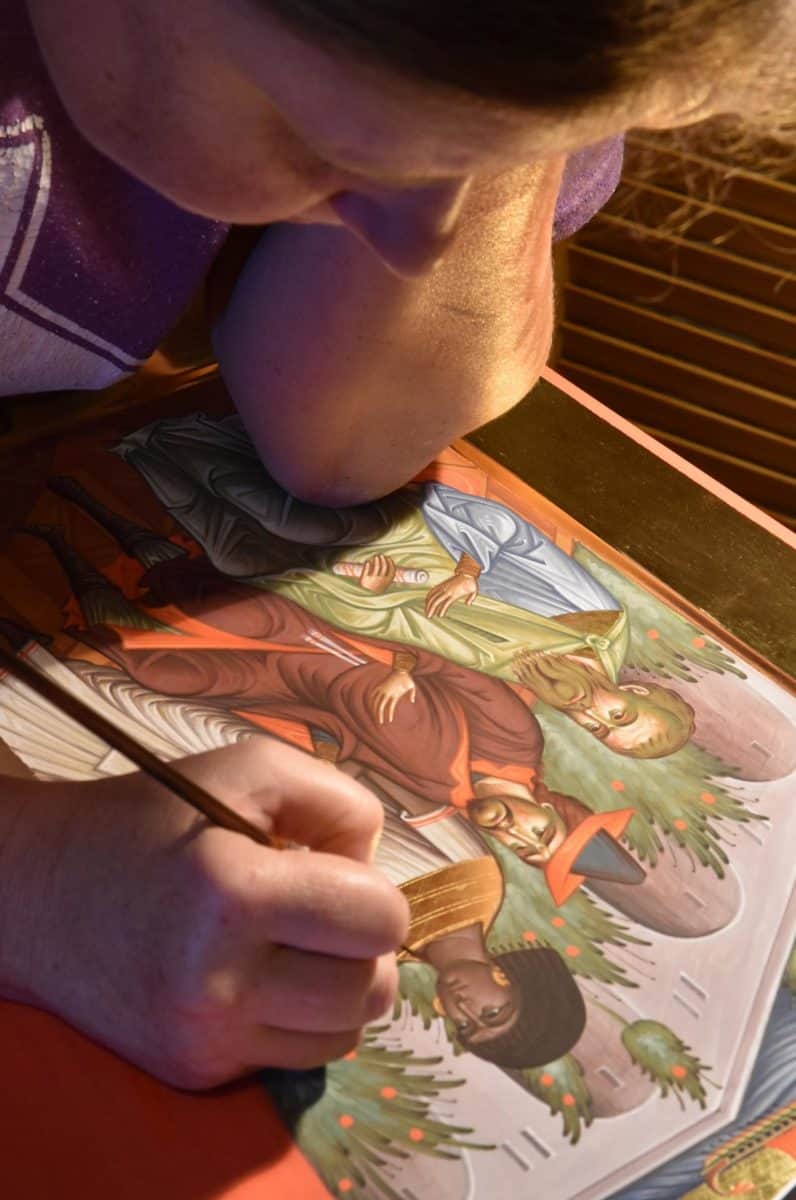 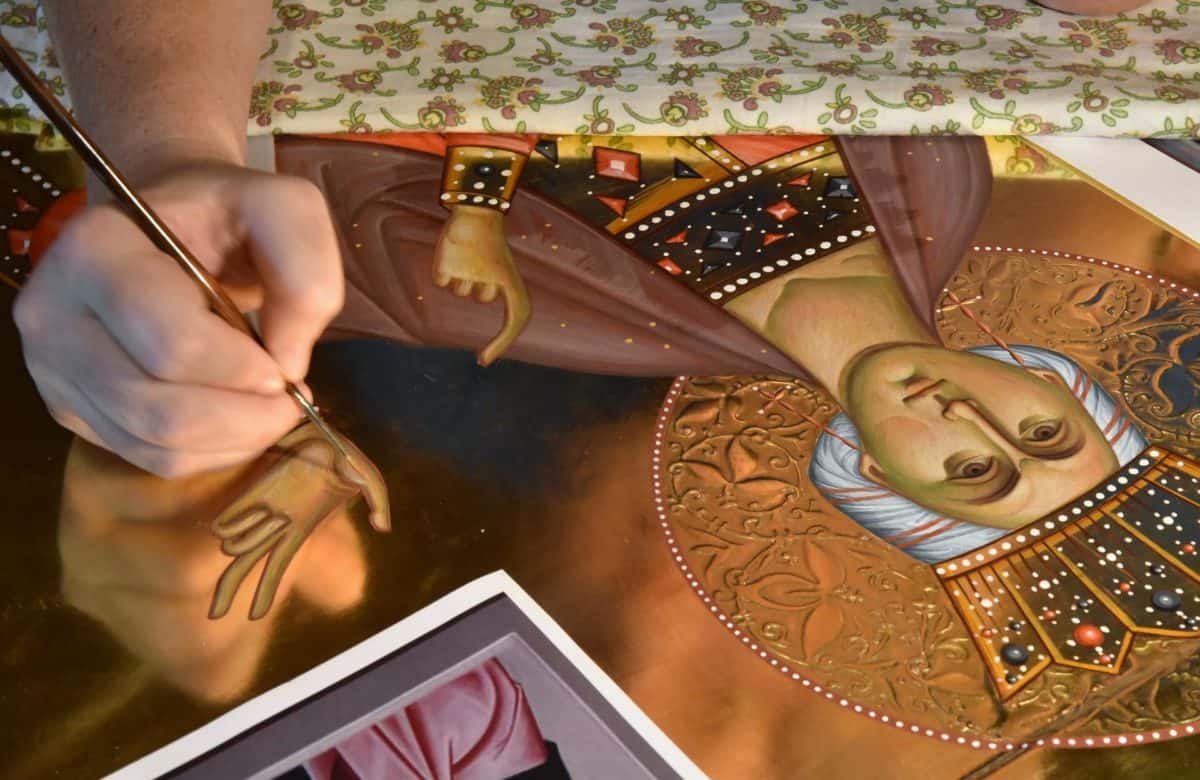 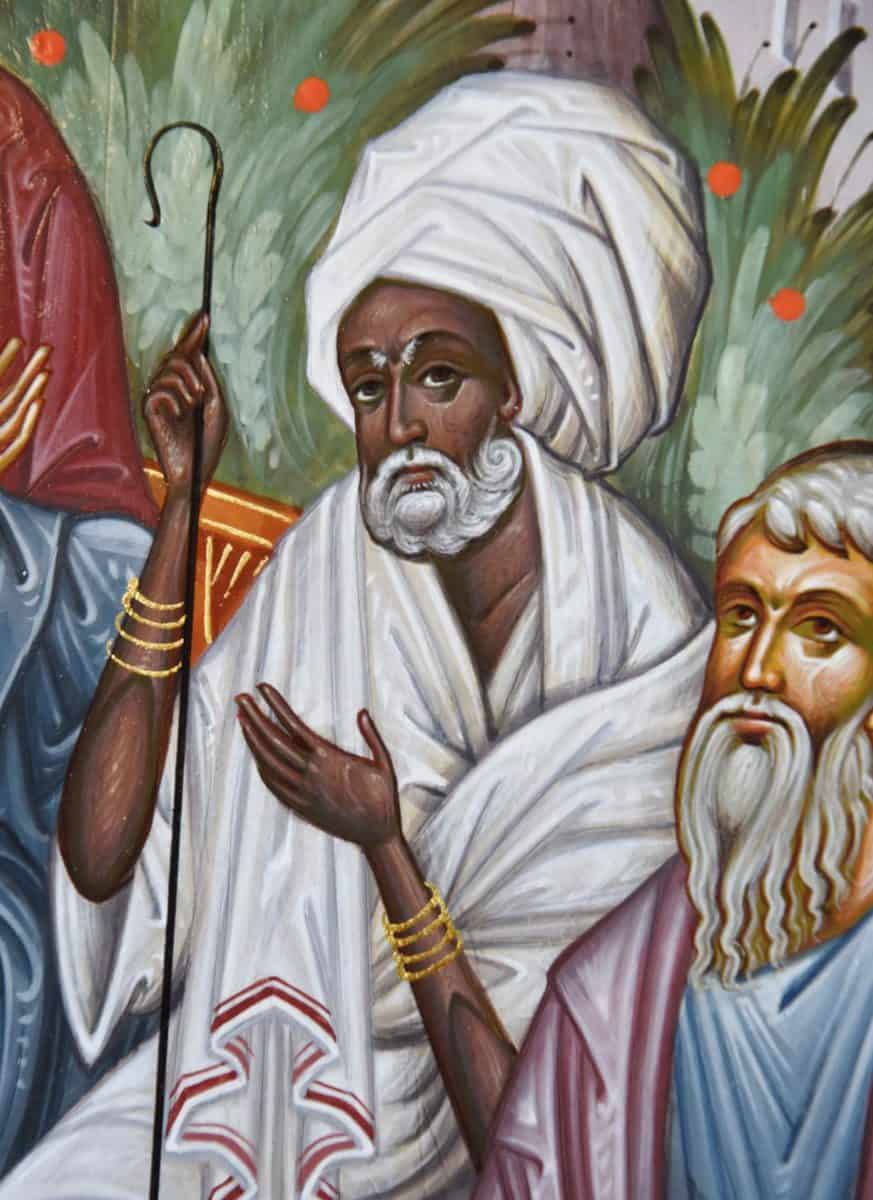 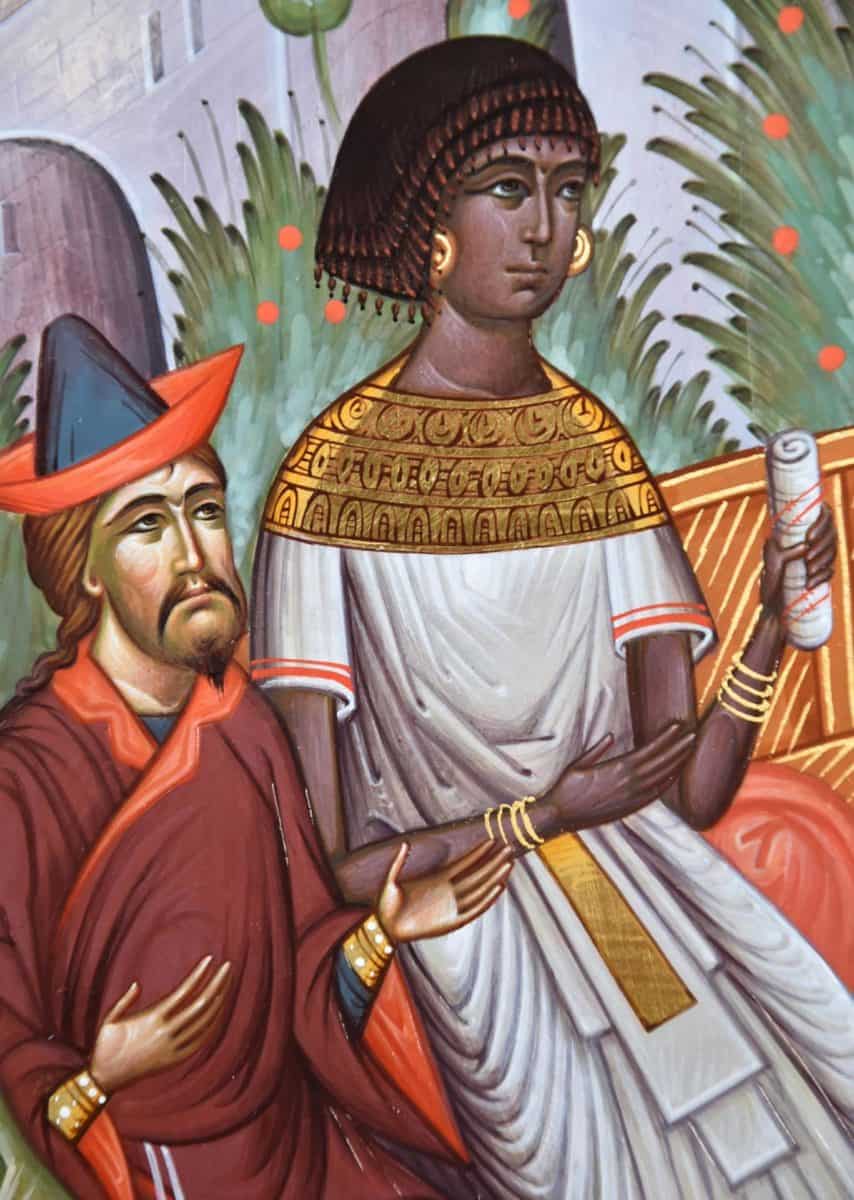 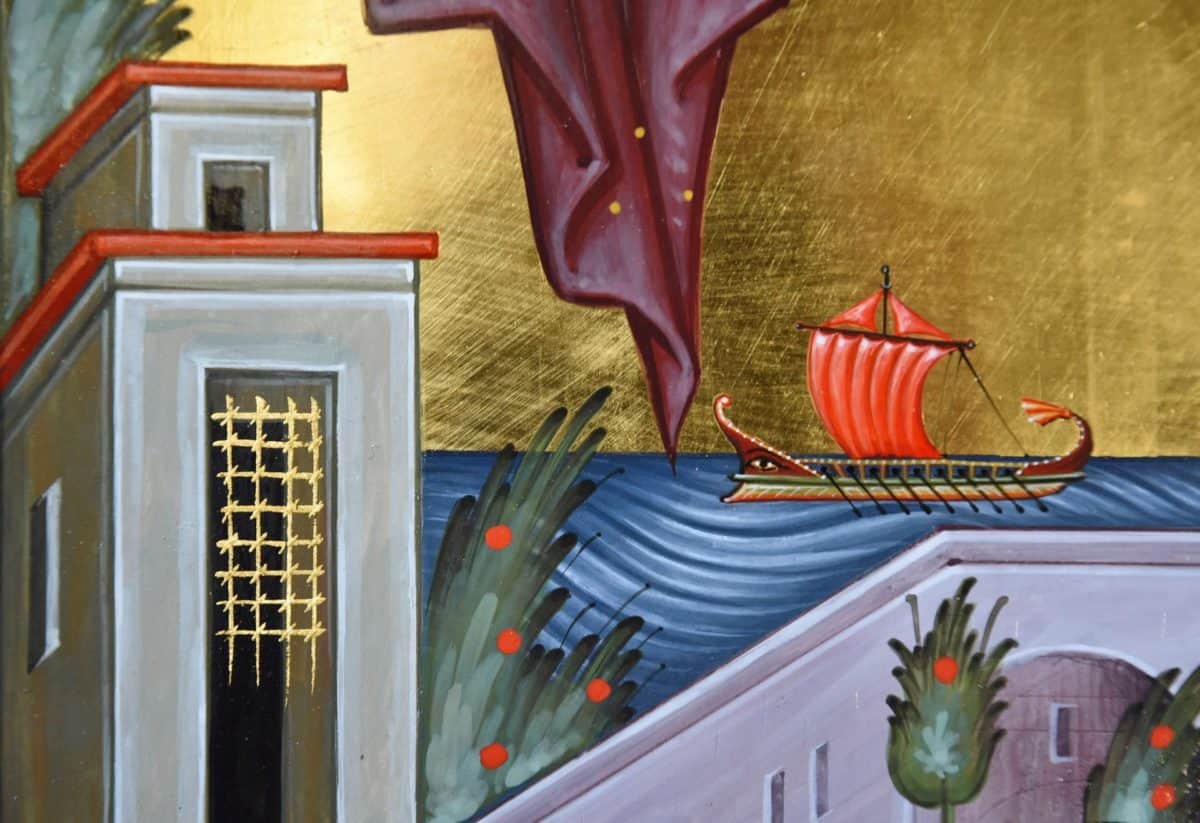 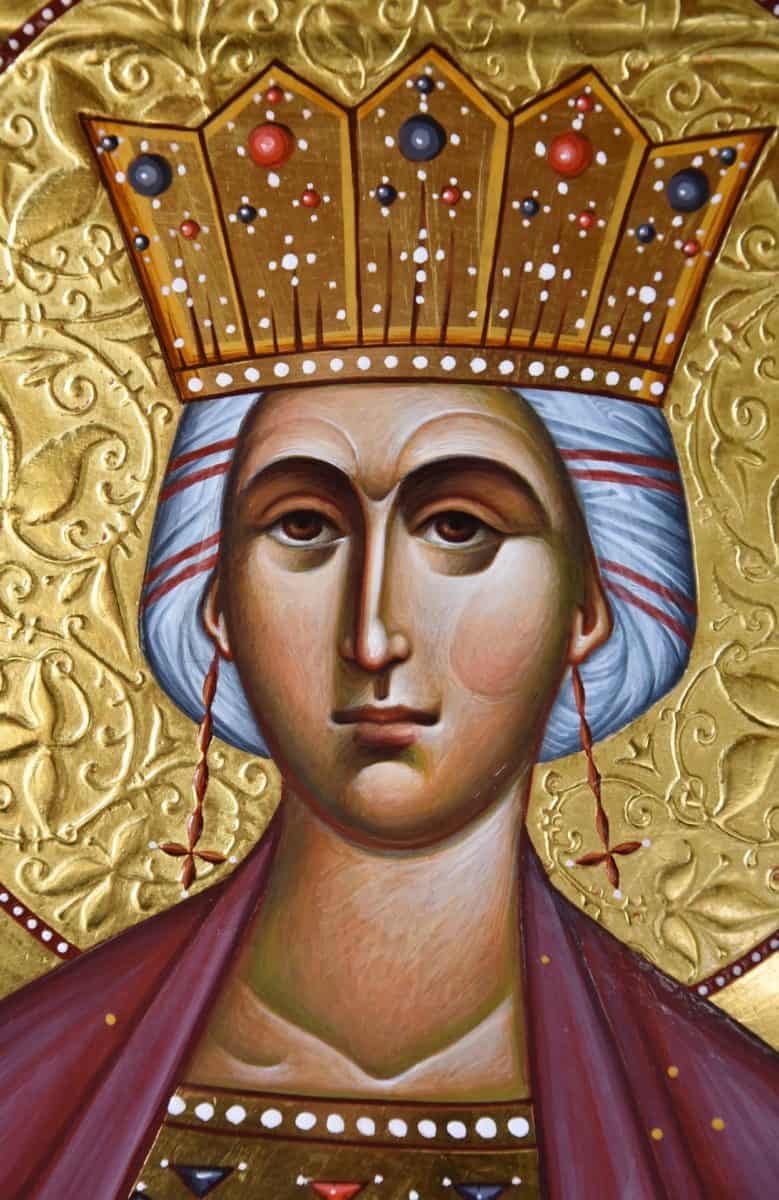 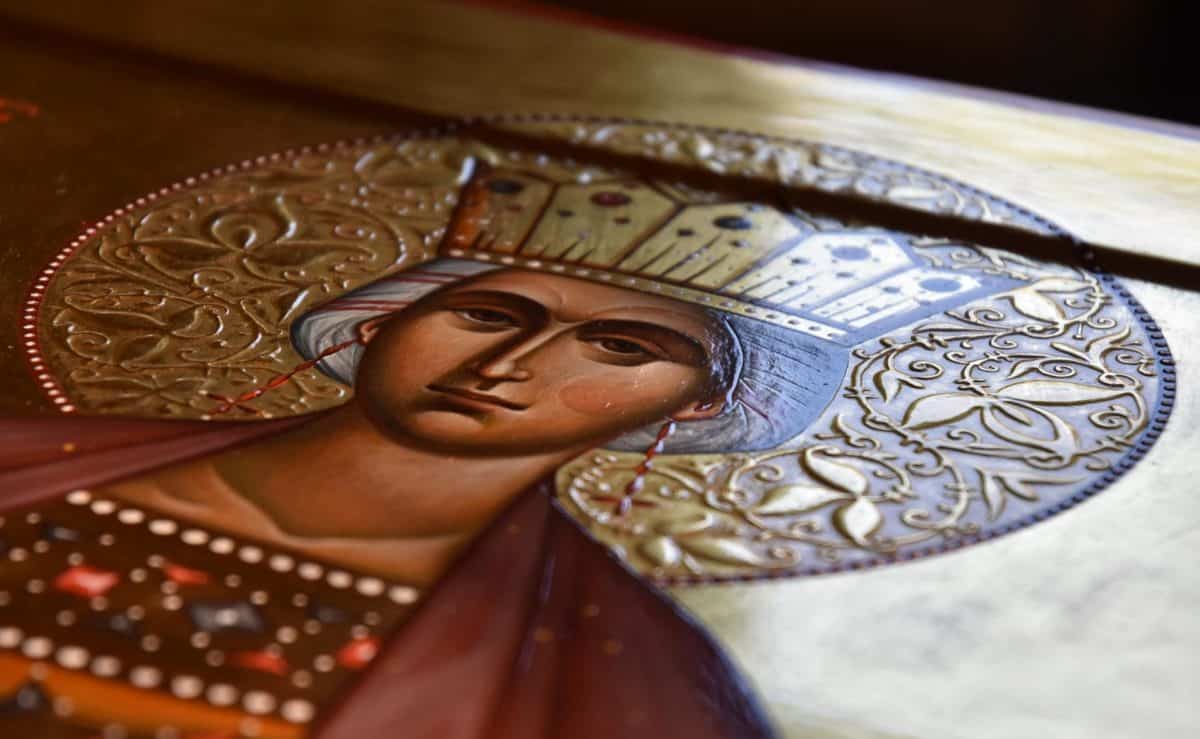 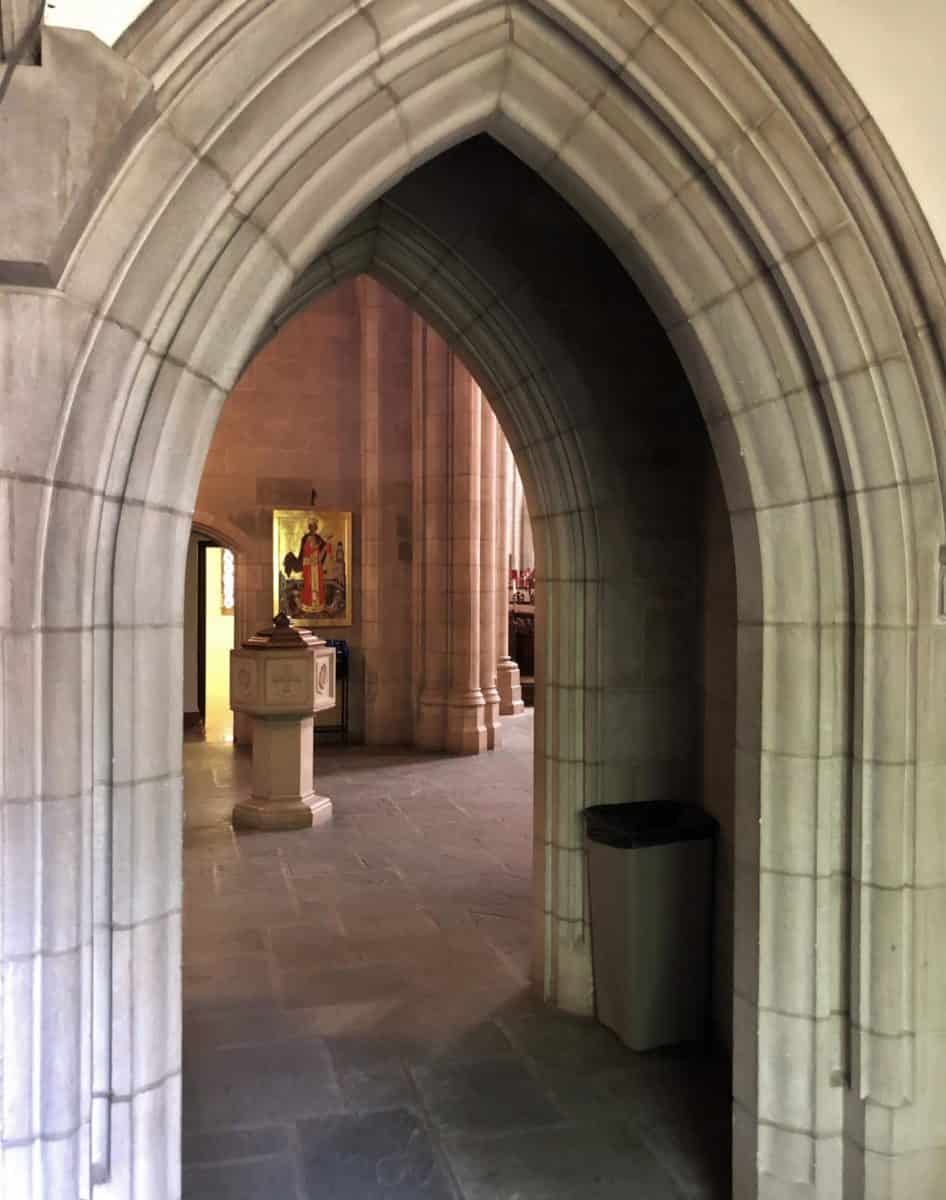