For the past year, I have been working to design a substantial new church building for the OCA parish of St. John of the Ladder in Greenville, South Carolina. The parish has acquired an attractive wooded property and wishes to relocate completely. They will need a temple for 250 people and also a parish hall.

After examining the budget and needs of the parish, it became clear that an ambitious masonry church in Byzantine style would be unaffordable. But the parish was rather set upon domed Byzantine architecture, and was not receptive to the timber-frame barn-like interior I initially suggested. So I decided to attempt something new – a design that is fully Byzantine in form and expression, and yet built completely honestly out of wood, without the slightest suggestion of imitating masonry.

I am unaware of any churches that have been built recently in this mode. But there do exist precedents in Orthodox churches built by the Russian Empire around the turn of the 20th century. In Poland, Slovakia, Japan, Alaska, the Canadian Midwest, and even a few scattered examples in American cities, one can find good examples of Orthodox churches built in wood a hundred years ago. These are not the log churches of simple villages, but modern structures framed and sided in sawn lumber. They have the formality and grandeur of Imperial architecture, but could be built quickly and inexpensively.

Our example will be built with 2×6 stick-framed walls. The siding will be lap siding and shingles, traditional for the area. The porch will be timber frame with arched braces. The windows are arched and the roof is metal. These are materials and details that could easily be found on a Protestant church or ornate house in South Carolina from the late-Victorian era. The form of the building, however, is unmistakably Byzantine, and it should be recognizable to most people as an Orthodox church.

The interior is highly innovative. I decided to translate the marble revetment of high-Byzantine architecture into wooden wainscoting. The paneling is constructed from tongue and groove yellow pine boards (an inexpensive local material) assembled in geometries that mimic the patterns of bookmatched precious marbles. The columns, too, are crafted from pine, as are the impost capitals. The iconostasis is perfectly integrated with the wood paneling, like the built-in marble templon screen of Byzantine church. Above the paneling there are ample areas of lime-plastered wall where frescoes can be painted.

Perhaps the most curious aspect of this interior is that it exactly reverses the color scheme of the high-Byzantine churches on which it is based. In the Byzantine church, the marble floor and revetment is cold shades of blue and gray. The walls above glow with warm golden mosaics. Here, though, it will be the opposite. The pine floor and wainscot will glow warmest, while the frescoes above, with blue-gray background, will be cool and still.

The church and the parish hall will occupy a site that is currently a meadow with a distinct slope down to the west. The buildings will serve to retain the slope, giving them some dramatic extra height on the low side. The two buildings connect at an angle to define a leveled courtyard, and will be linked by a continuous raised porch. The centerpiece of the courtyard will be a stone baptistery. All traffic will be directed around this courtyard (on the outside of a wooden fence) to parking at the rear of the lot. It is a site concept that suggests a landscape that has evolved with time. And it provides a good separation between the experience of the car and the final walk along the porch on one’s way to church.

If fundraising goes well, the church may be under construction next year. The design work is done in association with Morris Architecture as the Architect of Record.

Update: This project was substantially built in 2018, though many elements remain to be completed as time and funds permit. Here are photos of the construction: 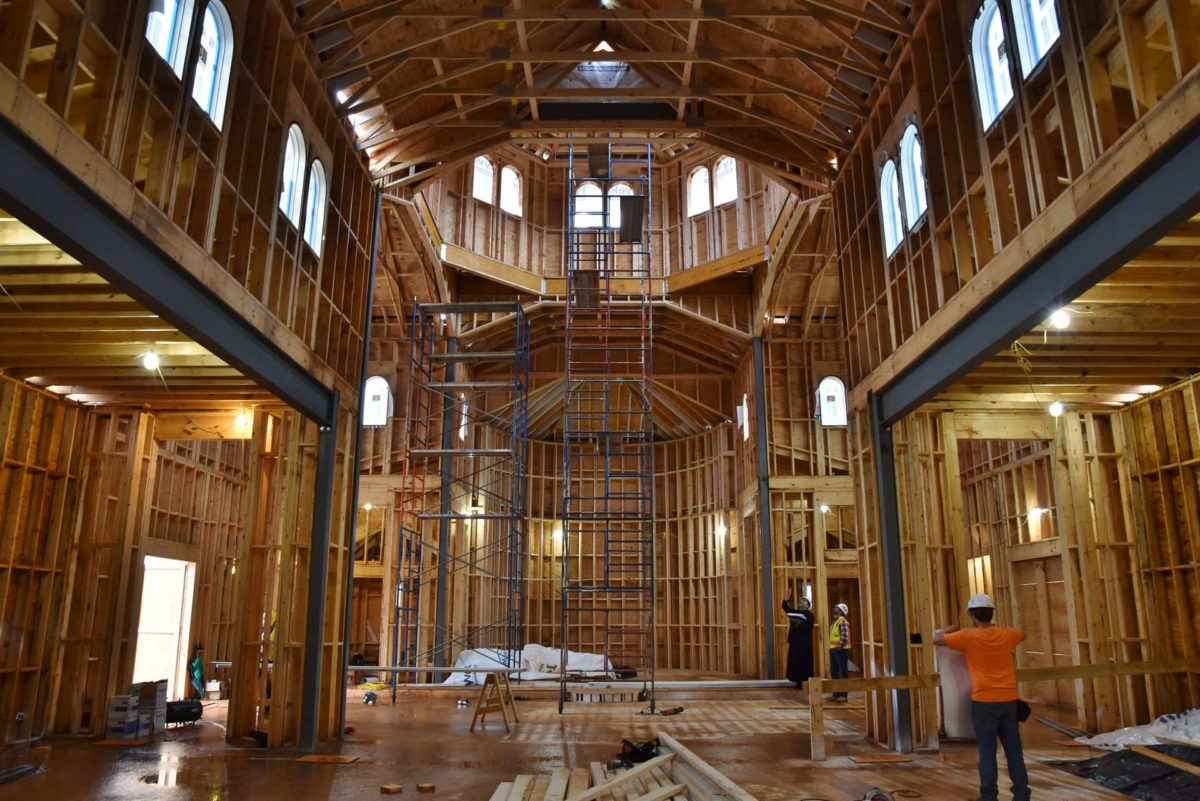 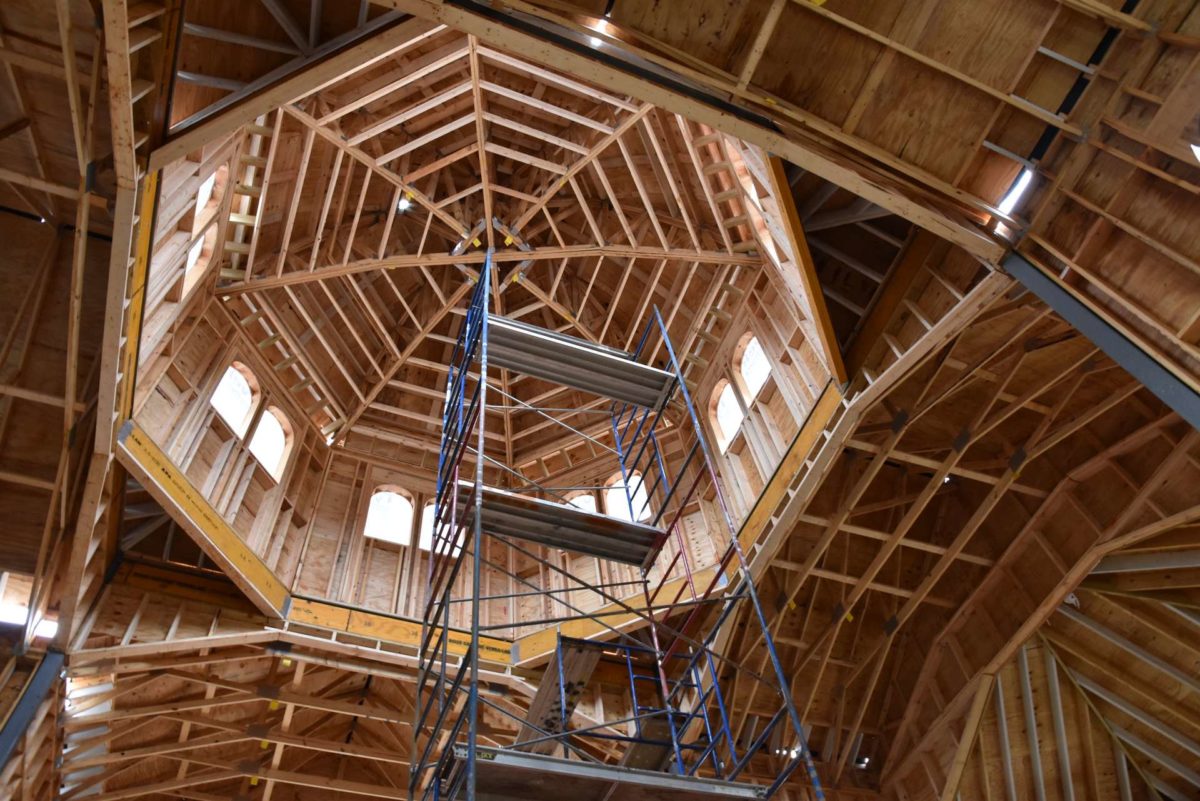 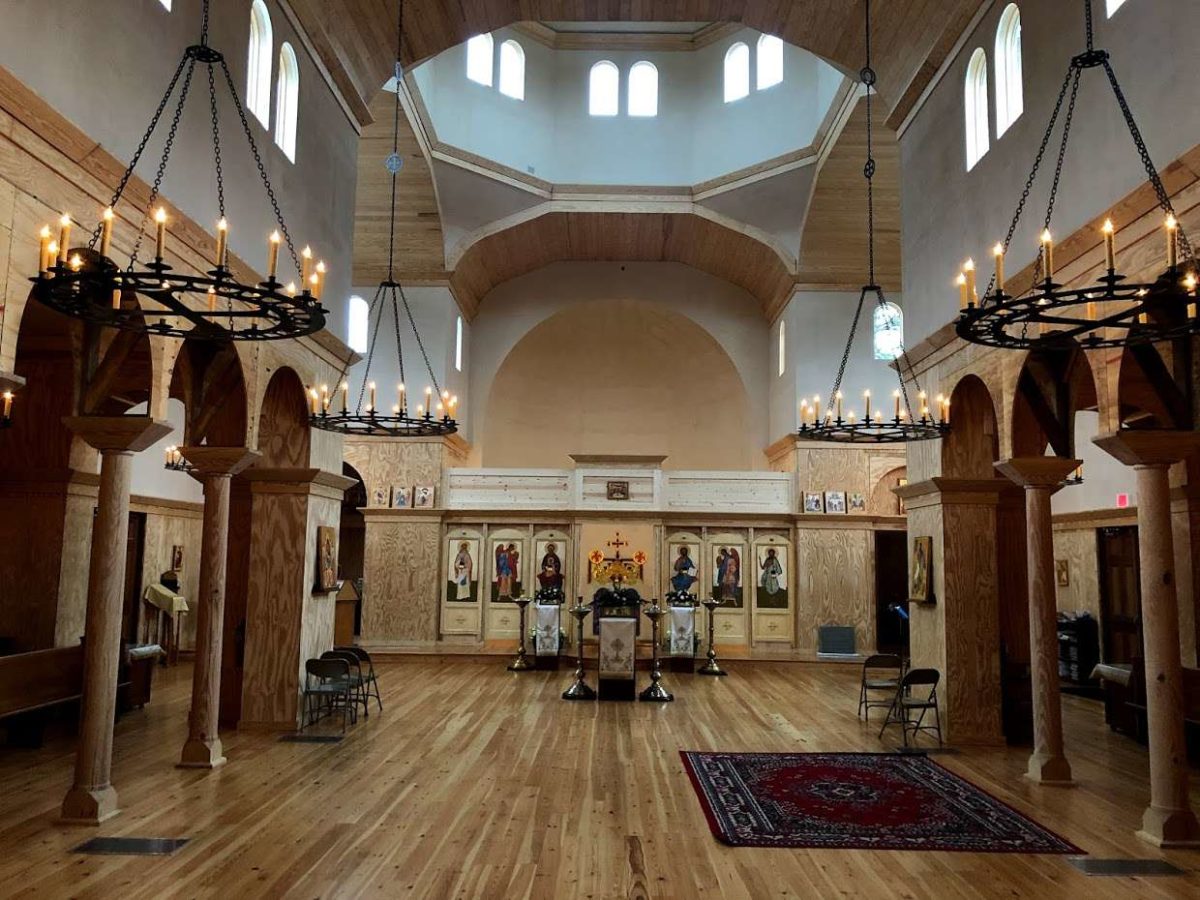 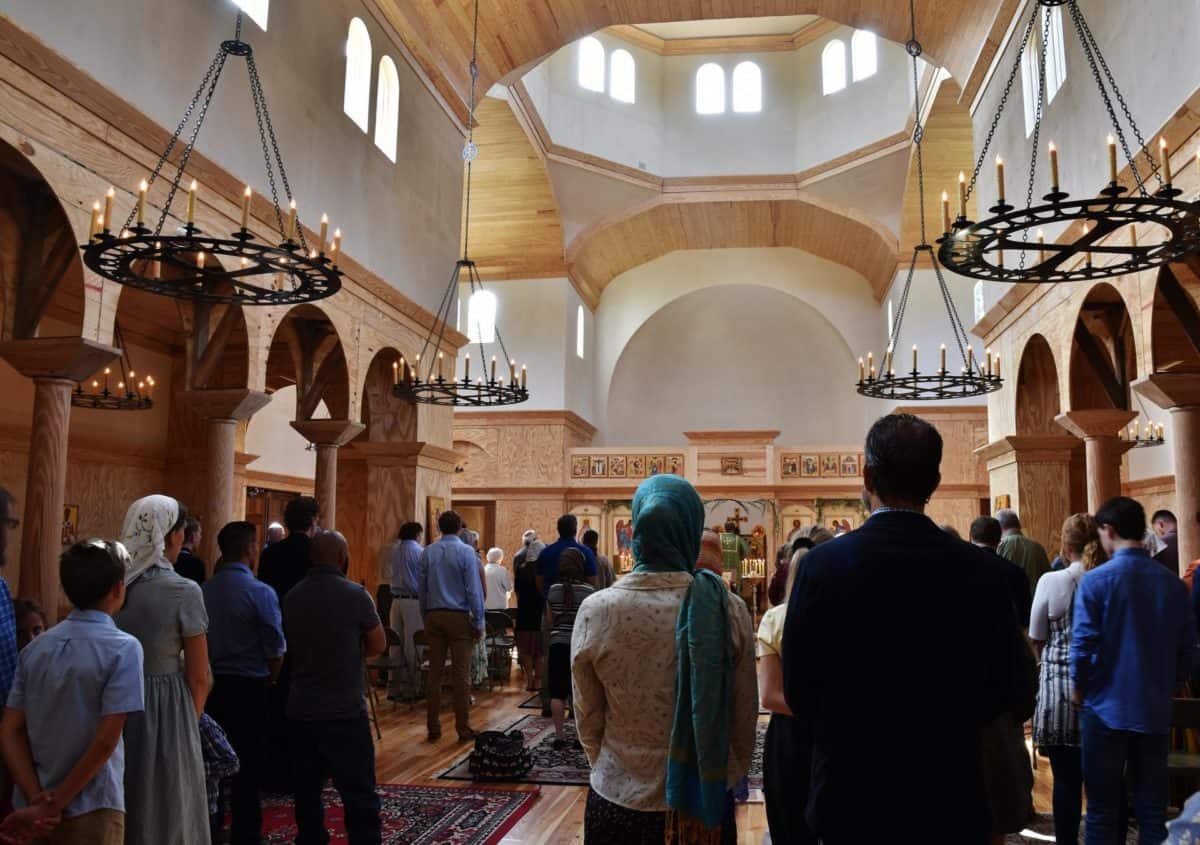 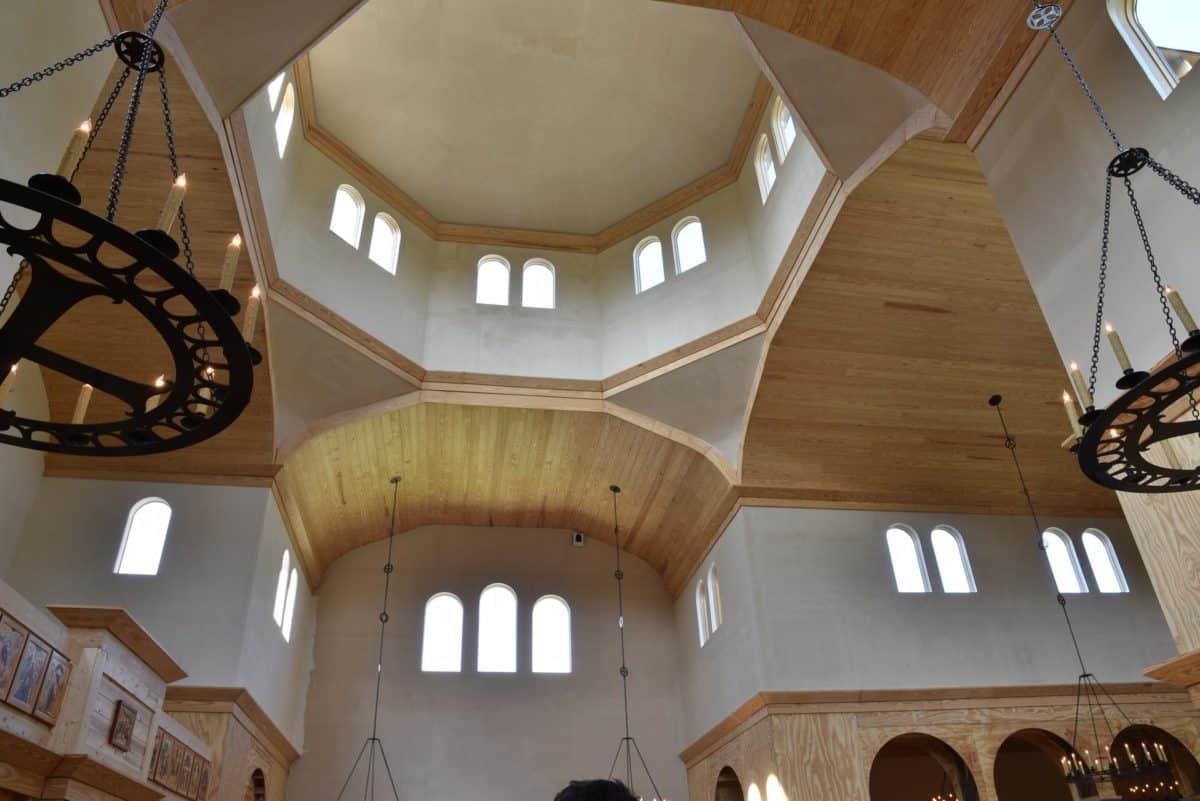 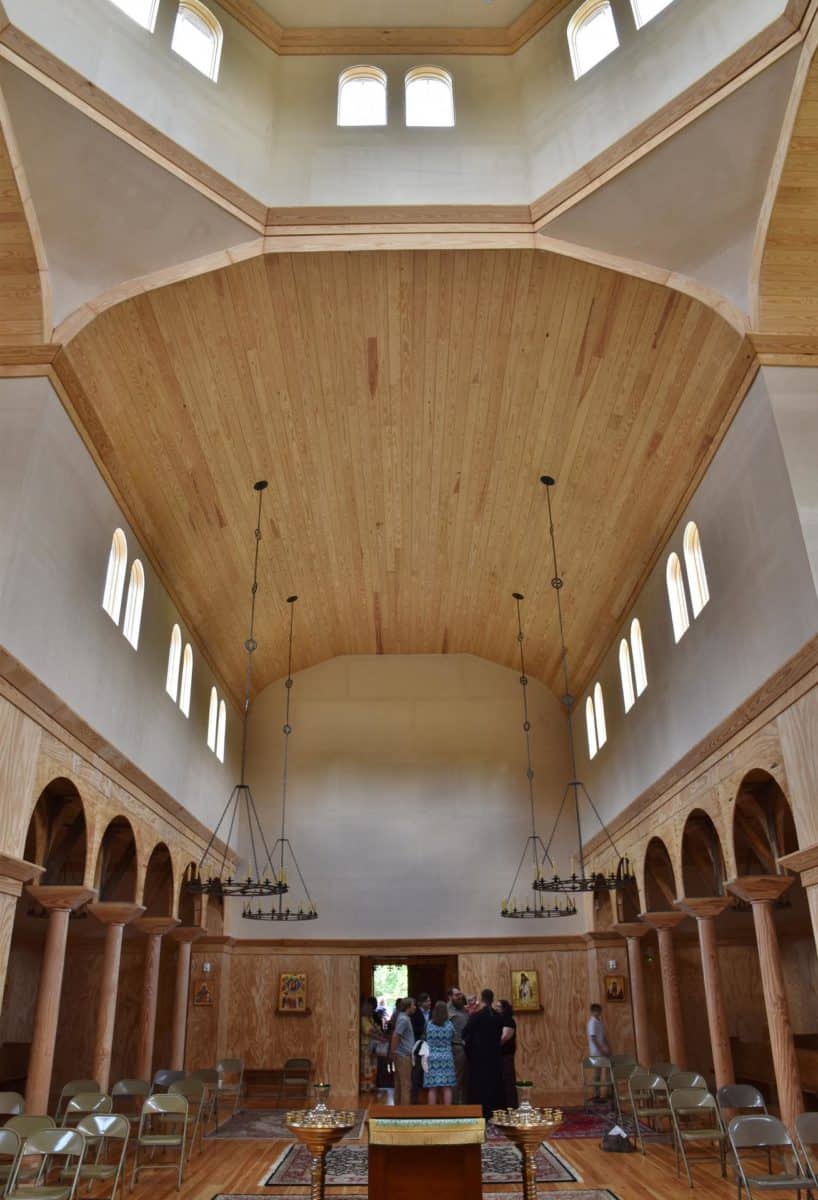 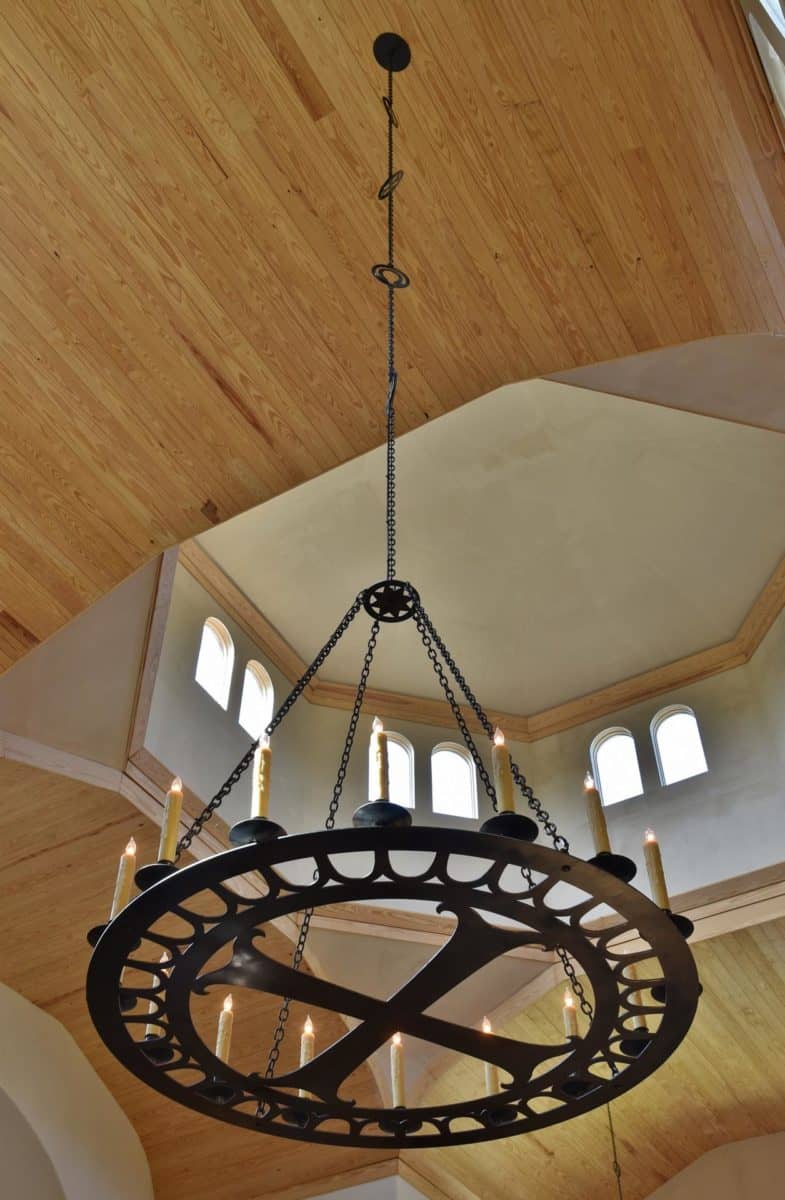 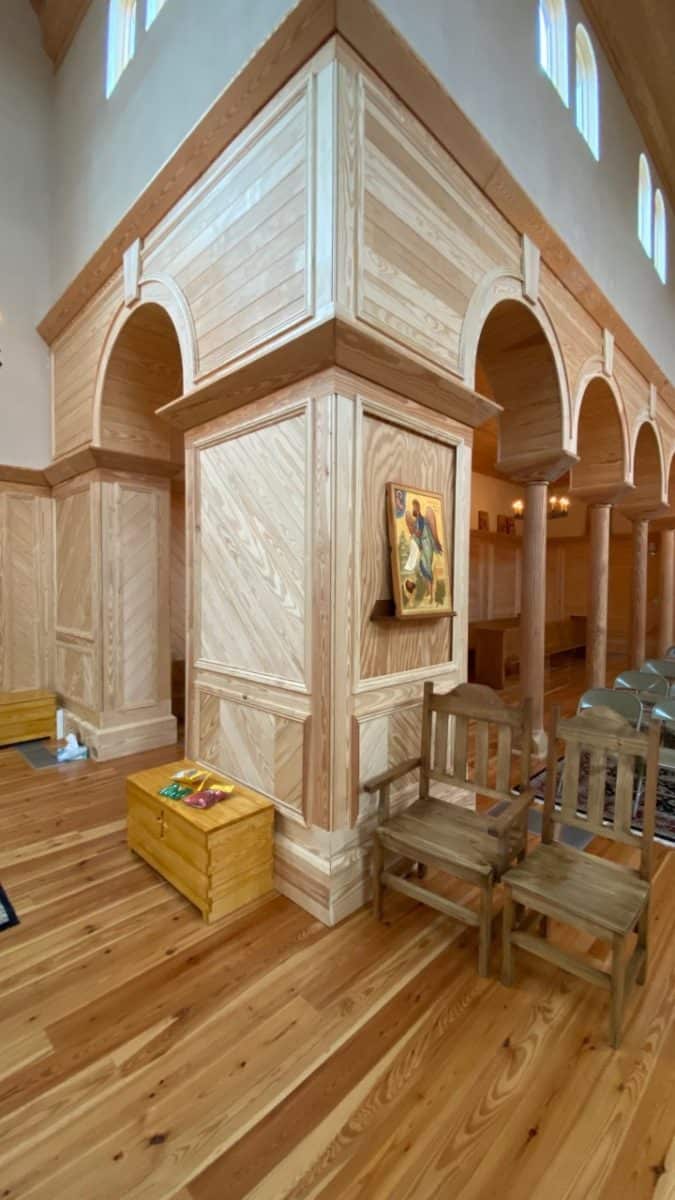 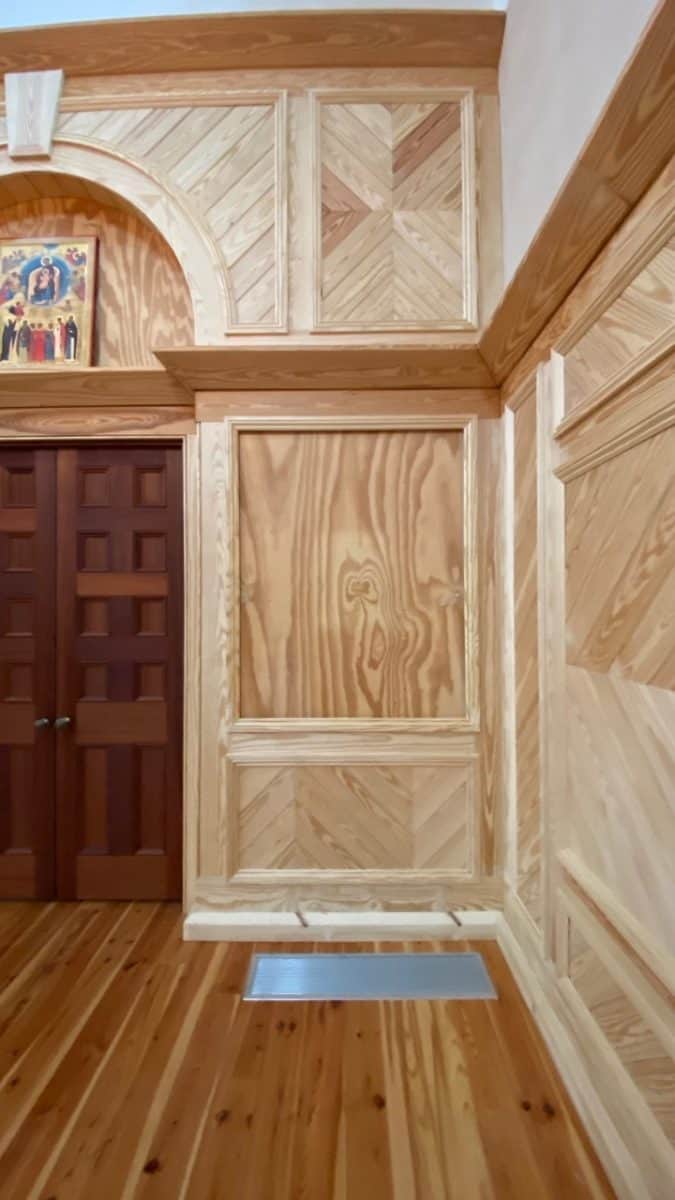 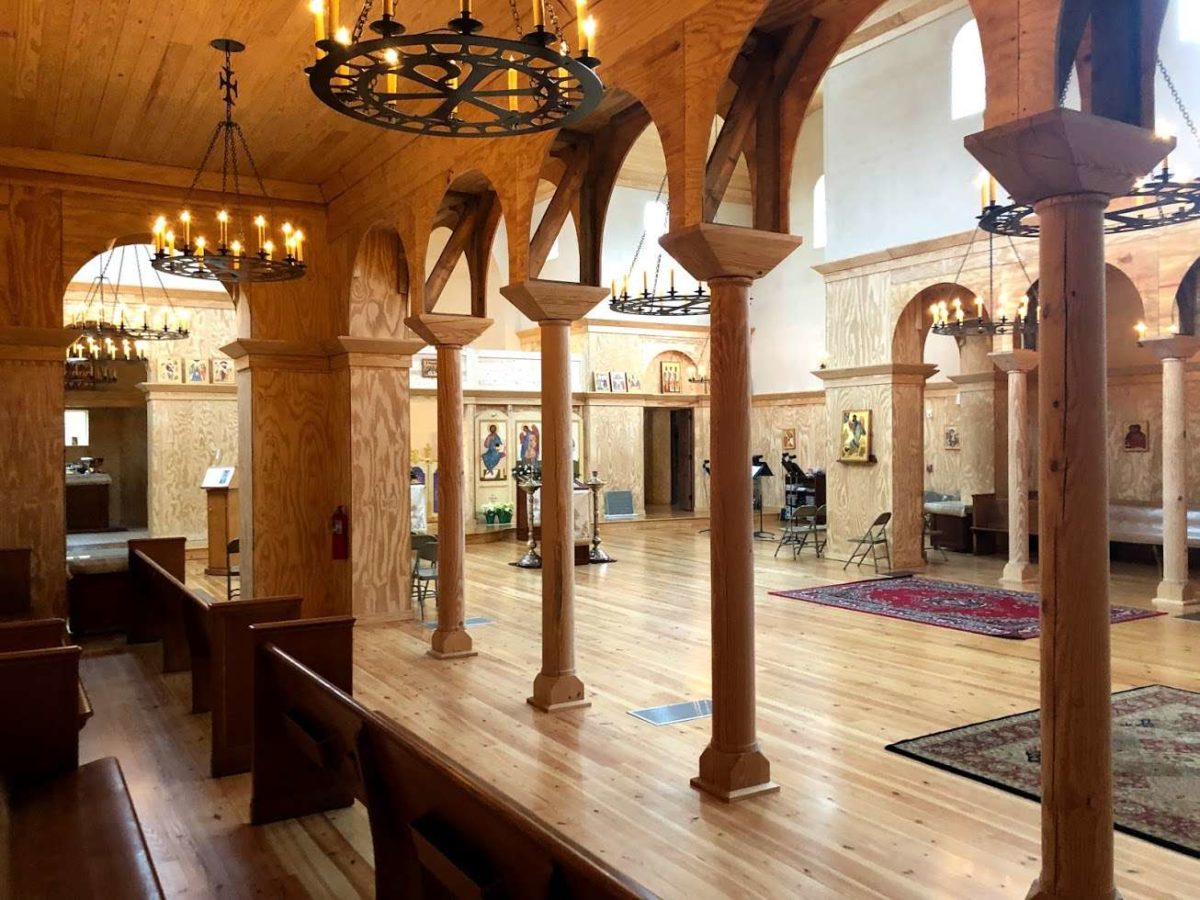 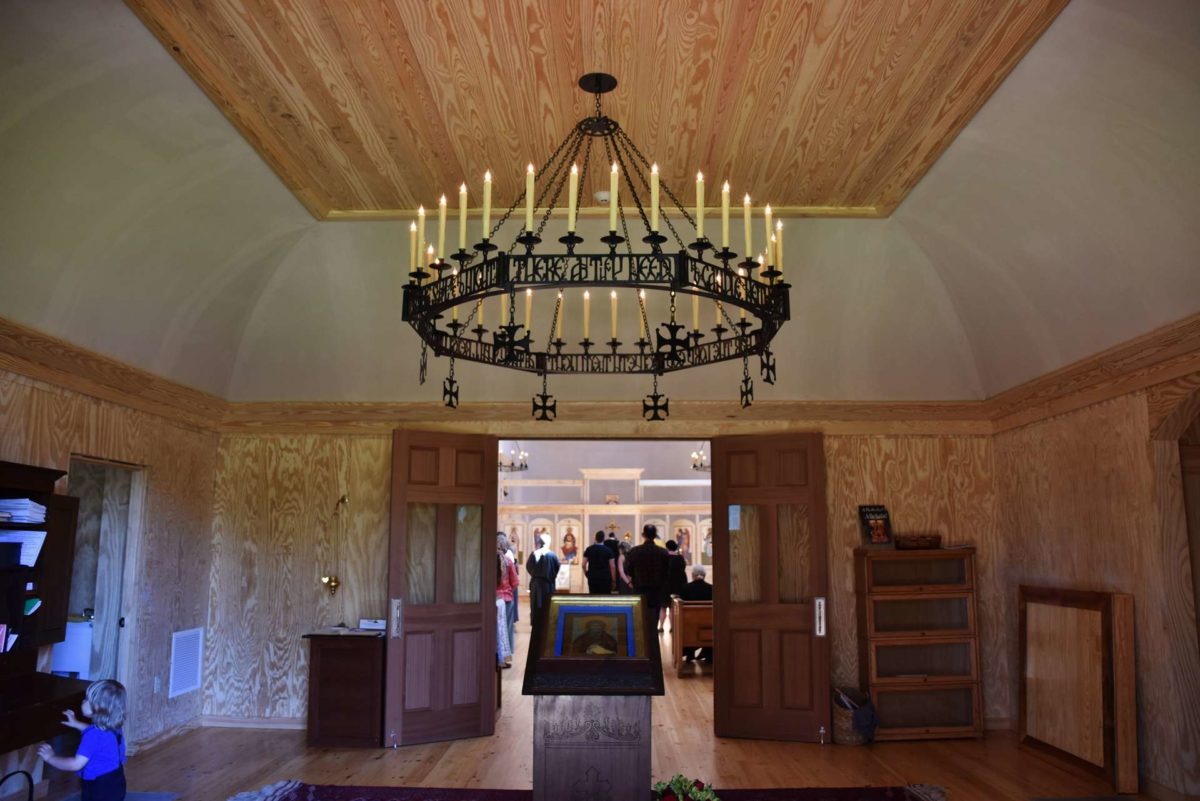 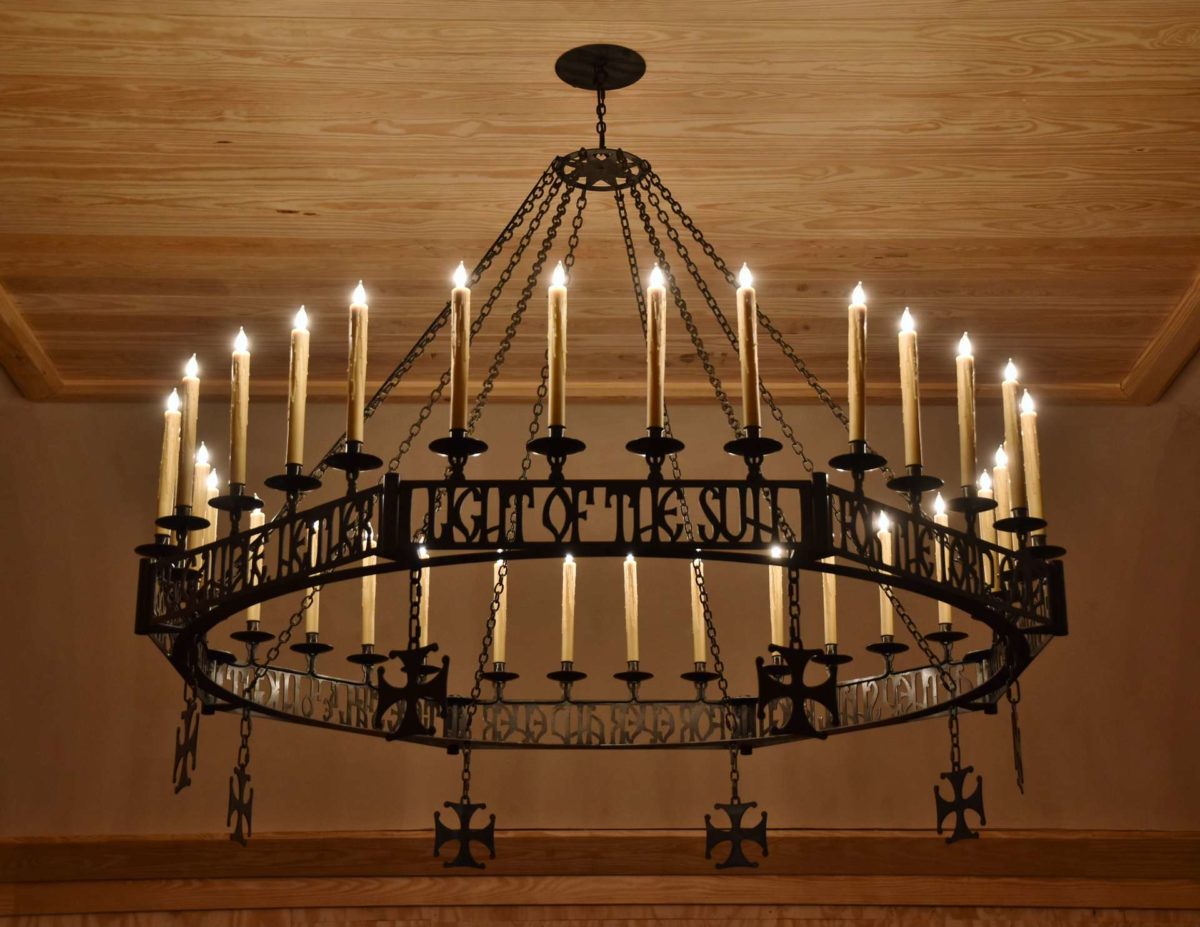 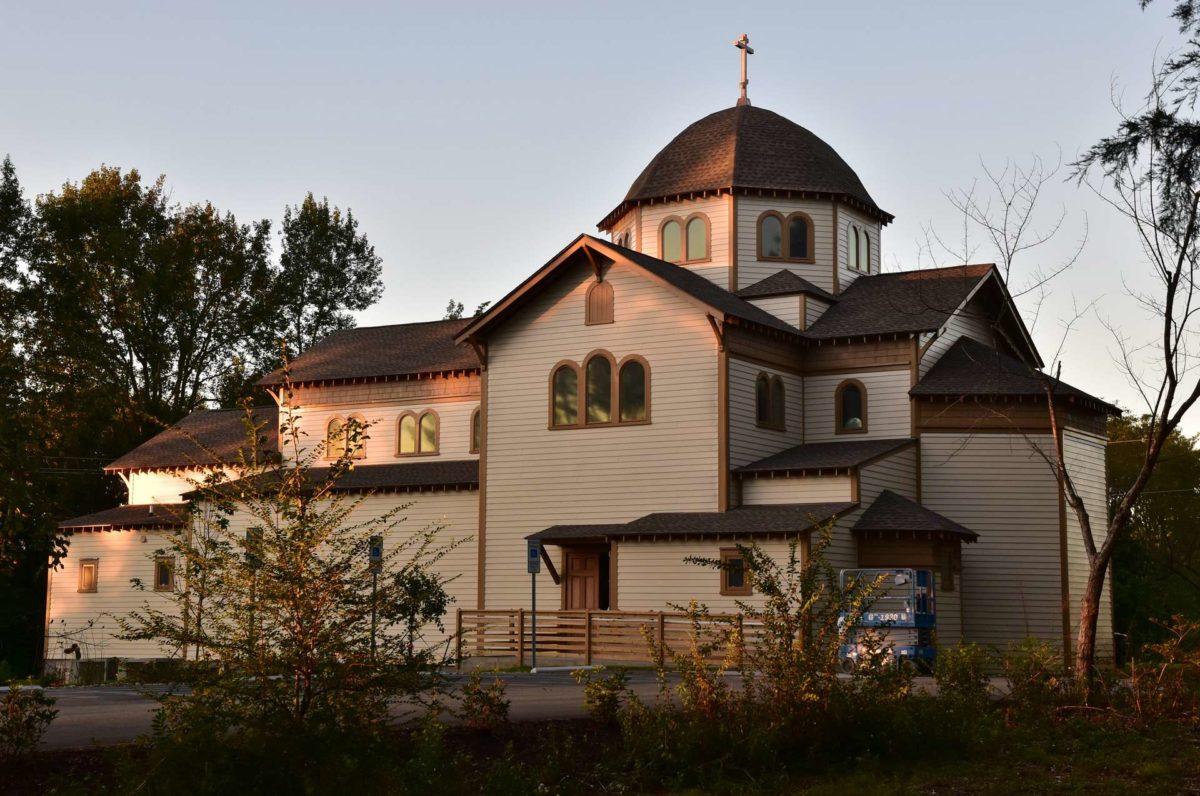 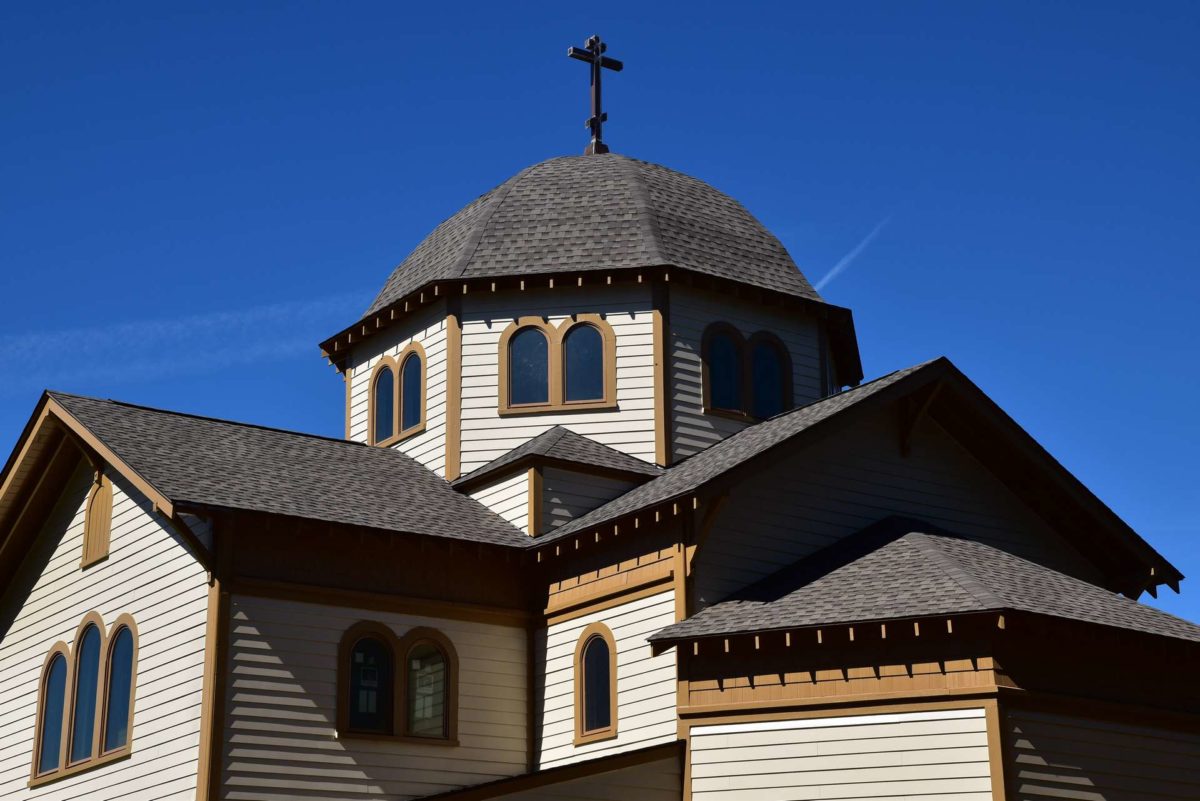