I’ve wanted to write for a while about what I’ve learned about making local colors—especially from an iconographic perspective. With this year’s harvest of indigo blue from the studio’s woad plants, I’ve taken that opportunity to do so. My hope is to ultimately create four local color articles—each inspired by one of the sources I use in my studio. Although I’ve begun these articles at their blue end, because of the timing of this year’s harvest of woad plants, I trust that those who are interested won’t mind working backwards with me.

This article is intended to be the fourth of four in its series, Local Colors of Conestoga

It seems to me that all blues are the color of the air—and this is certainly the case for woad blue. As the fall season comes to Canada, the hazy sky of summer clears and becomes a blue as deep as eternity offset by the flaming yellows and reds of the trees’ autumn leaves. It always feels to me like the sky has descended, come closer to the top of my head, and is almost within reach. Perhaps this is why  it feels so natural to create blue pigment at that time of year …

In good iconographic tradition, it’s understood that all of creation has a part in venerating God and this understanding is true in my experience for the icon’s palette. Every bit of soil, every form of animal, and every kind of plant sings, or dances, or groans (sometimes) in worship of the Creator. With the ochres from the earth and the black from animal bones offering their hues to the icon’s palette, every year with the fall’s woad harvest, the plant kingdom completes the studio colors with the addition of a beautiful blue.

When I first began using local materials to create the pigments for my icons, I began with one color—the ochre of the Conestoga River. Over the next couple of years, I added the blacks and reds I needed from other local sources and simple processes. But when the opportunity came to create an icon entirely from a local color palette, blue eluded me for some time. The geology of Southern Ontario doesn’t provide an environment for blue minerals and most plants yield dyes, which are too fleeting in their color for use in iconography. While blue may surround us in our daily lives—being as vast as the sky and the ocean itself—try to take hold of it and all you’ll be left with is a handful of air or water. 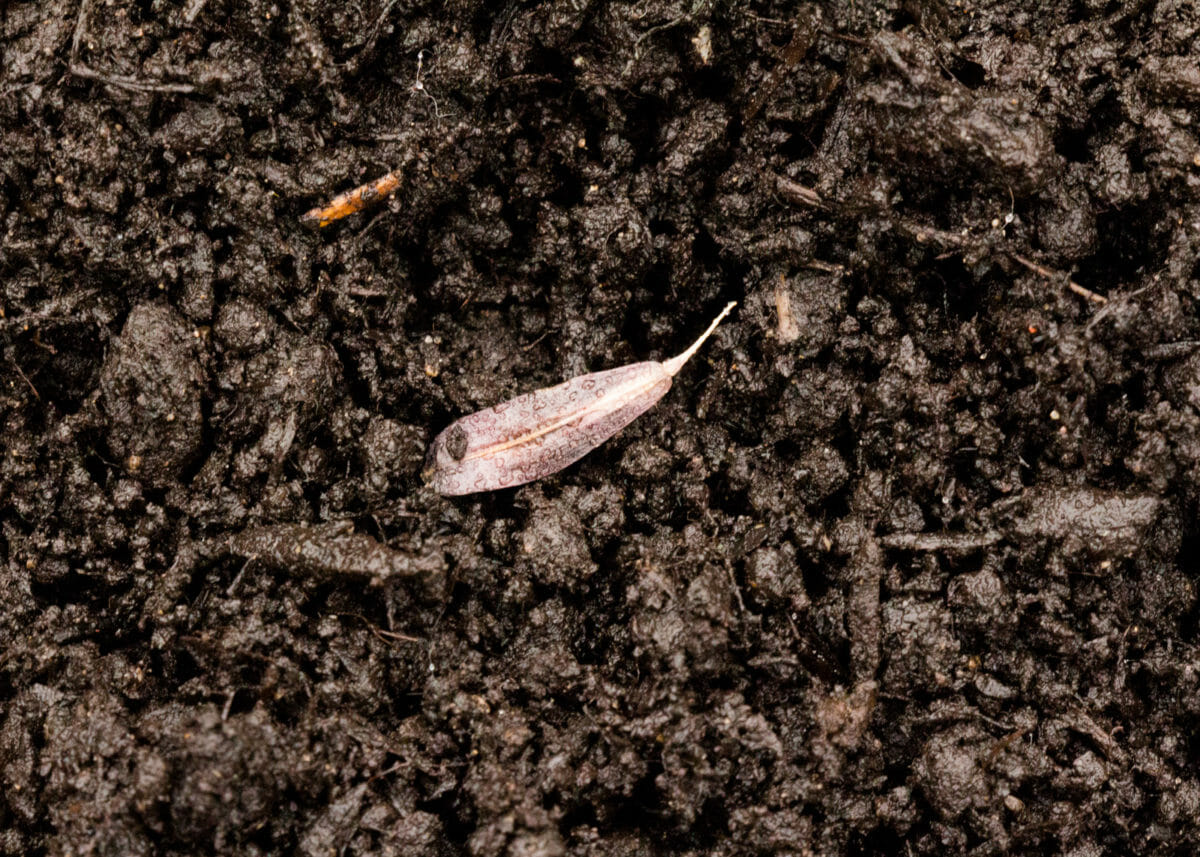 Woad seed on the earth. 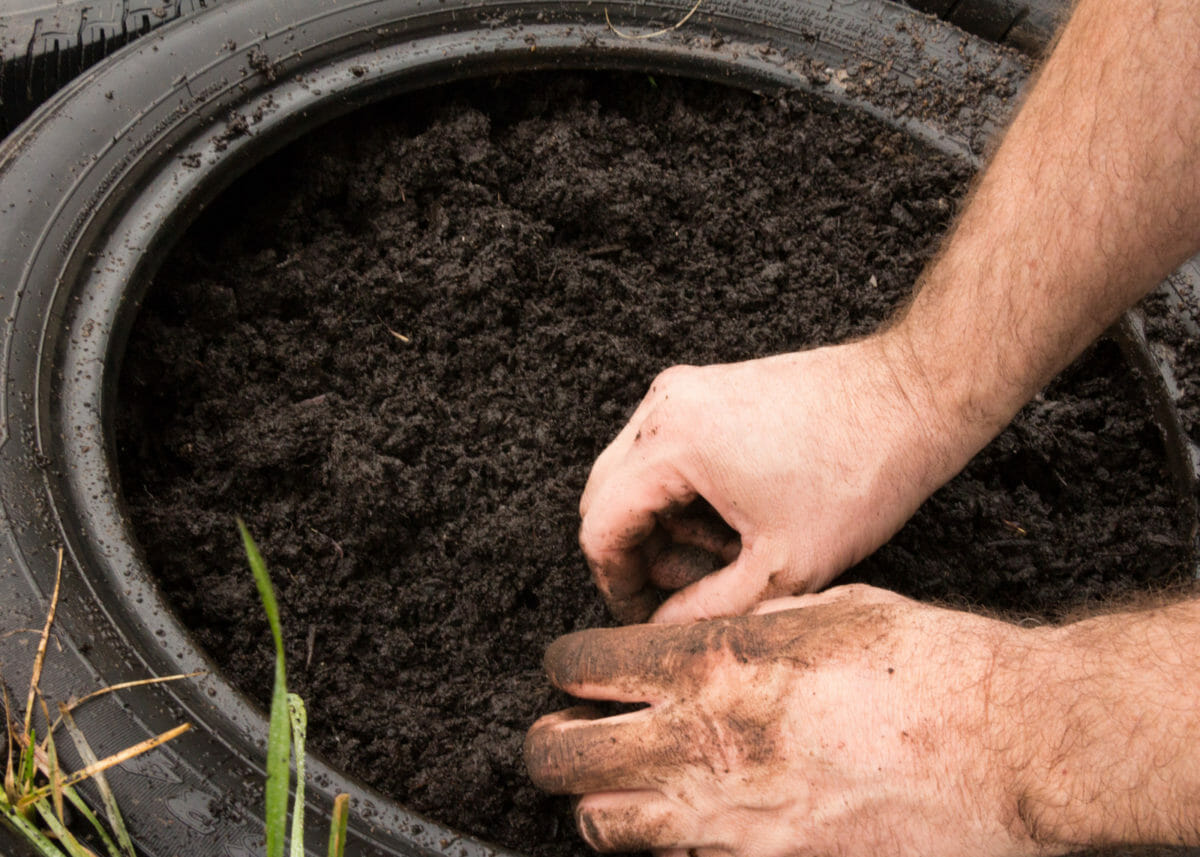 Planting woad seeds in the spring.

The answer came by way of a gift of seeds, and has continued to be a blessing every autumn since with our family’s new tradition of harvesting blue from woad plants. Mary Britain from the Cottage Gardner, an heirloom seedhouse in Ontario, and I connected about my desire to create a blue pigment in Conestoga. She generously sent me a large handful of woad seeds in the mail to encourage the effort. The woad plant is a cousin of the more famous indigo plant, which dyes everything from blue jeans to military uniforms. Both plants produce a color called indigo, but from woad it tends to be more grey rather than green (which I personally love). But unlike indigo, which needs hot seasonal temperatures to flourish, woad thrives after our cold Canadian winters and has been grown across North America for centuries.

The most surprising thing about the indigo color created from either plant is that it is a pigment, not a dye—indigo doesn’t dissolve in water, as dyes do, and is therefore a pigment. This is an unique property in colors derived from plants, and also one of the reasons why indigo can be baked into special clays and create a pigment that is both lightfast and acid-proof—a process created by the Maya peoples and used extensively in their culture. While I won’t get into those processes in this article, it is an amazing pigment to make and perhaps something worthy of documentation in the future. 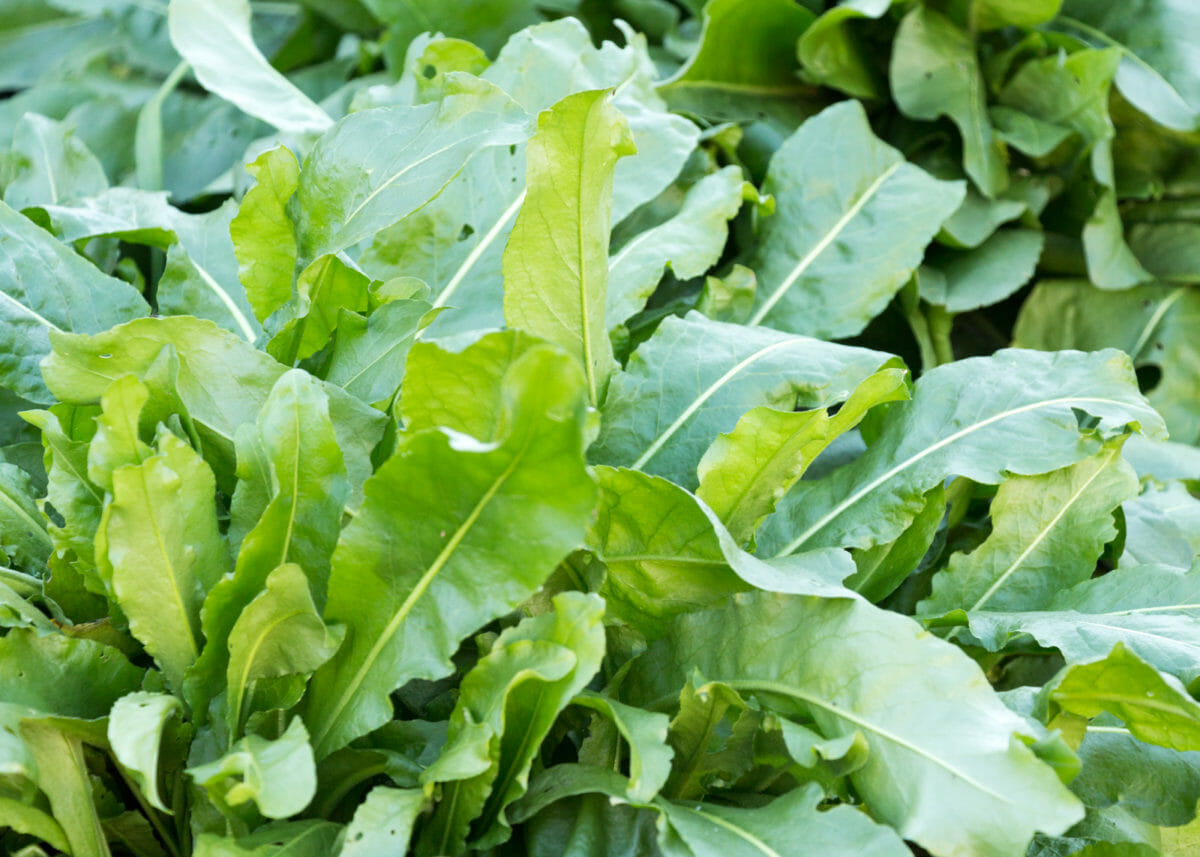 As a matter of fact, our woad harvest really began this spring, when we sowed the seeds (which you can read in a previous article, Getting Ready to Grow Woad Blue) and tended and weeded them up to our harvest, but the creation of my yearly supply of blue happens each year around this time. The plants grew very well overall, but there were also some places where the seed didn’t take, or plants were killed (mainly by the chickens escaping their yard and scratching them), and so the amount of leaves we collected wasn’t as great as some years. But, with such healthy plants to harvest, it actually turned out that the resulting amount of pigment was greater—and its color more beautiful—than previous years.

The colour of blue that comes from the woad plant is unique. Even when grown in perfect conditions, the colour from its leaves is typically a bit of a greyer blue and hints towards the green. The pigment is also greatly influenced by the soil in which it’s grown, with the resulting color being a testament to the care taken in its growing and harvesting. If there’s not enough nutrients in the soil, the yield of indigo pigment will be less, or if the woad leaves are mixed with grass, the colour will be less bright (which was once referred to in English as the woad blue being “sad”). 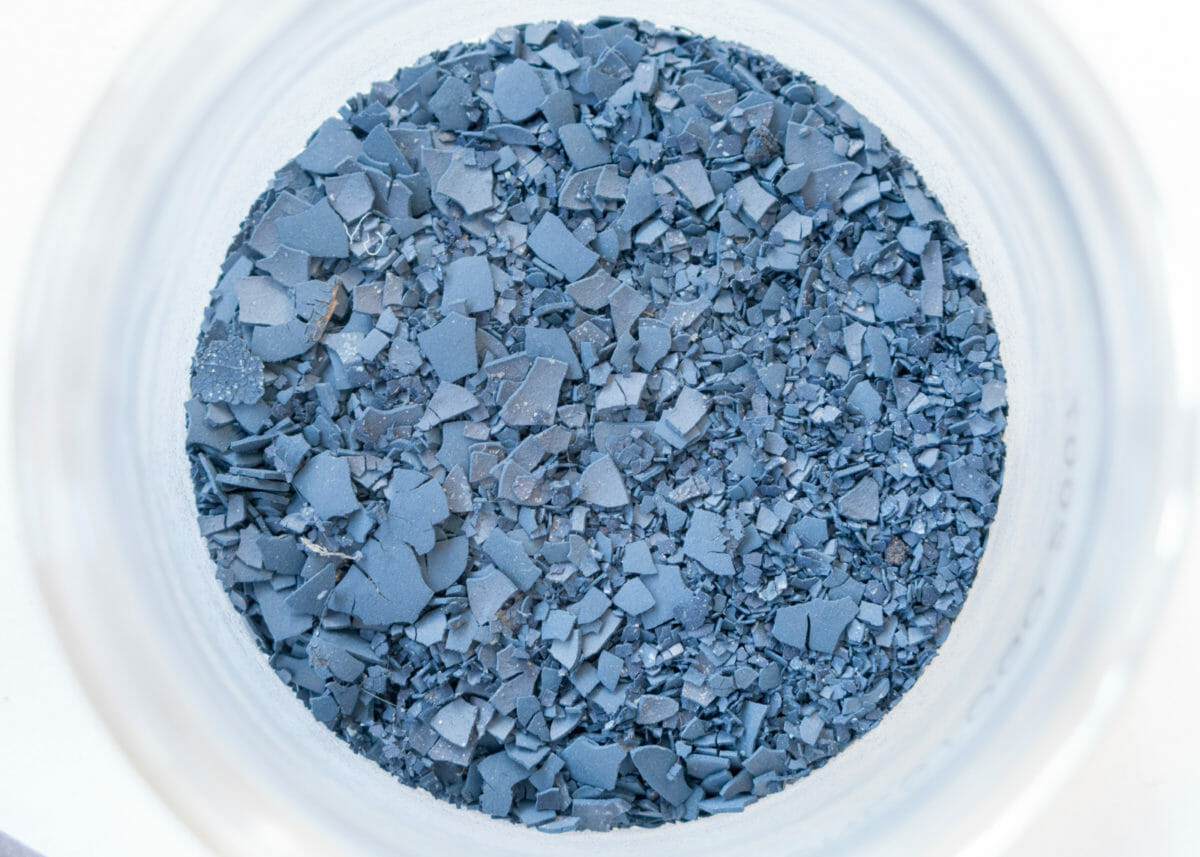 In creating the studio’s blue pigment in this way, a naturally harmonious palette is created. Since every element used to make its color comes from Conestoga, this place has formed each—giving its ochre, its plants, and its bones for color. And in doing so, the resulting color combinations are naturally resonant and beautiful. I’ve personally seen examples of this in a few ancient icons, but this is something that has roots in even more older artistic practices around the world. As Heidi Gustafson examples on her Early Futures website, “Wild pigments showcase the integrated uniqueness of place … there are hardly ever pigment foraging sites where only a single color is to be found. The idea of a ‘palette’ is very much born of individual pigment foraging sites inherently producing combinations of color.” 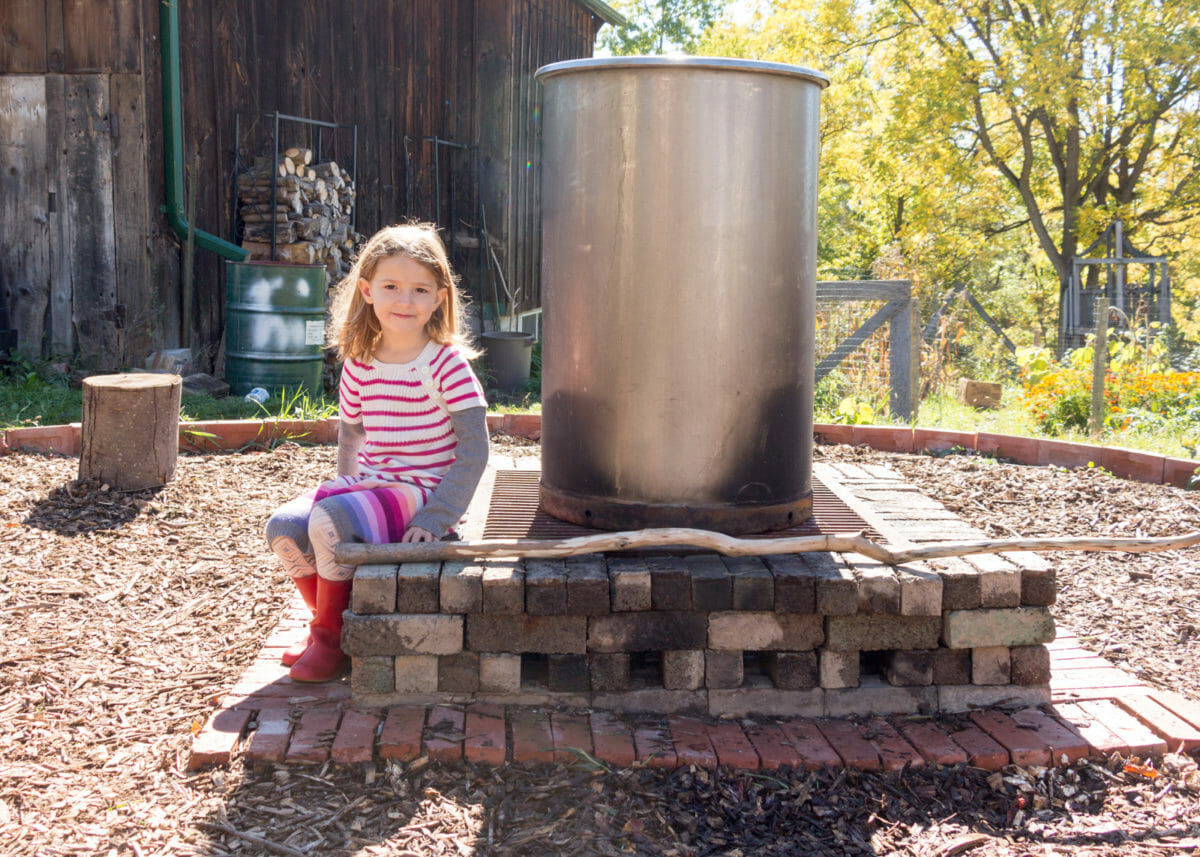 Getting ready to heat our large vat.

Creating this blue pigment is also the most constantly communal local color I create. The whole family always gets involved—from my 5-year-old to my 15-year-old—the variety of tasks allows everyone to contribute in their own way. As such, whenever I take up this blue from my shelf of pigments, I can’t help but hear and echo of the joyful noise with which it was created.

During this year’s harvesting, my family and I again worked together. We foraged woad, built roaring fires, washed piles of leaves, and watched as the air turned our mixture from green to blue. It was a long day, but one done cheerfully and with a spirit of discovery. There was a fulfilling enjoyment in the tasks—at one point during the long process of tearing the many leaves spontaneous songs even broke out! 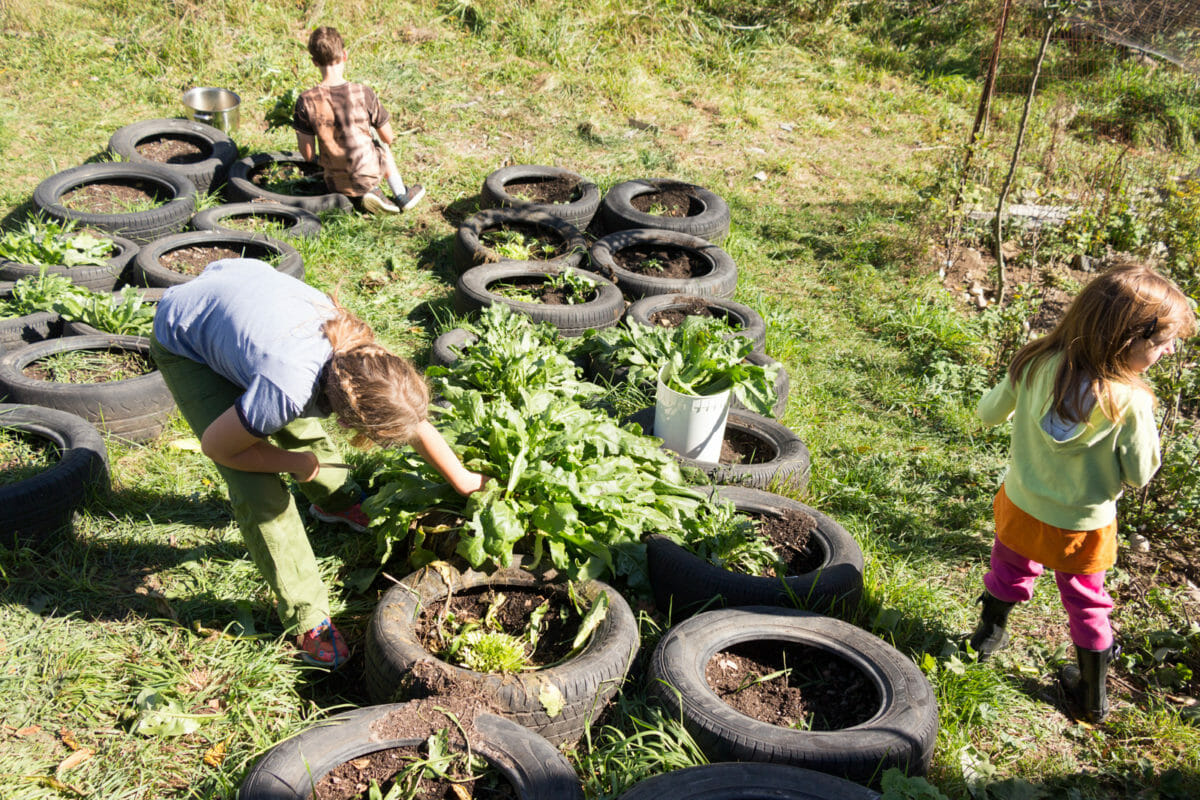 The family harvest of our woad plants. 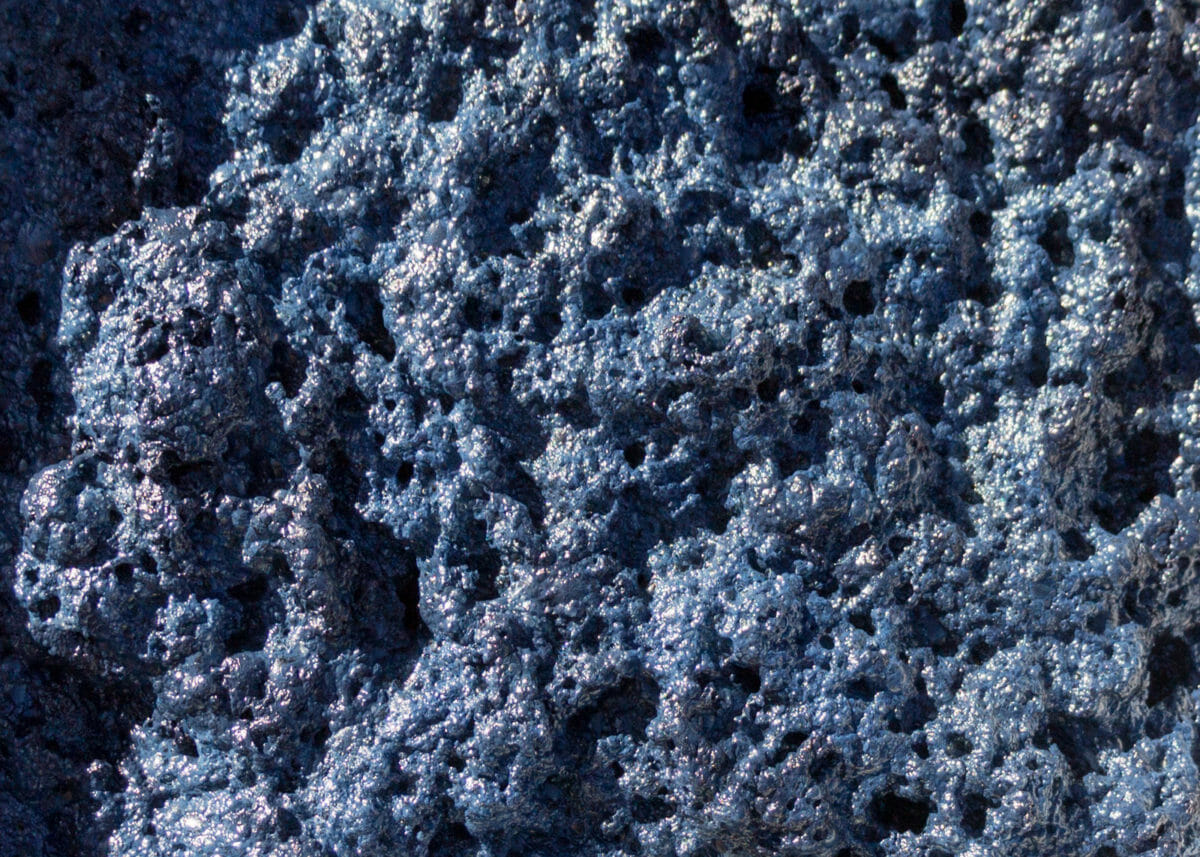 Blue foam appearing at the end of the harvest.

The process of making this color is a very rewarding one, as you can hear the video above at the moment when the blue appears. Without fail, there is always a shout of joy in this moment from everyone involved in the harvest. And, I sometimes wonder how many previous excited shouts the one at the studio echoes across time.

I once watched an interview with a Japanese indigo farmer who commented, “Because my Indigo is created with such love and attention I know that it will be a beautiful color.” It’s with the same sentiment that I know my woad blue, created with such careful efforts and joy, has a place in creating something beautiful in an icon. 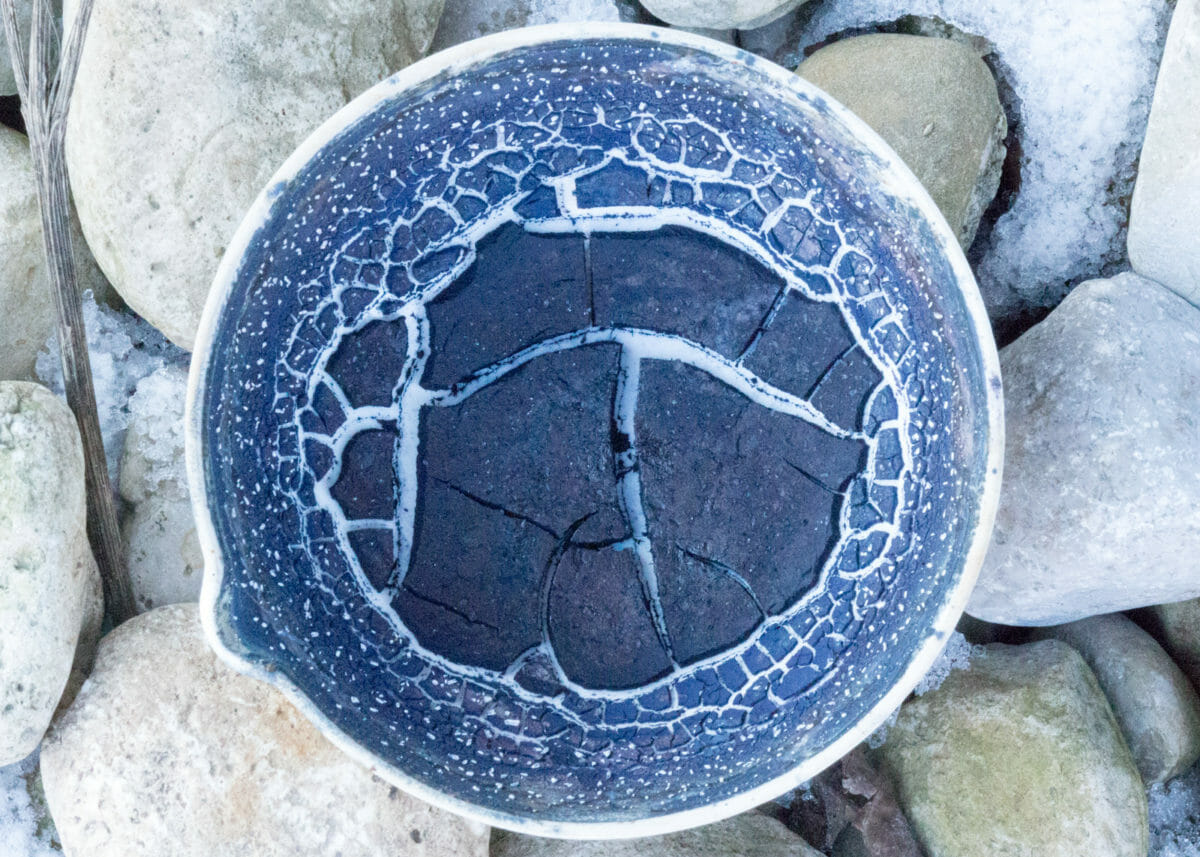 If you’re interested in trying to grow and harvest indigo pigment from woad plants yourself, please visit the Woad Blue article on my website where I outline the process in more detail.