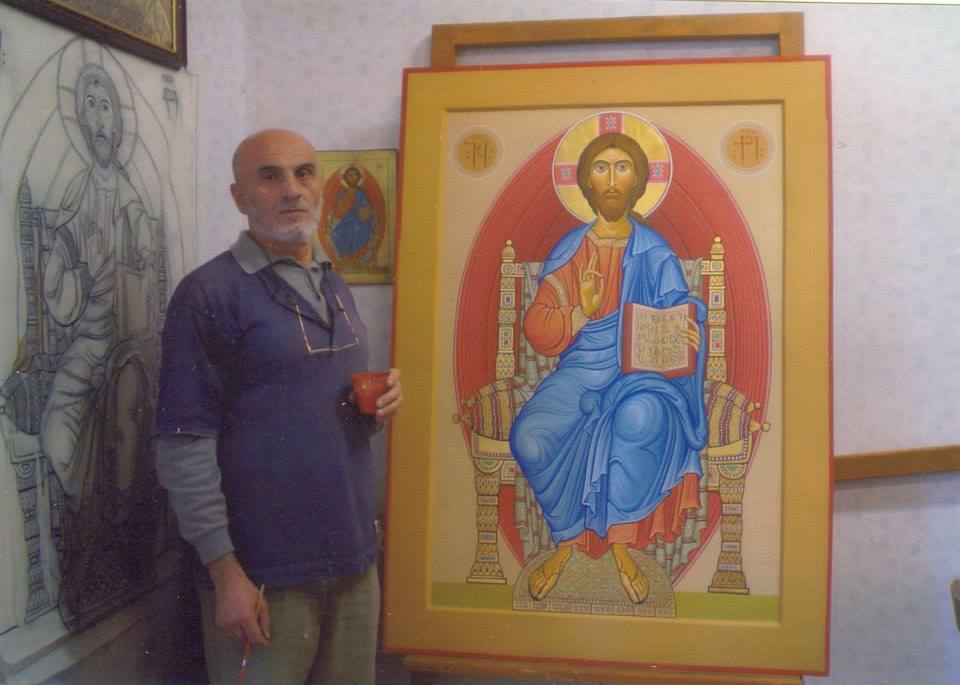 Amiran Goglidze standing next to one of his icons.

Like many of the first generation to rediscover the icon in the 20th century, Amiran Goglidze learned iconography by restoring churches. He finished art school (painting college of I. Nikoladze) in 1971, but then also continued to study restoration and conservation of monumental art (Tbilisi State Academy of Painting) from 1971-1977.  He was brought very close to the icon in that time, forced to copy and study iconography by restoring more than 50 churches in Georgia. In doing so, Goglidze internalized the particularities of Georgian iconography, the saturated colors, the linear style, and the particular blend of highly hieratic and expressive faces so characteristic to Georgia. 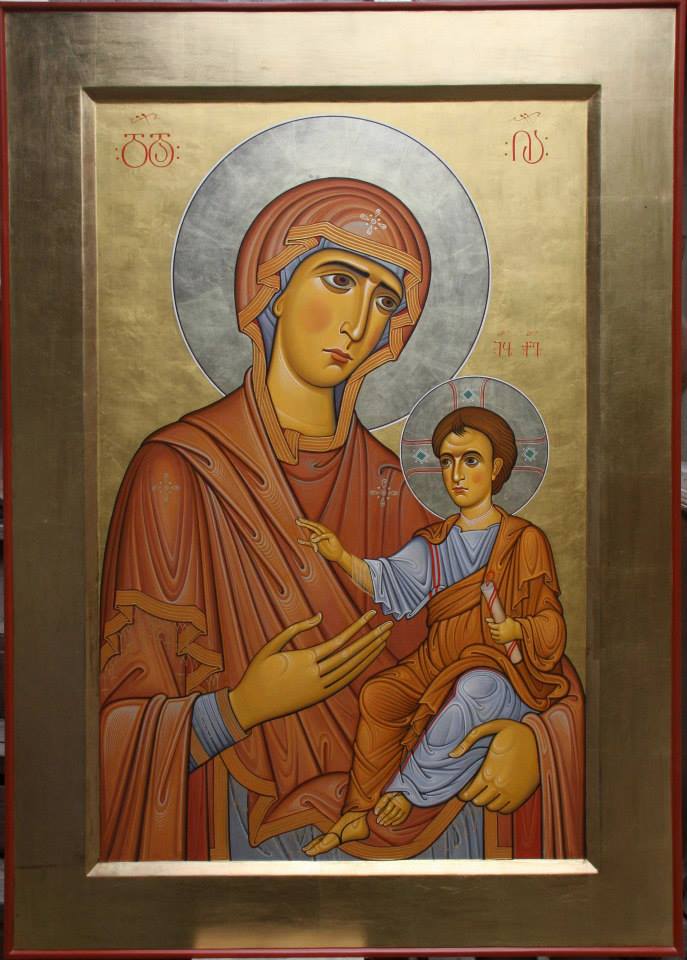 Panel icon of the Mother of God.

Goglidze also developed his own strongly linear style which obviously integrates much of the best of early Byzantine art but also seems to emphasize the specificity of Georgian art in a clear and condensed fashion.  We see this joining of worlds clearly in his clothing where he develops a type of grammar in the folds which is both very subtle and refined yet is still not afraid to isolate the sections of folds into completely “closed” shapes.  This preserves some of the most characteristic imagery we see in early Georgian repoussé, while giving it a grace and refinement that is not found in the more hieratic examples of Georgian art. 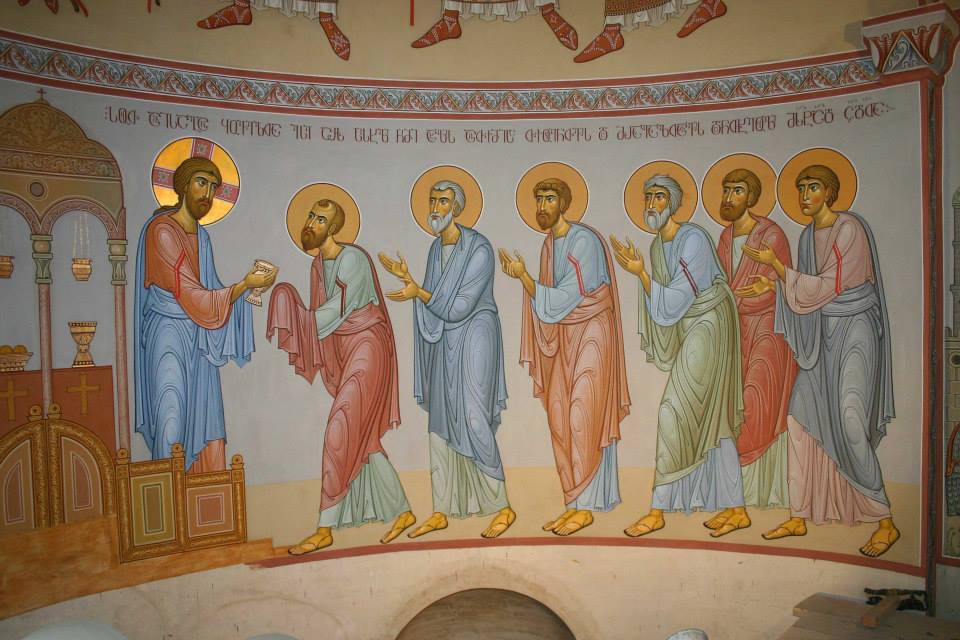 Notice the clothes in the Apostles’ clothing, how the the folds close into specific shapes.

One of the particularities of Georgian art is of course the 3/4 proportion of the eyes, where the eyes are not in the center of the head as in classical proportions, but rather at the top quarter of the head, giving an intense and particular emphasis on the eyes themselves. 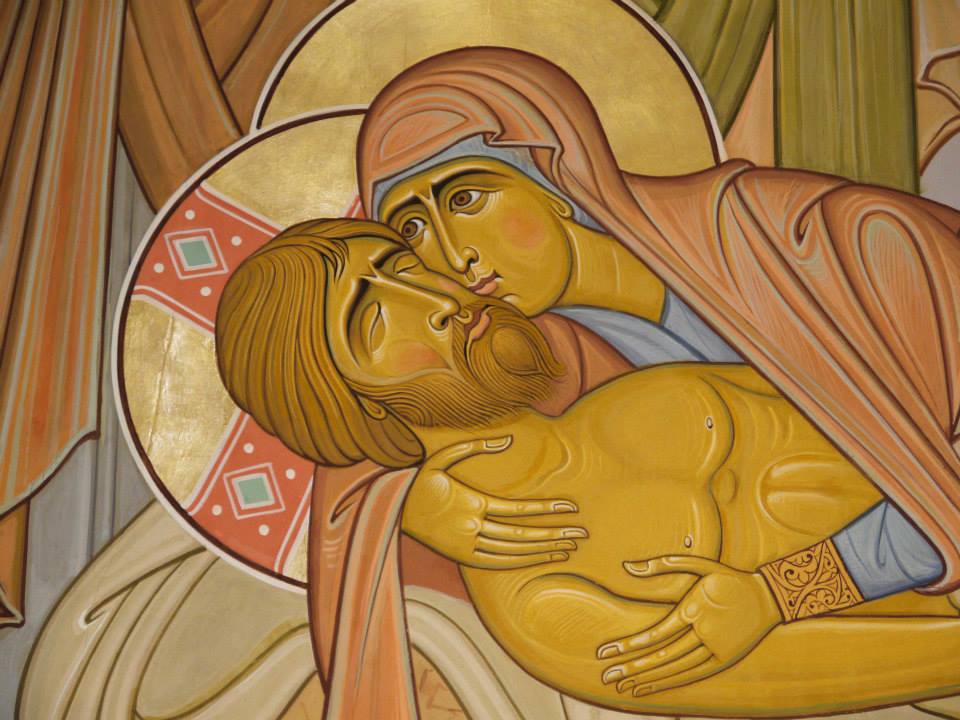 Detail of the deposition of the Christ

Having taught iconography from 1977- 1986 at the State Academy of Fine Arts it seems obvious that his approach had a large influence on the very vivid and self-aware Georgian art we are seeing today. 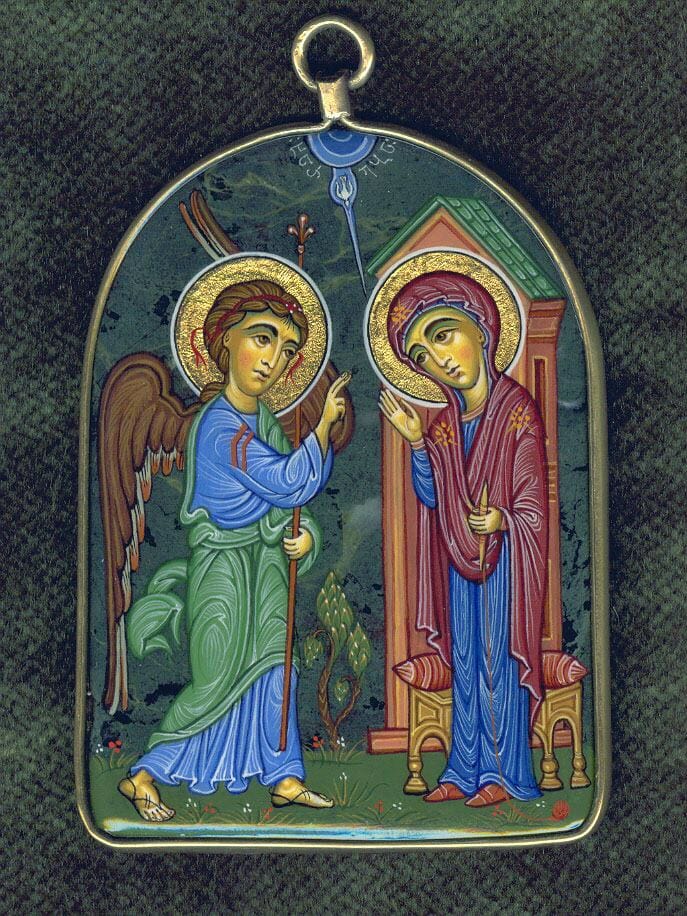 Miniature of the Annunciation painted on stone.

Goglidze worked on many churches in Georgia including the Patriarchal Cathedral in Tbilisi and was finally named the Chief artist of the Georgian Orthodox Church, an honor given to him by Patriarch of Georgia Ilia II in 2006 for Goglidze’s lifetime dedication to iconography. 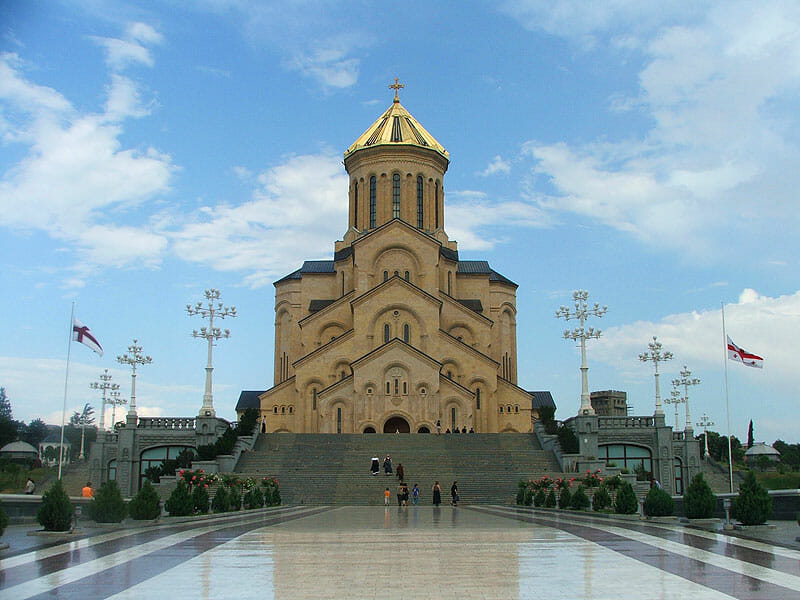 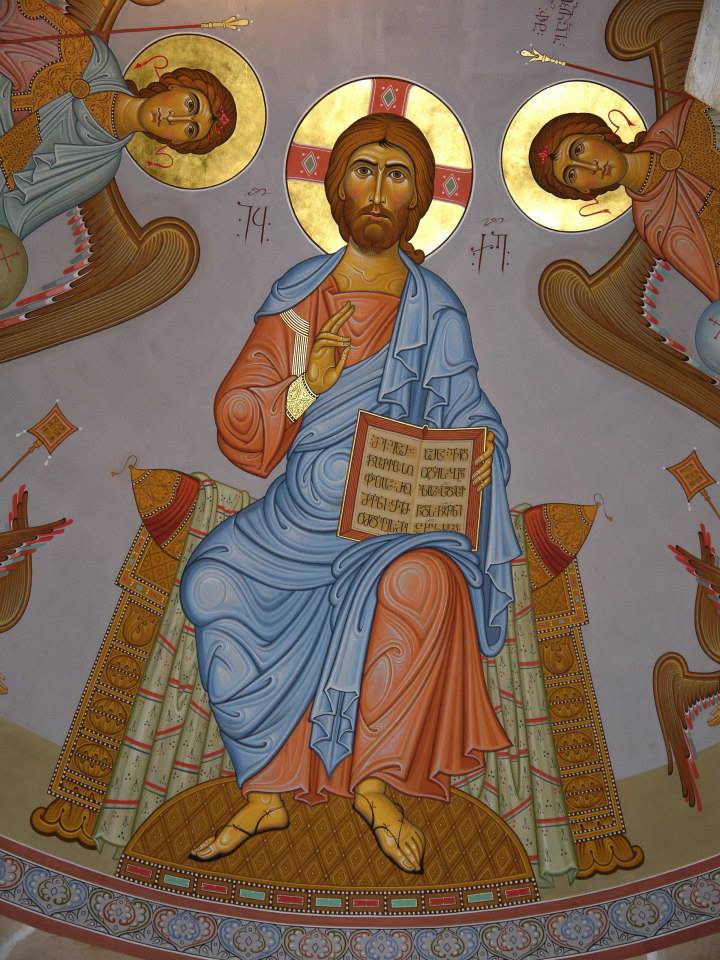 Detail of the apse in chapel of St-George within the Trinity Cathedral. 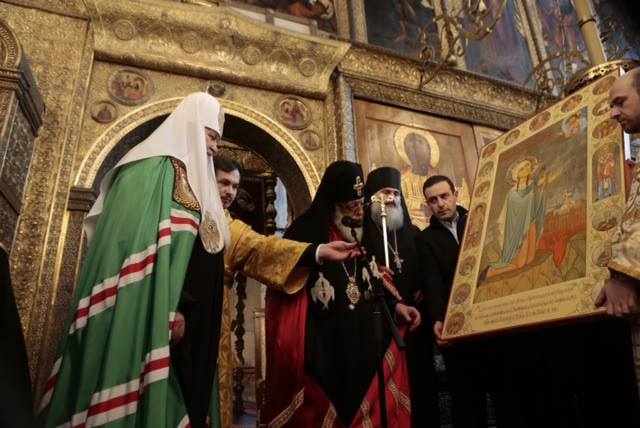 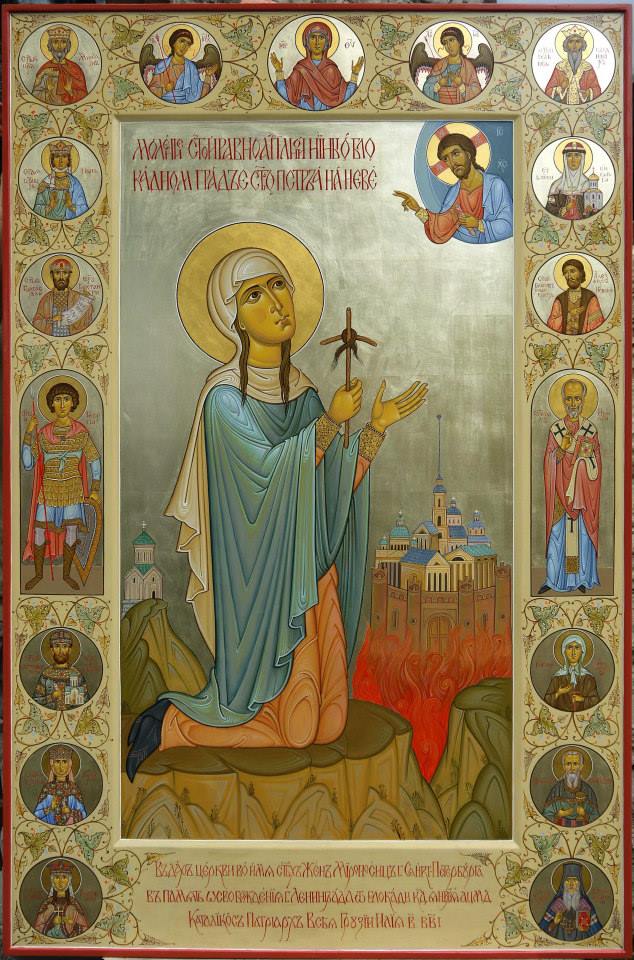 Goglidze was asked by the Vatican in 2004 to create a new icon to be used by the Pope during Easter celebrations.  The icon was made to resemble and replace the famous acheiropoieta icon, the “icon not made by hands” which is found in the Lateran Palace of Rome but has become overly repainted so that very little is left of the original image.  Goglidze says it was a great honor for him to make this icon, and was particularly surprized that the Vatican insisted he make it in the Georgian style. 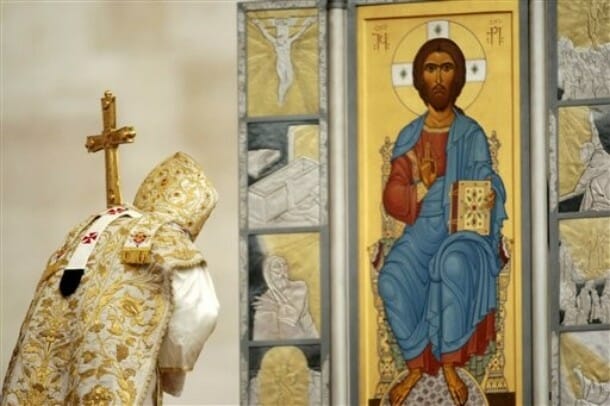 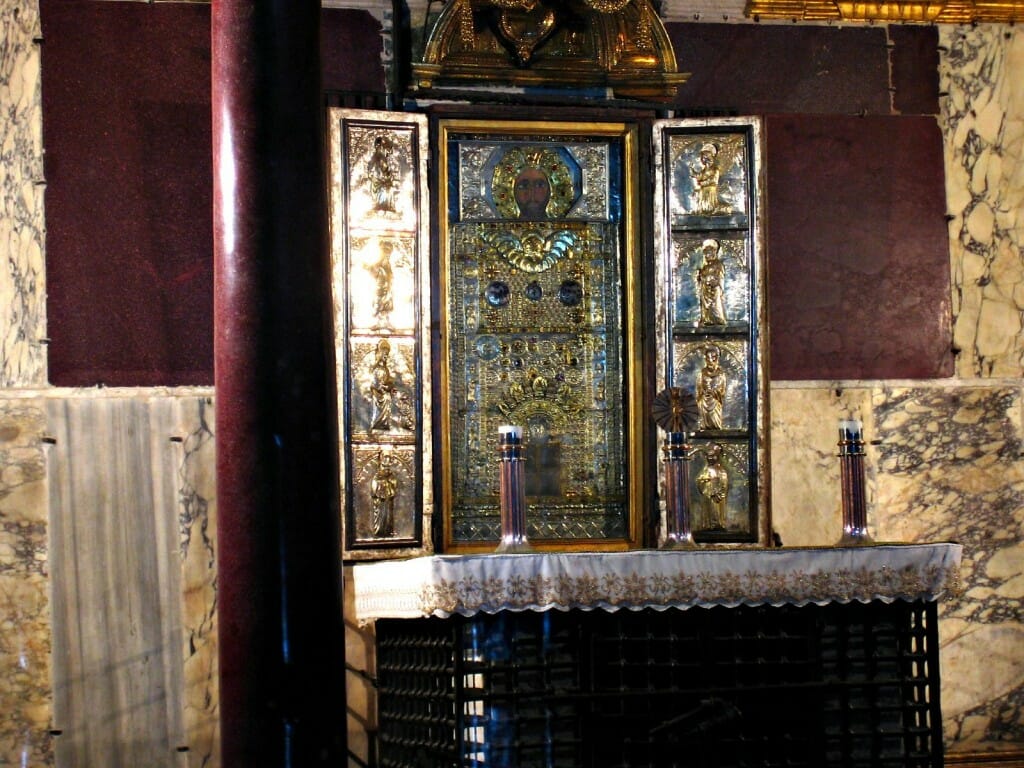 Original icon of the archeiropoieta in the Lateran palace repainted in the 12th century then gradually obscured by a riza, a baldachin, etc.

When I asked Goglidze about the state of Orthodox arts in Georgia today, his answer was bitter-sweet.  He recognizes the great effort and sacrifices of many individual artists who by their work have given Georgian art a very particular place in the Orthodox world. These artists, despite political turmoil and financial difficulty have remained faithful to the true ancient art and to the Church of Christ.  Yet through this he also perceives fragility, the fragility of economic and political relations of course, but also the fragility of Christian art all over the world in an artificial epoch that is turning away from its own traditions, its own ancient root in beauty, art and truth.

(Special thanks to Leonardo Pittore, Goglidze’s son who acted as intemediary, translator and let me use his pictures.) 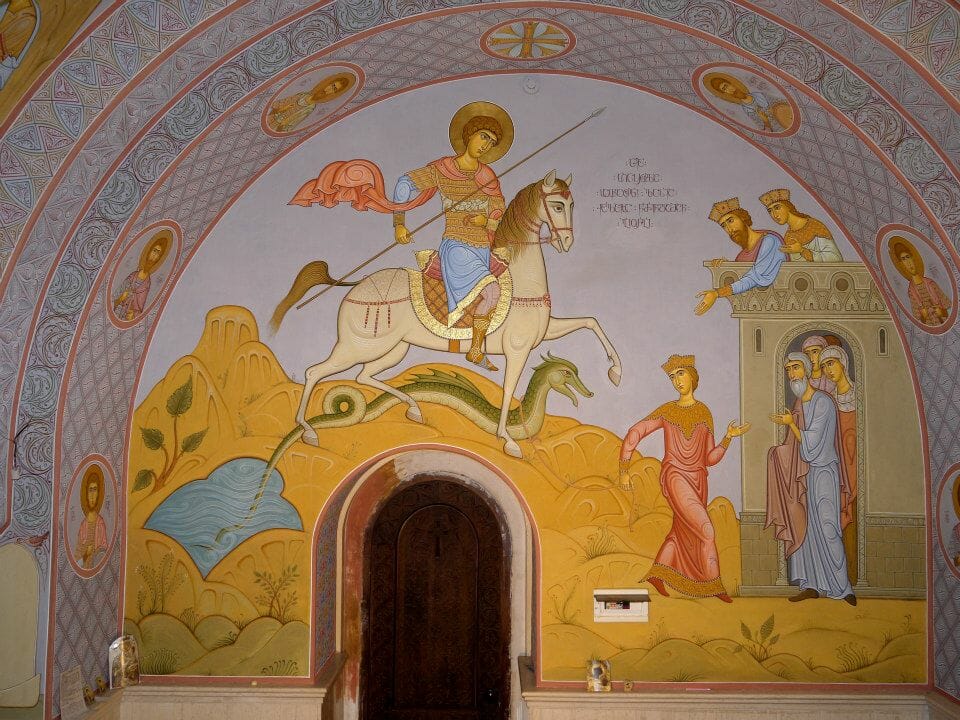 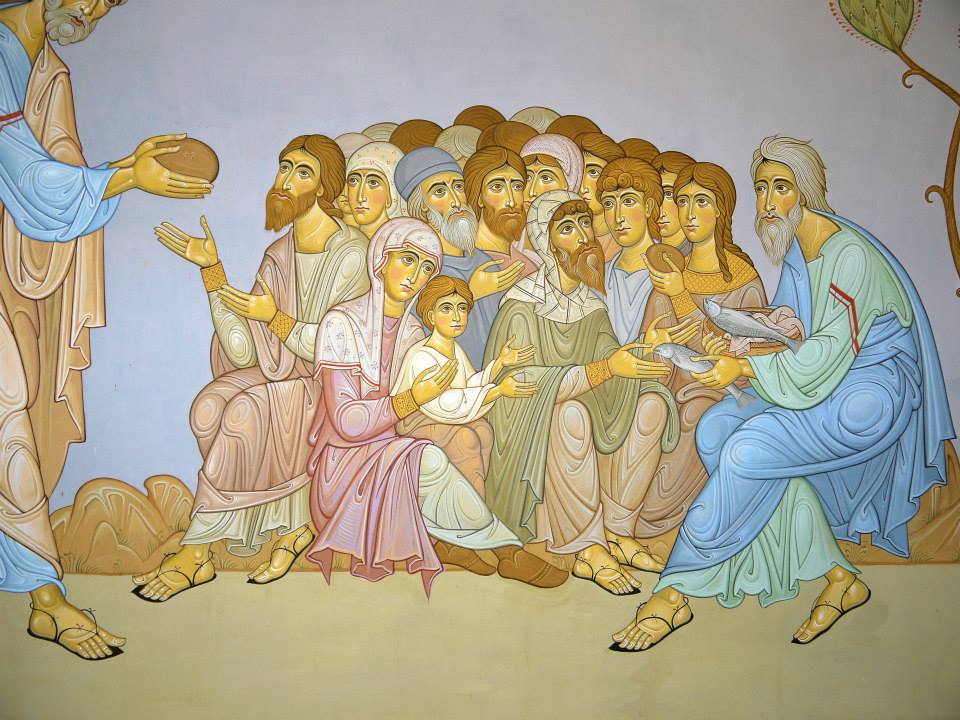 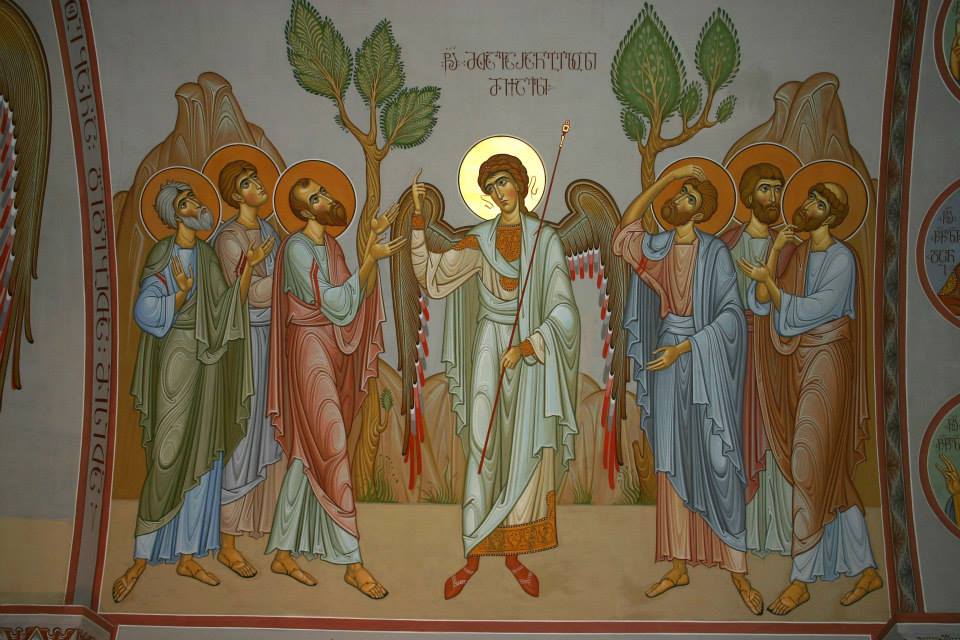 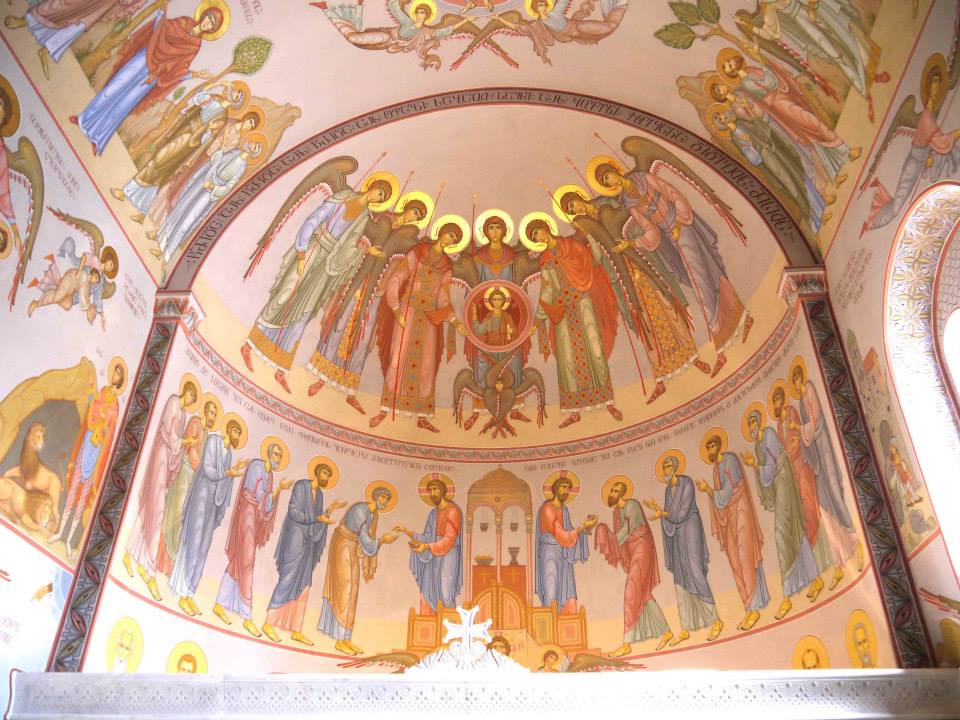 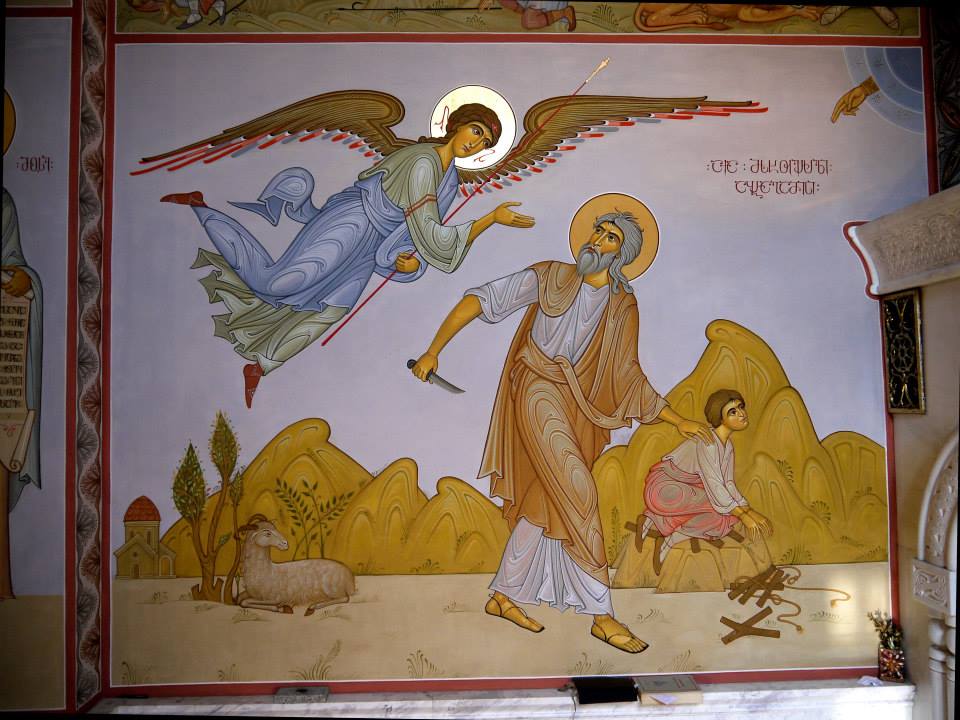 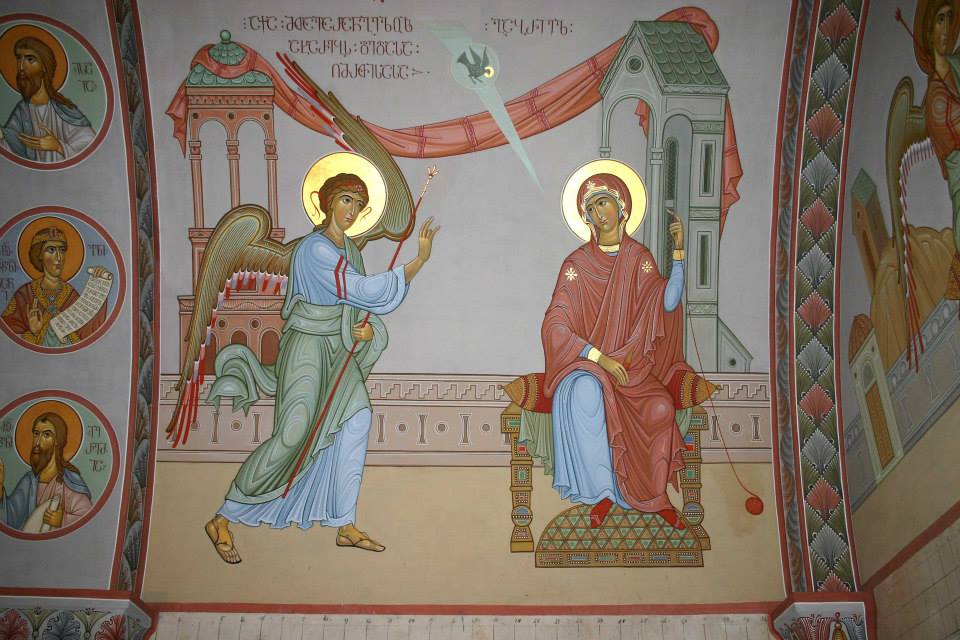 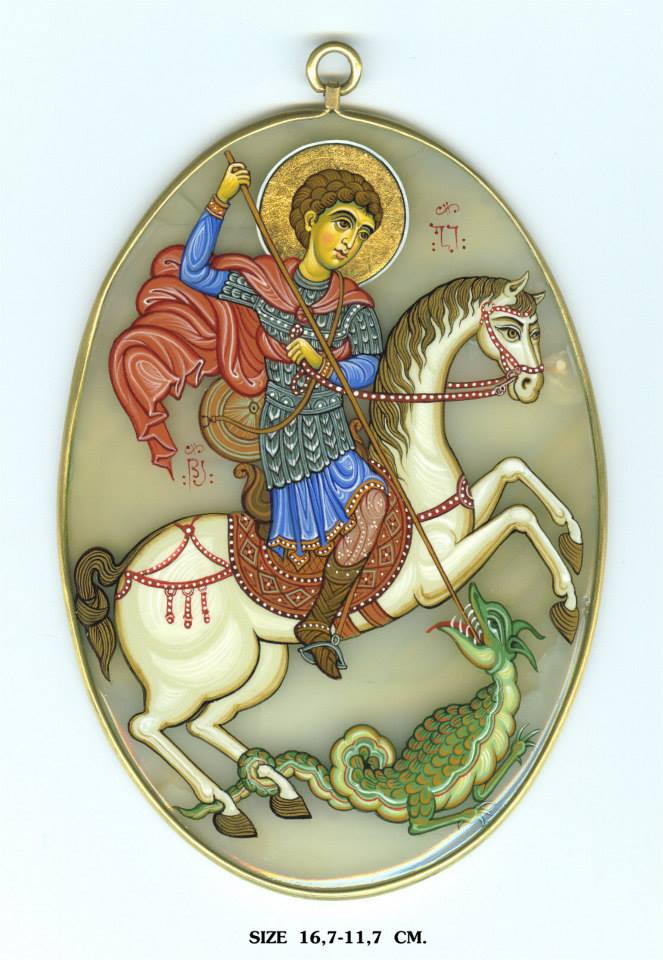 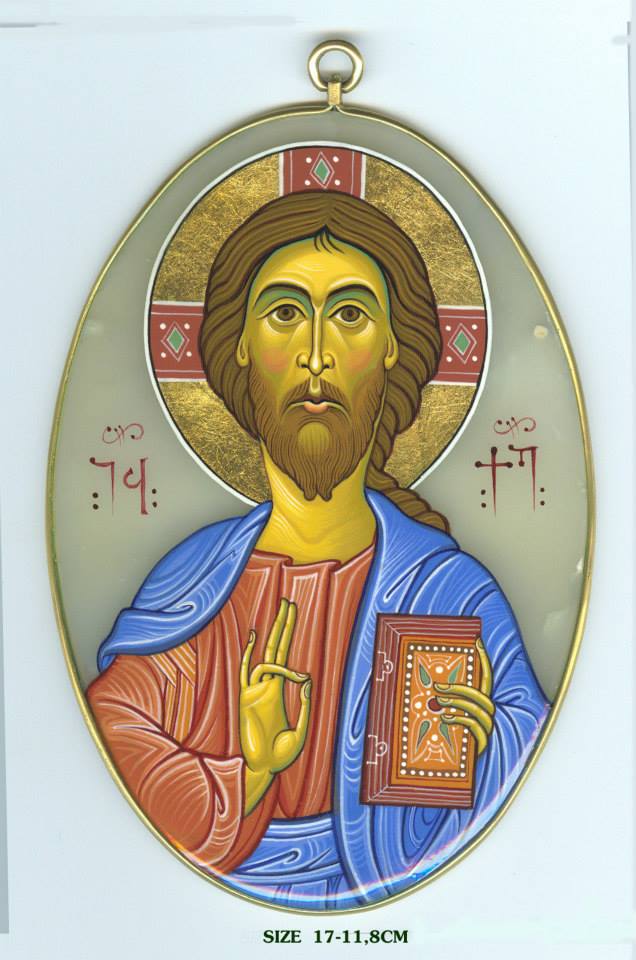