The Picture and the Frame 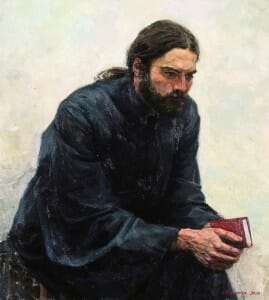 It is a curious thing that most of the earth, most of the time, is completely silent—forests, mountain ranges, deserts, prairies, glaciers, oceans, the vast expanse of the sky: all totally silent save perhaps for the call of a bird or the whistling of the wind—and yet, most of us today have difficulty passing more than a few moments of any given day without some kind of noise pressing in upon us. It has become a truism to say that we’re inundated with noise all day long. But even at night, noise surrounds us. Whether it’s the “urban soundtrack” of cars and sirens, the radio or TV left on to lull us to sleep, or merely the incessant hum of the refrigerator, we have somehow come to inhabit an environment which, unlike most of the rest of the universe, is almost completely silence-free. In such surroundings, the purposeful experience of listening to music has, for many of us, deteriorated into merely hearing another form of noise.

In his essay The Picture and the Frame, Edward T. Cone makes a crucial distinction between music to be listened to and music merely to be heard. While music merely to be heard is neither a new phenomenon nor necessarily a corrupt one—think of Handel’s numerous dance suites or Mozart’s divertimenti (a type of dinner music)—its steady rise in prominence to the point where the vast majority of music produced, recorded, marketed, and distributed over the ether is meant only to be passively heard, not actively listened to, is definitely a sign of the times. Conversely, the category of music to be listened to, while not necessarily the exclusive domain of Western “high art”—I’m thinking, for example, of the many ballads and epics in the folk music of various cultures—decidedly has in its lists some of the greatest artistic achievements of modern history in general, and of Western culture in particular. What would Western culture be, what would music be, without Bach’s Passions, Beethoven’s symphonies, Schubert’s lieder, or Verdi’s operas?

a dramatic, even theatrical event, presenting as it does an action with a beginning, a middle, and an end—hence, an action of a certain completeness within itself.

Likewise, in music, a frame is necessary. “Without such a frame,” says Cone,

the chaotic, undifferentiated flow of ordinary time will encroach on each extreme of the composition. It will prevent us at the beginning from being aware of the measure of temporal control exerted by the music, and at the end from appreciating the full discharge of its energy.

The musical frame, he concludes, is, of course, silence.

A major thrust of Cone’s essay, which was based on lectures given at Oberlin in 1967 and then published in 1968 as part of his book, Musical Form and Musical Performance, is to argue that silence around the perimeter of a work or movement—silence before the downbeat, silence after the music has died away—be considered as integral to the piece’s musical form, and, in some cases, a part of the composition itself. However, nearly half a century has passed since these words were written, and whatever alienation from that universal reality of silence that modern man had begun to experience in the late 1960s is, I contend, doubly compounded now, with the proliferation of personalized media, social media, and of media in general. Edward Cone highlights the necessity of silence for the clarity of musical form, but what if silence itself were a lost art? How would music fare—and I mean music to be listened to, or, if you will, “art music,” for lack of a better term—in a society where silence had been all but eradicated from daily life?

One need look no further than any of the various articles circulating nowadays announcing the death of classical music. Doubtless many of these claims are exaggerated, but even so, I think they point to a certain inescapable truth: we are becoming less and less inclined as a culture to actually listen to music. Do we consume music? Absolutely. And at an ever increasing rate, despite falling record company profits. But listen to music? That takes time, focus, energy, and above all, a requisite frame of silence, and I think most of us can’t be bothered.

Speaking for myself, as a conservatory graduate with a degree in composition, and now a conservatory student once again, studying conducting, I’m ashamed to admit how infrequently I actually listen to music anymore. Certainly I hear music constantly as part of my daily work as a conductor, music teacher, and music student, and I probably attend live performances of classical music more often than most people in their mid thirties do, but I honestly have trouble remembering when, in the last six months, aside from attending my children’s choral concerts, I actually sat down and attentively listened to a piece of music from beginning to end. I remember doing this constantly throughout high school and college; I remember the deep connections I forged with certain pieces at certain times in my life, listening to them many times over, and hearing them live whenever I could. Now, all that seems like a sort of dreamy and distant past.

It would be logical to assume that the mounting pressures of adult life played a role in my losing hold of a habit of focused listening, but I wonder now if busyness is really the culprit. Judging by my Amazon and Netflix queues, I still seem to have plenty of time for entertainment; and when I’m not watching movies and TV shows, my Facebook profile and my web history show no dearth of activity. I suspect the real culprit for me, and probably for many others as well, is not a lack of time, but a lack of silence. And I don’t just mean a silence of the ears, but a focusing of the attention, a quieting of the mind. This kind of attentive inner silence—what the Greek Fathers call hesychia—even more than mere aural silence, is an essential prerequisite for really listening to music—and, for that matter, for doing anything worthwhile at all—yet it is precisely this inner silence that most of us manage to completely avoid experiencing most of the time. Like a frame around a painting, and like a frame of silence around a piece of music, quieting the mind and focusing the attention acts as a frame around any fruitful human endeavor, whether it’s building a house, fixing a pipe, checking a balance sheet, or listening to someone speak. Without such a frame, our daily activities may continue—they might even be productive—but like the constant presence of music meant only to be heard in the background, our actions will inevitably become a sort of wallpaper of indefinitely repeating patterns, lacking any discernible beginning, middle, or end, save for those moments of punctuation that life imposes on us of its own accord.