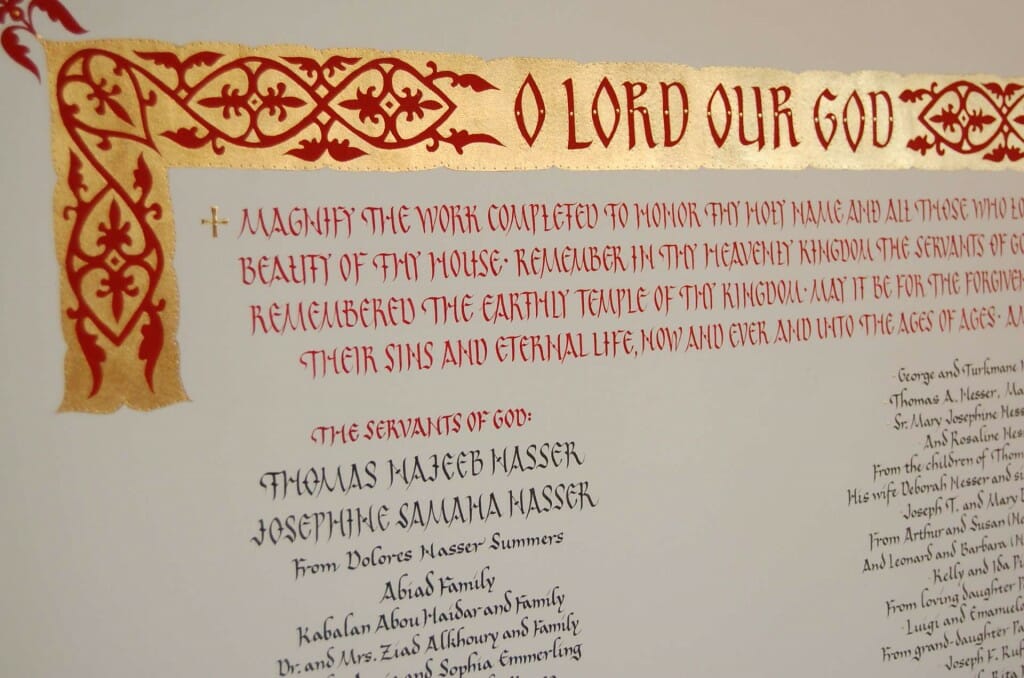 I would like to describe an especially challenging recent project, in which I had the honor to collaborate with a master calligrapher. I was asked to create a pair of memorial plaques flanking an icon. The purpose was to commemorate donors who contributed to two separate capital campaigns benefitting Saint Nicholas Melkite Church, in Rochester, NY.

The challenges were several. The first was the very lengthy list of names – too many to reasonably carve in a wooden plaque. And the budget did not allow for an enormous architectural construction. It would have to be a simple affair hung on the wall. After considering the cost and aesthetics of the many options, I suggested that the names might be written on paper by a calligrapher, and mounted in wooden frames with glass. The client agreed to this, and I set about designing the ensemble. In order to make the set coordinate, I decided to frame the two plaques and the icon (commissioned separately by the parish) in matching frames. 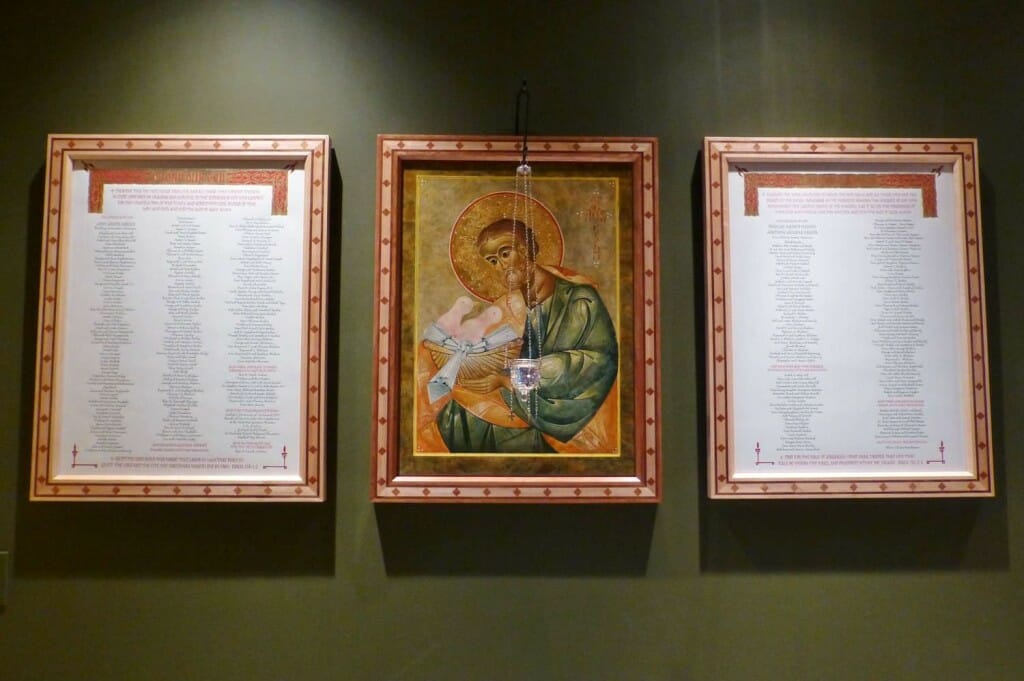 The second challenge was the text. The client provided me a text that I found quite problematic. It specified the nature of each gift and seemed awkward in that some gifts were much more significant than others. The donors included a mixture of individuals, families, businesses, and other institutions. It seemed like a suitable record for the books in the parish office, but I could not think why it would be appropriate, from a liturgical standpoint, to display such a text in church, flanking an icon.

I recommended to the priest that the text be completely rewritten. I told him that it should be structured as a prayer in the traditional form of a litany. All reference to the gifts themselves should be removed, and the list of names should be introduced with a prayer. And the different categories of donors should be introduced separately, just as in the litanies in the divine services. We worked together to accomplish this, and developed a text that is poetic and edifying to read. 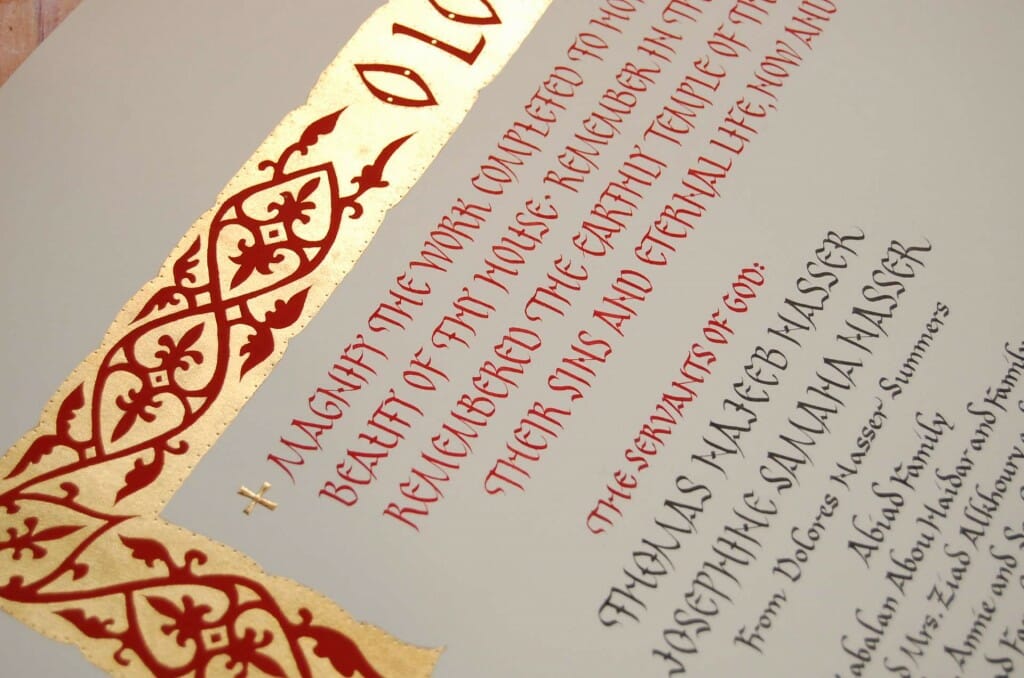 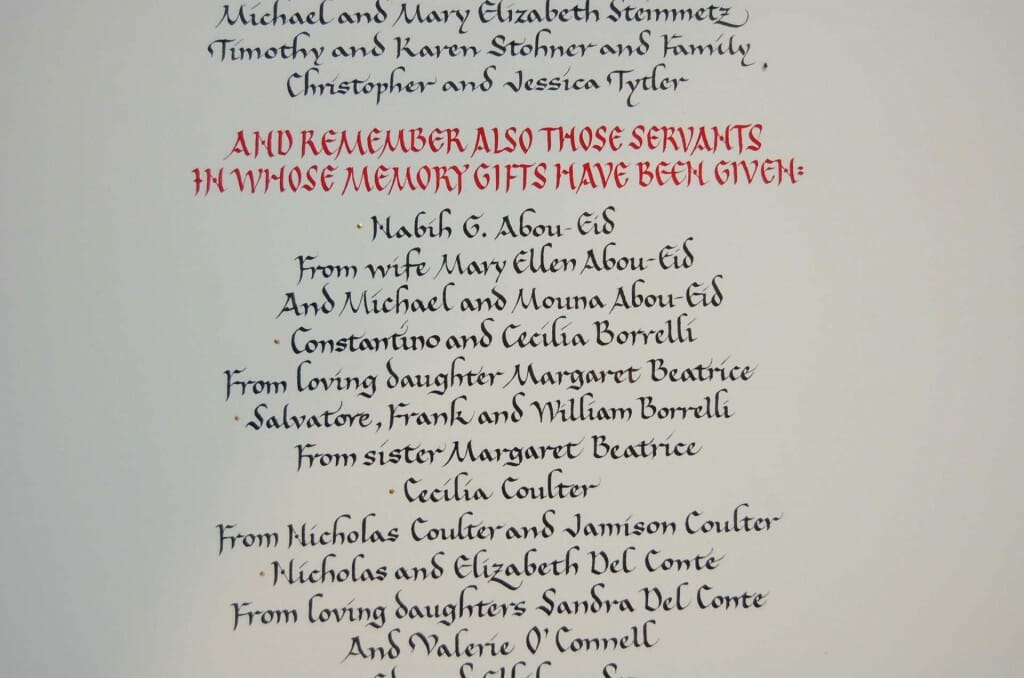 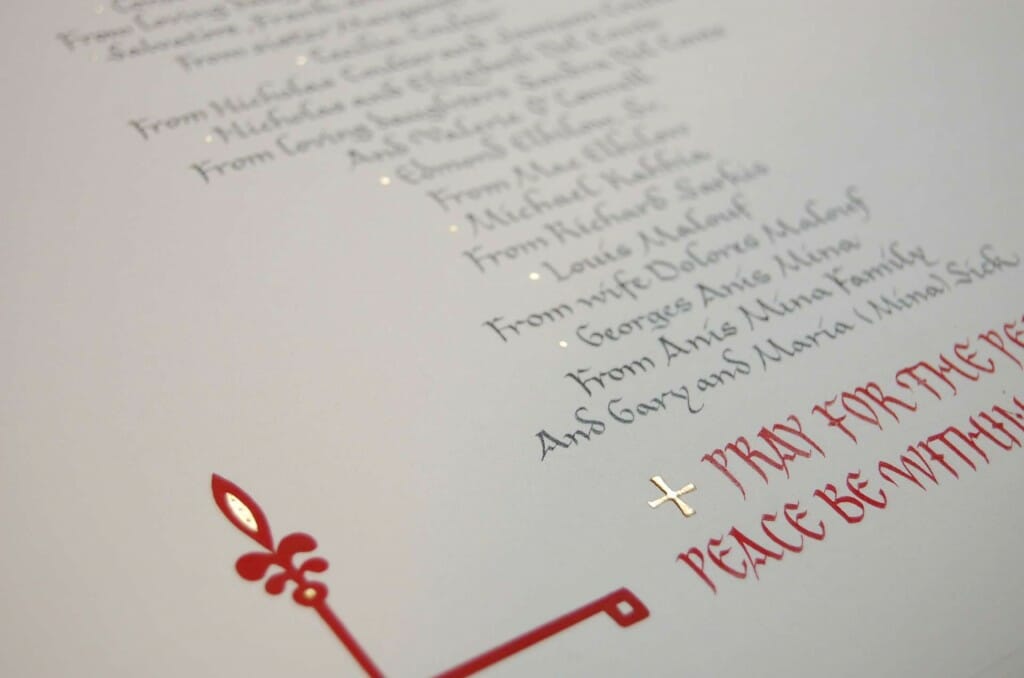 I contacted master calligrapher Georgia Angelopoulos, based in Victoria, BC. Georgia is a specialist at calligraphy in Greek, and is highly familiar with Byzantine lettering. Working in Canada, she is also experienced with the elegant calligraphic awards and memorials that are traditional in the British Commonwealth and the Anglican Church. This was exactly the combination of skills needed here. I asked Georgia to develop a style of calligraphy for these plaques that would unite the tradition of British heraldic awards (the pinnacle of elegance for formal writing in the English language) with the ethos of Byzantine lettering and ornament.

Georgia rose to the challenge admirably. Her lettering references the beauty of Byzantine script, but seems comfortable and natural with the English language. And her ornamentation, in red and raised gold, has a splendid dignity and formality. The actual task of writing the names was monumental. The paper, at 25 x 33 inches, is enormous for a calligrapher, and the list of names exceedingly long. 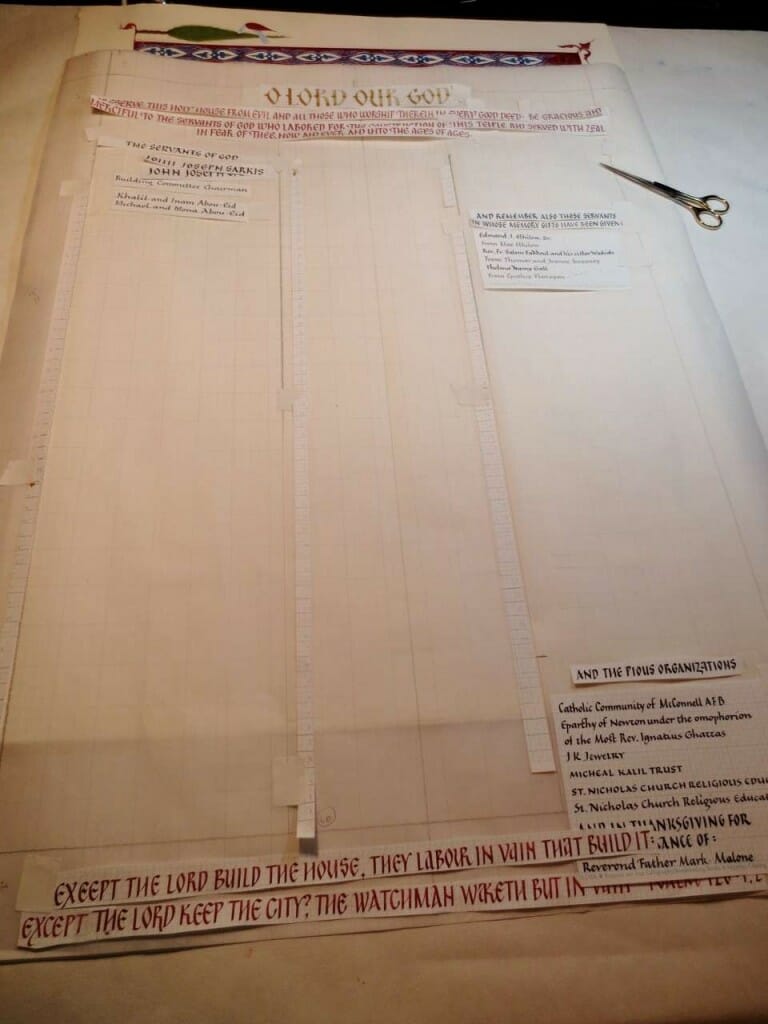 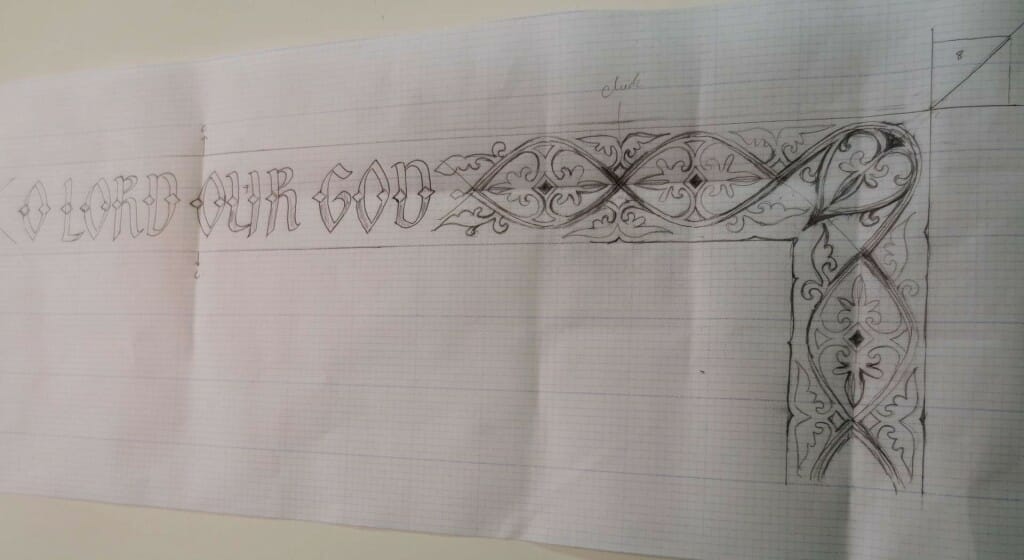 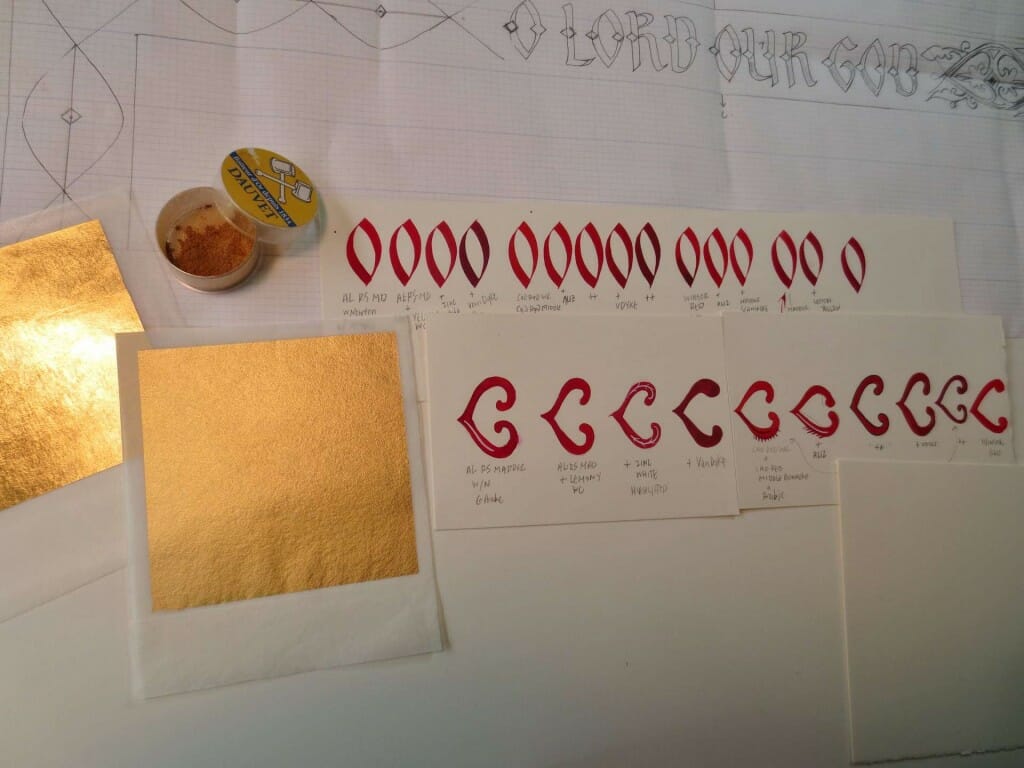 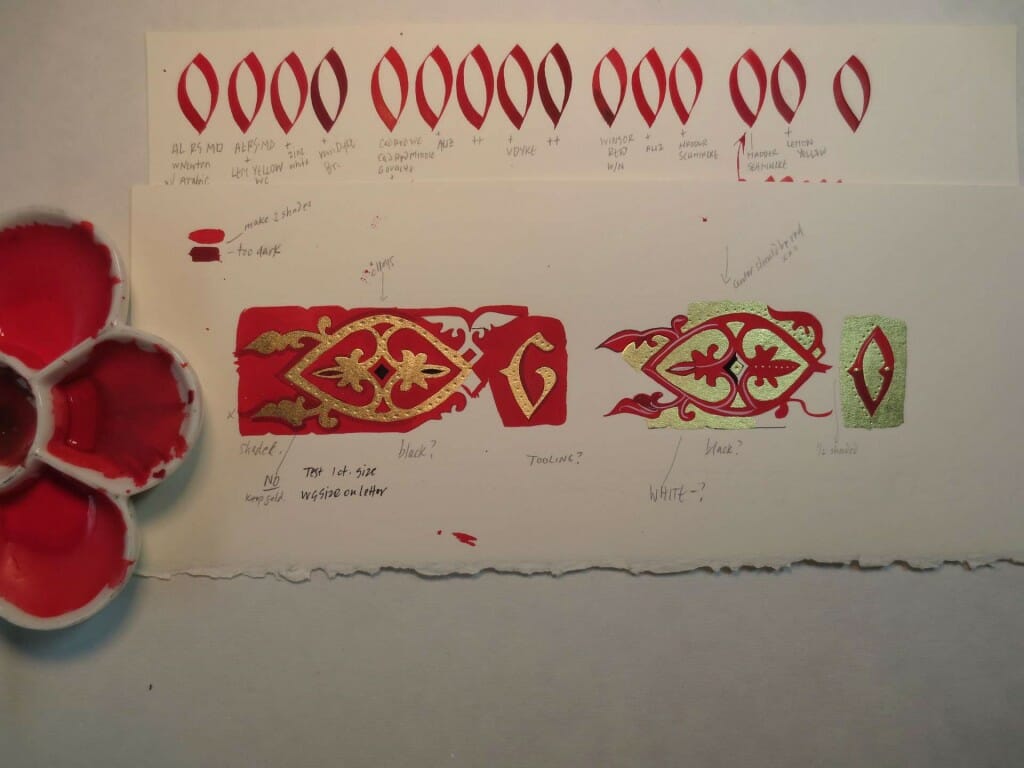 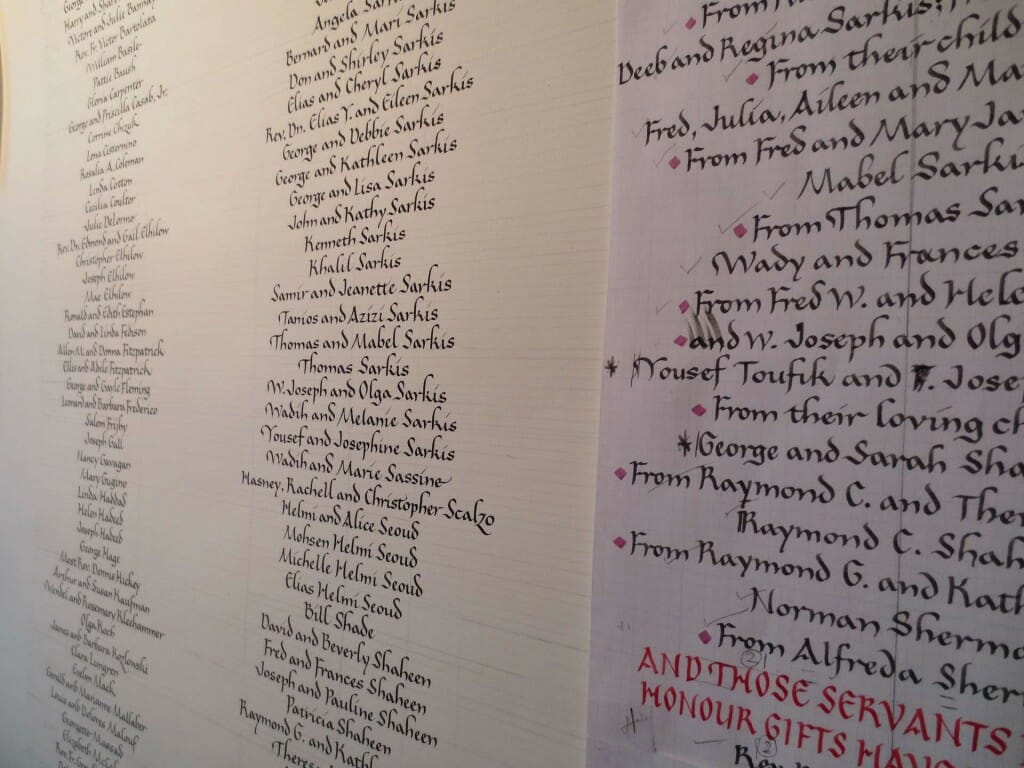 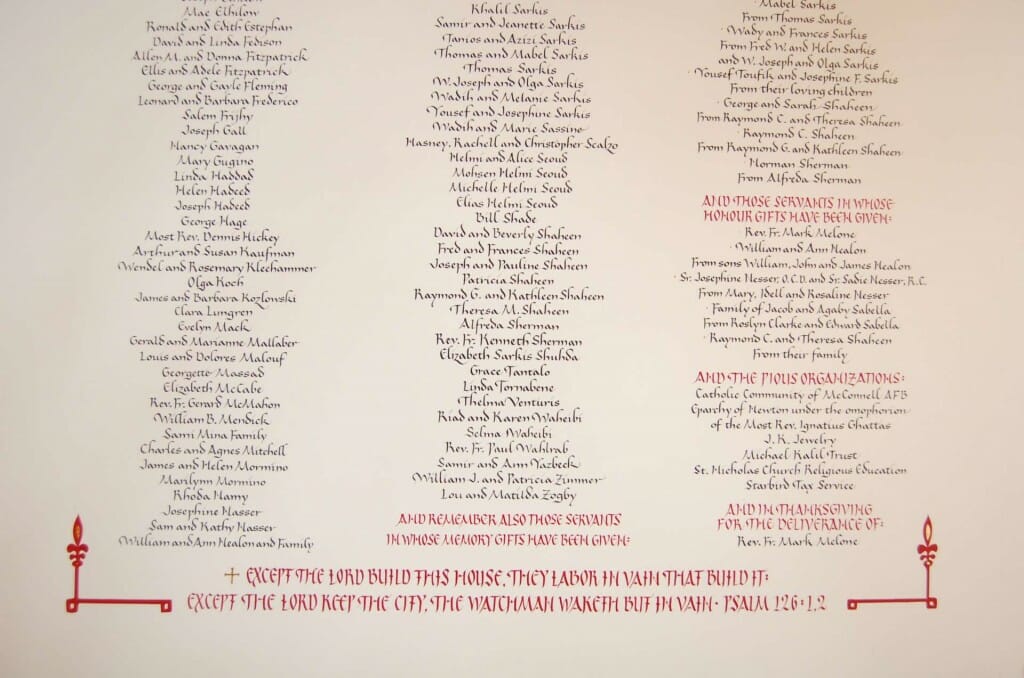 Meanwhile, I built the substantial frames in my workshop. Two are made of maple and the center frame, for the icon, is cherry. All three are inlaid with walnut, maple, and cherry banding and finished with shellac and wax. The calligraphy is mounted behind low-reflection museum glass, and before the icon hangs a sterling silver lampada of my own design. 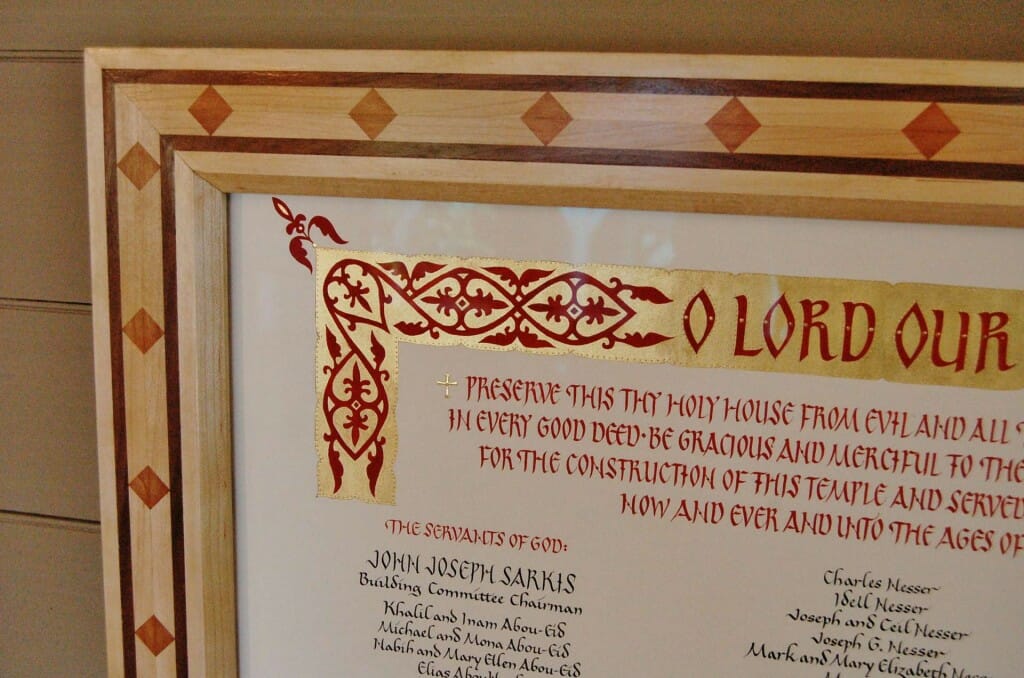 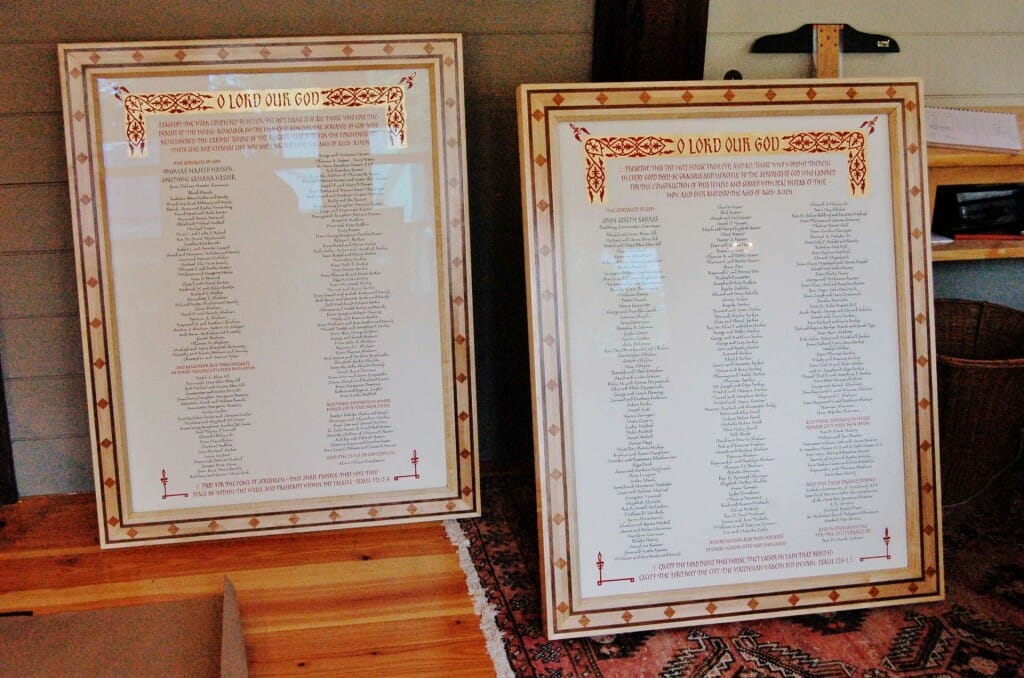 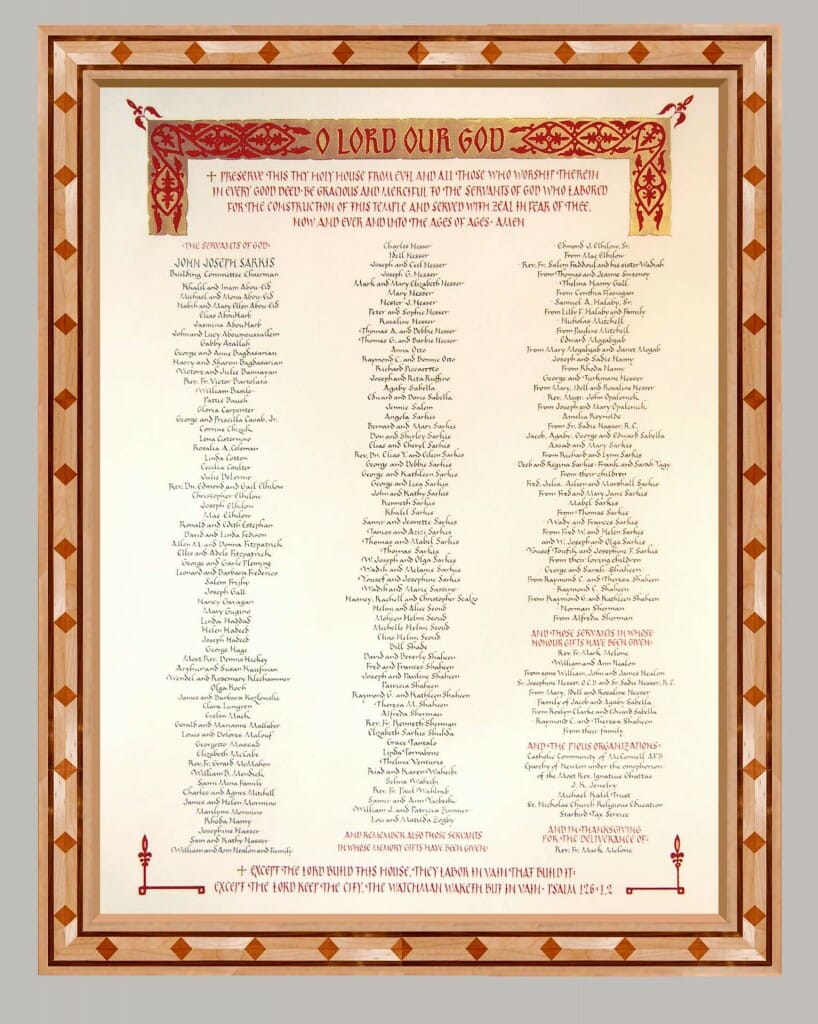 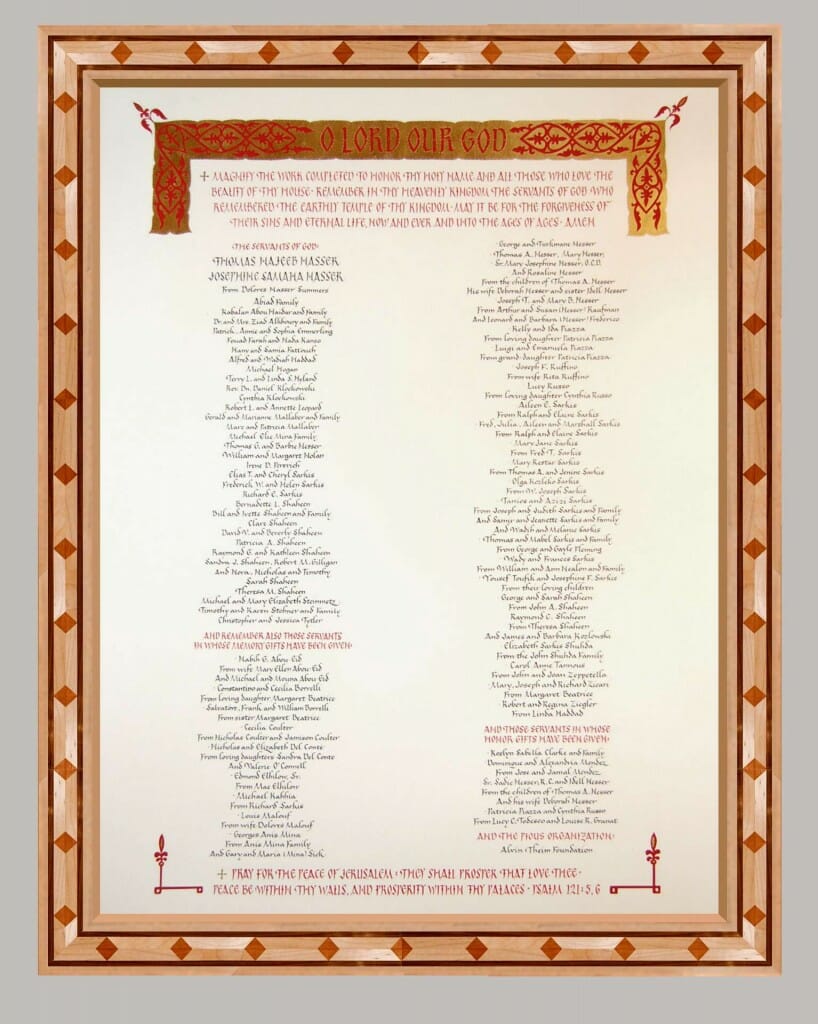 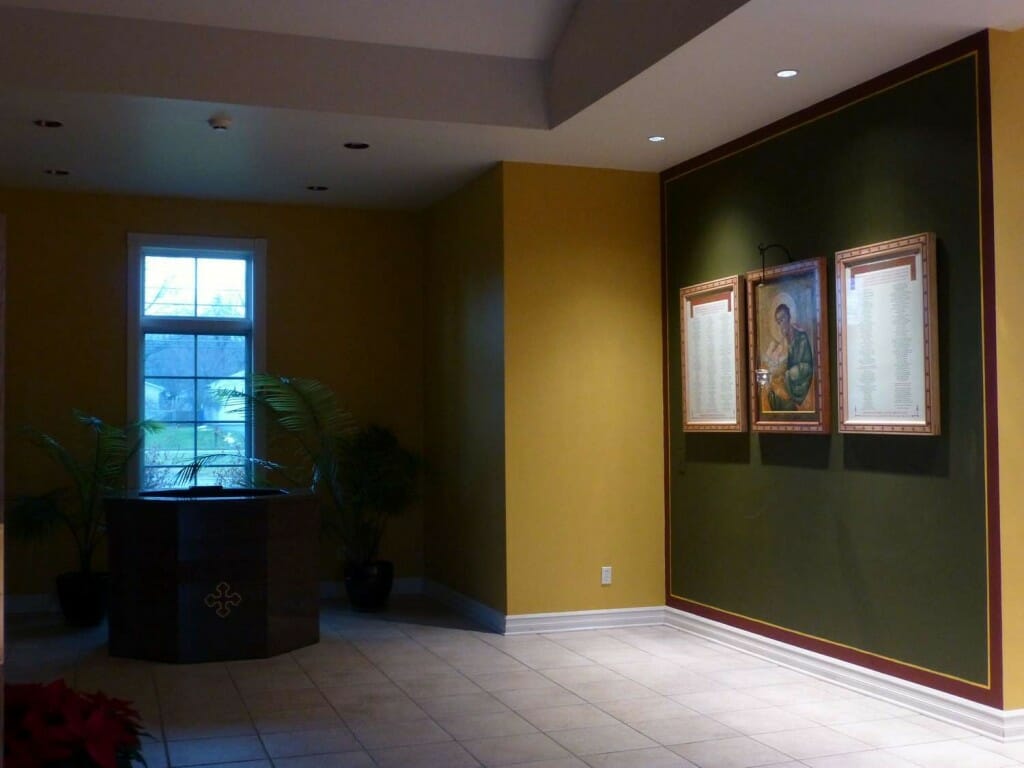