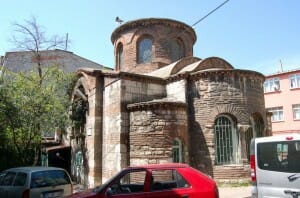 I will be periodically posting short photo-essays illustrating historical Orthodox art and architecture that may be of interest to our readers. I have decided to start with some photos of the least-known Byzantine church in Istanbul, the tiny church of St. John the Baptist, now the Hirami Ahmet Pasha Mosque. It is the smallest Byzantine church still standing in the city, and it has never been significantly studied. 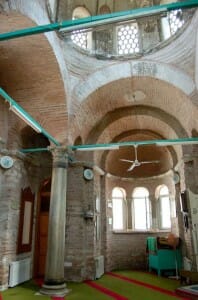 For such a small church it is exceptionally beautiful inside. The proportions of the interior are almost sphere-like, with a comforting sense of enclosure. It has all the architectural elements of a large Middle-Byzantine church, but in delightful miniature.

Pictures of the interior are almost impossible to find, which is why I’ve decided to share my own. The mosque is not open to the public, and is located in a poor neighborhood of Istanbul that does not exactly welcome foreigners. I was lucky to pass the mosque by when some folks had the door propped open, and I was able to slip in a take a few pictures before I was asked to leave. What an extraordinary contrast between the splendid Imperial architecture and the contemporary furnishings of the impoverished mosque! 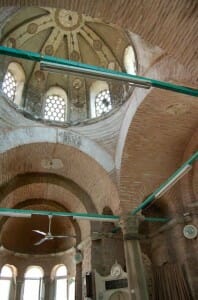 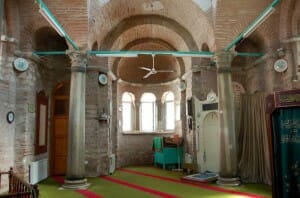 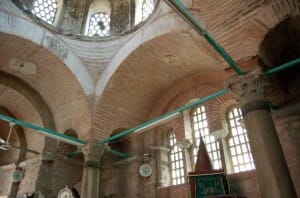 Nothing is known about this church before the conquest of Constantinople in 1453. The style of construction dates the building to the 12th century.

When the Patriarchate was moved from the Church of the Holy Apostles to that of Pammakaristos between 1454 and 1456, Patriarch Gennadios displaced some nuns who were living in the monastery of Pammacharistos to the small nunnery of Troullos, which was probably founded on this occasion.[3] At the end of 16th century, during the reign of Sultan Murat III, Hırami Amet Pasha, formerly Agha of the Jannissaries, converted the church of the Pammakaristos into a mosque.[4] He did the same with the church of Saint John, closing the nunnery and expelling the nuns. This should have occurred between 1587 or 1588 (the years of the conversion of Pammakaristos) and 1598, the year of his death.[5] The small building had gone to ruin by the beginning of the 20th century. It was carefully restored and reopened to Islamic worship in 1961.