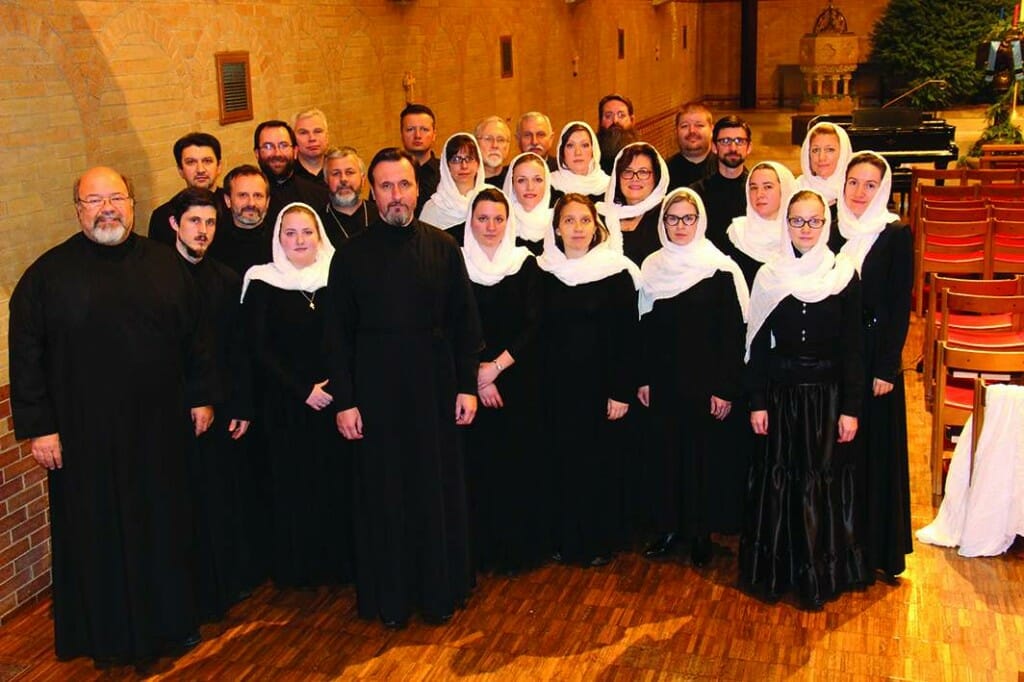 In 2012, Vladimir Gorbik, the eminent Choirmaster of the Moscow Representation Church of the Holy Trinity-St. Sergius Monastery, came to North America for the first time to teach a master class on the interpretation of Russian Orthodox sacred choral music at St. Vladimir’s Seminary. After the success of that initial event, subsequent master classes were held at St. Seraphim Church in Santa Rosa, California, at St. Tikhon’s Monastery, and at Holy Trinity Monastery in Jordanville, New York. To give these educational efforts some solid footing, the Patriarch Tikhon Russian-American Music Institute (PaTRAM) was established, with Vladimir Gorbik as its Rector, Benedict Sheehan of St. Tikhon’s Seminary as its Vice-Rector, and Alexis Lukianov as Chairman of the Board.

In the fall of 2013, the Patriarch Tikhon Choir, a group of 30 professional-level Orthodox singers, was established and gave its world premier concert tour, with appearances in New York City, Pittsburgh, and Washington, DC. (Read the New York Times review of the concert here.) In December 2014, the Patriarch Tikhon Choir reassembled in Wilkes-Barre, Pennsylvania, to record its first CD, Praise the Lord, All Ye Nations, with a release date of November 1, 2015. In the following article, conductor Vladimir Gorbik shares some of his thoughts concerning the goals and challenges of this recording project: 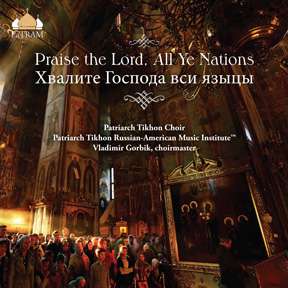 Praise the Lord, All Ye Nations

In our time, when enmity and strife are increasing throughout the world, it would not be an exaggeration to regard the appearance of this CD as a deeply symbolic occurrence. Orthodox Christians from three countries—Russia, the United States, and Canada, assembled in order to fulfill the primary mission of the Patriarch Tikhon Russian-American Musical Institute in North America (PaTRAM): to make a recording of Orthodox liturgical music in two languages—Church Slavonic and English. 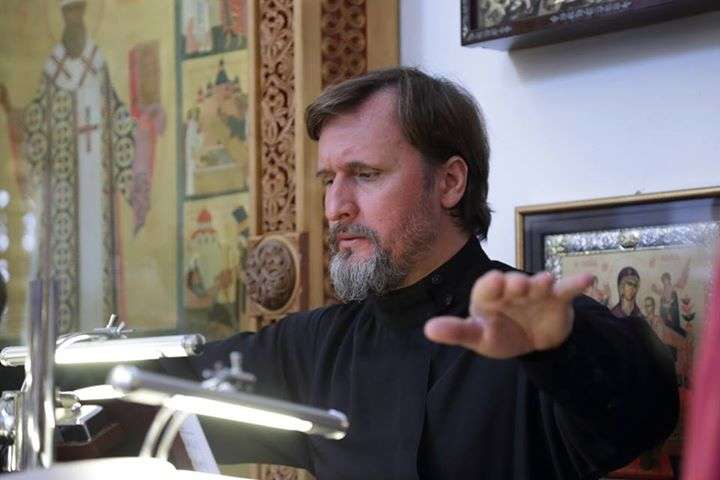 Despite the fact that the Patriarch Tikhon Choir is a professional ensemble whose sonority lies squarely within the traditions of the liturgical choral art, not all of its members have a professional-level musical education. Among the singers on this CD are people with very diverse professions, including musicians, medical professionals, programmers, music producers, engineers, and even the CEO of a major American corporation.

As part of their audition and preparation for this recording, singers emailed me audio files of them singing their individual parts. Listening from a remote location, I studied these recordings and made decisions as to who would participate in the project and who wouldn’t. After all these preliminary auditions, we assembled in the huge and magnificent St. Stephen Episcopal Pro-Cathedral in Wilkes-Barre, Pennsylvania, and set about fulfilling our complex goal. 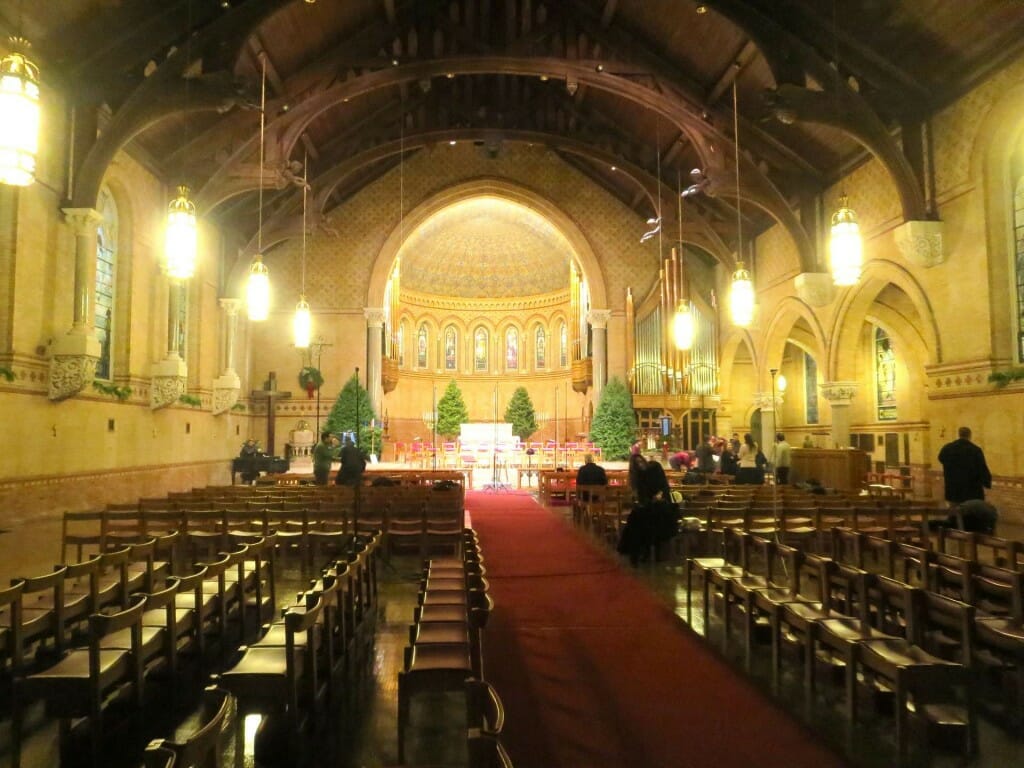 To an outside observer, the challenges that faced our recording project may appear insurmountable, but this is actually the way it all happened. First of all, until the moment we began recording, this particular group of singers had never sung together. Second, there were only four days in which to accomplish all the rehearsing and recording. Third, the choir was made up of singers representing nations having entirely different cultural roots, as well as dissimilar mental and emotional dispositions. Fourth, singers from absolutely different schools of vocal training had to arrive at a common style of singing. Fifth, and this was a particularly significant obstacle, the singing was done in two languages—Church Slavonic and English—that are quite dissimilar from the standpoint of their phonetic character. The diversity of regional dialects and pronunciation among English speakers in North America and Russian speakers in Russia is well known. This diversity had to be overcome in order to achieve uniformity of pronunciation and diction. But the greatest effort had to be made by Americans and Canadians in pronouncing the Church Slavonic language, and by the Russians in pronouncing the English language. The final challenge consisted of the fact that we all assembled not simply to give a beautiful rendition of some good music, but to sing in a prayerful manner, which was the most complex task of all.

The program of the CD includes the liturgical works of composers from both continents as well as the works of the contemporary American Orthodox composer Benedict Sheehan. The repertoire is distinctive and varied, and yet is deeply traditional and churchly. The selection of hymns was made from the characteristic genres of the All-Night Vigil and the Divine Liturgy. The specific choices were made with the view of presenting liturgical hymns of contrasting musical content as well a variety of different forms.

Of course, to write about the distinguishing vocal qualities of the choir is the task of music critics, rather than the choirmaster who was the director. But because of the unusual nature of the project, and the challenges that, with God’s help, we had to overcome, I cannot help but point out some of the particular qualities of this choir’s sound, with which God blessed us for our labors. These included the deepest bassi profundi, whose range extended down to D1, sopranos with a luminous sound, high lyric tenors, and altos whose heart-warming sound was all-embracing. The men’s group and the mixed ensemble, the soloists and canonarchs, all sound resonant, genuine, and serve as the adornment of this choir, in my view.

The main purpose of the Patriarch Tikhon Russian-American Musical Institute and its choir is to transmit and establish in North America the choral singing traditions of Russian Orthodoxy. To accomplish this mission singers were assembled from three of the main Orthodox jurisdictions: the Orthodox Church in America, the Russian Orthodox Church Outside Russia, and the Russian Orthodox Church–Moscow Patriarchate. All the singers in the Patriarch Tikhon Choir’s singing are faithful believers, and this fact makes their singing is particularly prayerful. For a singer who is a believer, church singing is not simply a lovely way to achieve self-fulfillment in the realm of choral artistry. Rather, it is a form of prayerful communication with God by means of singing. This factor was very helpful in allowing us to overcome all of the aforementioned difficulties. For, as the Holy Gospel tells us, whenever two or three are gathered together in the name of Christ, He is present there with them (Matt. 18:20). Since here were assembled Orthodox believers from three different nations, we were all praying, putting our trust in the God’s help, and it came to us.

Praise the Lord, All Ye Nations may be pre-ordered for $14.98 from Musica Russica by clicking on the above link. Orders will be shipped after November 1, 2015. Listen to sample audio clips, read a review, and contribute your own review.