The Transfiguration in Shadow. 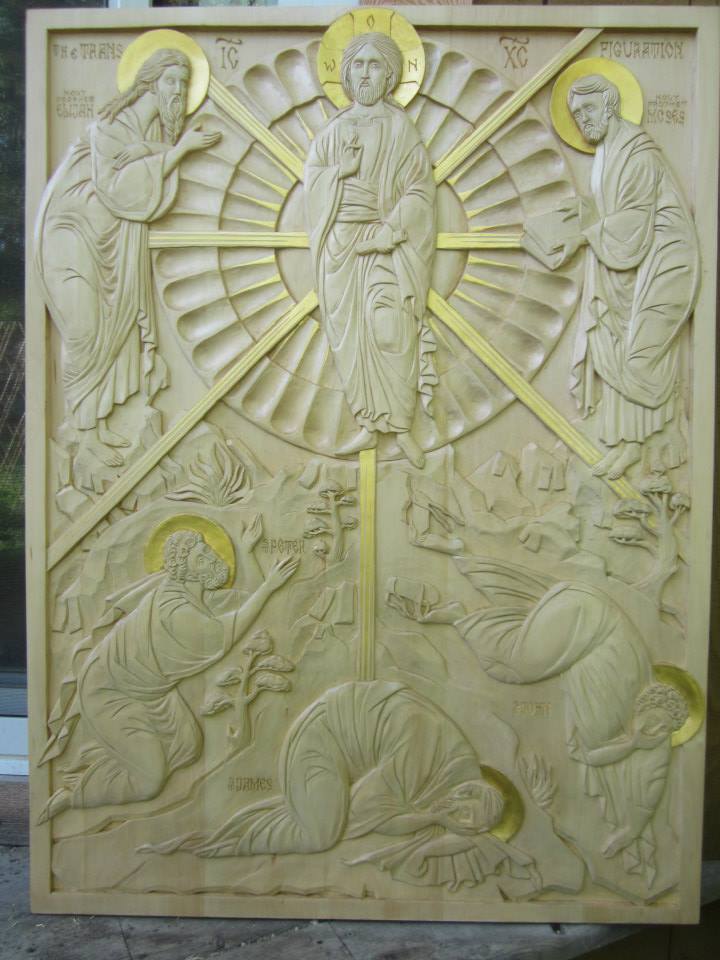 Last year I was asked by a patron to carve a large icon of the Transfiguration.  She said: “I am curious to see how you will do that.”  I understood immediately what she meant, and her comment for me went to the core of what icon carving attempts to grapple with.  So much of Orthodox theology, especially since St-Gregory of Palamas has been a theology of light, the question of uncreated light.  The transfiguration as both an event in scripture and as an icon was deeply involved for St-Gregory and the debate at the time. With the victory of the Hesychasts we see a new emphasis on the transfiguration, especially in the development of complex mandorlas.

And in that vein, many of the icon’s conventions, like gold, halos, highlights on figures came to be more and more explicitly understood in the frame of uncreated light.  Don’t we say in common usage that icons are windows to heaven, theology in color?

Now carving is not an art of light.  Rather, it is an art of shadow.  Carving uses contrast of form to create shadows by which the image appears. So maybe we could think that some of the criticism faced by carved icons in the Orthodox tradition has a root in this.  One of my students was told by her priest that she should not take my icon carving workshop because icon carving was not Orthodox, instead, he continued, she should learn stained glass…  I am holding back my wit with both hands at this moment, I assure you. 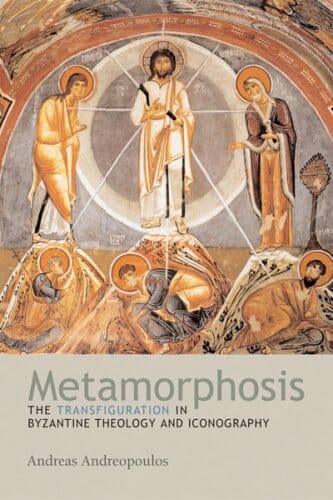 But what is fascinating in this question is that in the Bible, there are really two aspects of the Glory of God, a light side and a dark side. Fr. Andreas Andreopoulos in his book Metamorphosis: The Transfiguration in Byzantine Theology and Iconography, is the first to my knowledge to deal with the question of two aspects of God’s glory directly.  Among other things, he talks about how some scholars separate the notion of glory into two aspects which he frames as light and space.  These two aspects of course come from looking at how glory (kabod) appears in the Old Testament especially, how it is sometimes presented as light, while it is other times (and maybe even most of the time) presented as a dark cloud, a heaviness, a shadow that covers. The most obvious example is when Solomon dedicated the Temple, it is said that:

This is also true even in the New Testament, notice for example how when the Archangel announces to the Theotokos, he says “The power of God will overshadow you” (Luke 1:35), literally to cast a shadow on you, or figuratively to envelop, cover you.   Sometimes this notion of glory can be both “light/immaterial” and “dark/dense” at the same time, the most interesting example is related to the story of when Moses came down from mount Sinai and his face was changed. The most common translation today is that “Moses knew not that the skin of his face shone while he talked with him.”  But St-Jerome in his Vulgate, instead of translating the Hebrew word QRN, (קָרַ֛ן) into shining, he translates it to the latin word for “horned”. This has given rise to some surprising images in Western iconography where Moses is represented with horns on his head. 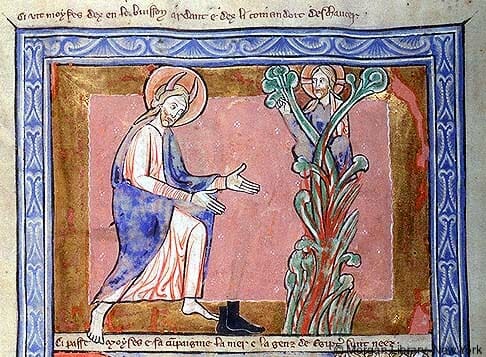 Many have criticized this translation, but the Hebrew QRN does in fact denote horns, for example on the four corners of the altar, and it seems to be a cognate and share the same root even for the English word “horn” (compare Latin “cornu”, French “corne”, Greek “karnon”).  But QRN can also denote rays coming out of something and this is why it has often been translated as radiance.  So which one is it?  Is the glory of God light/ray/immaterial or dark/dense/spatial?  Of course the answer is both and neither, but this is a paradox, an aporia meant to point to the ineffable yet also immediate quality of all that is Divine.

In the narrative of the transfiguration the two aspects of the glory are put one next to each other. In all three accounts there are two steps in the manifestation of glory.  First Christ’s face shines with light and his clothing becomes white.  Second, there appears a cloud that overshadows and covers those present.  This double manifestation appears especially in the Gospel of Matthew where the paradox is brought closer together. After it is said “He was transfigured before them; and His face shone like the sun, and His garments became as white as light”, it then goes on to say that “While he (Peter) was still speaking, a bright cloud overshadowed them”. The use of the word “bright” in immediate contrast to the word “overshadow” joins the two aspects of glory into one, full and total experience of the incarnate Divinity.

But how do we represent this in images?, In his book on the transfiguration, Fr. Andreas does a good job at laying out the basic question of glory and how tradition developed different shapes of mandorlas for different reasons. I suggest his book to anyone interested, but in framing the two aspects of glory as simply light vs. space, I think he misses much of the depth in this question.  The best way I think to frame the two aspects of the glory of God is in showing and hiding – light and dark – two sides of the paradox contained in “revealing”. Although in our theological discourse we speak mostly of uncreated light, in our liturgical practice we still have a tendency to cover, to envelop, to veil holy things. This I think has to do with the inevitable aporia of anything that manifests God. For many years now I have believed this to be related to icon carving, not only to icon carving but to art in general and many of my earlier articles on OAJ bear witness to this in my constant discussion of the garments of skin as a supplementary “covering”.

It seems clear to me that in early Christian art there is a strong sense of this duality of glory and it appears in some visible distinctions between the two dimensional image and the relief image. In the pre-iconoclasm art that we have, we see that in many of the carved images, instead of a halo, carved images of Christ or the saints are represented with a scallop shell either over or behind their head.

Just as the halo, the shell is an ancient pagan motif converted by Christians, but in order to fully understand the use of the shell, we have to grasp its architectural function, which is related to the apse or niche and we will see the shell either carved or sometimes painted with a scallop in the half-dome shape of a niche.

The use of the shell suggests a very powerful symbolism that we could not exhaust in a blog post, but suffice it to say that the shell is a hard covering which protects and conceals life (or the pearl) within. The Scallop particularly is also composed of “rays” which move from the inner center to the outer periphery and so is a particularly appropriate image for manifestation.  In our case, what is most interesting is how the shell, unlike the halo which is a circle of light, appears much more as a covering which exists in space and so becomes related to carving and architecture (even when painted).

The use of the shell would find a longer life in the West, where the basic use of indented rays appears in many Carolingian ivory carvings and on the Gero cross. Here what is interesting is how the scallop motif has been abstracted and is joined with the circle of the painted halo. In this it becomes a very potent image.

The scallop motif would become rarer as the Middle ages progressed, but it would reappear in later Catholic art as an architectural motif once again.

There is an interesting and effective Byzantine use of these forms, the famous Christ Savior church in Chora, where the domes have indented rays that suggest this ancient symbolism. 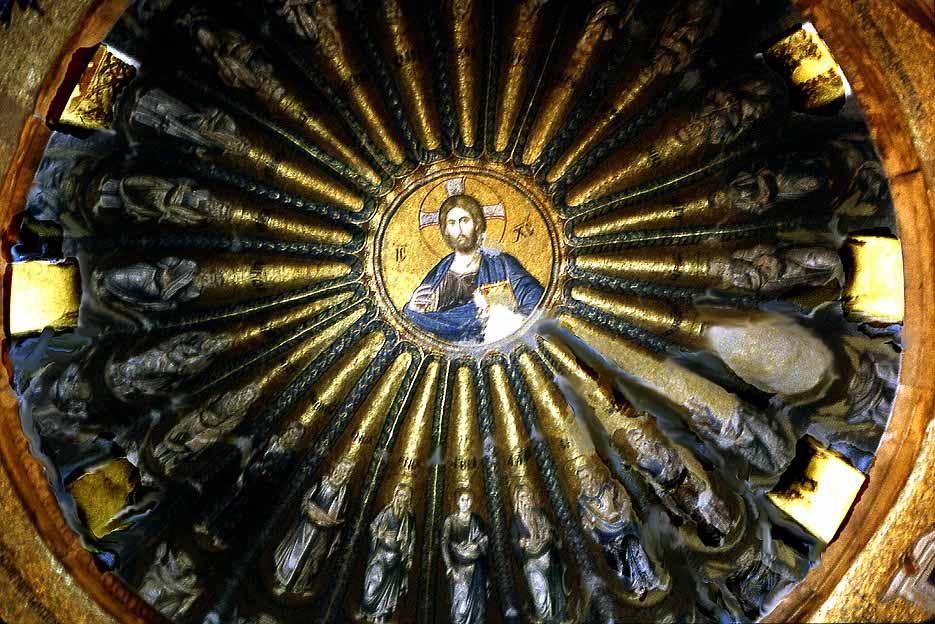 So in pondering a carved Transfiguration, it seemed only natural for me to integrate this ancient symbolism in order to emphasize carving itself and its dense/shadowy reality.  But the reference to the scallop in the glory I developed is stylized and abstracted, very much as in the later Western carved halos we looked at.  In the structures I also simultaneously refer to other aspects of the mandorla, such as different steps of manifestation leading to a dark center, represented in the carving as a rounded circle without the scallop rays and suggesting rather the pearl itself. I also added gilded rays to create an 8 spoke wheel (with Christ’s head as the 8th spoke, referring to the 8th day).

I would like to suggest a last thought.  We know that it is for a very good reason that Orthodox theology is mostly concerned with the question of light. Hopefully though, icon carving, relics, veils, rizas and other manifestations of the flip-side of revelation will help all of us participate more fully in the aporia of the infinite in the finite which is the mystery of Christianity itself. 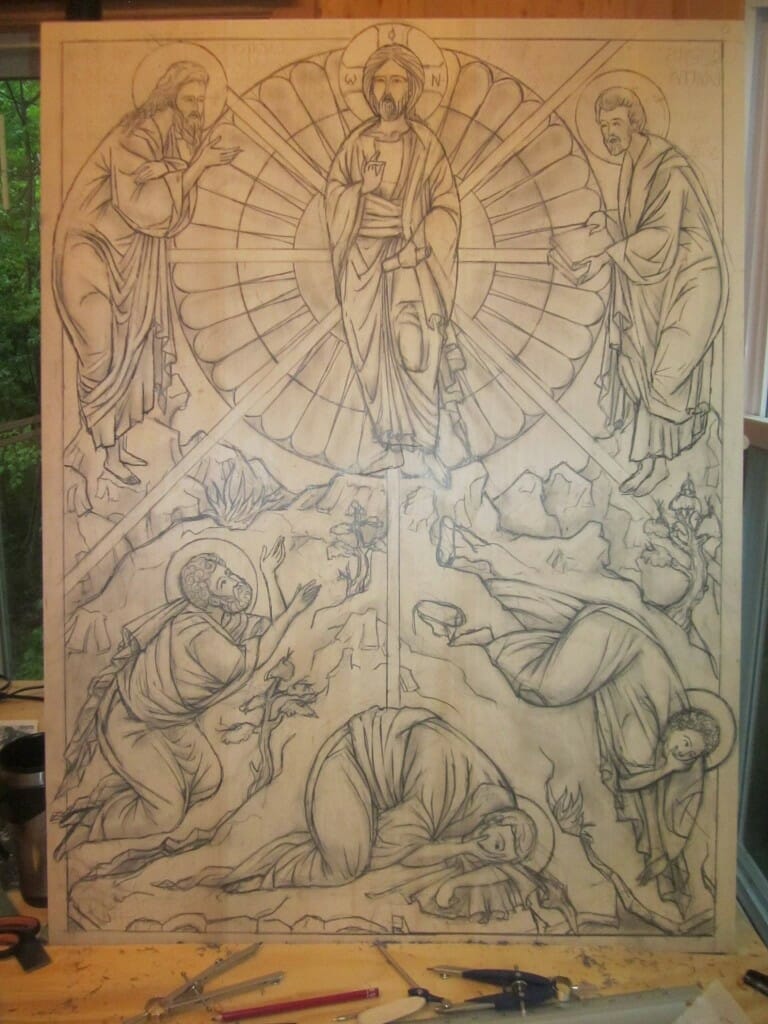 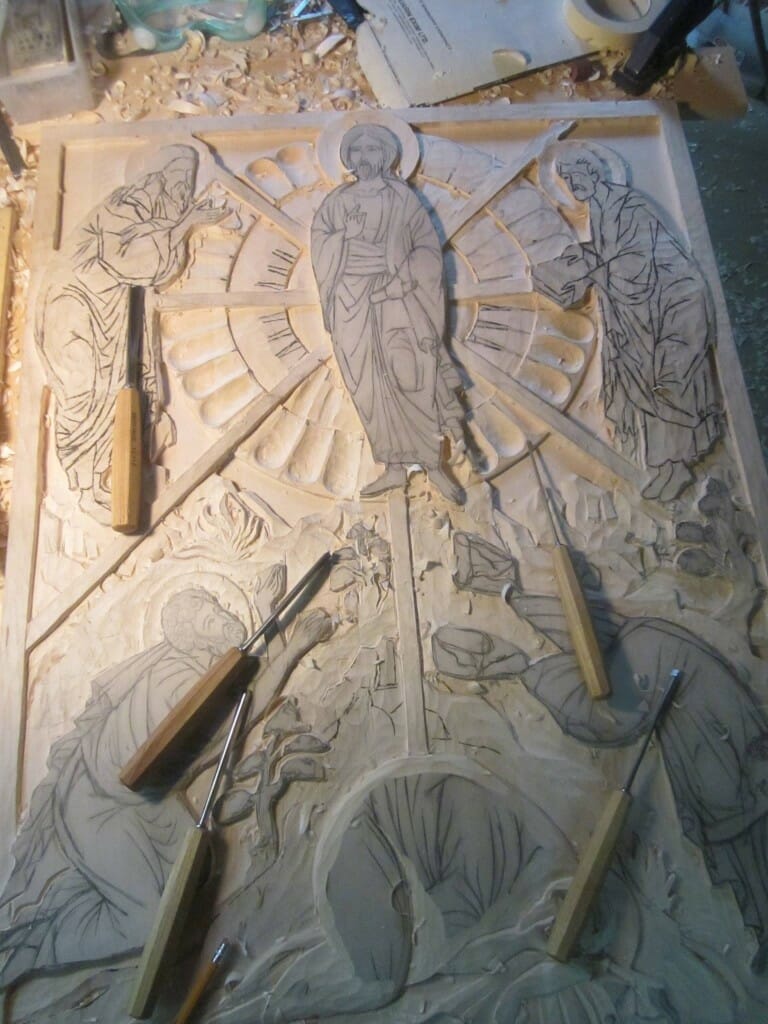 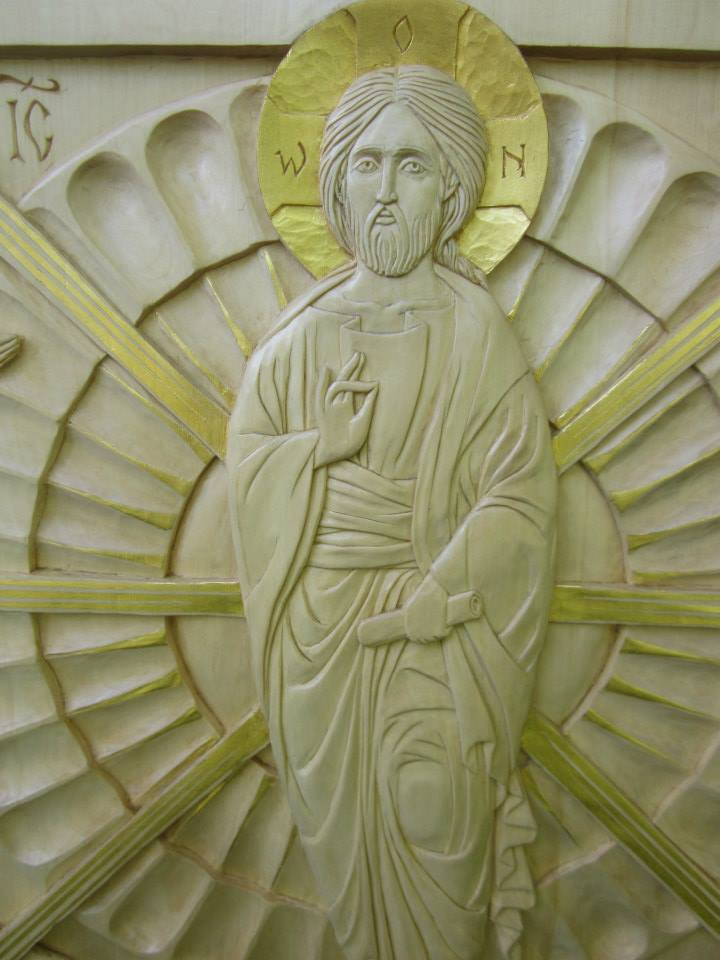 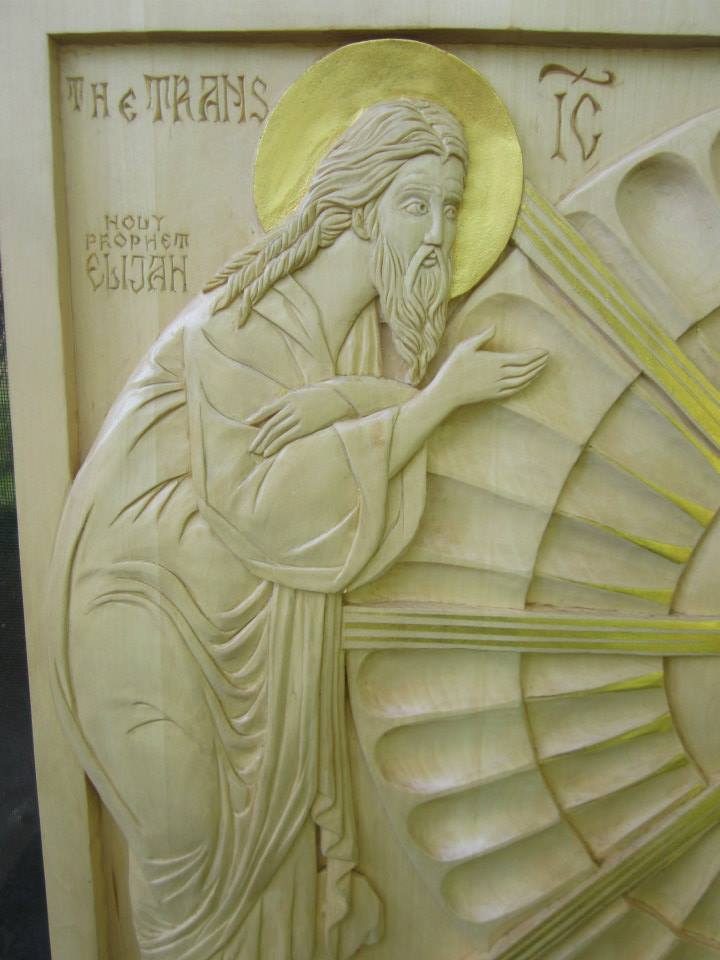 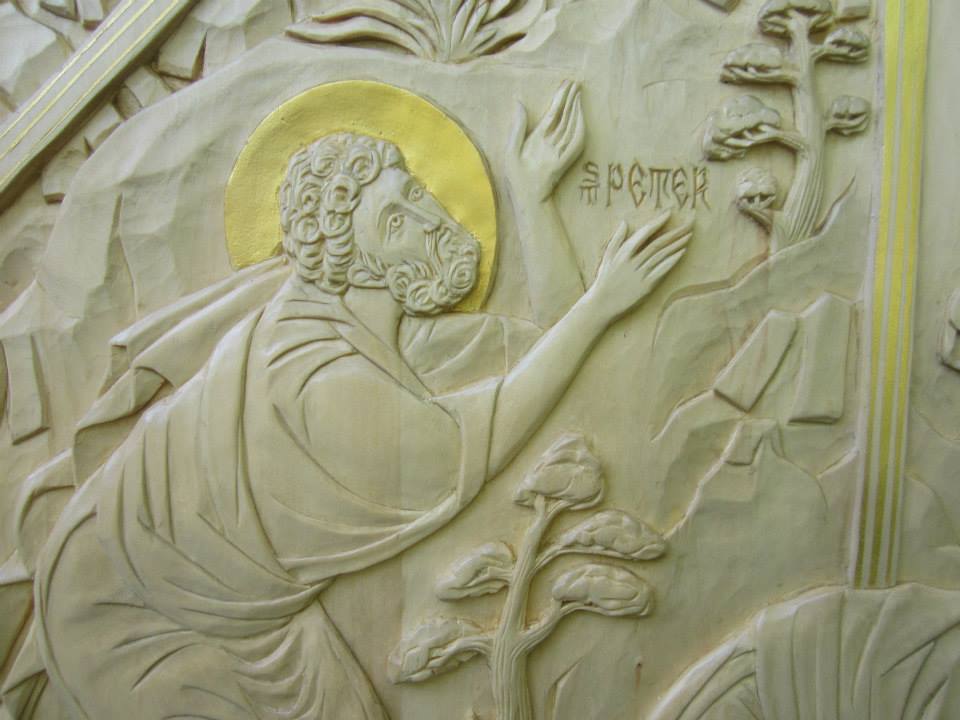 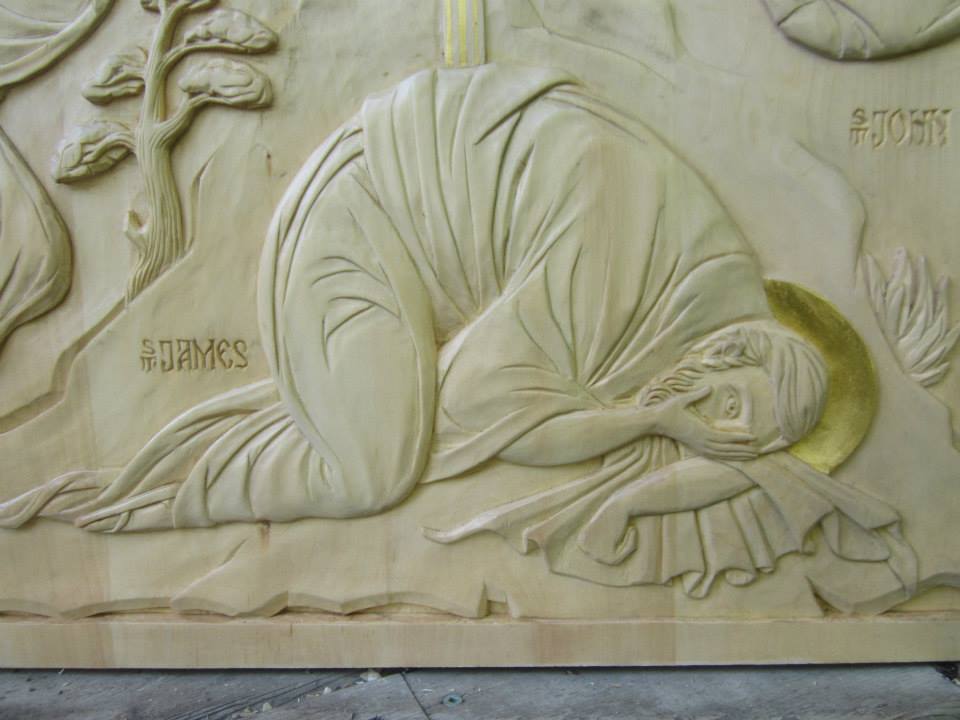 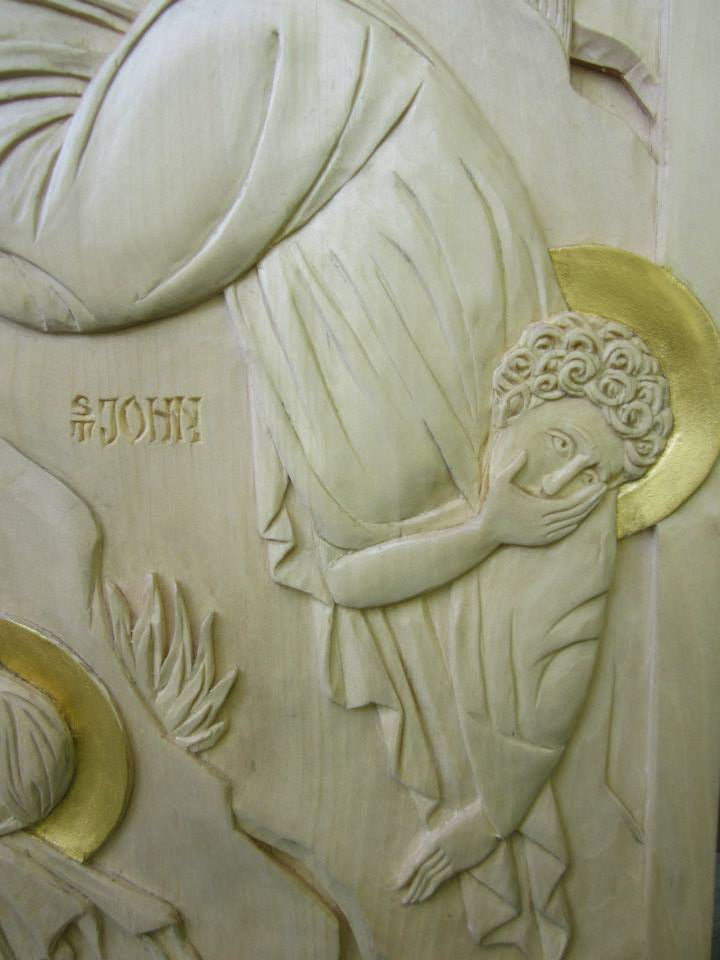 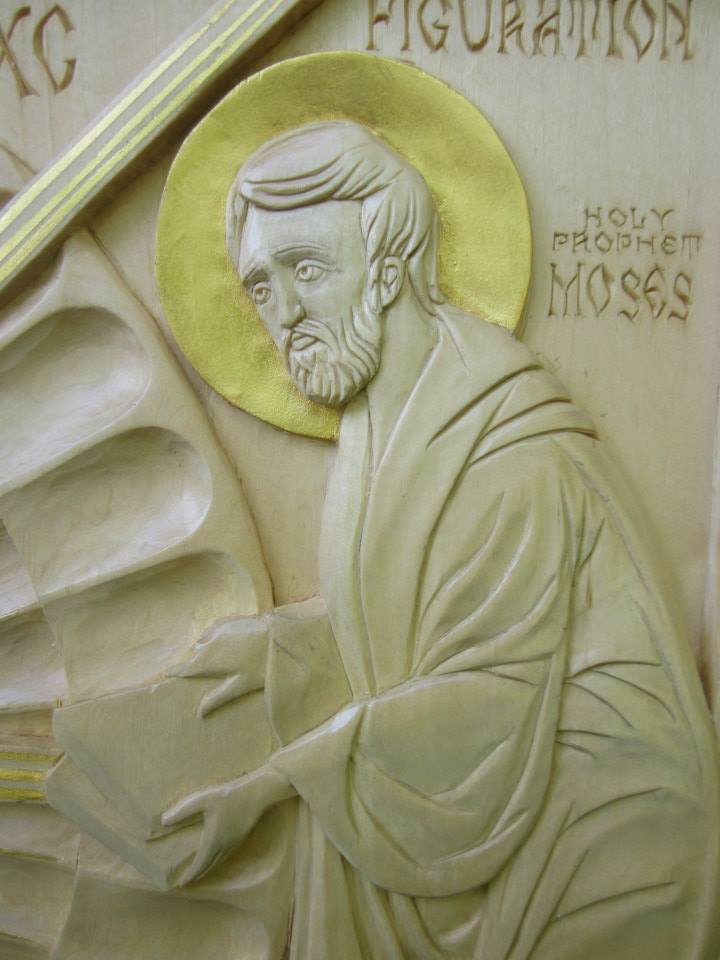 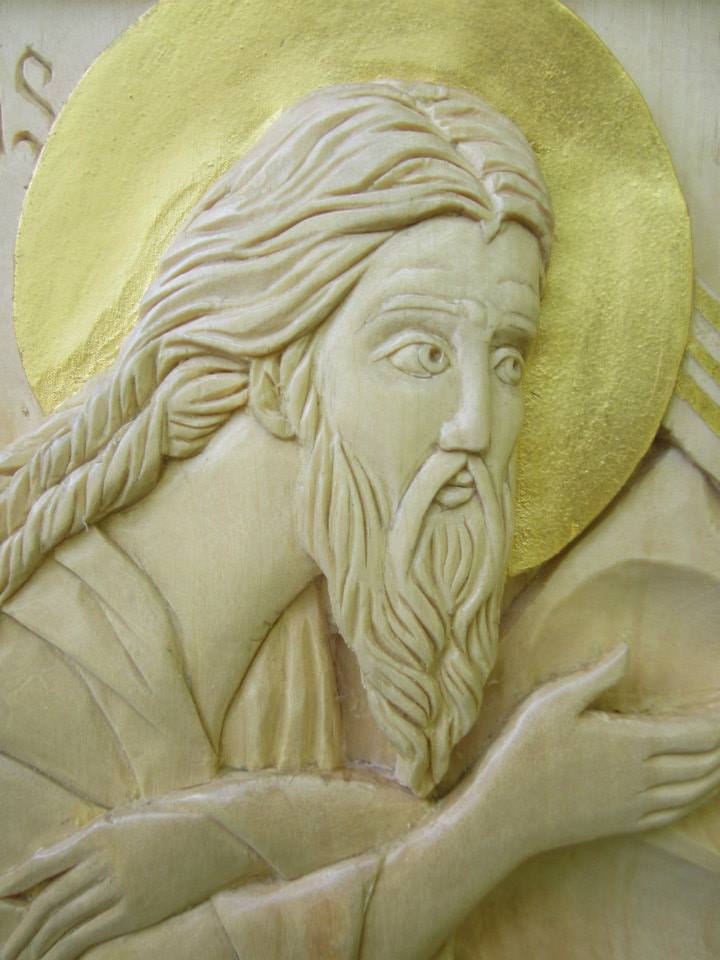