The Patriarch Tikhon Choir – Their Sound Hath Gone Forth 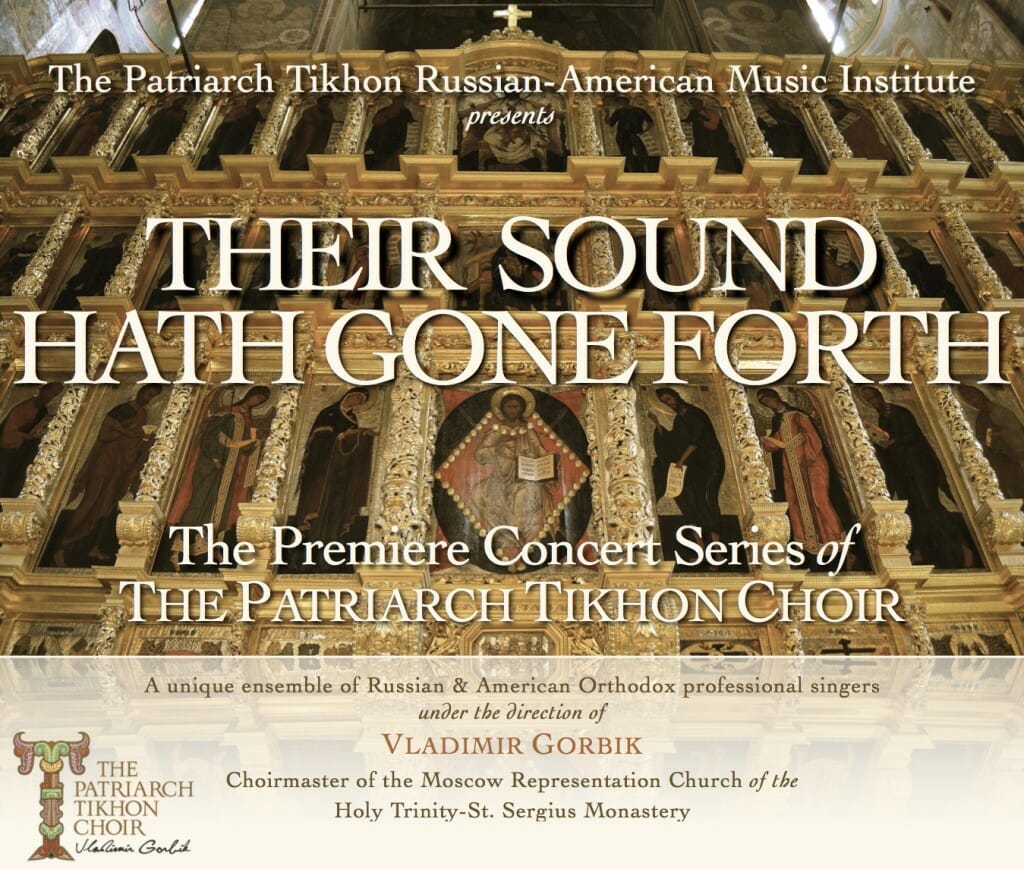 The Patriarch Tikhon Choir, a unique choral ensemble made up of professional singers from Russia and North America, under the direction of renowned Moscow conductor Vladimir Gorbik, will perform their premiere concert series of Orthodox sacred choral works entitled “Their Sound Hath Gone Forth,” Monday, September 16, 2013, at St. Malachy’s – The Actor’s Chapel, in New York City, at 7:30pm; Tuesday, September 17, 2013, at the First Baptist Church of Pittsburgh, at 7:00pm; and Wednesday, September 18, 2013, at St. Peter’s on Capitol Hill, Washington, D.C., at 8:00pm. Tickets can be purchased in advance at www.patriarchtikhonchoir.com and at the door.

The program includes works from the Orthodox All-Night Vigil and Divine Liturgy ranging from austere, centuries-old Znamenny Chants to sumptuous polyphonic works by such Russian masters as Dmitry Bortniansky, Alexander Kastalsky, Pavel Chesnokov, Sergei Rachmaninoff, and Sergius Trubachev. Also featured on the program are compositions and arrangements by contemporary American Orthodox composers Nicholas Reeves, Kurt Sander, Benedict Sheehan, and Nazo Zakkak; several will be concert premieres. In keeping with the choir’s multi-cultural approach, the program will be sung in both Church Slavonic and in English.

The recently formed Patriarch Tikhon Choir is a 35-voice mixed choir that brings together, for the first time, professional vocalists and choral musicians from the United States, Canada, and Russia. The singers, who, in addition to performing on the concert stage, routinely sing Orthodox liturgical services, impart an essential spiritual element to their interpretation of Orthodox sacred music.

The conductor, Vladimir Gorbik, is one the most prominent church musicians in Russia today. Beginning his musical studies in Yekaterinburg, he continued them at the Moscow State Conservatory, completing a specialization in choral conducting in 1998 and in orchestral conducting in 2000. Since 1996 he has served as the choir director at the Moscow Respresentation Church (Metochion) of the Holy Trinity-St. Sergius Monastery, and since 1998 has been the Artistic Director and Conductor of the professional men’s chorus formed at the Metochion. With this choir he has made more than a dozen outstanding recordings, of both liturgical services and concert programs. The choir has on numerous occasions sung at Patriarchal services in the Dormition Cathedral in the Kremlin, and they accompanied Patriarch Alexy II on his trip to the Holy Land in 2000. For his outstanding achievements and service, he has received an award of recognition (gramota) from the Patriarch, and the medal of the Order of St. Sergius of Radonezh, 2nd Degree. In September 2012, he was appointed to the conducting faculty of the Moscow State Conservatory.

Critics have hailed the “consummate choral artistry” of Vladimir Gorbik heard on his CDs, which causes them to stand out amid those by other Russian choirs of recent years. Not only is the singing first-class–suave, flexible, nuanced, with extraordinary balance and ensemble–but the repertoire is also selected from the finest body of Russian choral repertoire–the “new choral school,” which grew up around the Moscow Synodal School in the early decades of the 20th century. Western listeners whose impressions of Russian choirs have been shaped by the Don Cossacks, the Red Army Chorus, and the Monks of Holy Trinity-St. Sergius Lavra, discover in Gorbik’s interpretations an immense depth of expression and subtlety beyond anything they had hitherto experienced. Since the spring of 2012, Vladimir Gorbik has taught three highly successful master classes in the New York, Pennsylvania, and California, on the topic of “Interpreting Orthodox Sacred Choral Music.”

The Choir is named for Saint Tikhon (Belavin), a saint who is uniquely honored for his accomplishments and vision in both North America and Russia. While serving as Bishop of the Russian Orthodox Diocese of the Aleutians and North America, from 1898 to 1907, he did many things to facilitiate the spread of Orthodoxy in America, including the founding of St. Tikhon’s Monastery in South Canaan, Pennsylvania, and ministering to the various ethnic groups of Orthodox in America, both in their native languages and in English. Upon his return to Russia, his reputation as an extraordinary archpastor grew, whereupon he was elected Patriarch of All Russia in 1917, the first to hold that high office since the year 1700. Shepherding the Russian Orthodox Church during the extreme difficulties brought on by atheist Communist repression and persecution of religion, Patriarch Tikhon endured immense physical and spiritual trials, including several arrests and imprisonments, which resulted in a martyr’s death in 1925. In 1989 he was glorified as a saint by the Russian Orthodox Church.

The educational vision and missionary zeal of Patriarch Tikhon while he was Bishop in North America is reflected in the long-term mission of the Patriarch Tikhon Choir’s organizers, the Patriarch Tikhon Russian-American Music Institute (PaTRAM). Besides concert activities, a series of educational initiatives are being planned—choral workshops, master classes for conductors, and musical resources—aimed at having a positive impact upon the cultivation and practice of Orthodox liturgical choral singing in North America. Please subscribe to our email list at www.patriarchtikhonchoir.com to stay abreast of further developments.