December 5, 2013“The Icon is Making its Way in America”, an interview with Ksenia Pokrovsky

The Falling Asleep of Ksenia Pokrovsky

News that Ksenia Mikhailovna Pokrovskaya had fallen asleep in the Lord on Sunday, July 7, 2013 was a profound shock. Though she had chronic hypertension, she had not been ill. She was tired, yes, for many years, but still actively sharing her wisdom and knowledge with clarity and generosity.  For both her family and friends and for those who only knew her by reputation, a light has gone out of the world. The universal response of those closest to her and of her many students is that of having suddenly become orphans. 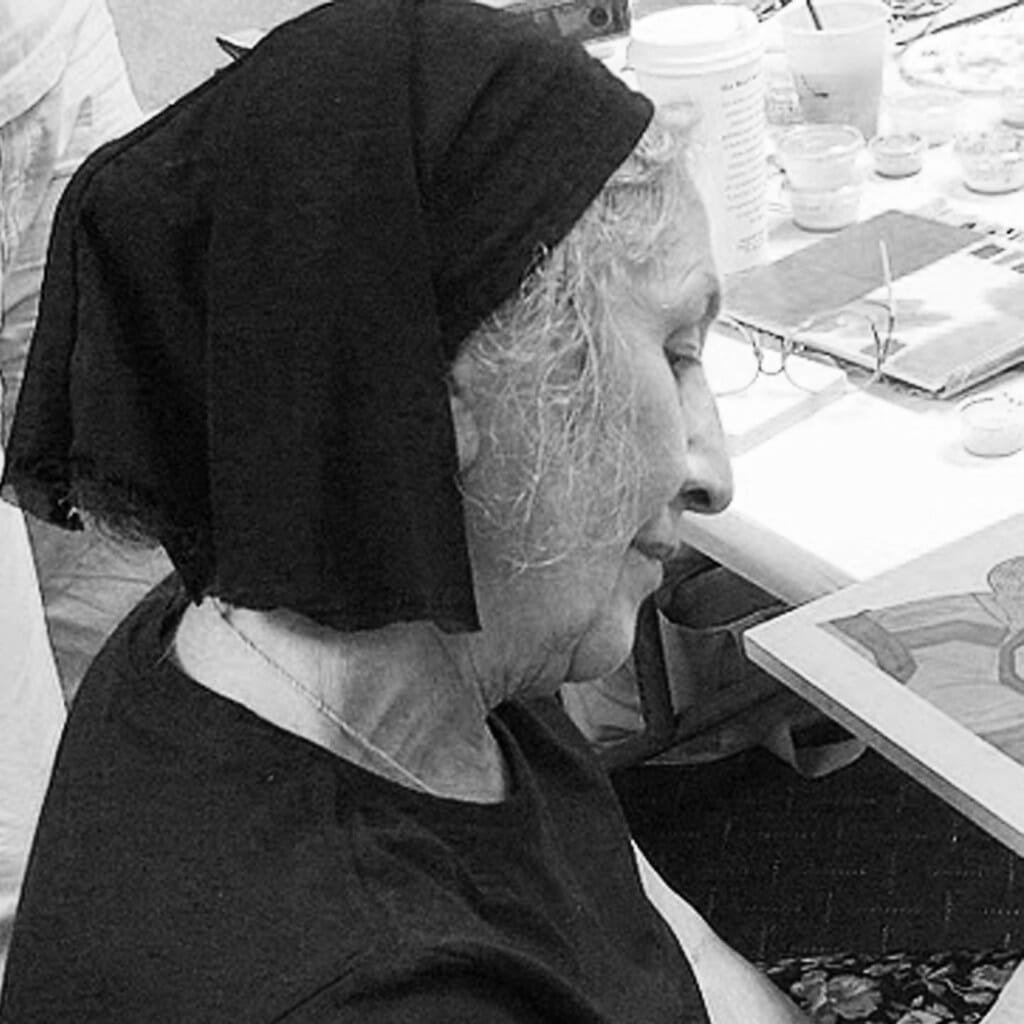 Ksenia Pokrovsky: May her memory be eternal.

Ksenia’s funeral on Wednesday evening, July 10 at St. Nicholas Orthodox Church in Salem, MA was followed by the all-night chanting of the psalter. When morning came she was carried from the church to St. Tikhon of Zadonsk Monastery in northeastern Pennsylvania to be buried beside her son Dmitri († 2001). Keeping the Russian custom, the mourners themselves closed the grave with shovels and hands full of earth. The labor helped to lighten their burden of grief.

The main elements of Ksenia’s biography (see Wikipedia) are well known. She was born in Kirghizstan in 1942 during World War II when many Muscovites were evacuated because the Nazis were less than 100 miles from the city. Ksenia’s heritage flowed from many streams, including Tartar and Jewish ancestors, as well as Russian, Polish and Bulgarian. She described her mother as “a romantic communist.” It was her paternal great aunt Katya who taught her what a Christian is and cultivated in Ksenia a love of art.

Ksenia met her future  husband, Lev Alexeyevich Pokrovsky, while they were students at Moscow University. They were married in 1960 and lived together for 53 years. Lev became a teaching professor and researcher of theoretical physics while Ksenia pursued biophysics. As she completed her studies and worked in the field, Ksenia realized she was more interested in the laboratory of metaphysics than in gathering data in the halls of science. The Pokrovskys were a part of Fr. Alexander Men’s parish in the village of Novaya Derevnya located a short distance from Moscow. When Ksenia told her dilemma to Fr. Alexander, he was forthright, “Alright then, you will be an iconographer!”

Her life’s work as an iconographer reflected a scientific mind that constantly investigated every field of knowledge from chemistry and geology to psychology and history, to philosophy and theology.

After Fr. Alexander was murdered in September of 1990, the family with the exception of one son immigrated to the United States in June of 1991. Together Lev and Ksenia reared four sons: Yevgeny, Dmitry, Nikolay and Ilya; and a daughter Anna.

Beyond the facts of her life there are stories, a bottomless repository of stories that would fill many books. Her family, friends and students will be telling these stories for the rest of their lives. Besides being one of the finest iconographers of contemporary times, Ksenia Pokrovsky was one of the great personalities of the 20th and 21st centuries. Everyone who met her recognized this instantly. For all her great knowledge, she remained simple and approachable. She was very clear about the vocation of the iconographer, and she was keen to separate it from the sometimes ego-satisfying aura of the artist.  “An iconographer can never have ambition,” she would say.

Her long-time student Marek Czarnecki tells this story which illustrates Ksenia’s goal as an icon painter.

“I once told Ksenia that I thought she was the best iconographer alive. ‘No’, she said (modestly and honestly) ‘there are many living iconographers much better than me’, citing Zinon as an example.  She did know, however, where she had authority. ‘I understand some things well, and I want to be able to leave what I do know somewhere, so it is not lost.’  She said she wanted her students to jump over her. ‘That’s impossible, I said, ‘you are too high to jump over.’ Playfully but emphatically she answered, ‘then I don’t want to teach you.’”

As an iconographer her influence is immeasurable: a hero and pioneer to many generations of icon painters in Russia; a consummate teacher of the sacred art and a peerless example of the profession to hundreds in the West. Truly the light of her accomplishments continue to shine forth in the world and will only grow more bright as future generations come to know her. 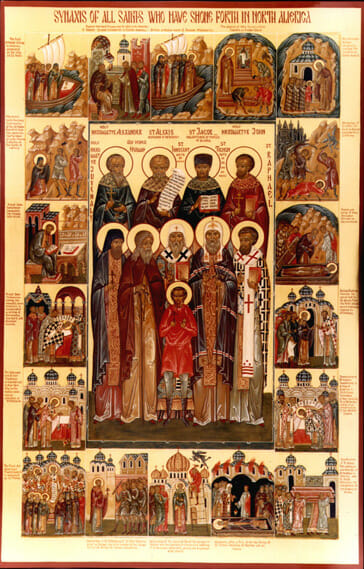 Synaxis Of All Saints Who Have Shone Forth In North America

Ksenia Pokrovsky was the author of many new icons. Her “Synaxis Of All Saints Who Have Shone Forth In North America” has become famous as the prototype for iconographers to follow. The icon is owned by the Archdiocese of the Orthodox Church in America (OCA) and is housed in OCA headquarters in Syosset, New York. It was commissioned by Metropolitan Theodosius after Ksenia arrived in America. It is fitting that Ksenia fell asleep on the Feast of the Saints of North America, Sunday, July 7, 2013. The icon appeared on the OCA website that Sunday. For us it was an unforeseen synaxis of events, though surely appointed by God since before the foundation of the world.