Some New Musical Repertoire in Honor of the Mother of God 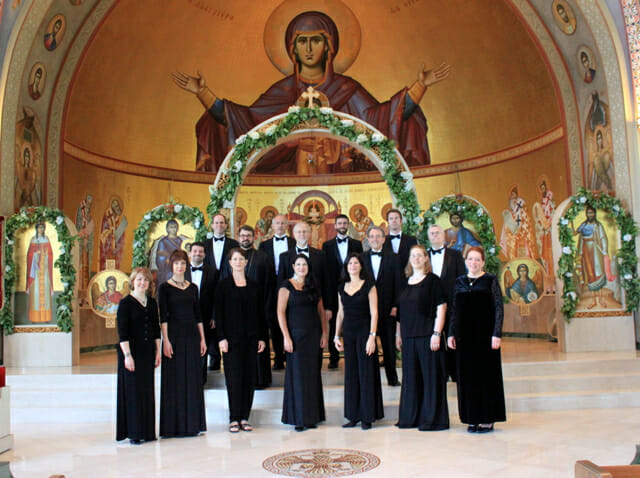 Archangel Voices beneath the protection of the Most Holy Thetotokos at St. Barbara Greek Orthodox Church, Orange, Connecticut

One of the rewards of working with a group of professional-level singers such as Archangel Voices (www.archangelvoices.com) is the opportunity to explore and record, often for the very first time, some newly composed or newly arranged Orthodox sacred choral repertoire. Even more rewarding is to hear on occasion that our efforts have met with approbation among our colleagues, and that pieces we introduced on past CDs have been accepted into the repertoire of a given church choir. Listen to Kurt Sander – All of Creation

Kurt Sander (b. 1969) is an Orthodox composer who teaches music theory at Northern Kentucky University and directs the choir at St. George Russian Orthodox Church in Cincinnati, Ohio. His “All of Creation Rejoices in Thee” is a free composition that by its use of subtle and subdued 4-part chordal textures, contrasting with rich and brilliant 8-part writing, expresses both the mystery and the grandeur of this text. A magical moment occurs after a fortissimo culmination on the words “more spacious than the heavens” is followed by the reprise of the words “All of creation rejoices,” sung pianissimo and dolce. Singers in the Archangel Voices choir, many of whom are professional church musicians, remarked on the creative ways in which Sander uses slightly innovative chord progressions and passing dissonances, placing his musical vocabulary decidedly in the 21st century, while remaining squarely within the traditional Orthodox musical aesthetic. Both this work and his “Virgin Theotokos, Rejoice,” also recorded on Panagia, were among the choir’s favorites. Both of these pieces are published by Musica Russica.

Listen to Richard Toensing  – Awed By the Beauty

Richard Toensing (b. 1940), an Orthodox composer residing in Colorado, is professor emeritus of composition at the University of Colorado, Boulder, and choir director emeritus at St. Luke Antiochian Orthodox Church, in Erie, Colorado. In his arrangement of “Awed by the Beauty,” the troparion sung at the end of the Akathistos Hymn to the Most Holy Mother of God, scored for three treble voices SSA, the familiar Byzantine melody lies in the top voice, while the two bottom voices provide a lovely homorhythmic counterpoint, not entirely avoiding the occasional passing dissonance, but bathing the text in a glowing musical halo of brightness and light. The score may be obtained by contacting the composer.

Listen to Nazo Zakkak – Today Is the Beginning

Whereas Kurt Sander and Richard Toensing are established composers who have written dozens of musical works both for the Orthodox Church and in other genres and contexts, the youngest composer represented on the CD, Nazo Zakkak (b. 1987), is a relative newcomer to the realm of Orthodox choral composition; all his four works recorded on Panagia are world premieres. From an extensive background in jazz and piano improvisation, Zakkak has turned to writing choral music for the Church, using sonorities that are crystalline and pure, yet do not shy away from the occasional subtle dissonance. In his freely-composed Troparion of Annunciation “Today Is the Beginning of Our Salvation” he successfully employs formulaic repetitive patterns, such as might be found in jazz improvisation (or common Russian harmonized chant, for that matter), to create a piece that marvelously expresses the text and remains within a liturgically appropriate aesthetic. “Today Is the Beginning” is available in published form from Musica Russica.

Listen to Andrei Ilyashenko – The Mystery of God

Besides the works of new composers in North America, the Panagia CD features new adaptations into English of eight works by Russian composers: four by Pavel Chesnokov, and one each by Alexander Kastalsky, Alexander Nikolsky, Dmitry Yaichkov, and Andrei Ilyashenko. Of these, Ilyashenko (1884–1954) is perhaps the least known: after being forced to leave Russia following the Bolshevik Revolution, he lived out the remainder of his life in relative obscurity as a teacher of piano in Belgium. His Second Exaposteilarion for the Annunciation, “The Mystery of God,” shows that Ilyashenko, much like Kastalsky, conceived his sacred choral works horizontally, spinning flowing chant-like melodies and emphasizing the phrase-by-phrase development of the sacred text with contrapuntally conceived textures that evolve and grow naturally and organically. Put in another way, the musical element works cohesively and integrally with the all-central textual element, as opposed to having a life of its own or simply being a formulaic pattern into which the text is thrust artificially. Clearly there are some marvelous examples of such musical-textual synthesis in the works of the Russian masters of the early 20th century that have yet to be discovered and emulated.

Like the other CDs by Archangel Voices, Panagia is available from Musica Russica.

* The icon of the Platytera featured on the cover of the CD is by Dmitry Shkolnik.