The presence of furniture reveals the welcoming and comfortable aspect of the Kingdom of God. All is not judgment and fear in church. We are called to attend church as though we are coming home. It is so easy for a church (especially a Neoclassical one) to seem to visitors like a museum and courthouse rolled into one. (Don’t touch anything, lest you break the rules, and leave quickly, before you are judged.) Furniture can do much to soften this impression. It should be warm and approachable and invite the touch. And it should be beautiful and fine. If we would not furnish our homes with furniture made from plywood and gold spray-paint, then we ought not to furnish our churches in this way. To be comfortable to touch, furniture must be solid wood with a good polish and wax. It should be light and elegantly proportioned, easy to look at and easy to use. Staining is to be avoided, because it robs light-colored wood of the opportunity to naturally achieve the warm color that comes only with time. Ornamentation, such as carving or inlay, should be integral to the structure, and not glued onto the surface as an afterthought. Above all, church furniture should be true to traditional woodworkers’ standards for joinery and finish, and should have no pretense towards being finer or grander than it is. Good quality secular furniture is often very appropriate in church, and there should be no fear of using it just because it does not bear crosses and eagles. Custom-made furniture can follow any of the old styles, including traditional American styles. Old American furniture has wonderful dignity and simplicity, and is an excellent candidate for the ‘baptism’ of American culture into Orthodoxy.

Keeping this in mind, I would like to introduce our readership to a craftsman who is ‘baptizing’ the American tradition of furniture-making into Orthodox ecclesiastical uses, utilizing very creative and eclectic sources of inspiration. Robb Carey (whose business can be found online here) came to my attention by way of a single piece he created for the Monastery of St. John of San Francisco in Manton, CA. 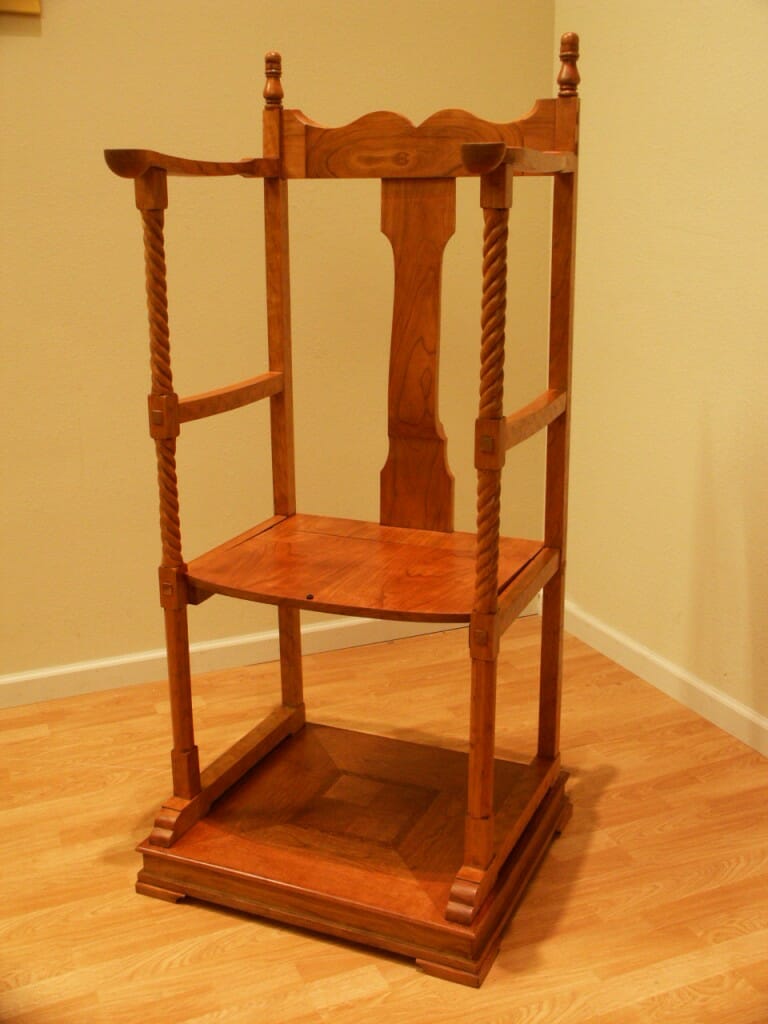 Abbot’s stasidion made by Robb Carey

Take a look at some of the details of the piece’s construction.

This piece is actually just one of a series of stasidia Carey made for that monastery, all of which are a beautiful blend of Greek/Byzantine precedent with American woodworking tradition. 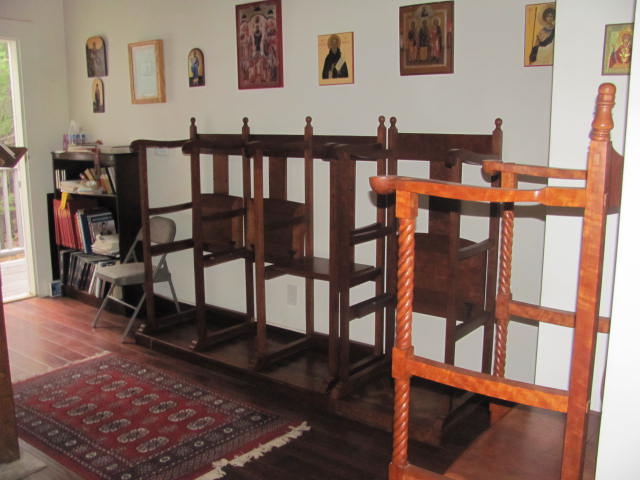 The abbot’s chair in the foreground, other stasidia behind.

I had the chance to talk with Carey about these pieces, his background and his other work and I offer our readers that interview below:

RC – My first attempts at woodworking were in my grandfather’s basement shop around 1970. I was in college as a sculpture major at the time. It was not until 2004, when I opened my own business, that I was able to build furnishings for the Church.

OAJ – Can you tell me about your design process and vision when creating ecclesiastical pieces?

RC – I use AutoCad drafting software to begin my initial sketches. I may have a verbal description of what is being commissioned or have some magazine clippings showing a general design concept. Let’s say I want to build a chair for somebody. The dimensions for a chair are dictated by the size of the human body. To sit comfortably, the average seat height is about 29” off the floor. The width of the seat could be from roughly 18” to 24”. The back should support the shoulders and the arms can naturally rest at 90 degrees on the arm rests.

In order to visualize what I want to make, I’ll consult books on chairs, perhaps a scrap book of magazine clippings of different designs that appeal to me, or Google images. I’ll take details from any number of chairs or architectural elements and recombine them. Also, in my shop I will fabricate an arm shape or a back rest that comes from my imagination in order to come up with something that “works” with the other elements I’ve decided to use.  Most of the time, as I build the piece of furniture, the design changes as I go along, what I would call “design/build”. From an engineering standpoint, I need to pay attention to how much weight the chair is going to hold and what kind of joints would provide the appropriate strength? I prefer to challenge myself with each new project, trying something I haven’t done before. If a new technique or particular element is successful, it probably would show up in my next design. Then there will be continuity in my work. For me, designing is the most satisfying part of a project.

OAJ – The abbot’s stasidion looks like a clearly American interpretation of Greek/Byzantine precedents. Was this intentional?

RC – Yes and no. Square one is that the idea for a chair to help a monk stand up and stay awake until the end of a vigil comes from Greek monasteries. This design included two sets of arm rests, high and low, a seat that folded out of the way when standing and a base to raise up and distinguish a monk from a layman. From that basic premise sprout details that were absorbed consciously and subconsciously in my brain from growing up in America. It is interesting that most Greek stasidia are joined together to form three, four or five seats. For the monastery where the abbot’s chair was going, I made some double and triple stasidia first. It was reported back to me from the monks that were going to use these chairs that they wanted only single stasidia from that point on. Is that American individualism? I would have built the abbot’s chair with a seat the shape of a Shaker Windsor chair because I personally like that shape, which is definitely an American influence. But the abbot thought that would not be appropriately traditional. The carved roped columns holding the upper arm rests are a Russian influence. Sadly, I didn’t appreciate that style at first until I was finally actually able to carve that shape! Then I liked to use the roped column to “show off”. That is what Russian architectural elements seem to be doing in my view. Use sparingly! I decided to curve the back rest, which may be an influence from Sam Maloof (although I wouldn’t build a chair like his) and crown it with the shape of a Gibson guitar headstock. I don’t know where the design for the upper arm rests came from but they took me an extra couple of days of R&D to come up with them. I just wanted them to look different.

OAJ – Are you currently accepting commissions or do you have any ongoing projects?

RC – Currently I am designing and building a bookcase for a ROCOR Church in San Francisco. The Cathedral was originally built by Anglicans around 1878. It was constructed of awesome clear heart, first growth California Redwood in an English Gothic style. I’m enjoying taking my favorite details from the building and scaling them down to put together a compatible piece of furniture. After that, my wife wants me to finally, after thirty years of patiently waiting, remodel our kitchen! So who knows when that will be done?

OAJ – About the artisan: Could you tell me a bit of your background, your artistic formation and inspirations in your work?

RC – I took one art class in high school and a lot of music. The summer after graduation I drove my grandparents all the way around the United States visiting friends and family. Then I went to California College of Arts & Crafts in Oakland where I studied Sculpture and Photography. After that I became apprenticed to a woodcarver in the Sierra. When that had run it’s course I needed to figure out a way to make a living so I decided I would like to build cabinets. I worked in the cabinetmaking industry on and off for the next 25 years until I started my own business. My favorite painter is Mark Rothko, my favorite sculptor is Stephen DeStaebler, my favorite saxophonist is Gene Ammons and my favorite photographer is Minor White. When I converted to Orthodoxy ten years ago, I left behind secular visual influences to embrace the rich Tradition of the Church. Glory to God.