By Vladimir Grygorenko on September 15, 2020 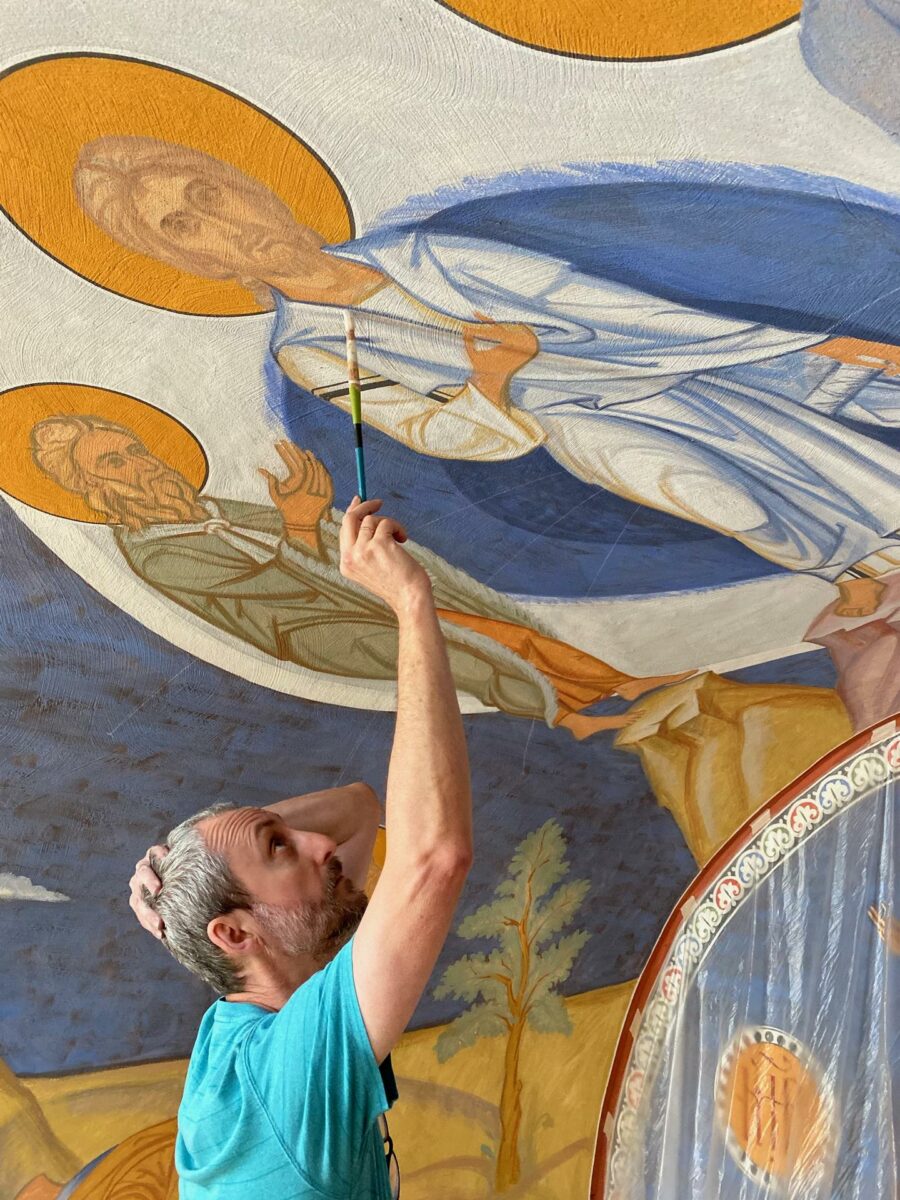 I have been asked to paint the iconographic murals in the new chapel at St. Gregory Palamas Monastery in Perrysville, Ohio. This chapel, dedicated to St. Gregory Palamas, is yet another good example of contemporary Orthodox architecture. It unites the traditional appearance of Byzantine interiors with the familiar exterior detailing of rural vernacular architecture. It was designed by Andrew Gould and built in 2019, in the heart of Amish country. Simple but elegant from the outside, this relatively small building is quite spacious inside, with carefully designed proportions and an attention to detail which characterizes Andrew’s approach to every building he creates.

The interior surfaces were plastered with a lime-cement plaster produced by KEIM USA. These plastered walls, with their natural off-white color, soft edges, and lively texture, produce the simple and authentic appearance of ancient church buildings. A new material for the local craftsmen, the KEIM surface was somewhat overworked, resulting in a more ‘sandy’ texture than expected. 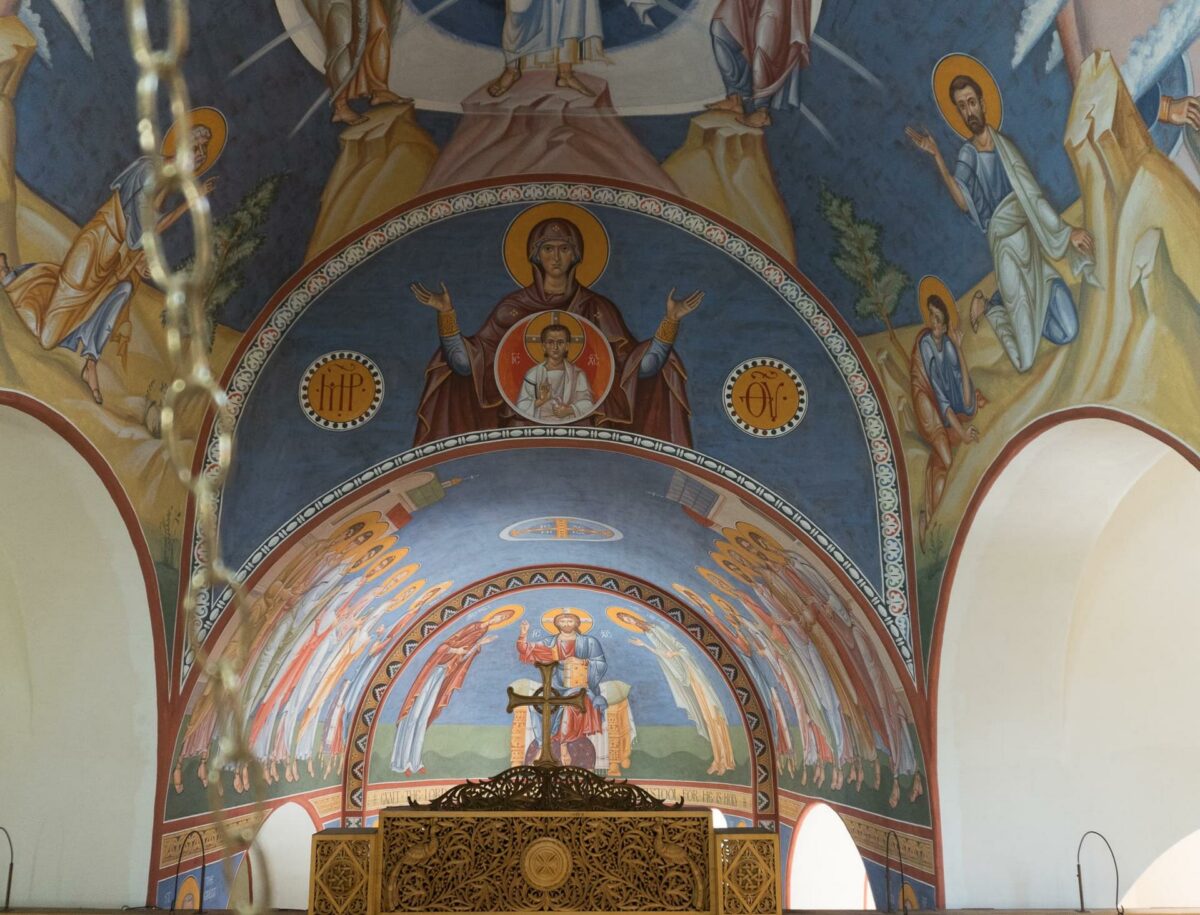 In order to preserve the natural beauty of these walls, KEIM silicate paints were used for the mural project. These mineral paints have exceptional durability for indoor and outdoor application, forming a perfectly matte breathable coating. Closely resembling historical murals made in true fresco, silicate paint is the only paint which could be so successfully applied onto these textured surfaces. 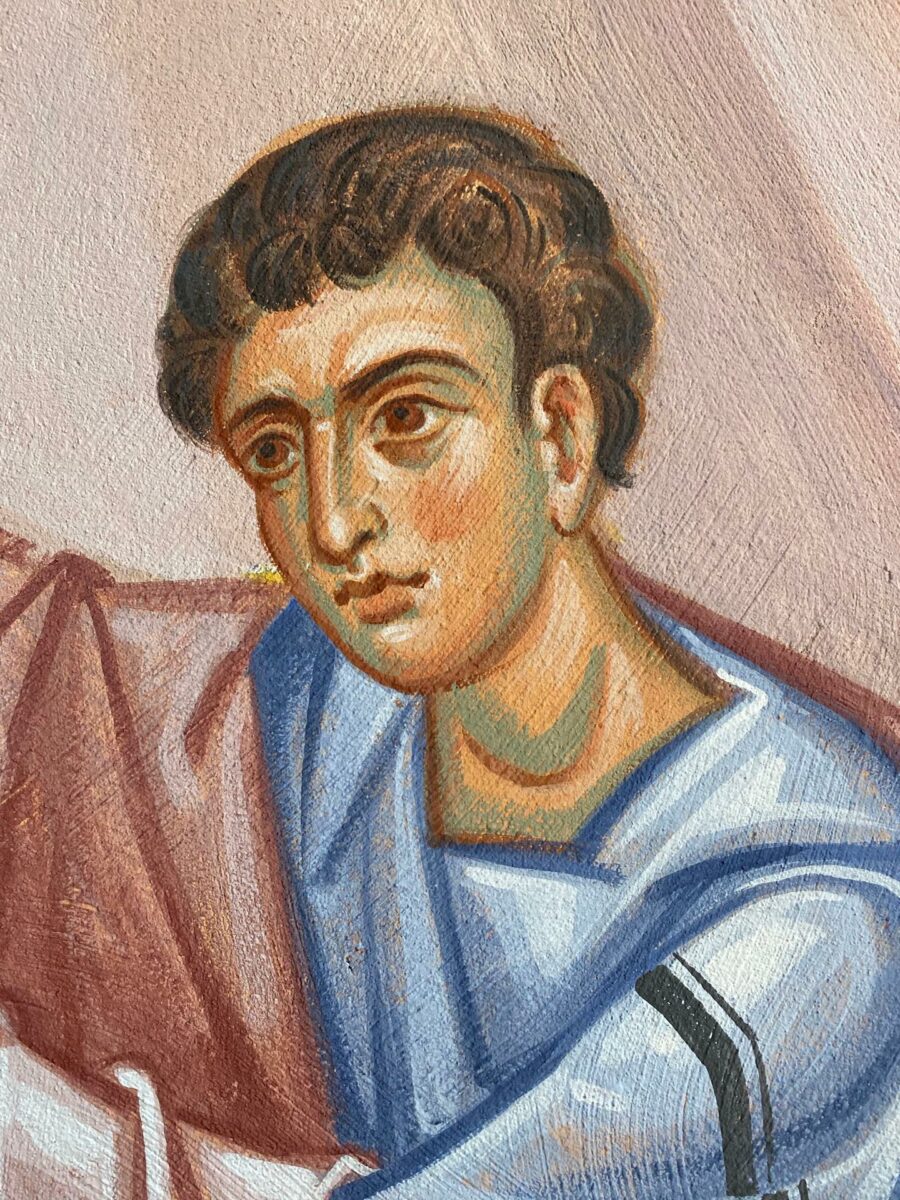 My philosophy is that every single mural in an Orthodox church must be a part of complete iconographic composition – one that would testify about the Orthodox vision of God and his church.

Such compositions must take into consideration every architectural element and spatial feature of a given church structure, the spiritual needs and vision of the local church community, together with other technical and historical elements. In our time, it is simply not enough to copy murals of historic churches and place them with no particular order on the walls of contemporary buildings, stating that this would be a “preservation of tradition.” Such a simplistic approach only leads to poorly-organized wall decoration, which leaves churches cluttered with images, distracting our prayer instead of helping it. 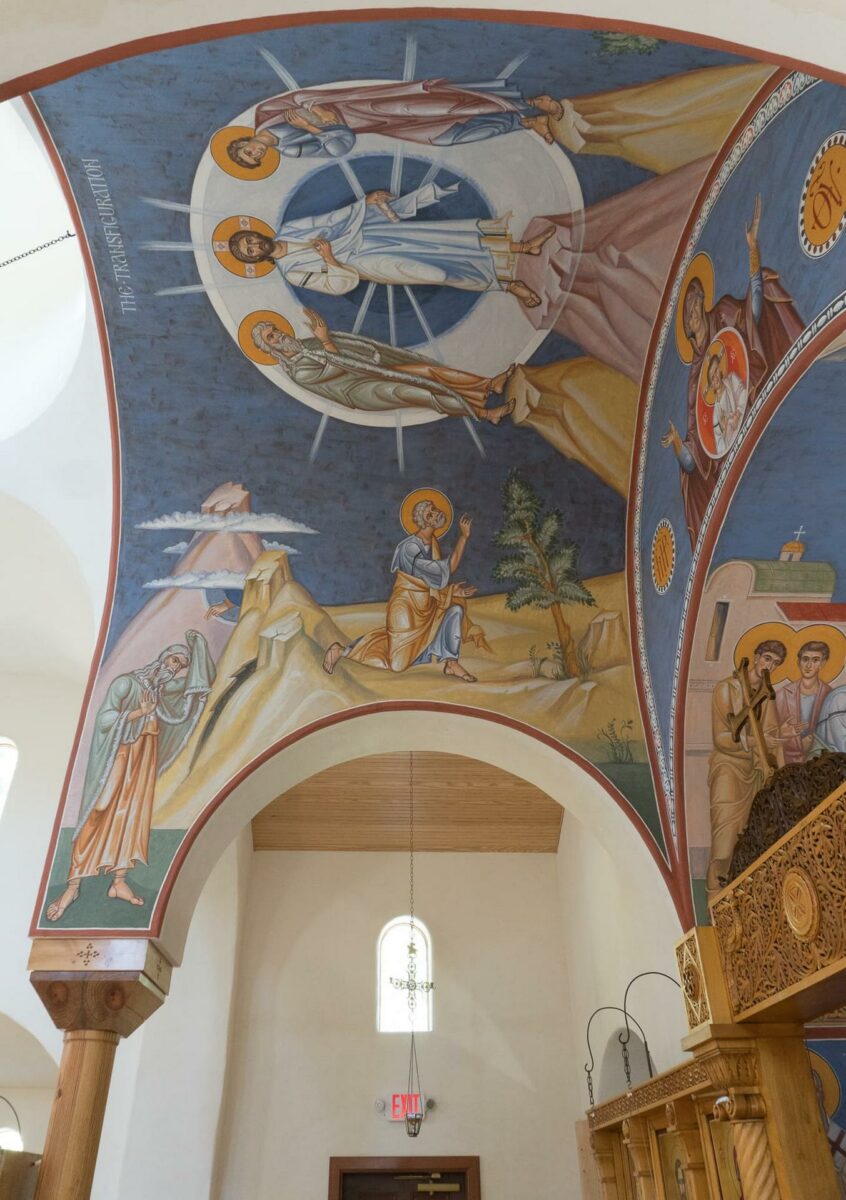 During our initial meeting in January 2020, the monastery Abbot, Fr. Joseph, and I discussed the comprehensive iconographic vision and specific requests of the monastic brotherhood. Though the whole interior may be completed many years from now, the altar and east wall had to be designed as a part of this overall program.

While the Chapel is dedicated to St. Gregory Palamas, the feast of Transfiguration was especially important for the Brotherhood. I was therefore asked to find a prominent place for the mural of the Transfiguration in my composition, and after some consideration, we agreed that the best place for it would be the barrel vault above the iconostasis. The first phase of the project would include the whole altar area and the Transfiguration, with cupola and pendentives to follow at a later time. 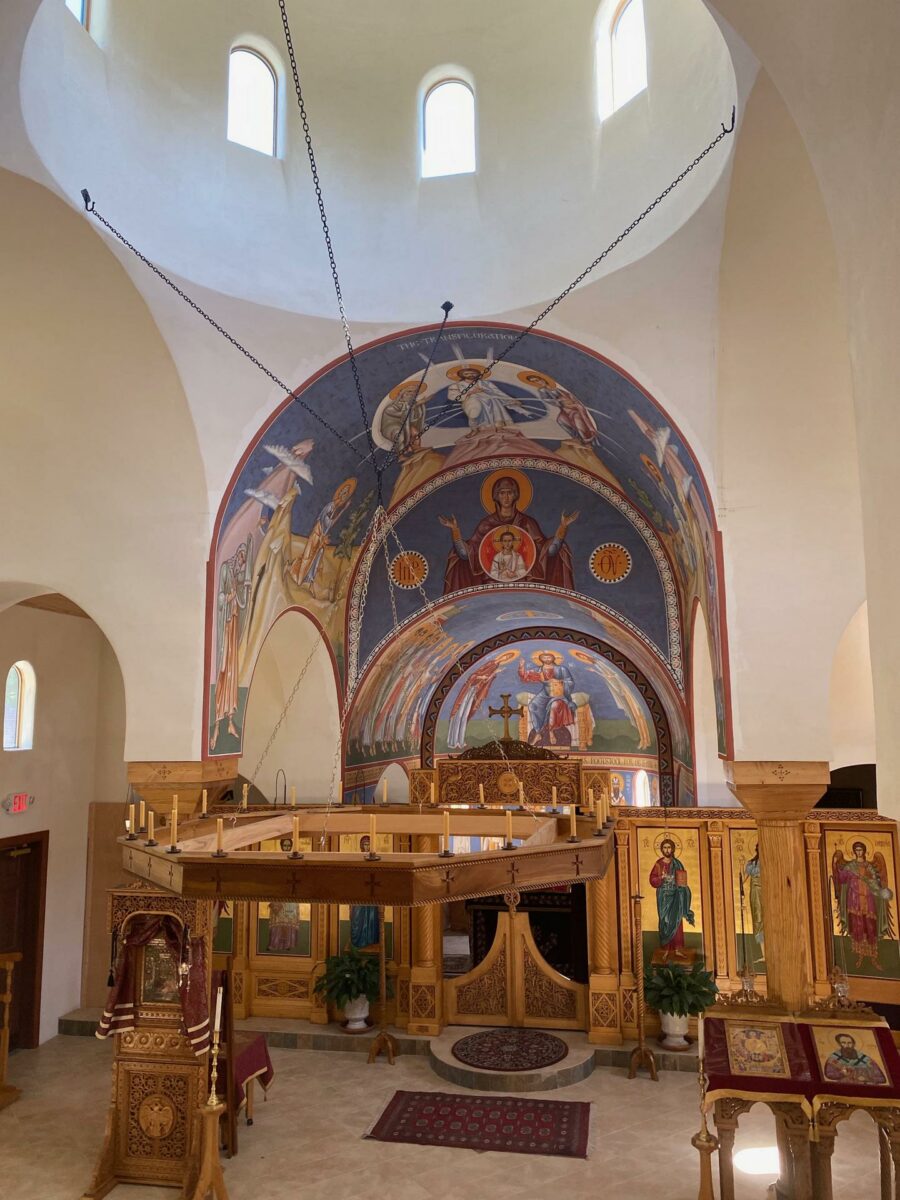 In order to choose the best composition for this complex building, I had to create a scaled 3-D model of this whole section of the church which would be decorated first.

While laborious and time-consuming, this process helped me to feel the space and refine the composition of the Transfiguration, which spans across the whole vault and surrounds the viewer. Together with dozens of various preparatory sketches, this model also saved a lot of time during the painting on the wall itself. 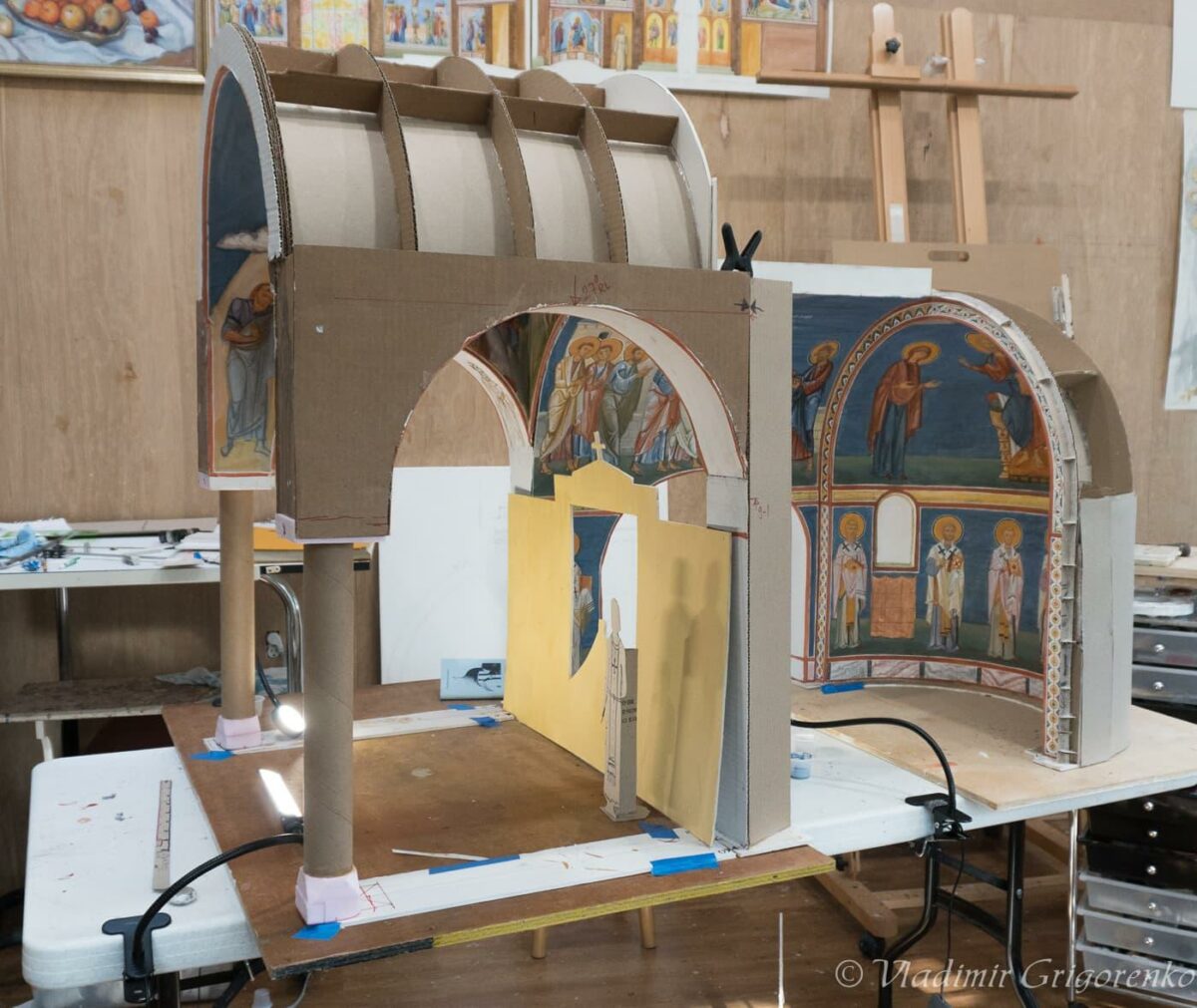 The main theological idea proclaimed by the altar murals is two-fold: it places Christ into the center of our worship and declares that our Liturgy originates from the Last Supper of Christ with His disciples.

The altar area at St. Gregory is relatively low and elongated, which allows no more than two rows of images. The iconostasis, which was retained from the old church, covers the view toward the altar apse from the nave and separates the altar from the main volume of the church.

In these conditions, I decided to move the image of the Platitera from the altar apse and replace it with the Deisis (Christ Enthroned with the Theotokos and St. John the Baptist). The spiritual meaning of this image is explained by the text on the yellow band below Christ: “Exalt the Lord our God, and worship at His footstool for He is Holy” (Psalm 99:5) 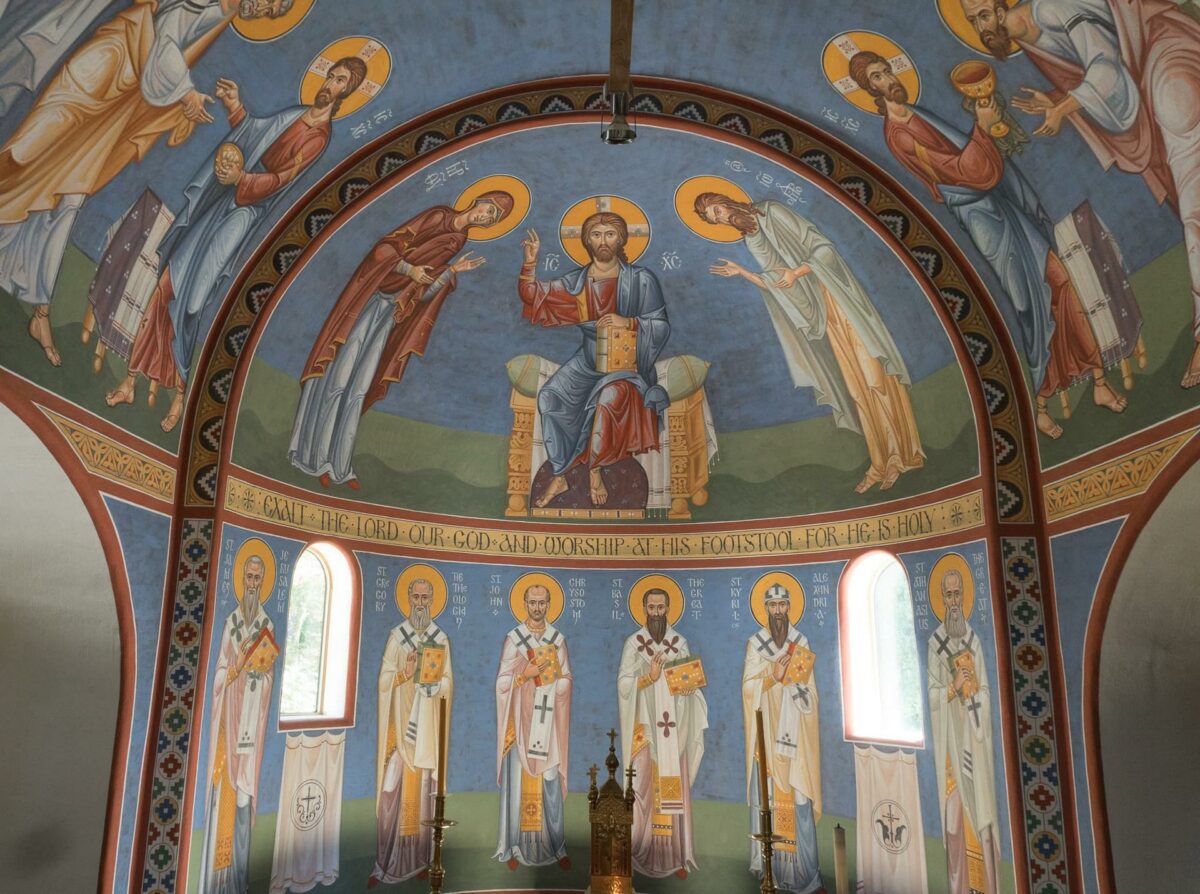 While the image of the Platytera often appears in altar apses, the Deisis is less common, but can be found since the early times, especially in monastic communities. One such example is located in the church of Transfiguration in Mirozh Monastery in Pskov, Russia, painted by Byzantine masters in the early 12th century. 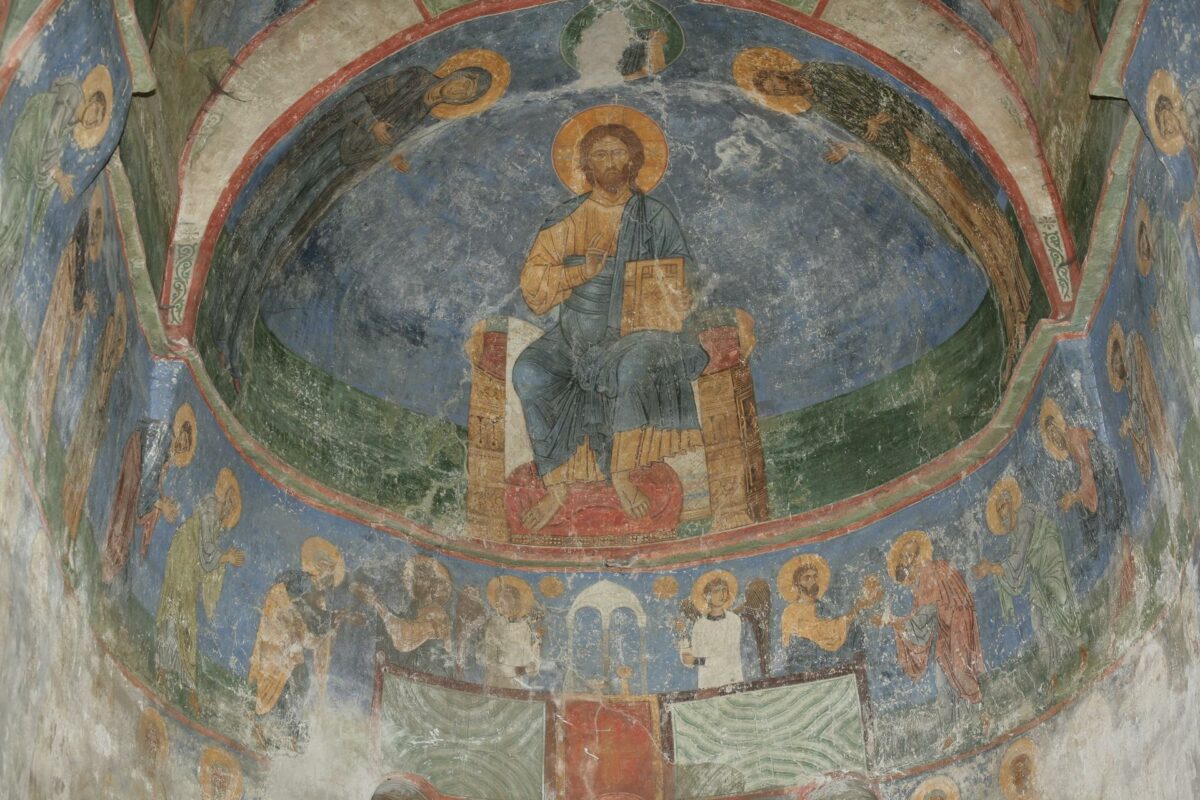 In the Deisis, Christ is depicted sitting on an ornate throne, which is covered with a pillow and a white liturgical cloth. The same cloth is repeated in the surrounding composition of the Communion of the Apostles, as an altar table cover. That little detail should remind us that Christ himself is “offering and being offered” in Communion. 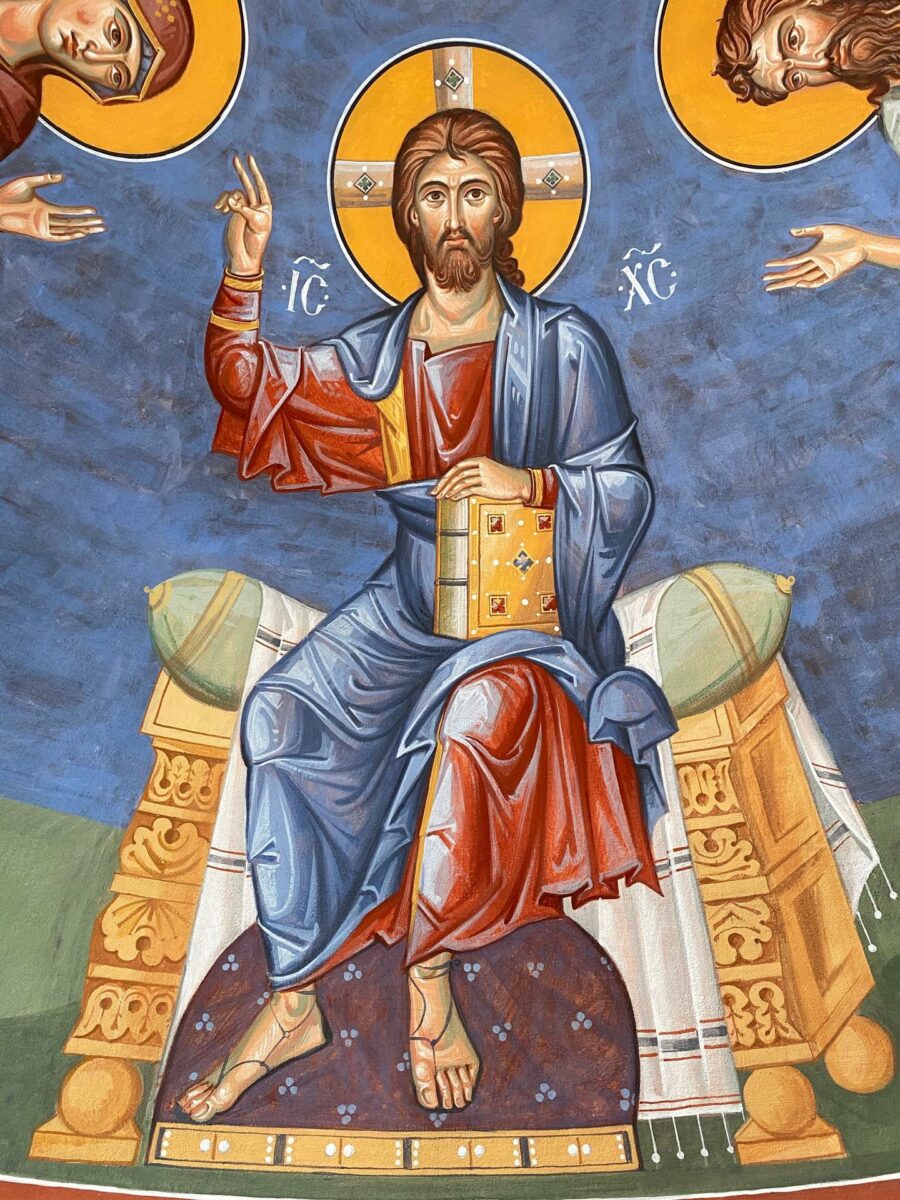 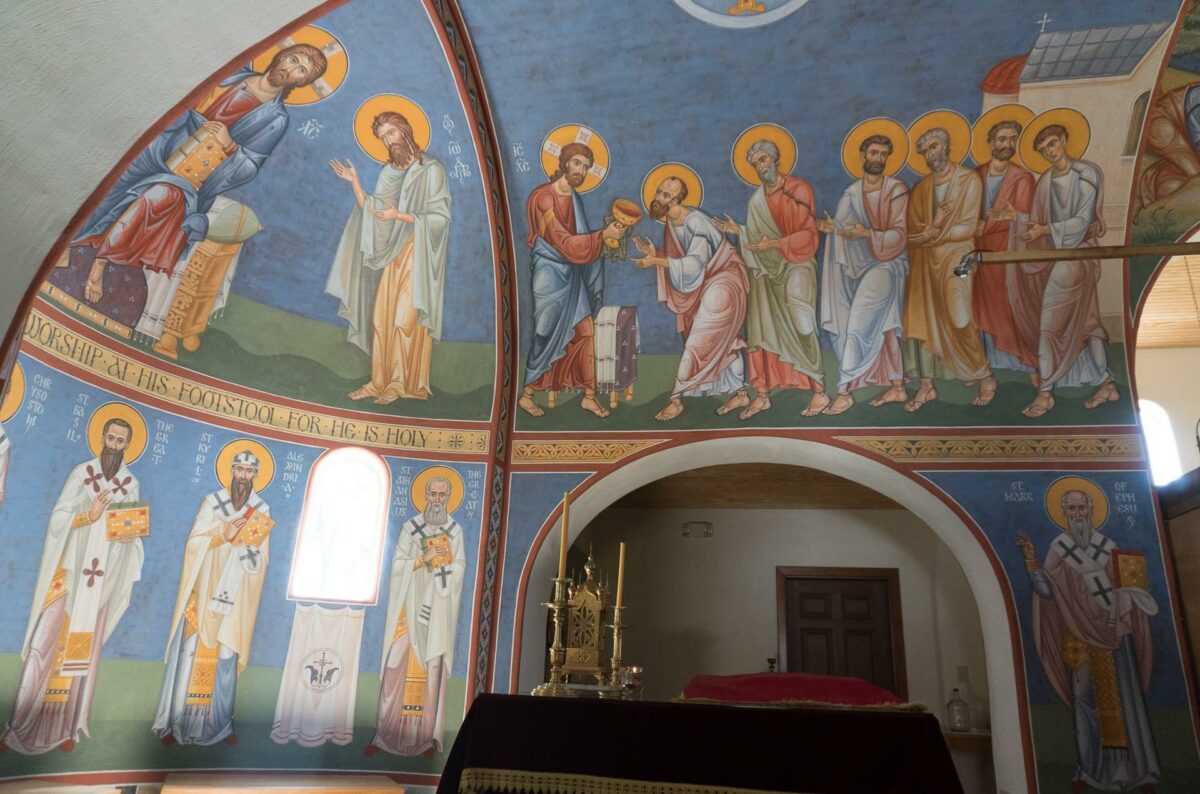 At the lower level, eight Holy Bishops are depicted facing the viewer and surrounding the altar table, co-celebrating with the officiating priest, thus stating the unity between the eternal church of the saints and the local church celebrating the Liturgy here and now. 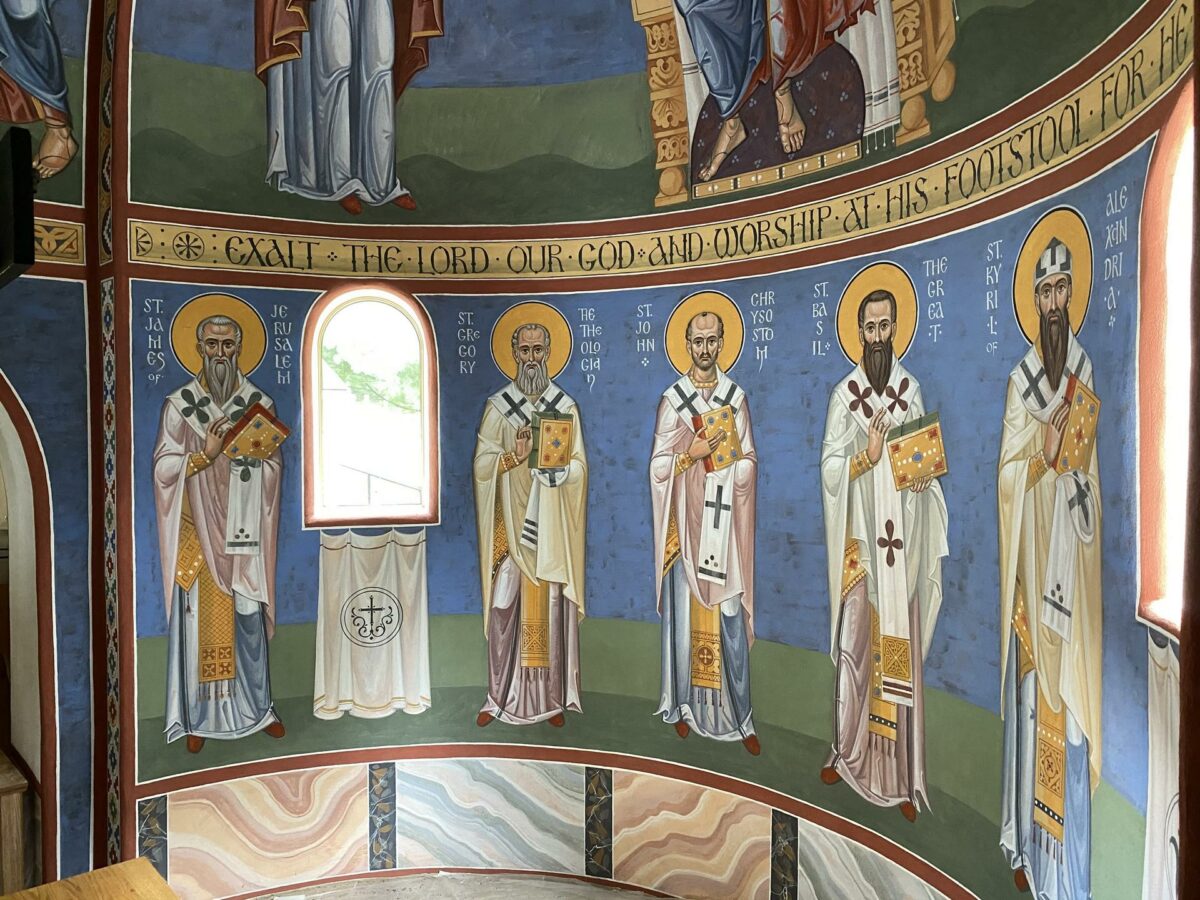 The barrel vault above the iconostasis illustrates the Troparion of the Transfiguration: “Thou wast transfigured upon the mountain, O Christ our God, / Revealing Thy glory to Thy disciples as far as they were able to bear it. / Let Thine everlasting light also shine upon us sinners, / Through the intercession of the Theotokos, / O giver of light, glory to Thee.” 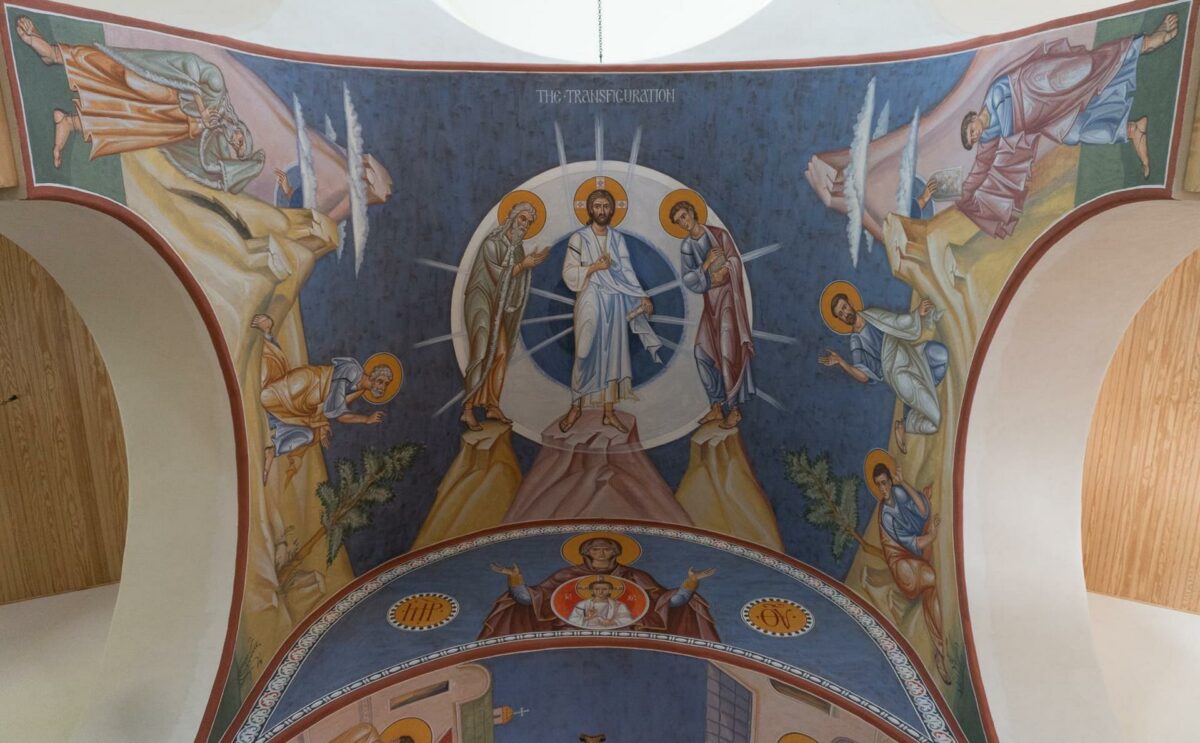 The image of the Theotokos with Christ occupies the area directly above the iconostasis and is separated from the image of the Transfiguration with a thin ornamental band. 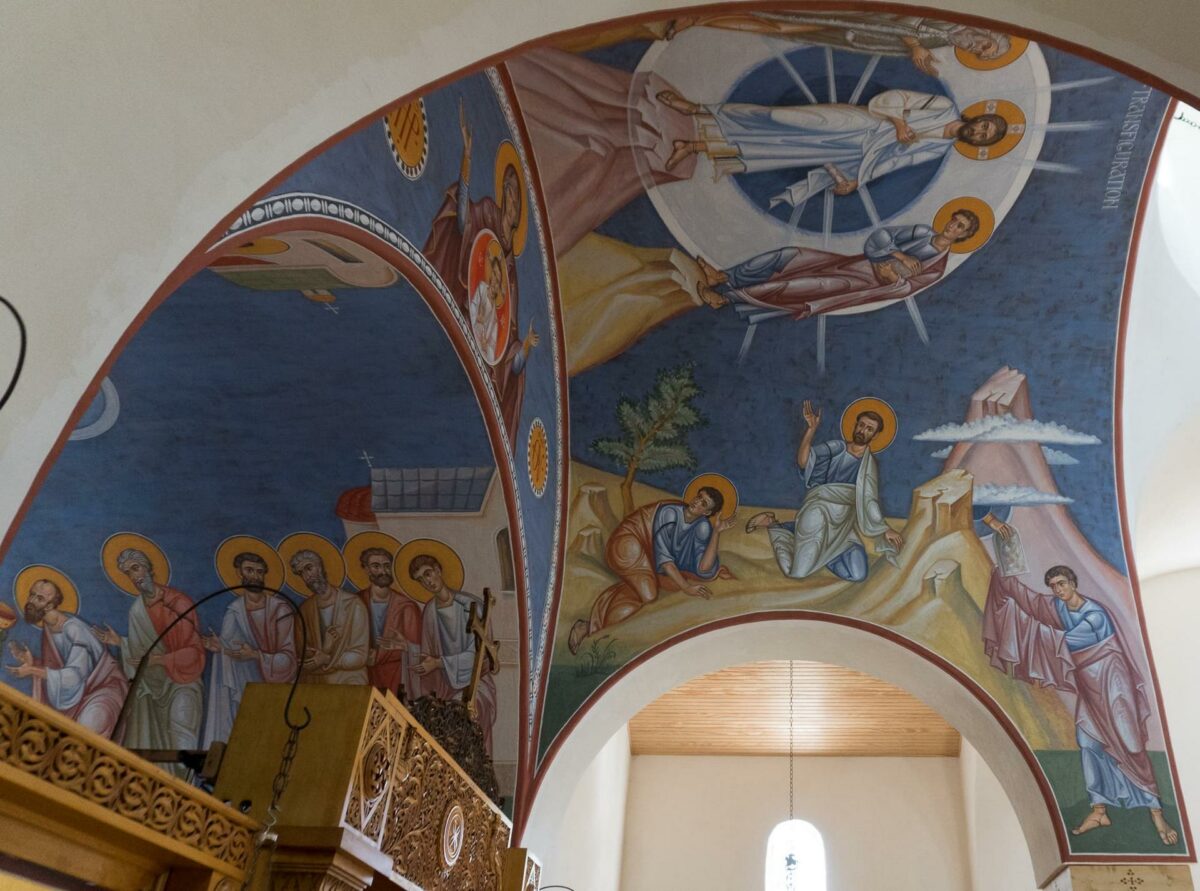 While, according to the Evangelists, the Mother of our Lord had not participated in the event of the Transfiguration, the proximity of these two images allows viewers to contemplate the last part of the Troparion: “Let Thine everlasting light also shine upon us sinners, / Through the intercession of the Theotokos…”

We can also recall another Troparion, for the Nativity of the Mother of God: “…The Sun of Righteousness, Christ our God, / has shone from Thee, O Theotokos!”.

That is why I chose to depict Christ in His mother’s womb in white garments (same as in the Transfiguration above), and in the bright red circle, symbolizing His Glory. The same red color of Glory will be used later for the image of the Pantocrator in the cupola, thus uniting all three compositions by the common theme of the Divine Light. 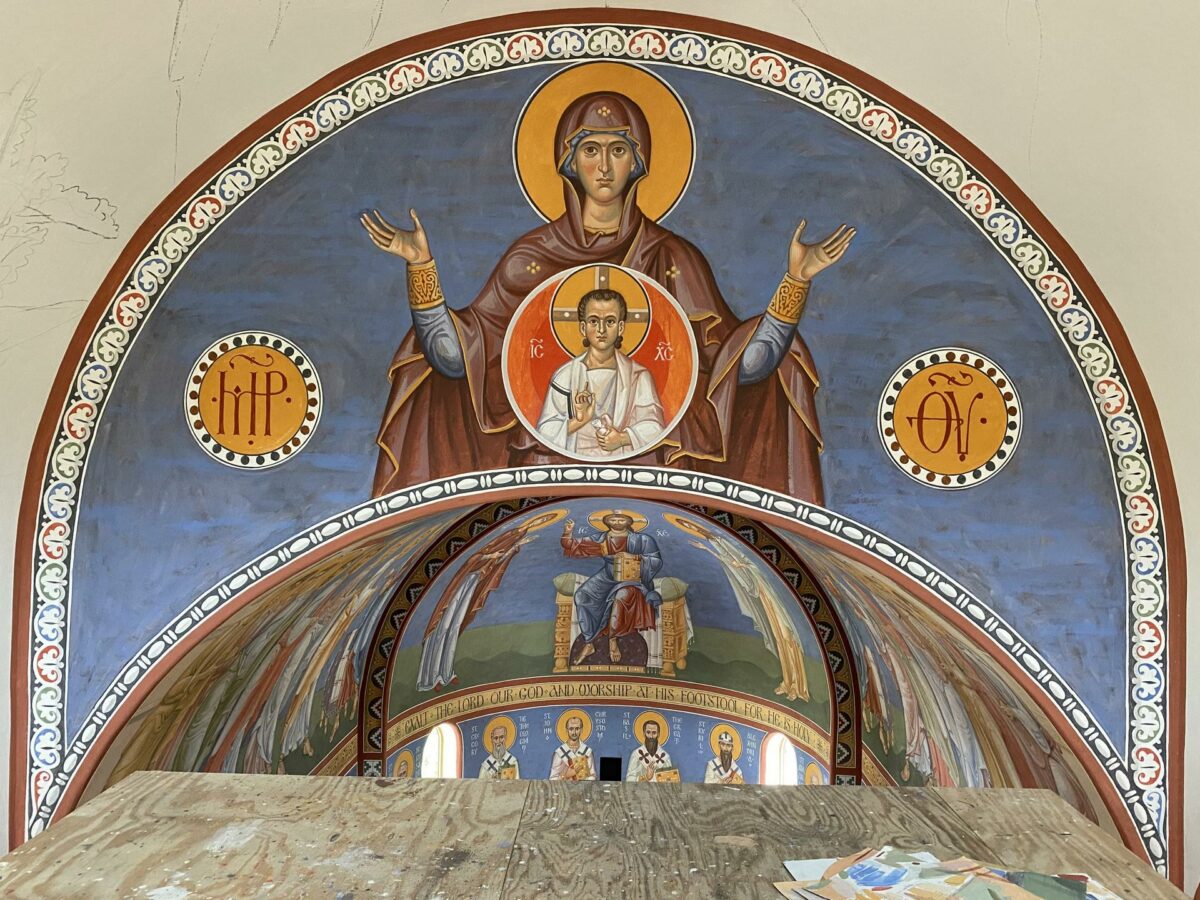 The relatively large area and complex shape of the barrel vault allowed me to expand the traditional composition of the Transfiguration with two related images of Old Testament theophany: Moses receiving the Law (Exodus19:9), and God’s revelation to Elijah on Mt. Horeb (1 Kings 19:11). 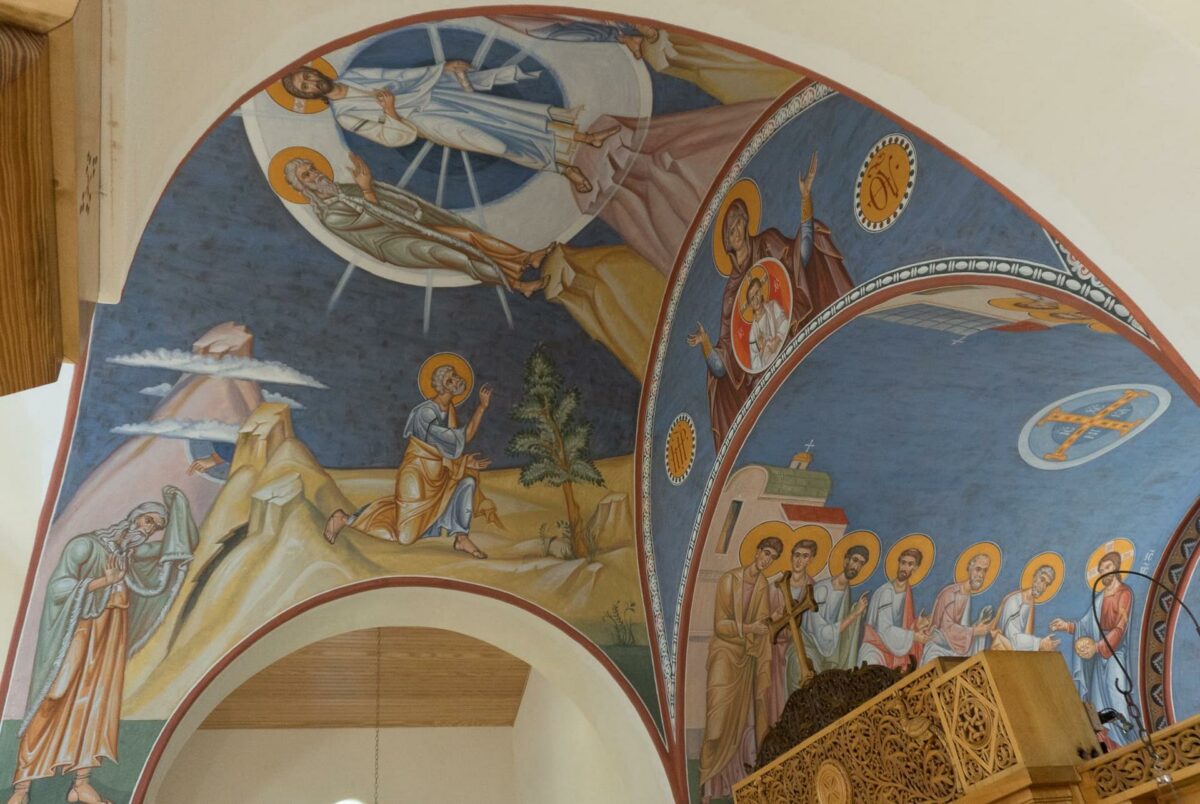 In these Biblical events, both prophets were unable to see God face-to-face: Elijah is depicted hiding from God who speaks to him from the cloud, and Moses, too, can see only the cloud. Only in the transfiguration on Mt. Tabor do they personally meet and see God, who was talking to them before. 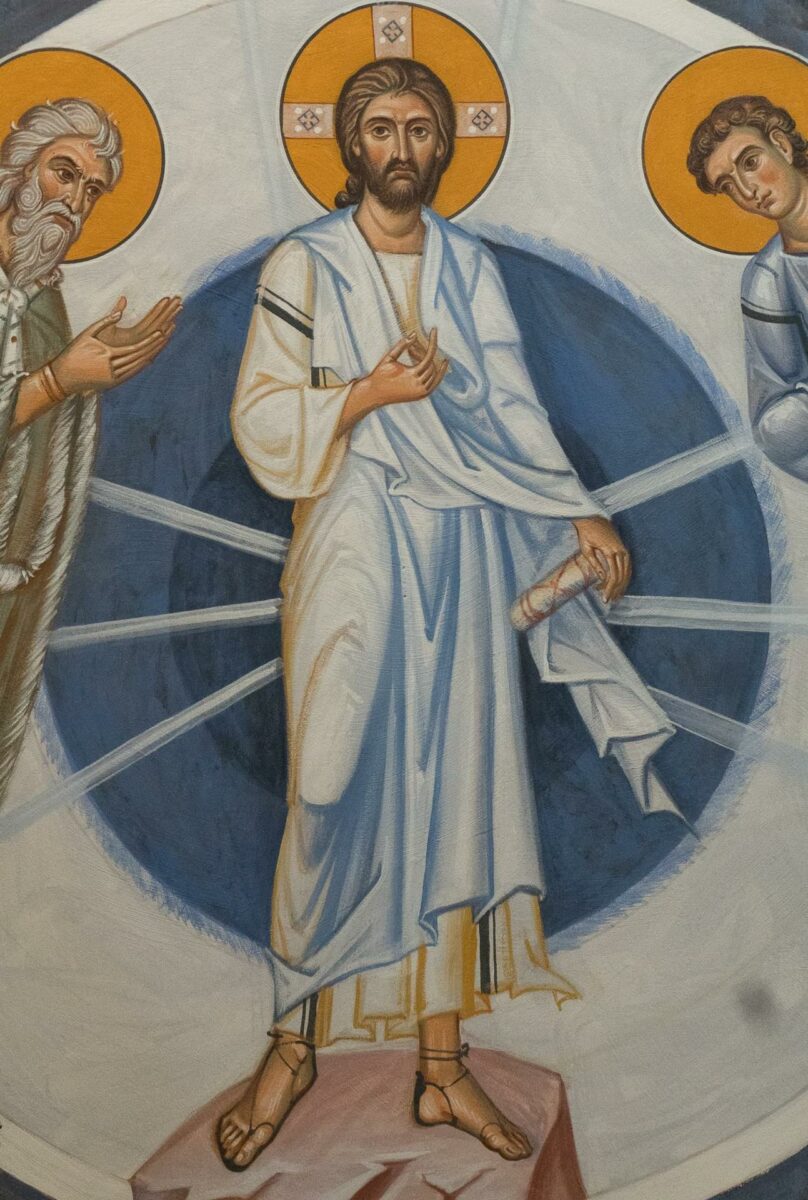 With the great help of my wife Olga Rusanova, who was responsible for the decorative ornaments, the whole project was executed in KEIM silicate paints directly on the walls in only eleven weeks, and without interrupting the liturgical life of the Monastery.

The rough surface of the walls sometimes created mosaic-like effects, which only improves the authentic appearance of finished murals.

According to the Abbot, Fr. Joseph, the Brotherhood of the monastery was very pleased with the result, and is looking forward to the continuation of the project in the next year. 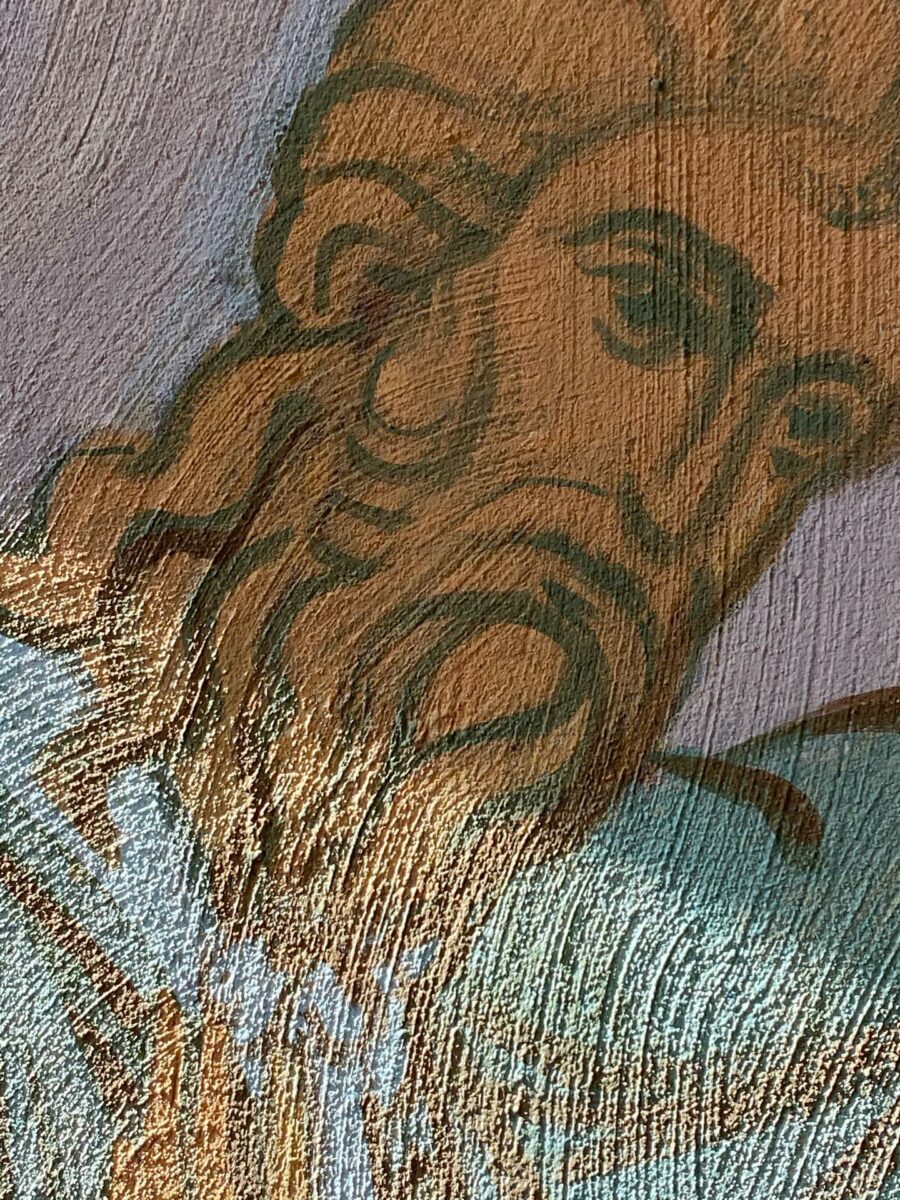 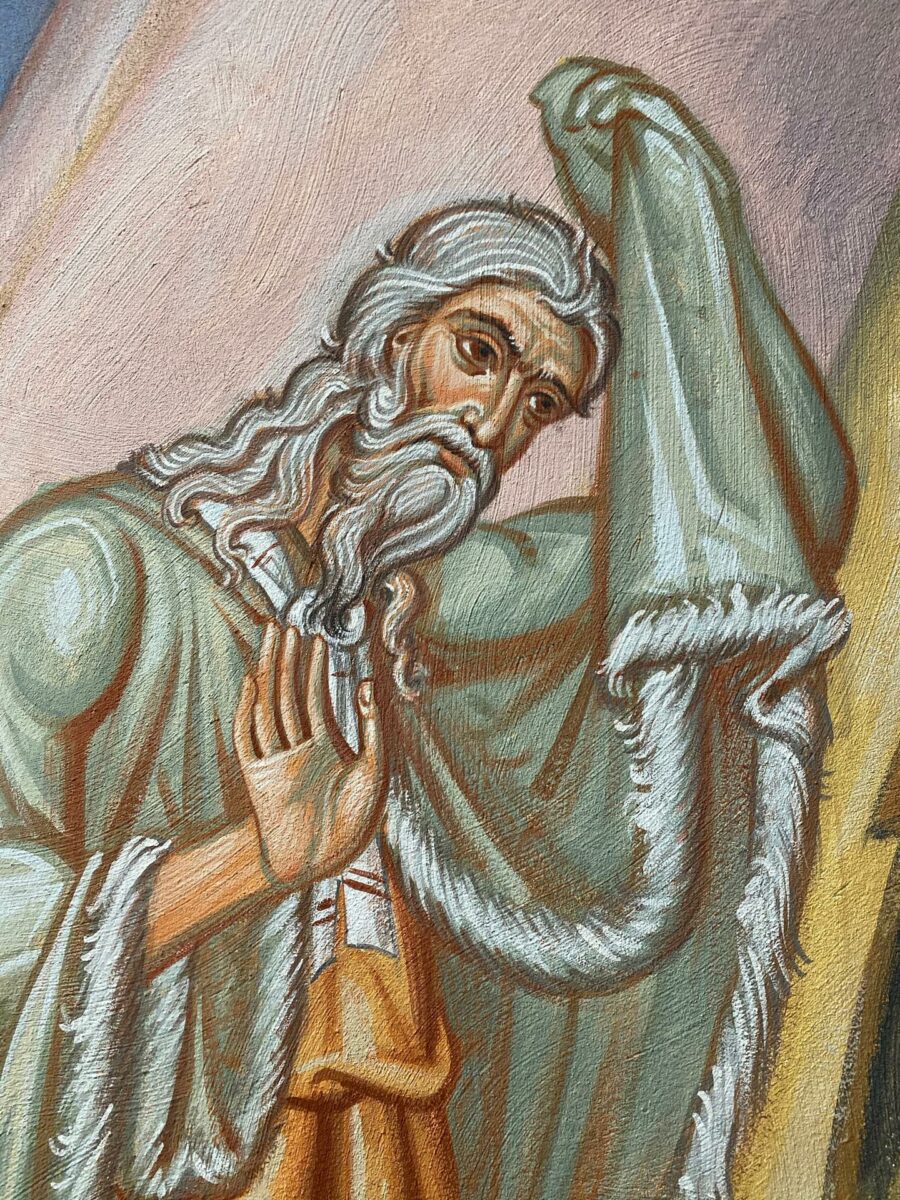 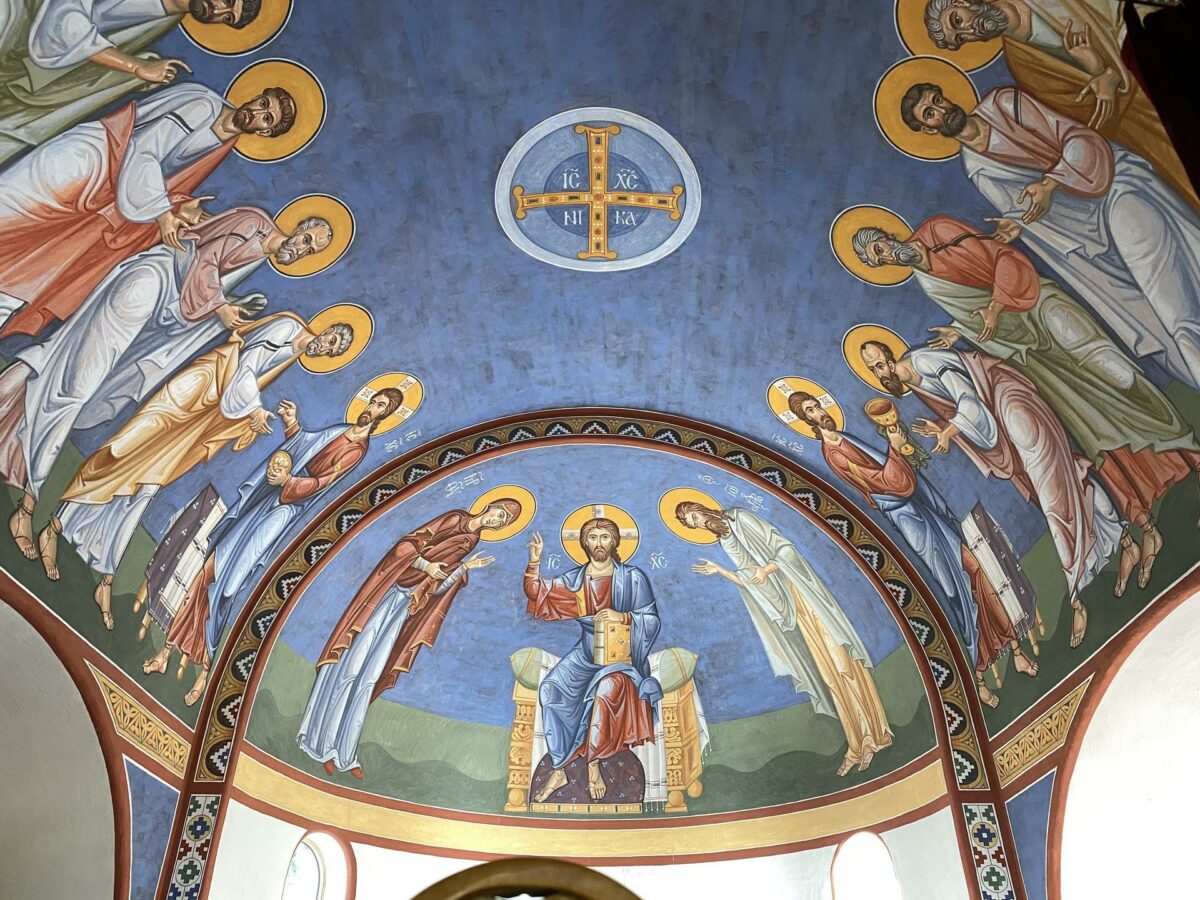 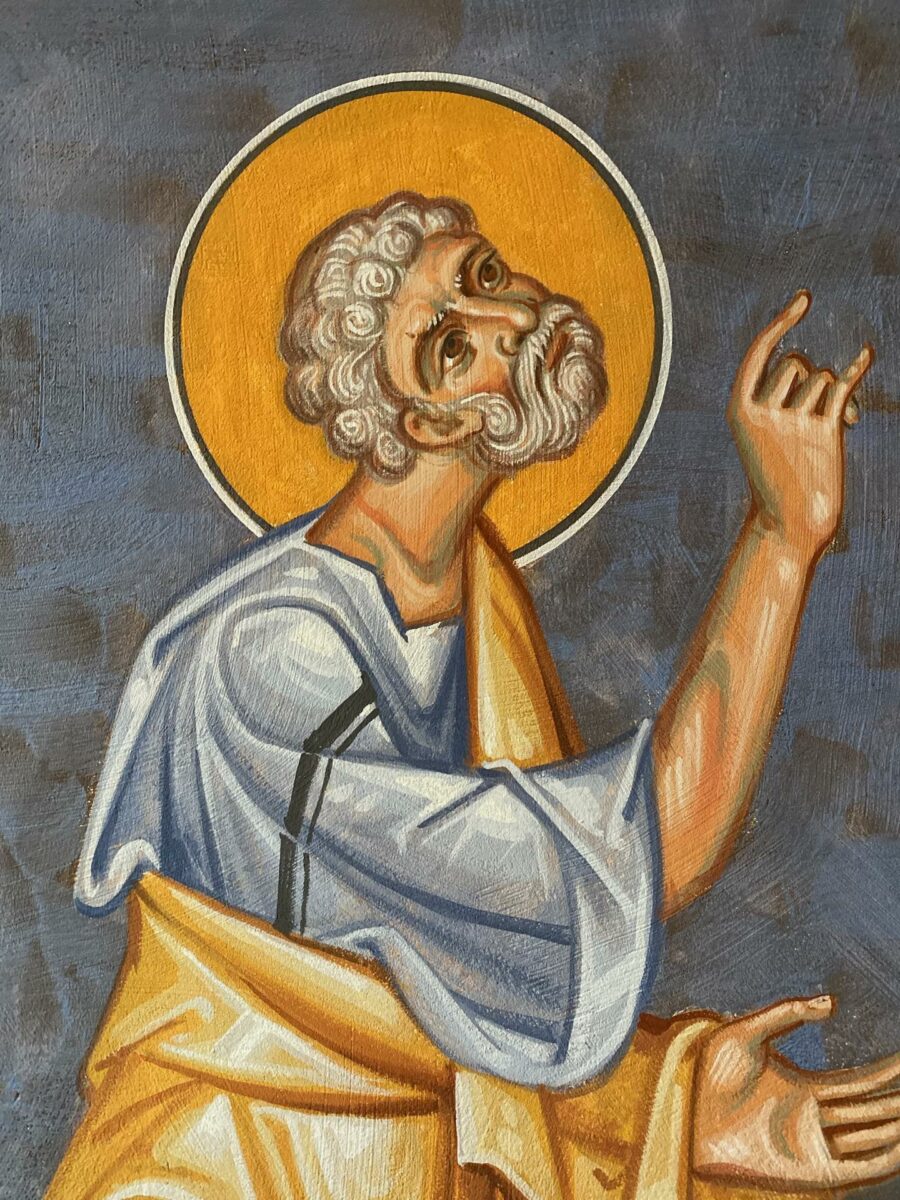 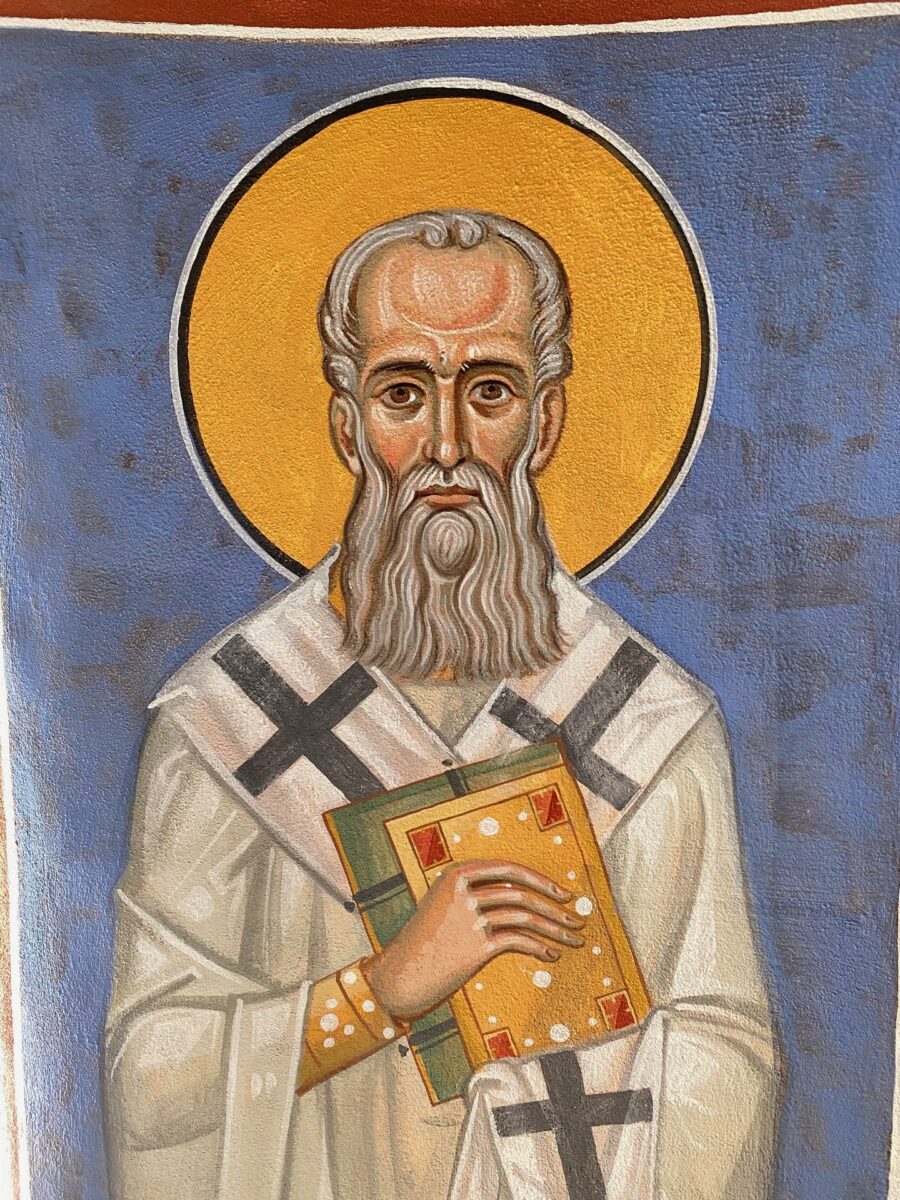 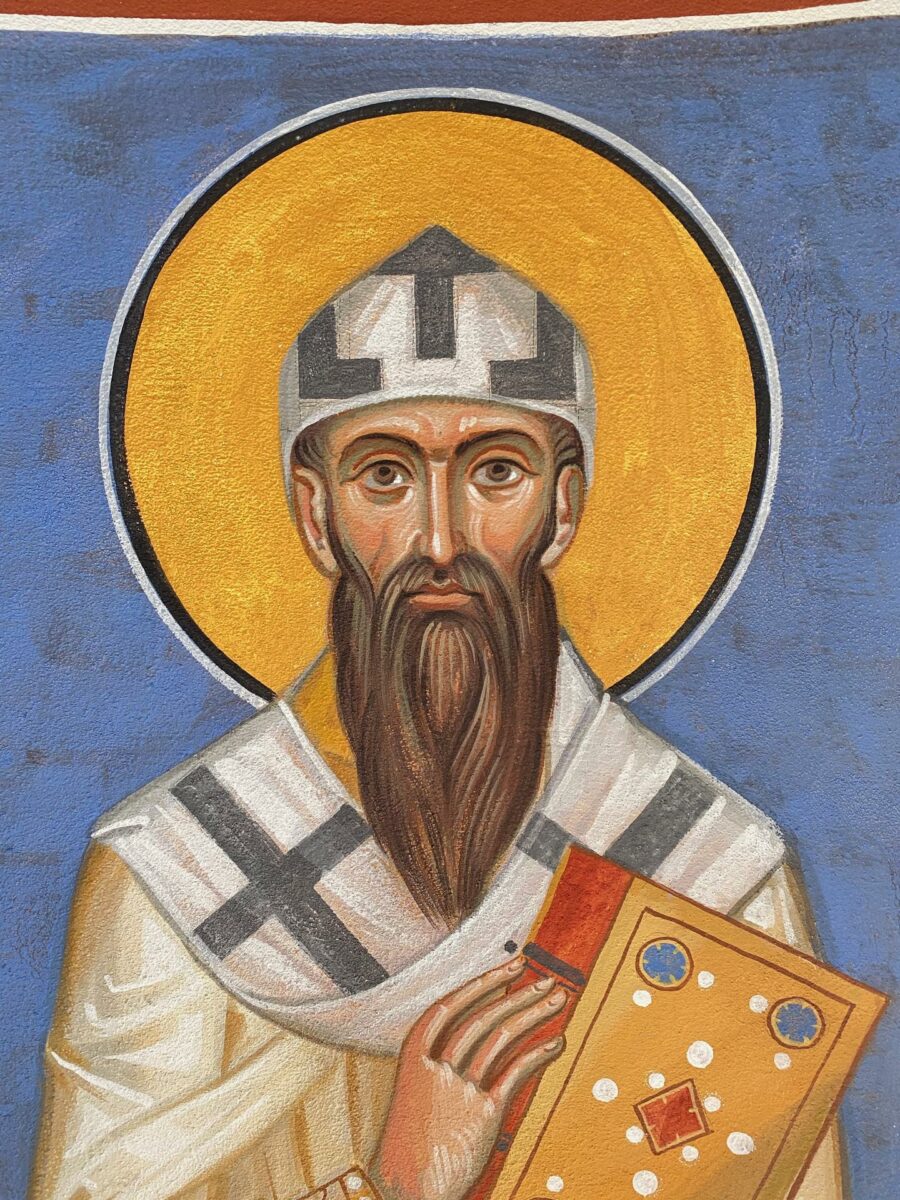 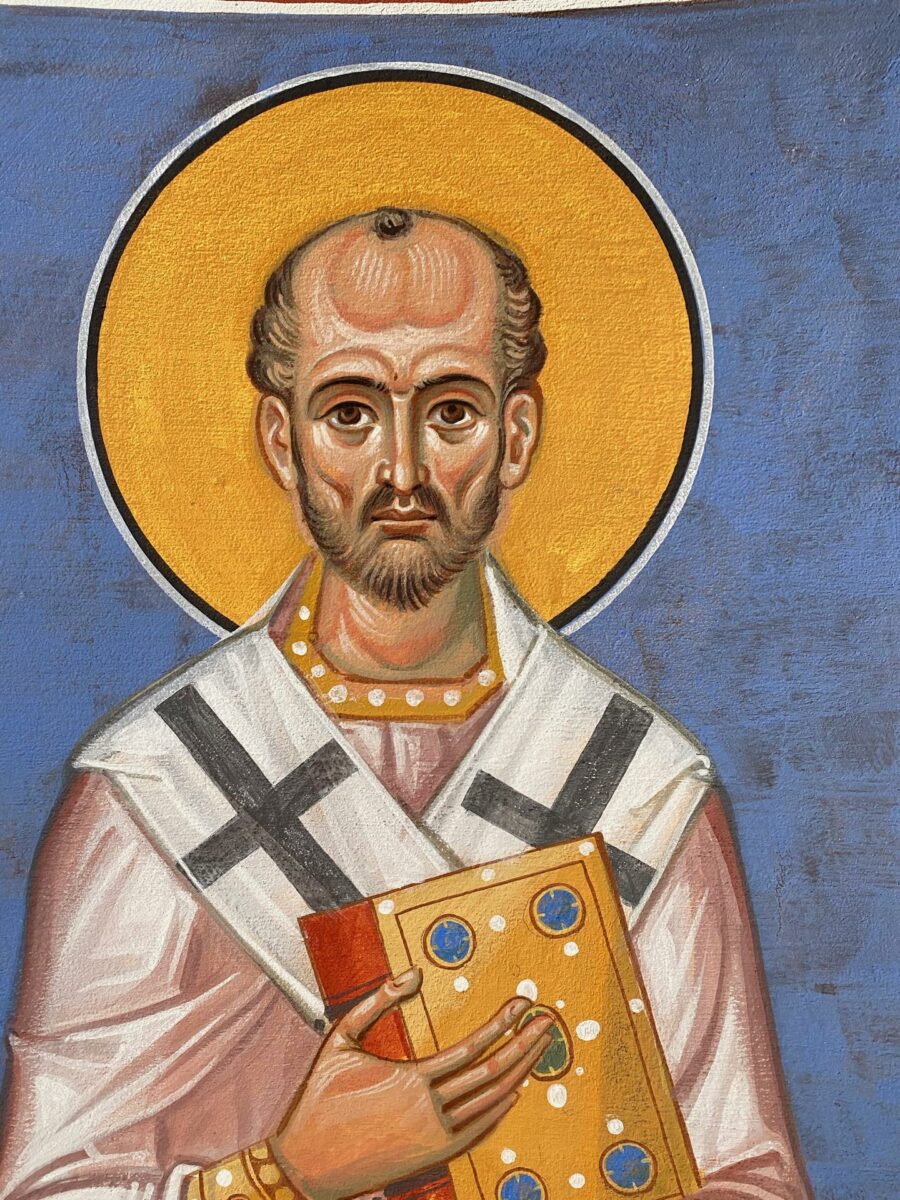 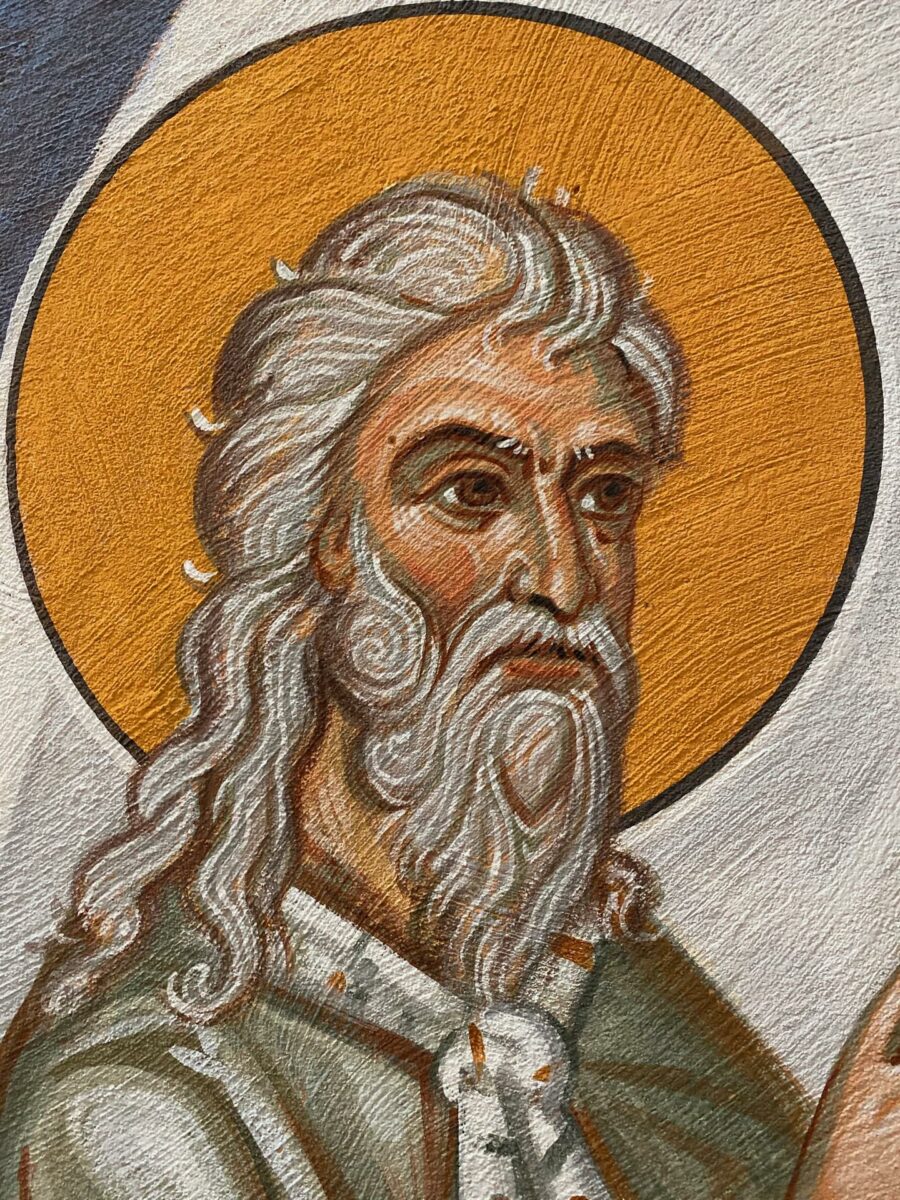 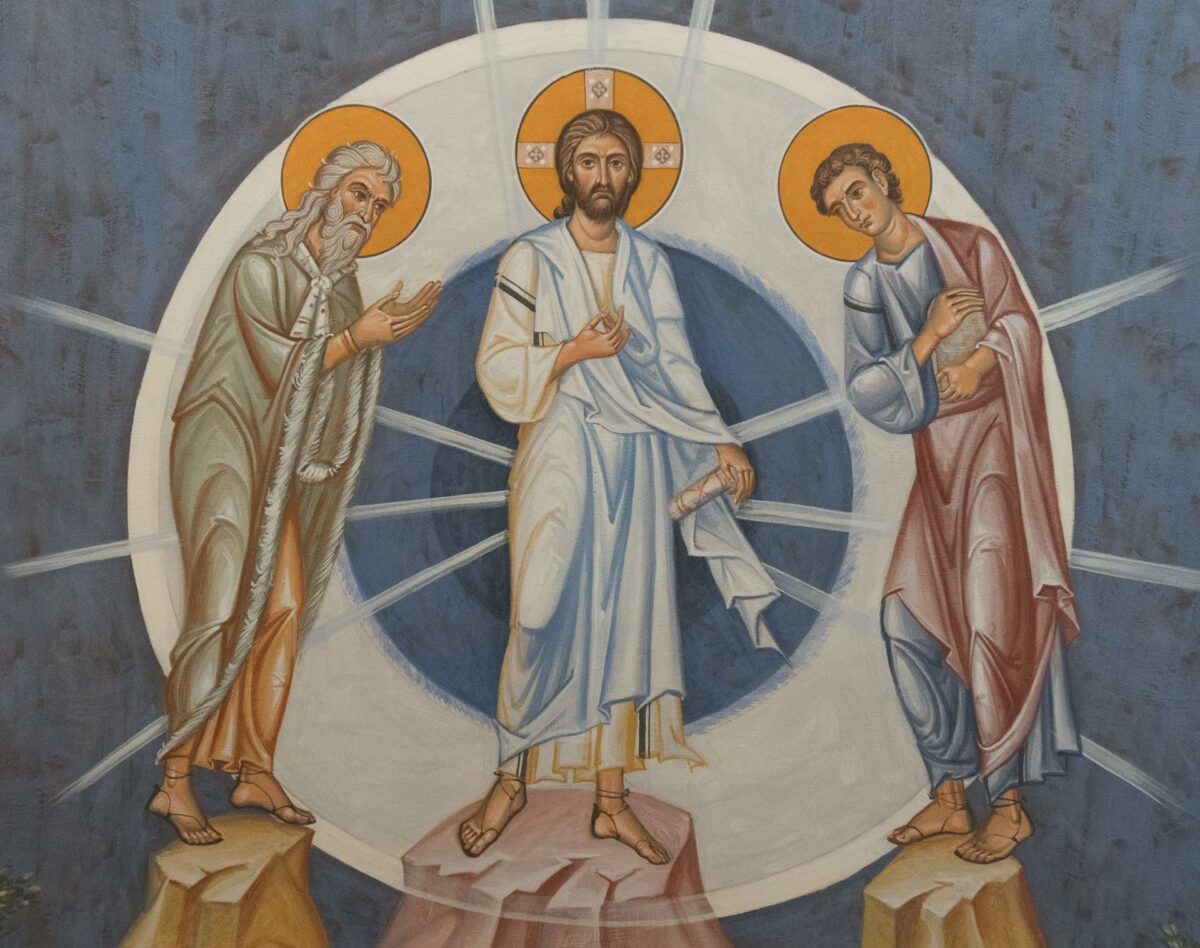 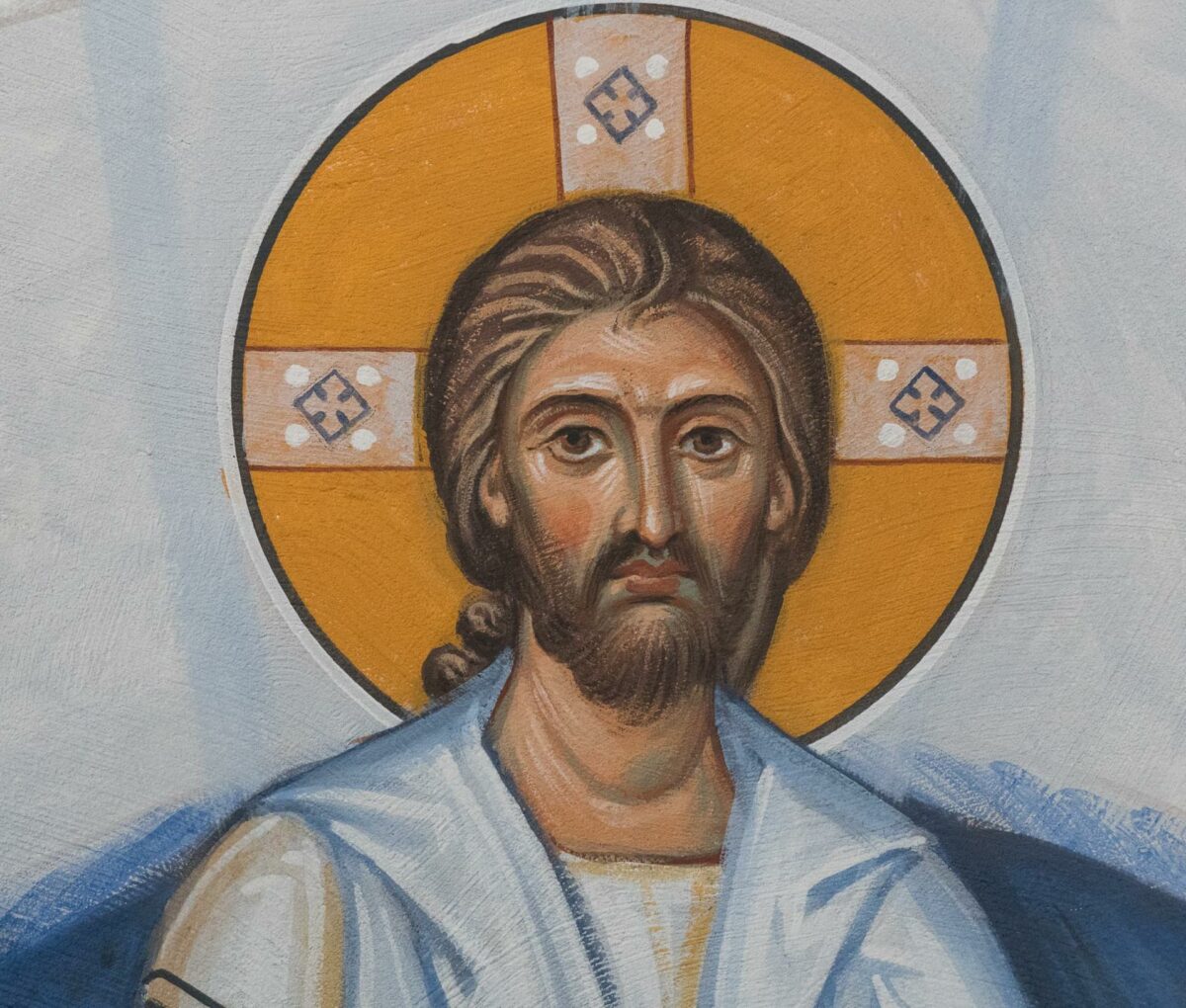 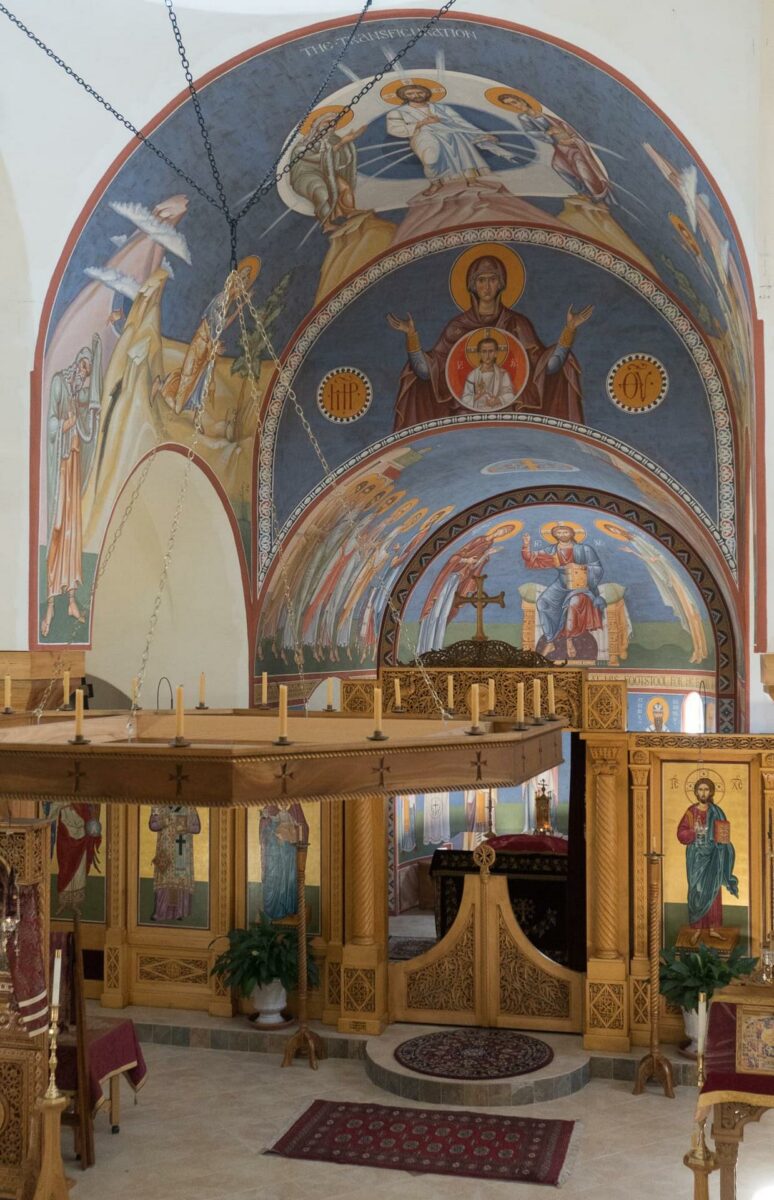 Upon clicking subscribe, you will be asked to give
your first and last name. This helps us personalize
our communications with you. We will never spam
you or share your information with others.
We respect your privacy.