Notes From the Road: Review of “Heaven and Earth” Art of Byzantium at the National Gallery

The NYTimes review of “Heaven and Earth” at the National Gallery in Washington is piquant and enticing, but our readers deserve more detail:

This is a generalist show.  It is a good show for anyone new to Byzantium or if you already know of one of the show’s pieces and would like to see it in person.  That said, the objects in this show are of a consistently high level and of great interest to the liturgical artist.

This is a show about life in Byzantium, which clearly had a religious aspect to it and it is shown, but the religious life is not the focus of the exhibit.  There are two rooms full of coins, jewelry, books (three of which are religious/ gospels) glass vials, lamps, spoons, and sundry every day objects.   In the other rooms, non religious examples of life are shown alongside the religious objects – capitals from columns, table legs, frescos and mosaics next to alter tables, icons and w all paintings from churches.  One room is all icons.  There are 24 icons in all and several illuminated gospels and liturgical books.

Mosaic icons were among the most costly items of Byzantine art.  Very few survive and this is a rare large icon, which reflects the monumental style of the wall mosaics of the late 13th century. 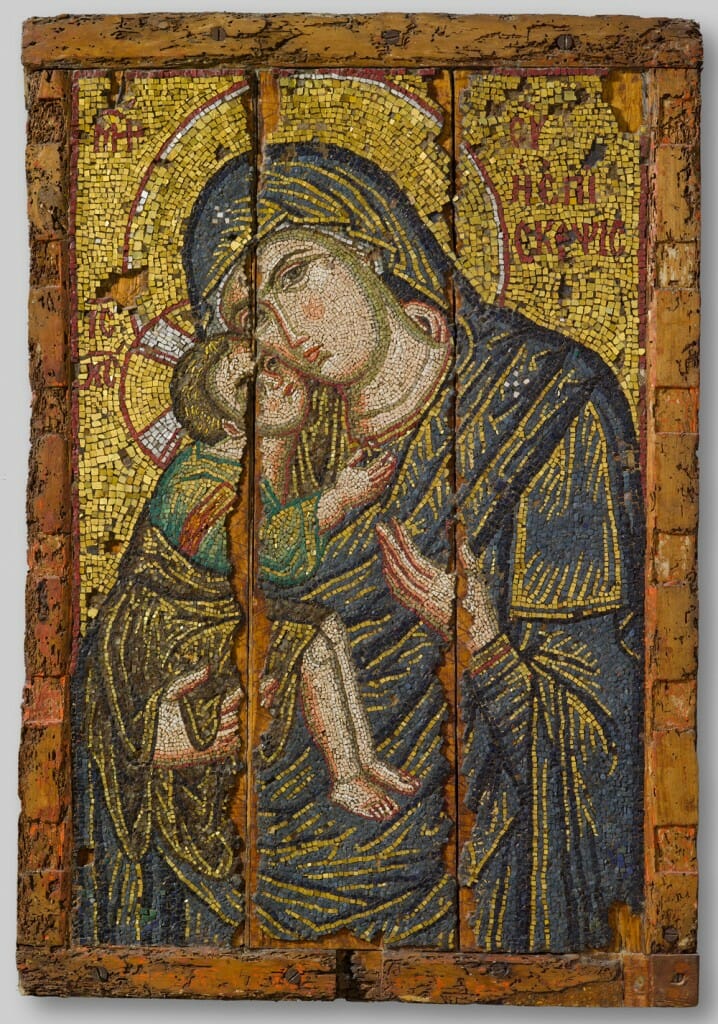 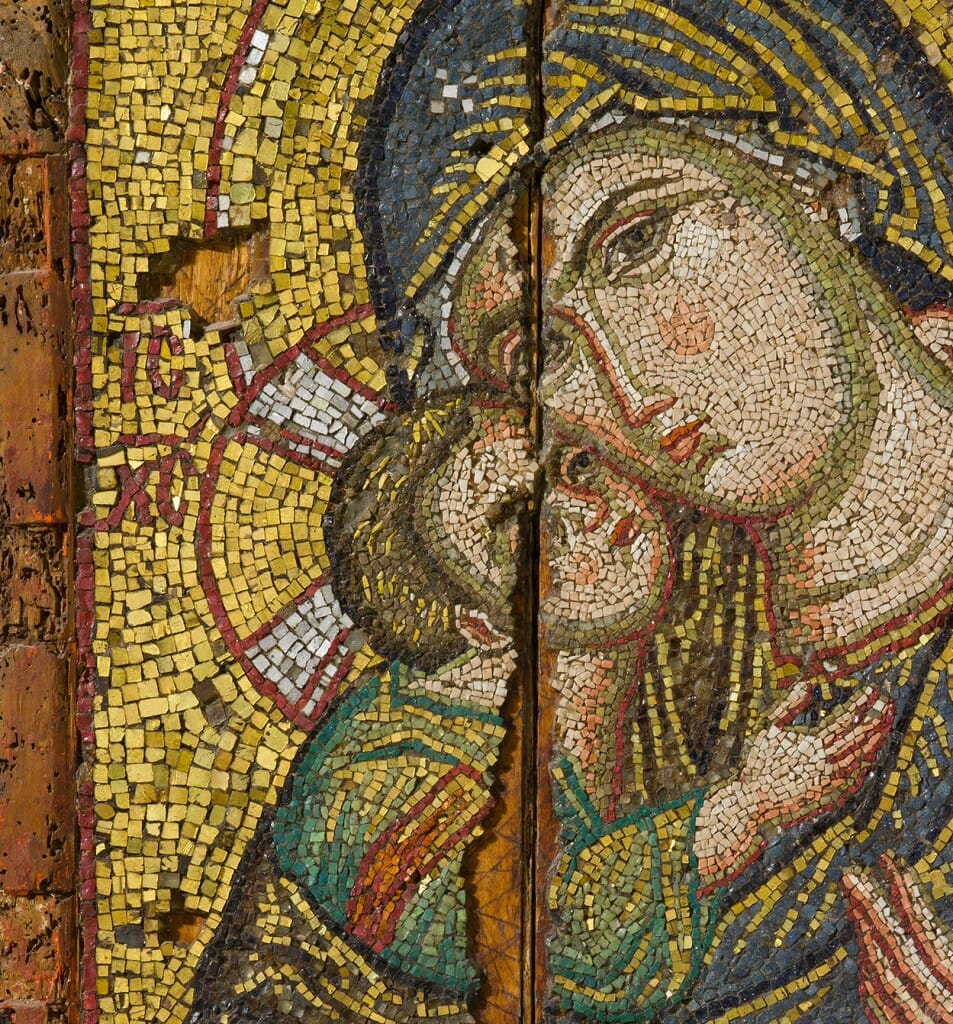 The two sided icon with the Man of Sorrows is the earliest known depiction of this theme, inspired by Isaiah 53:8.  Evidently liturgical offices relating to the Passion developed in Constantinopolitan monasteries during the 11th century and “the liturgical needs of the offices of the Passion led to the development of a new iconographic motif combining the themes of the Crucifixion, Lamentation and Entombment,” according to Angeliki Strati in the exhibition catalog. 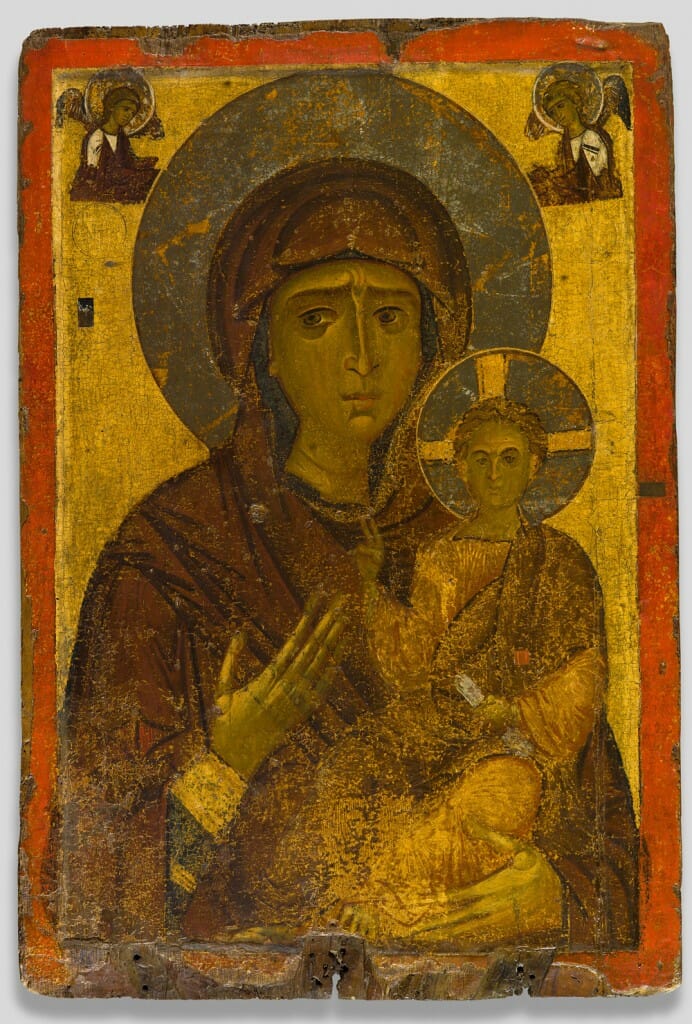 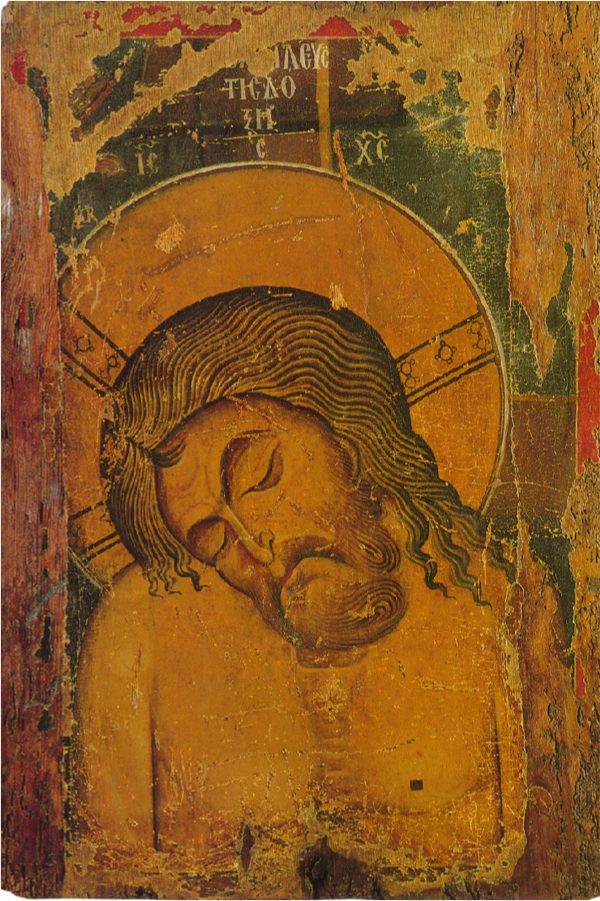 Finally, the large epitaphios was discovered in a small church in Thessaloniki in 1900.  This epitaphios is the most important extant example of Palaiologan embroidery.  The work is breathtaking and it is remarkable in its preservation.   In it are depicted the three highest ranks of the angelic hierarchy, cherubim, seraphim and thrones, distinguished by the number and type of wings, upholding the dead body of Christ.  Other angels surround the body and hold lances bearing the trisagion hymn, Holy, Holy, Holy. 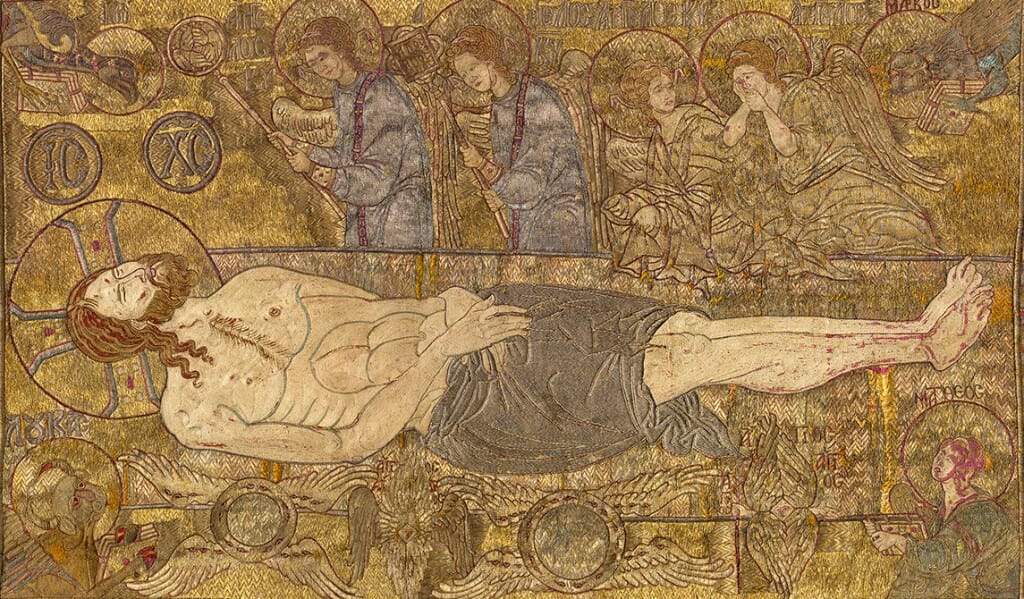 The catalog is so good that if you cannot make the show, you’ll feel like you were there, so it’s worth buying.  It is packaged in a two-volume set; one volume contains high quality pictures of all the objects in the show, plus many more.  There are excellent articles, including articles from such heavy hitters as Slobodan Curcic, Anthony Cutler and even Robert S. Nelson.  The second volume is more of a travel brochure, but for anyone interested in visiting Greece beyond the tourist level, this is a great reference for architecture and churches.

On a practical note, you should park by the 4th avenue entrance.  The exhibit is right up the stairs.  Before going, you might consider downloading “Parkmobile” app to your mobile phone.  It allows you to park on the street as most of the meters are broken, but, naturally, you are still liable for the fee and will be ticketed – with the app, you can pay remotely and won’t get a ticket.  Or, you could bring a roll of quarters.  There is only 2 hour parking either way, so you have to move your car.  On street parking is $4.50 for 2 hours.  The lots close by start at $12.00 for the first hour.  I spent about 3 hours at the exhibit.

Bring a little money for the gift store – there are some Greek published books, (in English), of the smaller towns and museums which supplied some of the shows items.  These are very well done with lots of high quality photos of the insides of churches and make great references for the liturgical artist.