Making Art with an Axe 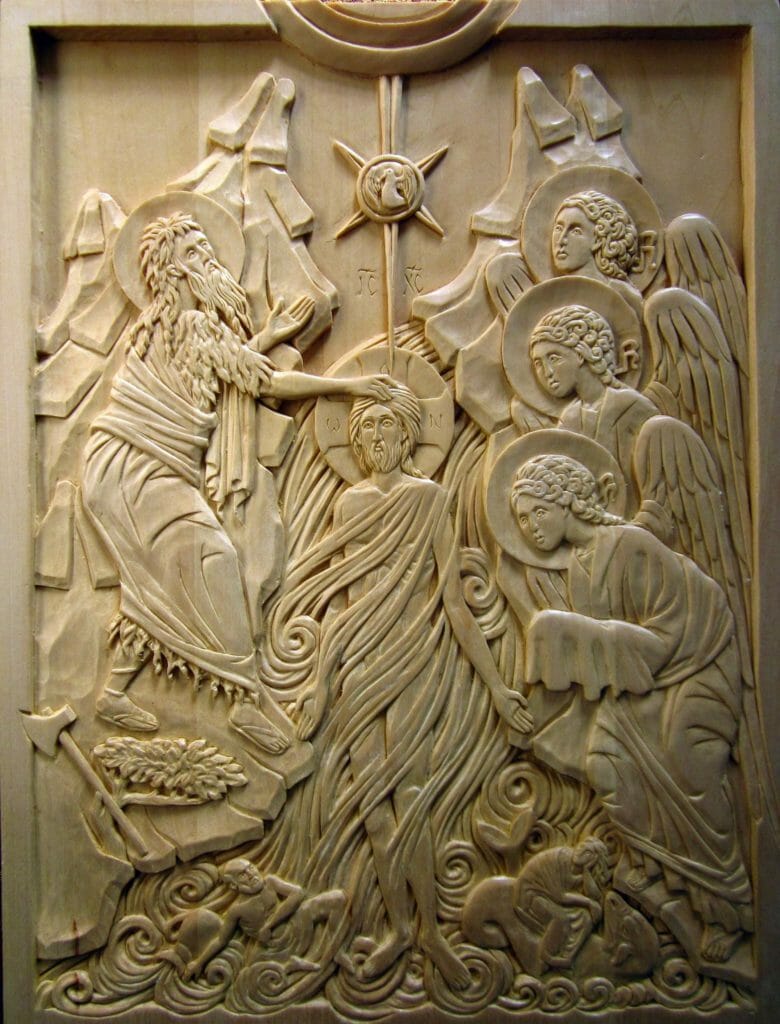 As we have just passed through the season of Theophany, I have been brought to ponder what Theophany means for art, especially liturgical art. The icon of Theophany offers much to reflect upon as we gaze at the elements it brings together. Just as in our lives and in the world, in the making of Christian art we must heed the entreaty of the voice calling in the wilderness:

“Repent, for the kingdom of God is at hand!

“Prepare the way of the Lord, make his paths straight.”

“Even now the axe is lying at the root of the trees; every tree therefore that does not bear good fruit is cut down and thrown into the fire.”

St-John gives us two powerful images side by side. He gives us an image of water, that is baptism and repentance. There, in the words of St-Gregory of Nyssa “Those who pass through the mystical water in baptism must put to death in the water the whole phalanx of evil… …  we must put to death in the water both the base movements of the mind and the acts which issue from them.[1]” 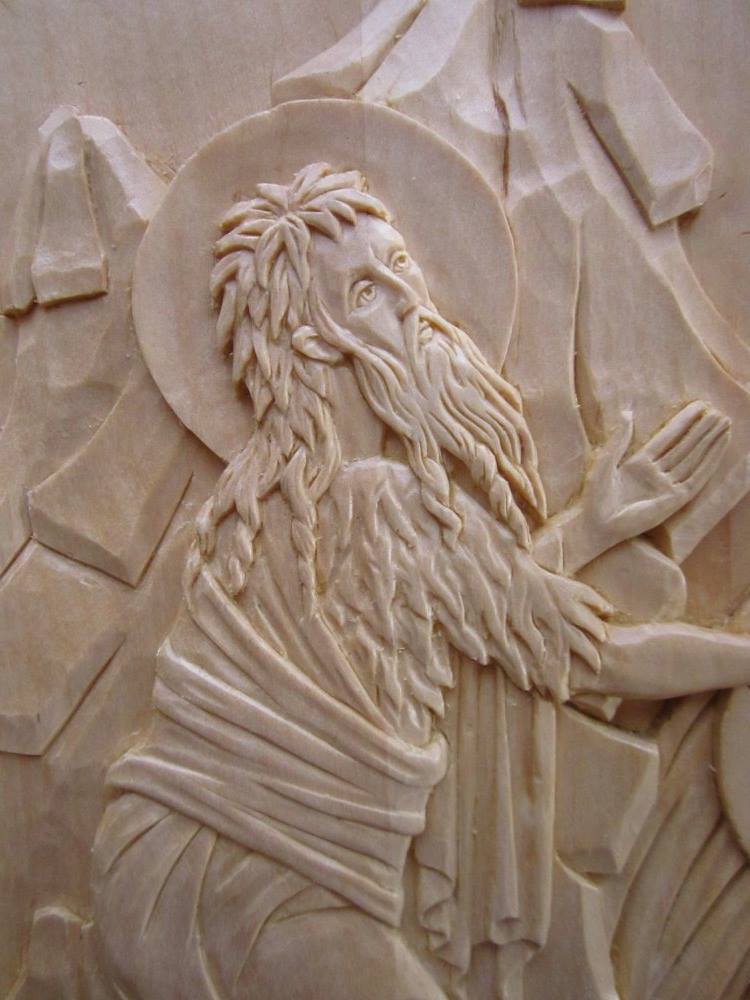 Detail of Theophany. Carved by the author.

Baptism as a removal of all that is foreign to our new life in Christ is echoed in the final judgement. If the first image is of water, the second image is that of fire, the axe, cutting away and casting off unfruitful branches.

The two images of water and fire come together in the imperative to “make his path straight”, preparing the way for the Lord to appear.   In the icon, the water of the Jordan is set next to the axe at the foot of the tree.  In our daily lives as Christians, we can understand both images as the call to the ascetic ideal of discipline and constant repentance. It is a self-imposed cleansing, and also a self-imposed fire, an axe which cuts away at the passions, the unwieldy thoughts and actions that lead us to wander in excess.

What can this mean in art?  I have been very taken by the proposition made by George Kordis of how the refinement and structuring of an iconographic composition is a form of ascetic struggle within art[2].  His insight has led me to recognize this tendency in terms of stylistic compositional choices as well as an approach to subject matter in the building of the traditional Christian grammar of art.  Language and grammar I believe are indeed the best analogies, for when facing our chaotic thoughts and emotions, the frame given to us by language helps us “make straight” our experience in its expression, so that as we fit the overwhelming chaos of the experiential field into language, we are able to communicate it with clarity and power in a language which binds a community together.

The basic grammar for Christian art is rooted in Classical art, especially that of Rome.  It is in the Roman world that the Church was born, and with Christianity entering the Roman Empire, it is the Roman body which was cleansed in the water of baptism, the Roman tree which was pruned of its dead branches.  That may seem like a frightening prospect at first glance, and maybe with reason.  Rome in the Scriptures is related to the Great Whore of Babylon as described in Revelations where the whore is found sitting on a seven headed beast which are seven hills the seven hills of Rome.  The Whore seems to represent everything perverse of Roman culture at the time of the Empire.  But do we doubt that a whore can be saved?

What if the development of the Universal art of the Curch was accomplished with axe, cutting off each branch that did not bear fruit and casting into the fire.  All immoral and inappropriate imagery of ancient Roman art, the rash eroticism, the excessive emotionalism, the showing of scandalous imagery was all burned off, left to drown, If you will, in the waters of baptism. What would come up would have “repented”, would be transformed, appearing straight and proper, “a path” on which the message of Christ could be communicated.  And this happened quite literally in ways that are so explicit that it is almost funny. 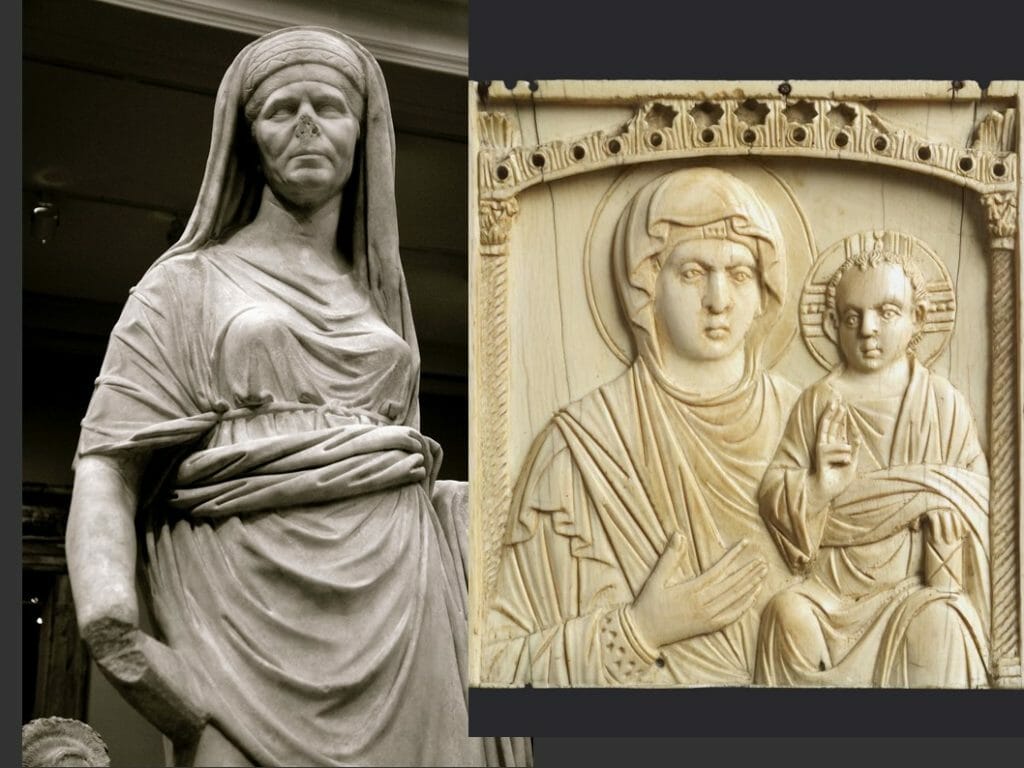 If one looks at a carving of a Roman woman in the first centuries before the conversion of Rome, and we compare it to the figure of a woman in the 10th century, we will see that there is literally a visual “straightening”. The body is covered, the curved lines of the figure are reigned in, made straighter in order to focus the viewer, prevent the viewer from being distracted by an appeal to sensuality.  This is not to say that the body is evil or that sexuality and desire are evil, but in the art of the Church, in the attitude of prayer, the body is focused and gathered into itself to avoid being dissipated.  It is also not only sexuality which is at stake here.  There are also other types of passions, such as the excitement which can be brought about by physicality in general, sports or fights, excitements of passions which are not erotic in nature, but can lead to our dissipation of mind nonetheless. Such passions can be brought about simply by witnessing an excited expression or the tension in a muscle. 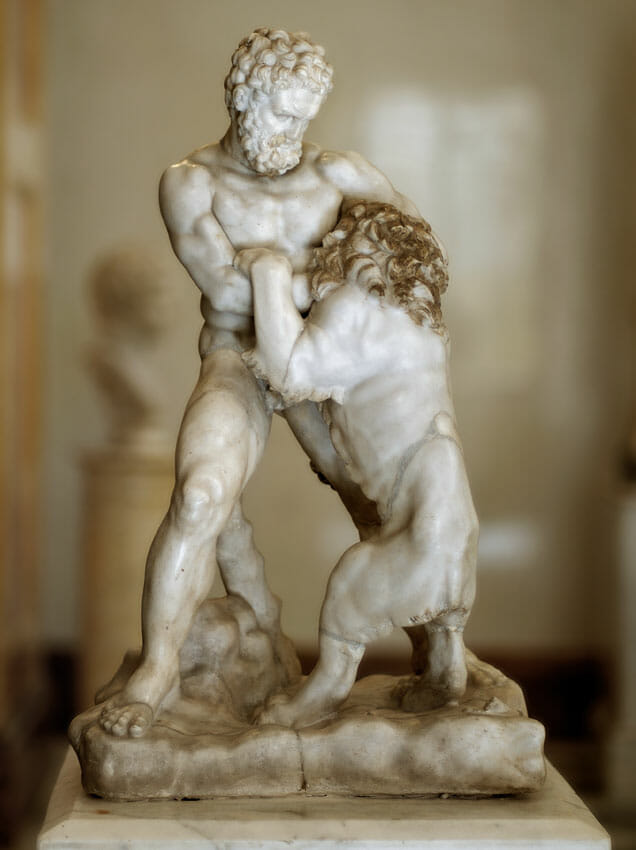 Of course we know that Roman art, like our cultural forms today were replete with violence and eroticism, naked bodies and war everywhere, full of gods and goddesses, nymphs and countless monsters.  It is those things which were cut off to make art straight and become a proper vehicle for Divine Grace.  As the centuries passed, the number of places where actual ancient roman gods and nudity continued to be represented in traditional Christian art shrank steadily to become nearly non-existent[3].  Paradoxically though, one of the places where both nudity and ancient gods continued to be present in traditional iconography is in the icon of Theophany, the very icon which exemplifies the process of baptism and reminds us that “the axe is lying at the root of the trees.”

There is no unanimous tradition, but even until today, many iconographers represent Christ nude in the waters of the Jordan. And down in the water, shown fleeing, are two allegorical figures representing the Jordan and the Sea, and these allegorical figures are represented using the Roman typology of ancient river gods.  It is all based on a Psalm which is here interpreted as a prophecy for the Messiah:  “the sea saw and fled, the Jordan turned back” (Psalm 114:3).  And so amazingly enough, through a very powerful use of visual language, one can see that it is not only the Jordan and the sea that are fleeing, but also the old gods, in fact all the dead trees of Rome which do not bear fruit, those are being left in the waters of death as Christ’s body comes out glorified.  The axe on the shore reminds us of this cutting off which leaves the darker aspects of the old roman body into the margins of the Christian life . 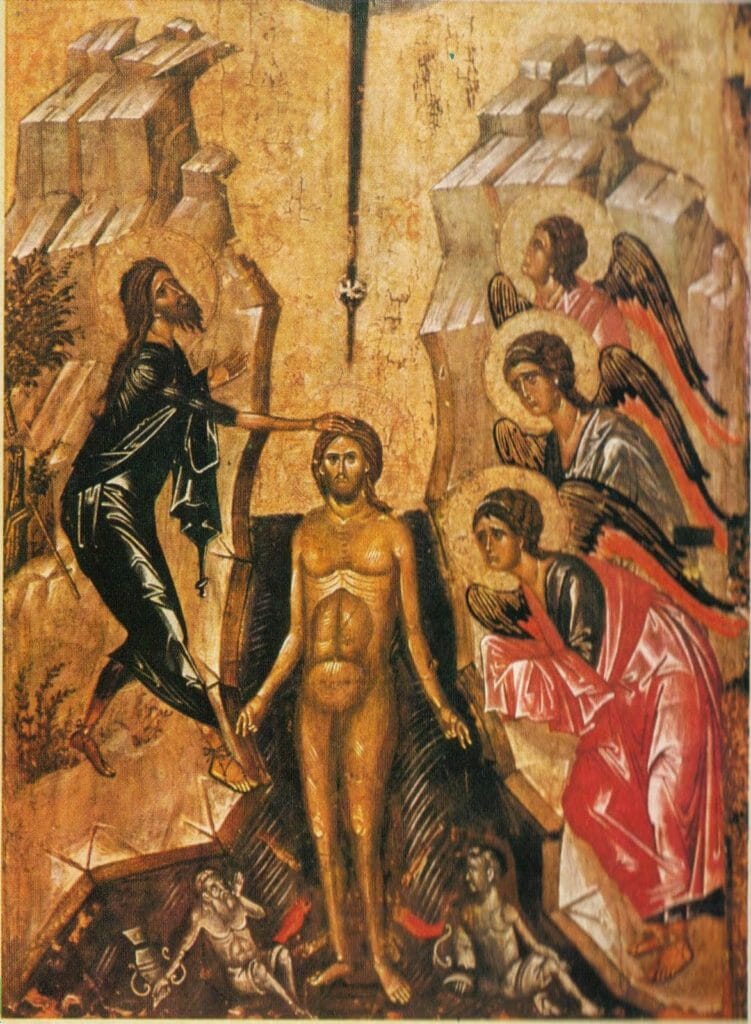 Theophany. Notice the figure in the water. 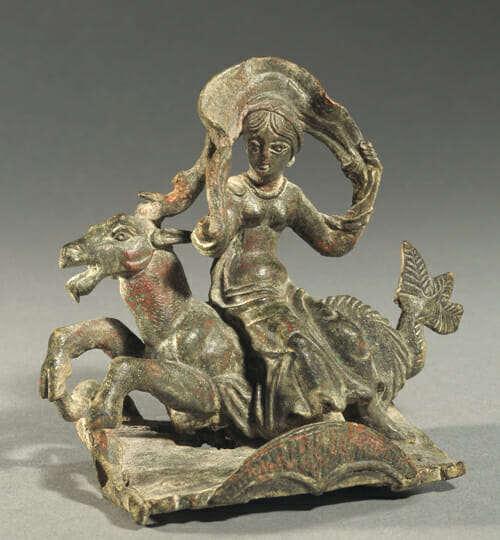 Example of a Roman river nymph 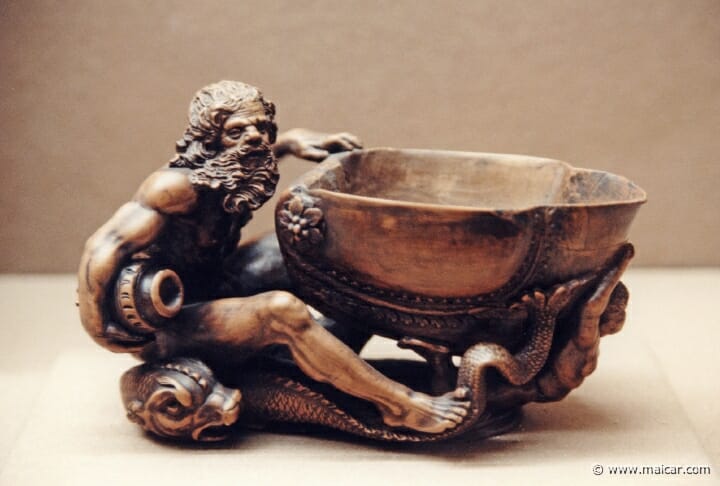 The body which Christ exemplifies in the icon is an ascetic body, one which has been visually simplified and though nude does not personify the passions usually attributed with the representation of the nude body. This ascetic body is ready to be covered by the angels in a garment of glory.

The process called for by St-John the Forerunner, the work needed to “Prepare the way of the Lord, make his paths straight” is one which we can discern all through the history of the icon. And it seems that, although it is certainly not the only process at work in the development of our art, this desire to straighten the Roman body may have guided many aspects of the basic aesthetics and styles of iconography. We can also see this process as ongoing today in the renewal of liturgical arts as iconographers continue to explore other visual styles and approaches. With one eye on the world around them and one eye on the grammar and frame of Christian art, the contemporary iconographers work at bringing all of it together so to create a living, breathing art of the Church.

[3] Of course those elements would return with a vengeance during the Renaissance in the West, but that is another story for another time.