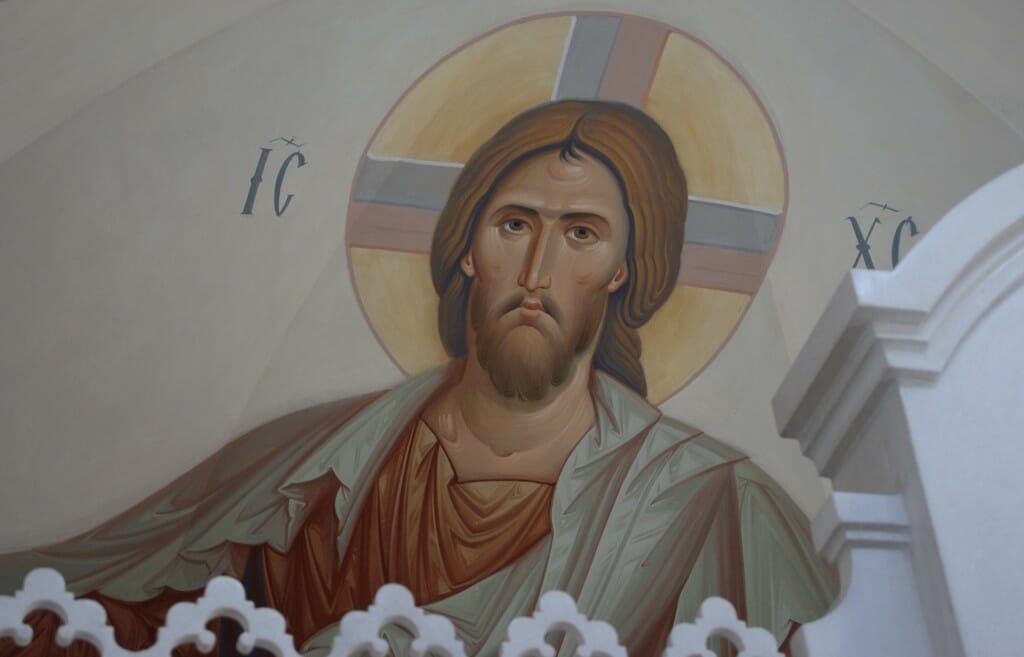 Anton and Ekaterina Daineko are a married couple from Minsk, Belarus. Their work in panel icons and frescos stands out for its fluidity in drawing as well as its subtle use of color and highlight. As they are giving some master classes in Vermont this year, I thought it would be a good opportunity to feature their iconography on OAJ. 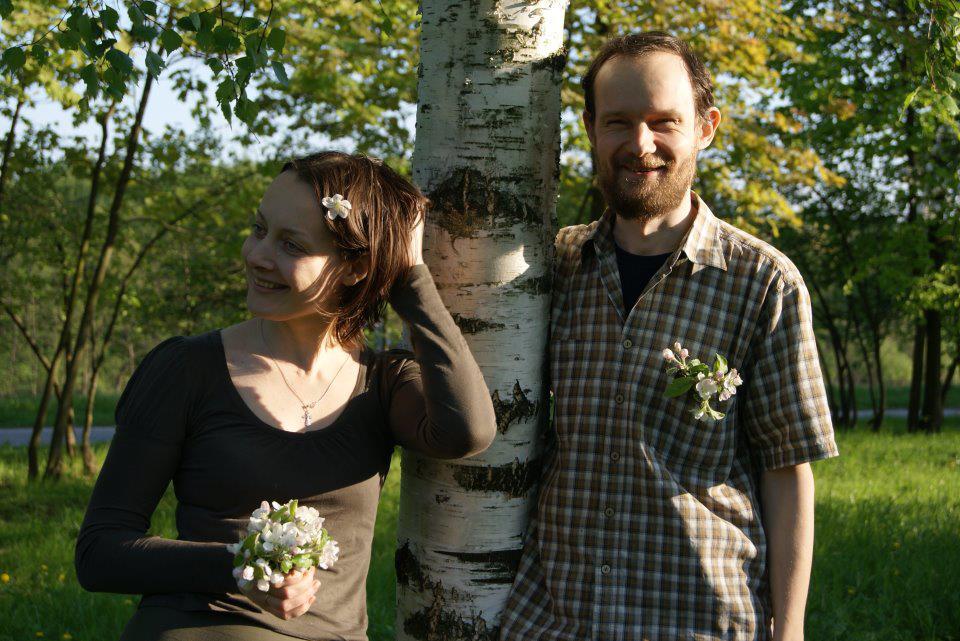 Ekaterina told me a bit about her own journey in the 1990s. Searching for meaning amongst so much philosophical emptiness at the age of 16, her questions eventually led her to Christ and his Church. Covered by the love of God, and following her long developed passion for art, she felt that icons were the best way to give meaning to the world. Anton was going through a similar transformation, though they still did not know each other.  But as she puts it, the Soviet Union had left “a huge empty desert” where it was difficult to find books or material on iconography though icons could still be found in Museums. 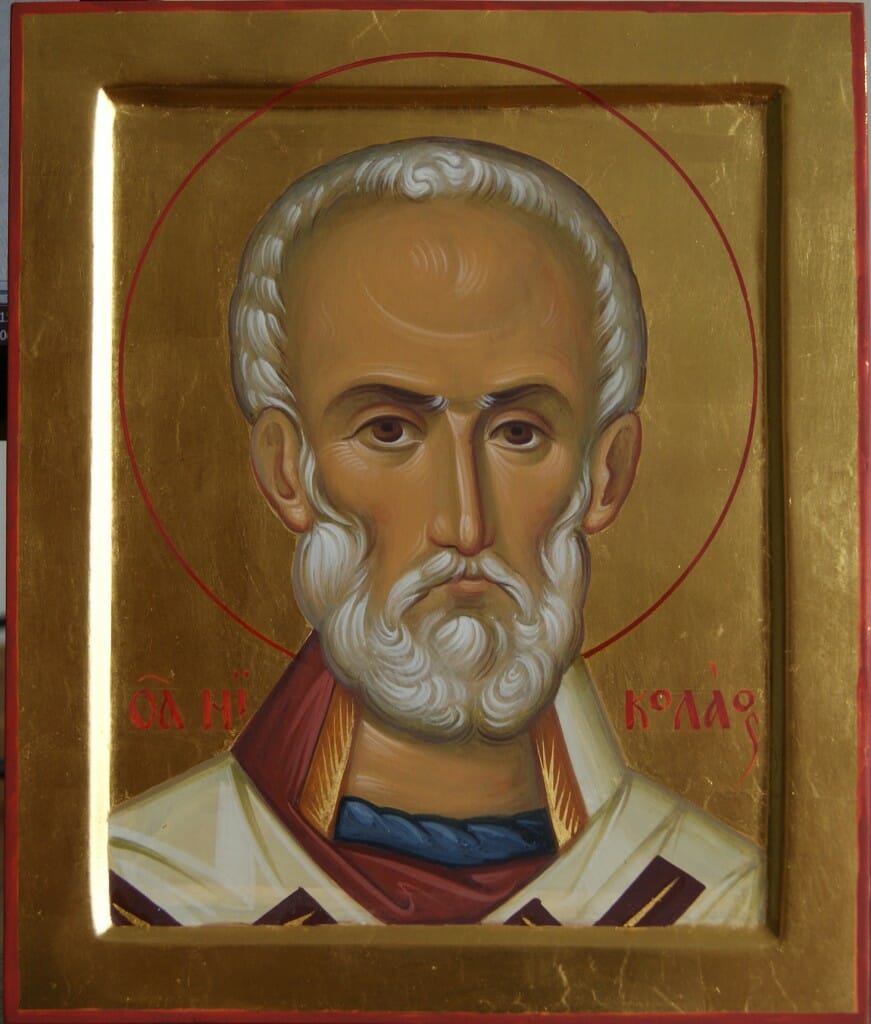 Ekaterina met Anton by chance on an organized trip to Moscow while they both studied at the State Academy of Art, where Anton was already seen as a virtuoso and one of the best drawing students, working with a stipend from the president. They discovered common interests, which included iconography, and their relationship grew, eventually leading to marriage and a close working partnership.

After finishing their studies, they worked for ten years in the icon studio at the newly built St-Elisabeth in Minsk convent. Neither of them had training in iconography, though they could rely on the classical artistic training they had received at the State Academy for drawing skill, composition and understanding of color. So it is through trial and error, prayer and by asking each others opinions that they developed their own particular style of iconography. After ten years, they went out on their own and have been involved is several fresco projects as well as painting panel icons and teaching. 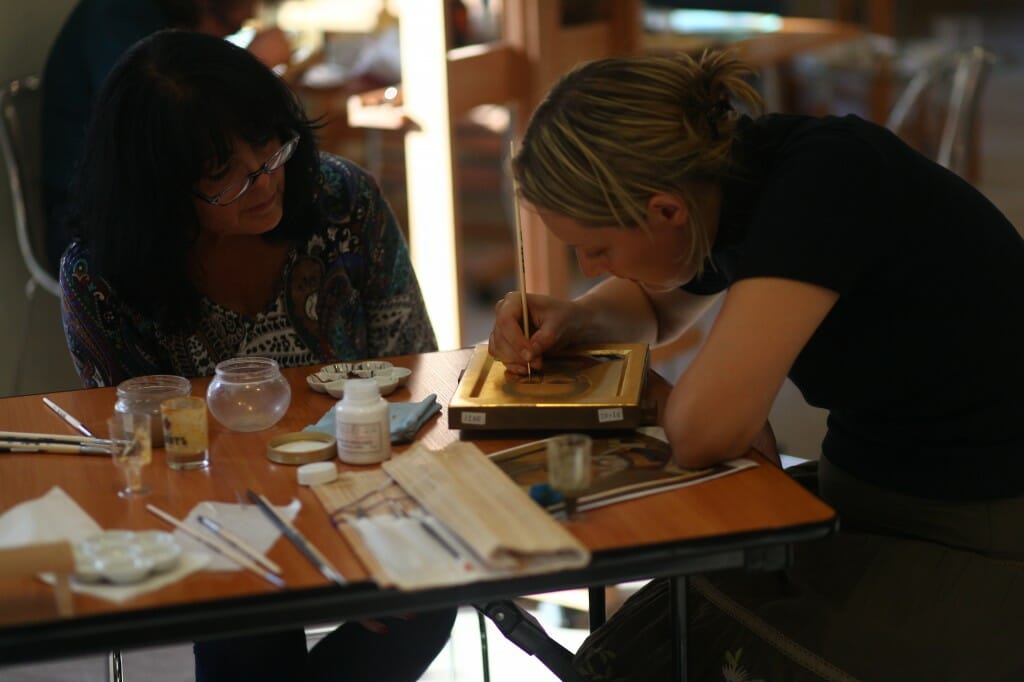 Ekaterina teaching during a Master Class.

Their iconography takes on all of its breadth in the fresco work, where it seems that Anton’s virtuoso and fluid drawing skills are maximized in expansive compositions. The refinement in pose, vestment and especially expressions betrays immediately their classical training and manifest clear affinities with good illustration. All the while, their imagery remains firmly grounded in iconographic principles and canon. 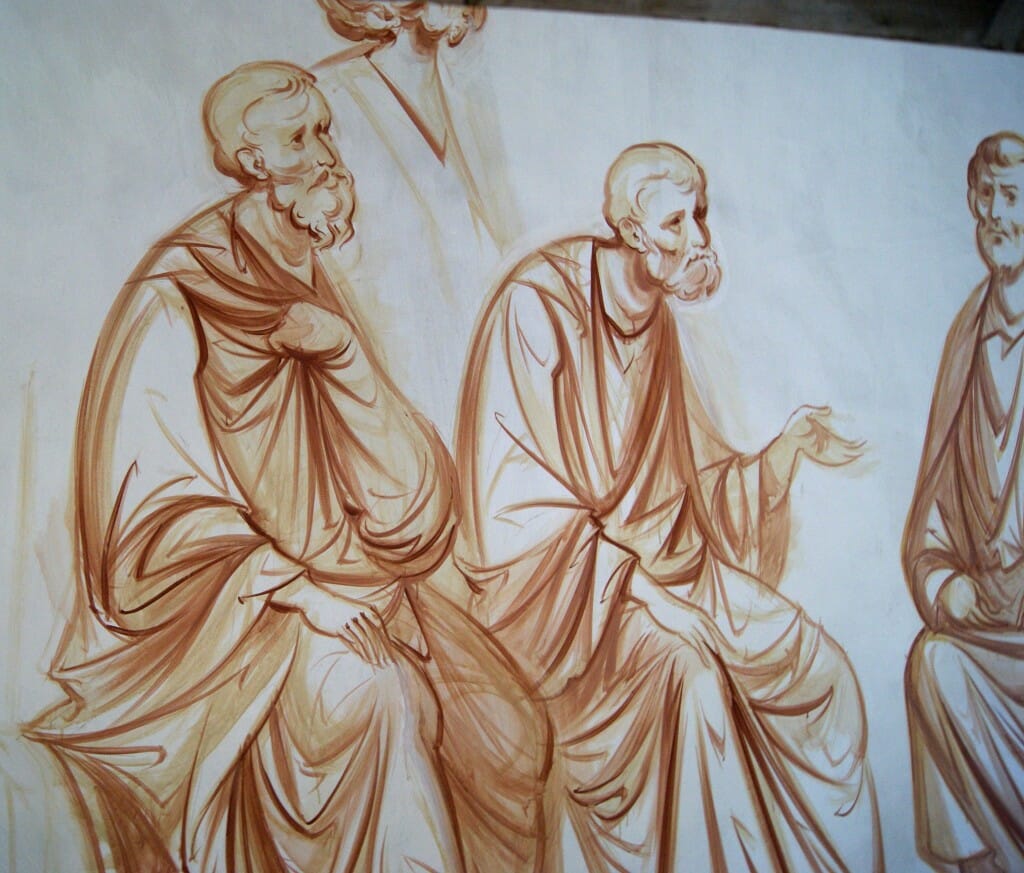 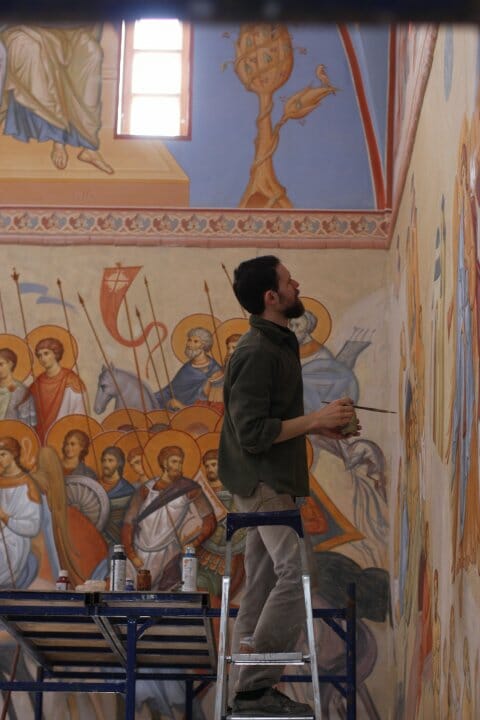 Anton, working on a fresco

One of the aspects which is the most striking, especially in the frescoes, is the looseness of the brushwork and the use of different levels of highlight to emphasize certain parts while almost flattening others without any highlight at all. Some parts are left very bare of detail, while other parts are rendered in rich, almost mannerist detail. This creates very dynamic surfaces which work especially well on large frescoed areas. 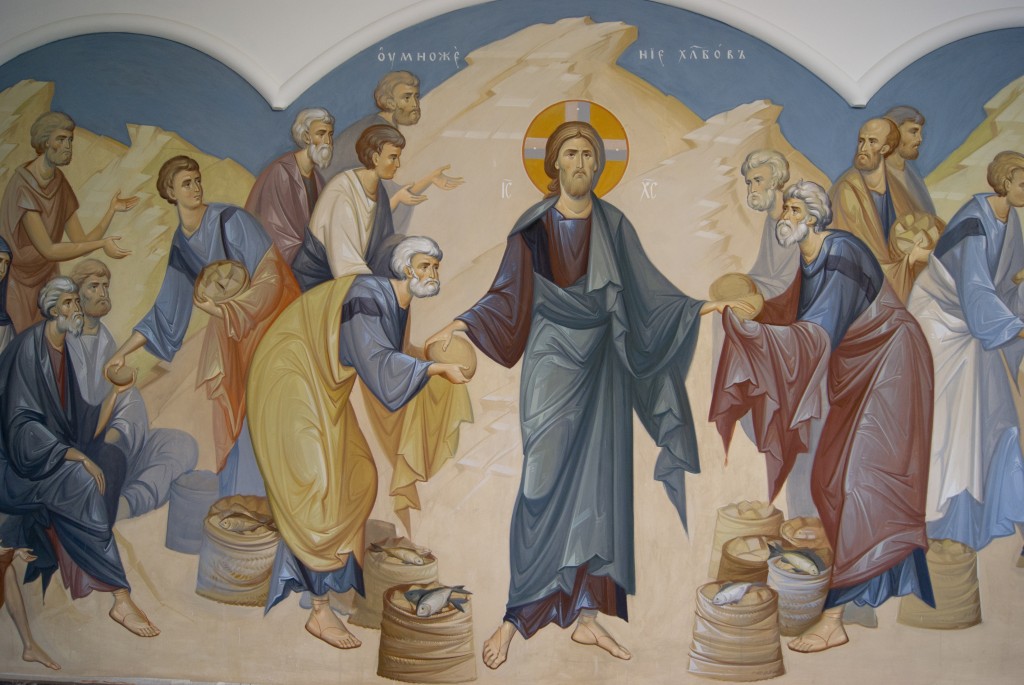 Notice the mixture of simple and complex rendering in the figures’ vestments. 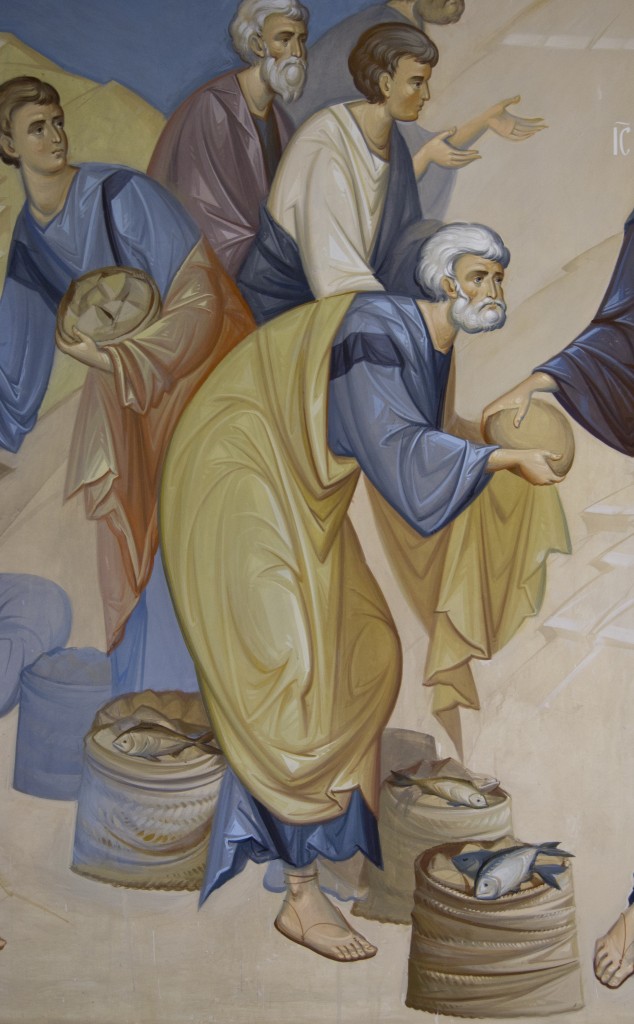 For those interested in working with them, it seems like there are a few spots left for their August workshop, though I imagine they will fill up rapidly. 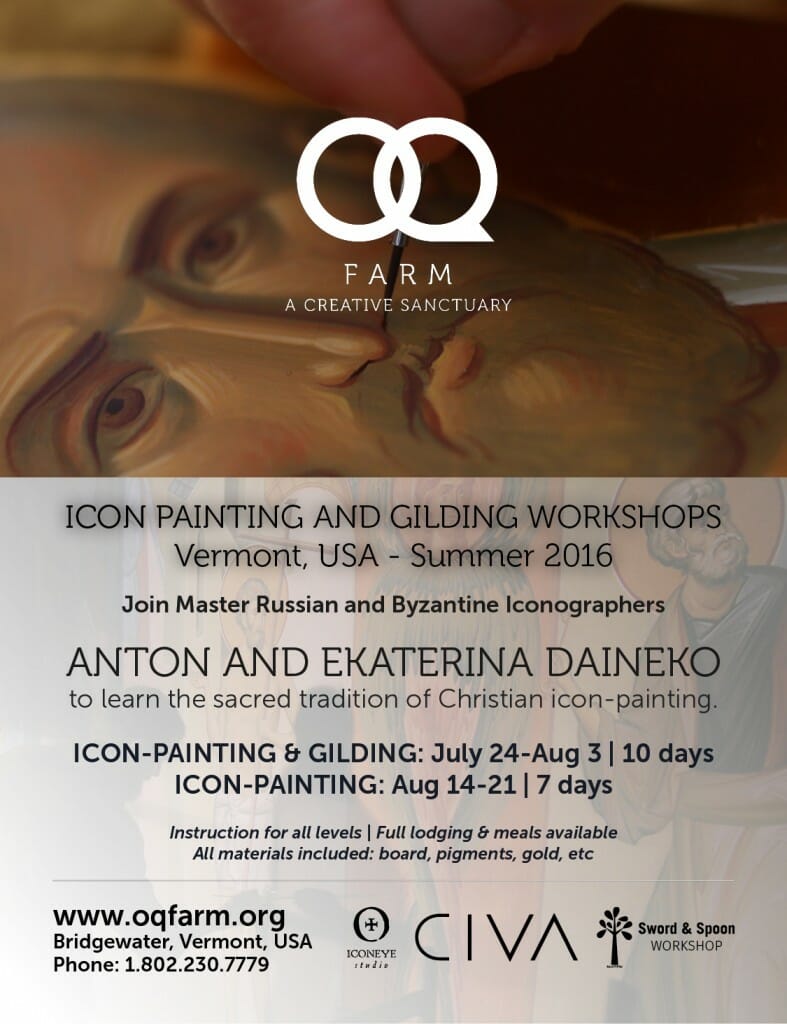 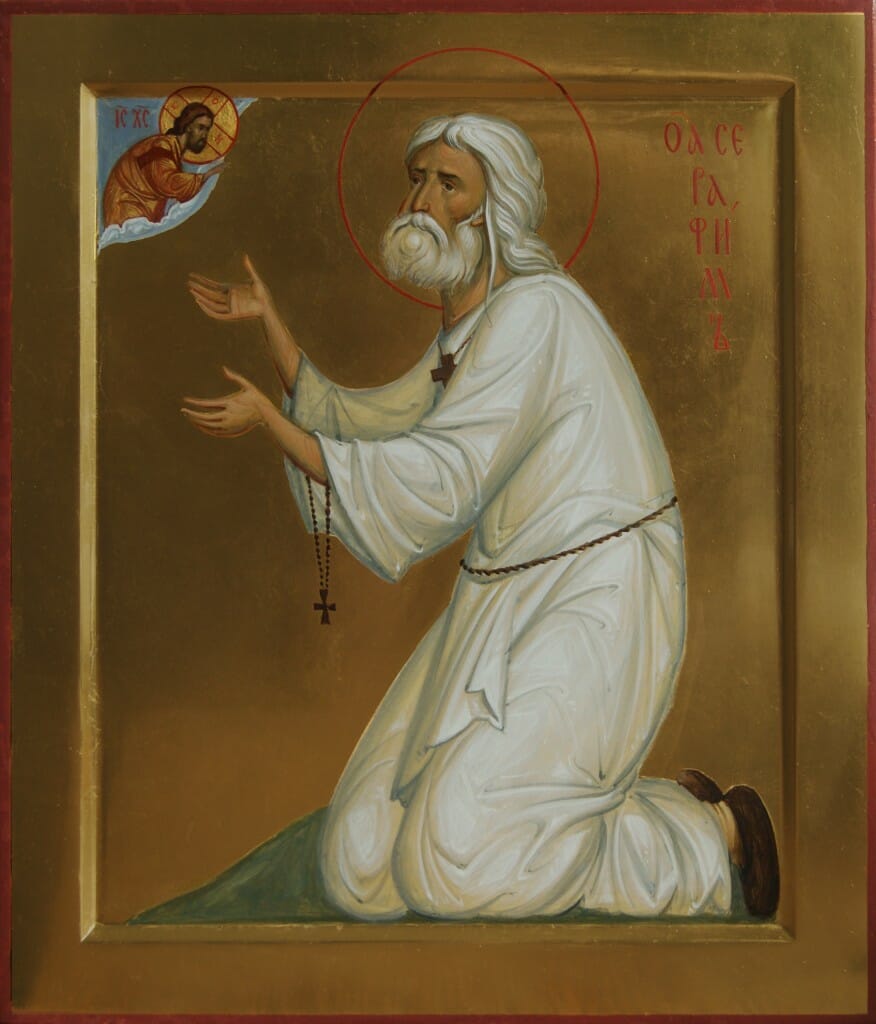 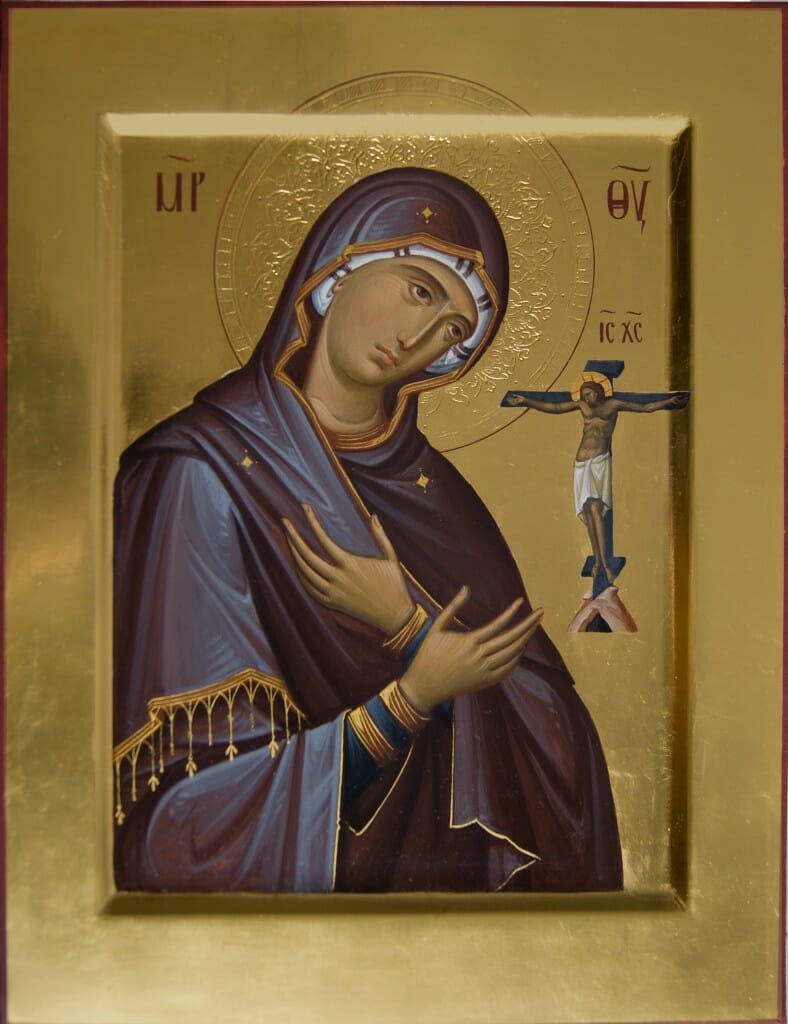 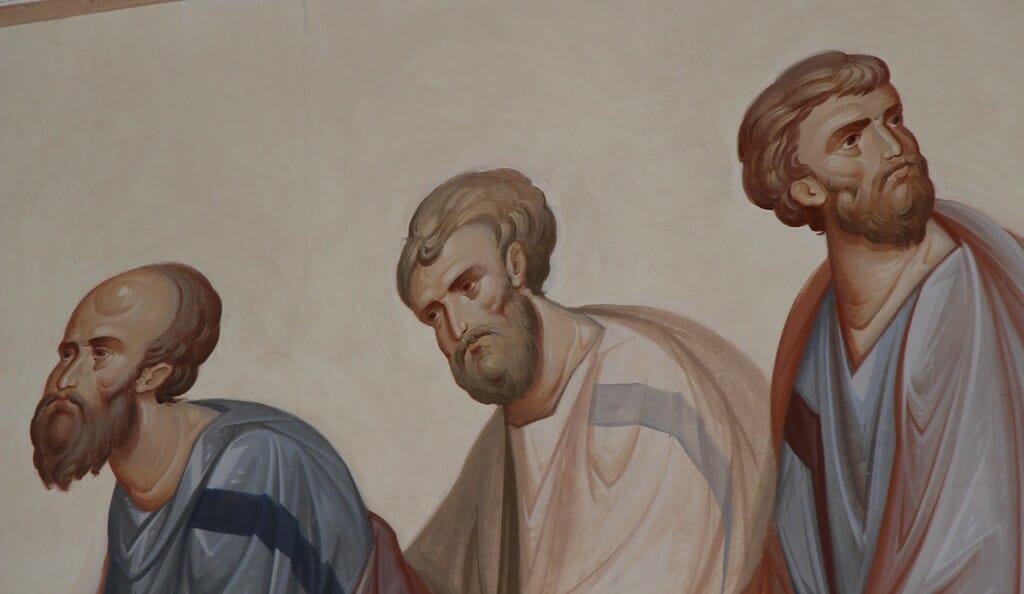 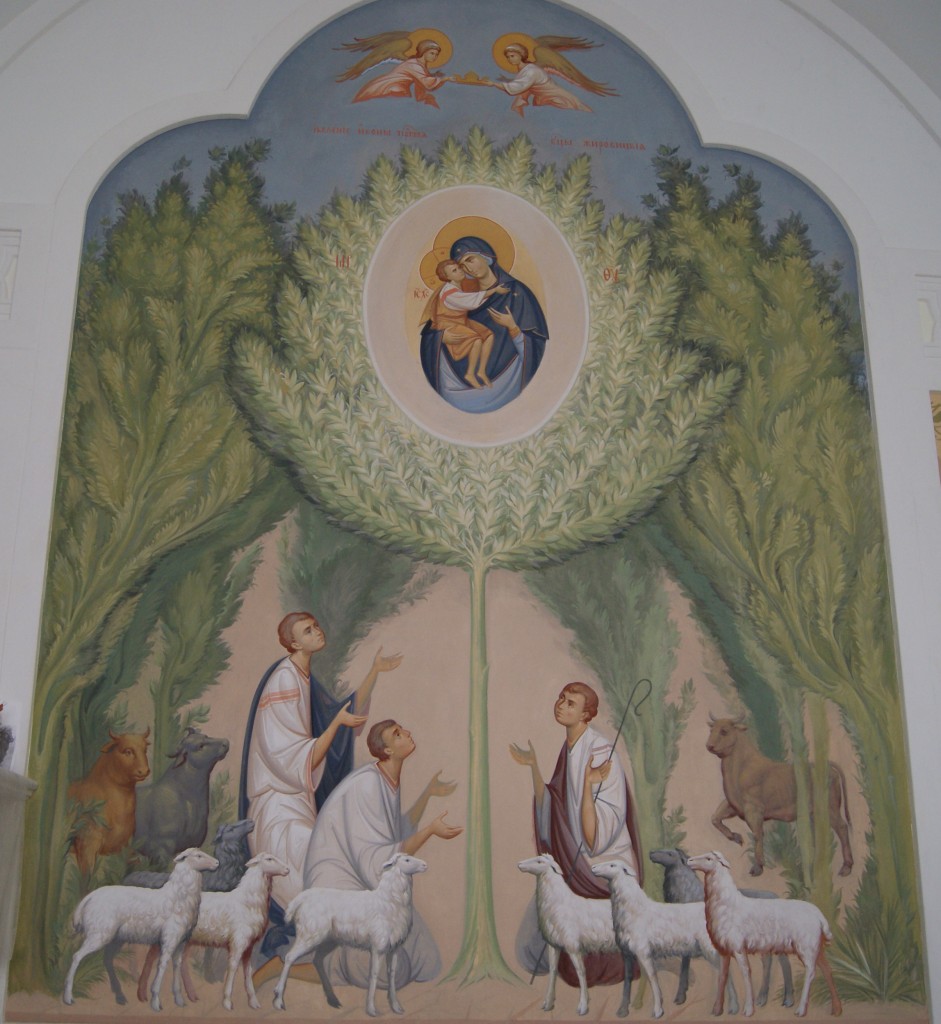 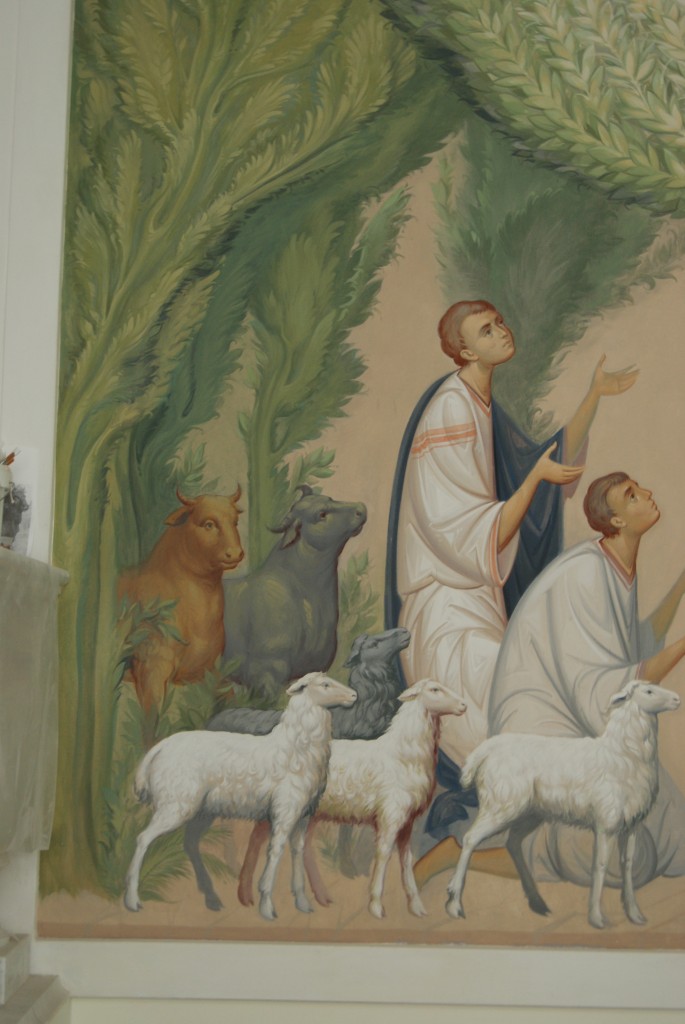 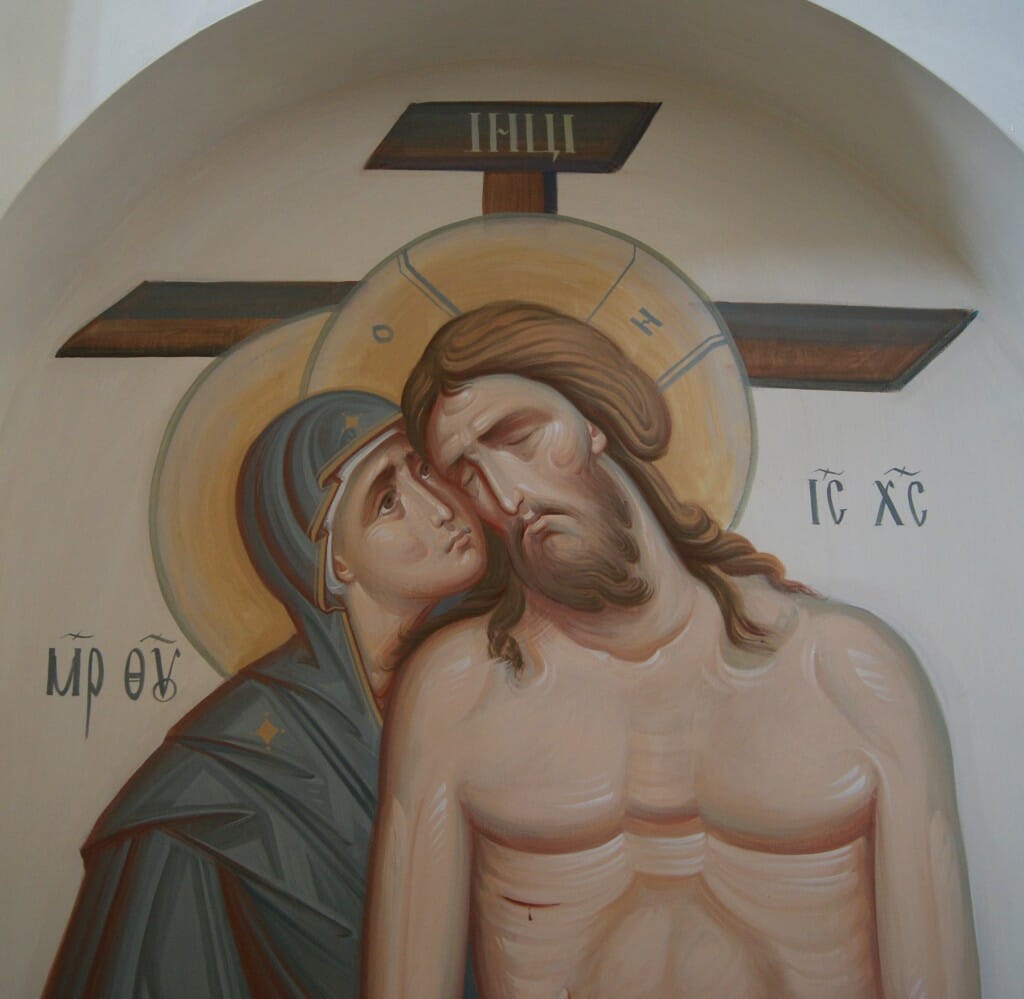 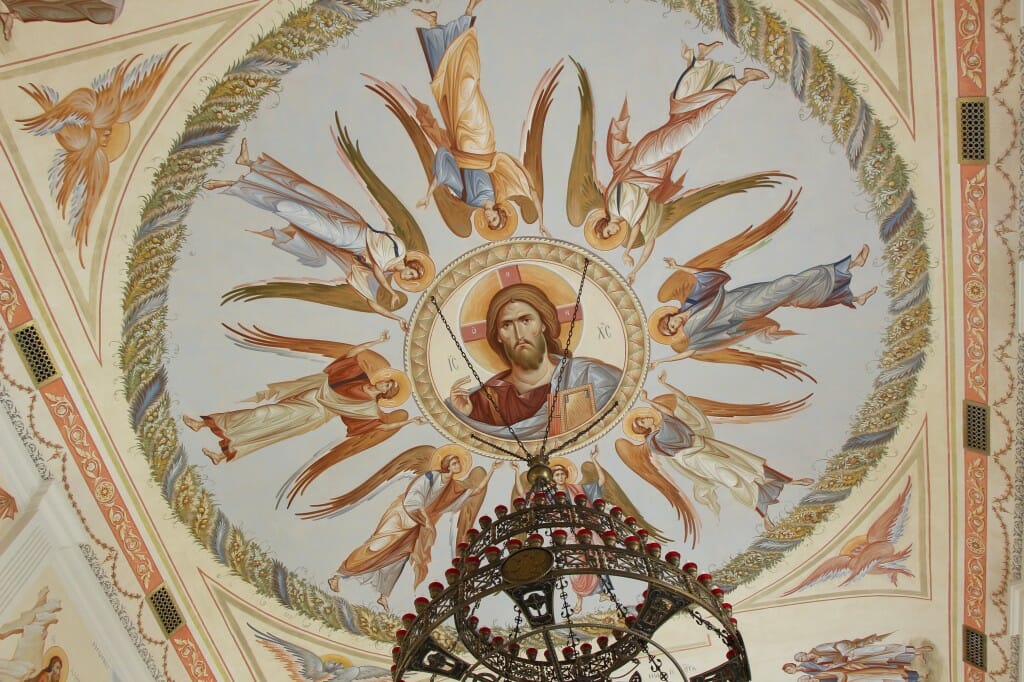 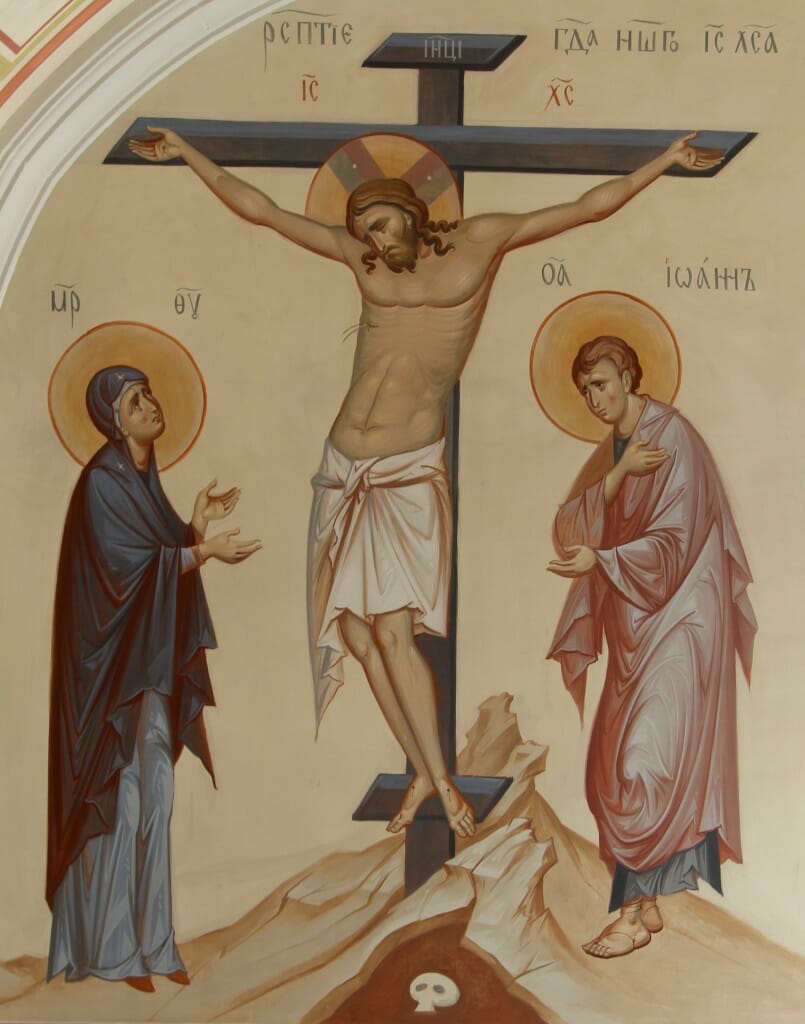