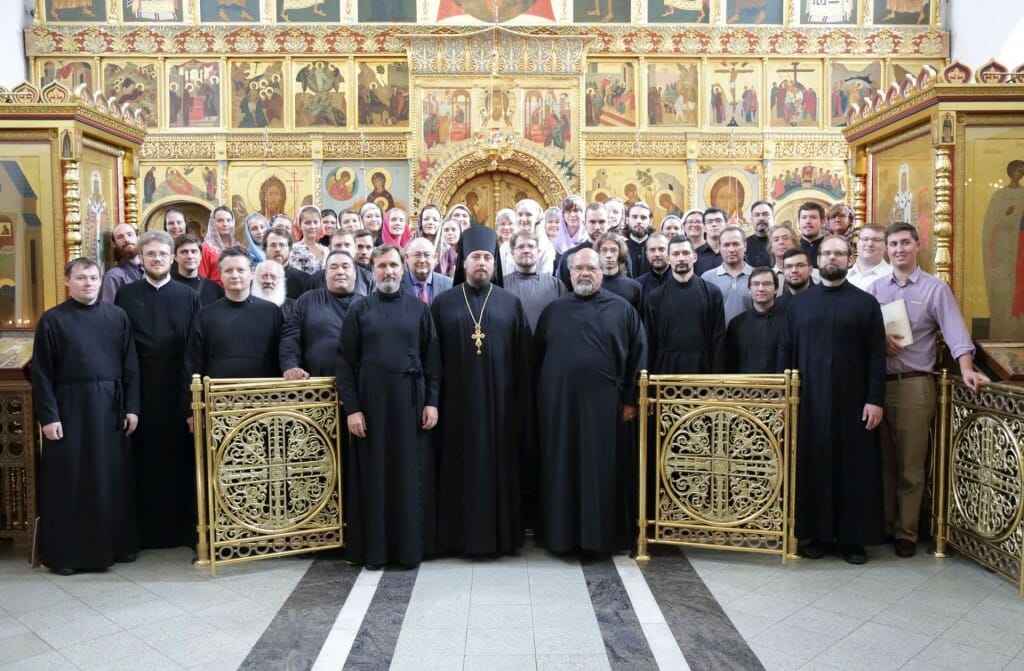 On the morning of September 2, 2015, 34 international guests gathered at the Moscow Podvorye of the Holy Trinity-St. Sergius Lavra for a five day workshop and master class sponsored by the Patriarch Tikhon Russian American Music (PaTRAM) Institute. As guests of the Podvorye, they worked with PaTRAM Artistic Director, Vladimir Gorbik, and joined members of his renowned Male Choir. The workshop consisted of four days of rehearsals at the Podvorye, where Maestro Gorbik instructed the participants in the ethos, interpretation, and technical qualities of Russian sacred choral works. The participants enjoyed the unprecedented privilege of joining the Podvorye choir for the singing of the All Night Vigil and the Divine Liturgy held on September 5th and 6th. 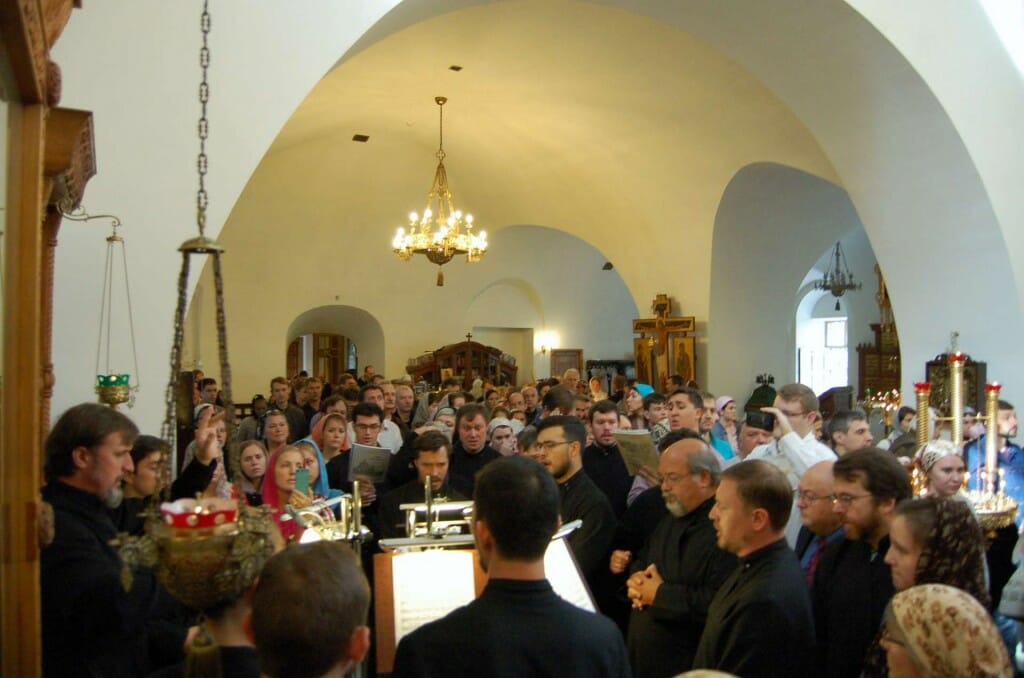 As one of the participants, I found the experience broadening and fascinating in several ways. It was a great joy to sing with such an excellent group of musicians, and it was a surprise to see how readily this international group of voices blended. The guest singers were from the USA, Canada, and Australia. Most did not speak Russian, and some had little to no experience singing in Slavonic. Thanks to excellent transliterated scores from Musica Russica and crystal-clear directing on the part of Maestro Gorbik, it took little time for this group to blend perfectly with the professional singers who joined us from the Podvorye Male Choir and the Moscow Conservatory. 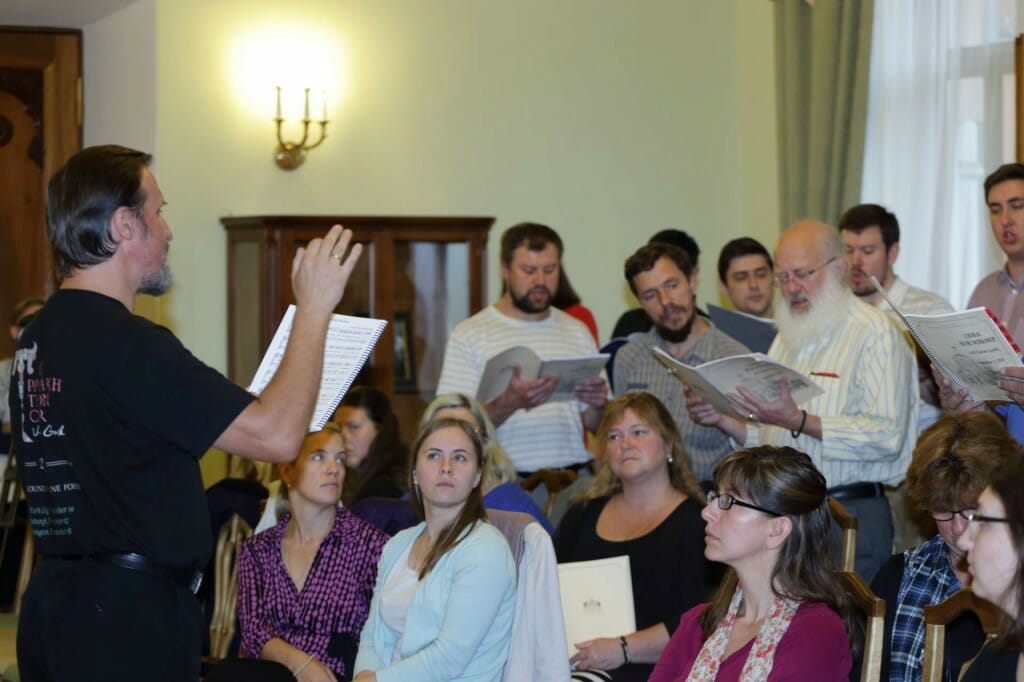 The repertoire consisted of hymns by notable Russian composers such as Rachmaninoff, Chesnokov, Kastalsky, and Gretchaninoff. The group sang arrangements for small ensemble, mixed, and male choir. This unique program gave participants a first-hand experience of Russian sacred choral music and the “Lavra Style” from the very heart of this great tradition. It was fascinating to see how Gorbik interpreted the music, sometimes rather freely, to add a layer of profound and unexpected diversity to the fabric of sound. In particular, he wielded the basso profondo like an additional unwritten musical part, instructing them to sing in the low octave at certain special places, adding a whole new character to the musical line. One of these basses could sing so low and so loud that Gorbik told the Americans to listen carefully and remember it, because he was sure we had never heard such sounds before in our lives! 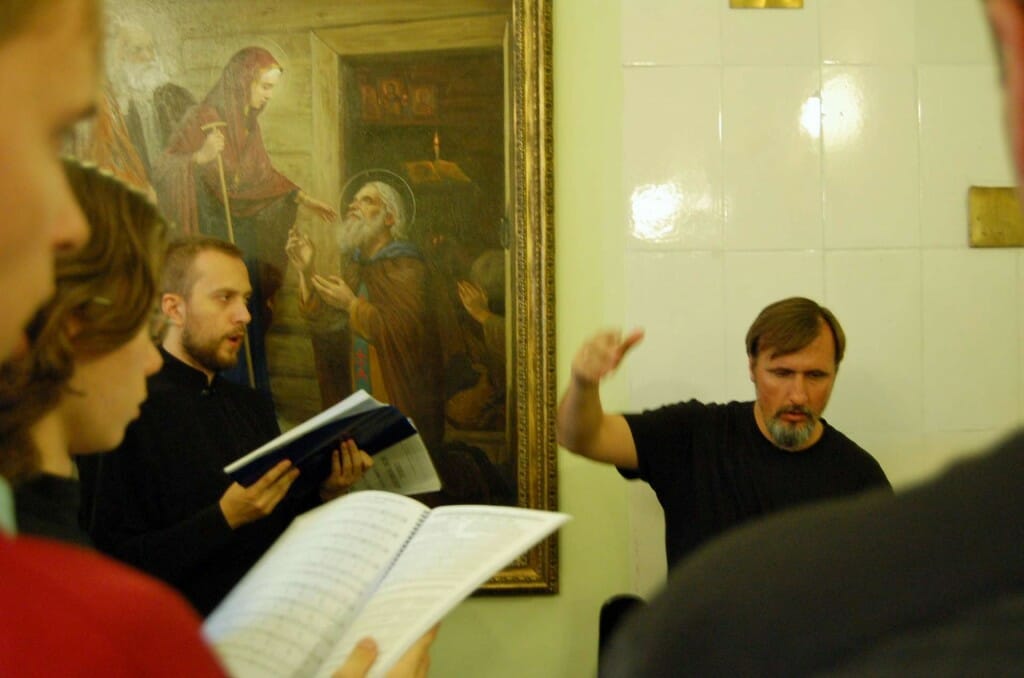 Perhaps the most surprising aspect of the workshop was the extensive media coverage. There were no fewer than five television and newspaper crews filming at the rehearsals and services. These included several Russian stations as well as the Moscow correspondents from Voice of America and the New York Times. Americans coming to Moscow to sing Russian church music was immensely surprising and even downright unbelievable to many Russians. The media considered it an important story to cover, and many of the Russians who met us seemed to take great pride in learning that their church was of such interest to Americans. They said that our enthusiasm was an inspiration to their own faith – a sentiment that was equally surprising to us, since the Russian church seemed by all appearances to be in such profoundly good order and in no way lacking in enthusiasm!

The workshop concluded with our participation in the Saturday and Sunday services, which were immensely beautiful. In addition we were offered VIP tours of Christ the Savior Cathedral, the Kremlin and the Holy Trinity-St. Sergius Lavra, gaining access to areas not normally open to tourists. We very much look forward to seeing more such events in the future! 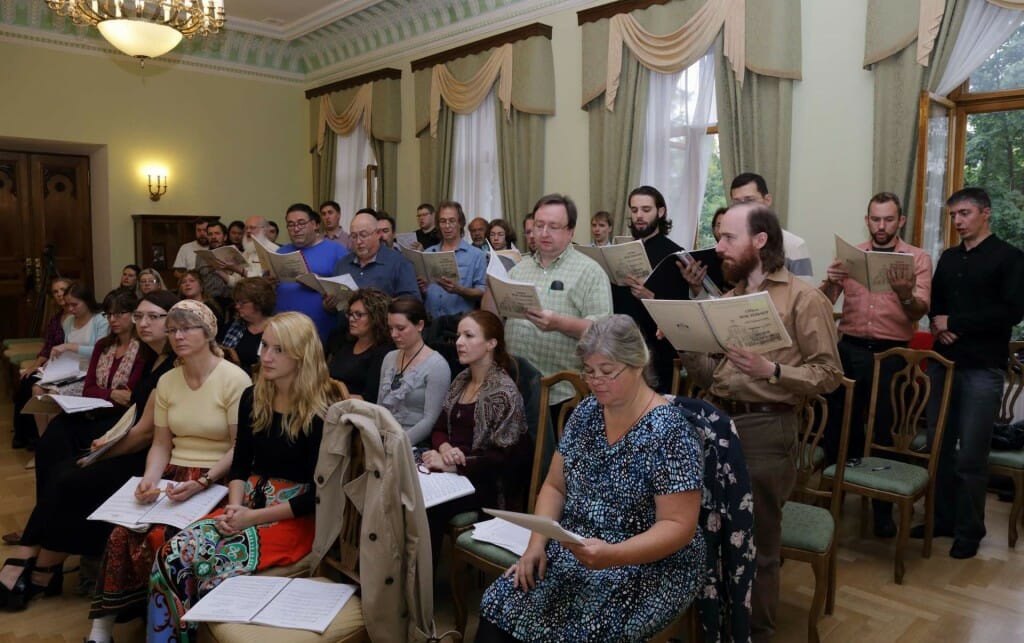 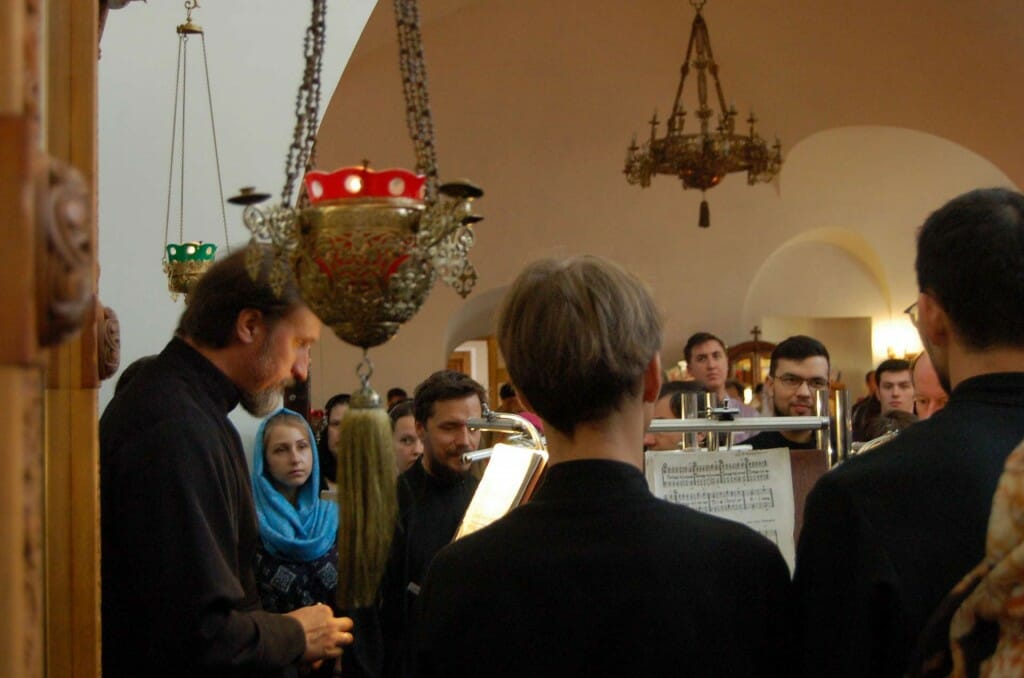 Maestro Gorbik preparing the choir before the start of Vigil 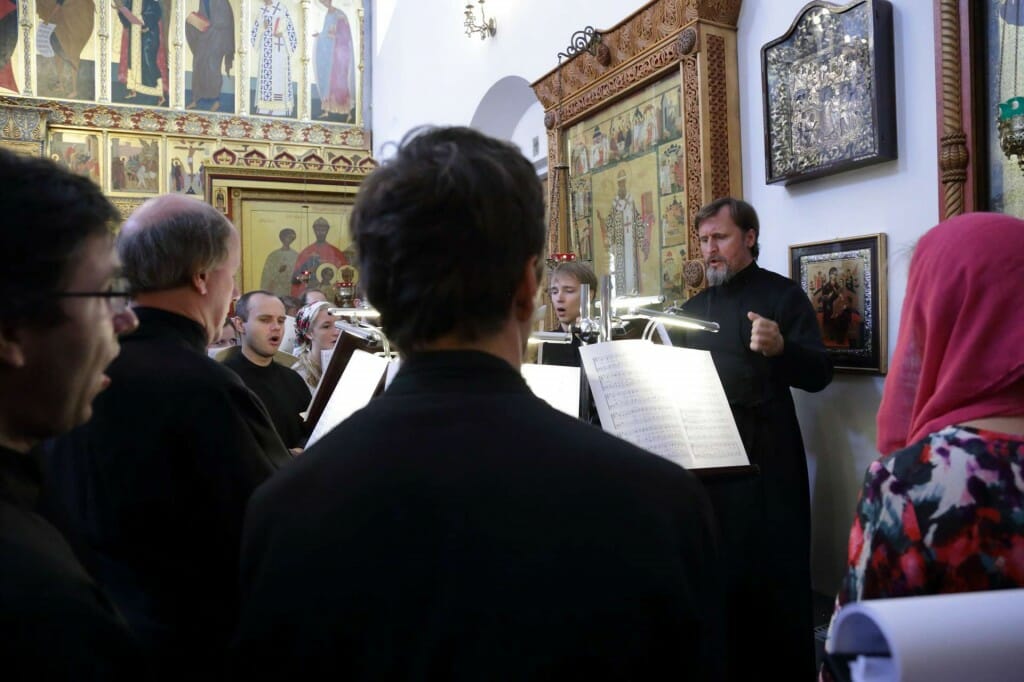 During the Divine Liturgy 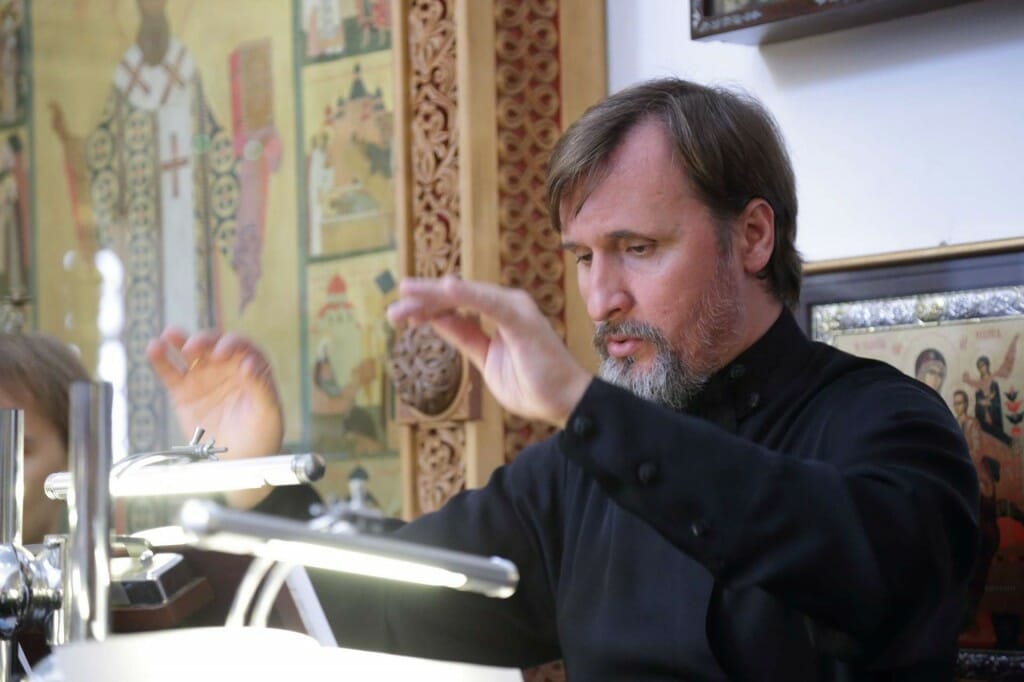 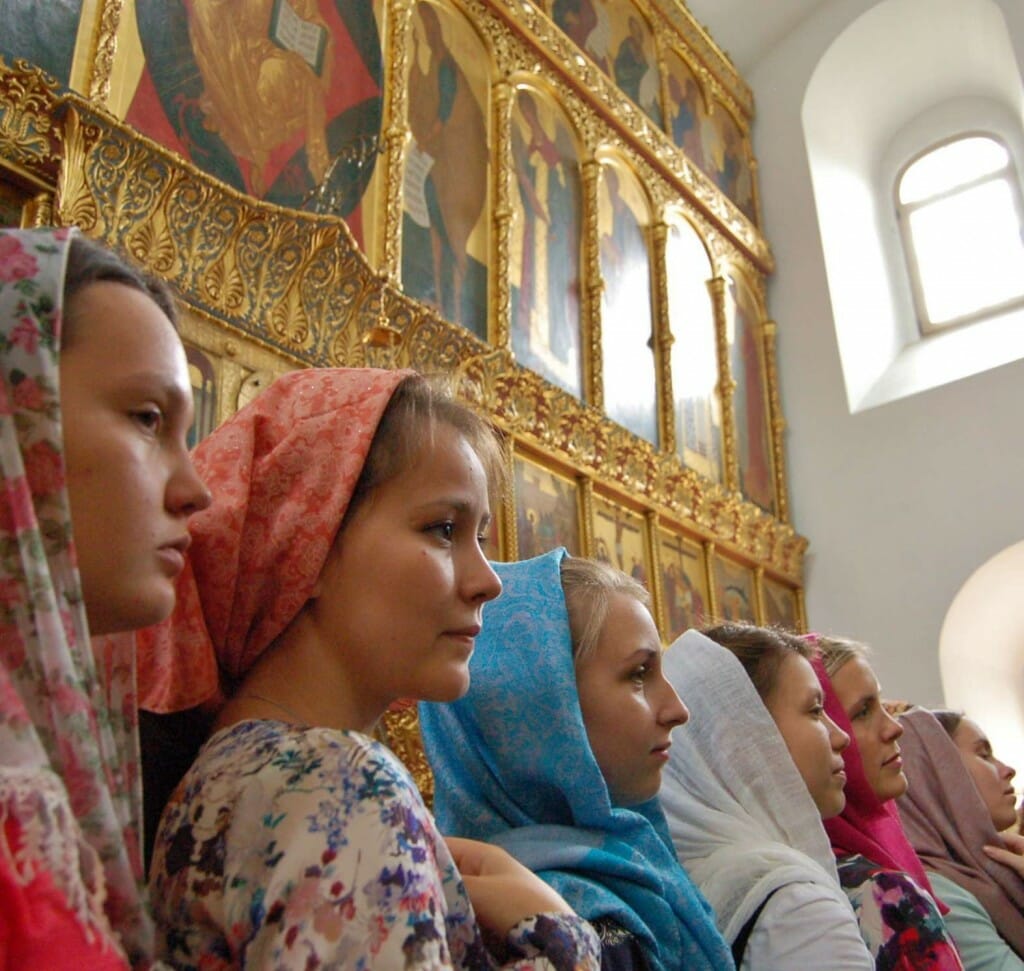 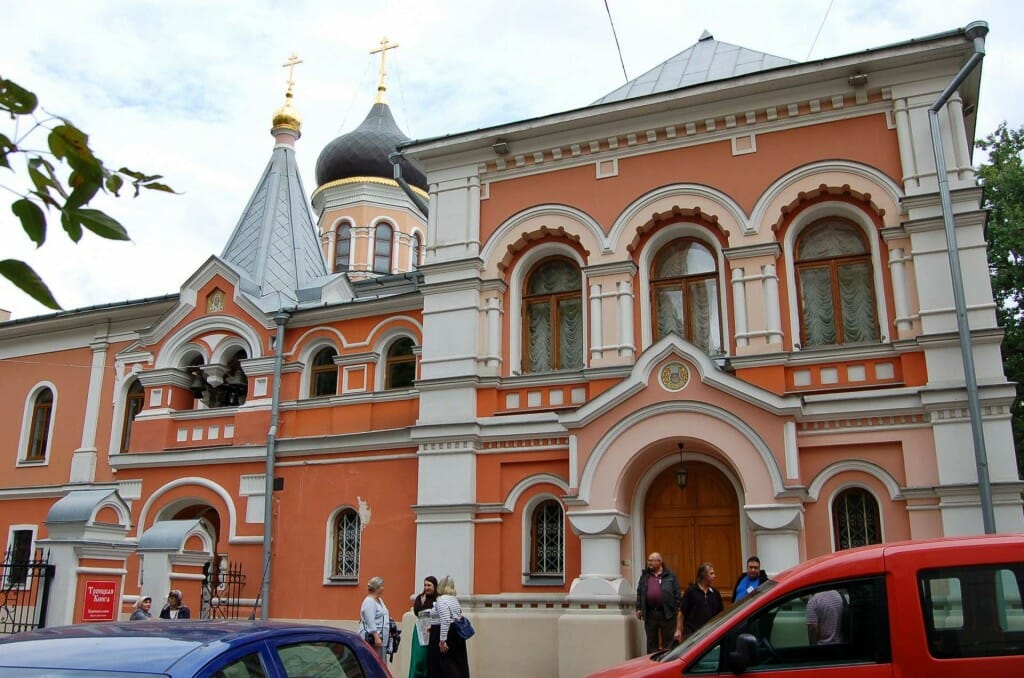 Rehearsals were held in the assembly chamber of the Podvorye. The building is adorned with mosaics of Saint Philaret, Metropolitan of Moscow, Saint Tikhon, Patriarch of Moscow, and Saint Innocent of Alaska, all of whom lived at this monastery. 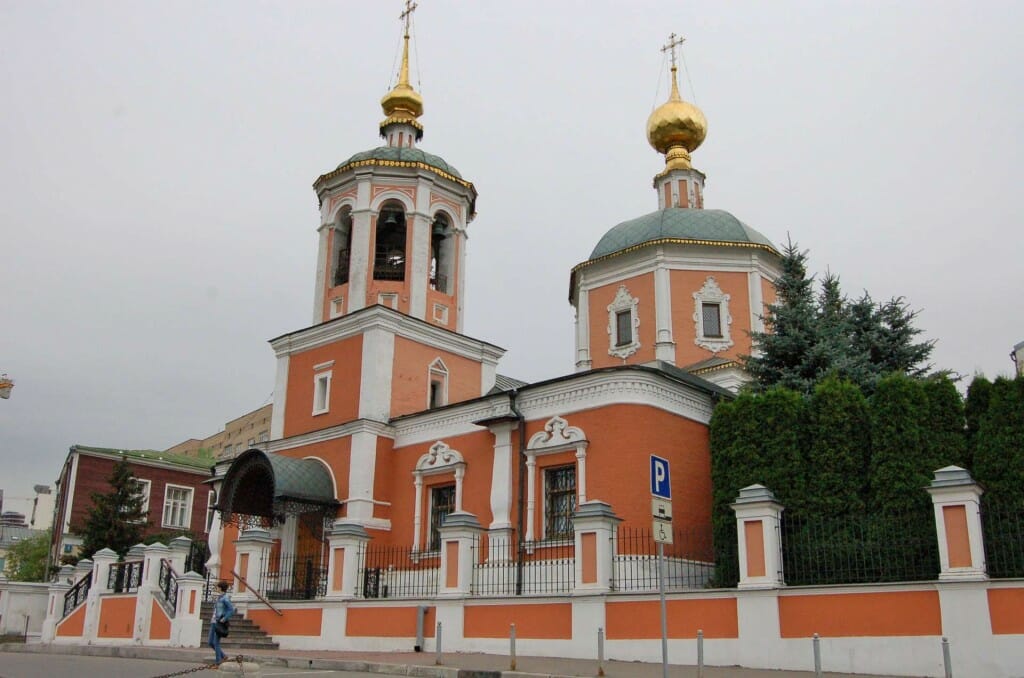 The main church at Podvorye. 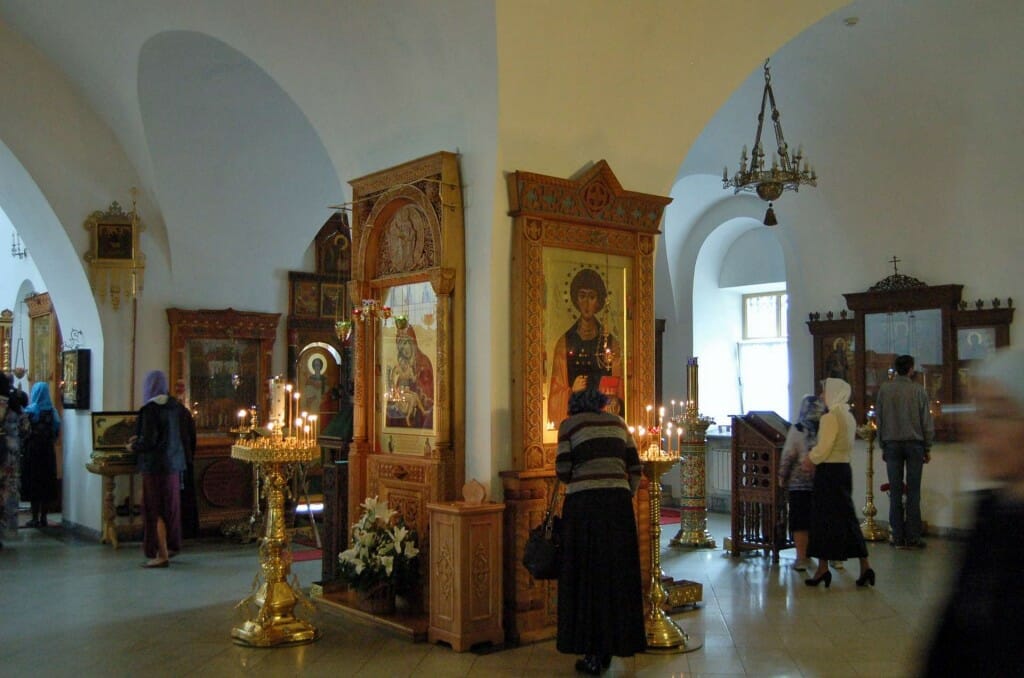 Inside the church after Liturgy. 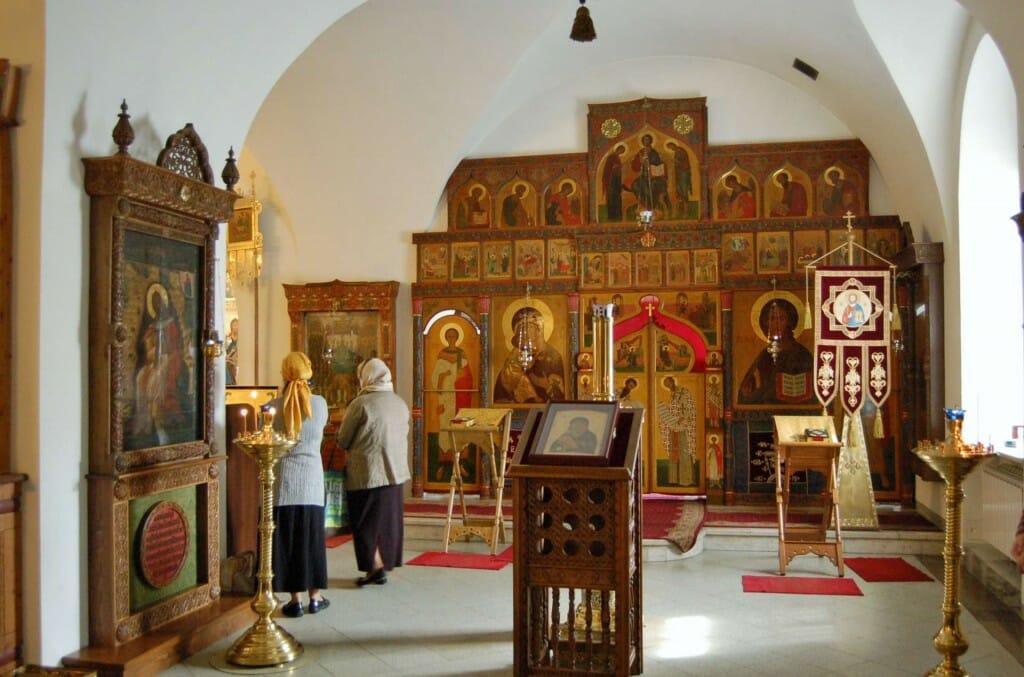 The Podvorye church is adorned with a particularly magnificent collection of icons, carved kiots, and other furnishings. 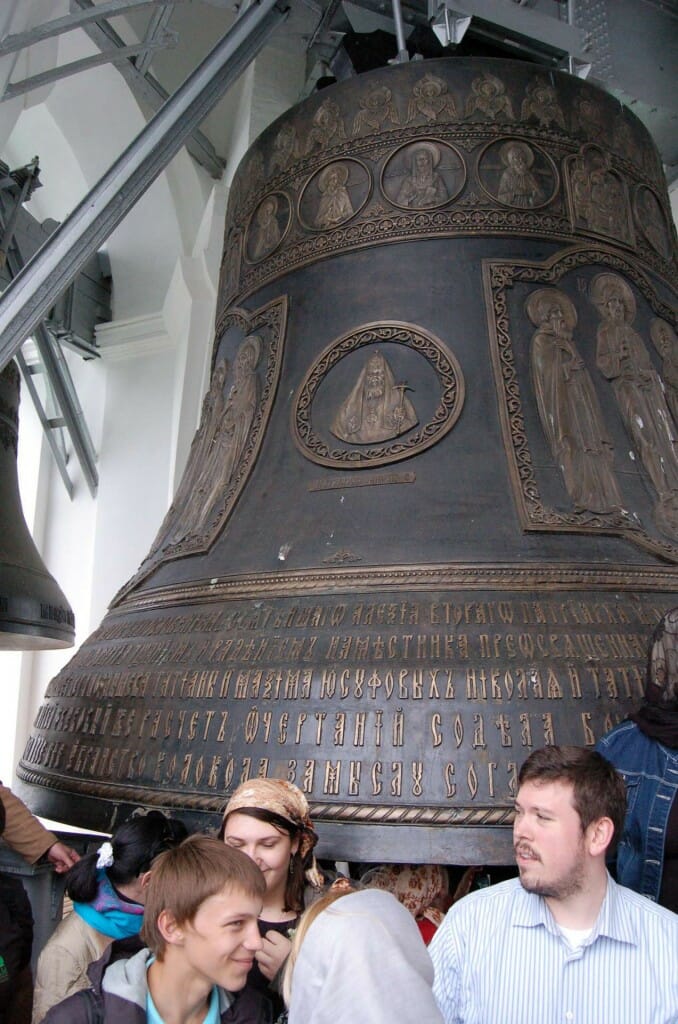 Visiting Holy Trinity-St. Sergius Lavra, we were granted rare access inside the immense bell tower. Here our group is standing under the largest bell in Russia. 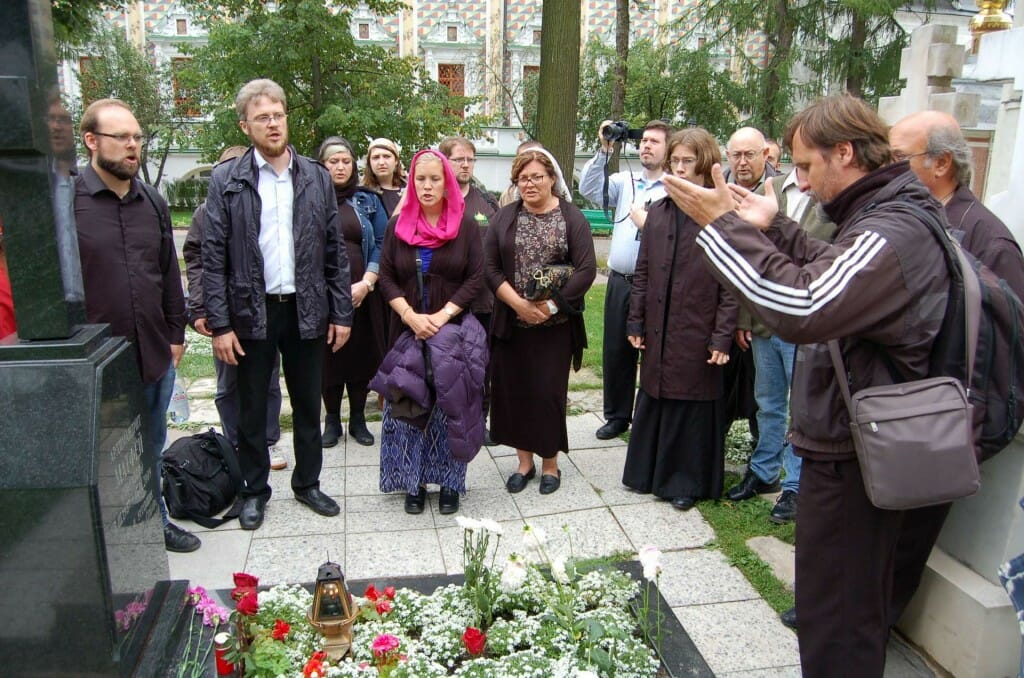 At the grave of Archimandrite Matfei – longtime conductor and composer at the Lavra. Maestro Gorbik led us in singing ‘Memory Eternal’.