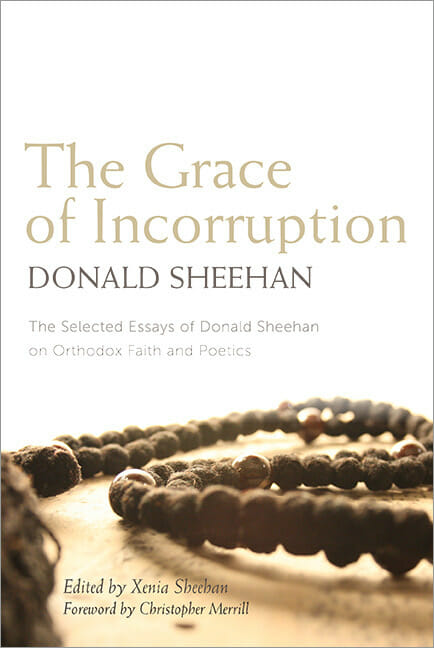 Editor’s Note: Donald Sheehan, whom I knew in the last years of his life, truly lived and breathed liturgical poetry. He awoke long before dawn and prayed the psalter for hours each day, developing a rare and profound linguistic and spiritual understanding of it. Ultimately, he wrote his own translation, The Psalms of David, which was published in 2013. His last book, The Grace of Incorruption, has now also been published. We are pleased to post this review written by professor of English Gregg W. Heitschmidt:

Donald Sheehan did not live to see his last work published. That publication we owe to his wife, who carefully edited both his collection of essays in Part I, and the in-process chapters in Part II, ably showing her husband’s meticulous mind—one carefully engaged in the process of living, both physically and spiritually. An obvious intellectual, scholar, and poet, these roles all inform his written work. What stands out in his writing is his strict effort to maintain a solid narrative bridge that allows readers to travel back and forth between the temporal and spiritual world. Initially grounding the reader in the spatial world, Sheehan recounts his trip to Tennessee, where, at the gravesite, he reads a letter and asks for forgiveness from his abusive father. The following morning he is spiritually awakened to the mysterious beginning, and mental repetition of, the Jesus Prayer, a powerful entreaty through which, by investigating its origins, he eventually discovers his new and true home in the Orthodox Church.

Sheehan’s understanding of his faith is expertly expressed in each successive essay/chapter, one building on the qualities of its predecessor: the penitential spirit of St. Ephraim the Syrian, also a poet concerned with reuniting man with God (repentance); the power of forgiveness and voluntary suffering as a means to love all mankind (regeneration); the abeyance of egoism and the power of humility and self-sacrifice to discover one’s true “personhood” in the Creator’s “Personhood” (reawakening); the alertness to God’s energies in His Creation and His Saints (reconnecting); “the false fullness of real nothingness,” or the dangers of (un)masking others before unmasking one’s self (reckoning); private darkness and the light of personal despair—the ignorance of knowledge and the knowledge of ignorance (revelation); and the resolve to conquer existential paralysis in the name of hope (rebirth).

In the second half of the book, Sheehan’s expertise as a scholar-poet, but mostly as a philologist, is most evident. Methodically, and with a hermeneutic exactitude, he traces the evolution of the 118th Psalm from its Hebrew origins to its Septuagint Greek translation—and even further, arguing that the Psalm’s uniqueness is its ability to absorb the nuances of every language, retaining its “poetics of resurrection” no matter the tongue. Sheehan’s claims are powerful and thoughtfully felt and articulated. Unlike the chapters in Part I, these require assiduous attention.  Whereas his voice and ideas are clear and consistently provocative in the first half of his work—especially poignant are his chapters about the power of repentance and despair, empathy and hope—his Orthodox poetics is philosophically challenging, quite often requiring the reader to wrestle with abstruse concepts and resolve difficult paradoxes that he long ago mastered. In fact, his linguistic and syntactic understanding of Hebrew, Greek, and English underscores most almost all of what he writes in these chapters. Like Alexander Pope, he is keenly aware of insisting upon poetry’s sound and sense, and particularly of King David’s theologically deep and mystically charged 118th Psalm; thus, he carefully and necessarily explicates the Psalm’s metrics, cadences, rhythms. Furthermore, he expounds upon the poetry’s chiasmic dynamisms and symbiotic profundities, insisting that in our psalmic prayer “we . . . trust in a coherence higher than any of our own intellectual conceptions of it.”

A graceful denouement to Sheehan’s philological explications, one that is both intellectually rich and spiritually deep, is his chapter, “The Drama of Intimacy.” Even more than in some of his earlier chapters, here his writing is powerfully felt, as he more carefully balances poetic exegesis with autobiographical accounts. Though he shifts between third- and first- person narration, the shifts are not stylistically awkward; instead, they artistically complement one another in such a way that the reader can more easily navigate Sheehan’s philologistic expertise than in earlier chapters. In fact, the author’s tacit allusion to his own “torment with spiritual depression (akedia)” makes his writing more dynamic, more synergistic, more psalmic.

Don Sheehan’s work, his essay into Orthodox poetics, is merely a beginning. It is this reviewer’s hope that other philologists, academics, poets, aesthetes, and writers, will, like Sheehan, commit themselves to the more exhaustive labor of poetic exegesis and linguistic analysis. Further expertise will be necessary to expound not only upon other psalmic profundities, but other biblical texts, too.

Yet Sheehan’s work is by no means solely academic. Part I of The Grace of Incorruption is an invitation to deep introspection, both intellectually and spiritually.  As the Blessed Elder Joseph the Hesychast maintained, the Socratic maxim to “know thyself” was a requirement for repentant individuals to constantly reflect upon. In doing so, they would—with God’s energizing grace—work to rid themselves of their “animalistic self-will (i.e. dianoia)” and replace it with “a pure heart,” like the one King David sought. With a purified heart, a humble disposition, and a rarefied nous, men and women would more readily recognize the “Kingdom of Heaven” within them and work, as Elder Thaddeus suggests, to “filter the atmosphere on earth and expand the atmosphere of the Kingdom of God” (Our Thoughts Determine Our Lives, 66). Once “the flowers of divine illumination take root in the good soil of our souls,” the blessed state of harmony between God and man can be restored, and, through the incarnate and resurrected Christ, “true personhood” achieved. It is this personhood, Sheehan notes, that “is, always, genuinely beautiful.” May the memory of Donald, Donatos as I briefly knew him, be eternal, and may the beauty he so earnestly sought be magnified in his soul. Glory be to God for all things. 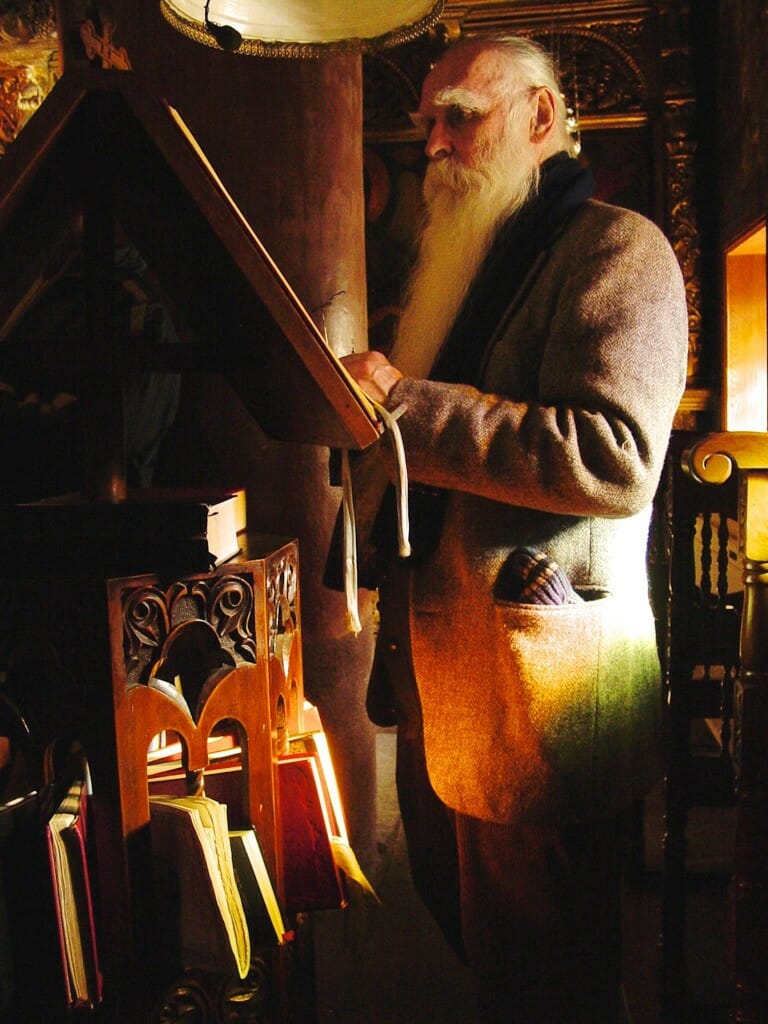 Donald (Donatos) Sheehan standing at the reader’s stand at the Monastery of Giromeri in Northern Greece.