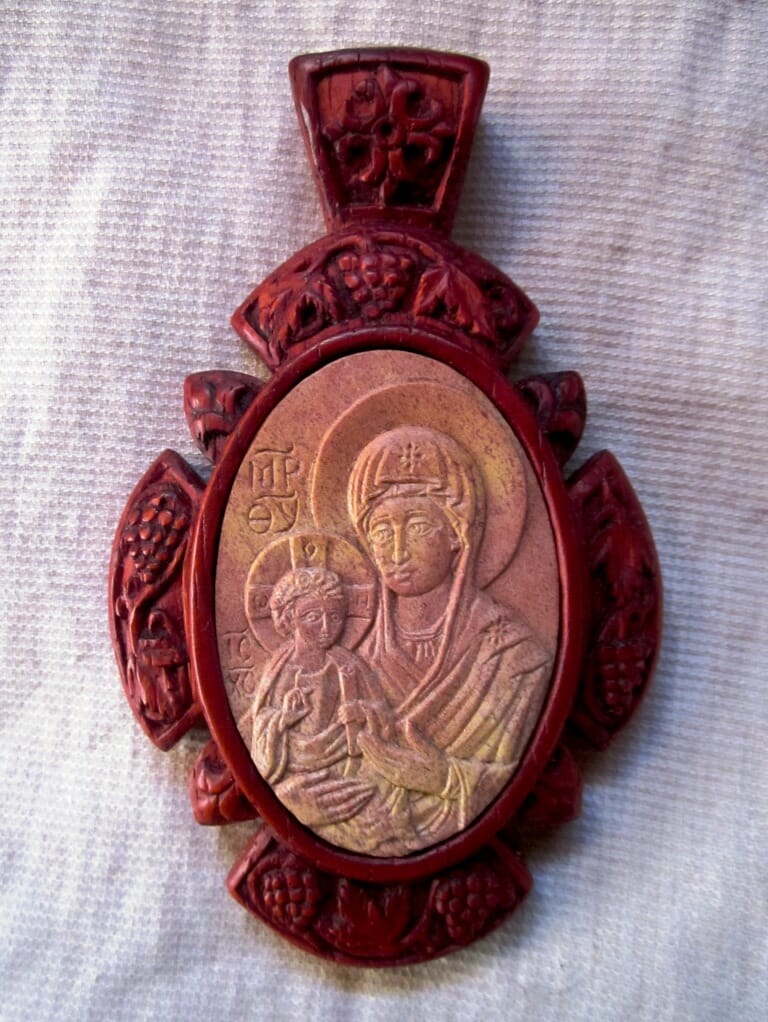 I was recently asked by a young student of St-Vladimir’s Seminary to make a Panagia which he wanted to give to his bishop.  This student is of Indian background and a Syrian Orthodox.  I have always been fascinated by Orthodoxy in India,  the stories of St-Thomas, the link with Nestorian Christianity and also their long being cut off from communion with other churches. 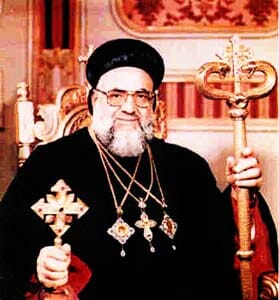 In our conversations, my client explained how most earlier Orthodox traditions, iconography and architecture were wiped out as the Portuguese attempted to to impose Latin Catholicism on the Indian Christians.  This has left a wake of Baroque churches with gaudy interiors and western imagery.   My client said there are a few theologians looking to renew a more authentically Indian version of Orthodox Christianity.   In the light of these comments, I decided to put some extra energy into adding my little drop to the efforts of restoring an Indian Christian Iconography.

The frame, carved in paduk wood, was designed around the usual eight-pointed crosses one sees Syrian bishops wearing.  My client sent me images of the vestments worn by clergy, which are ornamented by grapes and vines, and so that became the basis for the ornamentation of the frame. 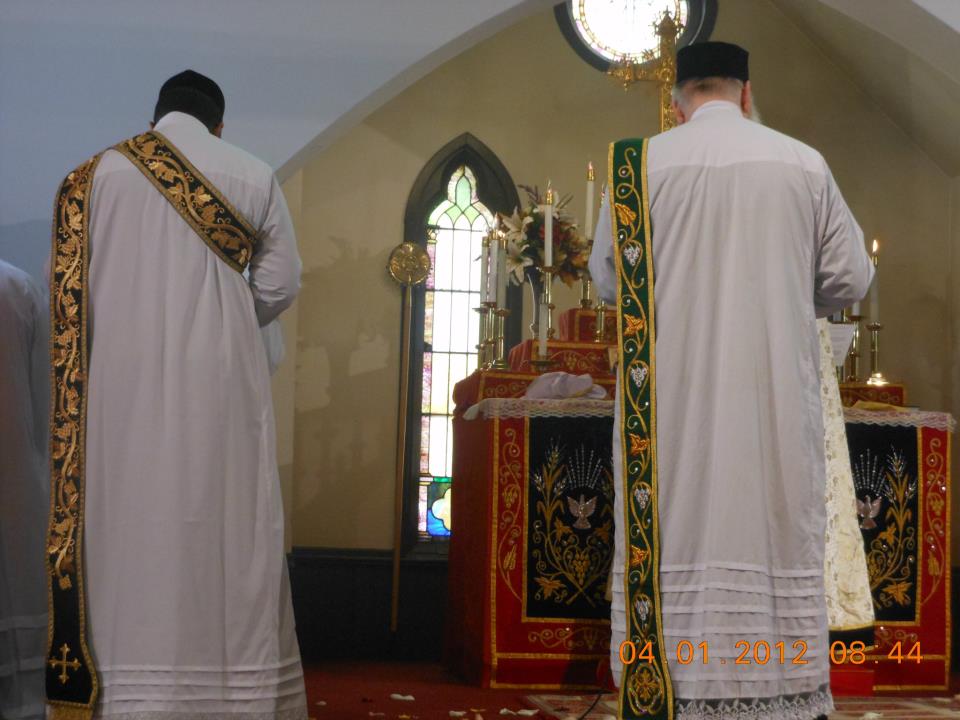 Two examples of ornamentation on vestments for a deacon and a priest.

I had noticed that many of the Indian churches were using the neo-coptic iconography on their website and so I began by looking at early coptic carving to see what I could take from there.  For certain, I was convinced I should make the image more hieratic than what I usually carve.  One of the points my client insisted on was the particular way in which their clergy blesses with his hand and so I tried to reproduce that gesture in the hand of Christ.

But for the overall style of the image I began by looking at the wonderful Syriac manuscripts which influenced and were influenced by Persian miniatures.    There are even fascinating images of Syrian-Mongolian iconography which were interesting to explore. 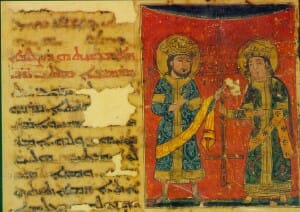 Syriac illumination of Constantine and Helen 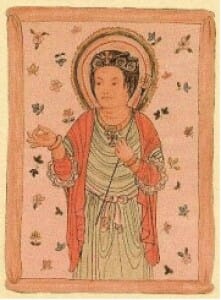 But still, I felt there was something missing, for although linked to other Syrian Christians, the “Church of St-Thomas” has a history and identity of its own.  I noticed that one of the main accusations against Indian Christians brought about by the belligerent Portuguese had been how they had too many resemblances with Hinduism, in their customs, rituals, etc., reason for which they attempted to make Indians into Baroque Latin Rite Catholics…  and so at this point I decided to plunge rather into Indian Art, gathering hints and forms that could complement traditional Christian iconological forms without clashing with them.    I did not want to be too explicit, but only give the image a flavor of its link to Indian culture. 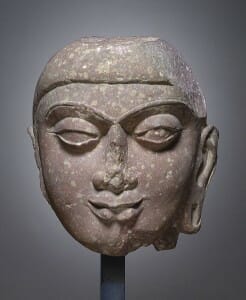 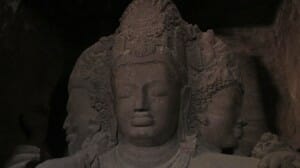 11th century image of Shiva from the Elephanta Caves

What I took into the image was a rounder face, heavier eyelids and slightly upturned lips, like a subtle smile.  Personally I am quite happy with the final result and truly enjoyed embarking on this journey to make the light of Christ visible in all its variations, but others can tell me if I have succeeded or not! 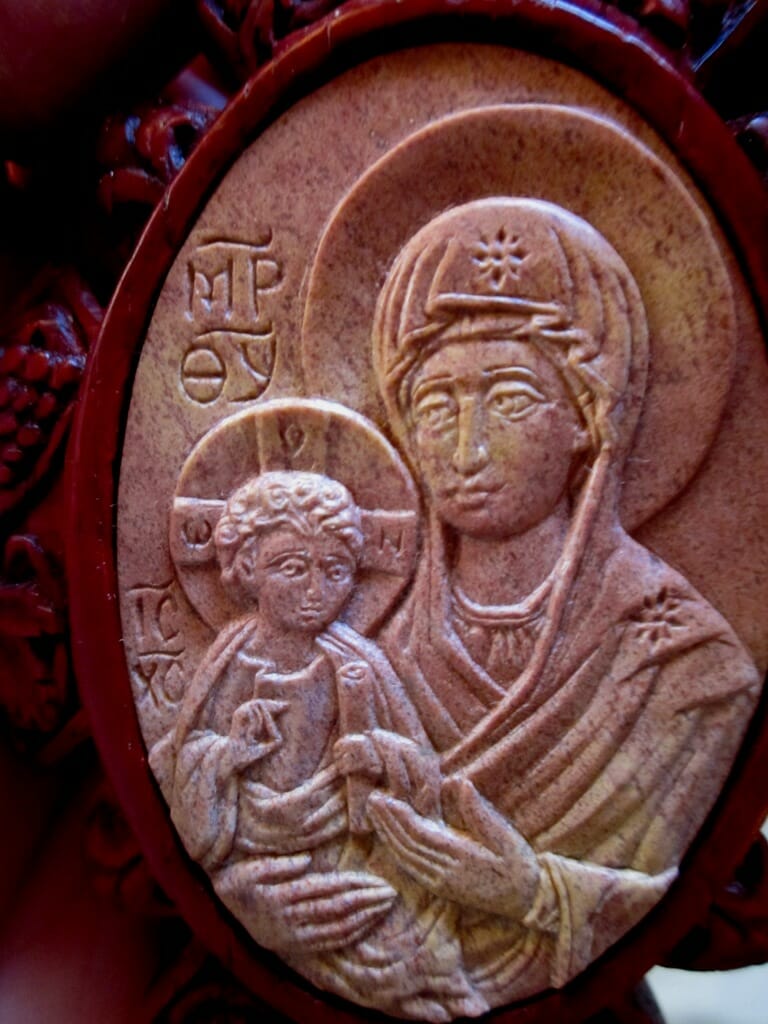 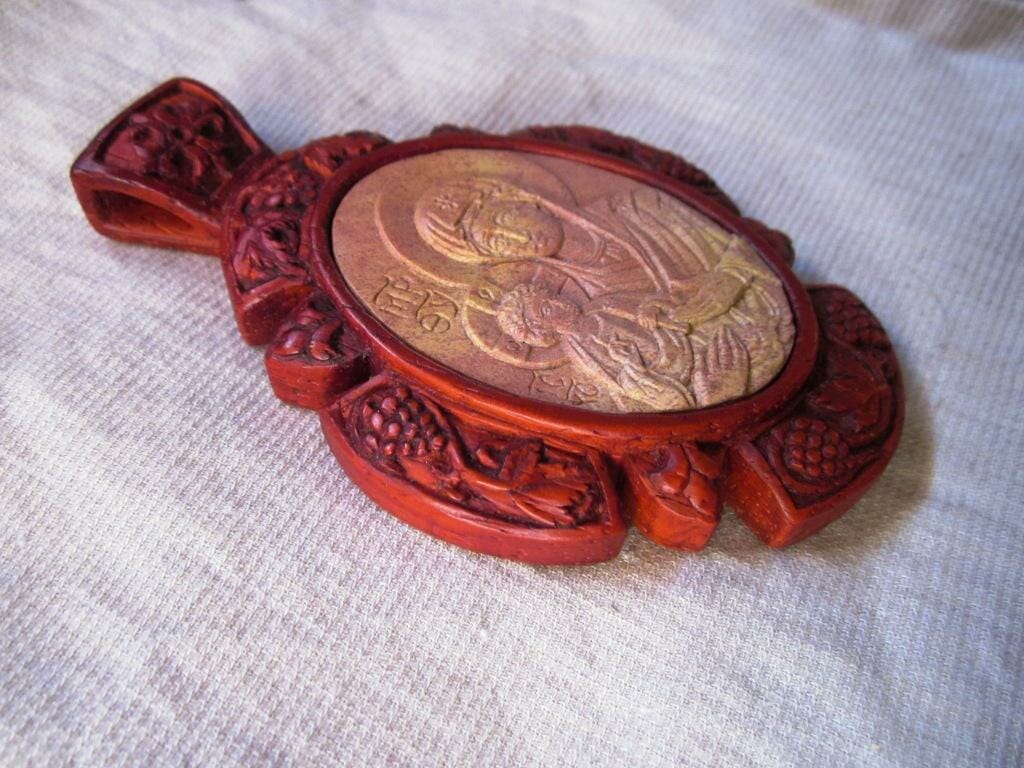 Side view of Panagia