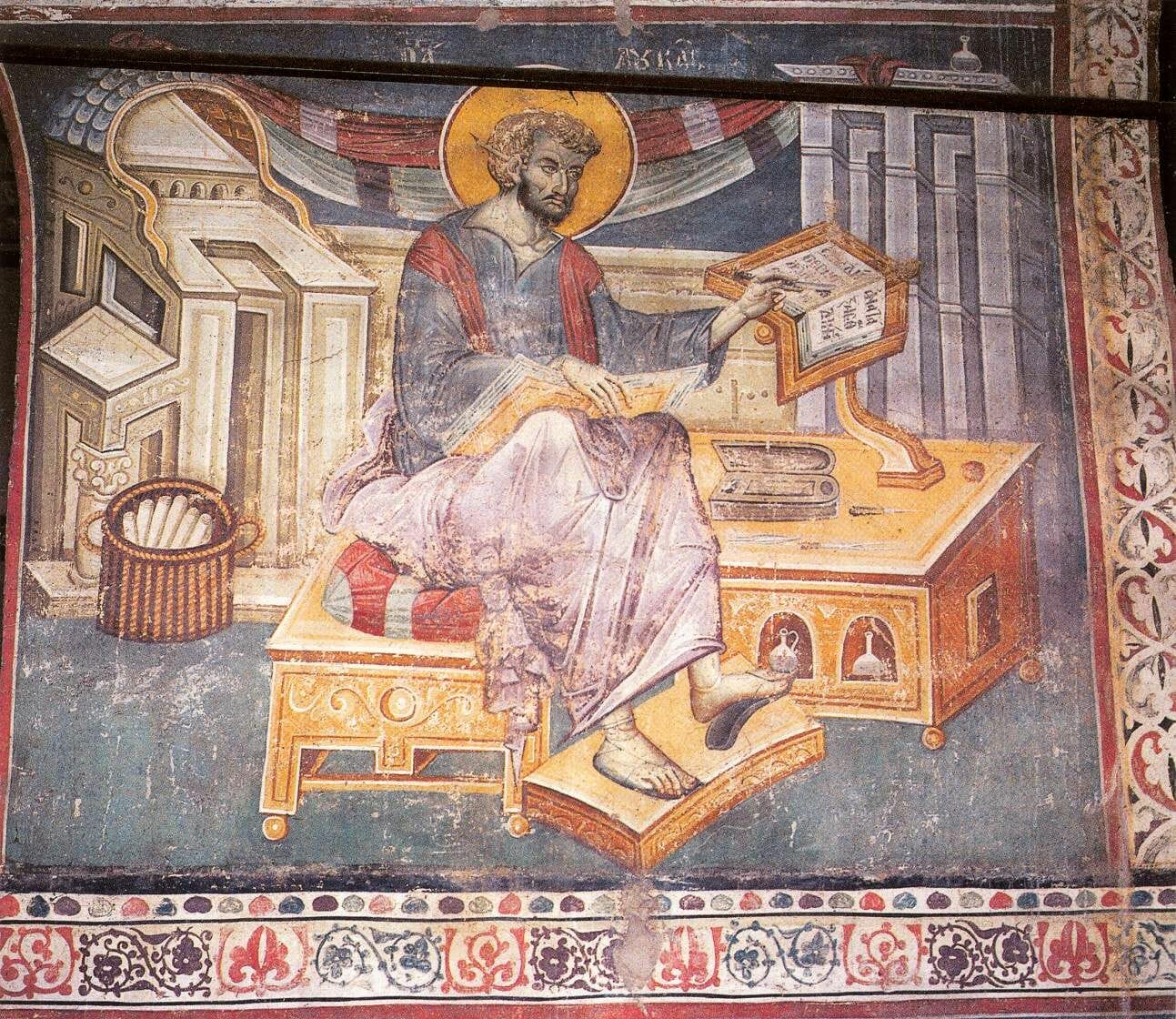 On the Need for the New Paradigm

First, the suggested shift in paradigm is not just playing with words, nor is it merely for amusement or for increasing our vocabulary. Neither are we following some fashionable intellectual trend. From the conventional meaning of the term paradigm, I would emphasize its ‘active’ semantic aspects. These suppose that the model directly influences something. If we approached paradigms from this perspective, this would mean that the purpose of a canon— as is frequently used to denote the truthfulness of church art—cannot be interpreted as merely one technical term among others that is introduced to facilitate communication among experts, or to complicate communication with non-experts. After considering what has been said about the notion of canonicity at the outset of this discussion, the word canon becomes a true example of an ‘actively’ paradigmatic term. 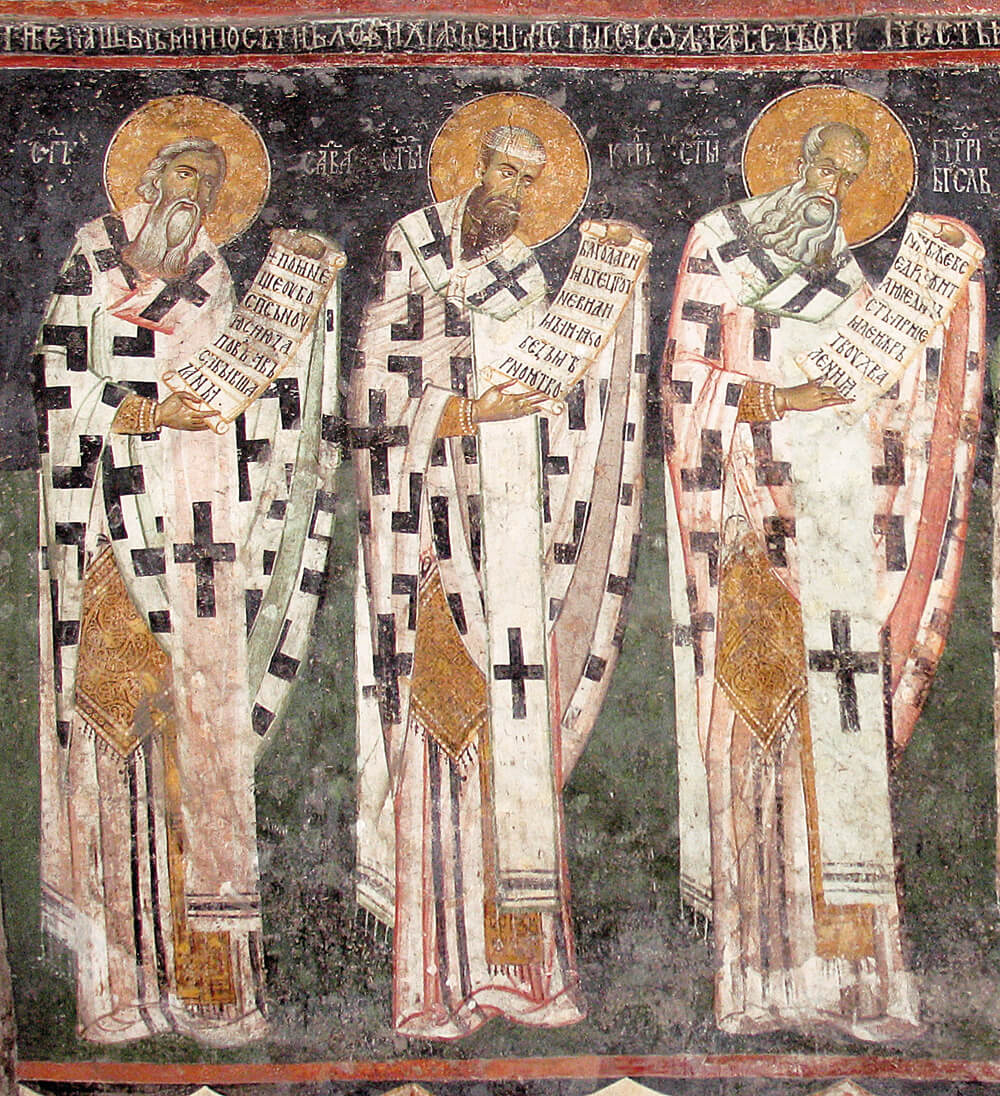 To be more theoretically precise, saying that an “icon is canonical” could be cited as a typical example of a “conceptual metaphor” in the terms of “Cognitive Linguistics,” at the end of 20th century. Namely, the famous Lakoff-Johnson research, from the 1980’s, Metaphors We Live By, reflects the fact that concepts that define our cultural behavior are not just abstract structures. Rather, they are followed by richly picturesque cognitive material, which the authors have called “conceptual metaphors.”  This kind of imagery, of course, is not merely a neutral backdrop for our cognition and our concepts. Instead, whether consciously or not, it radically influences them.  Let us use the authors’ words to illustrate this thesis, by the most typical example, which opens their study: “To give some idea of what it could mean for a concept to be metaphorical and for such a concept to structure an everyday activity, let us start with the concept argument and the conceptual metaphor argument is war. This metaphor is reflected in our everyday language by a wide variety of expressions: …/ He attacked every weak point in my argument; His criticisms were right on target; I demolished his argument; I’ve never won an argument with him; You disagree? Okay, shoot!; If you use that strategy, he’ll wipe you out; He shot down all of my arguments. / It is important to see that we don’t just talk about arguments in terms of war. We can actually win or lose arguments. We see the person we are arguing with as an opponent. We attack his positions and we defend our own. We gain and lose ground. We plan and use strategies. If we find a position indefensible, we can abandon it and take a new line of attack. Many of the things we do in arguing are partially structured by the concept of war. Though there is no physical battle, there is a verbal battle, and the structure of an argument—attack, defense, counterattack, etc.—reflects this. It is in this sense that the ARGUMENT IS WAR metaphor is one that we live by in this culture; it structures the actions we perform in arguing.”[i] 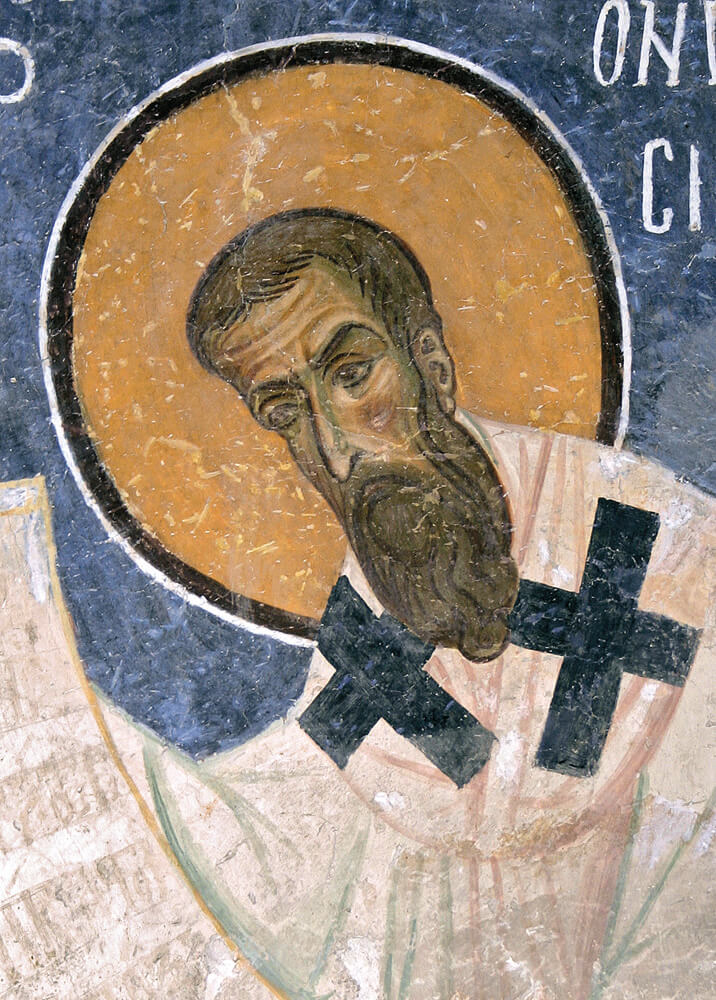 Among numerous examples listed in this study, one might be quite illustrative in our present discussion.  It is a cluster of conceptual metaphors which attach a visual dimension to ideas: “[1] understanding is seeing; [2] ideas are light-sources; [3] discourse is a light-medium.” Imagery which demonstrate those (three) interconnected conceptual metaphors can be found in typically used phraseology, such as: “I see what you’re saying; It looks different from my point of view; What is your outlook on that?; I view it differently; Now I’ve got the whole picture; Let me point something out to you; That’s an insightful idea; That was a brilliant remark; The argument is clear; It was a murky discussion; Could you elucidate your remarks?; It’s a transparent argument; The discussion was opaque.”[ii] Once again, it is obvious that the metaphorical layers radically influence our way of thinking and behavior. If we try to imagine behind our ideas images of projectiles, behind understanding image of explosion and behind discourse image of machine gun, or—let us rely again on the authors—if we try to “imagine a culture where an argument is viewed as a dance, the participants are seen as performers, and the goal is to perform in a balanced and aesthetically pleasing way,”[iii] then we will grasp (by the very impossibility of thinking in such a manner) how radically our culture is defined by the conceptual metaphors standing behind our concepts. Or else, if we conclude the short presentation of this research with its strongest claims, we will realize that: “human thought processes are largely metaphorical” and that the “human conceptual system is metaphorically structured and defined.”[iv] 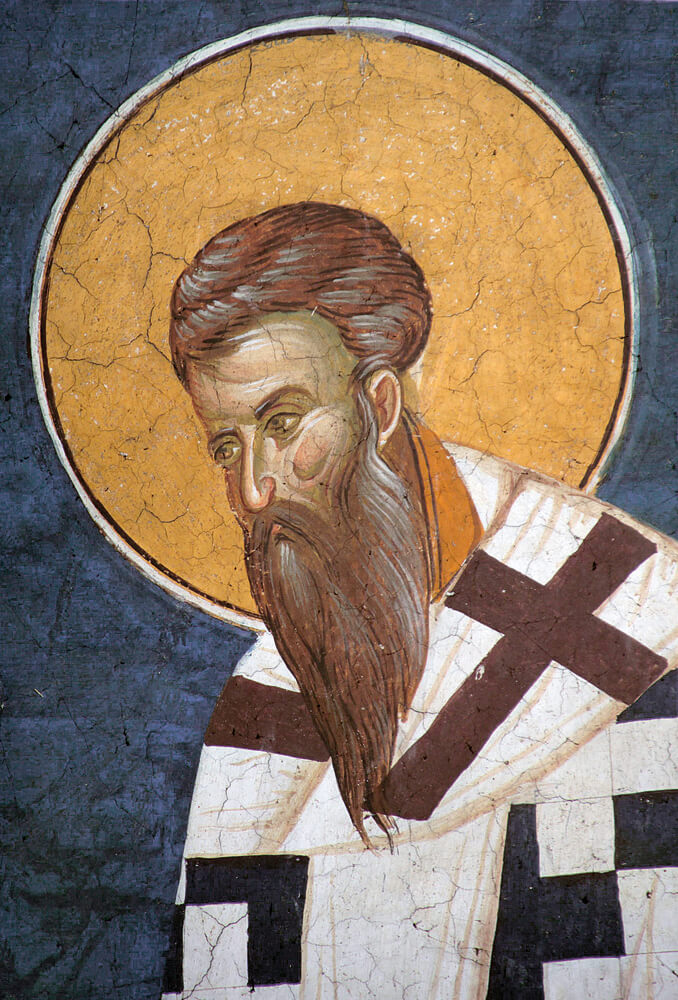 While we should probably search for the origin of the listed examples of conceptual metaphors in the deepest layers of our culture—in the Greek agonistic spirit or in the dominance of visual cognitive models in the Greco-Roman civilization, for example—the metaphorical attachment of the notion of “the list of rules” to the concept of icon seems to be a more recent phenomenon, with an obscure motivation and an equally obscure outcome. Since there is no solid reason to trace it back to the Byzantine past, it can be probably found in the contemporary misunderstanding of how ancient pedagogical manuals were used.  What is not obscure, now, is that this kind of metaphorical attachment is neither innocent nor irrelevant. It then becomes clear that when we say an “icon is painted according to the canons”, or simply that an “icon is canonical”, without reflection, we accept the much broader metaphorical background. This radically affects how we relate to icons. Furthermore, if this kind of phraseology is used frequently enough, as in contemporary ecclesiastical culture, then it is clear that the word canon is not just a quiet follower of contemporary church art, adding an antique flavor to how we speak about icons. Rather, it is a hidden force that strongly influences all actors on this artistic scene. 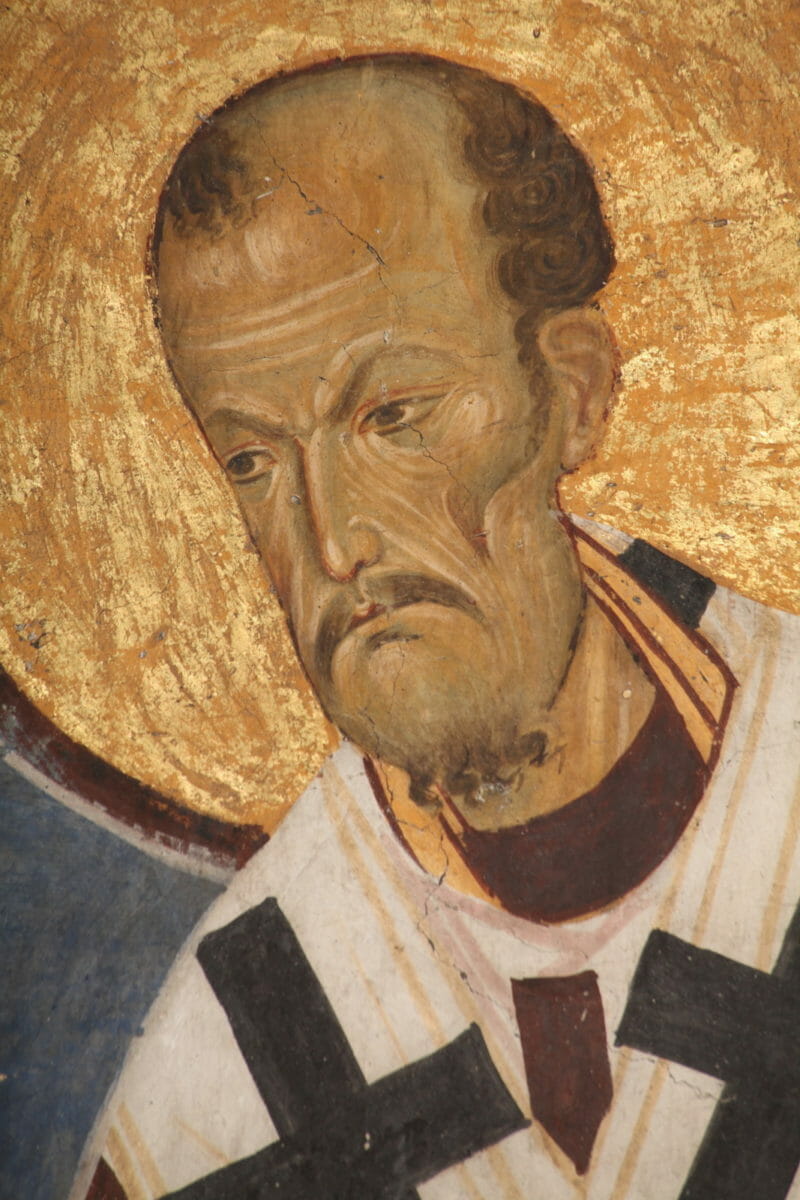 If, then, the concept of renewal of medieval style in church art is overshadowed by the image of canon—typically assuming a set of algorithmic rules that define the production of icons—we will then arrive at the murky results described at the outset of this discussion. In other words, put it in the terms of Cognitive Linguistics: if the concept of “icon” (not just the painted image itself, but an entire cognitive concept surrounding it) is that an “icon is painted according to the list of rules”, then we will find ourselves in the situation described above. More pragmatically, asking the initial question, “Are those icons painted according to canons?”, means accepting a single predefined image of art, which subsumes exactly what Didron was saying about medieval (“Greek”) art: “The painter is bound by tradition as the animal is by instinct. He executes a figure as the swallow builds its nest, the bee its honeycomb.” Adapted to a contemporaneous urban terminology, which is certainly closer to the contemporary neo-byzantine artist, Didron’s spell could be, finally, most expressively refashioned in the following manner: “the painter is a kind of administrator, who does his job solely according to firmly established standards, norms and procedures.” 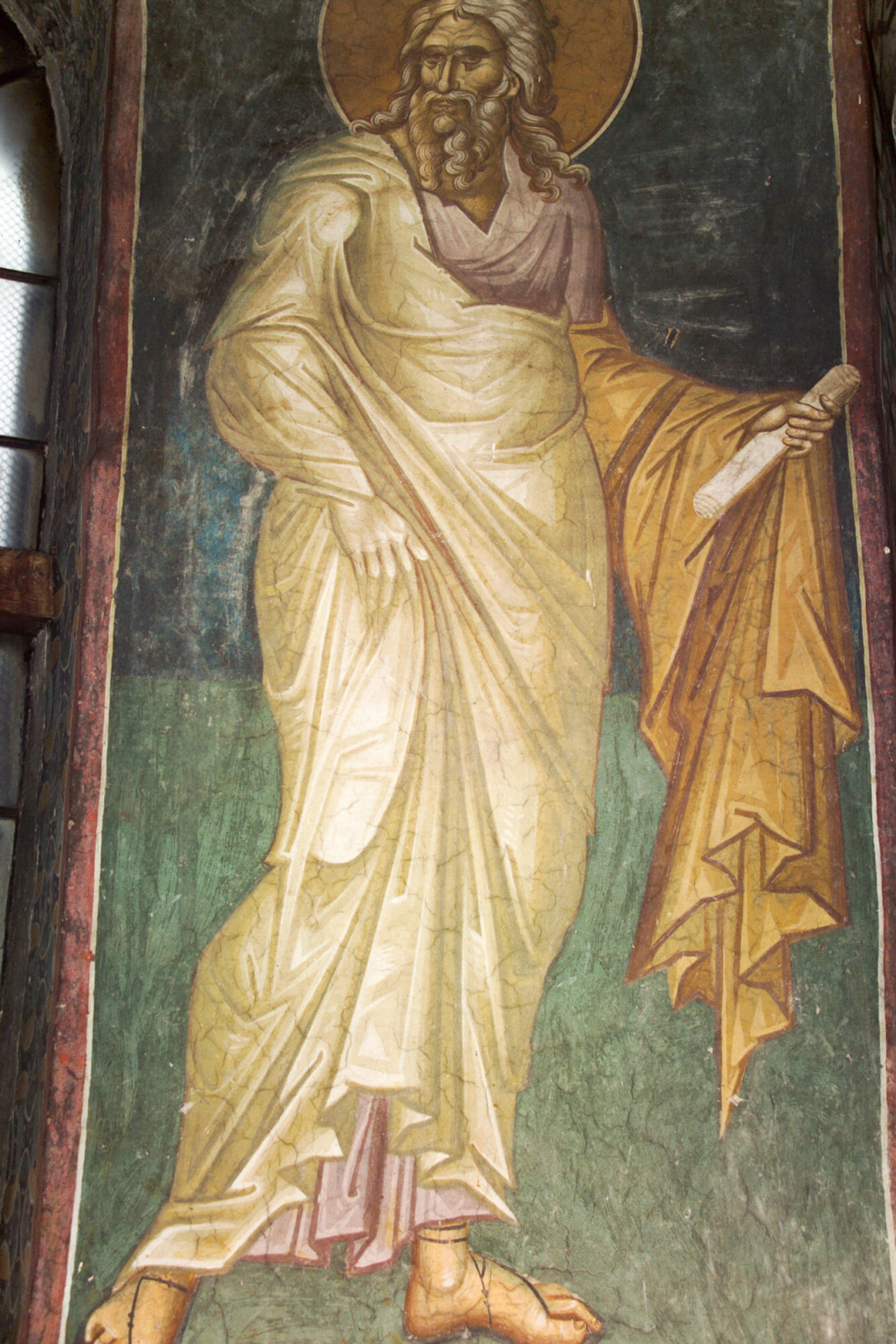 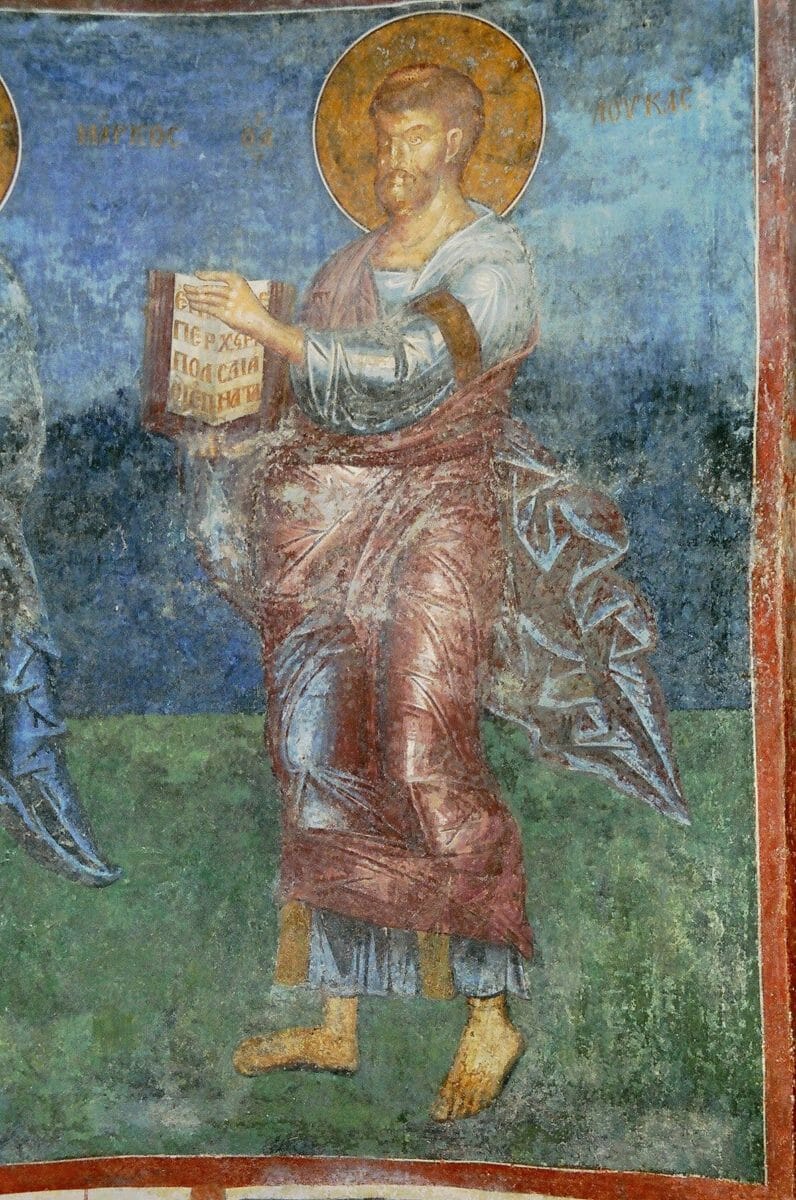 St. Luke the Evangelist, the monastery church of St. Andrew at Matka in Skopje’s municipality of Karpoš, 14th century.

Of course, I would not be writing this, if I believed that this metaphorical curse is the final word on contemporary church art. Developments seen by the end of the 20th and the beginning of the 21st century strongly suggest that this type of framework is already too constraining for contemporary church art.  It seems that both painters and theologians are increasingly open to the idea that the art of icon painting could offer more to the world than closely following some administrative formularies. Moreover, it is ever more apparent that, if this art claims to maintain a real connection with its own tradition, the very idea of administrative formulary should be decisively abandoned. Since it is hard to imagine that this kind of semantic charge in the notion of canonicity could be re-conceptualized (in terms of its actual “artistic” use), and restored to the meaning it had throughout early Church history, then the paradigm shift seems to be the most plausible option. 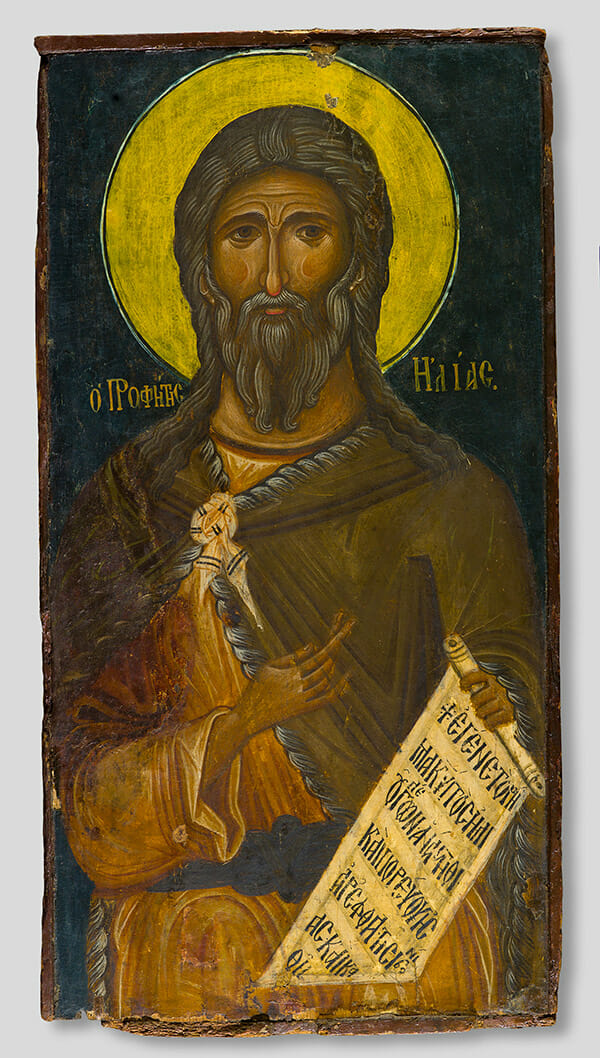 Counting on the growth of the (positive) trends found on the background of the (negative) wider image described earlier, we can now propose, in a more concrete and rational manner: what if we exchange the dominant but malfunctioning conceptual model of “painting according to the canons” for the concept of “painting according to the language of church art”?  Or more concisely: can we change the initial question of this essay, “Are those icons painted according to the canons?” to “Are those icons painted in accord with the language of church art?” If we did this often enough, would this finally open up a possibility for the shift in paradigm? Based on what has been said here, I can answer in the affirmative. In church art, the metaphors we attach to our concepts are significant and highly influential. If this change occurs, the way future generations approach church art may radically change. After all, exchanging the redundant metaphors based on a set of rules, for something based on artistic language, which [1] truly exists, [2] has its rules/tradition and [3] gives space for personal expression—all at the same time—actually seems like an opportunity that should not be missed. Moreover, this kind of change could finally set the stage for developments towards reaching the artistic and theological expressiveness that was achieved by medieval Byzantine art in its own historical context. This also means that the ecclesiastical and artistic, traditional and creative, collective and individual, aspects of contemporary church art could become not only better balanced, but radically enriched, as well. 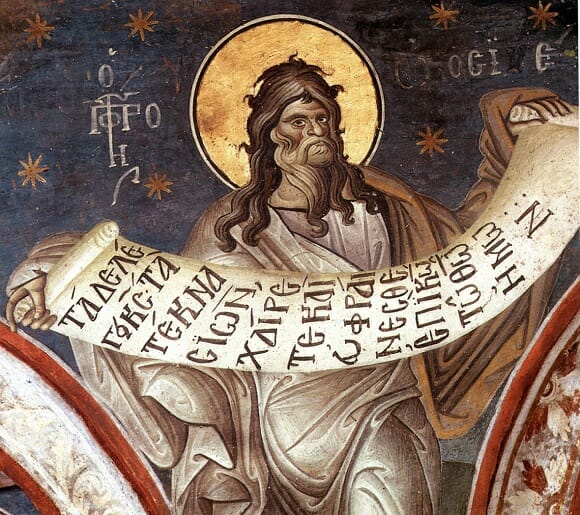 [i] George Lakoff and Mark Johnson, Metaphors We Live By, The University of Chicago Press, London 2003, 5.